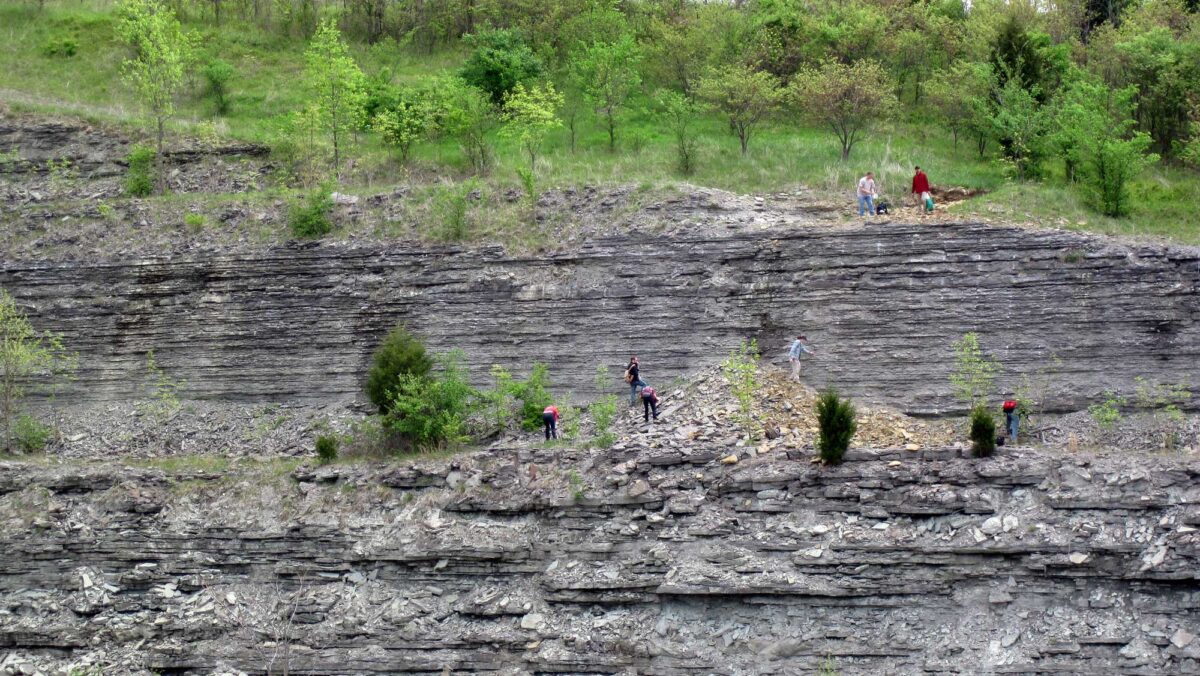 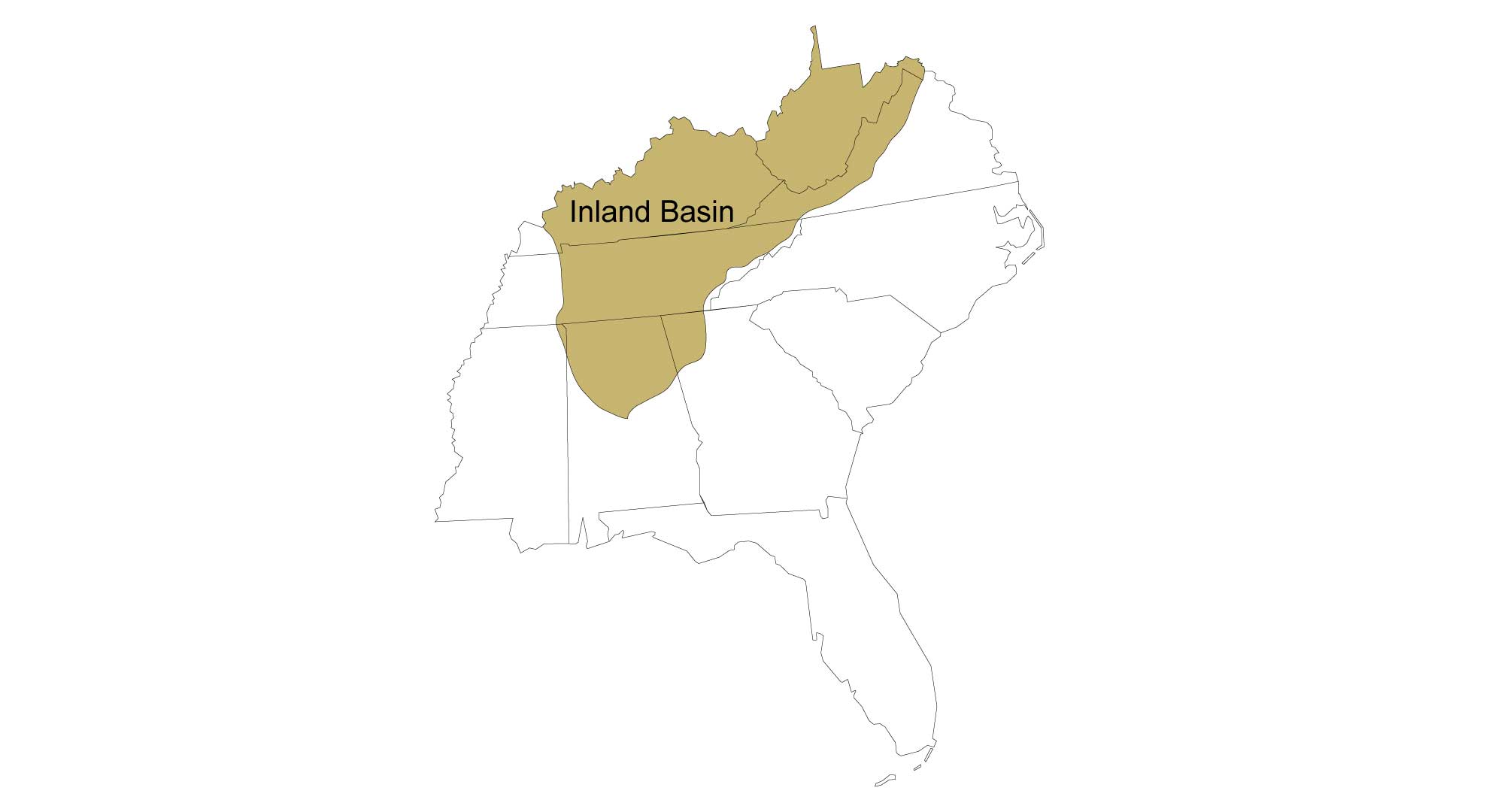 Area of the southeastern United States occupied by the Inland Basin physiographic province, which includes all of West Virginia, much of Kentucky and Tennessee, and portions of northern Georgia and Alabama.

The Inland Basin is a large geophysical province that extends over much of the central and Southeastern U.S. and includes includes all of West Virginia, much of Kentucky and Tennessee, and portions of northern Georgia and Alabama. Inland from the mountain-building events that occurred throughout the Paleozoic, the Earth’s crust was buckled (downwarped) into a series of depressions called "basins" that give the region its name 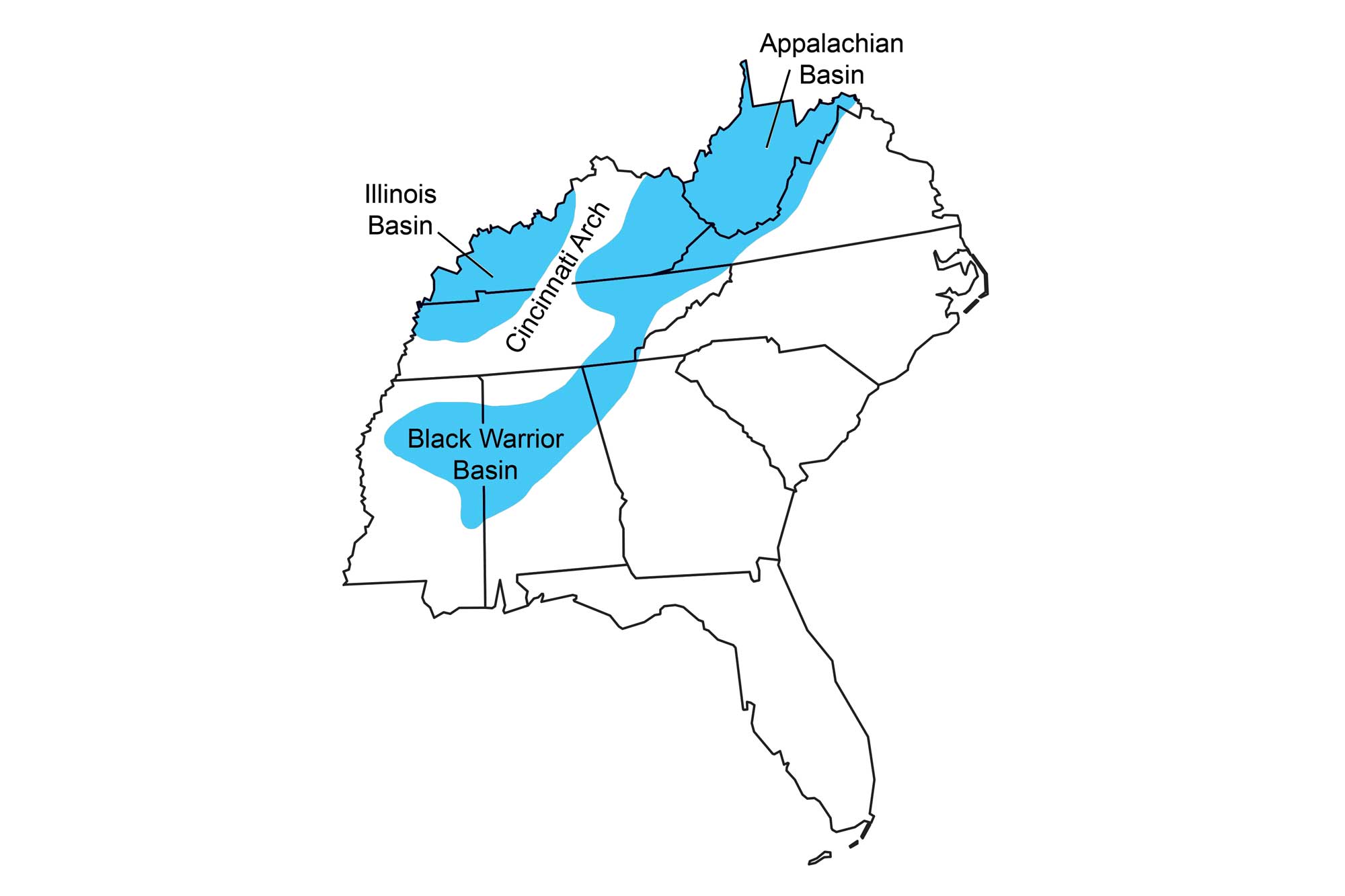 Sedimentary basins of the Southeast, separated by the uplifted Cincinnati Arch.

There are two major basins in the Inland Basin region—the Appalachian and Illinois basins—separated by the Cincinnati Arch and its branches. Other, smaller basins have existed throughout the region at various times through geologic history. One notable area of deposition is the Black Warrior Basin of northern Alabama and Mississippi (at the southern tip of the Appalachian Basin), which is a particularly important area for fossil fuel production.

Since the Inland Basin was not at the center of the tectonic collisions that occurred during the Paleozoic, there are almost no igneous intrusions exposed at the surface, and the rocks here were not metamorphosed as they were in the Blue Ridge and Piedmont region. The easternmost section of this region, however, called the Valley and Ridge, was squeezed into tight folds during the Taconic, Acadian, and Alleghanian orogenies. The Appalachian Plateau, the central section of the Inland Basin, was broadly folded as the effects of mountain building decreased to the west (away from the collision). In contrast, the westernmost section of the Inland Basin, known as the Interior Low Plateaus, was minimally affected by orogenesis during the Paleozoic.

The Inland Basin is dominated by sedimentary rock thanks to its low topographic relief; basins are naturally excellent places for the preservation of thick sediment layers because they easily collect sediment and often subside from its weight. The rocks of the Inland Basin, including conglomerate, sandstone, siltstone, shale, limestone, and dolostone, reveal the changing depositional environments of the inland sea as it advanced and retreated repeatedly throughout geologic time.

Following the Precambrian Grenville Orogeny, global sea level began to rise, until most of North America was covered by a shallow inland sea. A period of erosion gradually wore down the Grenville Mountains, and their weathered sediments were carried westward and deposited into the Inland Basin. As the sea widened, sand and mud were deposited near shore, while organically derived carbonates including limestone and dolostone formed in deeper water. Gradually, the amount of sediment settling into the basin declined as the mountains were weathered down. Sea level remained high through the Ordovician, but the reduced sediment supply resulted in the formation of more limestone and dolostone, which are common in warm, shallow, sediment-starved seas. These widespread carbonate rocks are thousands of meters (feet) thick in Kentucky and Tennessee. 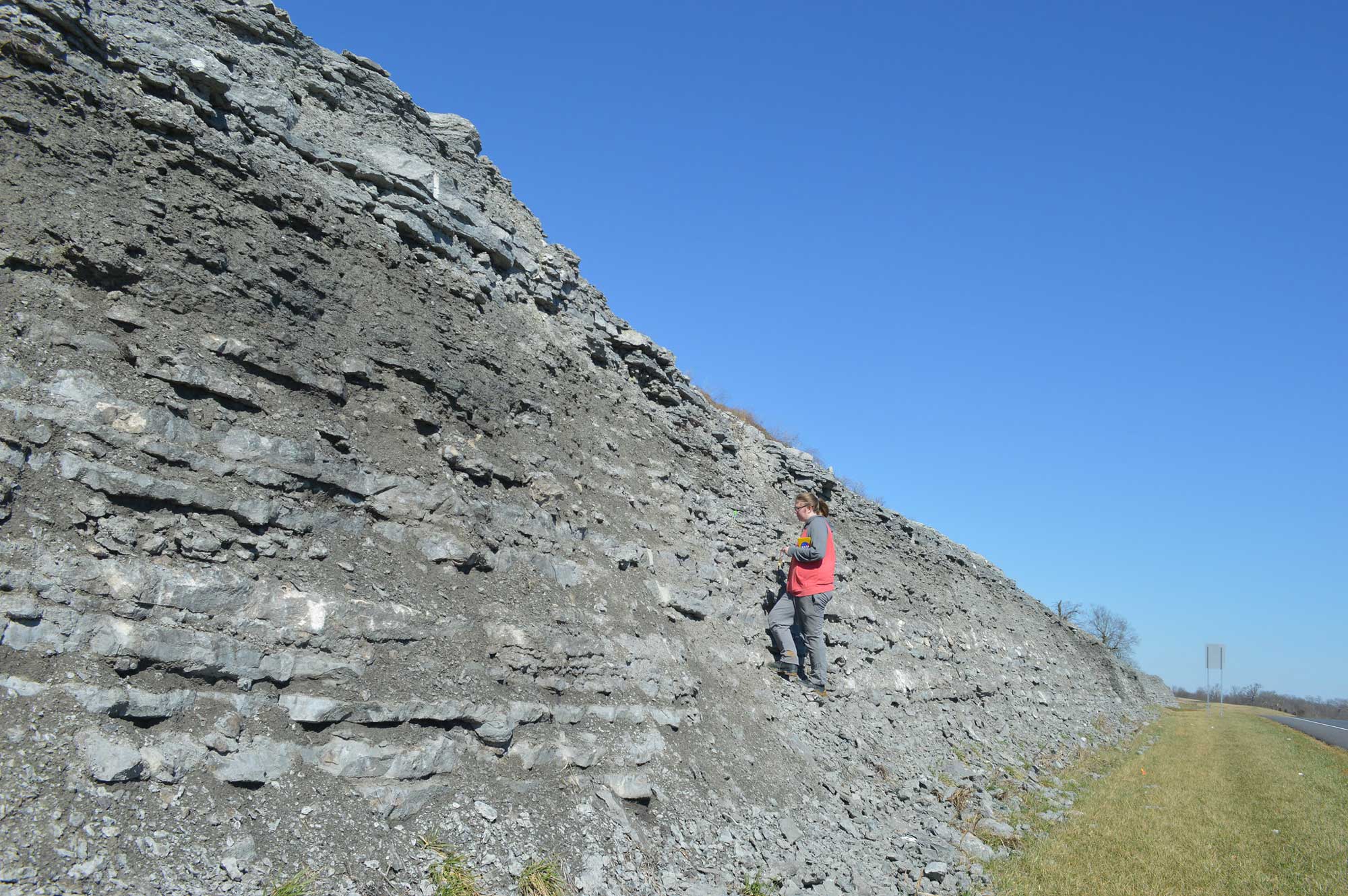 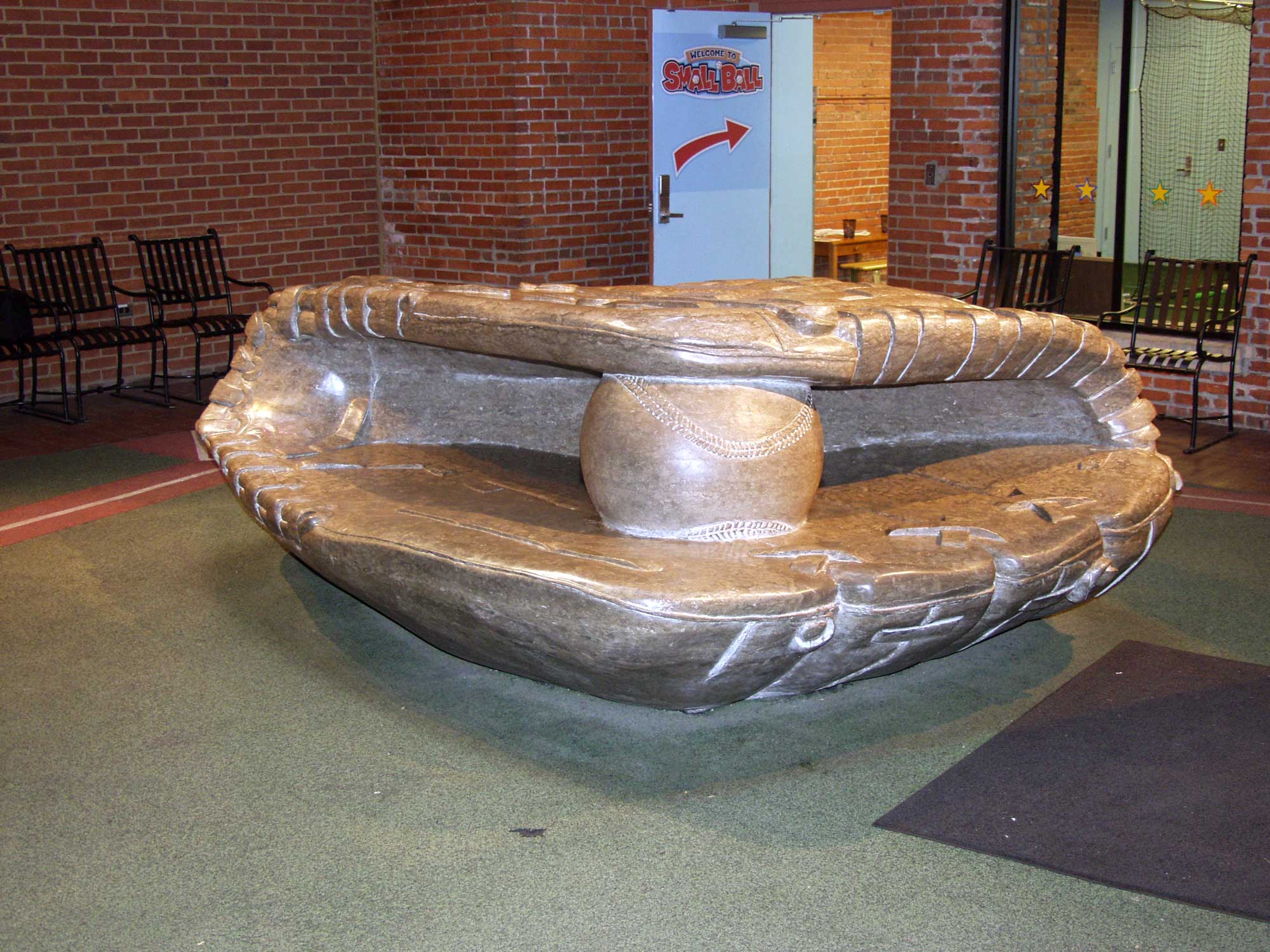 As sea level dropped later in the Ordovician, the carbonate rocks were exposed to intense erosion, and many layers of sediment were removed. The eroded layers represent an unconformity, a gap in the geological record where stratified layers have been interrupted or destroyed due to erosion or deformation. A large, regional unconformity occurs at the top of the Ordovician Knox Group—a formation of dolomite and limestone that stretches across eastern Tennessee, northwestern Georgia, western North Carolina, and southwestern Virginia—where several hundred meters (feet) of sediment may have been eroded away.

Toward the later half of the Ordovician, the Iapetus rocks (including the Taconic volcanic islands, Piedmont Terrane, and associated marine sediment) collided with the margin of North America, forming the Taconic Mountains. The Appalachian Basin, created as a result of this collision, was submerged under an inland ocean.

Layers of bentonite clay, altered volcanic ash from volcanic activity during the collision, were deposited in the inland ocean and subsequently preserved within the region’s limestone and shale. In parts of Tennessee, reefs developed along the Appalachian Basin's shallow margin, resulting in the formation of coarsely crystalline limestone that is now referred to as "Tennessee marble." While not technically a true marble, this stone gets its moniker from the fact that it polishes to an attractive and architecturally sound dimension stone. Many prominent structures throughout the US were built using Tennessee marble; these include the National Air and Space Museum, the National Gallery of Art, and the Taft Memorial in Washington DC, as well as the Tennessee Supreme Court Building in Nashville and the historic Knoxville Post Office. 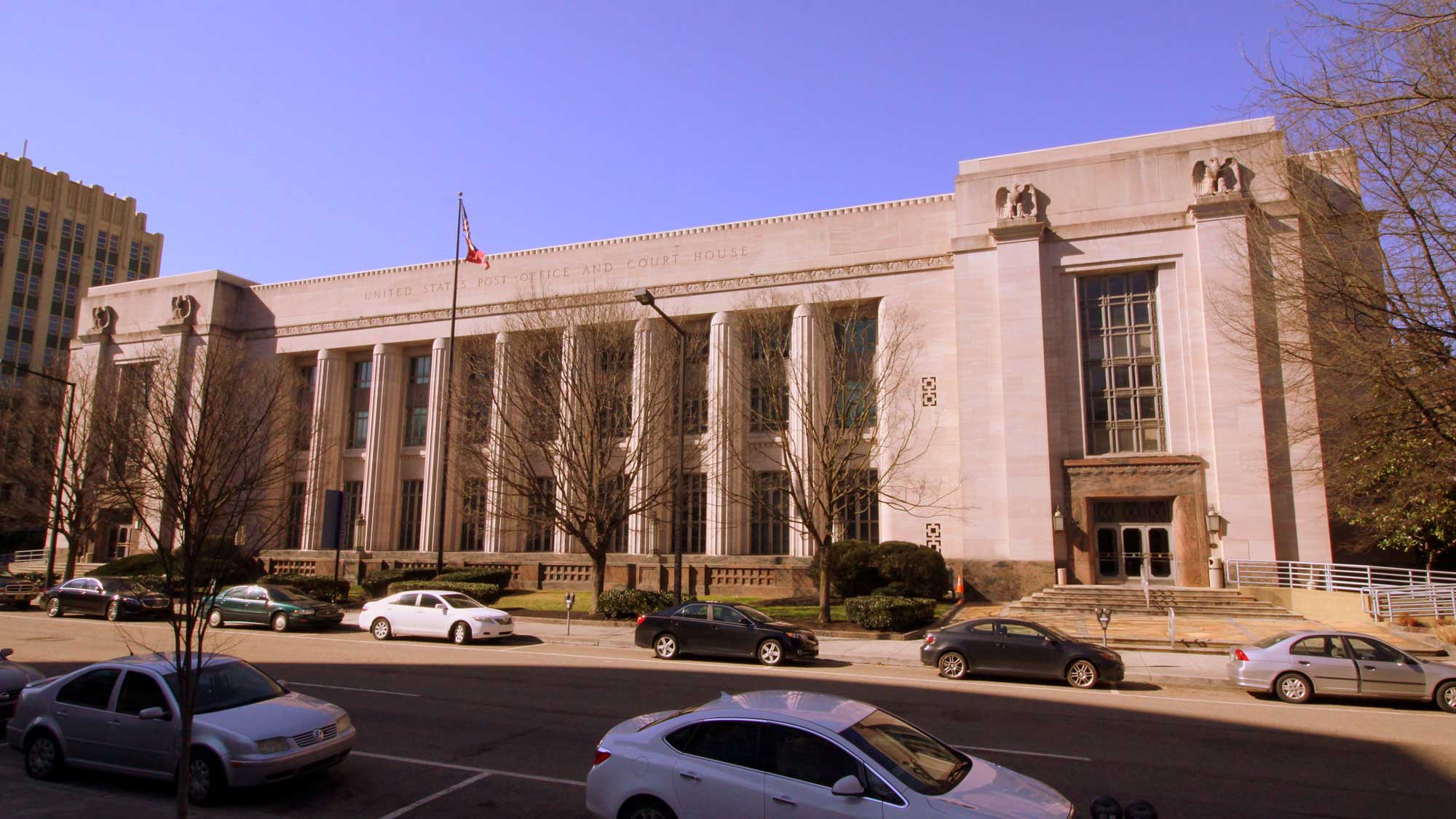 A deltaic wedge of sediment formed on either side of the Taconic Mountains as they eroded. Conglomerates formed close to the highlands, while streams brought sandy, muddy sediment to floodplains, lakes, estuaries, beaches, and into the inland ocean to form sandstone, siltstone, and shale. Sediment from the Taconic highlands spread as far south as northern Alabama and as far west as central Tennessee, but was concentrated mainly in Virginia and West Virginia. Farther away from the highlands, carbonate rocks continued to form, along with sandstone and shale. Thanks to folds, faults, and erosion, Ordovician rocks are exposed in the Valley and Ridge section of the Inland Basin, and along the Cincinnati Arch in Kentucky and Tennessee. 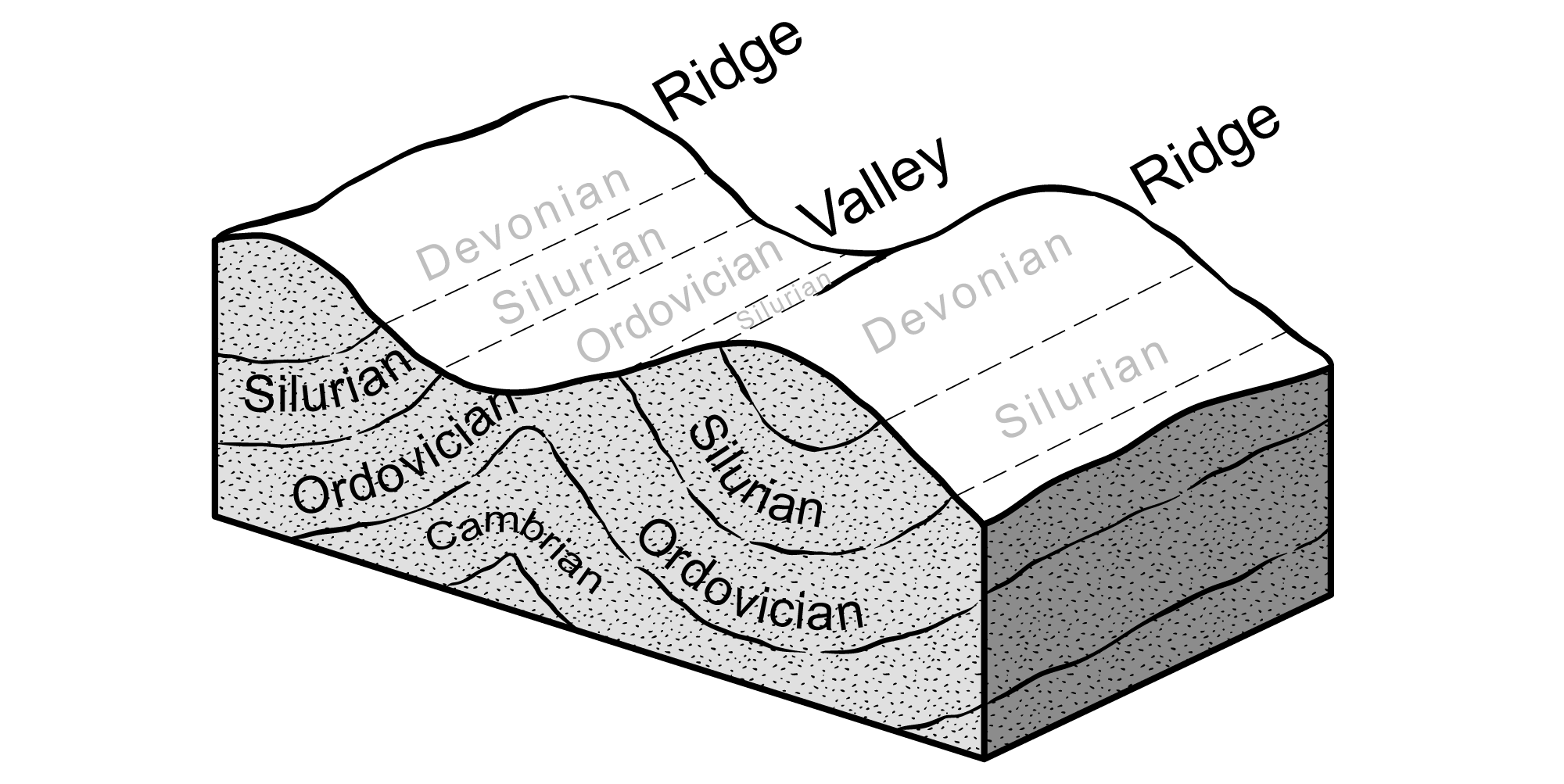 The Ordovician, Silurian, and Devonian rocks of the Inland Basin are found in long thin ribbons formed by the way layers of rock have been folded and then sliced at the surface by erosion. In the Valley and Ridge, the rocks were compressed into tight, elongated folds along the Blue Ridge during Paleozoic mountain building events. Rocks above these folds have been uplifted and eroded, exposing the older rock beneath.

Silurian rocks are exposed mainly in the eastern- and westernmost parts of the Inland Basin, where they record the continuing story of the Paleozoic inland sea and the after-effects of the Taconic Orogeny. During this period, sedimentary rocks formed in response to rising and falling sea levels as the convergence of tectonic plates continued to buckle the inland basins, deepening the ocean. Erosion of the Taconic Mountains continued to provide sediment for sandstone and shale, while carbonate rocks formed farther from shore. During the late Silurian, as the Appalachian Basin filled with sediment, the ocean became relatively shallow; many iron-rich marine sediments were oxidized upon exposure to the air, resulting in red sedimentary rocks (including sandstone, siltstone, shale and limestone). A thick band of these "red beds" is found in the Inland Basin, extending from Alabama to New York. In Birmingham, Alabama, roughly 80 meters (260 feet) of a thick Silurian red bed forms Red Mountain, a 53-kilometer-long (33-mile-long) rust-stained ridge that contains seams of hematite ore. 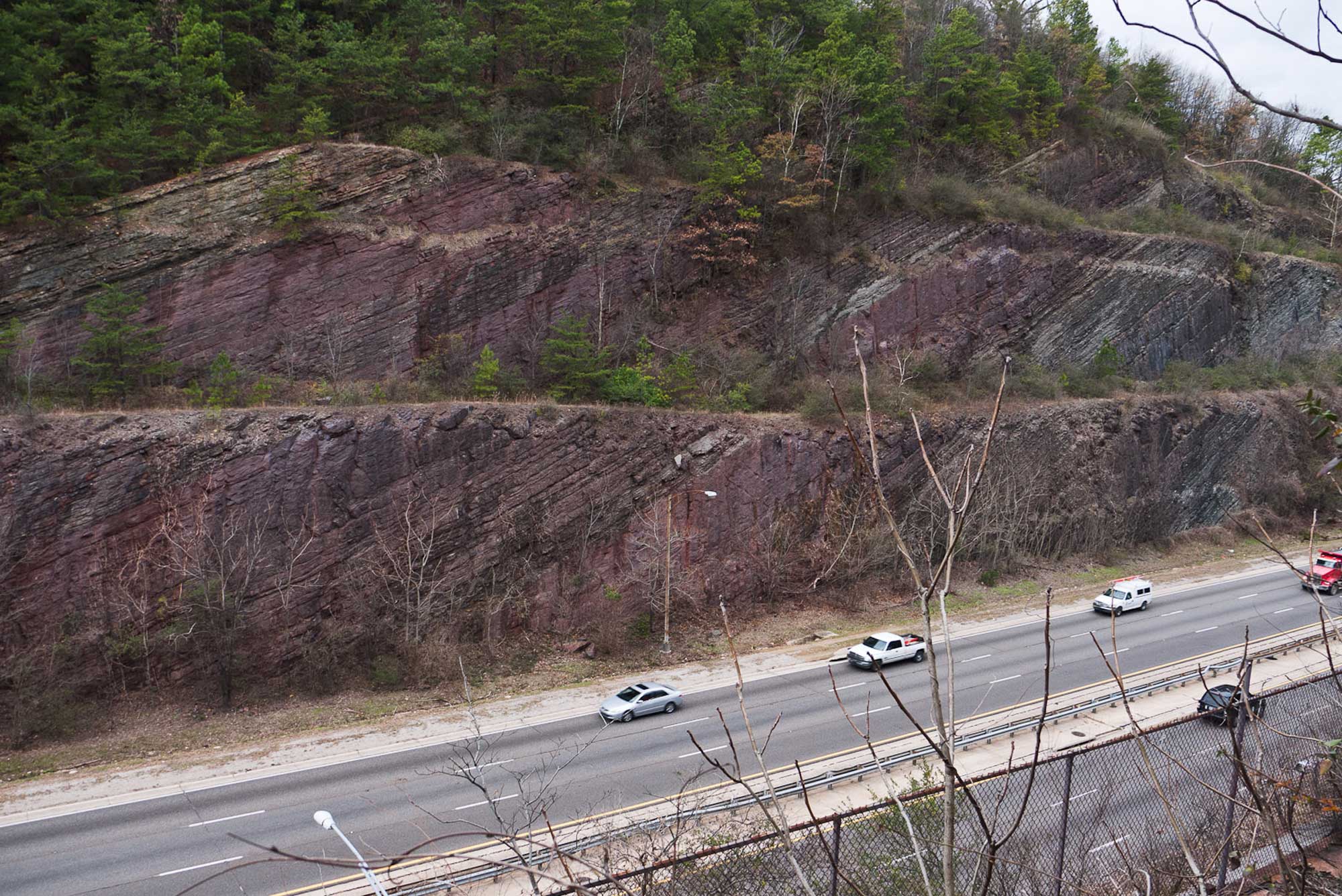 Some of the ore is oolitic, containing small pellets of iron oxide that precipitated around grains of sand or small fossil fragments.

Devonian rocks in the Inland Basin record the onset of the Acadian Orogeny, which deepened the Appalachian Basin by downwarping the crust. The Acadian highlands eroded rapidly, filling the Appalachian Basin with a westward-spreading delta called the Catskill Delta. Although the thickest sequences from this delta are found in Pennsylvania and New York, Catskill Delta deposits can also be seen throughout West Virginia and Virginia.

Many of the Devonian rocks produced during the Acadian Orogeny are similar to those of the Ordovician: conglomerate, sandstone, siltstone, shale, and carbonates. Widespread black shales were deposited in deeper waters as organic-rich marine mud. The Devonian Chattanooga Shale, a black shale found throughout the Inland Basin, is an important source rock for petroleum and natural gas. 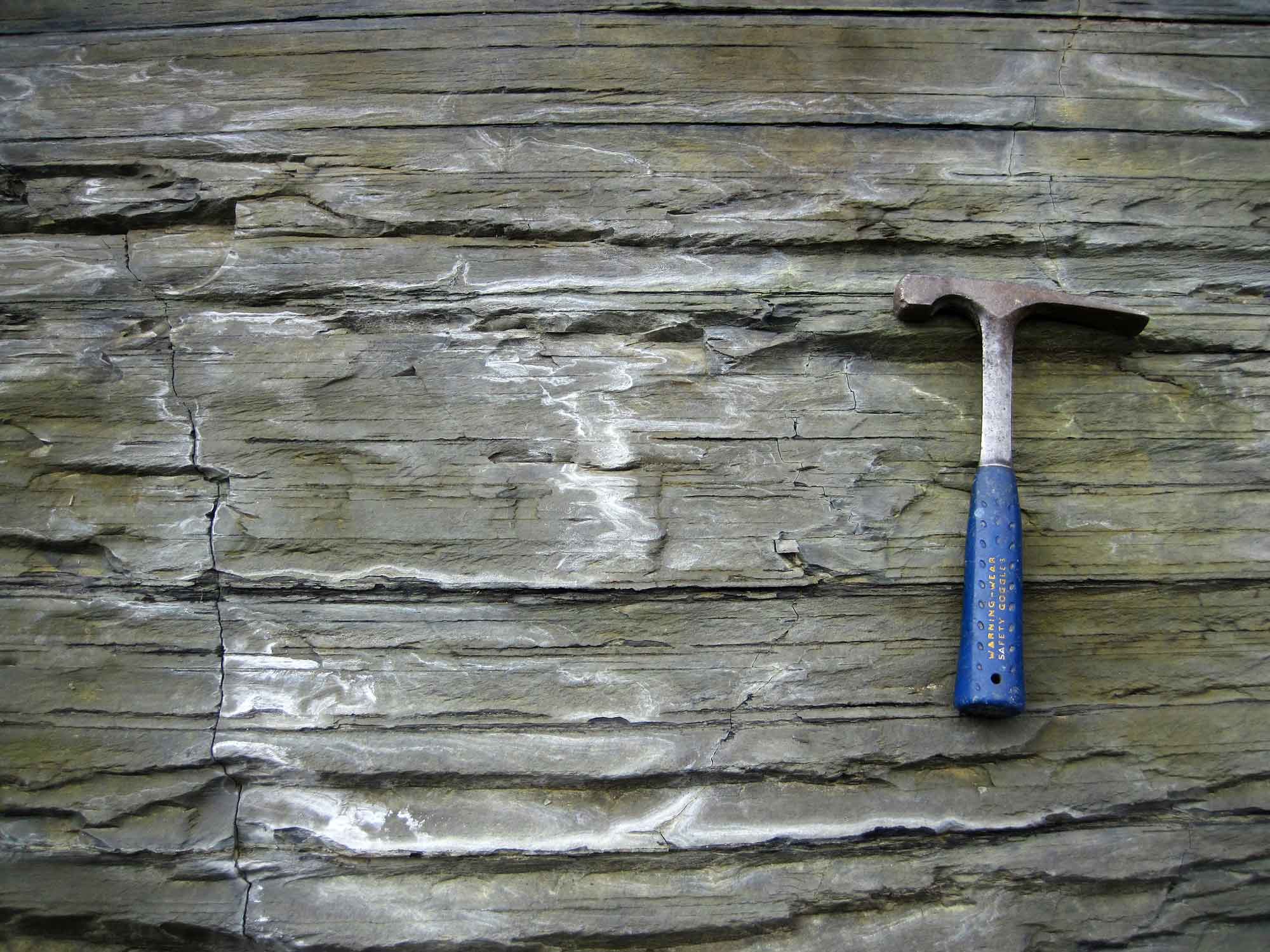 Mississippian rocks dominate the western edge of the Inland Basin, but they are also found in smaller outcrops throughout the region. During the Mississippian, sediment from the Acadian highlands continued to fill the basin’s deeper waters with mud, silt, and sand. Carbonate deposits from this time are rich in silica provided from the bodies of siliceous sponges as well as quartz sand and silt, and chert is common. Many of these carbonate rocks have since been subject to erosion and dissolution, generating a landscape of sinkholes and caverns. The world's longest known cave system, Mammoth Cave in Kentucky, is found in Mississippian limestone. 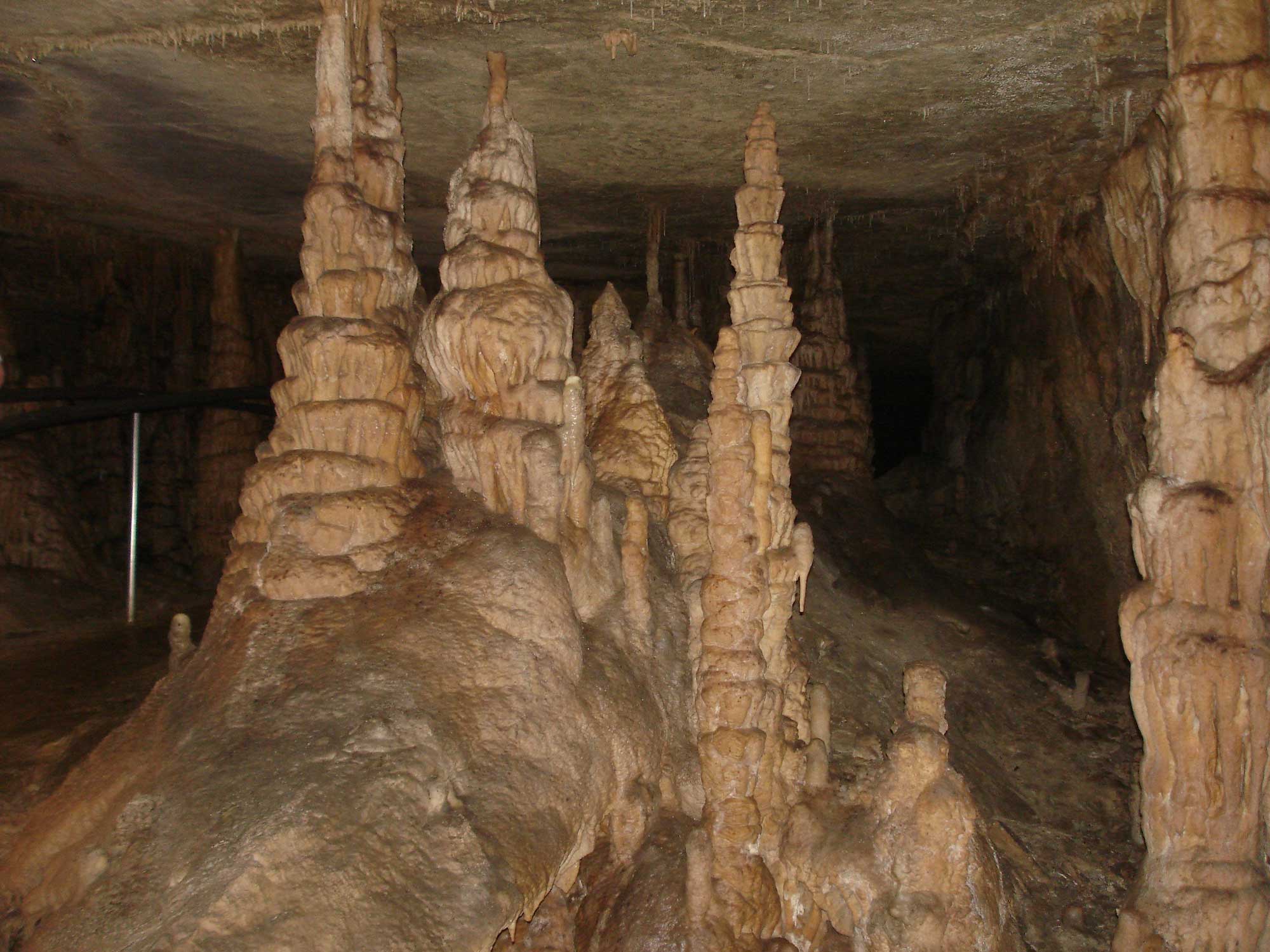 At the southern end of the Illinois Basin in western Kentucky, evaporites formed where shallow water restricted circulation, aiding evaporation.

Toward the end of the Mississippian period, sea level fluctuated, and deltas and coastlines advanced and retreated repeatedly. These rapid changes between coastal and terrestrial environments created deposits called cyclothems: alternating sequences of terrestrial and marine sedimentary layers dominated by thick limestones and dolomites. 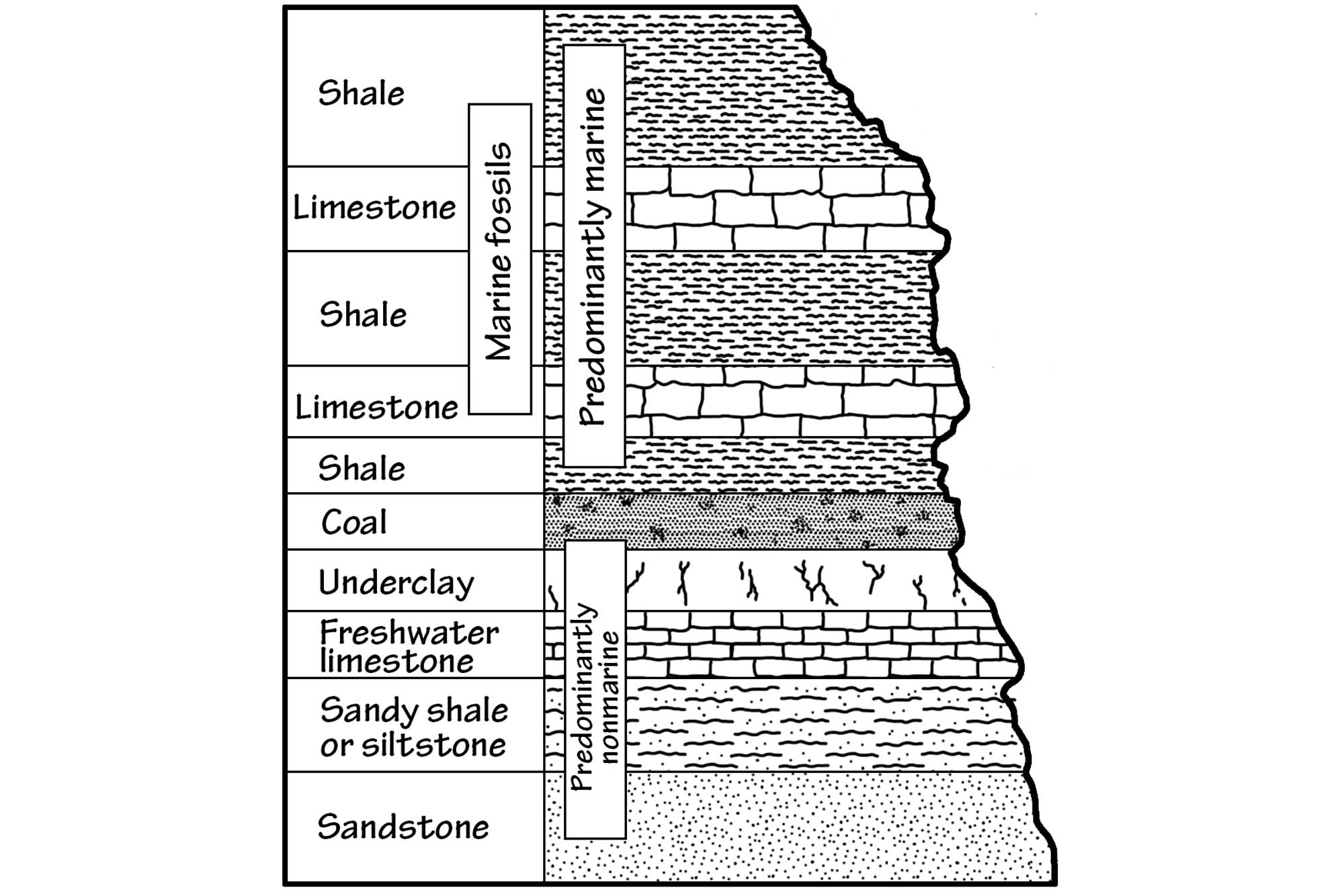 Example of a cyclothem.

Thanks to a warm, tropical climate, large swamps dominated the shorelines, creating vast marshy areas along basin margins. Decomposing plant material accumulated as thick deposits of peat, which was later buried by sediment and compressed to form layers of coal. Pennsylvanian cyclothems from the Inland Basin, found in a wide band through the Appalachian Plateau and in western Kentucky, include thick bands of coal within their repeating sedimentary sequences. 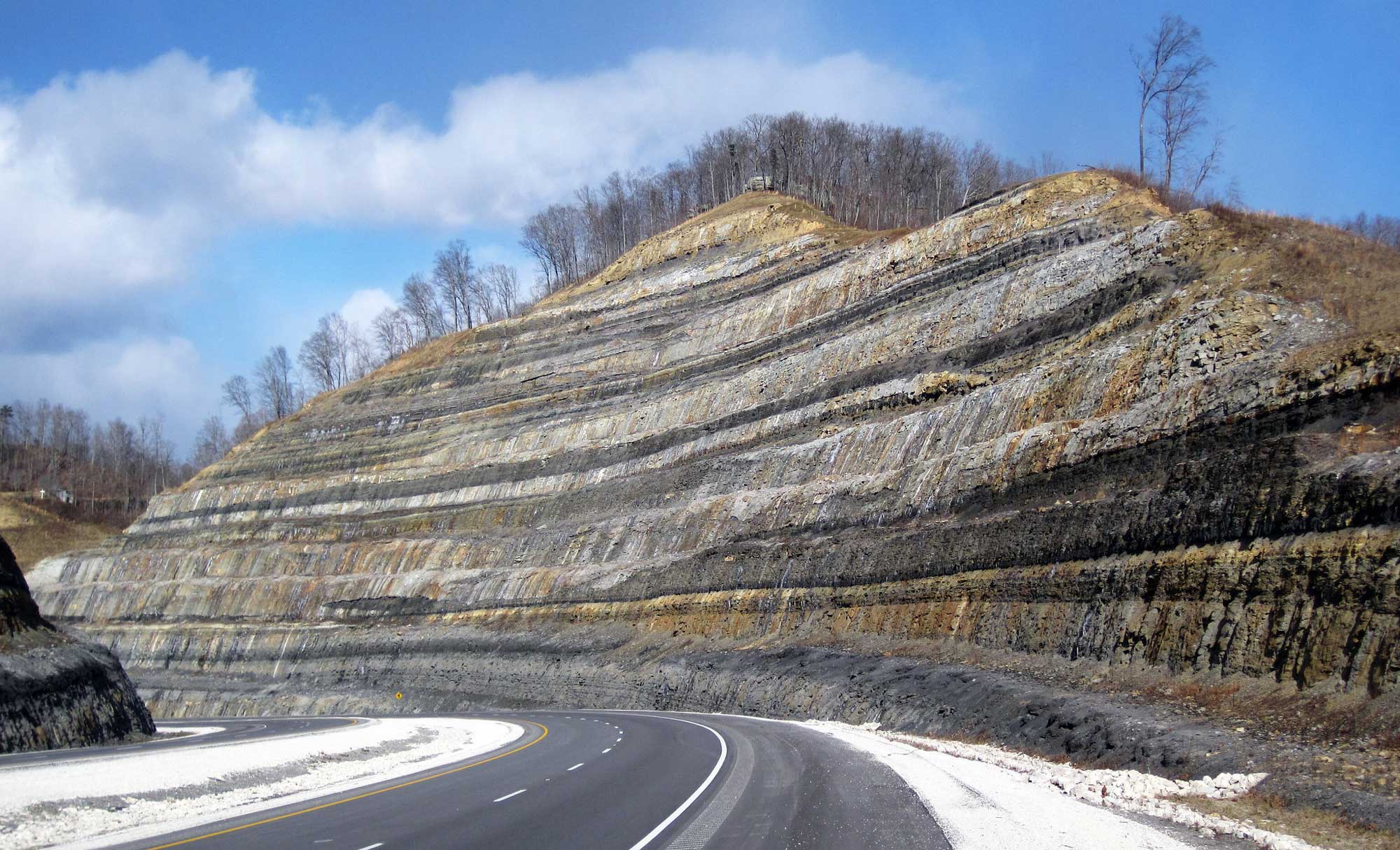 During the late Carboniferous, Gondwana (a landmass composed of Africa, South America, and Australia) and North America converged into the supercontinent Pangaea. A deep trench formed at the convergent plate boundary, and ocean bottom sediments were squeezed up onto the Gulf Coast margin to form the Ouachita Mountains of Arkansas and Texas. Remnants of the Ouachita Mountains also cut across modern-day Mississippi at the collision zone, but they are deeply buried today. As the Iapetus Ocean closed, the Appalachian Mountains were formed on the adjacent plate margin where Africa collided with North America. The collisions created a depression—today known as the Black Warrior Basin—into which sediment was deposited from erosion of both the Appalachian and Ouachita mountains.

By the Permian, the assembly of Pangaea was complete, and the Iapetus Ocean began to close. As the inland sea covering eastern North America retreated for the final time, the Southeast’s climate became significantly drier, and the lush Pennsylvanian coal swamps were gradually replaced by red beds and lacustrine carbonates, typical deposits of drier climates. Some of these Permian-aged deposits are exposed at the surface in West Virginia.

In addition to rocks produced by physical Earth processes, some rocks in the Southeastern states have been influenced by objects of extraterrestrial origin. Geologists in the Southeast have found abundant evidence of meteorites striking the Earth in the past. 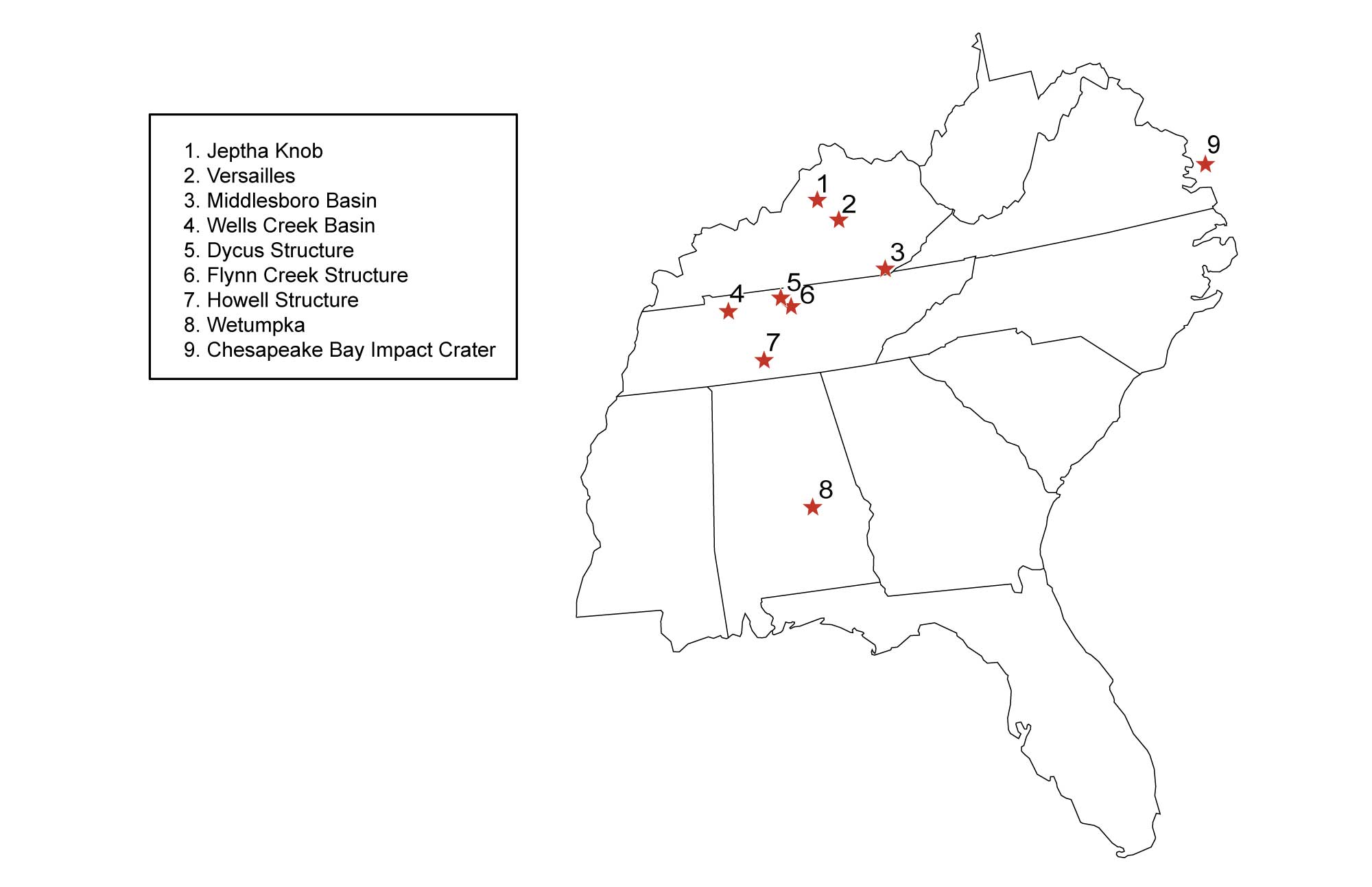 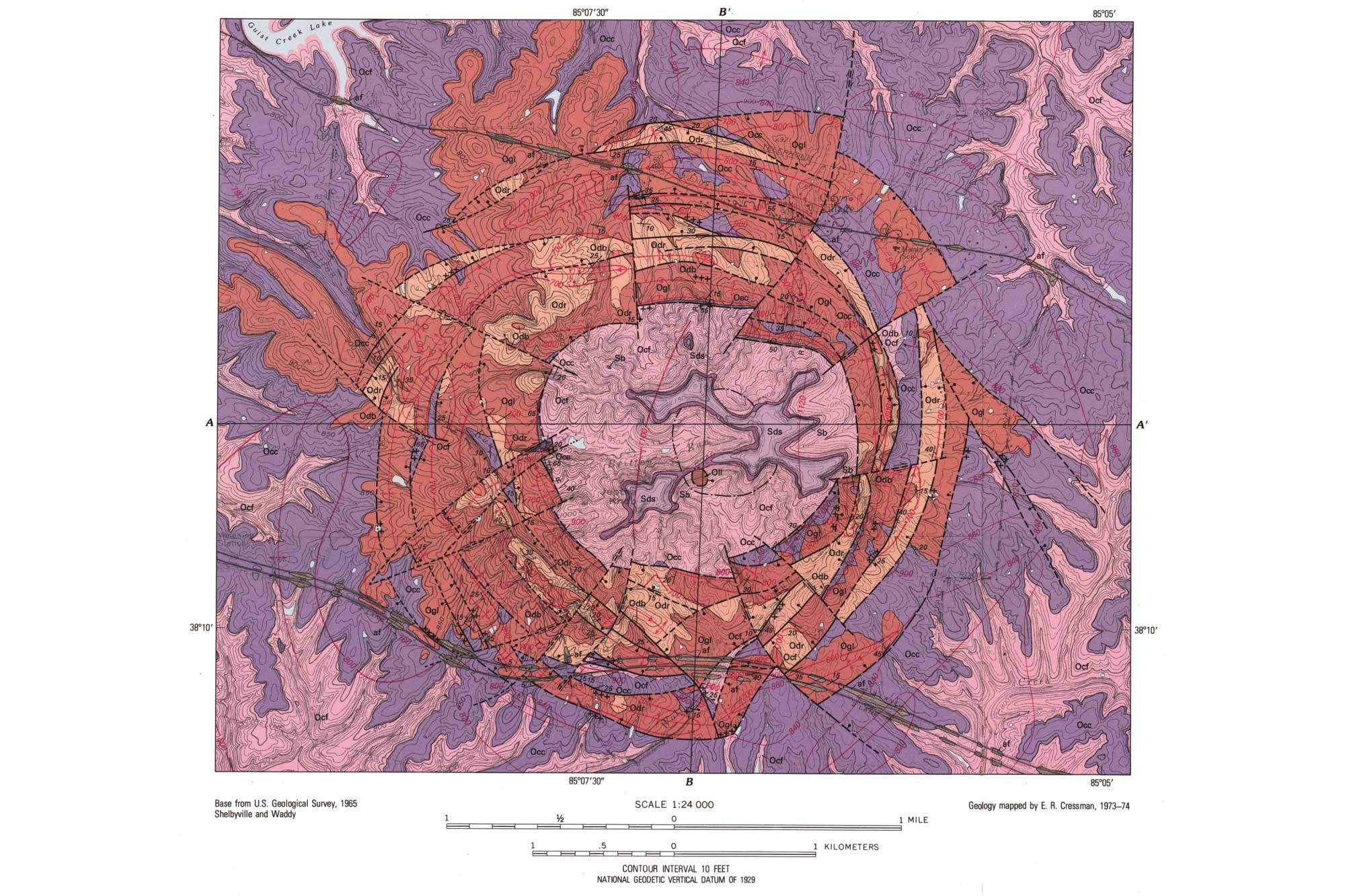 A geologic map of the Jeptha Knob impact structure in Shelby County, Kentucky, and associated fault lines. This structure was formed over 440 million years ago when a meteorite impact fractured the landscape and uplifted multiple fault blocks. As the highest point in the county, Jeptha Knob is now used as a location for cell and radio towers. Image by the United States Geological Survey (public domain).

Impact structures are characterized by a central, upraised area of jumbled rock, geologic disruption that decreases in intensity away from the center, and rings of concentric faults surrounding the area. The abundance of preserved impact structures through time and other evidence of meteoritic materials from sedimentary rocks (such as minerals "shocked" by the impact) makes it clear that meteorite impacts are a common occurrence throughout geologic time—including at the end of the Mesozoic Era, when a meteorite impact was involved in the extinction of the dinosaurs.