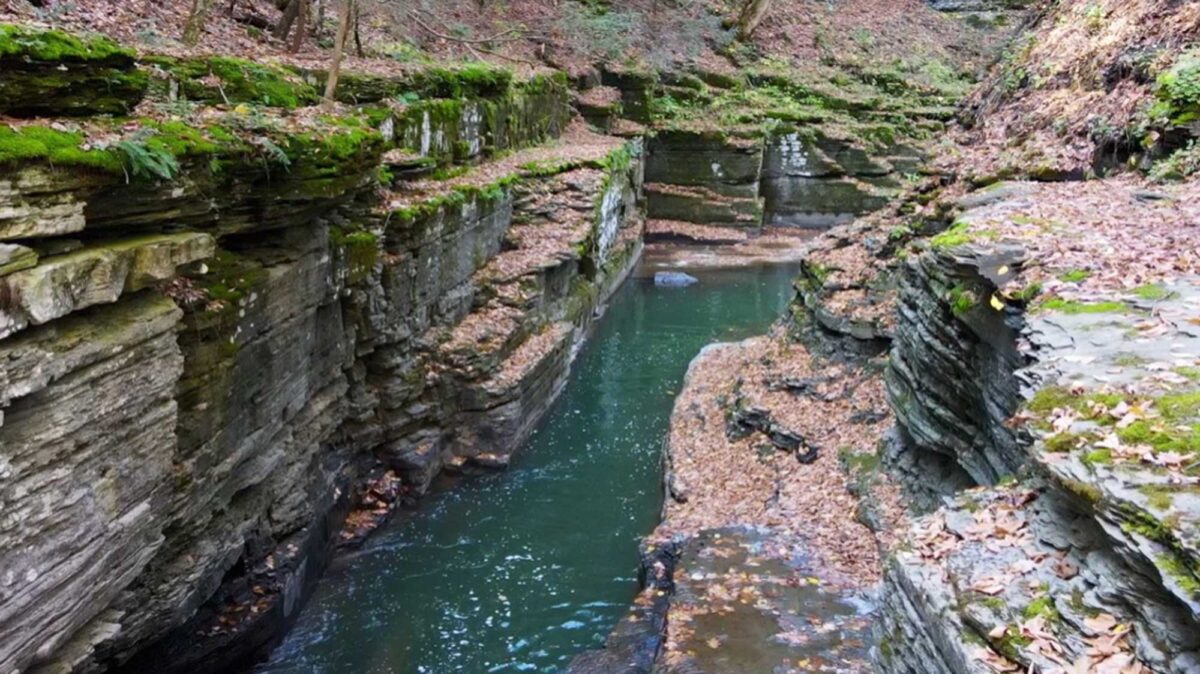 Six Mile Creek flows into Cayuga Lake from the southeast, through the city of Ithaca. The city gets its drinking water from Six Mile Creek, so the creek and its gorges include a series of dams and reservoirs. Six Mile Creek also has hiking trails and unique local geology. The best access for hiking Six Mile Creek is at the Mulholland Wildflower Preserve, on Giles Street in Ithaca. 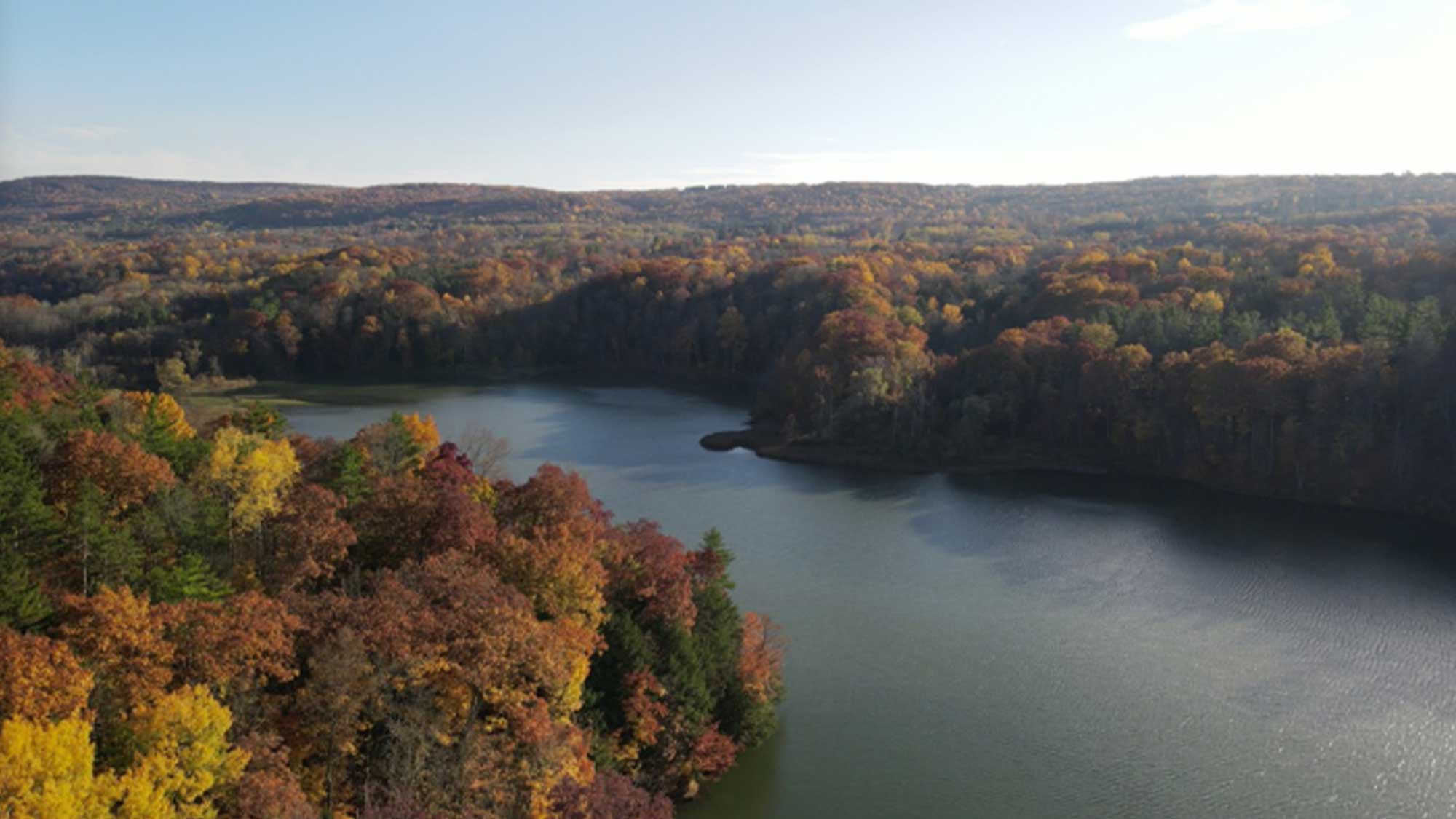 The creek carves a valley through the local bedrock. The rock layers are sandstones and shales formed from sand and mud deposited on the bottom of the ocean about 380 million years ago during the Devonian Period. The rocks contain abundant marine fossils – organisms known to have lived in warm, shallow seawater, because their descendants still live in those conditions today (see Virtual Collection of New York Devonian fossils here). For example, brachiopods are marine animals with two shells and are visually similar to clams and scallops (learn more here). They are some of the most common fossils that we find preserved in our bedrock. 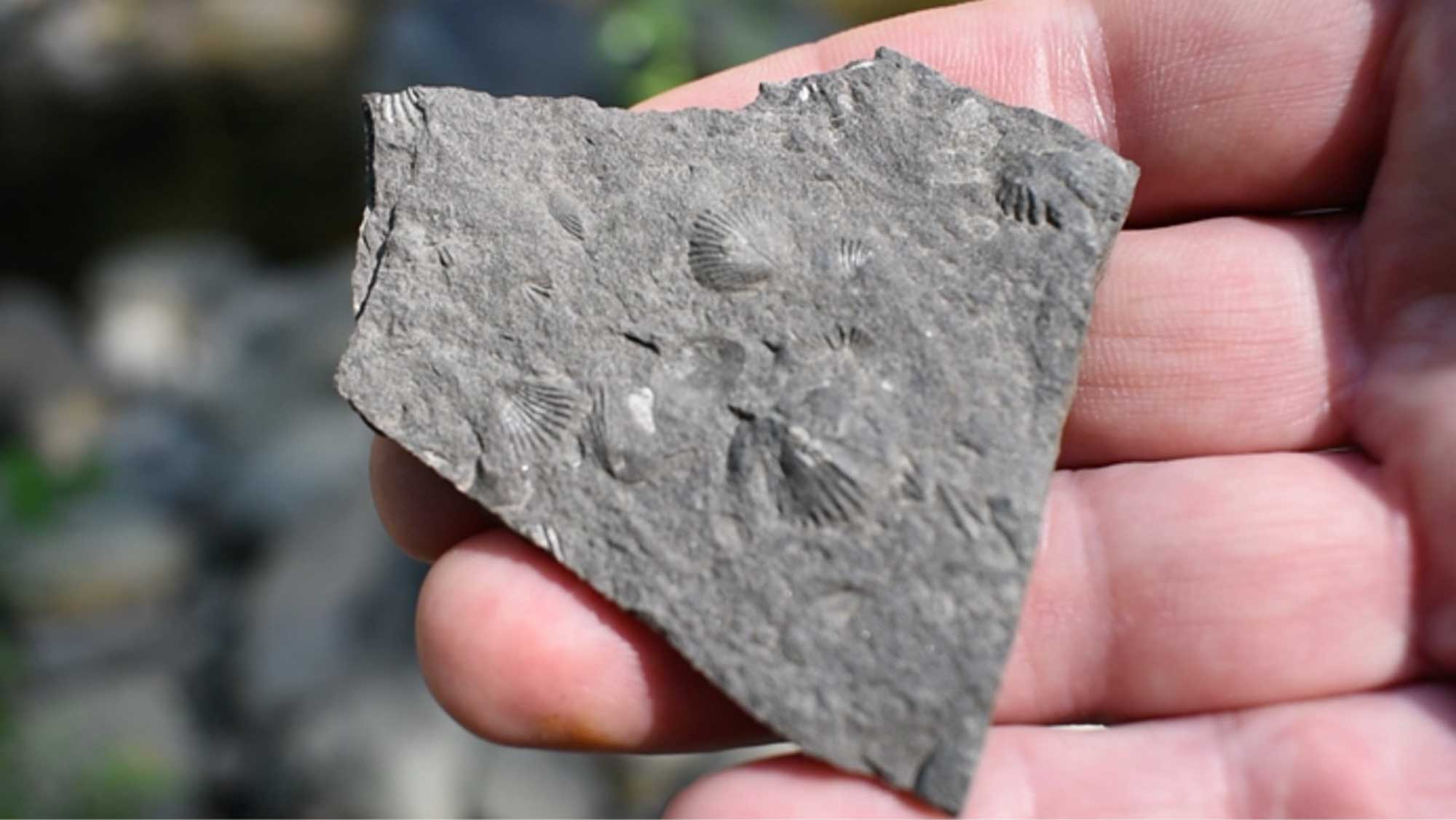 Clearly there must have been some process that caused the Devonian ocean to recede and to leave this landscape high and dry. Paleogeographic evidence from around the world demonstrates that millions of years after these sediments were deposited and turned to rock, the North and South American continents collided with Europe and Africa, creating a single supercontinent that geologists have named Pangea. A lot of damage is done to the bedrock when continents collide. The land gets uplifted, often tilted and deformed, and pervasively fractured. Those fractures are an important part of the formation of the gorge at Six Mile Creek, and one of the reasons that Ithaca is Gorges. 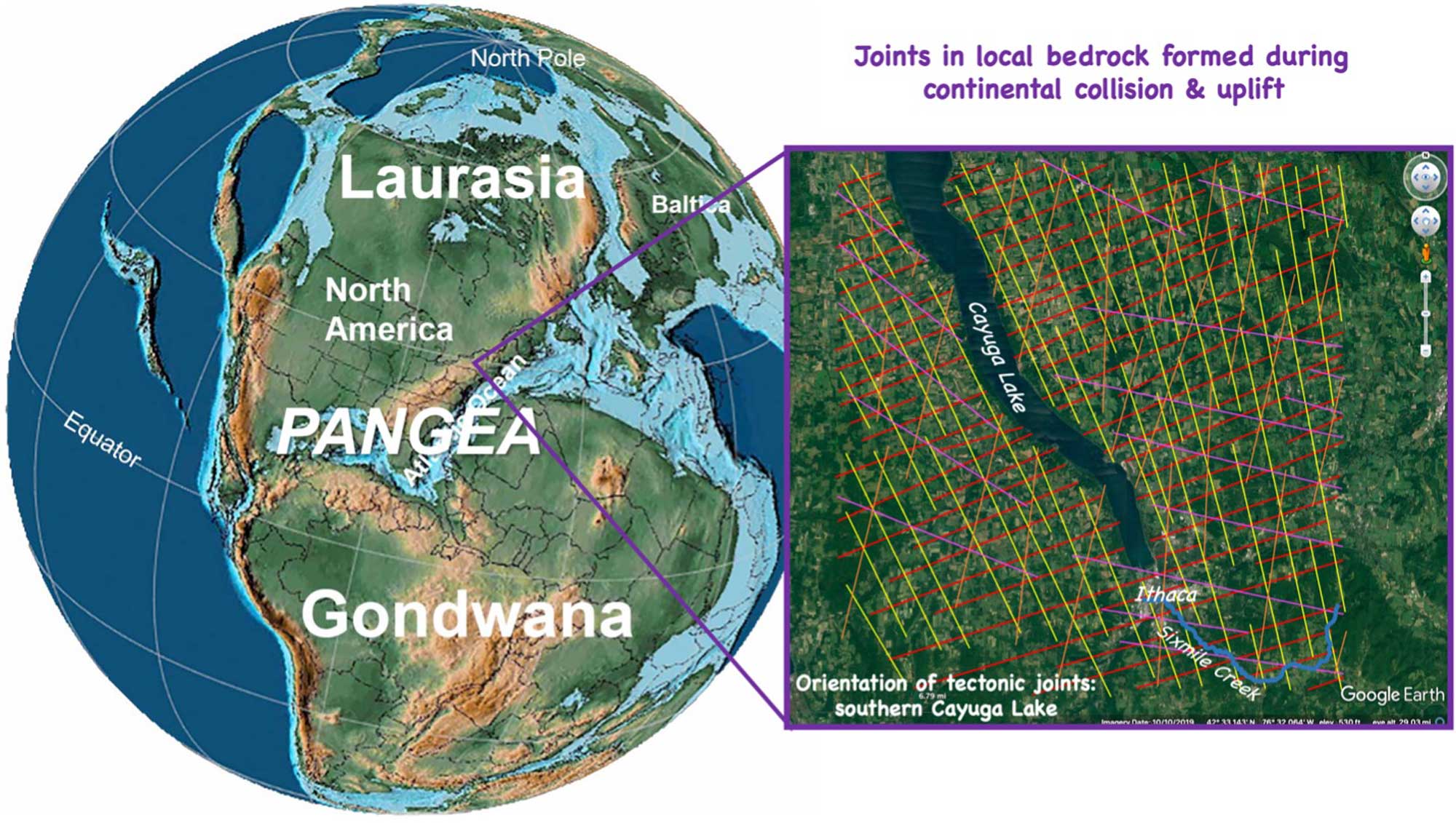 The fractures are called joints, and there are actually several sets of parallel joints. Some run roughly east-west, others north-south. Clearly, Six Mile Creek has taken advantage of these planes of weakness as it erodes its modern channel. The joints are the reason that some parts of Ithacaʻs gorges are narrow and deep, with nearly vertical walls (learn more about joints in the Finger Lakes Region here). 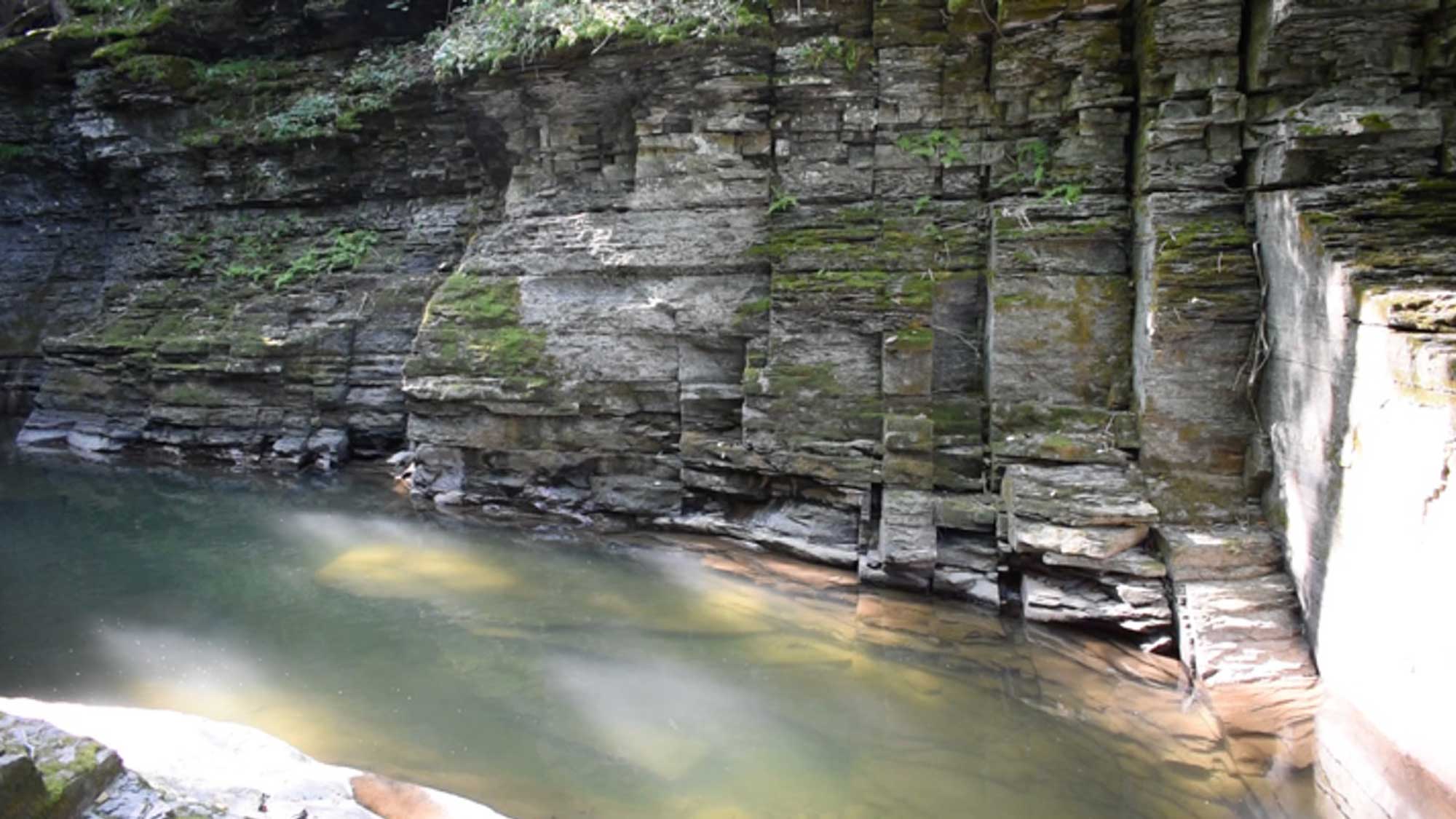 Other geologic processes take advantage of the joints as well. During the Cretaceous Period—around 140 Ma—molten magma welled up from deep beneath Ithaca following the joints toward the surface. The magma cooled to form an igneous rock called kimberlite, and is now visible filling some of our local joints. 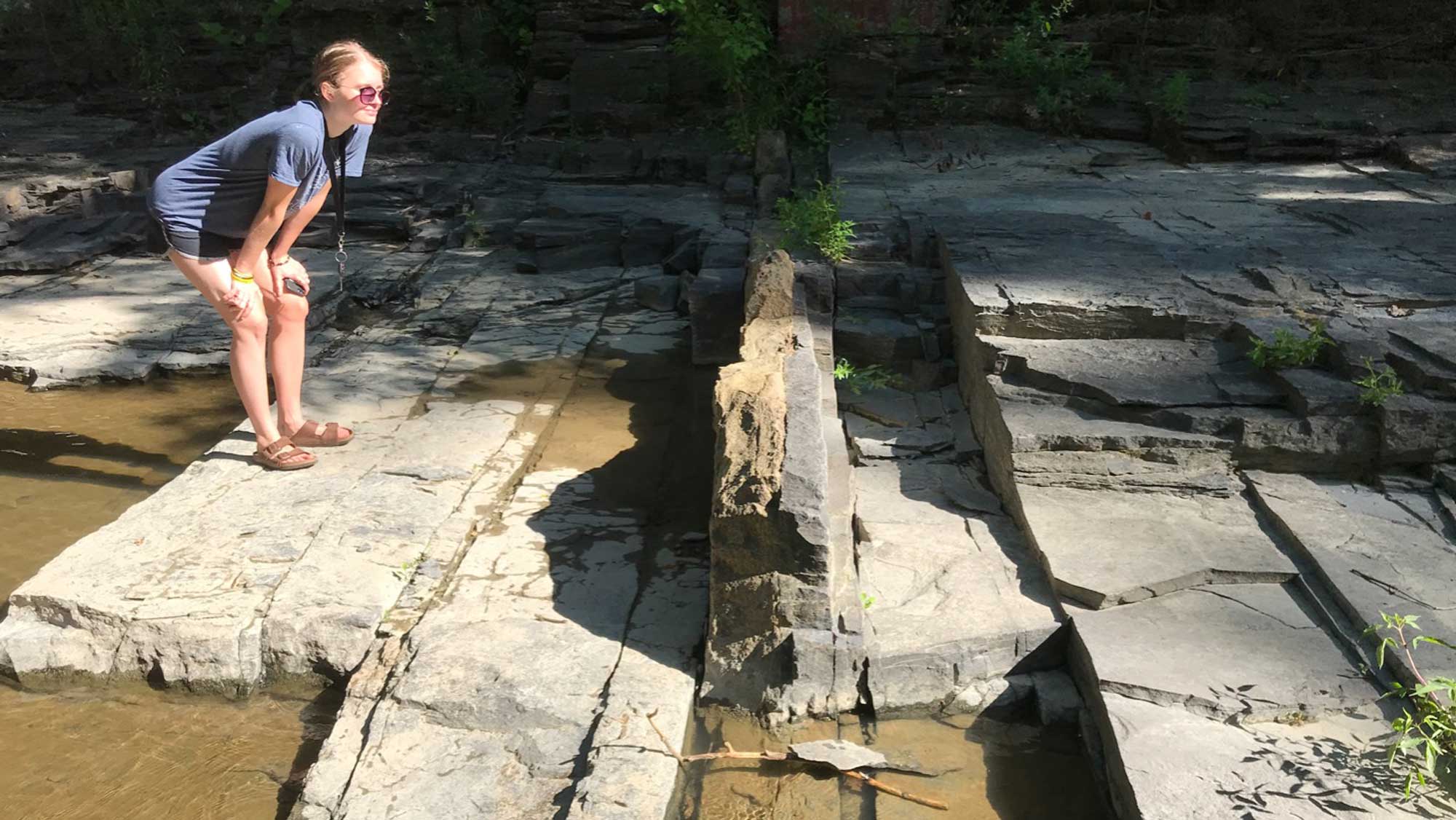 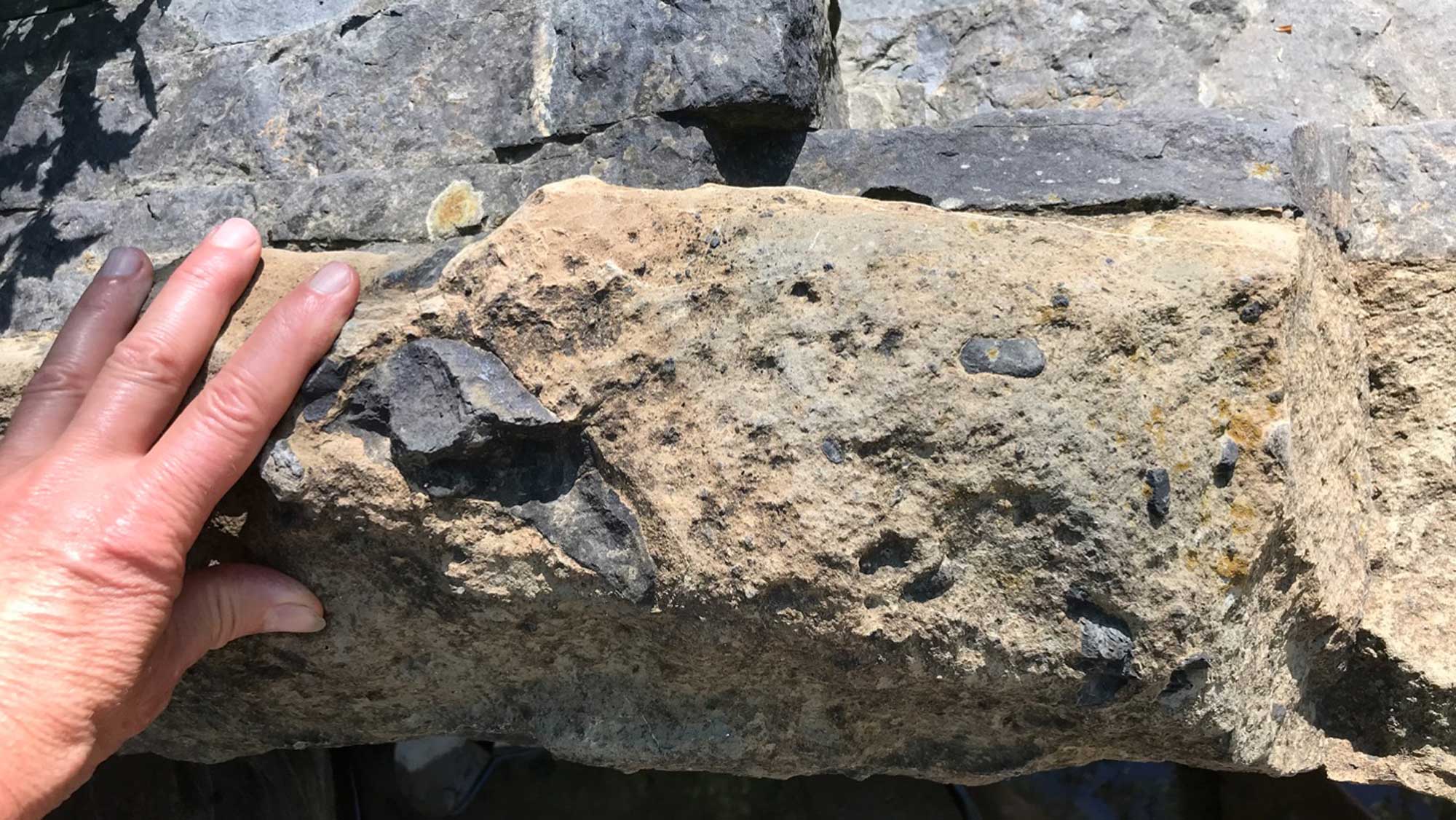 The kimberlite is clearly different from the surrounding bedrock. Not only is the kimberlite a different color, but it contains pieces of the surrounding bedrock within it. Kimberlite is an igneous rock that originates as molten magma up to a hundred miles beneath the surface  It moves to the surface very rapidly—rapidly enough that it can rip off pieces of the local bedrock from the side of the conduit as it is moving upward. When the magma cools those pieces remain incorporated in the rock. The fragments are called xenoliths because they are different from the rock that they are found in (xeno=foreign, lith=rock).

At the time that the kimberlite magmas erupted in the early Cretaceous Period, the supercontinent Pangea had split apart and the Atlantic Ocean was growing wider. Deep within the Earth, an anomalously hot spot within the mantle generated magma that erupted at the surface as the tectonic plates passed over. A chain of volcanic eruptions tracks the movement of the North American plate over the hot spot, extending from northern Canada, through the Finger Lakes, and out across the floor of the Atlantic Ocean. 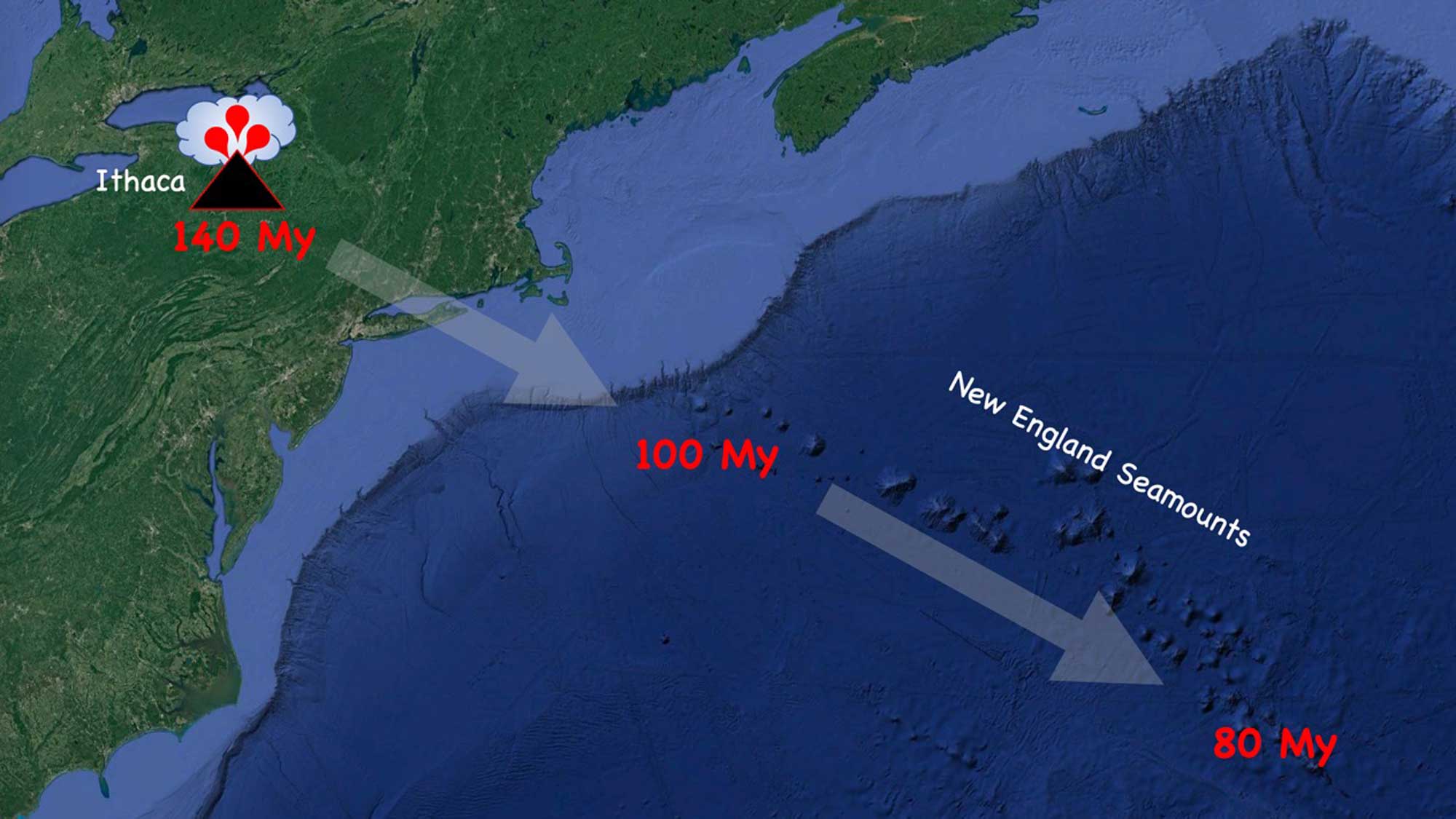 A mantle hot spot appears on Earthʻs surface as a chain of volcanic eruptions that decrease in age toward the current location of the hot spot. The Six Mile Creek kimberlite is part of a series of erupted igneous rocks that extends from the North American continent across the floor of the Atlantic Ocean (My=millions of years ago). Image by Alexandra Moore for PRI's [email protected] project (CC BY-NC-SA 4.0 license).

There are other unusual rocks in Ithacaʻs gorges that are much easier to spot. Walking along the path or in the creek it is common to find big round boulders that donʻt look like the bedrock that forms the gorges. 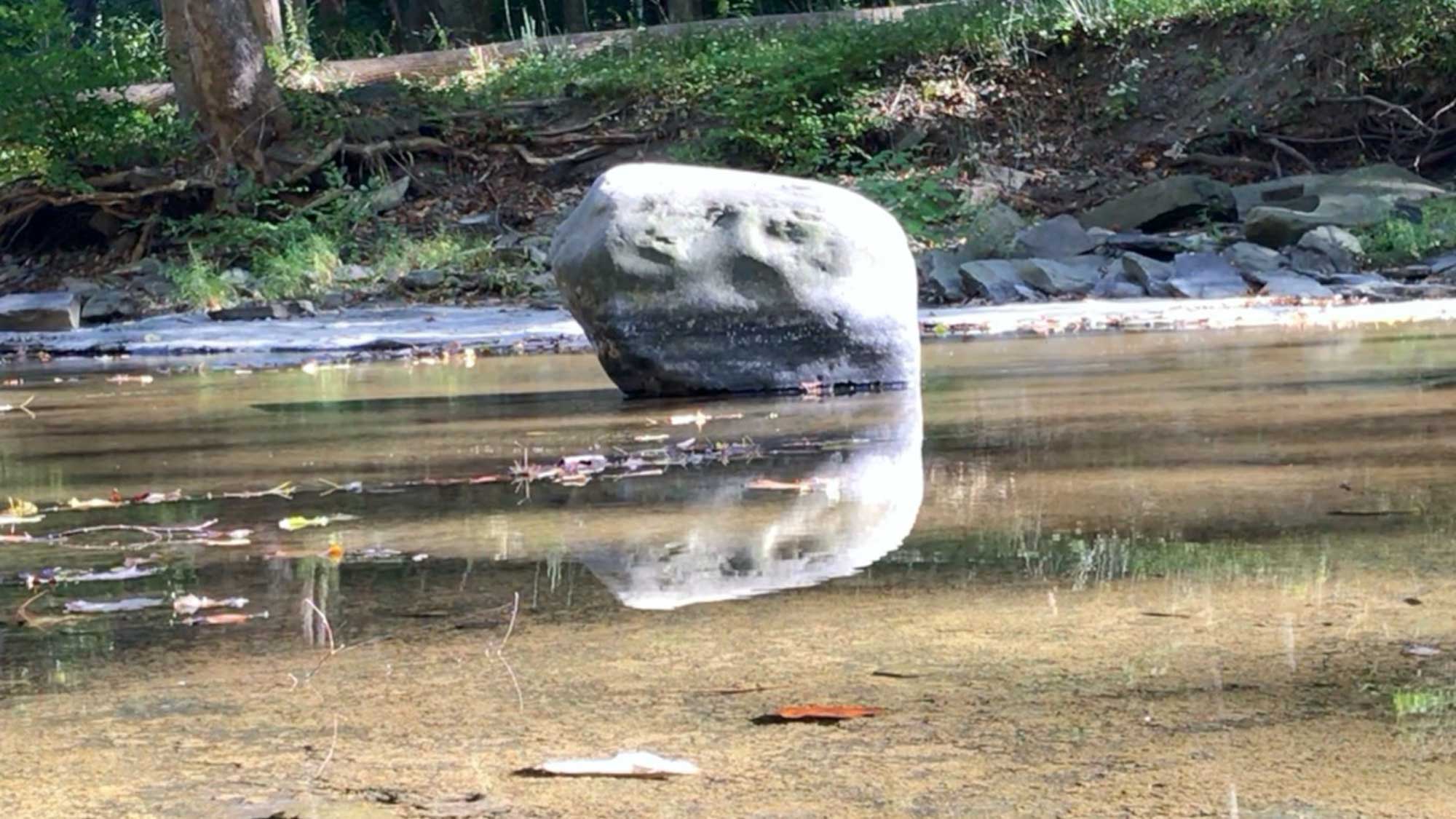 This boulder is a glacial erratic, transported by advancing continental ice sheets during the last glacial period, and deposited here when the ice melted. Photograph by Alexandra Moore for PRI's [email protected] project (CC BY-NC-SA 4.0 license).

While the boulders themselves are millions of years old, they have arrived in the creek much more recently. These are called glacial erratics. They were scoured up by the ice sheets that moved across North America tens of thousands of years ago, and when the ice melted these rocks melted out and landed here. They are “erratic,” because their composition and appearance tell us they are not from here.

The advancing ice sheets that transported the erratics also modified the landscape. The valleys of the Finger Lakes are so deeply scoured that the lake bottoms are below sea level (learn more here). Streams like Six Mile Creek that flow into these deep valleys rapidly erode the bedrock. With the help of the vertical joints, the streams create narrow, steep-sided gorges. 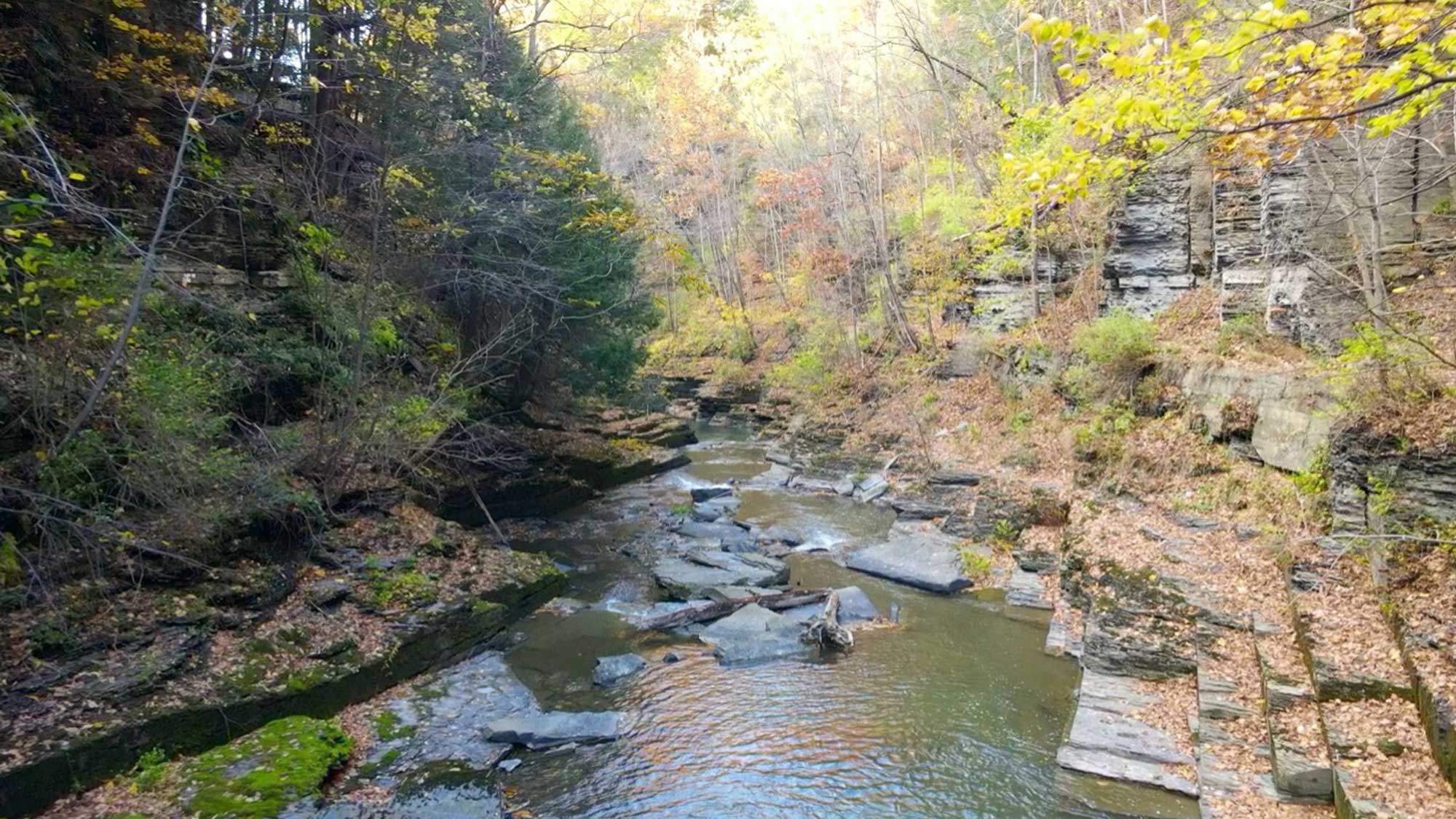 Walking along Six Mile Creek gives us a really intriguing look into the geologic past of the Finger Lakes region. We observe the evidence for ancient oceans and the creatures that lived there. We can see the effects of plate tectonic collisions that uplifted our landscape above sea level. Volcanic rocks are even revealed in the creek bed. All of this is visible to us today because glaciation modified our landscape and allowed running water to carve Ithacaʻs gorges.