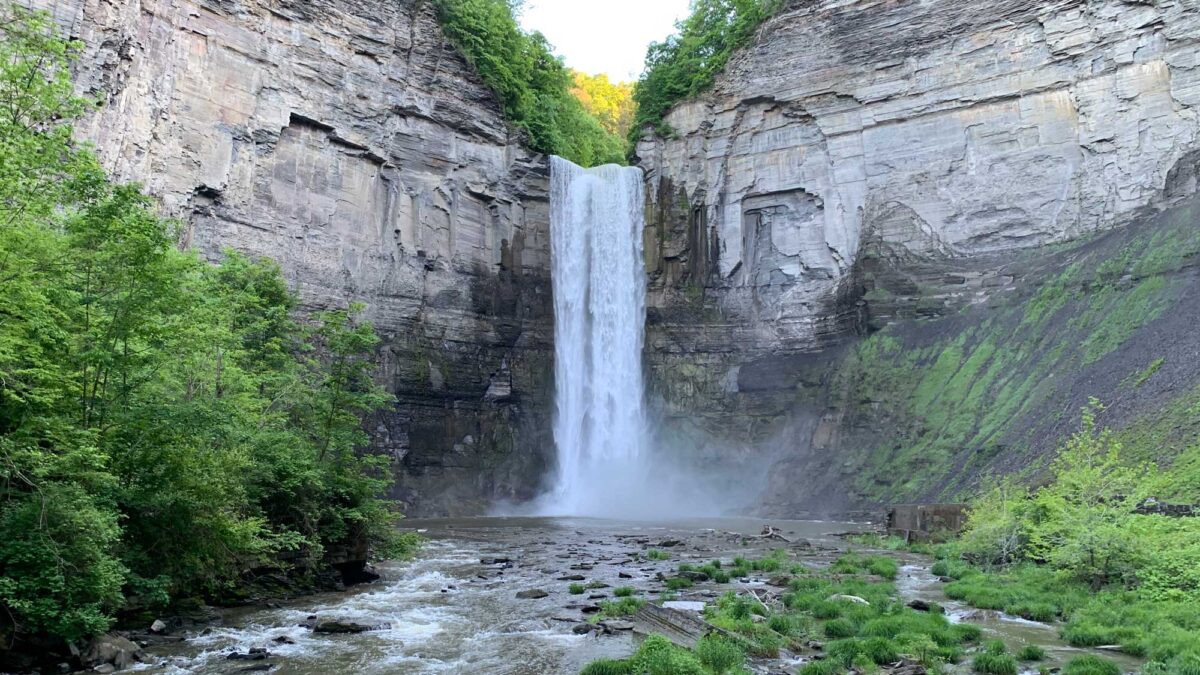 Most of the following text is derived from the book "Ithaca is Gorges: A Guide to the Geology of the Ithaca Area, Fourth Edition" by Warren D. Allmon and Robert M. Ross, published in 2007 by the Paleontological Research Institution (Special Publication No. 31).

A free, downloadable audio tour developed by Dr. Robert Ross about the geology of Taughannock Falls State Park is available from izi.TRAVEL (download of free app is required).

Taughannock Falls is located in Tompkins County on the west side of southern Cayuga Lake. It can be viewed from a distance at an overlook close to a parking lot, or up close by hiking a short distance (less than 1 mile each way) along a a gentle path that follows the creek bed (this path is usually open year round).

At 215 feet (65.5 meters), Taughannock Falls is higher than Niagara Falls. In fact, it is the highest vertical single-drop waterfall in the northeastern United States, and one of the highest waterfalls of any kind east of the Rocky Mountains. 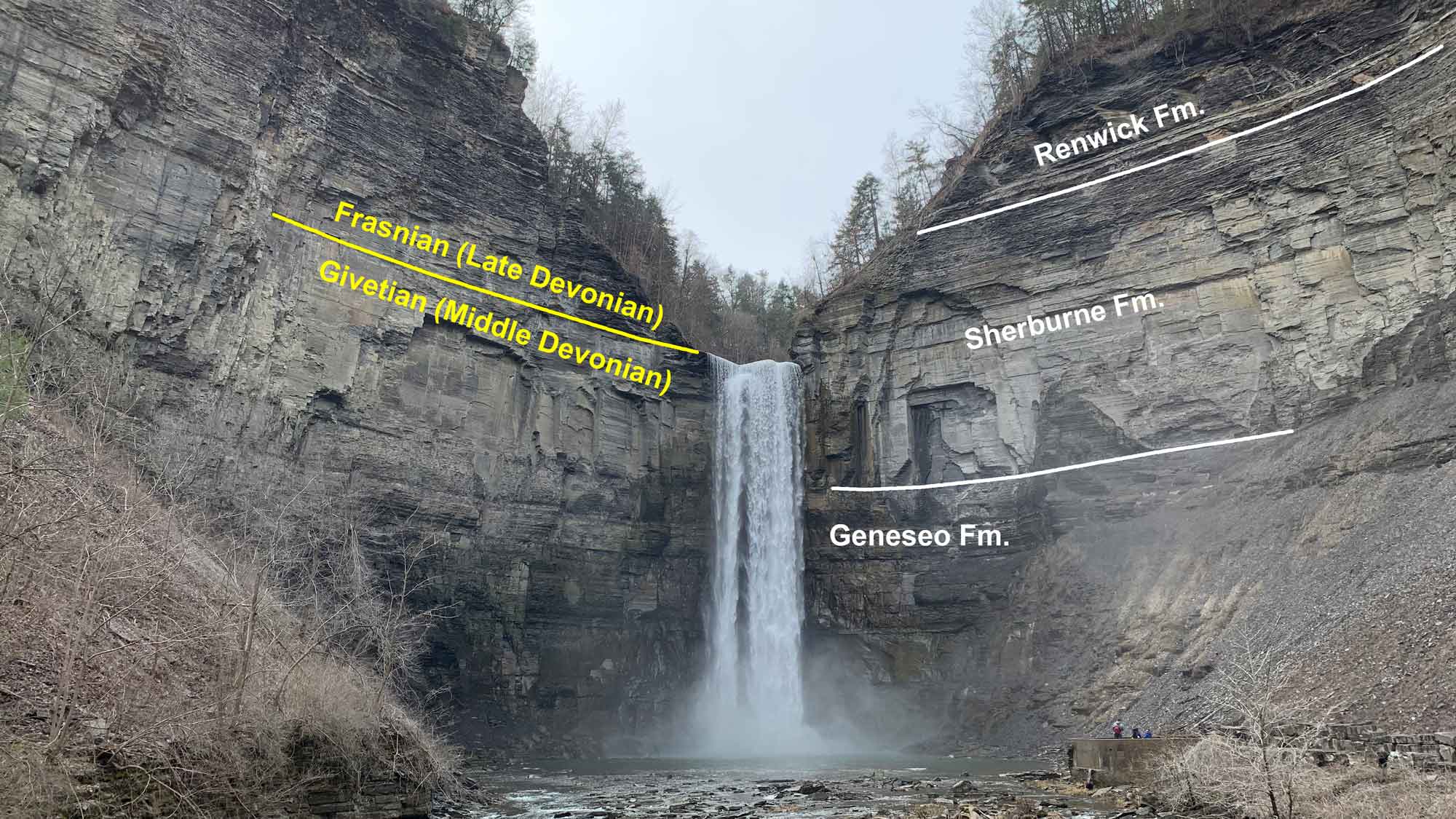 Taughannock Falls, Tompkins County, New York. Approximate positions of major stratigraphic boundaries are indicated, including the Geneseo, Sherburne, and Renwick formations. Note that the "caprock" – the resistant rock over which the larger falls tumble – is  sandstone of the Sherburne Formation, which is roughly coincident with the Frasnian-Givetian (or, Middle Devonian-Late Devonian) boundary. Photograph by Jonathan R. Hendricks for PRI's [email protected] project (CC BY-NC-SA 4.0 license).

Taughannock Gorge was formed as Taughannock Creek eroded through more than 400 feet (122 meters) of shale and deposited it in a broad delta on the western side of Cayuga Lake. The lawn, beach, and marina areas of the park now occupy this delta. 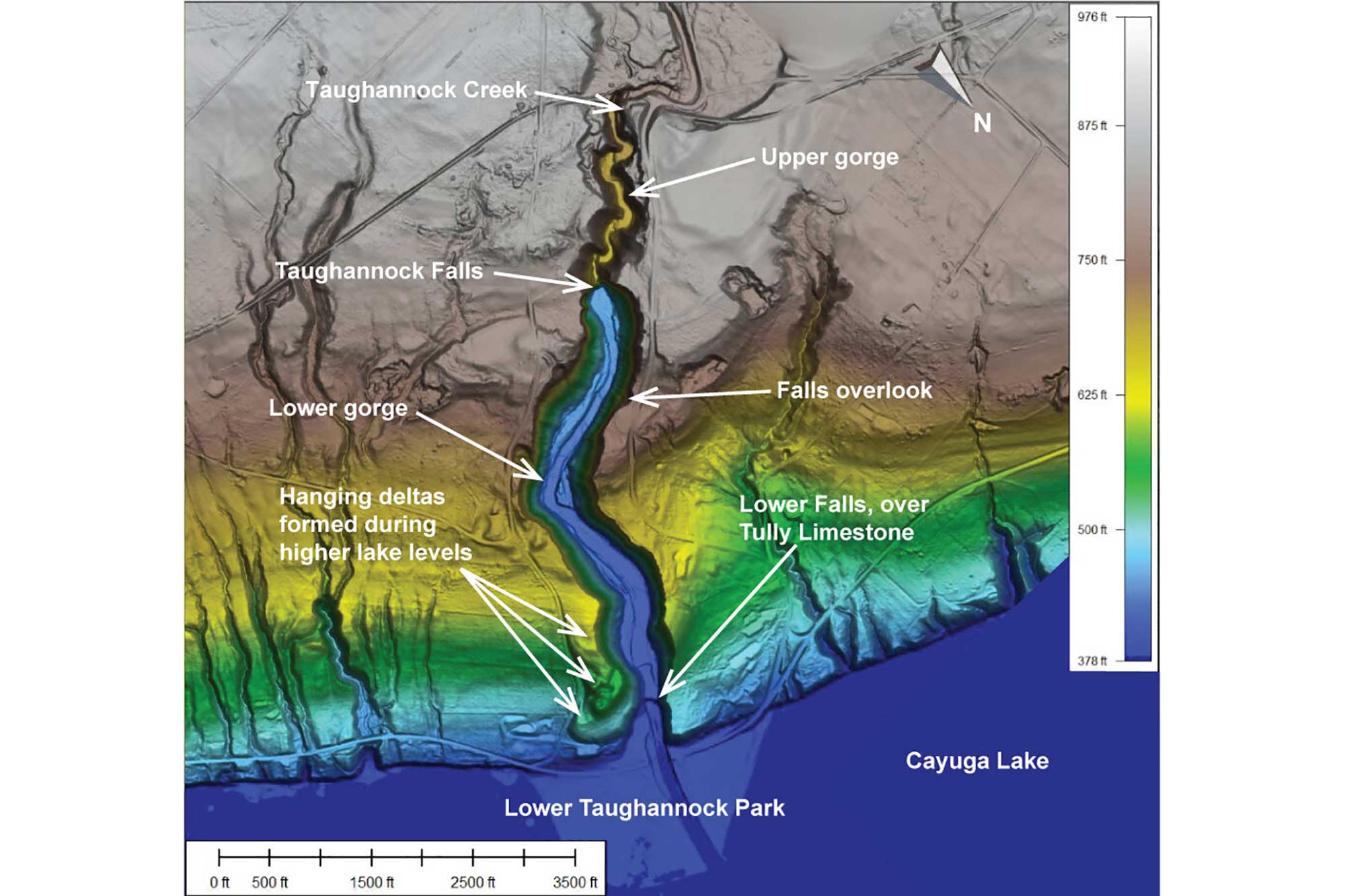 Taughannock Gorge might have been cut and filled during more than one glacial-interglacial episode. The image below shows how this process took place over time.

Model for the formation of gorges similar to Taughannock Falls. Left: A hanging valley formed as a glacier retreated. At this stage of its development, Taughannock Falls would have spilled directly into Cayuga Lake. Right: Over time, the waterfall receded, forming a gorge as the water cut through and eroded the weak shale overlying the resistant Tully Limestone. Images modified from originals by J. Houghton first published in The Teacher-Friendly Guide to the Geology of the Northeastern U.S. by Jane Ansley (published by the Paleontological Research Institution) (CC BY-NC-SA 4.0 license).

The 0.75-mile (1.2-kilometer) hike from the parking lot to the falls carries you through a rather flat, broad, very high-walled gorge. This shape is in marked contrast to the more stair-step form of many of the other gorges. This is due largely to the relative homogeneity of the Geneseo Formation through which the stream has cut. With few resistant layers to form ledges, the soft shale has been carried away almost completely, down to the harder Tully Limestone at the bottom of the gorge. 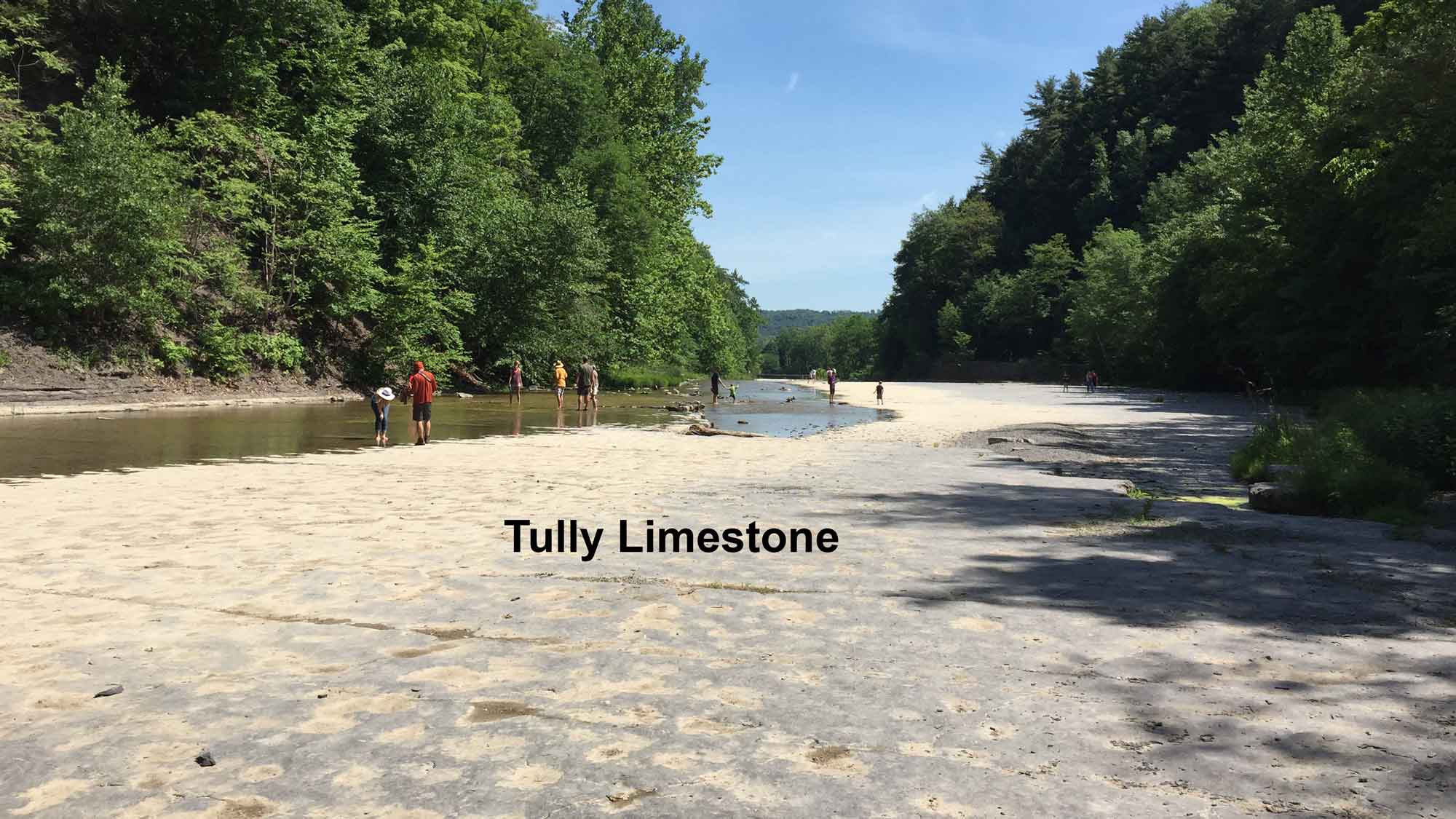 East-facing view of the resistant Tully Limestone at the base of Taughannock gorge and near the Lower Falls. Note that the creek flows along the north side of the creek bed, reflecting the fact that the strata here are dipping at a very shallow angle towards the north. Photograph by Jonathan R. Hendricks for PRI's [email protected] project (CC BY-NC-SA 4.0 license).

Tully Limestone forms the top of the small waterfall nearest to the lake, known as Lower Taughannock Falls, which is visible from Highway 89. Below this unit is the Moscow Formation, which consists of much softer siltstone. In the photograph below, one can see where the more resistant Tully Limestone overhangs a gap where the Moscow Formation has been more extensively weathered. 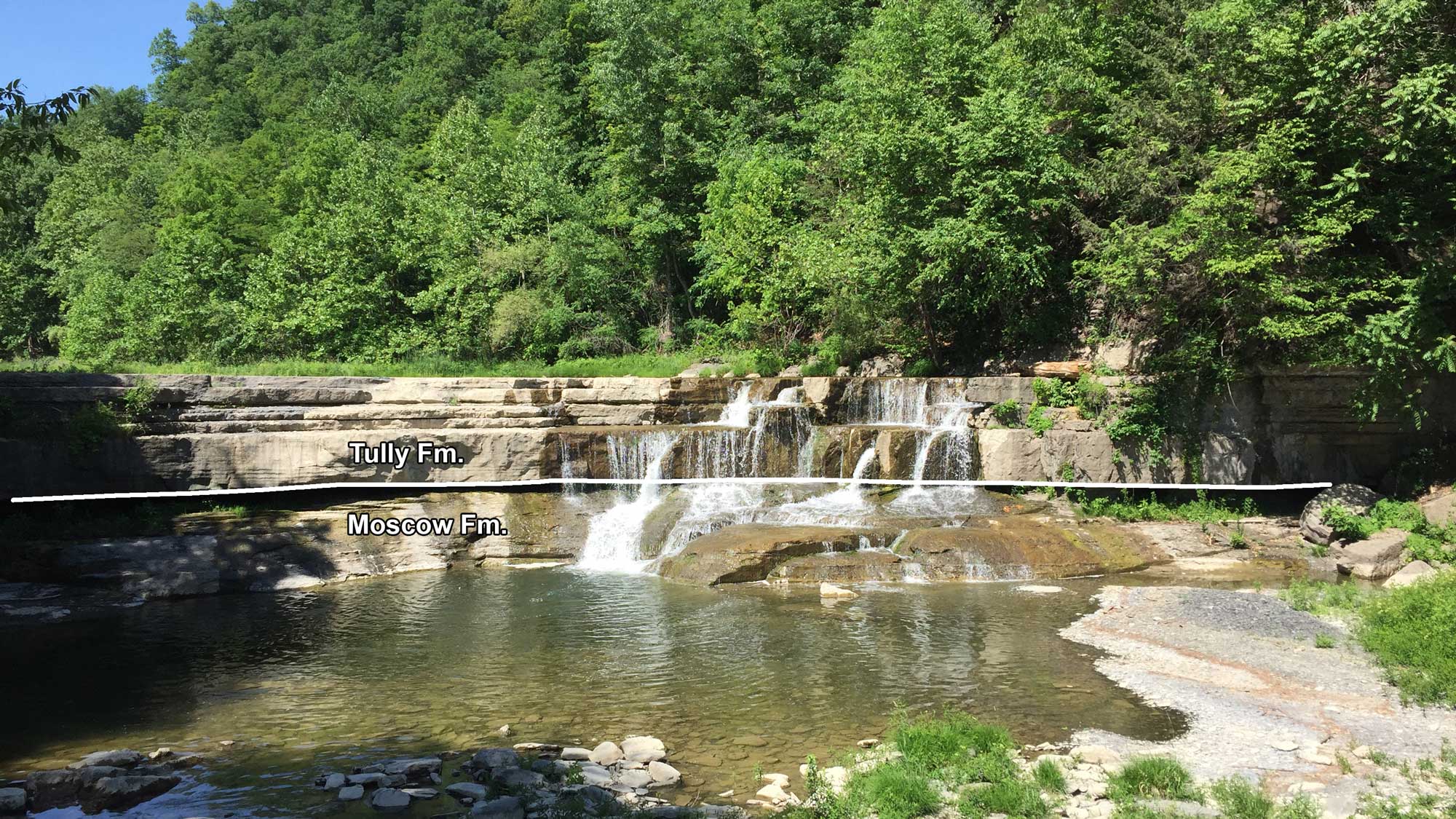 The natural beaches around Cayuga Lake—at Taughannock Falls and Stewart Park in Ithaca, for example—are made of pebbles rather than sand. This is because there is no natural source of abundant sand (such as layers of sandstone) anywhere in the area. The pebbles that make up these beaches are mostly rounded chips of shale and siltstone. They formed when pieces of rock eroded out of the gorges and cliffs around the lake and then were tossed over and over by waves striking the shore.

Sometimes a small point of weakness (sometimes caused by weathering out of a trace fossil or fossil crinoid stem) will allow the waves to wear a hole through one of these beach pebbles. These are locally known as “lucky stones” and are sometimes used in jewelry. 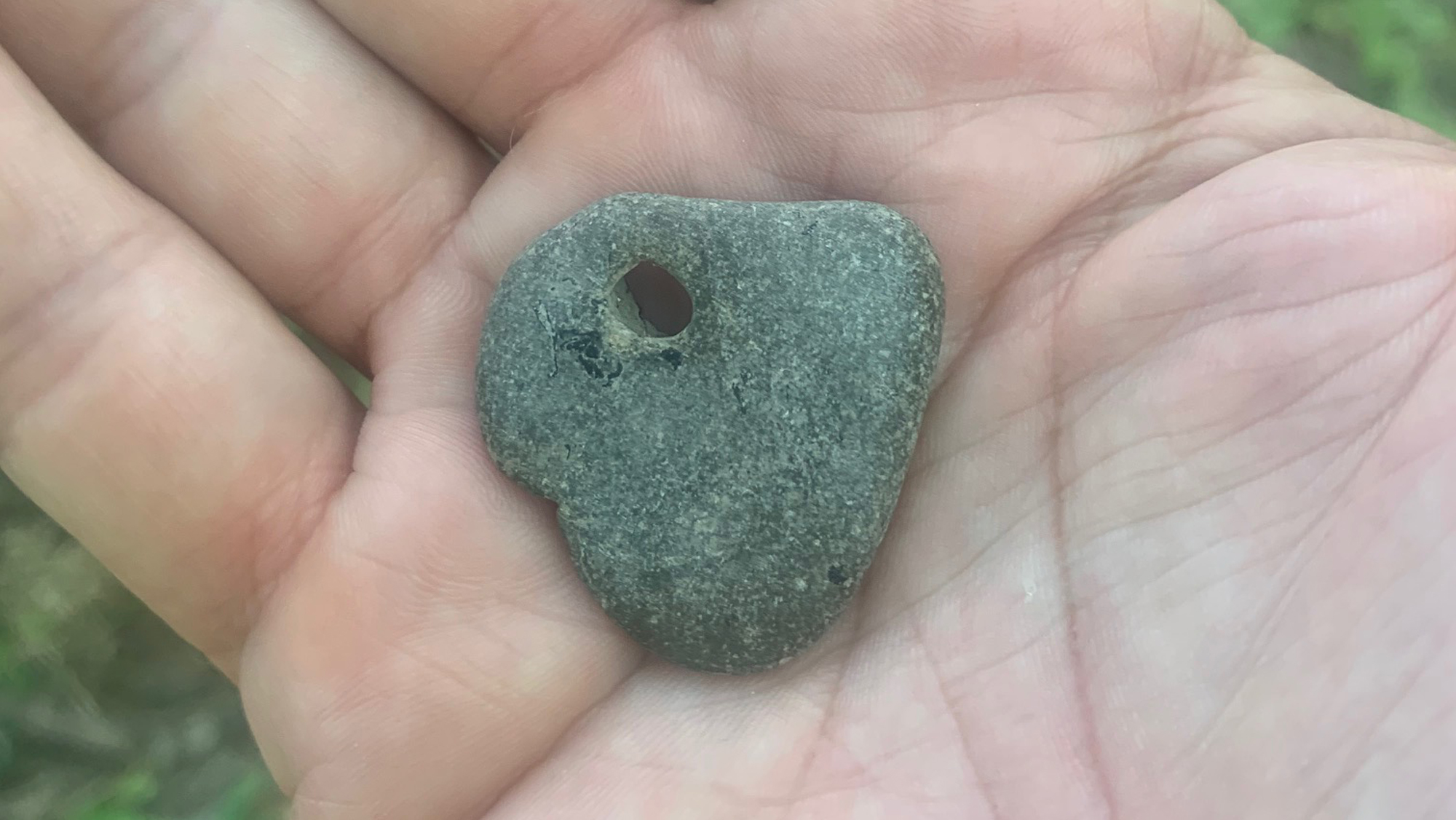 Example of a "lucky stone." Photograph provided courtesy of Kate Feather, who retains the copyright.

Eventually, the beach pebbles will be eroded into the mud from which they formed more than 360 million years ago, and this mud accumulates at the bottom of Cayuga Lake.