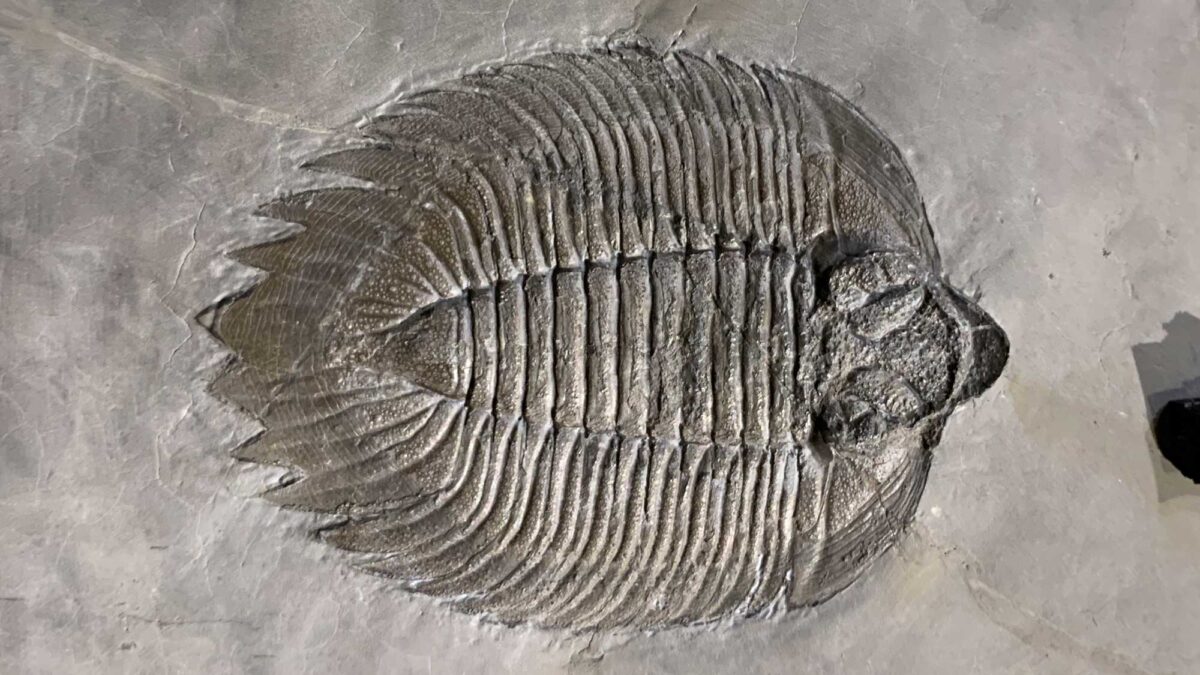 Sponges (Phylum Porifera) are the simplest major group of animals; their earliest fossils appear in the late Precambrian. Most modern sponges live in the ocean and usually have basket-shaped bodies. They live by filtering food and oxygen out of water pumped in through openings in their body walls and out through a larger opening at the top. The familiar bath sponge has no mineralized skeleton, but many other kinds of sponges have skeletons composed of tiny structures called spicules, which are made of calcium carbonate (CaCO₃) or silica (SiO₂). It is these skeletonized sponges that have the greatest likelihood of becoming fossils. Over their long history, such sponges have frequently been important contributors to reefs and reef-like mounds. 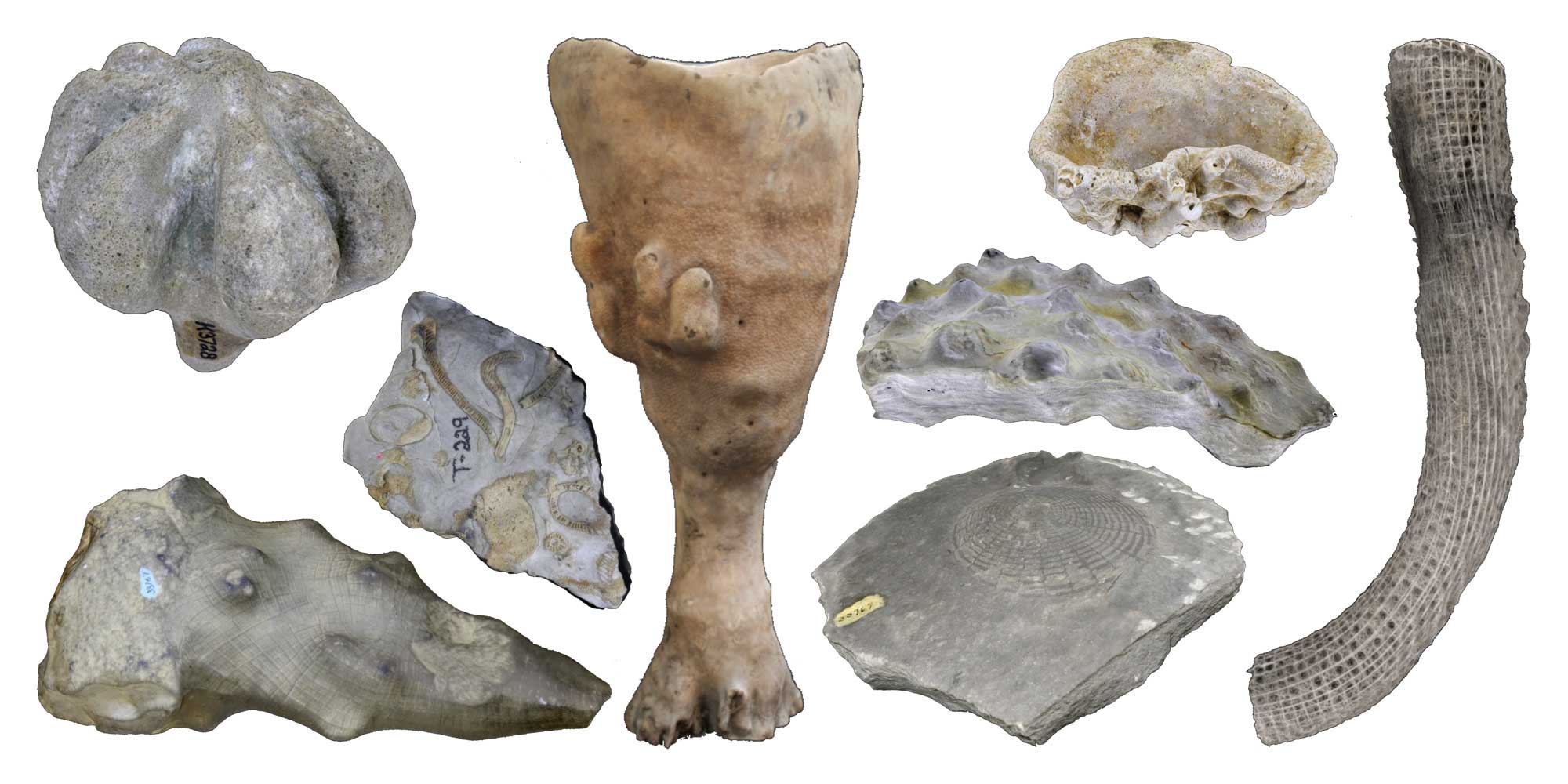 Different types of fossil and modern sponge specimens from the collections of the Paleontological Research Institution, Ithaca, New York.

Archaeocyathans were the first important animal reef builders, originating in the early Cambrian. These vase-shaped organisms had carbonate skeletons and are generally believed to be sponges. They went extinct in the late Cambrian, but were very diverse. Archeocyathids are often easiest to recognize in limestones by their distinctive cross-sections. Most paleontologists now recognize archaeocyathans as a subgrouping of sponges. 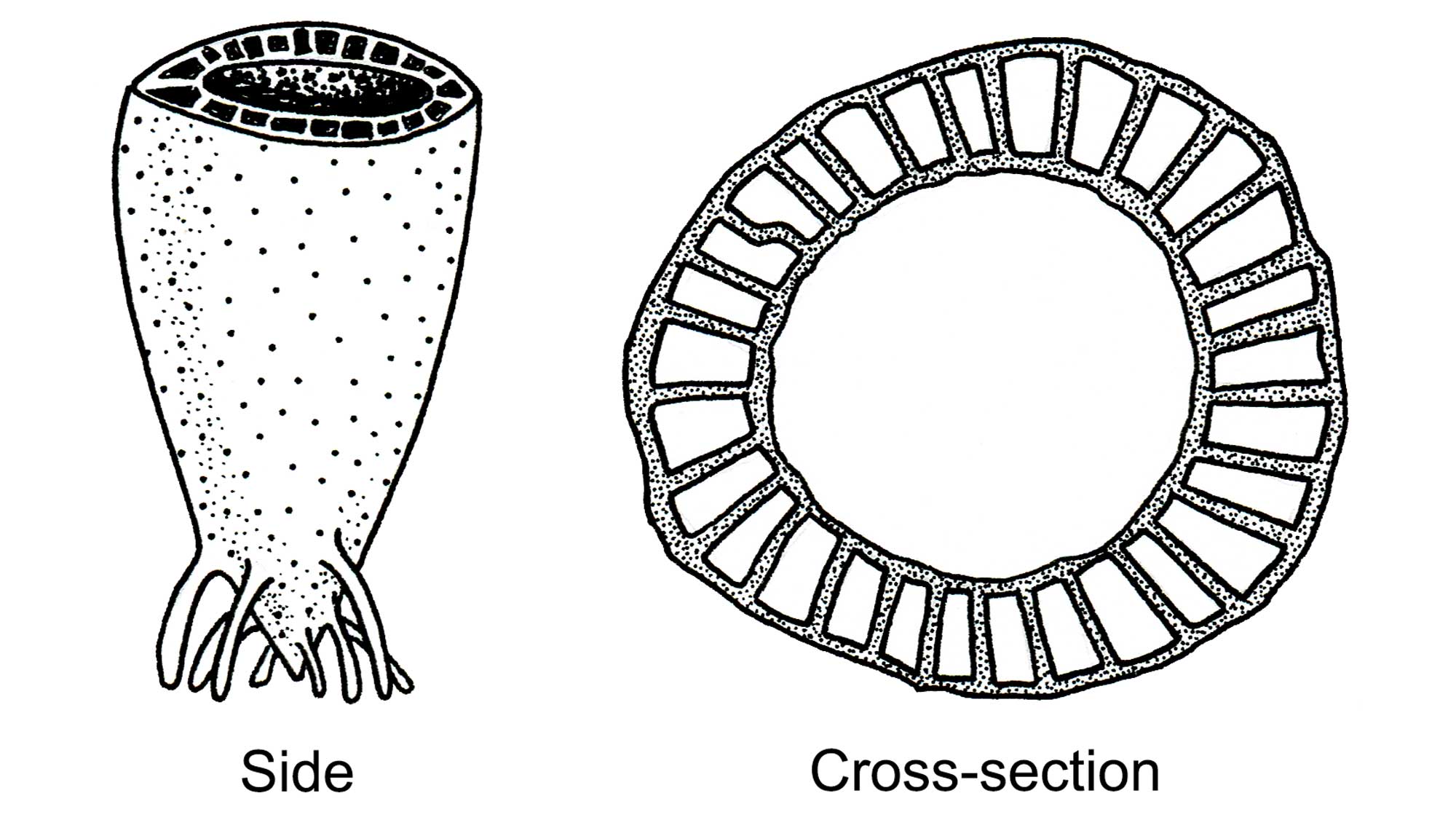 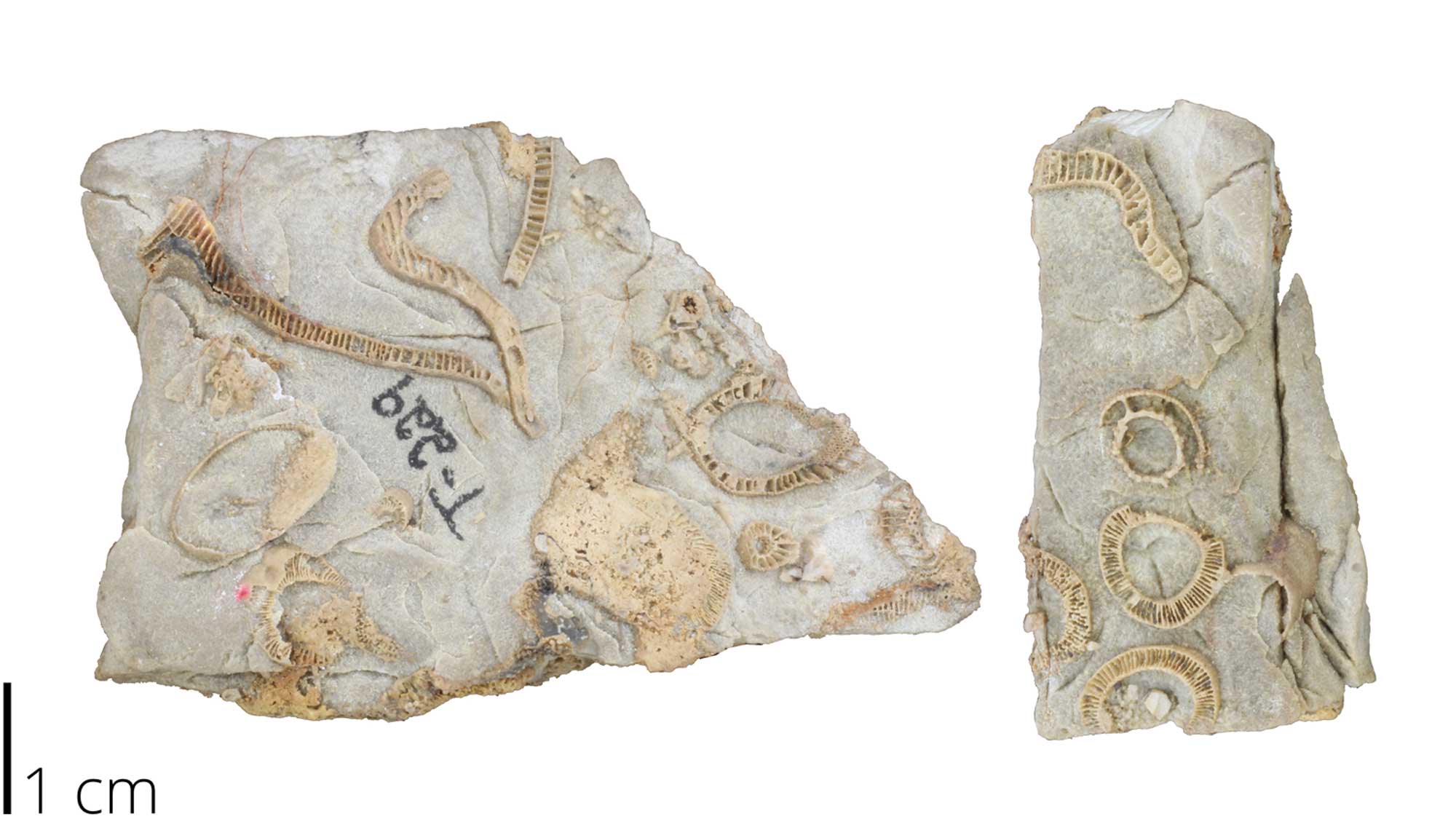 Archaeocyath fossils (T-229) from the teaching collection of the Paleontological Research Institution in Ithaca, NY. Image by Jaleigh Q. Pier is licensed under a Creative Commons Attribution-ShareAlike 4.0 International License.

Corals are sessile relatives of jellyfish and sea anemones. They possess stinging tentacles, which they use to feed on small planktonic prey. Each group of coral possesses distinctly shaped "cups" that hold individual animals, or polyps. Colonial corals live in colonies of hundreds or even thousands of individuals that are attached to one another. Solitary coral lives independently, as a single isolated polyp.

Rugose corals were both colonial and solitary. (Solitary forms are often called "horn corals.") Tabulate corals were exclusively colonial and produced a variety of shapes, including sheetlike and chainlike forms. These corals receive their name from the table-like horizontal partitions within their chambers. Both rugose and tabulate corals went extinct at the end of the Permian. Modern corals―scleractinians―first appeared in the Triassic, and include both solitary and colonial species. Many scleractinian corals have photosynthetic symbiotic algae in their tissues, called zooxanthellae. This algae provides nutrition to the coral polyps, helping them to grow more rapidly.

Rugose and tabulate corals. Rugose corals: left, the solitary horn coral Heliophyllum halli from the Devonian of New York (PRI 70755); right, the colonial rugose coral Acrocyathus floriformis from the Carboniferous of Illinois. Tabulate corals: left, the honeycomb coral Favosites favosus (PRI 76737) from the Silurian of Iowa; right, the chain coral Halysites catenularia from the Silurian Period. Specimens are from the collections of the Paleontological Research Institution, Ithaca, NY.

Trilobites are iconic Paleozoic fossils; they were more common in the Cambrian and Ordovician than in later periods, and became extinct at the end of the Permian. They were marine arthropods, and had well-defined head, tail, and thoracic (leg-bearing) segments. Most had large compound eyes, often with lenses that are visible to the naked eye. In life, they had antennae like many other arthropods, but since these were not mineralized, they only fossilize under exceptional circumstances. Many could roll up for protection, and several species also had large spines. 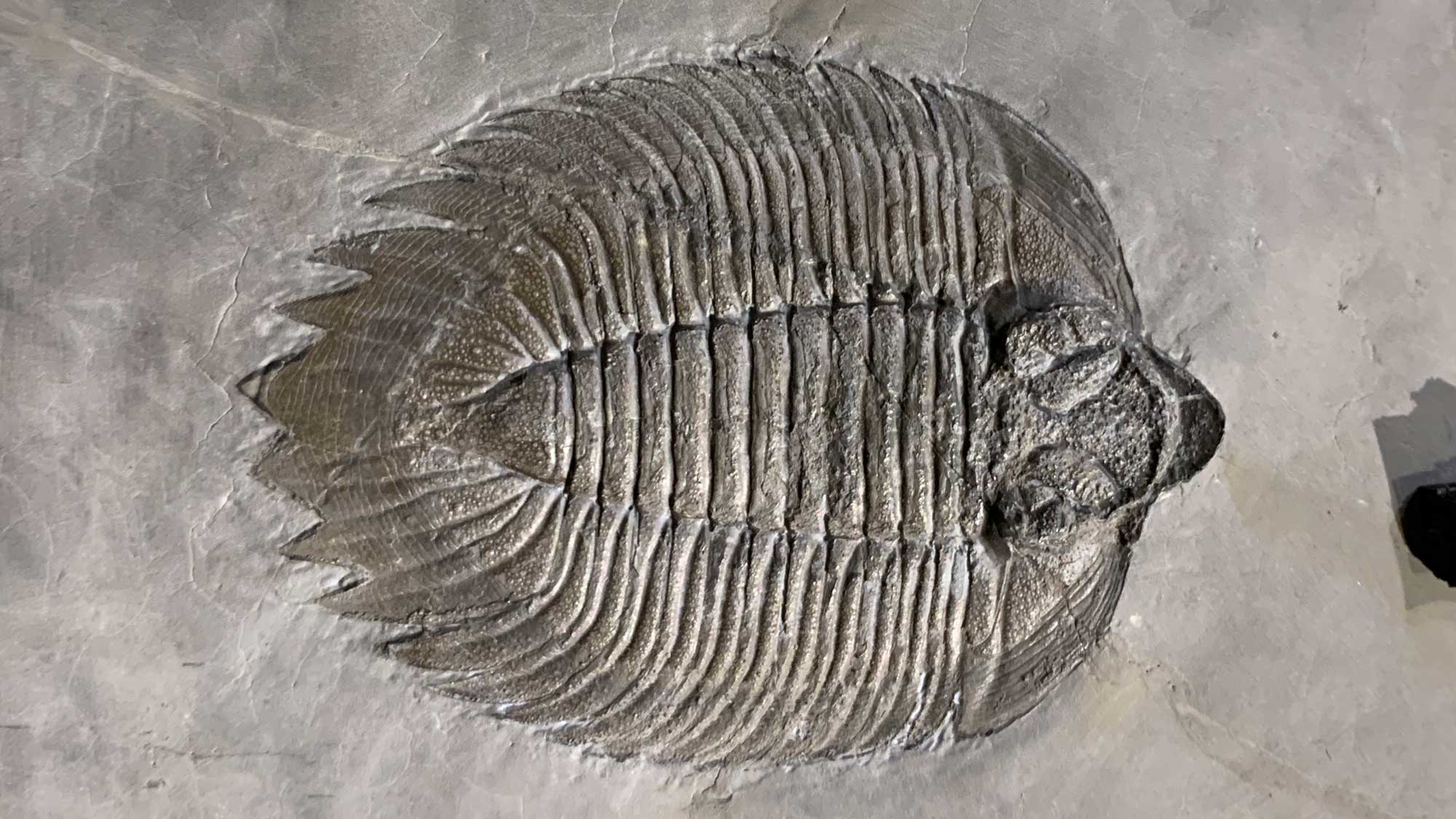 The Silurian trilobite Arctinurus boltoni, collected in Niagara County, New York. Specimen is on display at the Museum of the Earth, Ithaca, New York.

Brachiopods are filter-feeding animals that have two shells and are superficially similar to bivalves (such as clams).  Instead of being mirror images between shells (symmetrical like your hands), brachiopod shells are mirror images across each shell (symmetrical like your face). There are two major types of brachiopod shells, distinguished by how the two valves connect to each other: articulate brachiopods have tooth-and-socket hinges that tightly interlock, whereas inarticulate brachiopod shells lack hinge structures entirely. Internally, brachiopods are substantially different from bivalves, with a lophophore (filter-feeding organ made of thousands of tiny tentacles), and a small and simple gut and other organs. Bivalves, in contrast, have a fleshier body and collect their food with large gills. 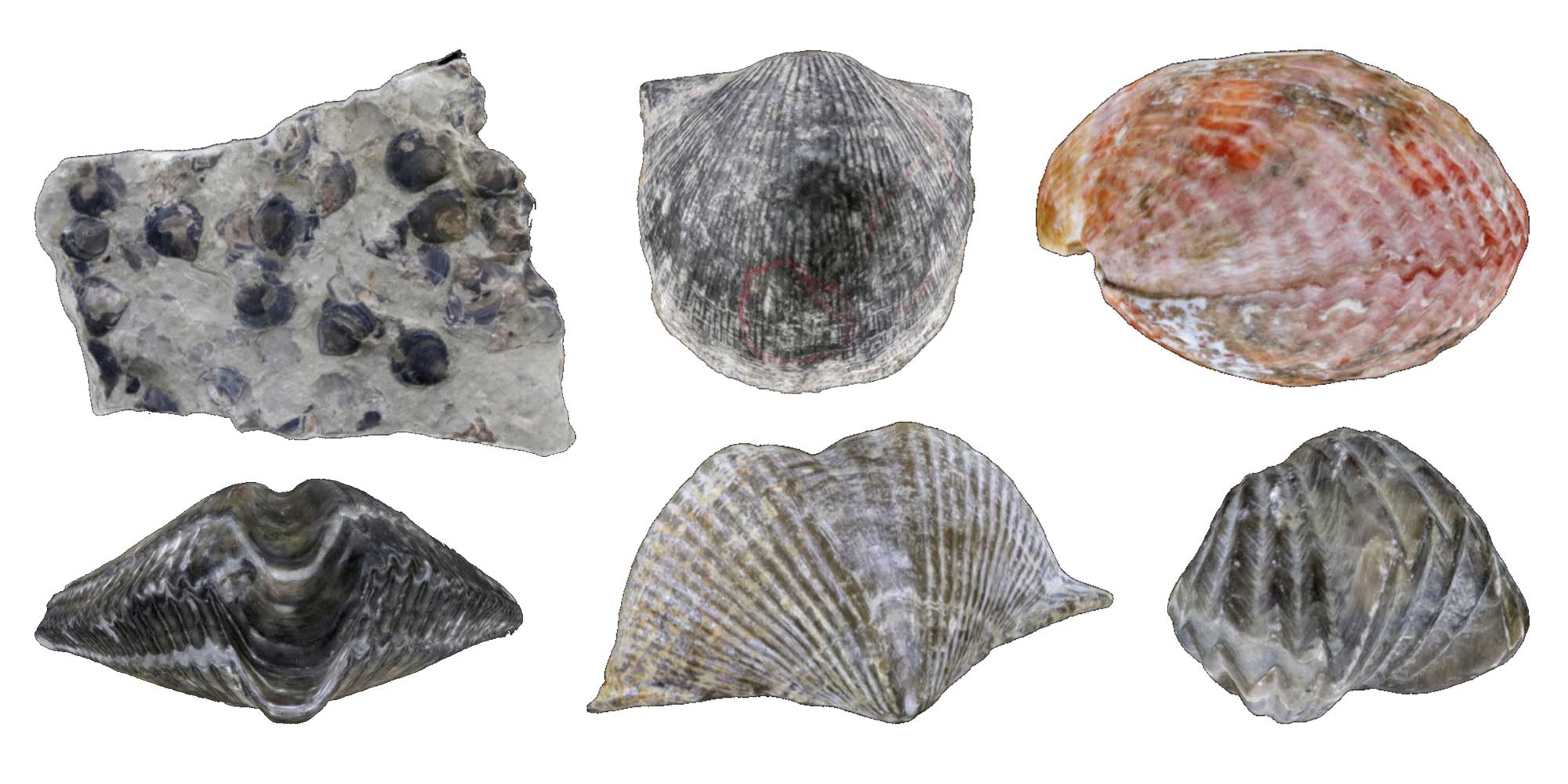 Examples of different types of fossil and modern brachiopods from the collections of the Paleontological Research Institution, Ithaca, NY.

Bryozoans are colonial invertebrates, many of which build elaborate skeletons of calcium carbonate. Bryozoans are common in today’s oceans, where they are frequently found encrusting rocks or shells. During the Paleozoic era, however, bryozoans commonly grew off of the sea floor as erect structures. After they died, their skeletons accumulated into thick beds of limestone. Although they do not appear to be, bryozoans are actually closely related to  brachiopods—both groups have the same distinctive feeding and respiratory structure, the lophophore. 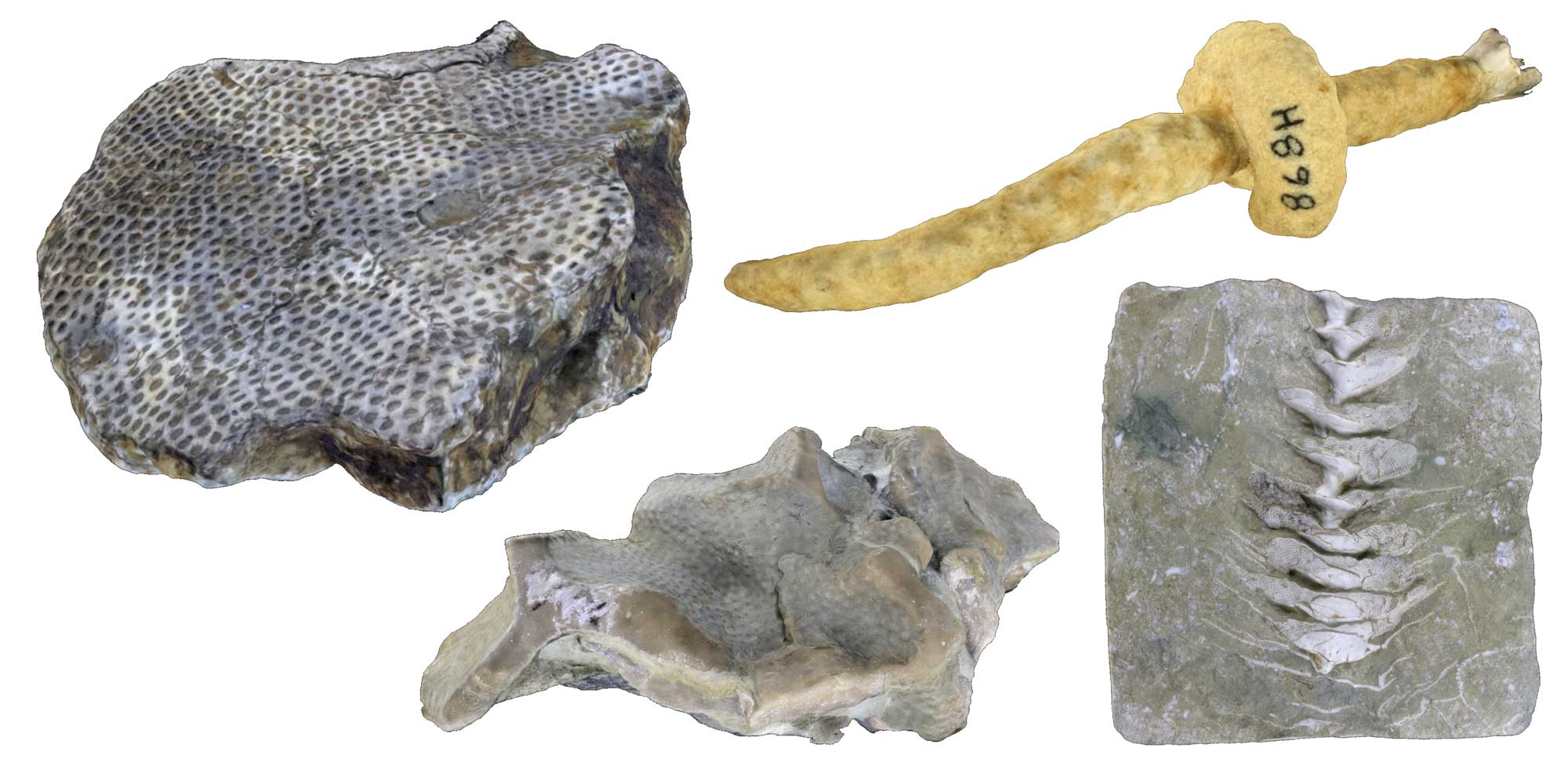 Bryozoan specimens from the collections of the Paleontological Research Institution, Ithaca, New York.

Clams and their relatives, such as mussels, scallops, and oysters, are mollusks possessing a pair of typically symmetrical shells. Most are filter feeders, collecting food with their gills. Paleozoic bivalves typically lived on the surface of the sediment ("epifaunally"), but in the Mesozoic they evolved the ability to burrow more deeply into the sediment, becoming "infaunal." This innovation led to the rapid evolution of a large number of groups present in today's oceans. 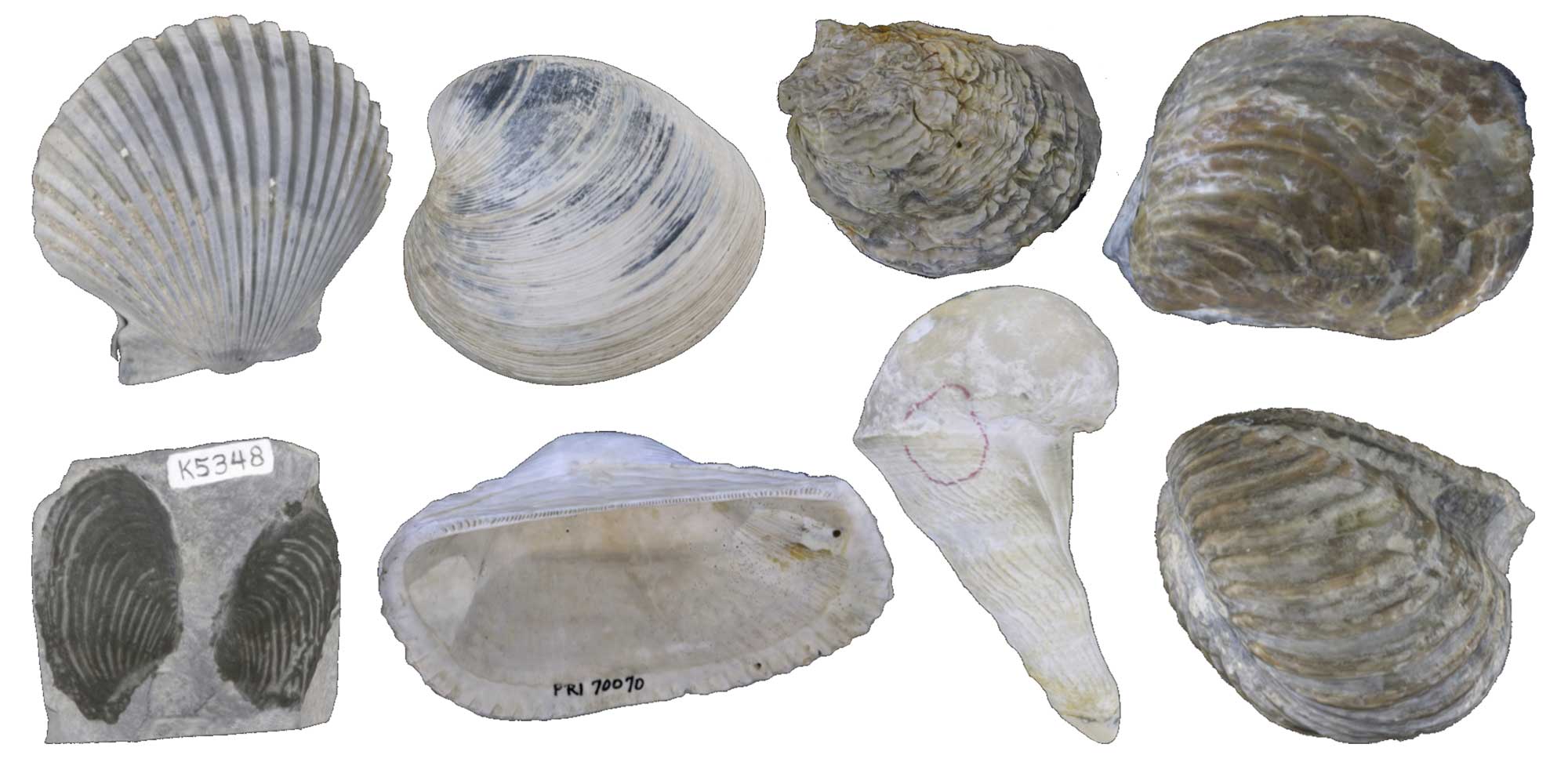 Examples of different types of bivalve fossils. Specimens are from the collections of the Paleontological Research Institution, Ithaca, New York.

Commonly known as snails, gastropod mollusks encompass terrestrial, freshwater, and marine species, and include varieties with and without shells (e.g., slugs). Gastropods are among the most diverse groups of organisms—only insects have more named species. The soft parts of gastropods are generally similar to those of bivalves, but the former typically have coiled shells and are usually much more active. 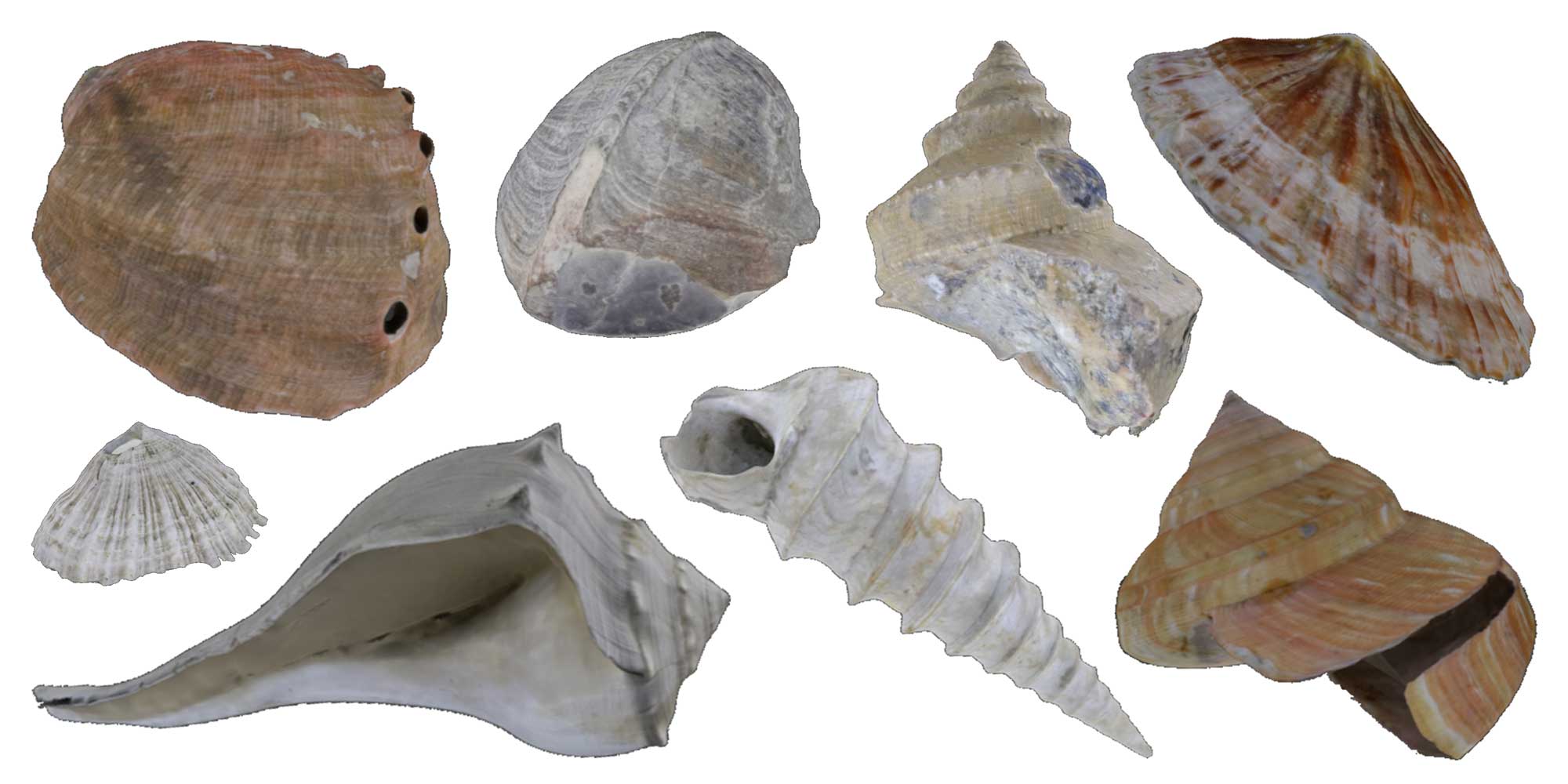 Examples of fossil and modern gastropods. Specimens are from the collections of the Paleontological Research Institution, Ithaca, New York.

Cephalopods, such as squid, octopods, nautiloids, ammonoids (see below), and belemnites, are mollusks with tentacles and beak-shaped mouths for catching prey. Some cephalopods such as belemnites and living cuttlefish have internal shells, while others have straight or coiled shells, such as those of ammonoids or nautiloids. Still other cephalopods, such as the octopus, have no shell. The mass extinction at the end of the Cretaceous (famous for eliminating the non-avian dinosaurs) also eliminated belemnites and ammonoids, which had been extremely diverse during the Mesozoic. 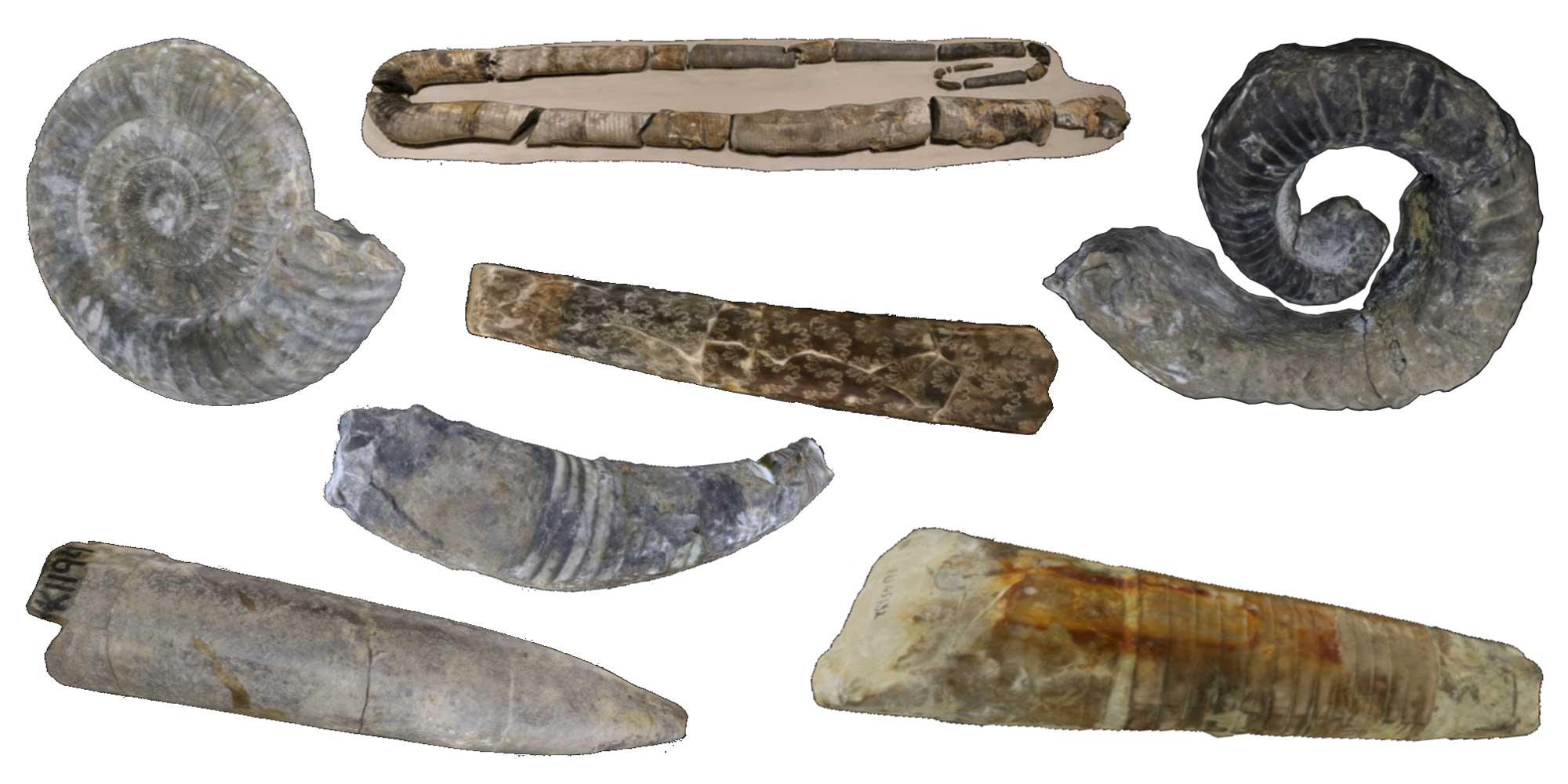 Different types of cephalopod fossils from the collections and exhibits of the Paleontological Research Institution and its Museum of the Earth, Ithaca, New York.

Ammonoids are a major group of cephalopods that lived from the Devonian to the end of the Cretaceous. Both nautiloids (the group that today contains the chambered nautilus) and ammonoids have chambered shells subdivided by walls, or septa (plural of septum). These shells are frequently, but not always, coiled. The term "ammonoid" refers to the larger group of these extinct cephalopods, distinguished by complex, folded septa. Within ammonoids, "ammonites" is a smaller sub-group, distinguished by the extremely complex form of their septa. Ammonites were restricted to the Jurassic and Cretaceous periods. The form of the septa in nautiloids and ammonoids is not visible in a complete shell; it is most often seen in the trace of the intersection between the septum and the external shell. This trace is called a suture. Sutures are usually visible in fossils when sediment has filled the chambers of a shell, and the external shell has been broken or eroded away. 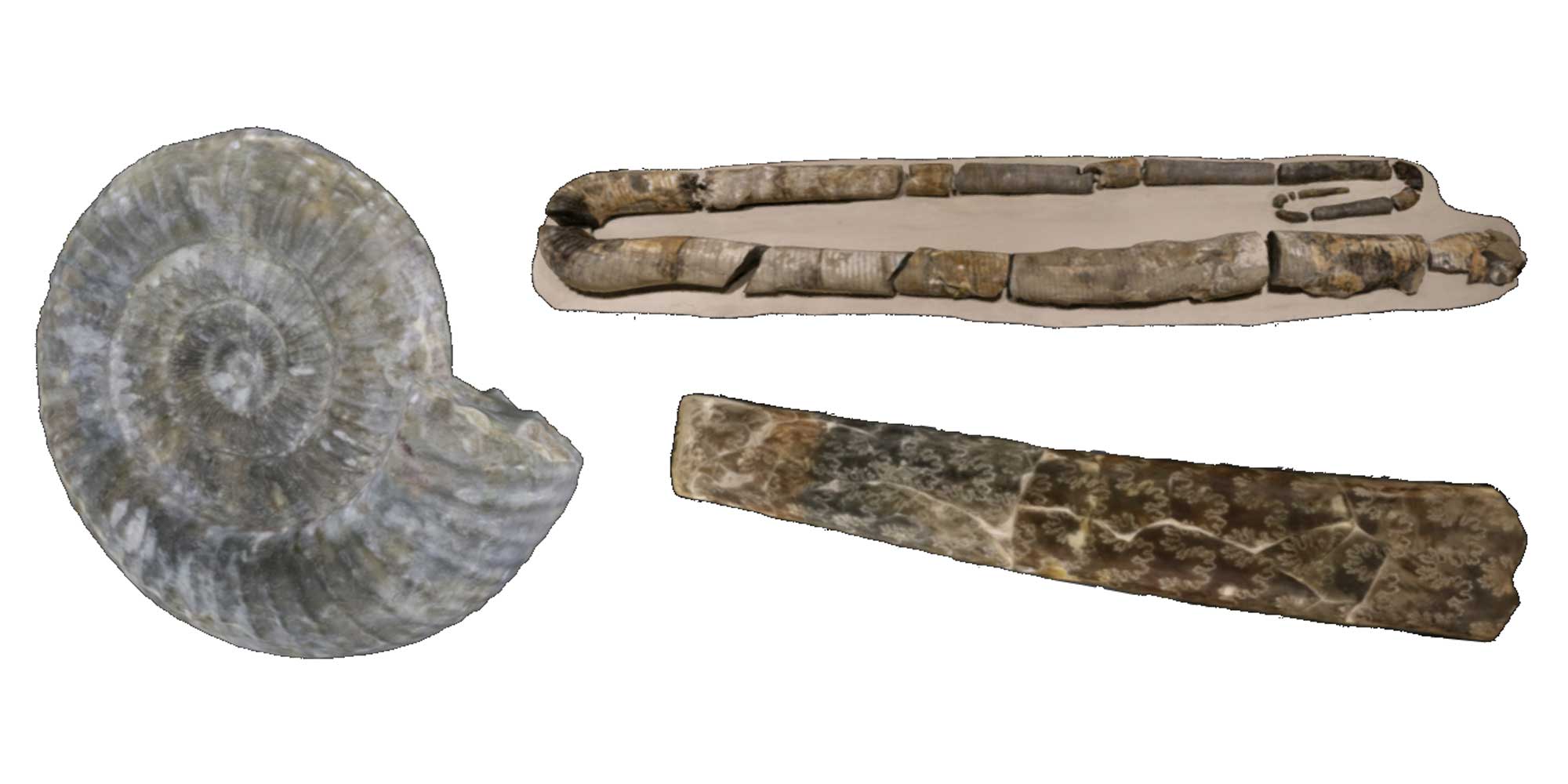 Ammonite ammonoid fossils. Left: Ammonite Dactylioceras commune from the Jurassic of England (PRI 76785). Top right: Heteromorph ammonite Diplomoceras maximum from the Cretaceous of Antarctica (PRI 13889). Bottom right: Baculite ammonite Baculites compressus from the Cretaceous of South Dakota (PRI 44571). Specimens are from the collections and exhibits of the Paleontological Research Institution and its Museum of the Earth.

Crinoids are echinoderms, related to sea urchins and sea stars. These invertebrate animals feed by using their arms to filter food out of the water. Most are attached to the sediment by a stalk that ends in a root-like structure called the holdfast—some forms, however, are free floating. Crinoid fossils are most commonly found as "columnals," pieces of the stalk that hold the head (calyx) above the surface. The calyx and the holdfast are only occasionally preserved as fossils. Crinoids are still around today; those in shallow water are mostly stalkless, while those with stalks are restricted to deep water. 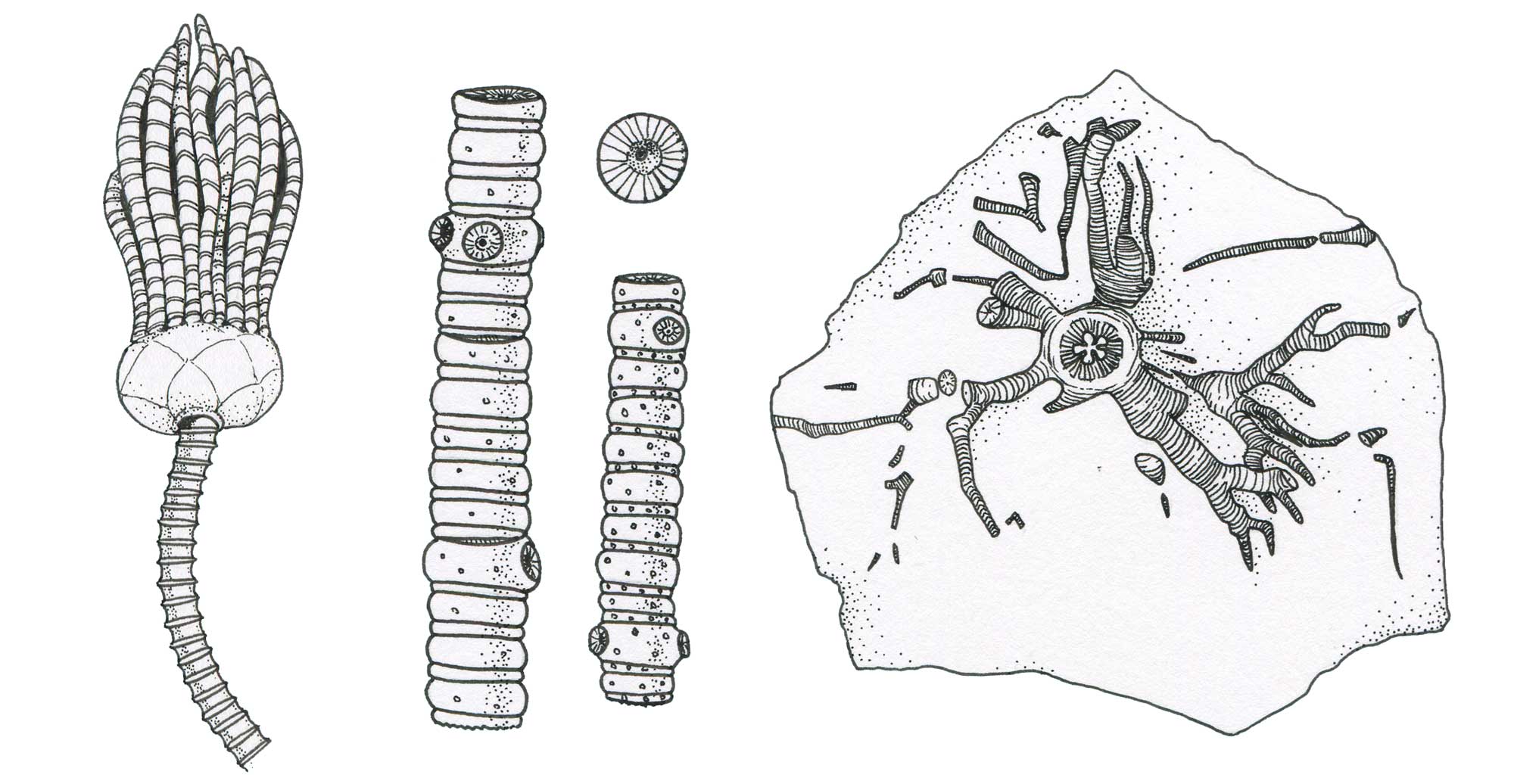 Parts of the crinoid skeleton. Left: the crown (calyx) and stem, about 15 cm (6 in) long. Middle: stem fragments. Right: the holdfast. Drawings by Christi Sobel. 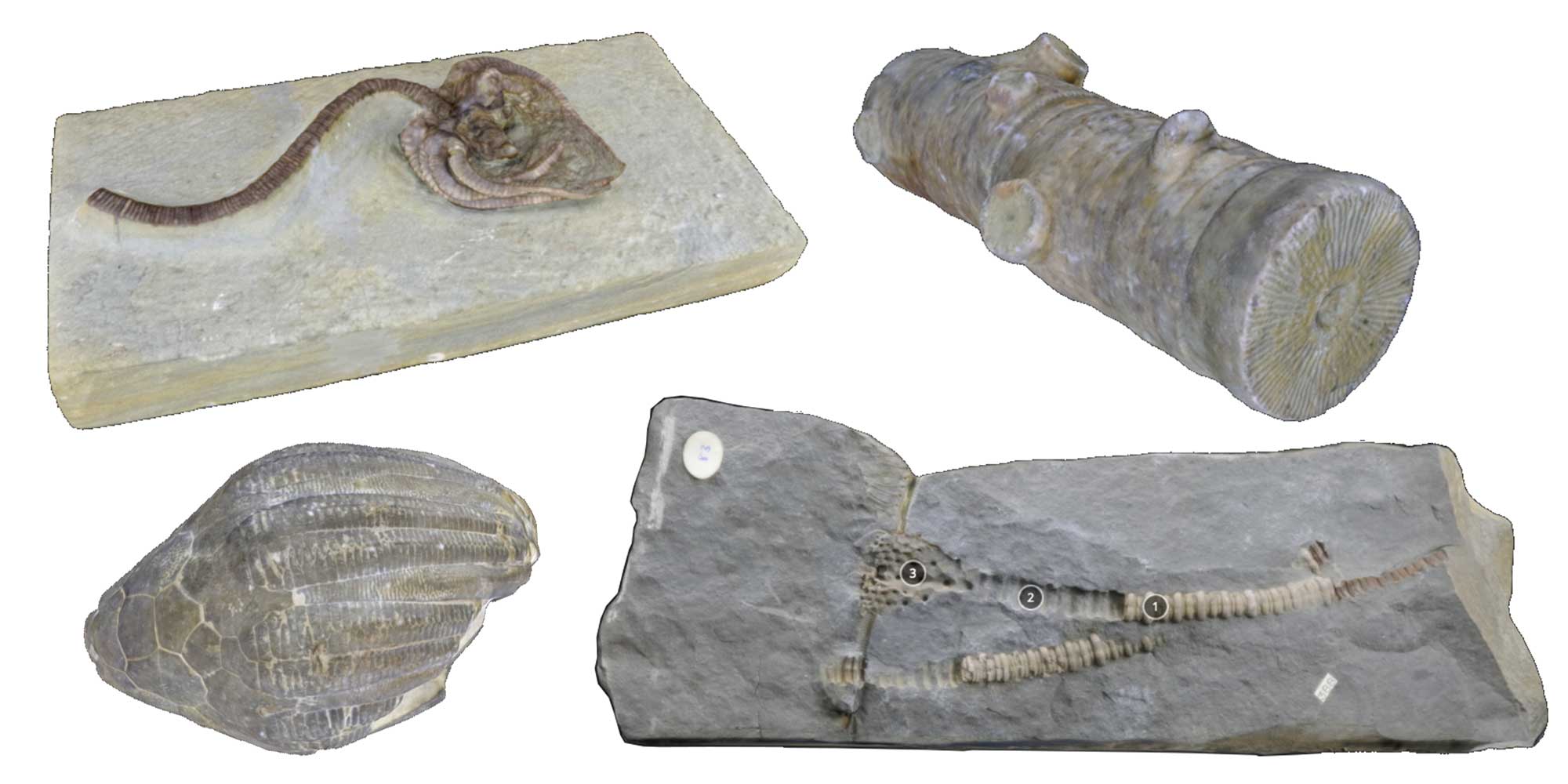 Crinoid fossils from the collections of the Paleontological Research Institution, Ithaca, New York.

Echinoids (sea urchins and sand dollars) are echinoderms, related to sea stars and crinoids. All echinoderms have external skeletons made of numerous plates of the mineral calcite (a form of calcium carbonate), and a unique water vascular system that drives most of their motion. Echinoids have rounded or flattened shells, called tests, which bear numerous spines. Tiny tube feet, connected to the water vascular system, extend through holes in the test and allow the animals to move on or within the sea floor. All echinoids exhibit the characteristic five-fold symmetry of echinoderms.

Graptolites (meaning "rock writing") are a group of colonial, free-floating organisms. Their fossils are found in Cambrian to Carboniferous rocks. Long thought to be extinct, we now know that they persist to the present day and are relatives of hemichordates such as acorn worms. Graptolites are frequently preserved as thin, black, sawbladelike streaks across black shale; tiny cups along these structures held  individual animals. Graptolites are often useful as index fossils.

Graptolites. Left: Specimen with many fragments of colonies of Climacograptus. Slab is 7.5 centimeters (3 inches) on each side. Right: Restoration of what graptolite colonies may have looked like when they were alive and floating in the water. Drawings by Christi Sobel. 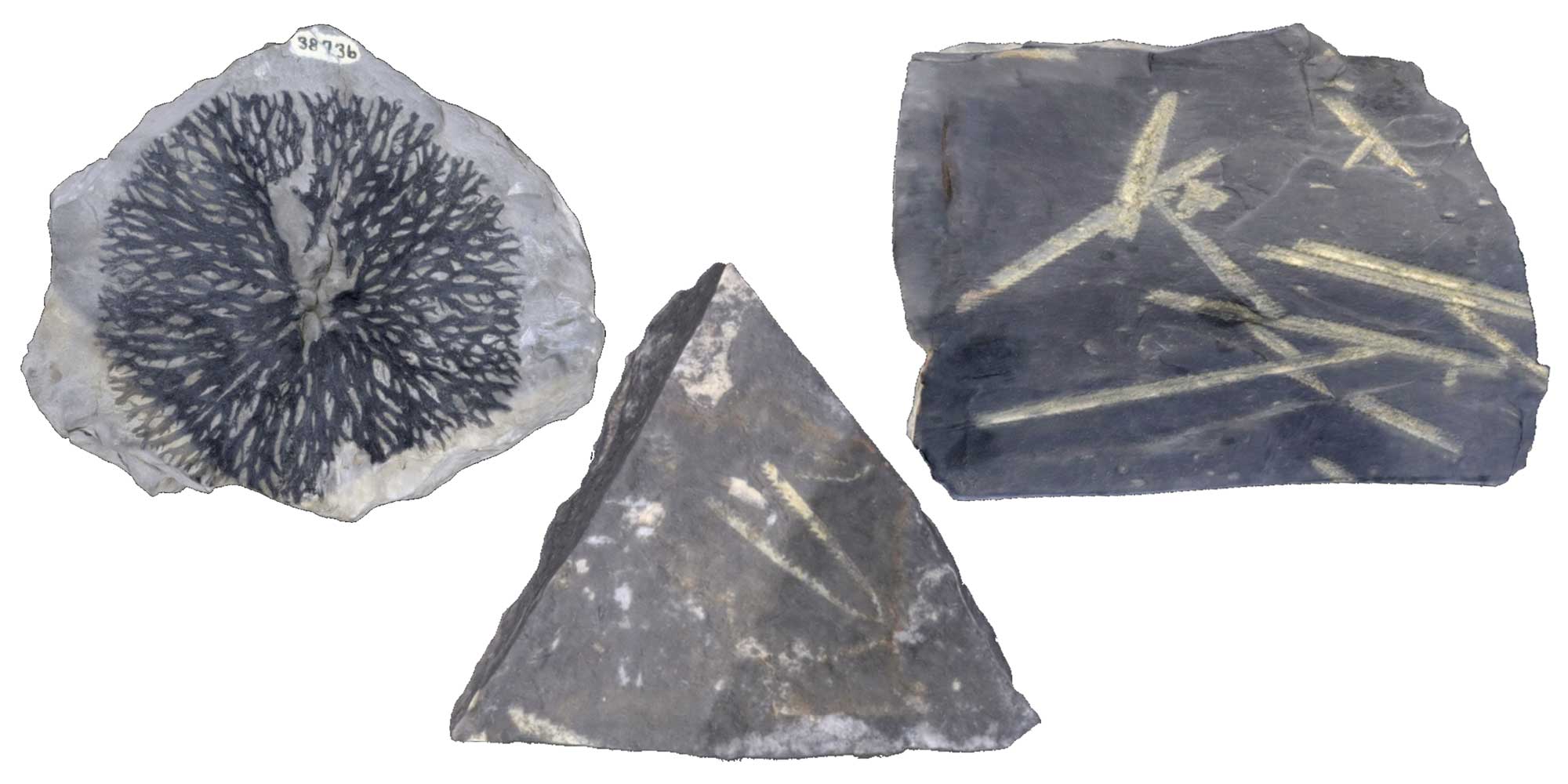 Examples of different types of graptolite fossils. Left: Palaeodictyota from the Silurian of New York (PRI 49831). Middle: Didymograptus artus from the Ordovician of Idaho (PRI 76792). Right: Glossograptus whitfieldi from the Ordovician of Washington (PRI 76774). Specimens are from the collections and exhibits of the Paleontological Research Institution and its Museum of the Earth, Ithaca, NY.

Conodonts are tiny tooth-shaped fossils (0.2–5 millimeters long) found in marine rocks of Cambrian through Triassic age. They have long been among the most important index fossils in these rocks, allowing the rocks to be dated through biostratigraphy. For many years, paleontologists did not know what kind of animal they belonged to, but in 1983 a very well-preserved fossil was found in Scotland that showed conodonts to belong to small fish-like animals just a few centimeters long that were distant relatives of bony fish. 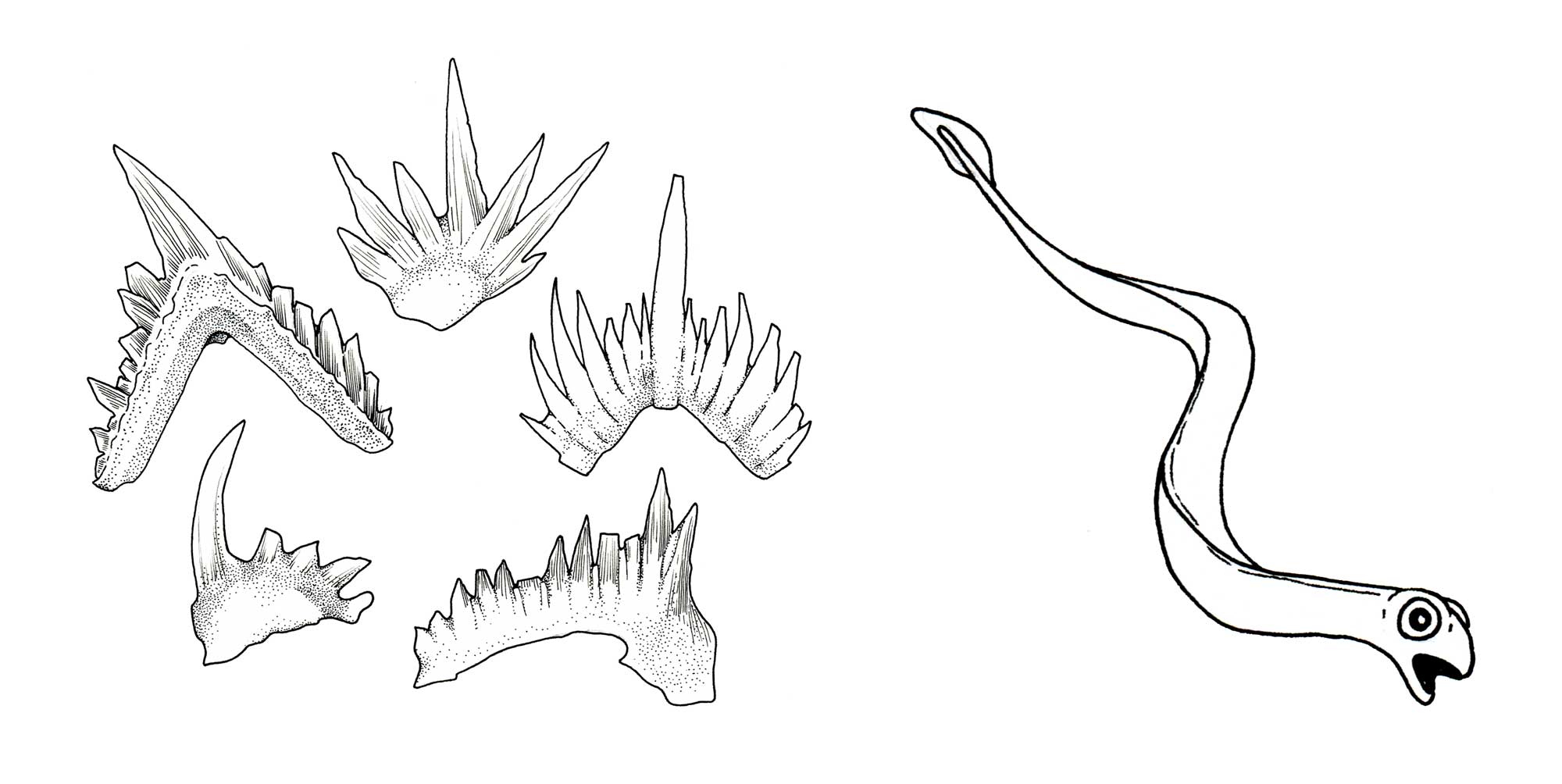