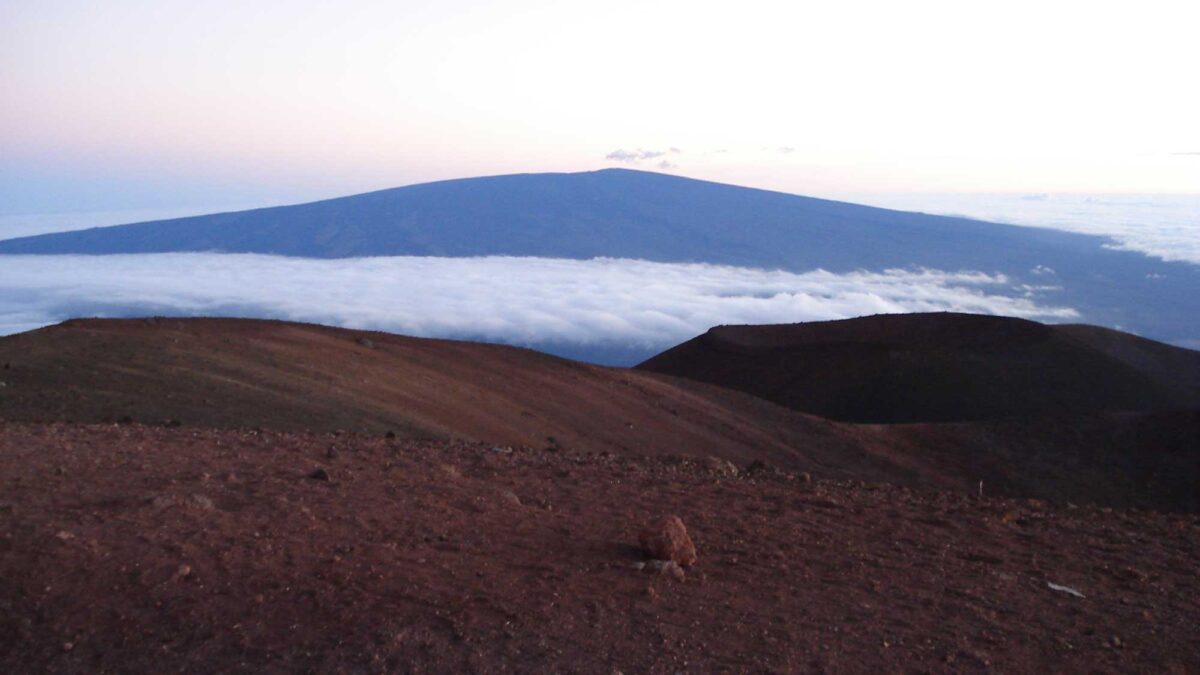 Snapshot: Overview of the topography of Hawaiʻi.

Image above: Mauna Loa in the distance, as viewed from the summit of Mauna Kea. Photograph by Jonathan R. Hendricks. 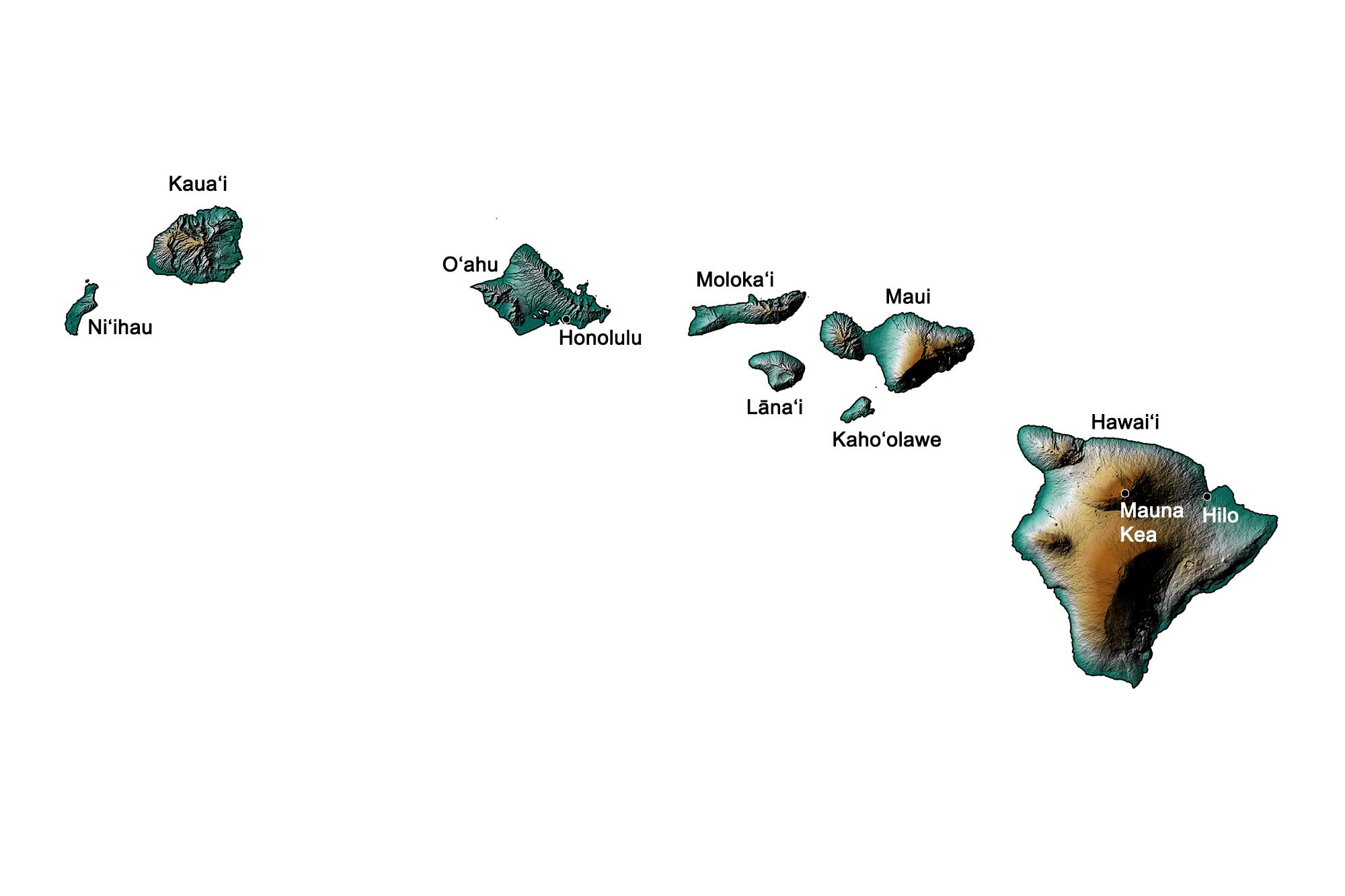 The topography of the Hawaiian Islands changes systematically as a function of age. The eight major islands and 129 minor islands are generally larger and taller in their youth, decreasing in size and height as they age.

The smooth, gently-sloping shield of a young volcano becomes progressively carved and steeper over time. These changes arise from several factors: constructive volcanic processes that dominate the early history of each island, mass wasting that occurs throughout the volcano’s life cycle, and the erosion and weathering that dominate once volcanism ceases.

It is often said that the volcanoes of Hawai‘i are the largest mountains on Earth, and this is true, depending on how one measures size. The peak of Mauna Kea is 4205 meters (13,796 feet) above sea level, while Mauna Loa rises to 4169 meters (13,677 feet). 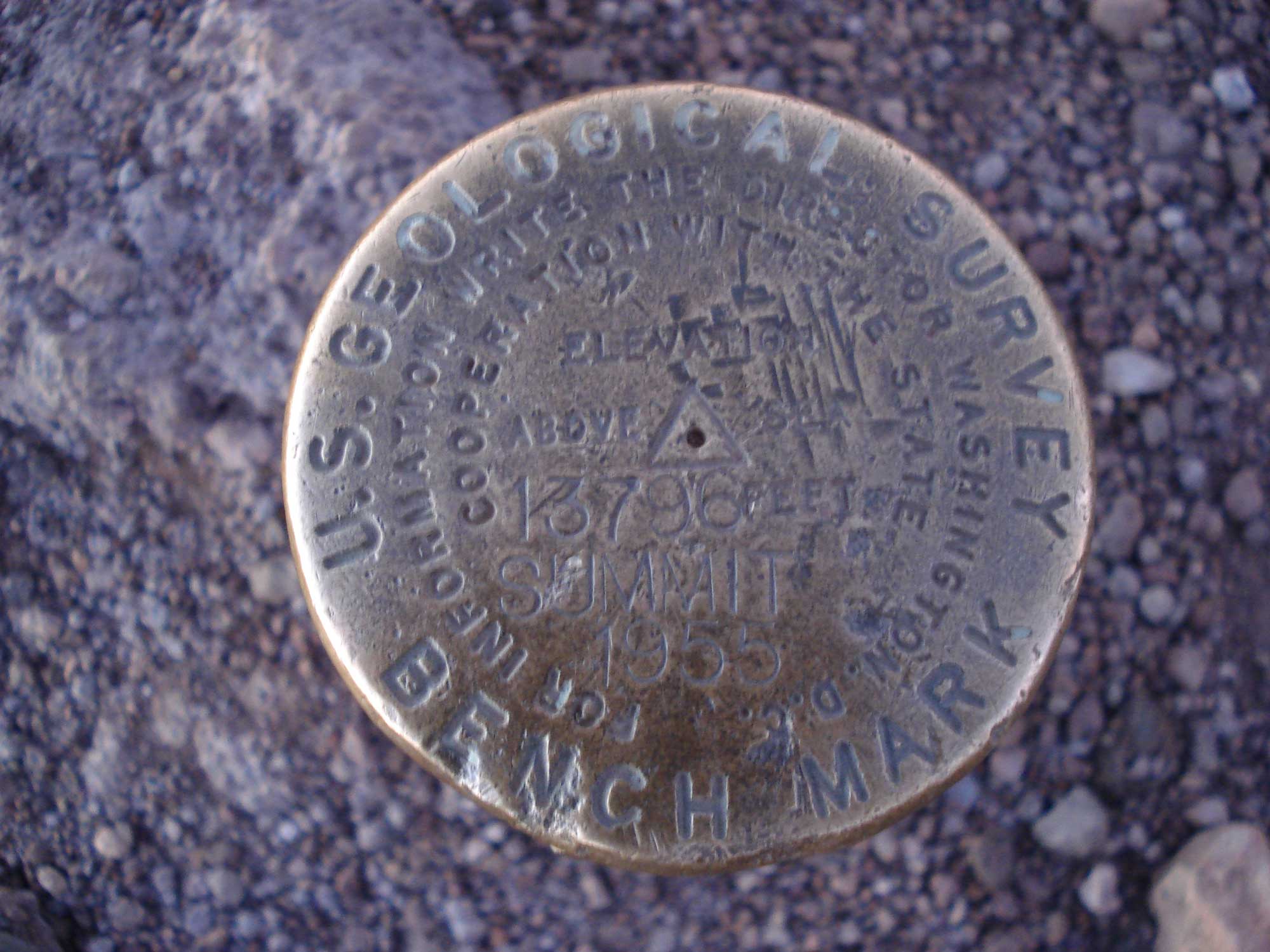 The base of the volcanic edifice extends another 5000 meters (16,400 feet) to the sea floor. Additionally, the weight of the volcanoes depresses the seafloor downward into the mantle for another 8000 meters (26,000 feet). As a result, the total height of both Mauna Kea and Mauna Loa is nearly 17,200 meters (56,420 feet).

The weight of the Hawaiian Islands depresses the lithosphere into the underlying mantle. The total height of Mauna Loa is 4170 meters (13,681 feet) above sea level plus an additional 13,000 meters (42,651 feet) to the top of the oceanic plate on which it sits. Image by Alexandra Moore, modified for the [email protected] project.

Once a volcano grows large enough to emerge from the ocean, its terrestrial surface begins to reflect the interaction of several processes. Overall, lava flows create a smooth surface at a low angle (3° in the case of Mauna Loa). However, small-scale topography (tens of meters [yards] in size) is superimposed on the smooth slope as weathering and seismic activity affect the landscape. While the shield topography sets the basic form of the original volcanic surface, local variations can be important for the later development of stream valleys and other features.

Dramatic mass wasting events, known as flank collapses, remove huge amounts of volcanic rock from the islands and leave behind giant scarps. Some of Hawai‘i’s most dramatic topographic features are the huge sea cliffs found on many of the islands as a result of these collapses. 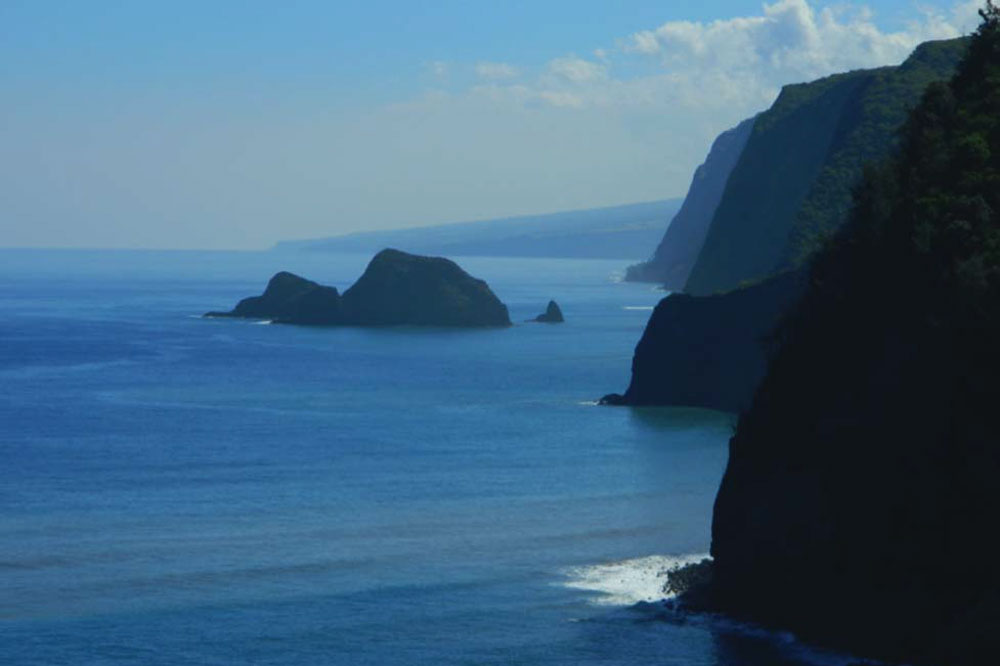 The cliffs in Kohala, Hawai‘i drop 125 meters (400 feet), while cliffs on Moloka‘i plunge 800 meters (2600 feet) into the ocean. When a flank collapse occurs on the windward side of an island, it creates a steep escarpment, which tends to enhance rainfall, maintaining high erosion rates and steepening dramatic cliffs in places like the Na Pali coast on Kaua‘i, the Ko‘olau range on O‘ahu, and the Waipi‘o area on Hawai‘i. 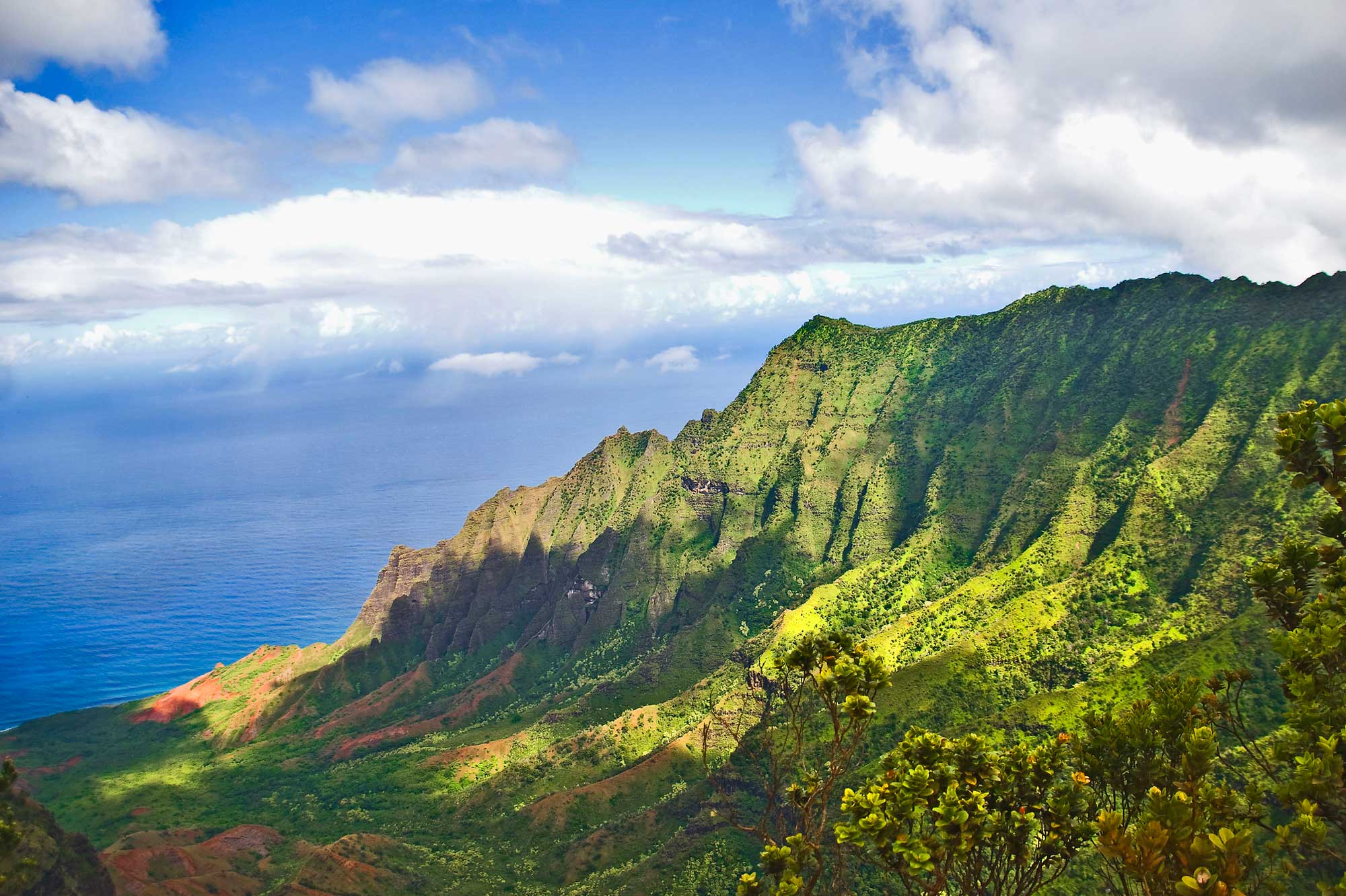 On the leeward (dry) sides, incision and relief are notably less pronounced.

Flank collapses result from gravitational stress on the massive volcanic shield. Some of this stress is directed outward, and the stresses cause the development of fractures dipping away from the summit. These faults can slip rapidly, resulting in a massive collapse into the ocean. As well as altering the topography and size of the islands, these mega-landslides leave huge debris fields on the sea floor that can extend more than 100 kilometers (60 miles) away from the islands. Studies have shown that at least 15 giant landslides—among the largest ever found on Earth—dissected the Hawaiian Islands. 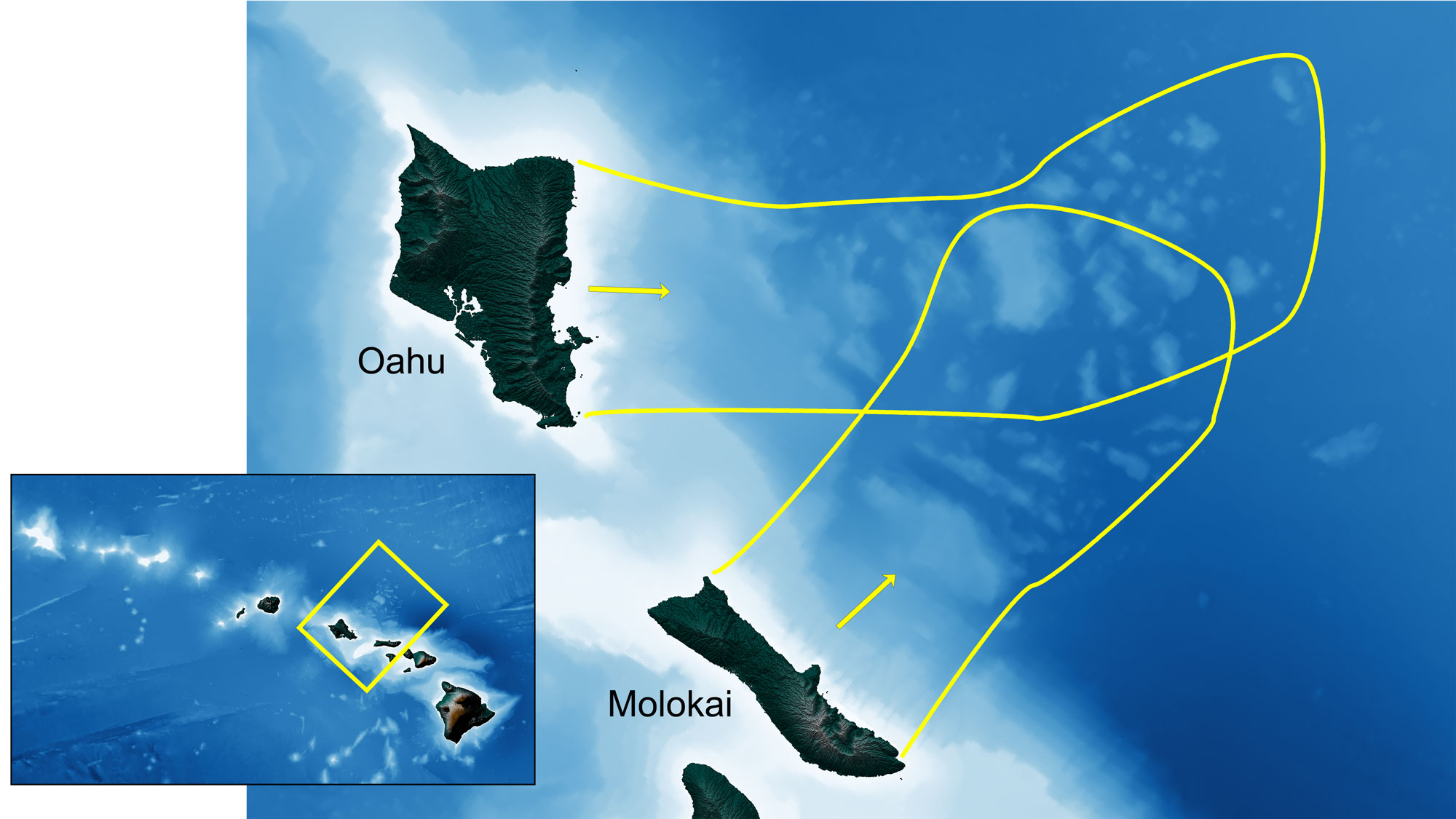 These flank collapses have left all of the islands with their distinctive coastal cliffs (pali in Hawaiian), and at least some of the landslides appear to have generated massive tsunamis. There is evidence across the Hawaiian Islands that rock and coral materials were deposited over 300 meters (1000 feet) above sea level by these events.

Examples of extensional collapse can be observed today—GPS measurements confirm that blocks of land on the flanks of Kīlauea are moving seaward at around 10 centimeters (4 inches) per year. This slow slip is punctuated by larger events that cause earthquakes. Flank collapse, first identified in Hawai‘i, has since been recognized as a feature of other high oceanic volcanic islands, such as Tenerife in the Canary Islands and Réunion in the Indian Ocean. The last major flank collapse in Hawai‘i occurred about 120,000 years ago, so we do not have a detailed picture of what one of these events looks like, nor of the warning signals that may occur prior to a large-scale failure.

Erosion in Hawai‘i is primarily driven by water. Erosion is concentrated on the windward slopes of each volcano, where higher precipitation forms perennial streams. On young islands nearly all leeward streams are intermittent, and thus have only episodic erosive power. Stream erosion incises the islands’ surfaces and modifi es hanging valleys left by fl ank collapses. Tall waterfalls are found where collapse generates steep topography more quickly than stream incision can wear it away. 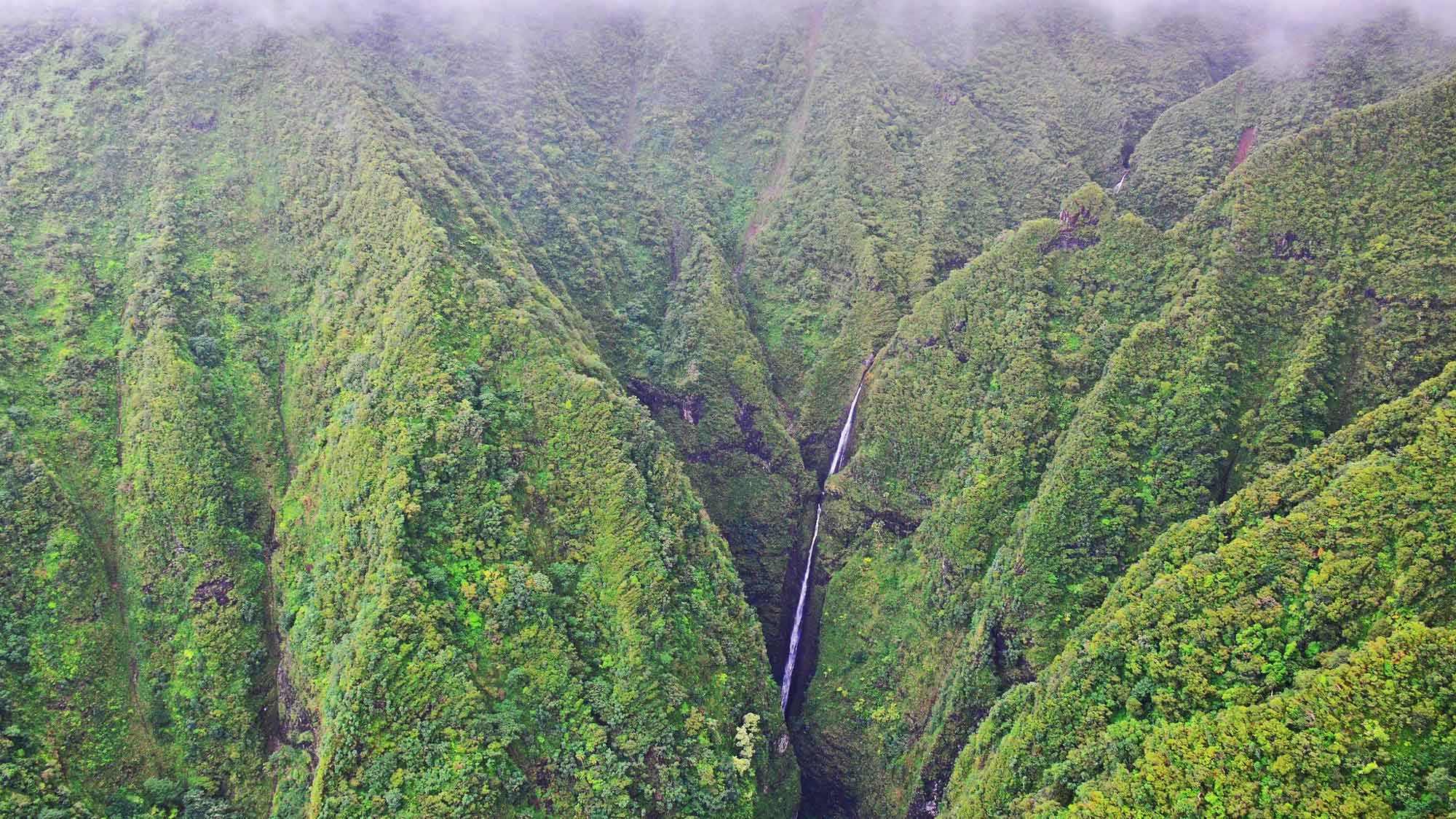 Stream valleys cut back into the flanks of the volcano, aided by pre-existing faults and underlying structures within the volcanic edifice. The number and size of stream valleys provides a clear indication of the age of the volcano on which they form. For example, on Hawai‘i Island, active Kīlauea and Mauna Loa show very little incision, while dormant Mauna Kea has a considerable number of deep, yet narrow, river gulches on its windward side.

The oldest volcano, Kohala (extinct), has spectacular erosional valleys on the windward side. On older islands, such as O‘ahu and Kaua‘i, the original shape of the volcano is diffi cult to see, as most of it has been removed. Examination of the topographic map of Kohala Mountain shows frequent sharp bends in the upper reaches of windward streams (especially upper Waipi‘o Valley). These bends mark the location of buried faults. Waipi‘o Valley itself is eroded into the contact between Kohala and Mauna Kea volcanoes. 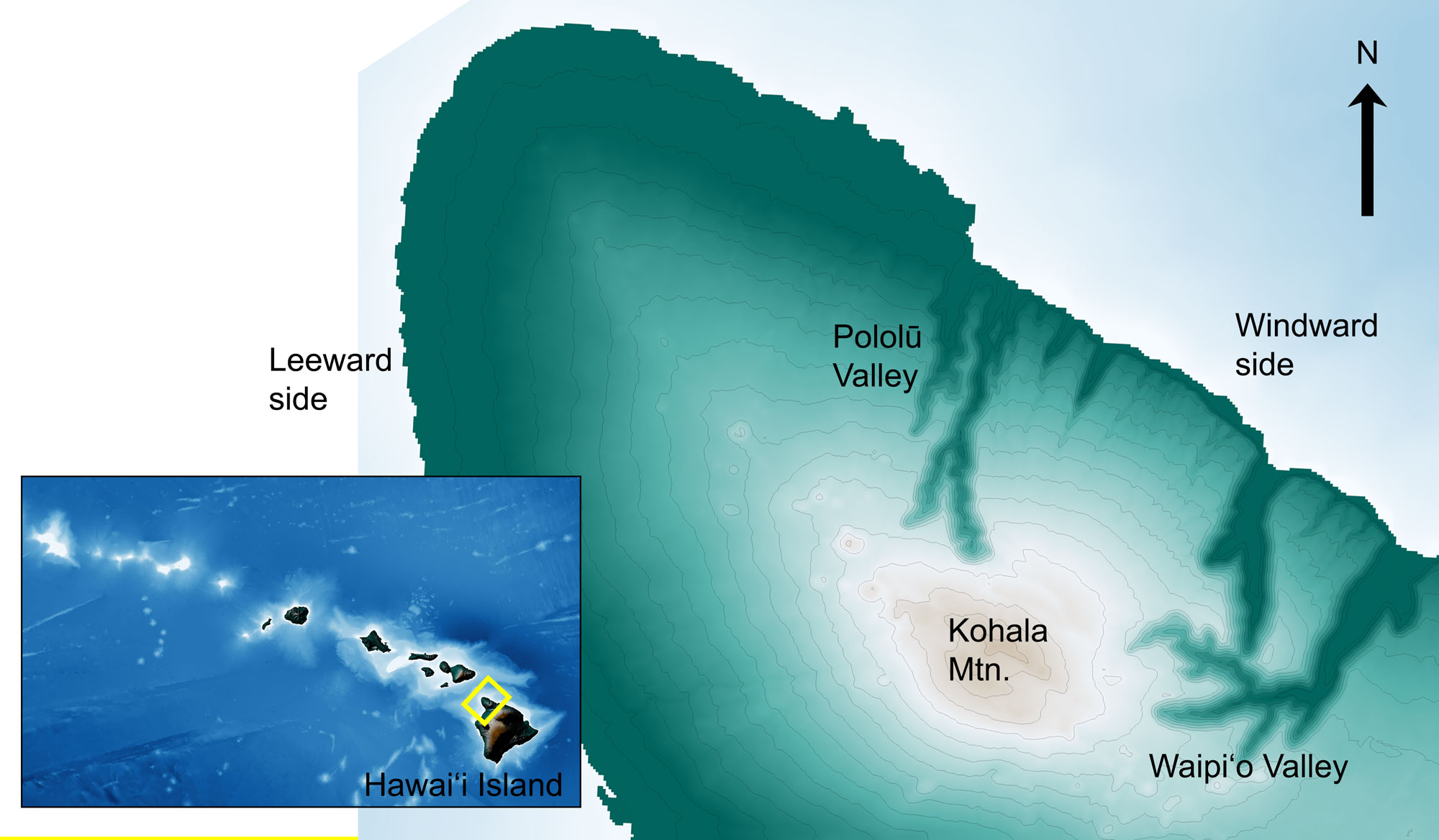 Similarly, on Kaua‘i, Waimea Canyon is located along an ancient fault system. Waimea Canyon is 16 kilometers (10 miles) long and up to 900 meters (3000 feet) deep, making it the largest canyon in the Hawaiian Islands. 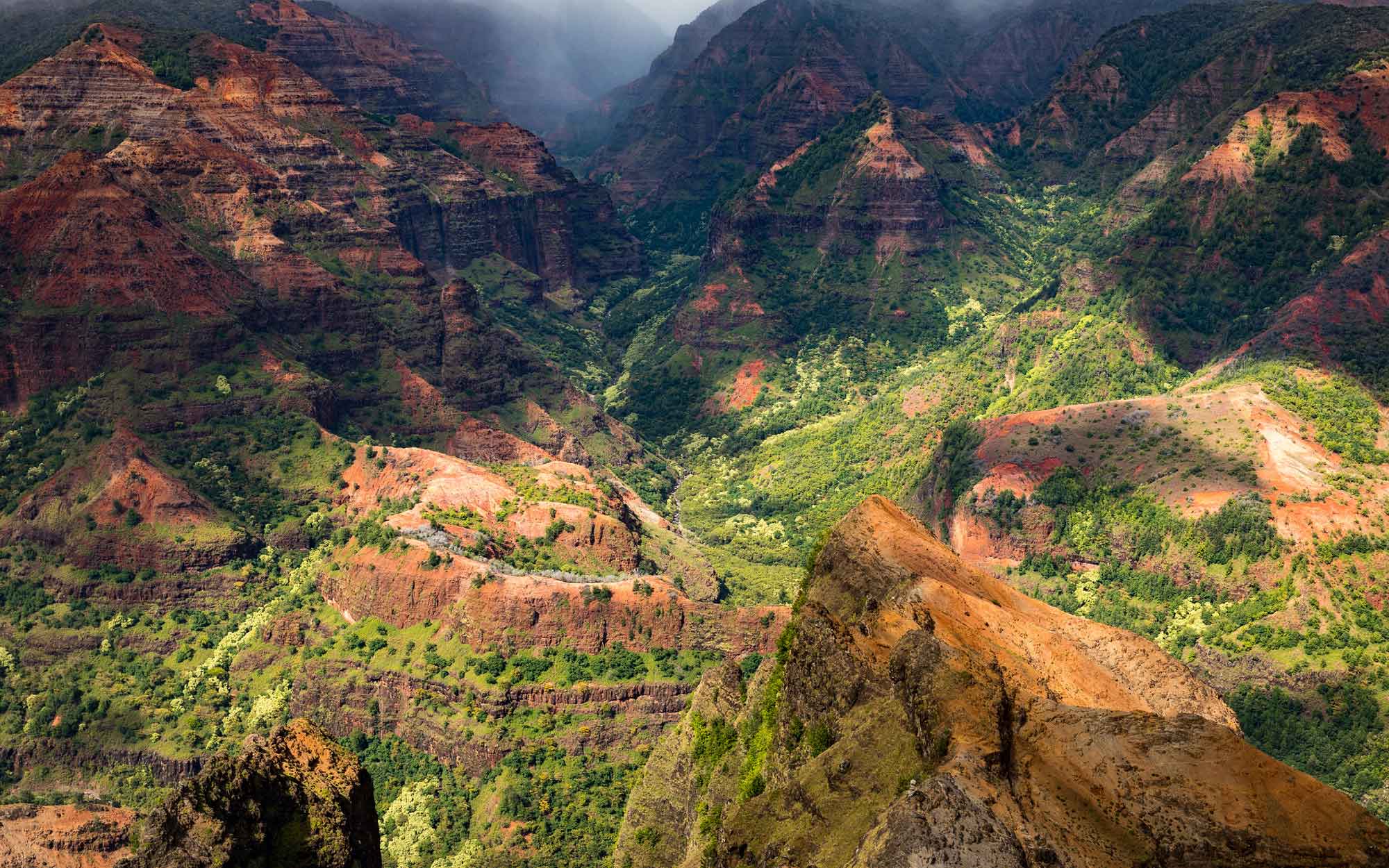 A similar fault dropped the east side of the island down relative to the west, creating the low-elevation plain of east Kaua‘i.

The sequence of constructive volcanism accompanied by erosion and catastrophic landslides is overlain by the addition of late-stage eruptions. These eruptions add topographic highs to the eroded flanks of older volcanoes and can create distinctive hills or pu‘u. Cinder and littoral cones form some of the most iconic landscapes of Hawai‘i—such as Diamond Head on O‘ahu and the Haleakalā summit area on Maui. 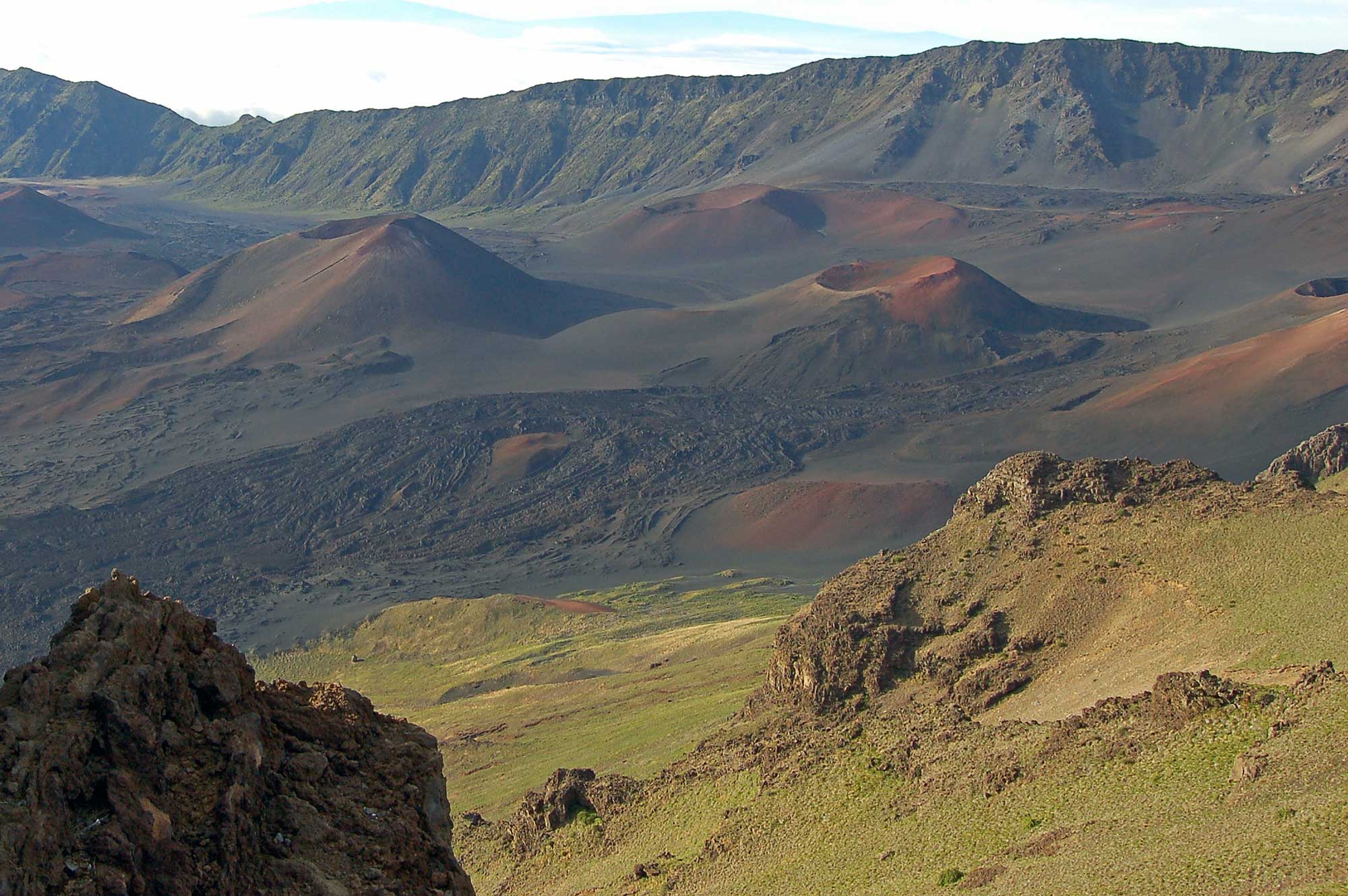 Haleakalā, Maui. The summit “crater” of Haleakalā formed by erosional—not volcanic—processes. Two headward-eroding valleys were carved into the sides of the volcano and were later covered by the younger cinder cones seen today. Photograph by Kent Buckingham (Flickr; Creative Commons Attribution-NonCommercial 2.0 Generic license).

Where active volcanoes touch the sea, large volumes of lava travel through lava tube systems into the ocean. The lava reacts explosively with the seawater, creating a steam-driven eruption that can throw blocks of hot rock a hundred meters (330 feet) into the air and generate large quantities of glassy ash.

Input your text here! The text element is intended for longform copy that could potentially include multiple paragraphs.

The debris can readily build up into littoral cones, dozens of which formed in this way on the coastal stretches of the younger islands. Littoral cones are subject to vigorous wave erosion, which often cuts into the cone to form a protected bay. 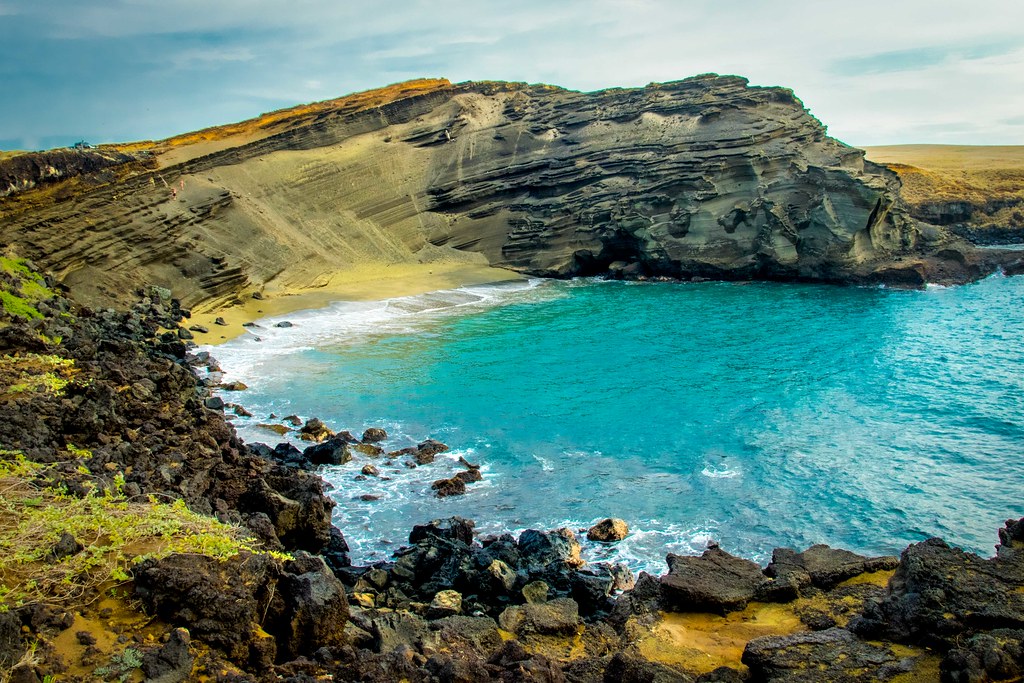 Cinder cones erupt during all subaerial phases of volcanism; however, those formed during earlier shield building are generally covered by later eruptions.

Cinder cones that form during the post-shield stage of volcanism, as well as in the later post-erosional stage, are prominent landscape features. Volcanic rift zones are often marked by linear arrays of cinder cones. Post-erosional eruptions sometimes take place in shallow water where the mix of water and magma adds to the explosive nature of these events. Diamond Head on O‘ahu is an example of how lava-seawater interactions can build a substantial edifice composed of layered cinders and volcanic ash that also contains blocks of basalt and coral fragmented by steam explosions. Another example on O‘ahu is at Haunama Bay, where the cone was later breached by wave erosion and subsequently came to support a protected reef ecosystem. 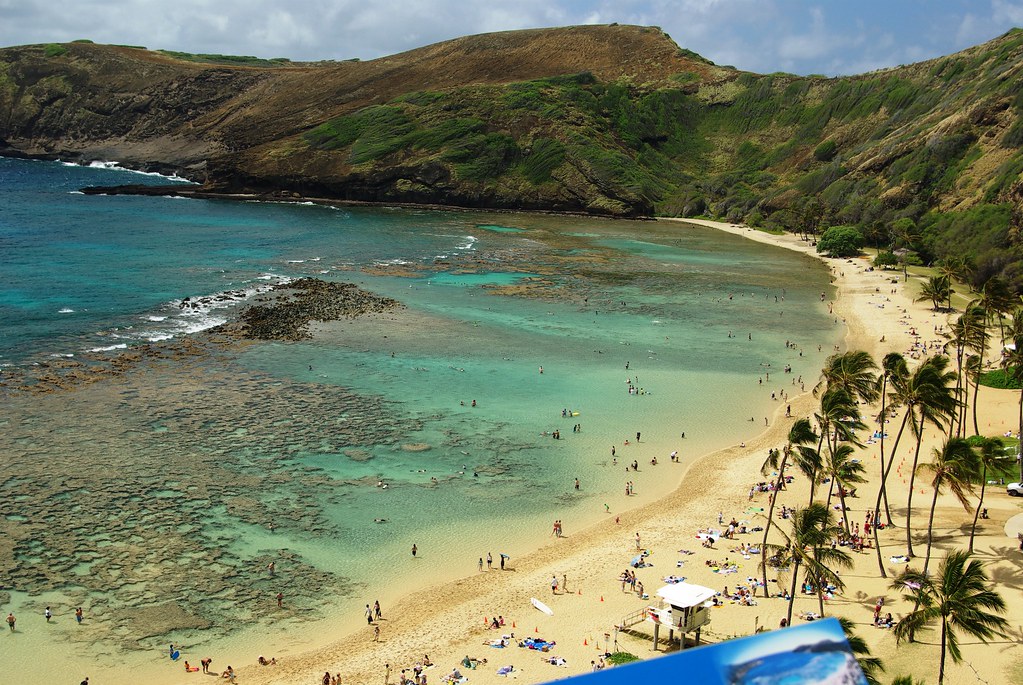