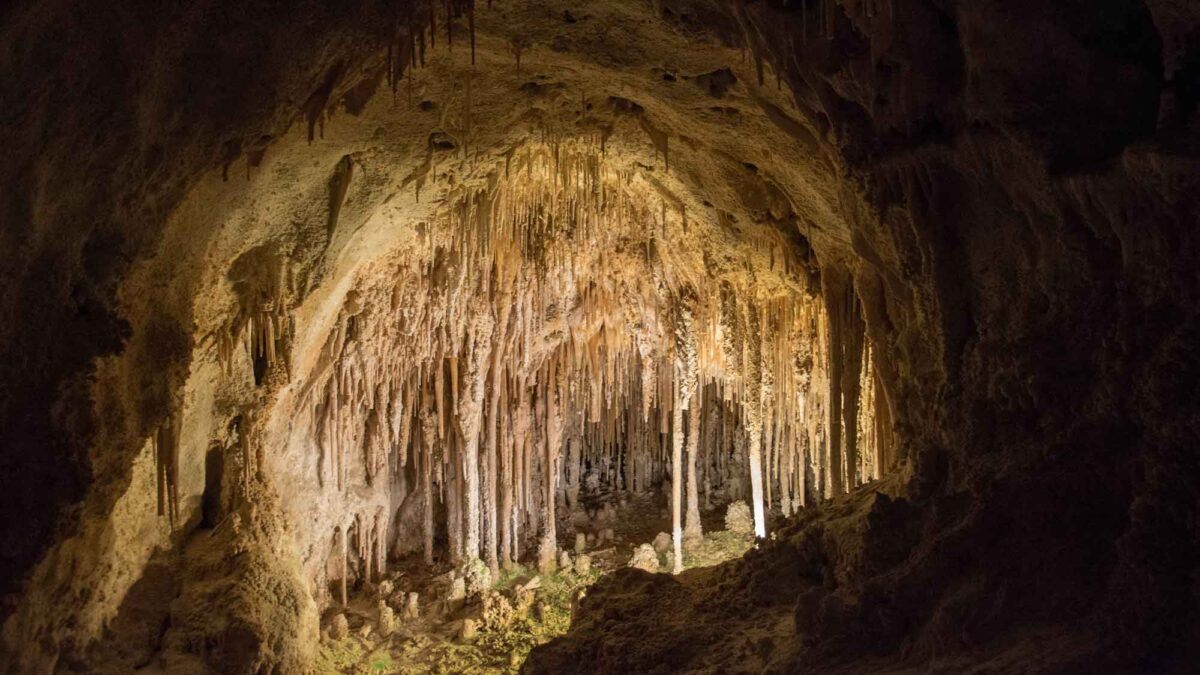 Snapshot: Overview of the topography of the Great Plains region of the southwestern United States. 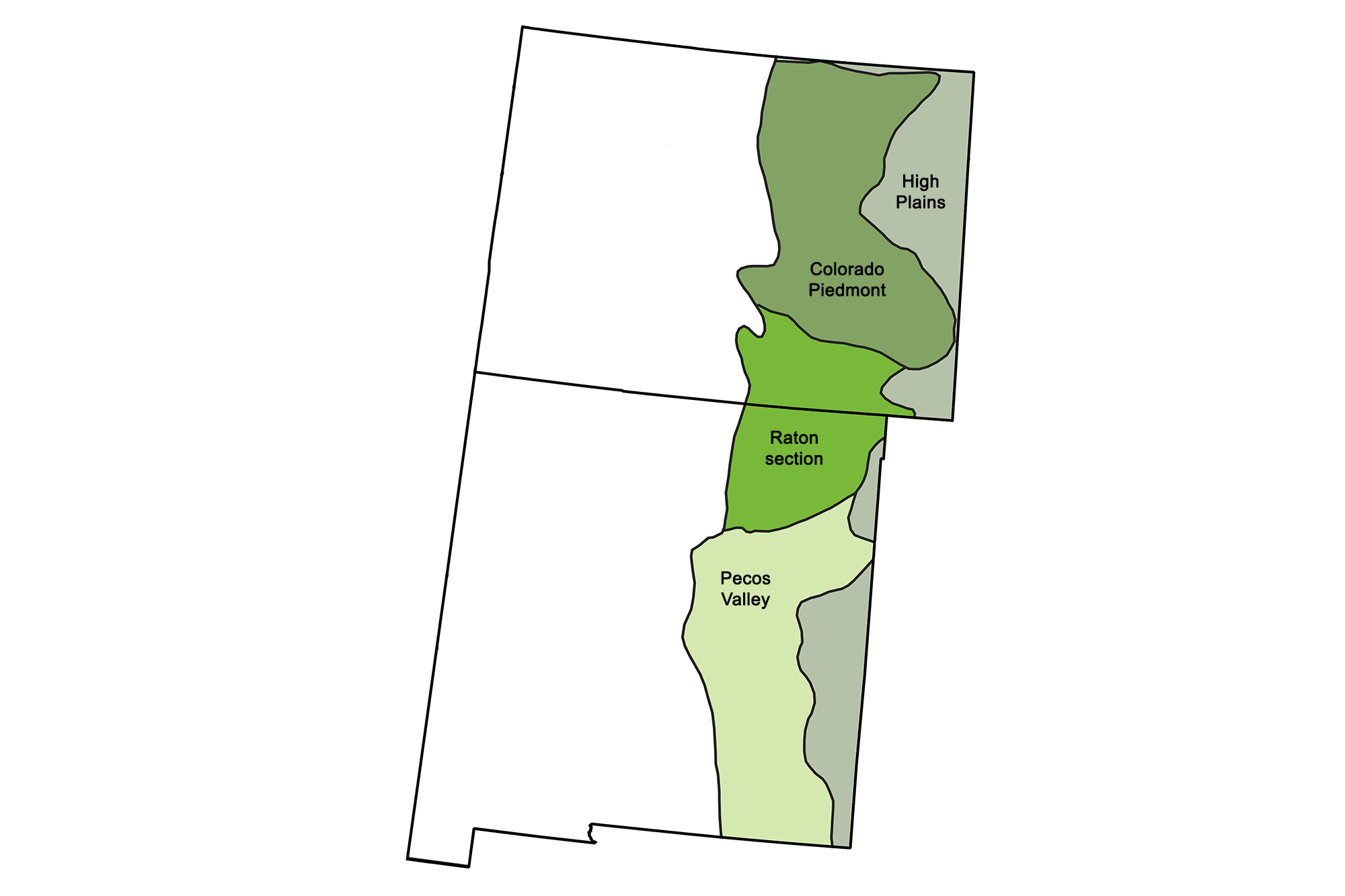 The Great Plains is a lowland area underlain by flat-lying sedimentary rocks, and it extends in a north-south band across the entire United States from Montana and North Dakota to Texas and New Mexico. In the Southwest, the Great Plains lie along the eastern margins of Colorado and New Mexico.

The region has a basement of flat-lying Precambrian metamorphic and igneous rocks, overlain by Paleozoic and Mesozoic sedimentary rocks. The Mesozoic sediments consist largely of materials eroded from the Rocky Mountains and deposited in the Western Interior Seaway, which covered this area during the Cretaceous. The Laramide uplift that affected the Colorado Plateau and Rocky Mountains also raised the western Great Plains, but did not significantly buckle or disturb the sedimentary layers. For this reason, the Great Plains region is not entirely flat, but changes in elevation from 1830 meters (6000 feet) on its western edge to 460 meters (1500 feet) on its eastern edge. During much of the Cenozoic, the Great Plains’ gentle eastward slope has received sediments deposited by streams issuing from the western highlands. The top of that sequence of continental strata is the Ogallala Formation, deposited between 15 and 5 million years ago in the Miocene. This formation houses the famous Ogallala (or High Plains) Aquifer, which supplies water for most of the Great Plains.

There are deep sedimentary basins in the Great Plains, which have subsided throughout most of the Phanerozoic while at the same time collecting thick layers of sediment. The Denver Basin covers northeastern and eastern Colorado, into Wyoming, Nebraska, and Kansas. The Raton Basin spans southeastern Colorado and northeastern New Mexico, and the Permian Basin is located in southeastern New Mexico and into west Texas. Multiple strata in these sedimentary basins are important for oil and gas, and certain sandstones contain uranium deposits.

The Colorado Piedmont, which runs along the foothills of the Front Range in the Rocky Mountains, is a broad hilly valley that serves as the locus of Colorado’s urban and agricultural activity. The area hosts the South Platte and Arkansas rivers and their tributaries, which have cut deeply into the Paleogene sediments deposited after the uplift of the Rocky Mountains. A less eroded segment between the river valleys is located east of Pikes Peak. Here, the middle Cenozoic Castle Rock Conglomerate is preserved in many locations, forming the resistant, protective cap seen on mesas and buttes. Along the eastern edge of the Rockies, older limestones and sandstones upturned during the Laramide Orogeny form a series of hogback ridges and flatirons (steeply sloping triangular landforms) that run parallel to the great mountain chain. 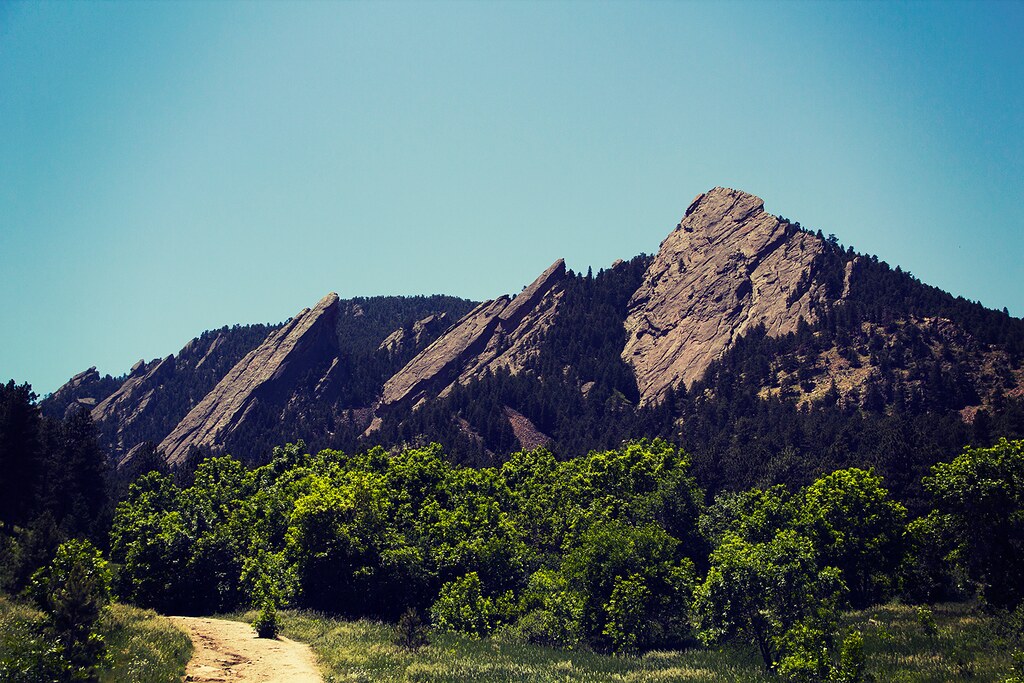 South of the Colorado Piedmont, the Raton section comprises a less eroded, higher segment between the Arkansas and Canadian Rivers. The area borders the southern end of the Rockies and exhibits interesting erosional and igneous topography.

The Park Plateau is formed from the surface outcrop of the Raton Formation, deposited from material eroded off the Sangre de Cristo Range during Laramide mountain building. The area covered by the formation straddles the divide between the Arkansas and Canadian Rivers and the border between Colorado and New Mexico. The tributaries of the two rivers have eroded the landscape in an intricate dendritic pattern, forming a finely dissected hilly area with a relief of approximately 100 meters (330 feet) between hills and valleys. The formation is also of great interest because it includes an iridium-rich clay unit that marks the great meteor impact at the Cretaceous-Cenozoic boundary. The Spanish Peaks, a 27- to 14-million-year-old intrusion, are located in southcentral Colorado just east of the Sangre de Cristo Range at the northern edge of the Raton Formation. These eroded igneous plutons lie at the border between the Great Plains and Rocky Mountains, forming two large, high peaks with elevations of 4153 meters (13,626 feet) and 3866 meters (12,683 feet). A set of radial dikes extends out from the main body of rock, along with various shapes and sizes of intruding igneous rocks. The dikes range from 1 meter (3 feet) to 30 meters (100 feet) wide, and are kilometers (miles) long.

On the eastern edge of the Park Plateau are topographic expressions of late Cenozoic volcanic flows and eruptions. The Raton-Clayton Volcanic Field is located within a southwest-northeast trending zone, termed the Jemez Lineament, that stretches from the Basin and Range across the Rio Grande Rift and into the Great Plains. The age of volcanism in the area ranges from Capulin Mountain, a cinder cone that erupted nearly 60,000 years ago, to eruptions and lava flows that occurred between eight and two million years ago. 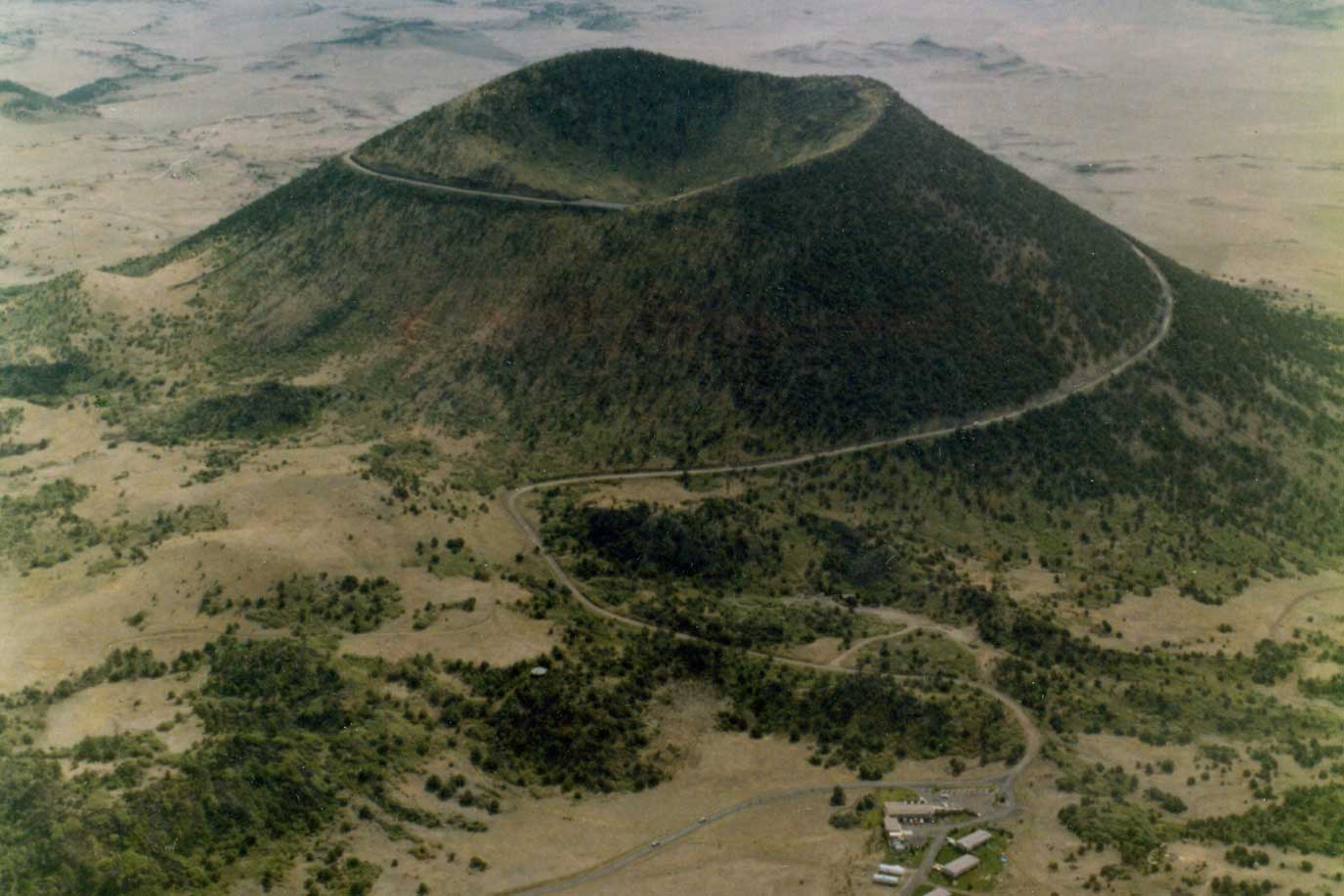 Quaternary basaltic flows can be found farther east, extending almost to the borders of Oklahoma and Texas. In some cases where the flows filled older streambeds, subsequent erosion preserved the flow while removing the surrounding strata to produce what is termed a "topographic inversion."

A topographic inversion is a landscape with feature that have reversed their elevation relative to other features, most often occurring when low areas become filled with lava or sediment that hardens into material that is more resistant to erosion than the material that surrounds it. Typically, synclines (U-shaped folds) form valleys and anticlines (A-shaped folds) form ridges. However, the reverse can also be true. In a phenomenon called topographic inversion, topographic lows (valleys) may form from the structural high (top of an anticline)—the term "structure" refers to the form of the rock layers. At the top of the anticline, a layer may erode away because of cracks caused by bending of the rock at the top of the fold. Fracturing at the top of the fold allows increased water penetration, and topographic highs are subjected to more severe weather. Once exposed, the less resistant layers below the eroded top quickly weather away to form a valley. The limbs of the resistant layer, however, are generally still intact. This leaves two ridges of resistant rock on either side of a valley floored by softer, less resistant layers.

Comparison of different erosional patterns of a normal fold versus a topographic inversion. Images by Jim Houghton; modified for the [email protected] project.

The Raton section also includes landforms related to the submergence of the Great Plains by the Western Interior Seaway during the Cretaceous. Methane seeps are vents on the seafloor through which hydrocarbons emanate, producing cements that lithify the surrounding rocks and are thus elevated above the surrounding seafloor. Seeps of this type formed just west of Boone, Colorado during the late Cretaceous, approximately 79 to 69 million years ago. They are referred to as the Tepee Buttes, and they form a linear belt extending in a northeast-southwest direction. The buttes are approximately 10 meters (30 feet) high and are composed of well-cemented fossiliferous limestone surrounded by Cretaceous gray shales of the Pierre Formation.

The High Plains is an area of flat relief that reflects 500 million years of cratonic stability in the continent’s interior. Much of this area was submerged by the Cretaceous Western Interior Seaway, leading to the deposition of sediment eroded from the mountains to the west. As such, the Ogallala Formation—a series of porous Miocene strata—defines the extent of the High Plains. The western limits of the Ogallala Formation are located 80 to 240 kilometers (50 to 150 miles) east of the Rocky Mountains because approximately five million years ago, rivers flowing eastwards from the mountains began to erode rather than deposit material in the Great Plains. This drastic change removed the Ogallala and much of the region’s older Cenozoic strata in swaths around major east-flowing streams—the North Platte, South Platte, Arkansas, and Canadian rivers. From the rim of the High Plains, the Ogallala caprock dips eastward to form the Llano Estacado or Staked Plains of Texas and New Mexico—a large area of dry, treeless, nearly flat, high prairie. 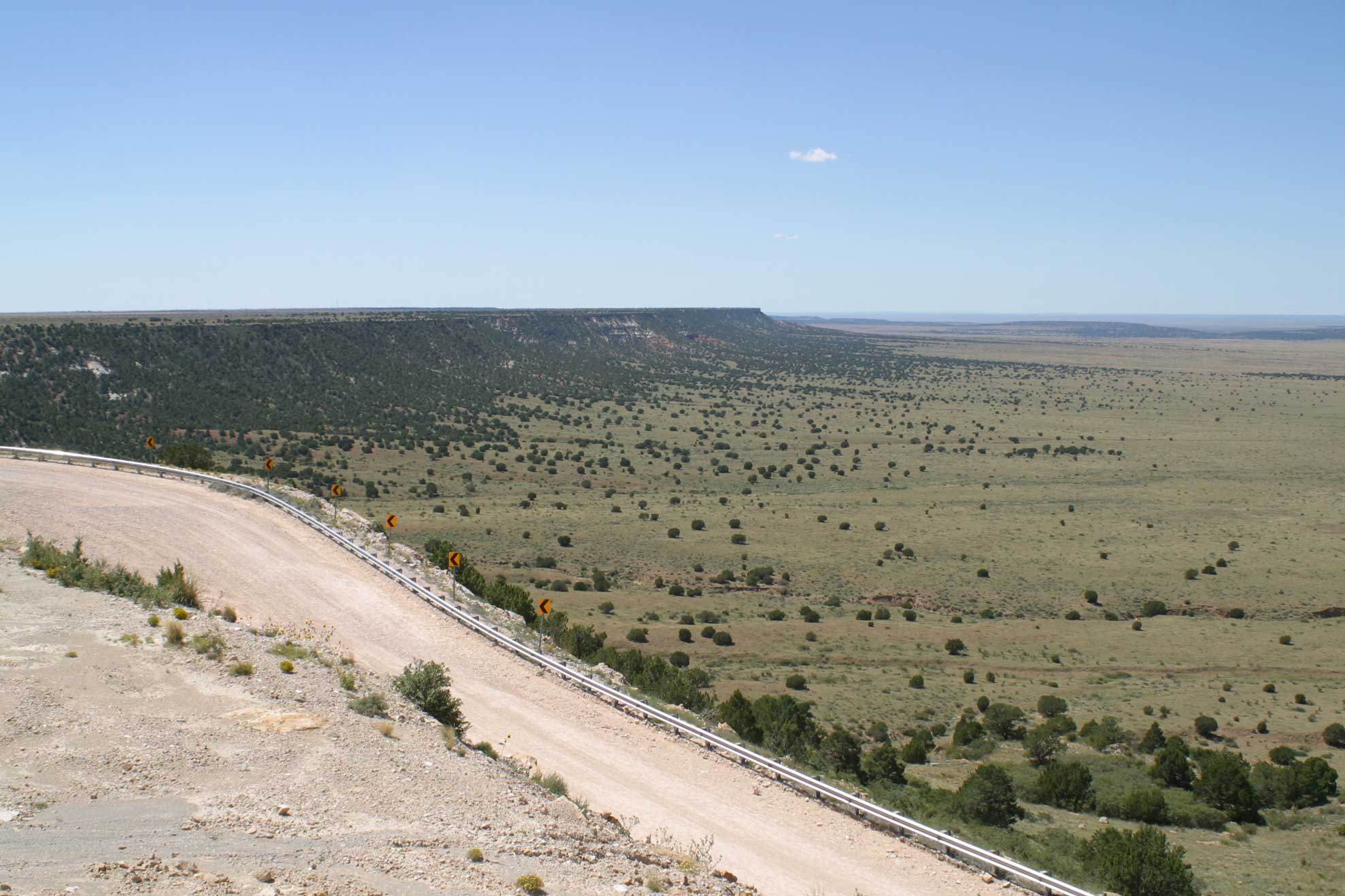 Southwest view of the escarpment that gives rise to the Llano Estacado in New Mexico (Alamogordo Valley to the right). Image by "Leaflet" (Wikimedia Commons; Creative Commons Attribution-ShareAlike 3.0 Unported license).

The Pecos Valley is a broad valley formed by erosion driven by the Pecos River, a tributary of the Rio Grande, which drains the area. The valley follows the river from the Sangre de Cristo Mountains of New Mexico southward through the Edwards Plateau to join the Rio Grande River in Texas. The Pecos Valley is relatively flat, and is distinguished by the Ogallala Formation on its eastern side, where it forms a rim rock at the top of the Mescalero escarpment.

At the northern end of the Pecos Valley lies another field of late Cenozoic basalt flows, the Ocate Volcanic Field, which is also a part of the Jemez Lineament. The mesa-capping flows in this field have been dated and reveal a pattern of ages similar to those of the Raton-Clayton Volcanic Field. Flows at higher elevations are older than those found at lower elevations. This pattern can be explained by progressive erosion that lowered the elevation of the sedimentary strata upon which younger flows were deposited.

There is an extensive amount of karst topography throughout the Pecos Valley, leading to the formation of some of New Mexico’s most spectacular caves (including Carlsbad Caverns, Fort Stanton Cave, Torgac Cave, and Lechuguilla Cave). 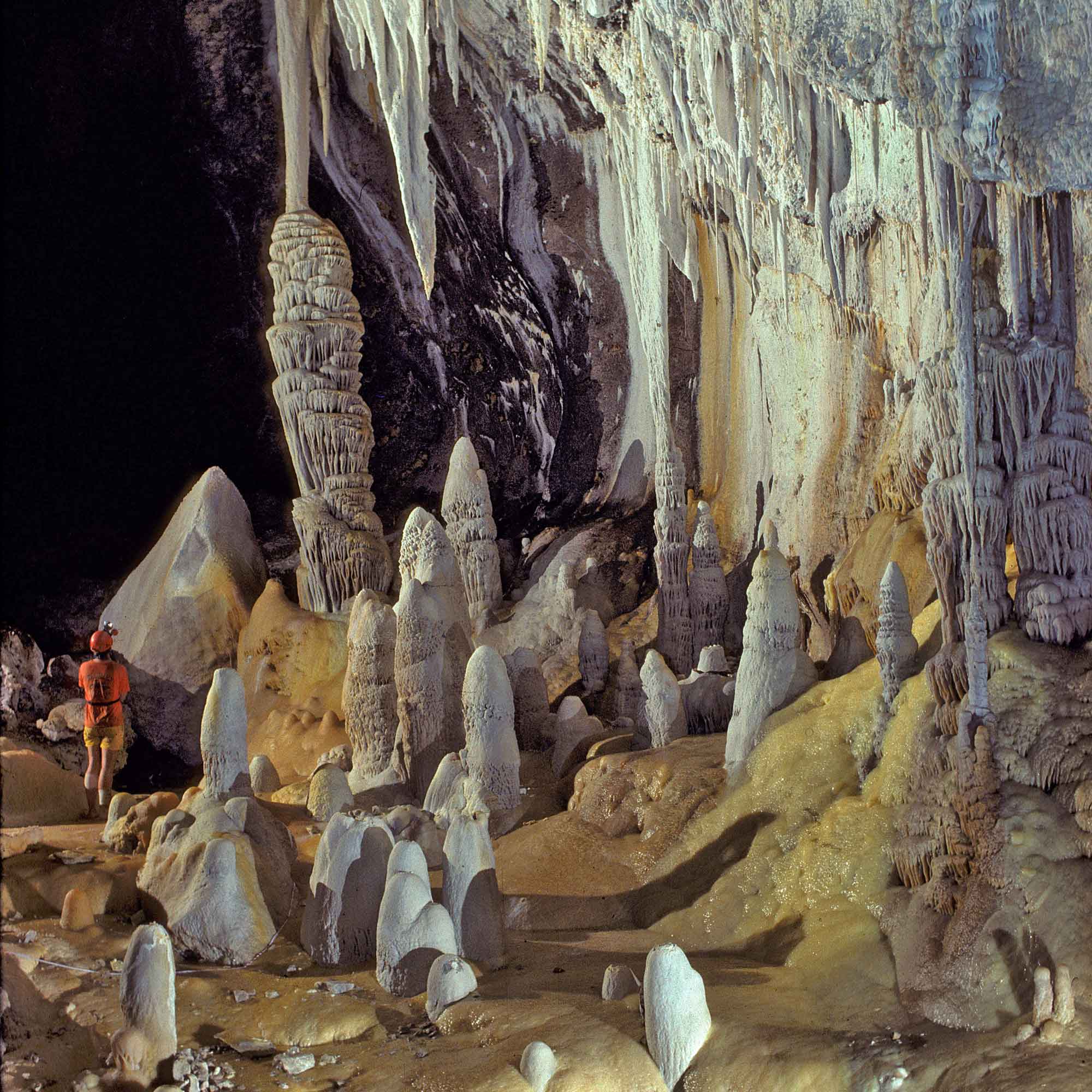 Karst topography refers to a region where the landscape’s features are largely the result of chemical weathering by water, resulting in caves, sinkholes, disappearing and reappearing streams, cliffs, and steep-sided hills called towers. These structures typically form when water picks up carbon dioxide from the atmosphere and ground to form carbonic acid. Even this fairly weak and dilute acid dissolves carbonate rocks (such as limestone) relatively easily, resulting in dramatic features while other rock is comparatively unaffected. Karst is found in every state except Hawai‘i, and as an aquifer it is the source of a significant amount of our drinking water.

While common, karst is not always easily identifiable since it is often not expressed at the surface or its topography has been affected by other factors. Karst topography is a relatively mature type of landscape, taking many tens of thousands of years to develop, and it can indicate that a region has been free of other forms of erosion or deposition for an extended period. Karst topography in the Southwest is present wherever water has eroded the limestone bedrock, especially in the southern Great Plains and around the Grand Canyon. In addition, some karst in the Southwest is generated by the action of sulfuric acid. 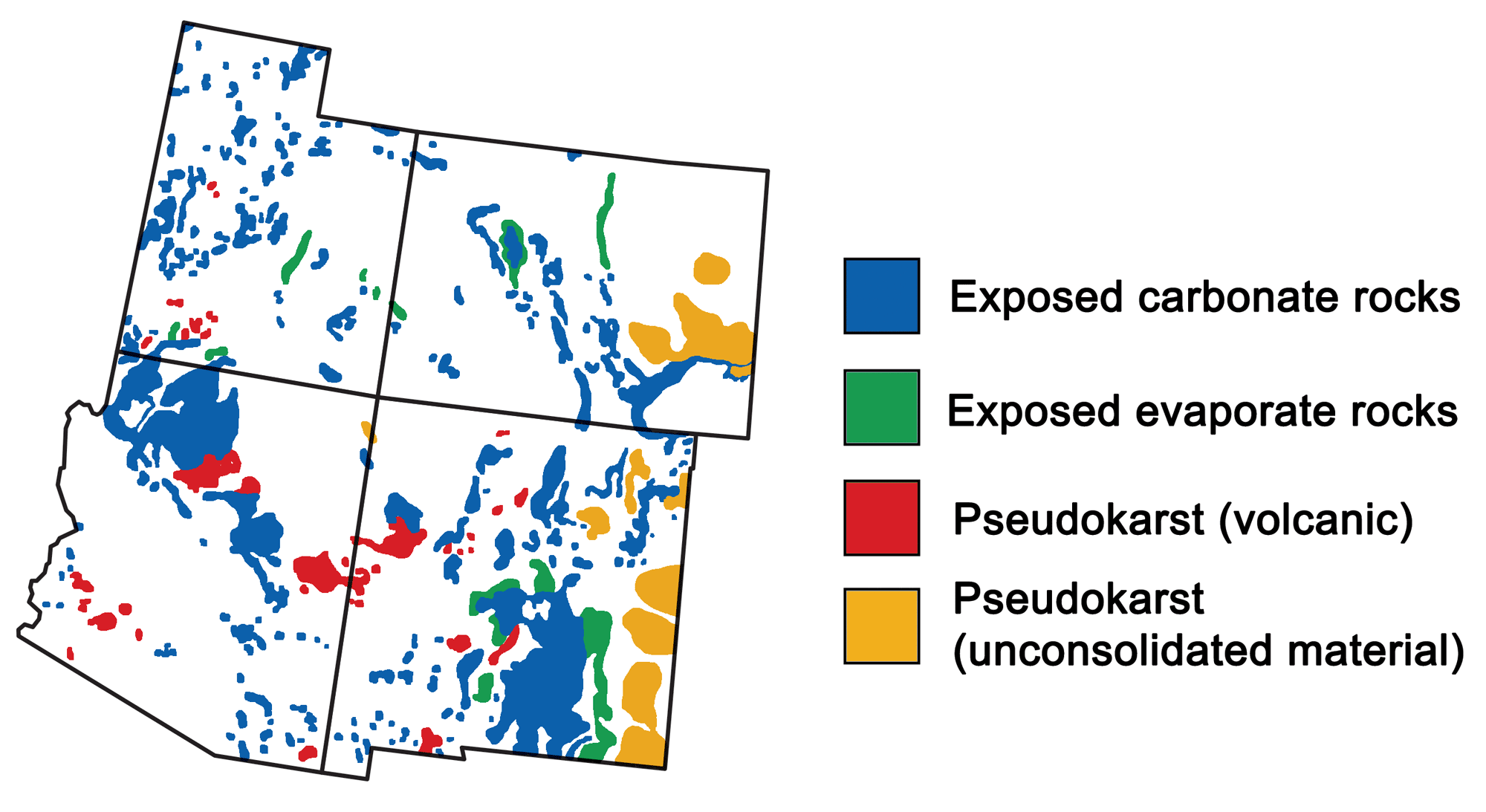 Locations of karst in the southwestern United States. Image by Wade Greenberg-Brand (and updated for [email protected] project), adapted from image by USGS.

Though most karst is formed when weak carbonic acid in rain or groundwater dissolves the sedimentary bedrock, New Mexico’s caverns have been shaped through a unique process called sulfuric acid dissolution. In this process, deep sources of hydrogen sulfide—usually derived from gas and oil reservoirs—interact with ground or rainwater to form sulfuric acid, a strong acid that is able to aggressively dissolve large cave passages out of the limestone.