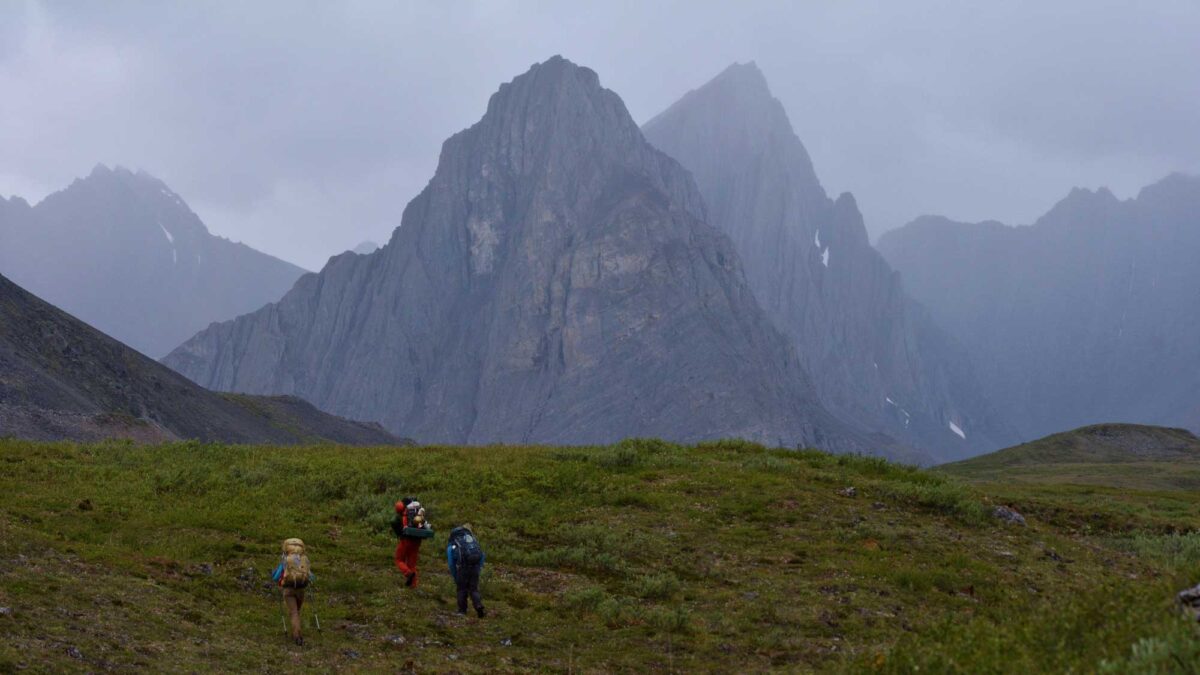 Snapshot: Overview of the topography of Alaska. 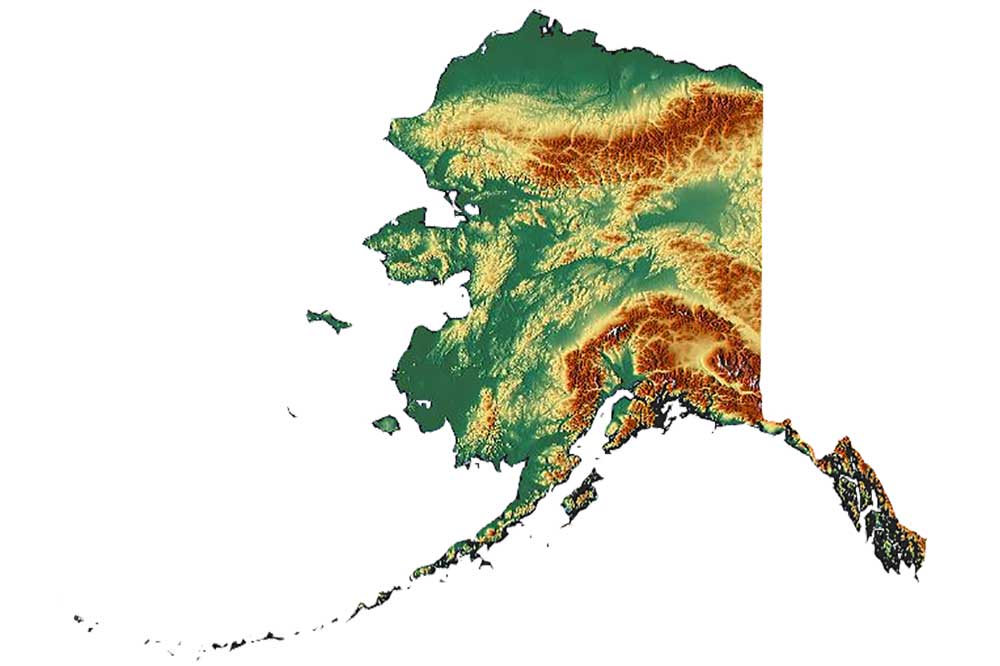 Alaska is one of the most mountainous states in the US, and, along with California, has the highest relief. Denali, formerly known as Mt. McKinley, at 6194 meters (20,322 feet), is commonly accessed by climbers and other tourists from the nearby town of Talkeetna (elevation 106 meters [348 feet]). 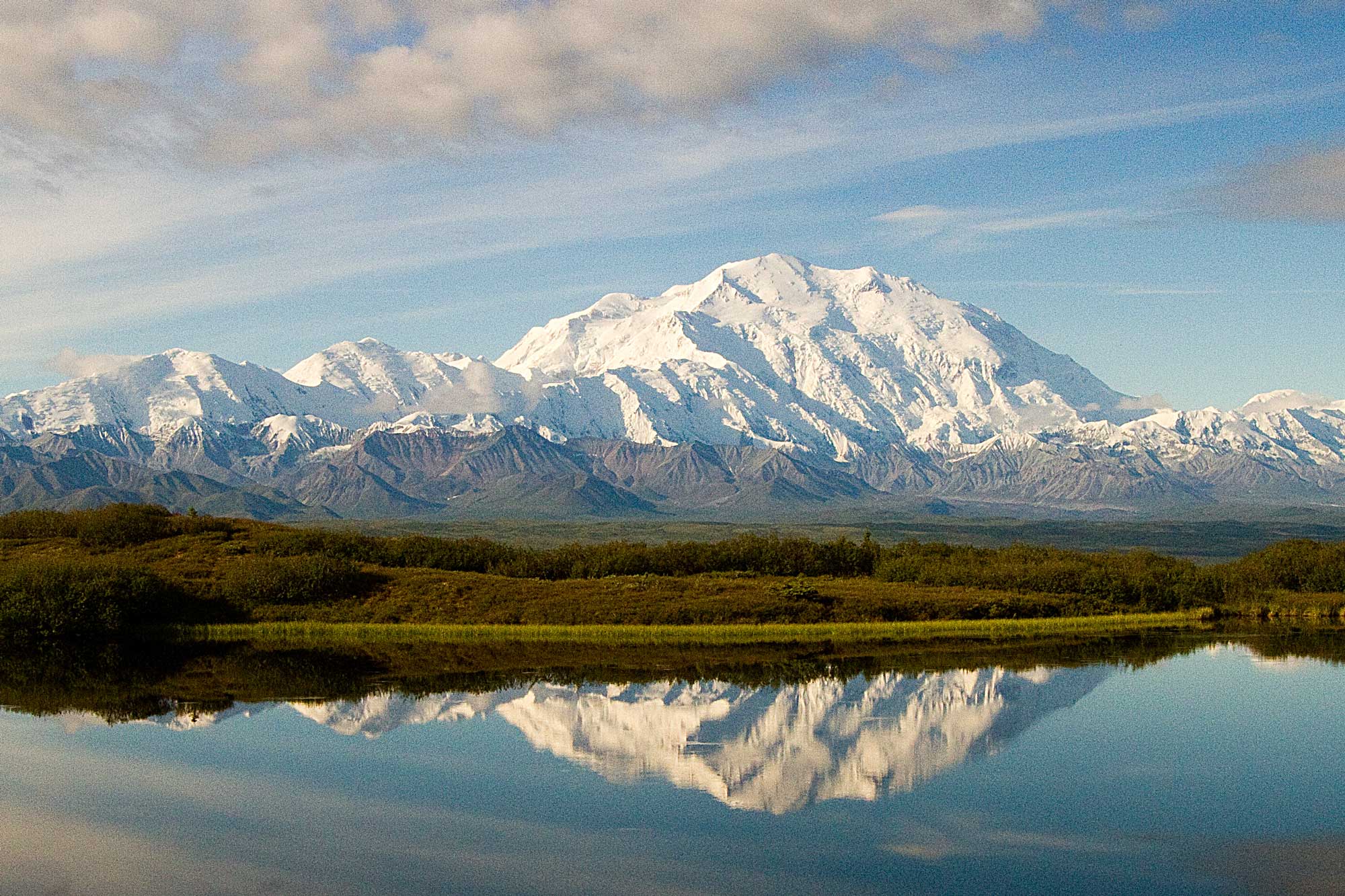 This represents a difference of more than 6000 meters (almost 20,000 feet) within less than 96 kilometers (60 miles). There are, however, two non-mountainous areas of Alaska as well—the North Slope and the Interior. Much of Alaska’s topography can be explained by its odd origins: continental Alaska is made up almost entirely of accreted terranes—bits and pieces of microcontinents and island arcs that collided together over geologic time. 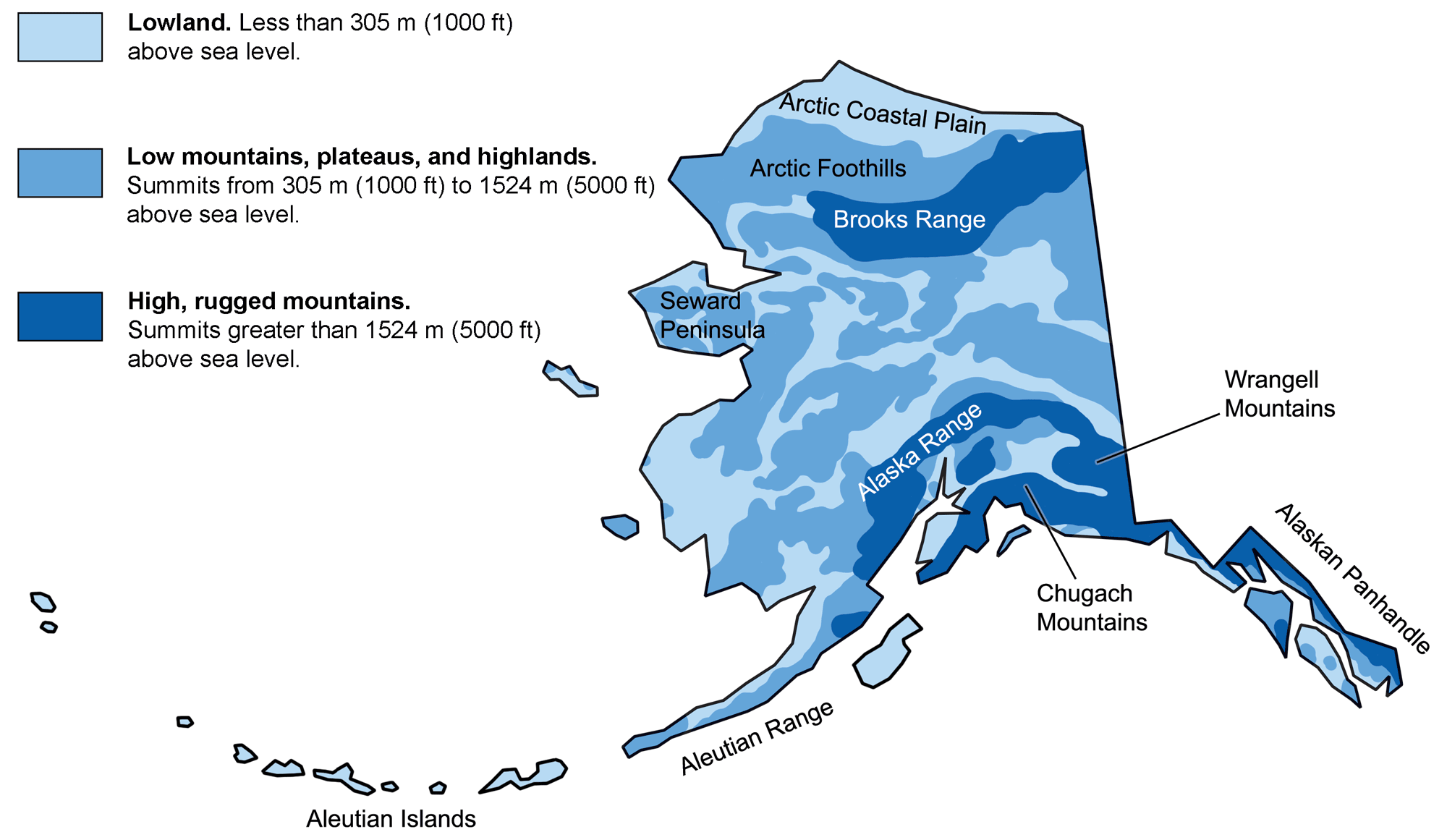 Physiographic features of Alaska. Image adapted from original by the USGS (public domain).

The Yukon-Tanana terrane was responsible for the formation of the North Slope and Brooks Range when it collided with a part of Arctic Canada that rifted away, rotating counterclockwise into its present position. The forward edge of the Yukon-Tanana’s ancient seabed was uplifted, forming the Brooks Range, while the trailing edge subsided. The rising Brooks Range shed copious amounts of sediment northward toward the Arctic Ocean, and the combination of subsidence and accumulation of sediment formed the coastal plain we call the North Slope. The Brooks Range is highest in the east because it consists mainly of thrust sheets: giant slabs of rock that were piled on top of each other due to compressional forces acting on the rotating crust. 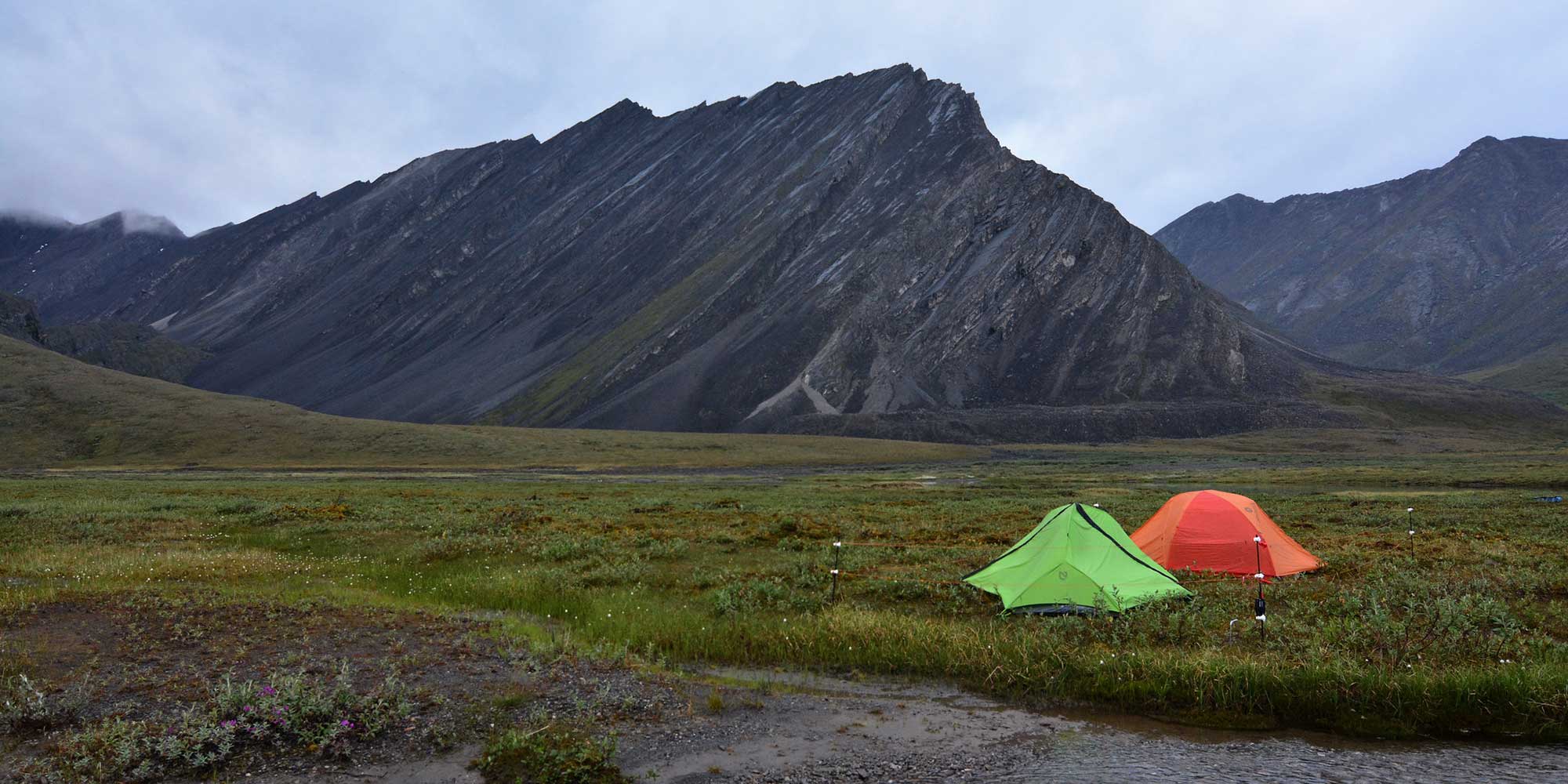 The Seward Peninsula extends from northwest Alaska and is a remnant of the Bering land bridge that connected Alaska to Siberia during the Pleistocene. The Seward Peninsula is actually composed of two terranes: the Seward terrane, which contains predominantly metamorphic rock, and the York terrane, made up of sedimentary rocks that were originally deposited in a shallow marine environment before their accretion onto the North American plate. These sedimentary rocks were deformed by thrust faulting during the Cretaceous. Although Alaska was never buried under an ice sheet, as were much of Canada and the northern continental U.S., glaciation was extensive in the Brooks Range during the ice ages. The effects of these glaciers can be seen in the range’s sharp peaks and U-shaped valleys.

The Interior is an expanse of flat, swampy areas and low, rolling hills. The geological origin of this area is murky because so little of its bedrock is exposed, but we do know it contains fragments of what was once ocean floor. Such rocks can be very vulnerable to erosion because the minerals they contain are more easily weathered. The area’s low topography probably results from a combination of easily weathered rocks and an incomplete collision between the Brooks Range and terranes south of the Interior. The basin has also been filled with copious amounts of sediment from the Brooks Range, Alaska Range, and the Yukon River.

Southern Alaska comprises numerous terranes that have been added to North America since the Late Triassic (about 230 million years ago). In addition to colliding with one another, the terranes were progressively pulled apart by major faults that formed due to changing plate motions between North America and the Pacific plate.

The Wrangell-St. Elias Mountains are mostly composed of a large terrane called Wrangellia, which collided with North America in the Cretaceous and has also been cut by large faults.

This terrane makes up most of the Coast Range in southeastern Alaska, parts of the Alaska Range, and part of the Alaska Peninsula. It is still being rearranged, as witnessed by the frequent, large earthquakes along the Denali Fault system.

Some terranes have an extremely complex geology, and geologists have lumped them into composites made up of pieces with similar tectonic histories. The Mertie Mountains east of Fairbanks are included in the Yukon composite terrane, which was in place by the Late Jurassic. The Kuskokwim Mountains in southwestern Alaska include pieces of several composite terranes that were not assembled until much later, in the Paleogene. The Alaska Range, which includes Mt. McKinley, also comprises at least two terranes that were brought together by the Denali Fault system during the Late Cretaceous. The addition and movement of the Southern Margin composite terrane built the Fairweather, Chugach, and Kenai mountains; these ranges are part of an accretionary prism. 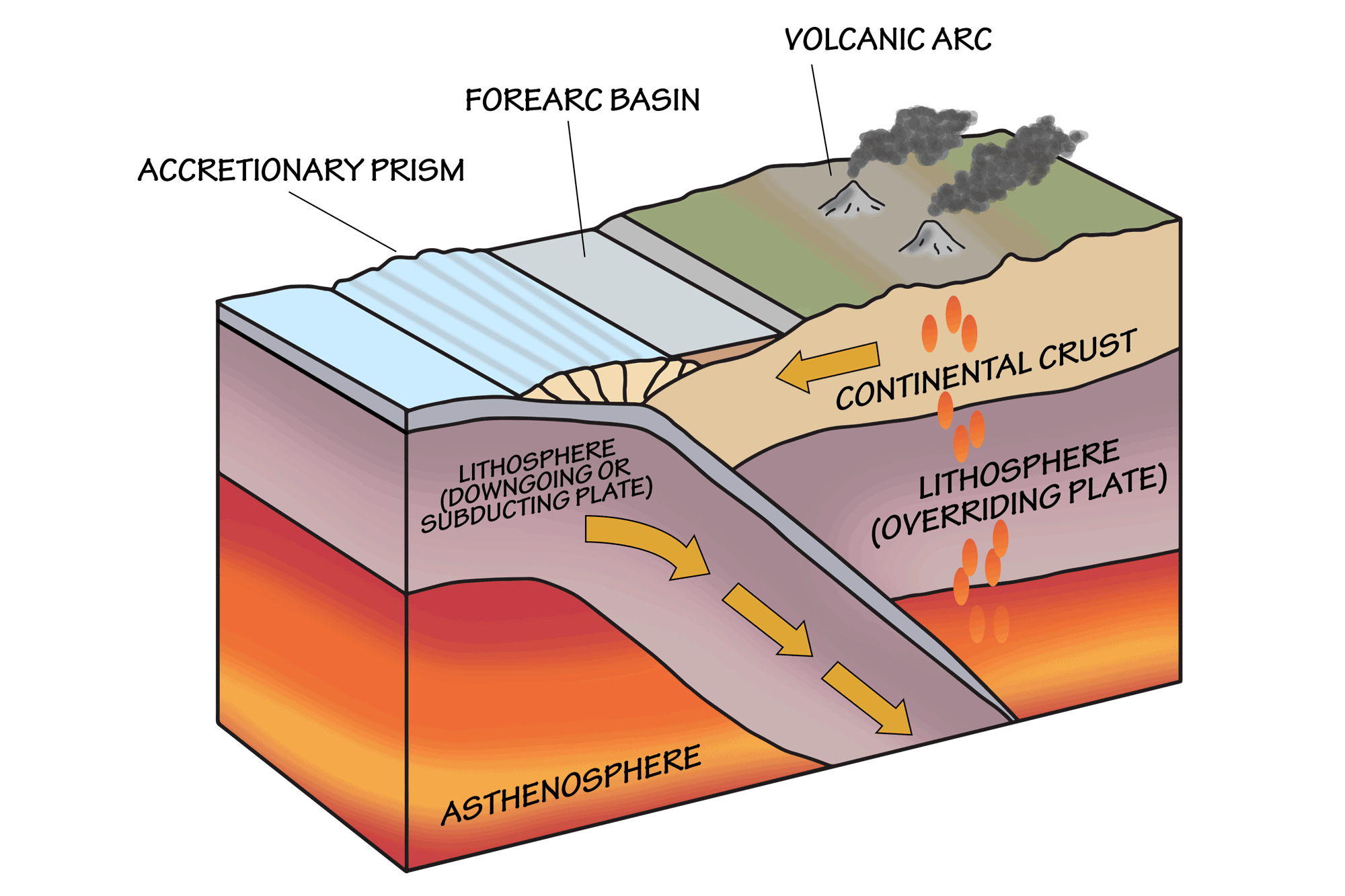 Some of the features associated with subduction zones. Image by Wade Greenberg-Brand, modified for the [email protected] project.

Subduction is still occurring along the Aleutian Trench, resulting in the formation of the Aleutian Islands. The subduction creates stratovolcanoes and plutonic igneous intrusions along the entire Aleutian Range, where some of the highest mountains are young volcanoes that erupt periodically. 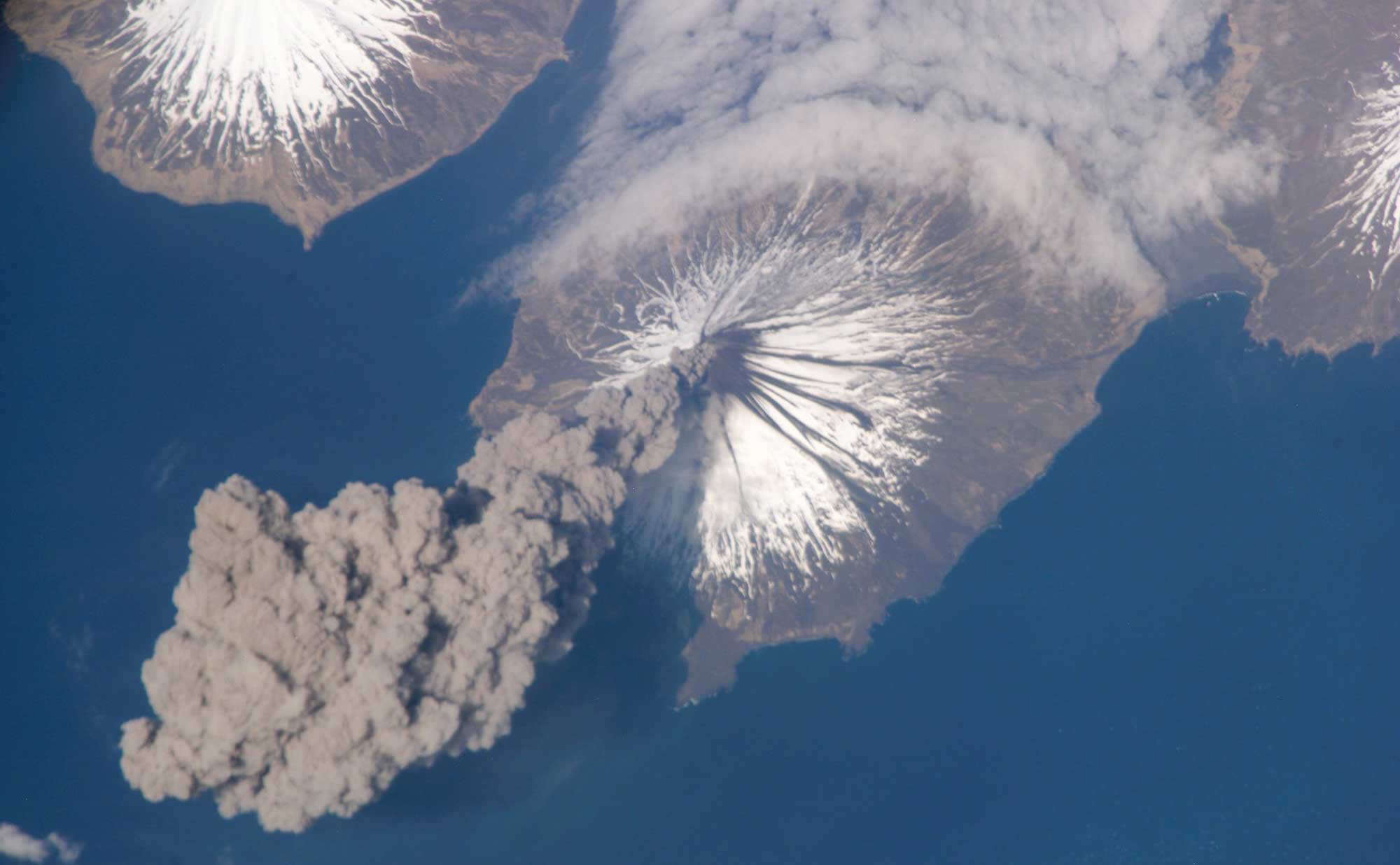 Satellite photograph of the eruption of Cleveland Volcano in the Aleutian Islands of Alaska. Image by NASA (Flickr; Creative Commons Attribution-NonCommercial 2.0 Generic license).