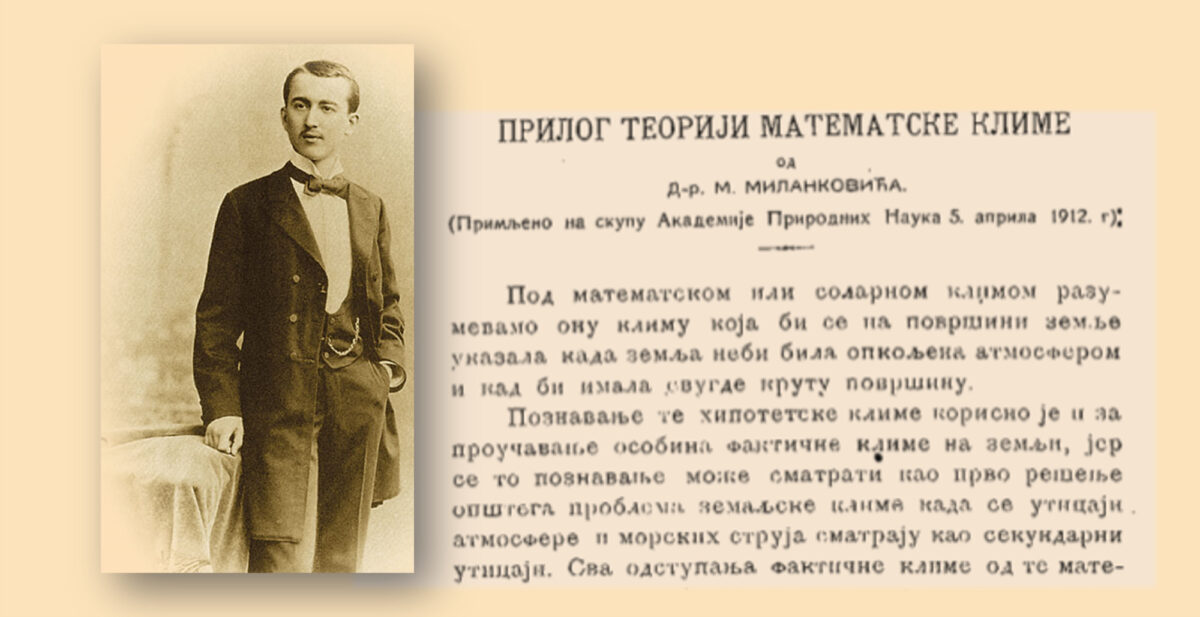 Changes in the Earth’s orbit around the sun and changes in the tilt and wobble of the Earth’s axis can lead to cooling or warming of the Earth’s climate because they change the amount of energy our planet receives from the sun. These changes, known as Milankovitch cycles, cause climate changes on time scales of thousands of years.  They are not responsible for the rapid warming the Earth has experienced over the last 100 years.

Image above: Photo of Milutin Milankovitch, unknown author, via Wikimedia Commons. Photo of front page from Milankovitch's paper "Contribution to the Mathematical Theory of Climate," via Wikipedia.

Nearly all of Earth’s atmospheric energy is ultimately derived from the sun, so it makes sense that the planet’s position and orientation relative to the sun would have an effect on climate.

The shape of the Earth’s orbit around the sun is not constant, and neither are the tilt of the Earth’s axis and the direction of the axis relative to fixed stars in the galaxy; see Figures 1-3 below.

Figure 1. Eccentricity, caused by gravitational forces from other planets in our solar system, changes the shape of the orbit on a 100,000-year cycle from a circular to a more elliptical shape. Animation by NASA/JPL-Caltech (public domain).

Figure 2. Obliquity is the change of the angle of Earth’s axis, which ranges from 22° to 24.5° from normal, and occurs on a 41,000-year cycle. Animation by NASA/JPL-Caltech (public domain).

Figure 3. Precession, commonly called the “wobble” of Earth’s axis, affects the positions in Earth’s orbit at which the Northern and Southern Hemispheres experience summer and winter. Precession changes on an approximately 26,000-year cycle. Animation by NASA/JPL-Caltech (public domain).

These orbital and astronomical changes repeat on time scales ranging from 26,000 to 100,000 years, and one can calculate their effect on the amount of energy our planet receives from the sun. A scientist named Milutin Milankovitch worked out the theory behind these cycles in the early 20th century, and they are named Milankovitch Cycles after him.

Figure 4 shows the combined effect of all three cycles on the solar radiation reaching the Earth, from 800,000 years ago to today.

The effect of this changing solar input over time has been significant: it has pushed the Earth’s climate in and out of cold and warm phases. Figure 5 shows the Milankovitch cycles together with Antarctic temperature reconstructions from ice core records. Scientists think that the Milankovitch cycles were enough to push the climate from, say, a cold phase into the beginning of a warm phase, but they are not enough to explain the full amount of temperature warming.  But once the Earth started to warm, ice cover over the oceans started to melt, and the ocean’s waters warmed.  Warming was then amplified by changes in the physics, chemistry, and biology of the ocean that affected the exchange of carbon dioxide between the ocean and the atmosphere. More carbon dioxide in the atmosphere then led to more warming, until the Milankovitch cycles pushed the climate back toward a cooling phase.

Milankovitch cycles are not the cause of the warming that the Earth is experiencing today. Figure 4 shows that most recently—in the last 10,000 years—Milankovitch cycles have been in a phase of decreasing solar radiation reaching the Earth. This would lead to cooling, not warming, so some other factor must be influencing the climate more strongly in recent times—that factor is human activities. Also, Milankovitch cycles lead to climate changes on the order of a few degrees in thousands of years; this is much slower than the rapid changes we observe today.