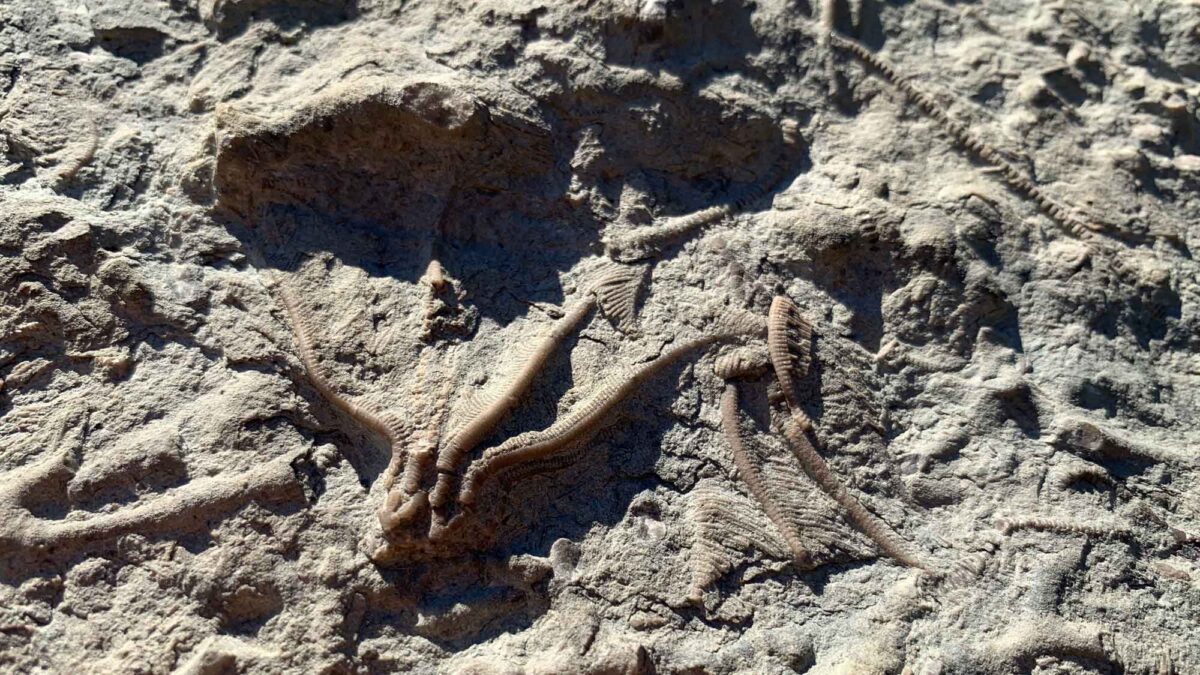 Scientists use two approaches to date rocks and fossils. Relative age dating is used to determine whether one rock layer (or the fossils in it) are older or younger than another base on their relative position: younger rocks are positioned on top of older rocks. Absolute age dating (or, radiometric dating) determines the age of a rock based on how much radioactive material it contains.

Note: The following is modified from "Ithaca is Gorges: A Guide to the Geology of the Ithaca Area, Fourth Edition" by Warren D. Allmon and Robert M. Ross (2007).

Answering this frequently encountered question in geology requires two separate steps. They correspond to two different ways that we express how old something (or someone) is in our everyday experience. When we ask how old an object or a person is, we can answer either with a number or by comparison to something (or someone) else. Thus, you might say “I am older than my brother” or “my friend’s car is older than mine.” This is called relative age dating, because the age of something is stated relative to the age of something else. We can also give an age in numerical units, such as days, months, years, etc. So your response might be “I am 21 years old” or “my friend’s car is one year old.” This is usually called absolute age dating or numerical age dating.

Relative dating in geology depends on two assumptions and one observation:

Rocks that formed from sediment (mud, sand, gravel) are called sedimentary rocks. Such rocks are usually seen to be arranged in stacks of layers called strata. When we look at sedimentary strata, we can ask which layers are older; that is, which formed first? By reference to our common experience with such things as stacks of magazines or newspapers on the living room floor, or even trash in a wastebasket, we can suppose that, in the absence of evidence to the contrary, the oldest layer in a stack of rocks is at the bottom, and that the youngest is at the top. This principle of geological reasoning is called superposition. 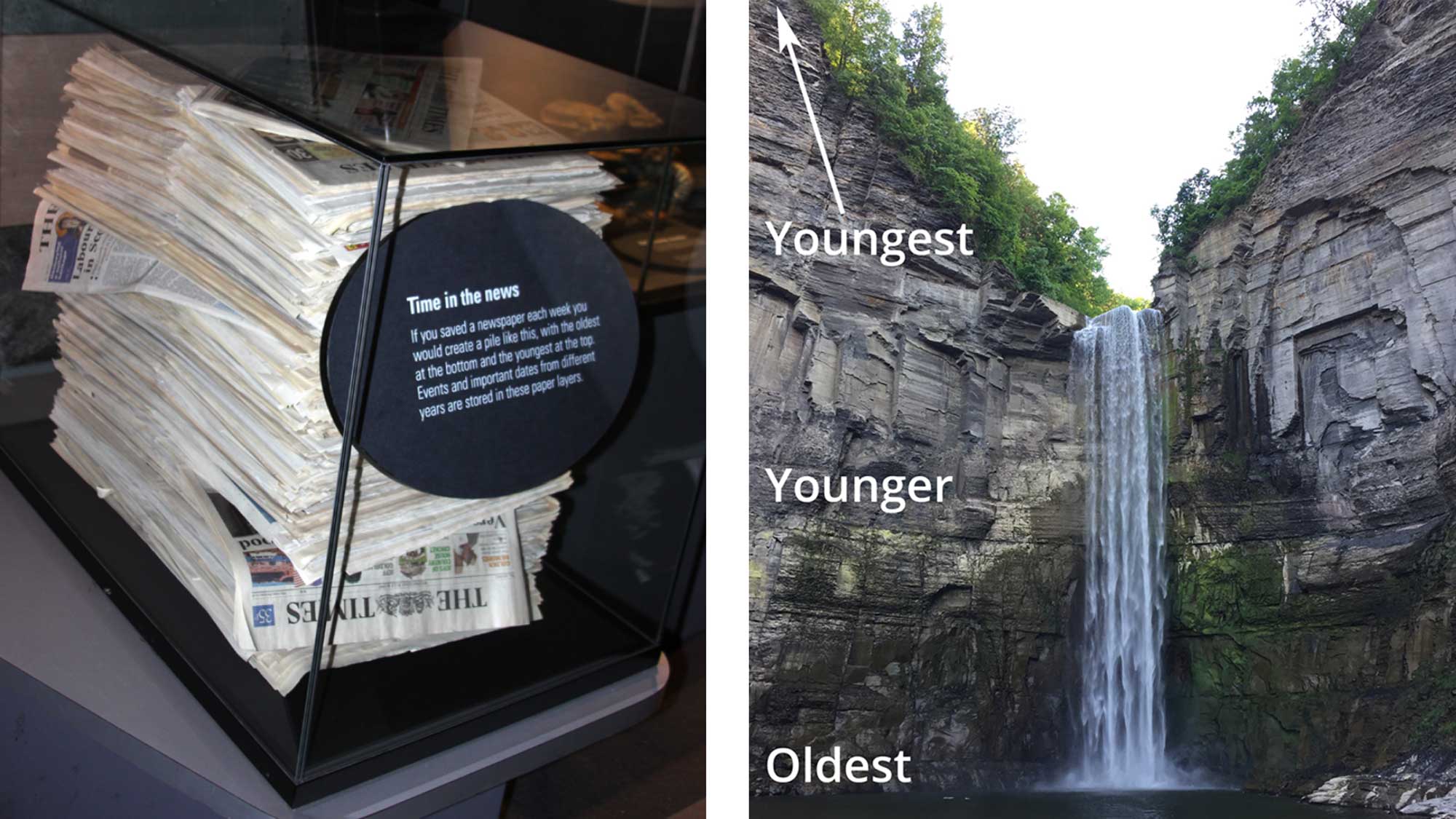 Left: A stack of newspapers in a museum exhibit at the Natural History Museum, London. The sign reads, "Time in the news. If you saved a newspaper each week you would create a pile like this, with the oldest at the bottom and the youngest at the top. Events and important dates from different years are stored in these paper layers. Right: Sedimentary rocks exposed at Taughannock Falls near Trumansburg, New York, illustrating the Principle of Superposition: younger rocks are positioned on top of older rocks. Image by Jonathan R. Hendricks. This work is licensed under a Creative Commons Attribution-ShareAlike 4.0 International License.

When we examine sedimentary rocks, we often find that they contain fossils. Fossils are the remains or traces of organisms from the geological past that are preserved in rocks. When we look at fossils in stacks of sedimentary rocks from many places, we notice that different kinds of fossils occur in different layers and that the order of the various kinds of fossils from bottom to top is always the same. For example, sediments that contain woolly mammoth fossils are always found on top of rocks that contain dinosaur fossils, which in turn are always found on top of rocks that contain trilobite fossils (which are some of the oldest animal fossils known). This is called biological succession.

When we look at fossils in stacks of rocks in different places, we make the reasonable assumption that, in the absence of evidence to the contrary, layers containing the same fossils in separate locations are similar in age. This is called correlation. The consistency of biological succession in different places gives us confidence that this assumption is usually a reasonable one.

These assumptions and this observation allow us to document series of fossils that occur in different layers of rocks. As we travel to more and more places, correlating stratigraphic sequences of biological succession as we go, we construct a grand series of fossils, oldest at the bottom and youngest at the top. For convenience we divide the long series of fossils into sections and name them. The names are usually based on places at which rocks of that particular age were first well-studied and represent the interval of time during which a particular set of organisms existed. This series of names is the Geologic Time Scale, the internationally accepted system for telling time in geology. 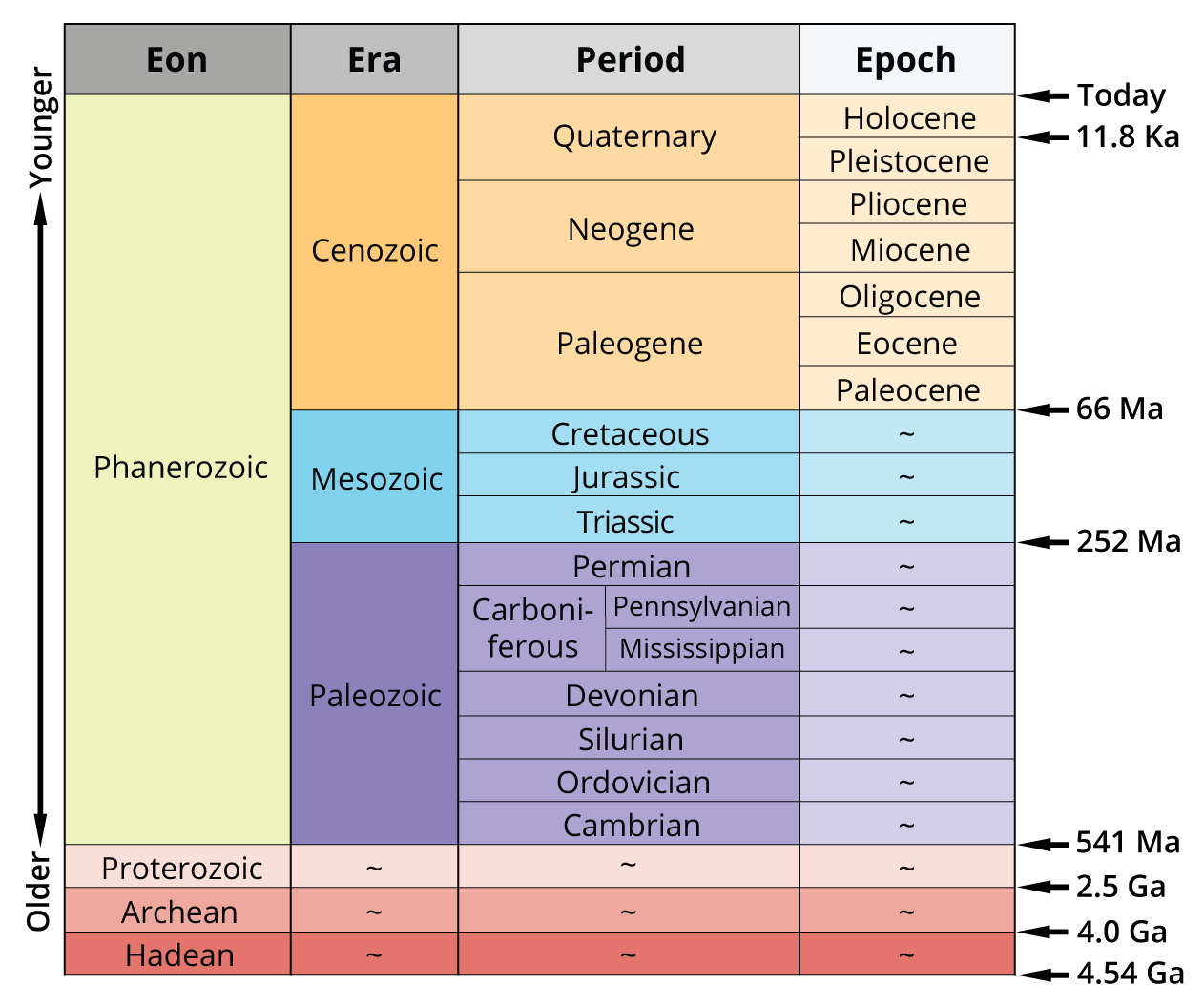 The geologic time scale. Image by Jonathan R. Hendricks. This work is licensed under a Creative Commons Attribution-ShareAlike 4.0 International License.

The numerical ages of rocks in the Geologic Time Scale are determined by radiometric dating, which makes use of a process called radioactive decay – the same process that goes on inside a nuclear reactor to produce heat to make electricity. Radiometric dating works because radioactive elements decay at a known rate. They act like ticking clocks, and let geologists measure how much time has passed since those elements were sealed into a particular mineral in a rock (learn more here).

Radiometric dating provides the numbers of years that are found on most versions of the Geologic Time Scale (a more detailed version that the one shown above is available from the Geological Society of America). These numbers are revised occasionally, as better radiometric methods are developed or new datable rocks are found.

Fossils themselves usually cannot be directly dated radiometrically because they don't usually contain radioactive minerals. We must therefore combine information from fossils and radiometric dates from rock layers above or below to answer the question, “How do Scientists Date Rocks and Fossils?” 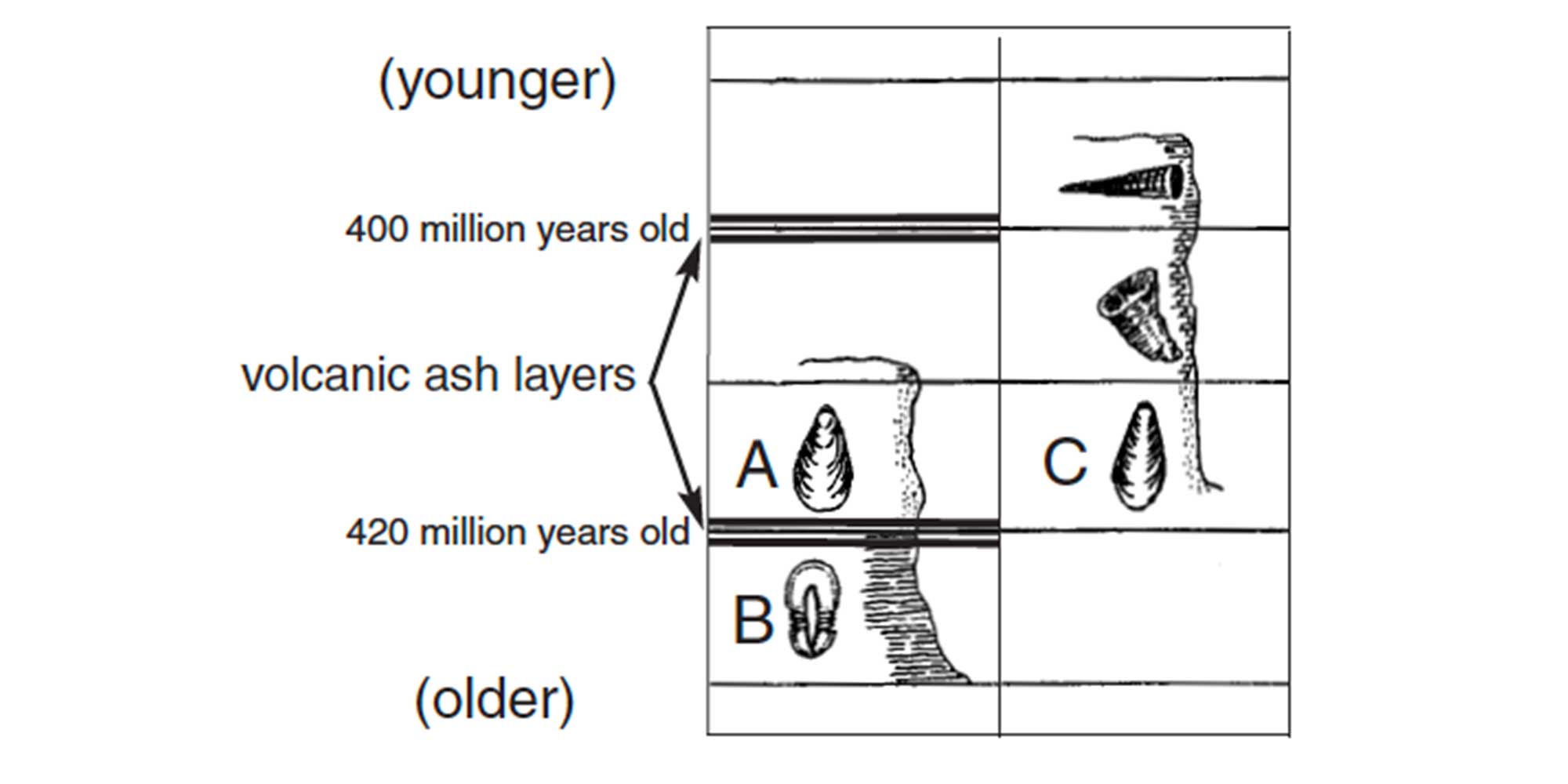 How geological dating works. Fossil A is younger than Fossil B (by the principle of superposition), but we don’t know how old either fossil is in years unless we use radiometric dating. Superposition is used to relate the fossils to the radiometrically-datable layers of volcanic ash that happen to have fallen in between the formation of the fossil-bearing rock layers. Fossil A is between 400 and 420 million years old. Fossil B is older than 420 million years. If we now find one of these fossils (Fossil C) in another location that lacks radiometrically-datable layers, we assume by correlation (until we find contrary evidence) that they are about the same age as they are at our original location. The horizontal lines in the diagram are called lines of correlation.