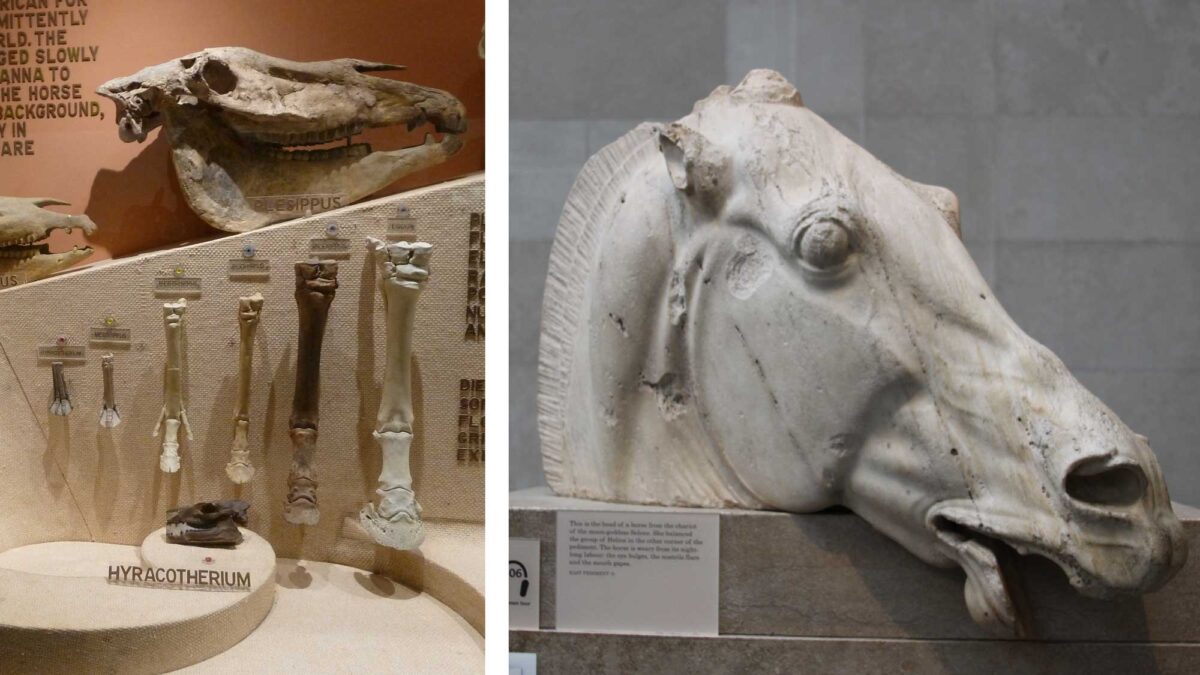 Paleontology is the scientific study of fossils to learn about the history of non-human life on Earth. Archaeology is the scientific study of human-made artifacts and structures to learn about ancient people and cultures. Scientists in each field (paleontologists and archaeologists) may both conduct field excavations and add newly-discovered specimens to a museum. Otherwise, there is very overlap between paleontology and archaeology.

Image above. Left: Fossil horse skulls and bones that would potentially be studied by a paleontologist. Right: Marble carving of a horse's head. This is one of the Elgin Marbles, which decorated the Parthenon in Athens in the 400s BCE; it might be studied by an archaeologist. Photographs by Jonathan R. Hendricks. 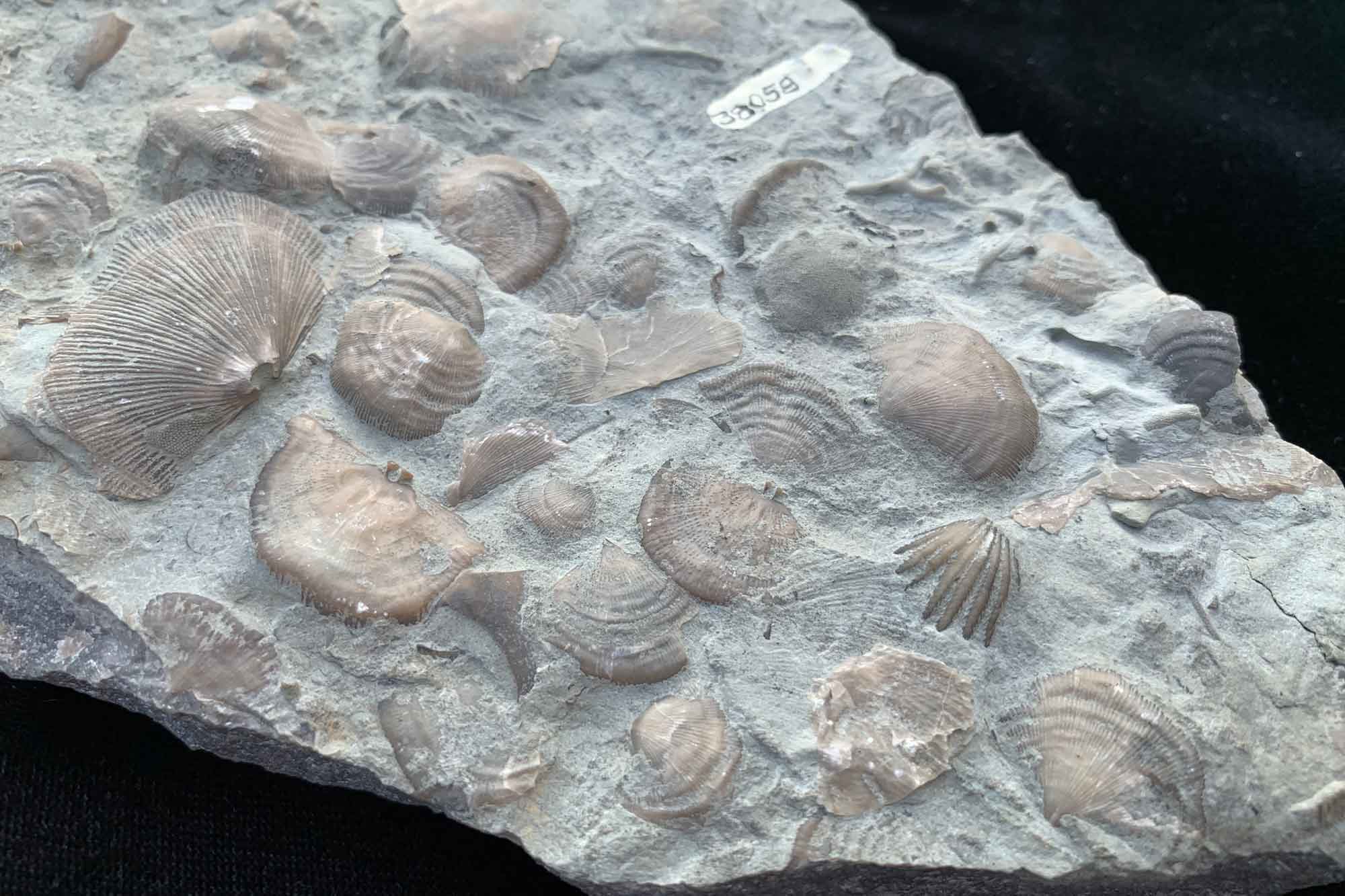 Slab of Ordovician-aged limestone that is covered with brachiopod fossils (invertebrates). Photograph by Jonathan R. Hendricks

Micropaleontologists study tiny fossils like foraminifera that are difficult to see without a microscope; they use these fossils to document ancient climates and compare the ages of rocks found in different regions.

Vertebrate paleontologists study fossils of animals with backbones. Dinosaurs like T. rex were vertebrates, as were Megalodon (shark), Tiktaalik (fishapod), and the wooly mammoth (mammal).

Finally, paleobotanists study ancient plant life. Their research helps us to reveal what ancient ecosystems on land looked like, as well as to document ancient climate.

Are you interested in a career in paleontology? This guide may be a useful place to begin. 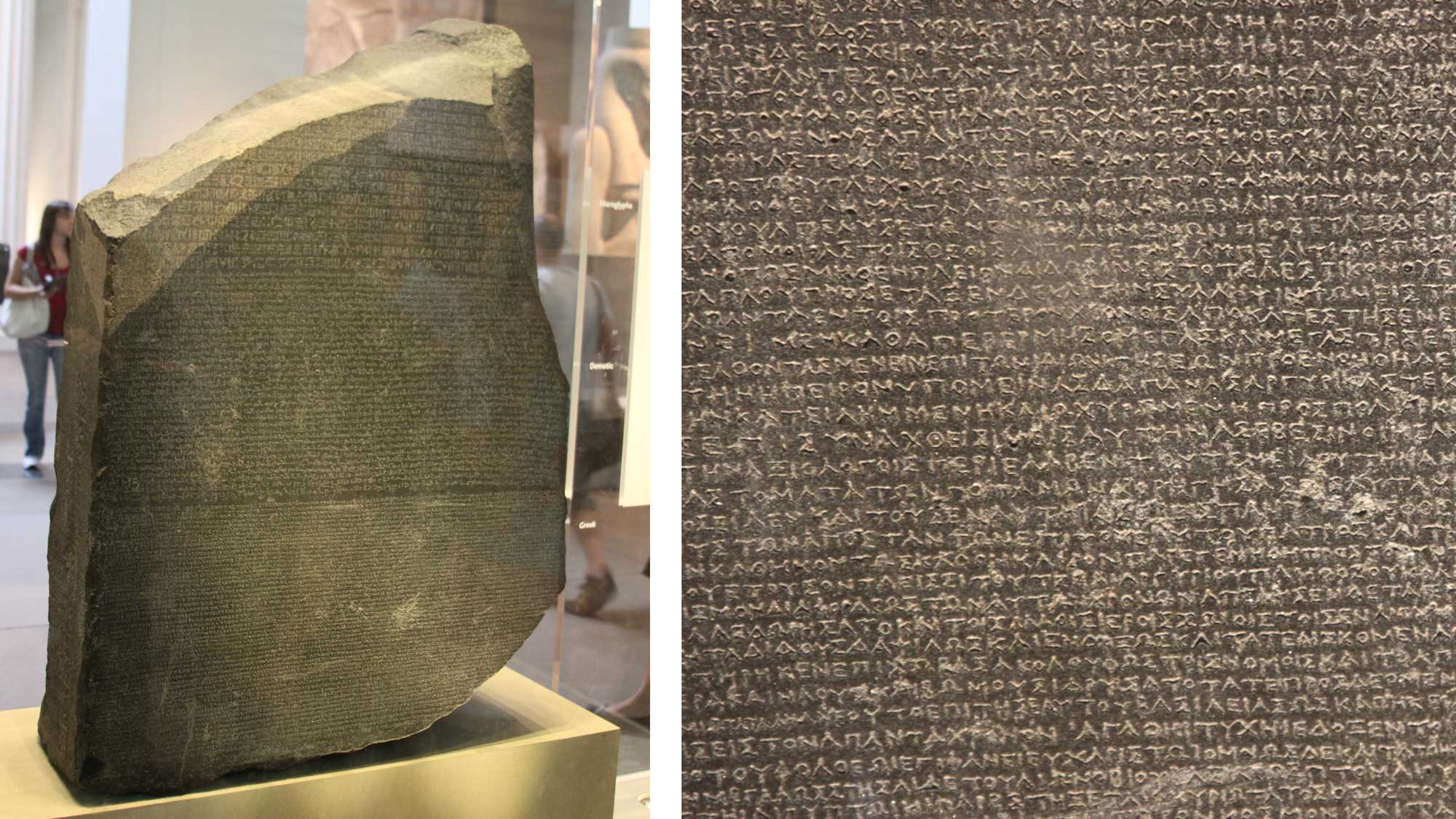 The Rosetta Stone (British Museum), which presents the same passage of text in Ancient Egyptian (hieroglyphic and Deomitc scripts) and Ancient Greek, dates to 196 BC and is an archaeological artifact. Photograph by Jonathan R. Hendricks.

Archaeology is the scientific study of physical evidence of human-made artifacts and structures (also called “material culture”) to understand past human life, cultures, and civilizations. Examples of physical evidence include stone tools, jewelry, art, tablets with writing, and buried building foundations. Archaeologists might focus their studies on certain time periods, regions, or civilizations, for example the archaeology of ancient Mesopotamia (Assyriology), Egypt (Egyptology), or Greece and Rome (Classical archaeology).

Is Dr. Ellie Sattler from Jurassic Park a paleontologist or archaeologist?

Dr. Sattler studies ancient plants, so she is a paleontologist and, more specifically, a paleobotanist.

Is Dr. Indiana Jones from Raiders of the Lost Ark a paleontologist or archaeologist?

In the movie, Dr. Jones searches for the Ark of the Covenant which was, according to the Book of Exodus, created by Moses. Thus, Dr. Jones is an archaeologist.

Is Dr. Ross Geller from the TV show Friends a paleontologist or archaeologist?

If you found an arrowhead in a field, would you seek out a paleontologist or an archaeologist to learn more about it?

Because an arrowhead is a tool that was created by a person, you should take it to an archaeologist to learn more.

I want to be a paleontologist! A guide for students.