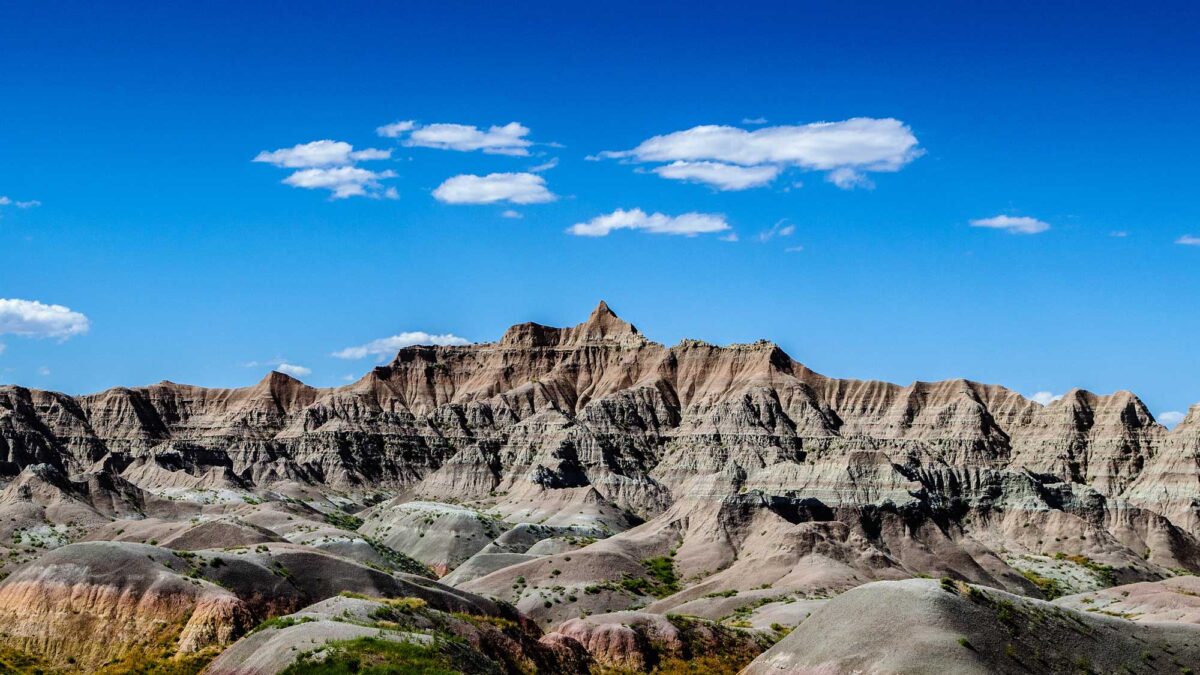 Snapshot: Overview of the topography of the Great Plains region of the northwest central United States, including North Dakota, South Dakota, Montana, and Wyoming.

Topics covered on this page: Overview; The Missouri Plateau; The Black Hills; The High Plains; Resources. 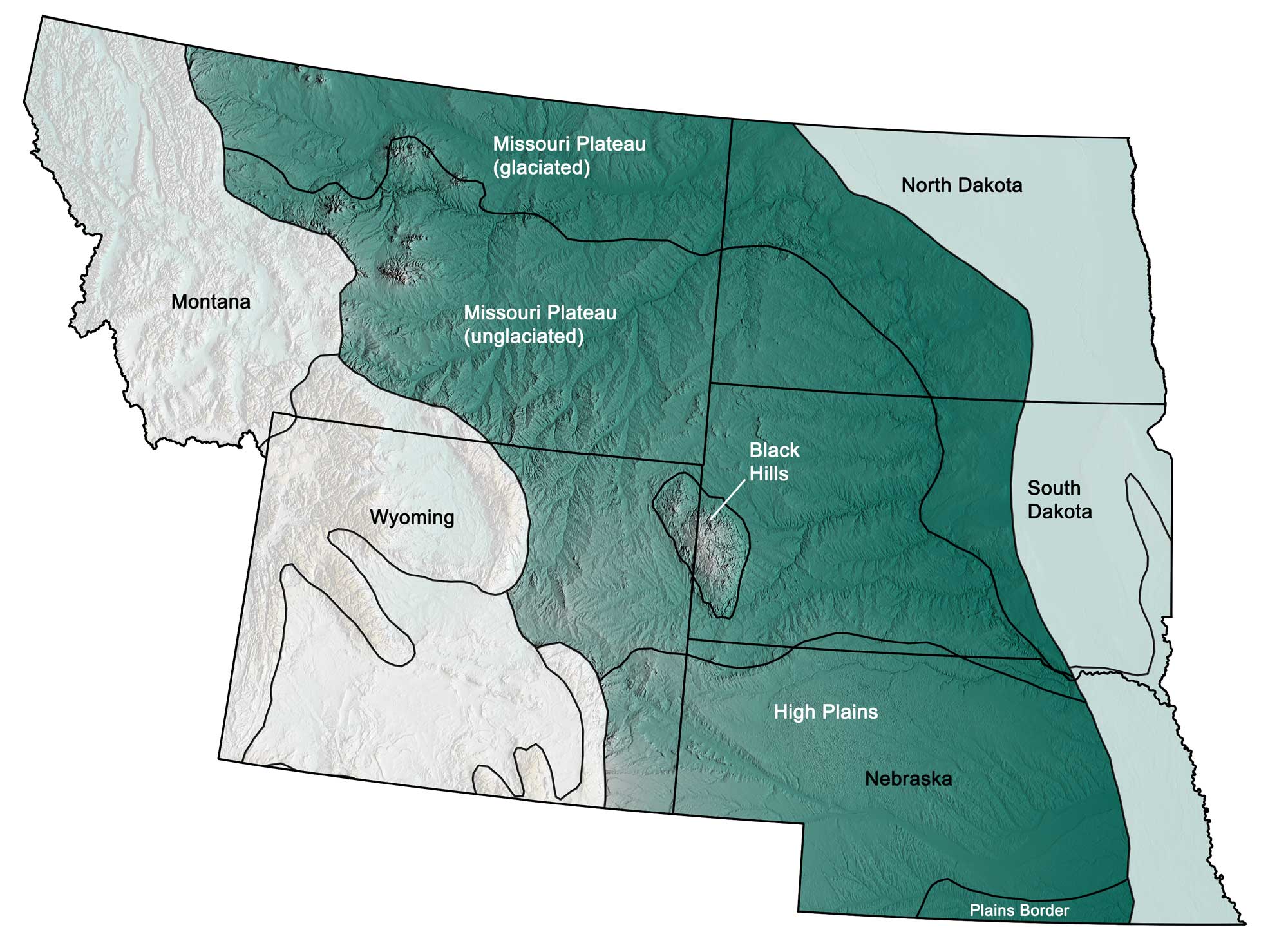 The Missouri Plateau can be further divided into glaciated and unglaciated sections; the Plains Border, a subsection of the High Plains, extends from Nebraska into Kansas. Similarly to the Central Lowland, the Great Plains region has a basement of flat-lying Precambrian metamorphic and igneous rocks, overlain by Paleozoic and Mesozoic sedimentary rocks. The Mesozoic sediments consist largely of materials eroded from the Rocky and Ozark mountains and deposited in the Western Interior Seaway, which covered this area during the Cretaceous. Today, the Missouri River runs through this region, where it both deposits and erodes sediments. 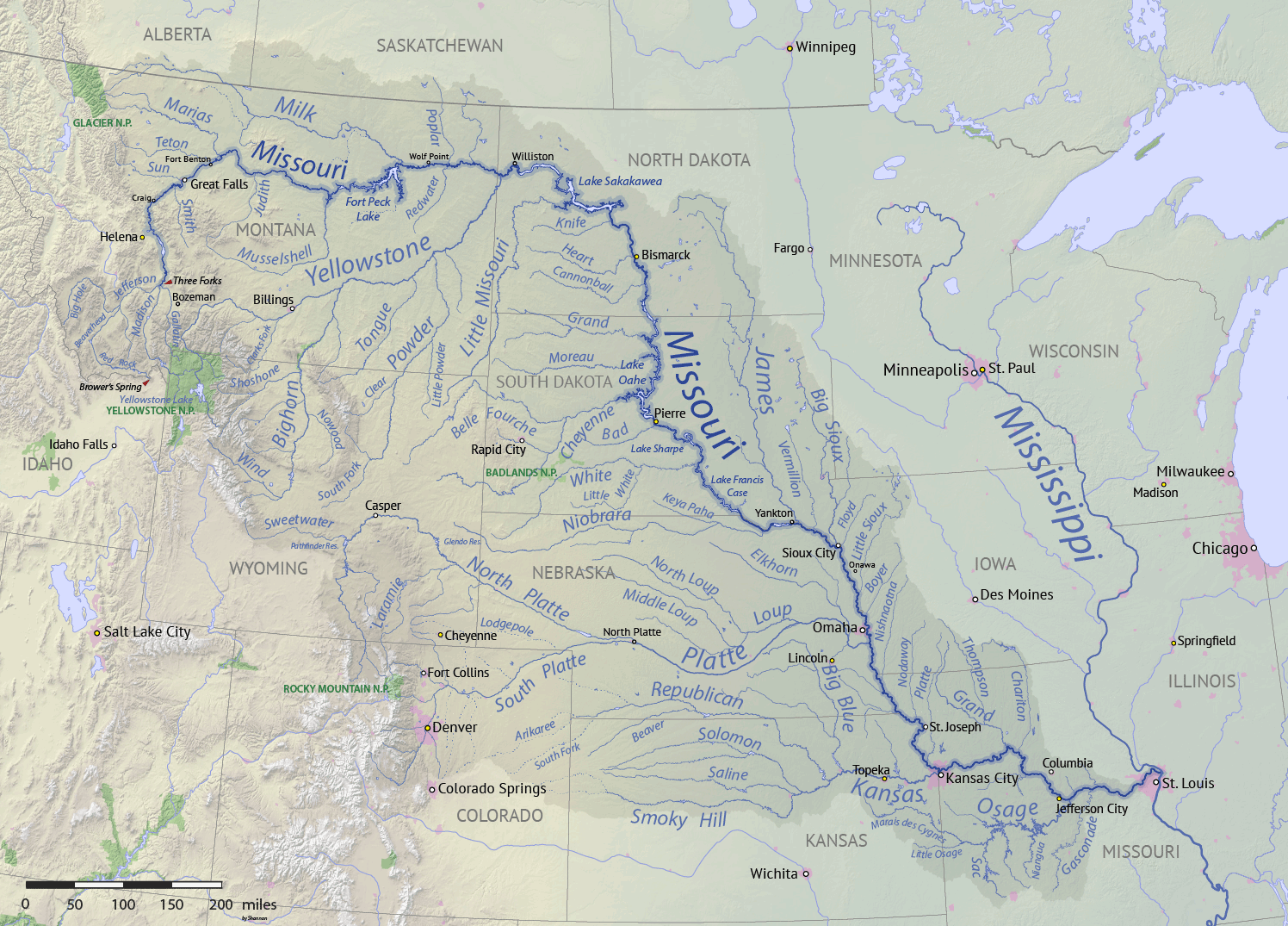 Glacial sediments can be found in the northern Great Plains, which was covered by ice sheets during the last glaciation. Additionally, some glacial sediment has been transported southward by the Missouri River and its tributaries.

The unglaciated portion of this area is a rugged expanse of semiarid terrain characterized by landforms sculpted from eroded sedimentary rock and glacial sediment, including badlands and dunes. Older surface features such as buttes and well-developed river systems also provide breaks in the generally flat topography. A butte can form when resistant capstone allows for the surrounding rock to be eroded away at a faster pace than the rock beneath the resistant layers. 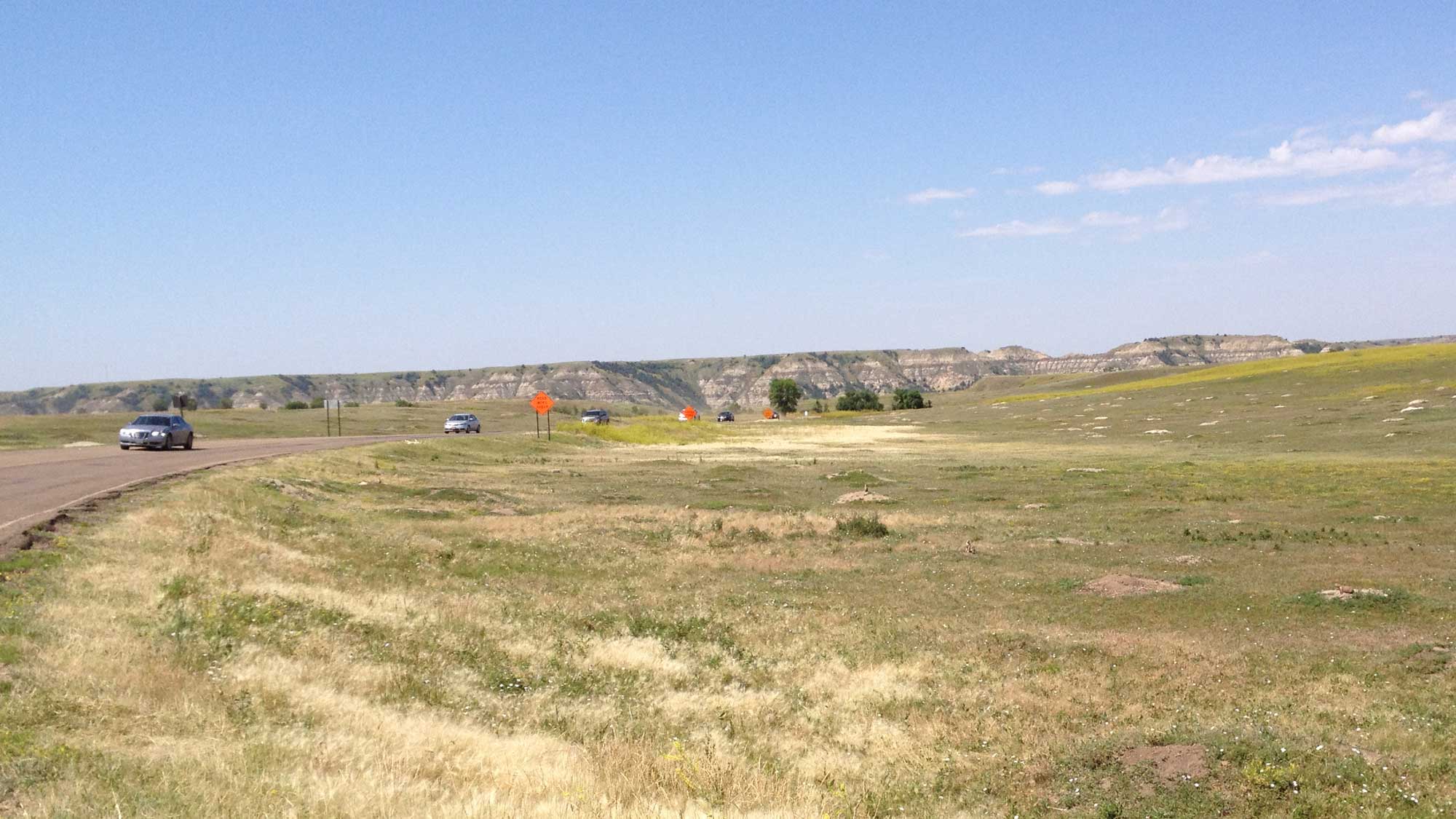 Over time, the differing rates of erosion will create a flat-topped hill with steep slopes. Such formations are a hallmark of an old erosional surface, since large buttes often take millions of years to form. On the Missouri Plateau, these topographical features are created from sedimentary rock that formed during erosional and depositional events associated with the uplift of the Rocky Mountains and the sedimentation of the Western Interior Seaway.

Badland topography forms in semiarid areas that experience occasional periods of heavy rainfall. Here, sloping ground composed of sandstones and calcareous sediments underlain by clay or other soft materials is eroded over time into an intricate series of gullies and ravines. Different layers of rock weather at different rates, resulting in a variety of sculpted spurs and buttresses. Harder layers crop out of softer sediments to form ledges, and isolated erosion-resistant patches protect the sediments beneath, forming tall pillars of softer rock with a hard capstone. In the Northwest Central US, badlands can be found in Wyoming, Nebraska, Montana, and the western Dakotas, and are well known for their mammal fossils. Several scenic badlands areas have been set aside as protected land, including Theodore Roosevelt National Park in North Dakota, Badlands National Park in South Dakota, Makoshika State Park in Montana, and Toadstool Geologic Park in Nebraska. 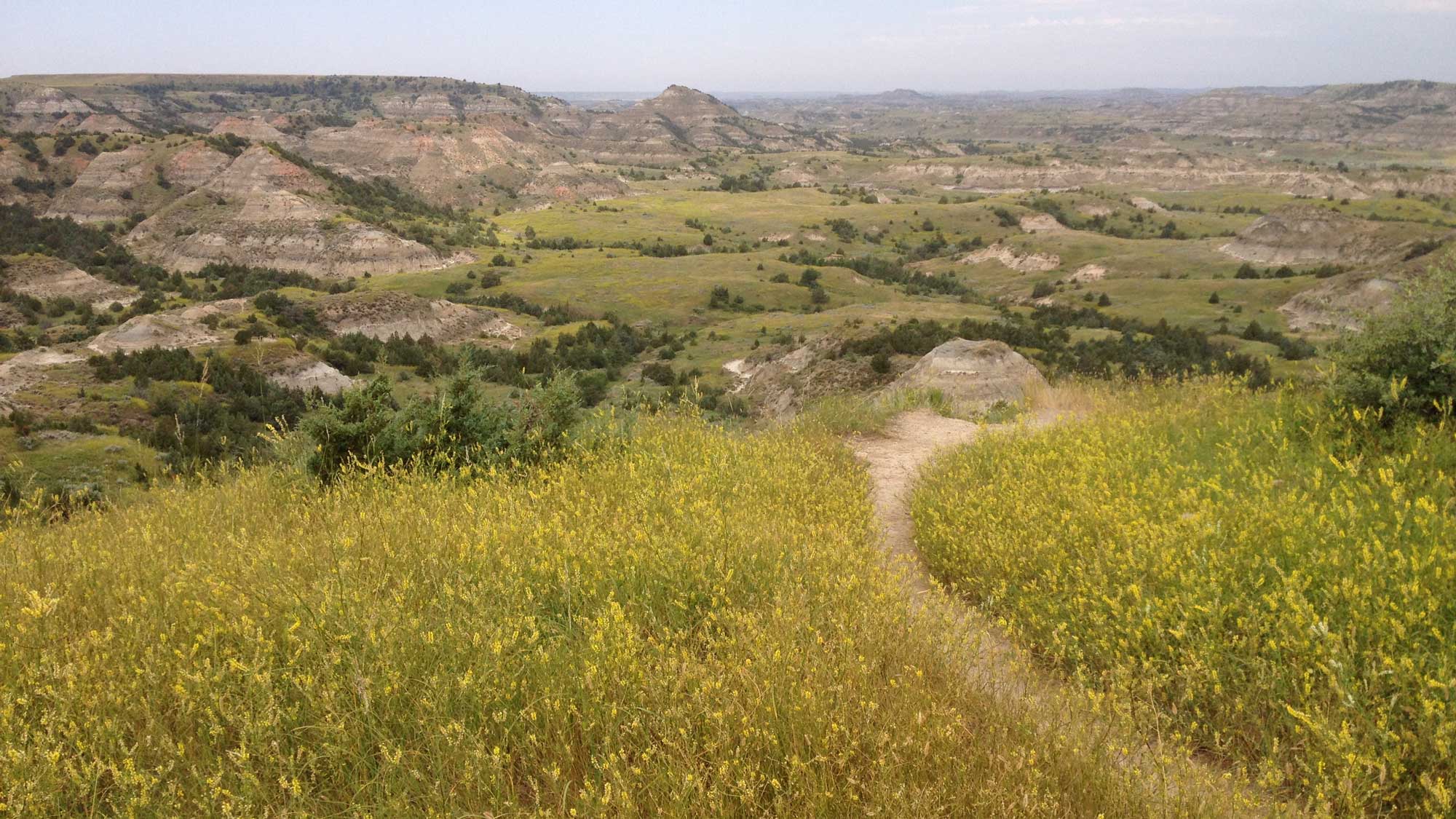 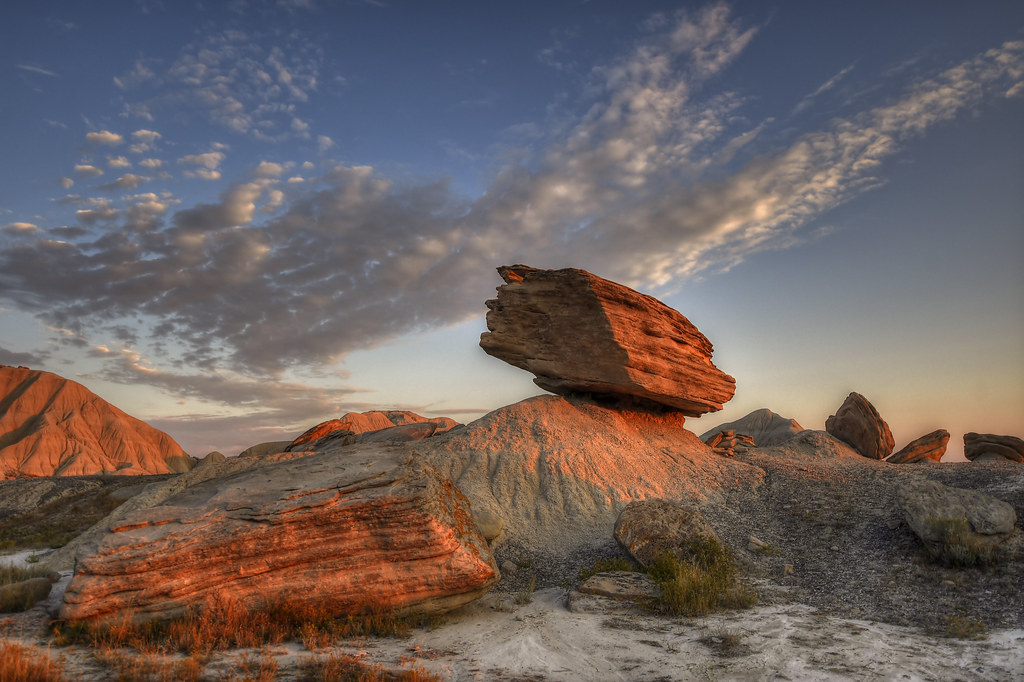 The Sandhills of Nebraska are sand dunes that were created by wind-blown glacial material. 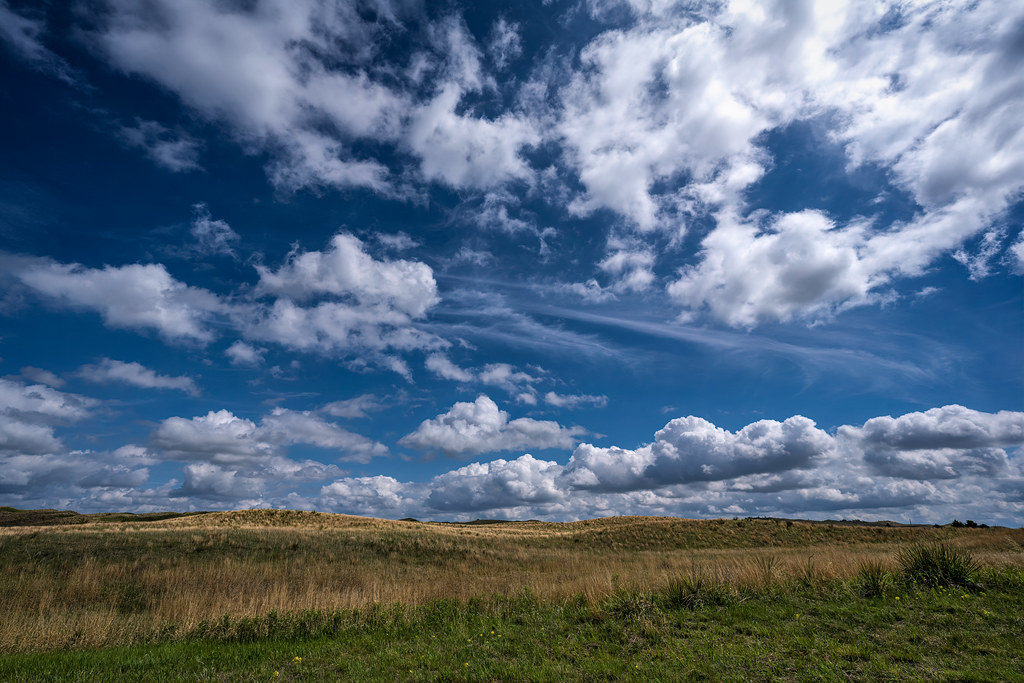 During the last glaciation in the late Pleistocene, winds blowing along the edge of the ice sheet concentrated layers of sand and glacial loess in central Nebraska. This unique area, which covers 52,000 square kilometers (20,000 square miles), is the largest sand dune formation in the country. The dunes’ porous composition allows them to absorb rainwater, helping to recharge the Ogalalla Aquifer that underlies the area and supplies fresh water to much of Nebraska.

The glaciated portion of the Missouri Plateau contains typical glacial features such as moraines and kettle ponds. The Prairie Pothole Region, an expanse of tallgrass prairie filled with thousands of shallow pothole wetlands, covers most of this area, extending from Alberta and Saskatchewan all the way south into Iowa. 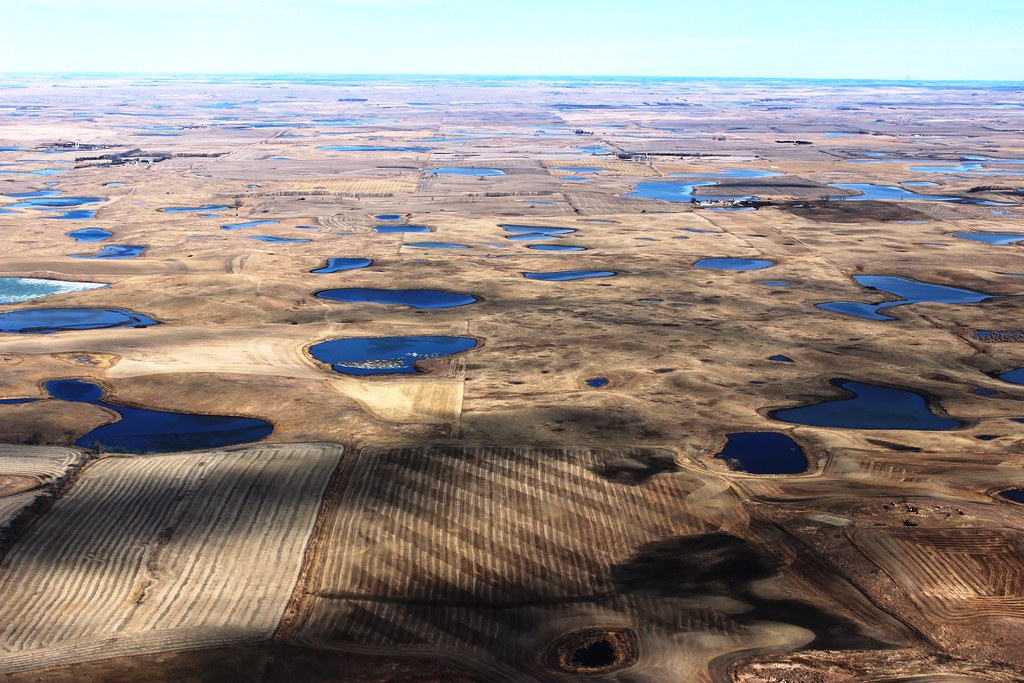 These potholes were formed because of glacial activity during the Wisconsinian glaciation, and the wetlands they support provide a haven for more than 50% of North America’s migratory waterfowl. Today, however, more than half of the Prairie Pothole Region has been drained and converted for use in agriculture.

The Black Hills are an isolated mountain range that outcrops within western South Dakota and northeast Wyoming. 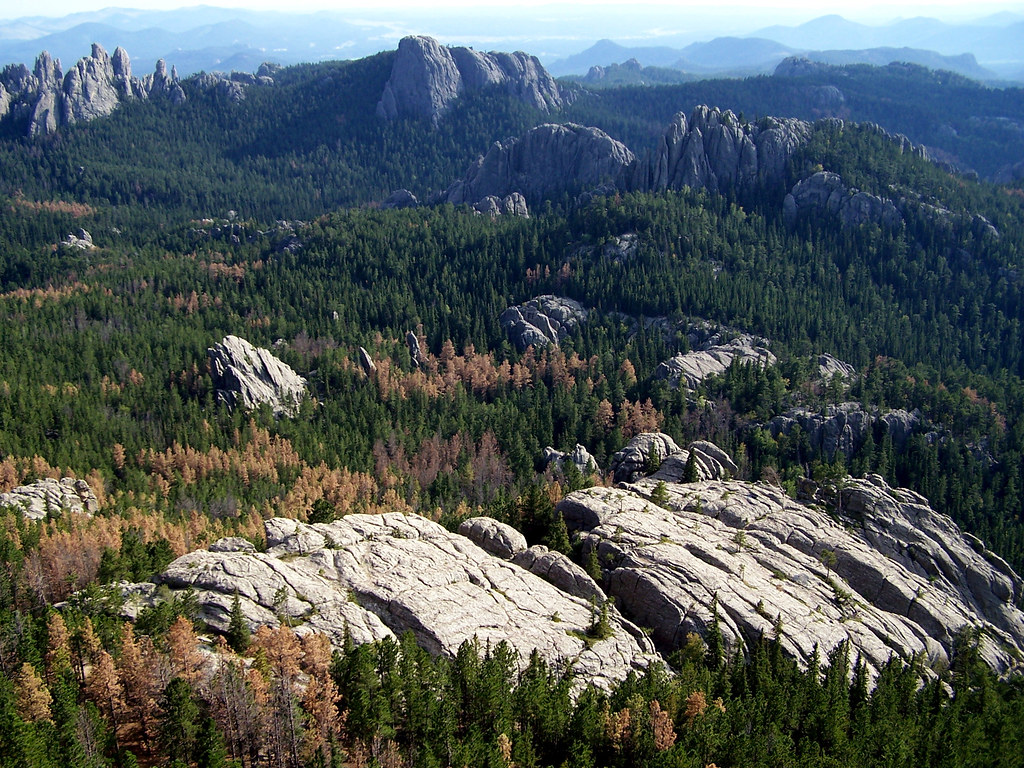 The mountains contain a core of 1.8-billion-year-old Precambrian granite, generated during the formation of the North American craton. This core is surrounded by a ring of metamorphic rock and layers of Paleozoic and Mesozoic sediment, including sandstone and limestone. The Black Hills were uplifted during the Cretaceous, as the Laramide Orogeny warped the landscape. Since then, the softer overlying sediment has been largely eroded, exposing remnants of the mountains’ granitic core. This granite has been used as the base material for two notable sculptures: Mount Rushmore and the Crazy Horse Memorial. The highest elevation in the Black Hills is Harney Peak, which stands at 2208 meters (7244 feet) above sea level. 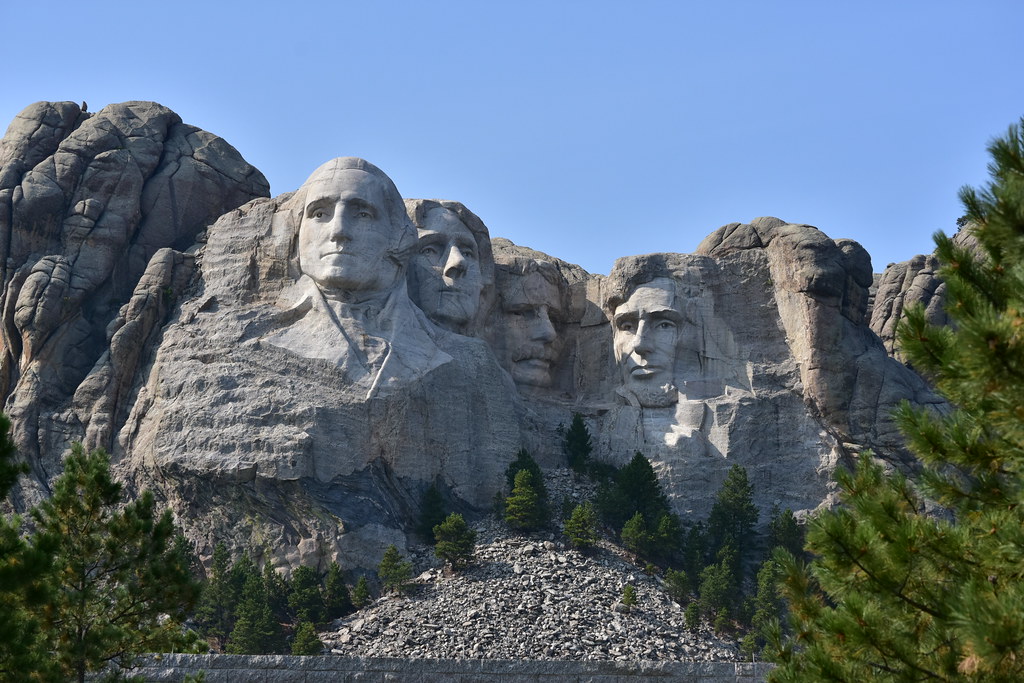 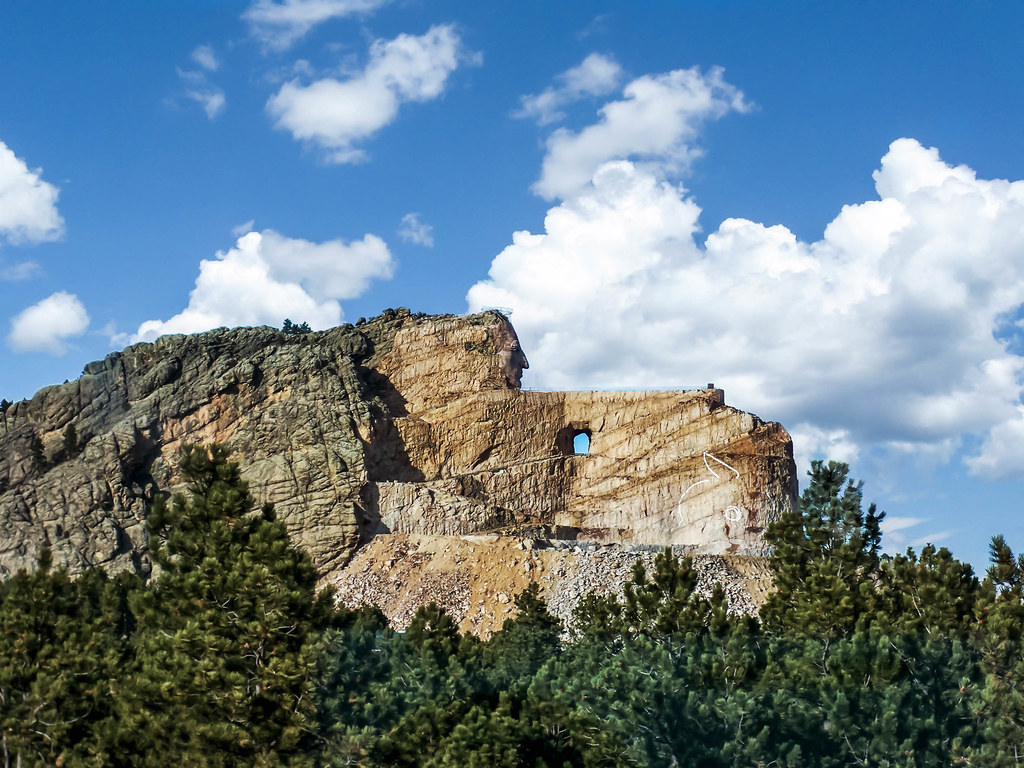 The High Plains, part of the vast North American Interior Plains, is a low area with flat relief that reflects 500 million years of cratonic stability in the continent’s interior. Much of this area was submerged by the Cretaceous Western Interior Seaway, leading to the deposition of sediment that overlies the area’s igneous and metamorphic core.