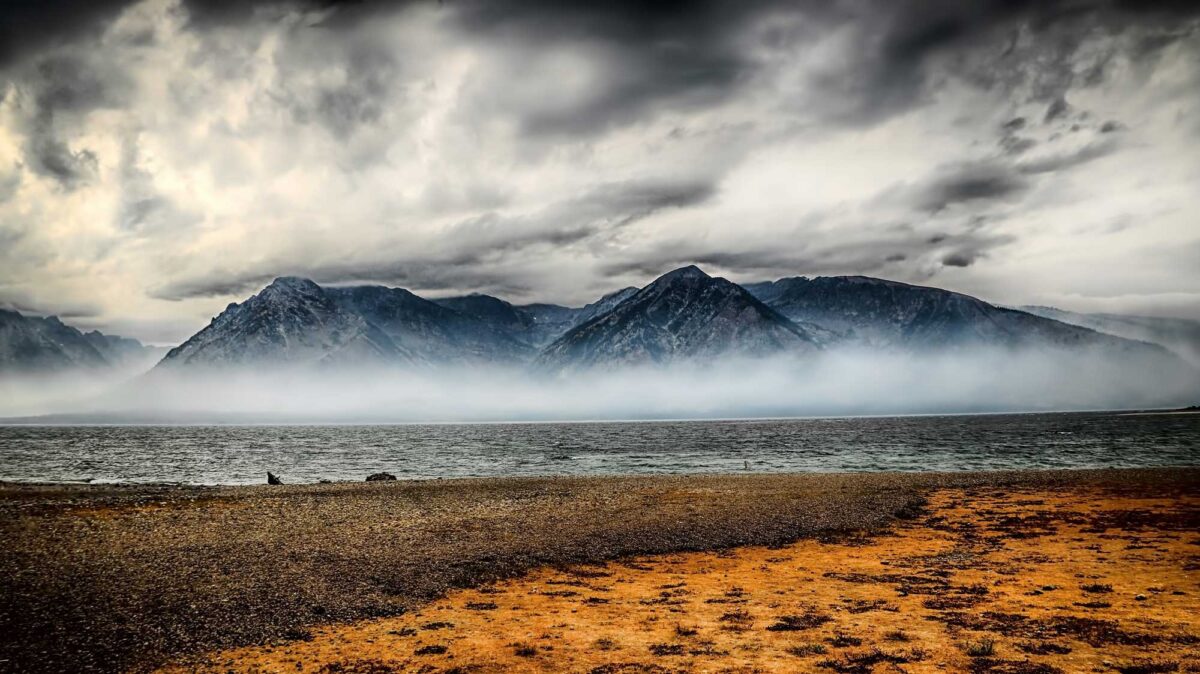 Snapshot: Overview of the topography of the Rocky Mountain region of the northwest central United States, including Montana, Idaho, and Wyoming. 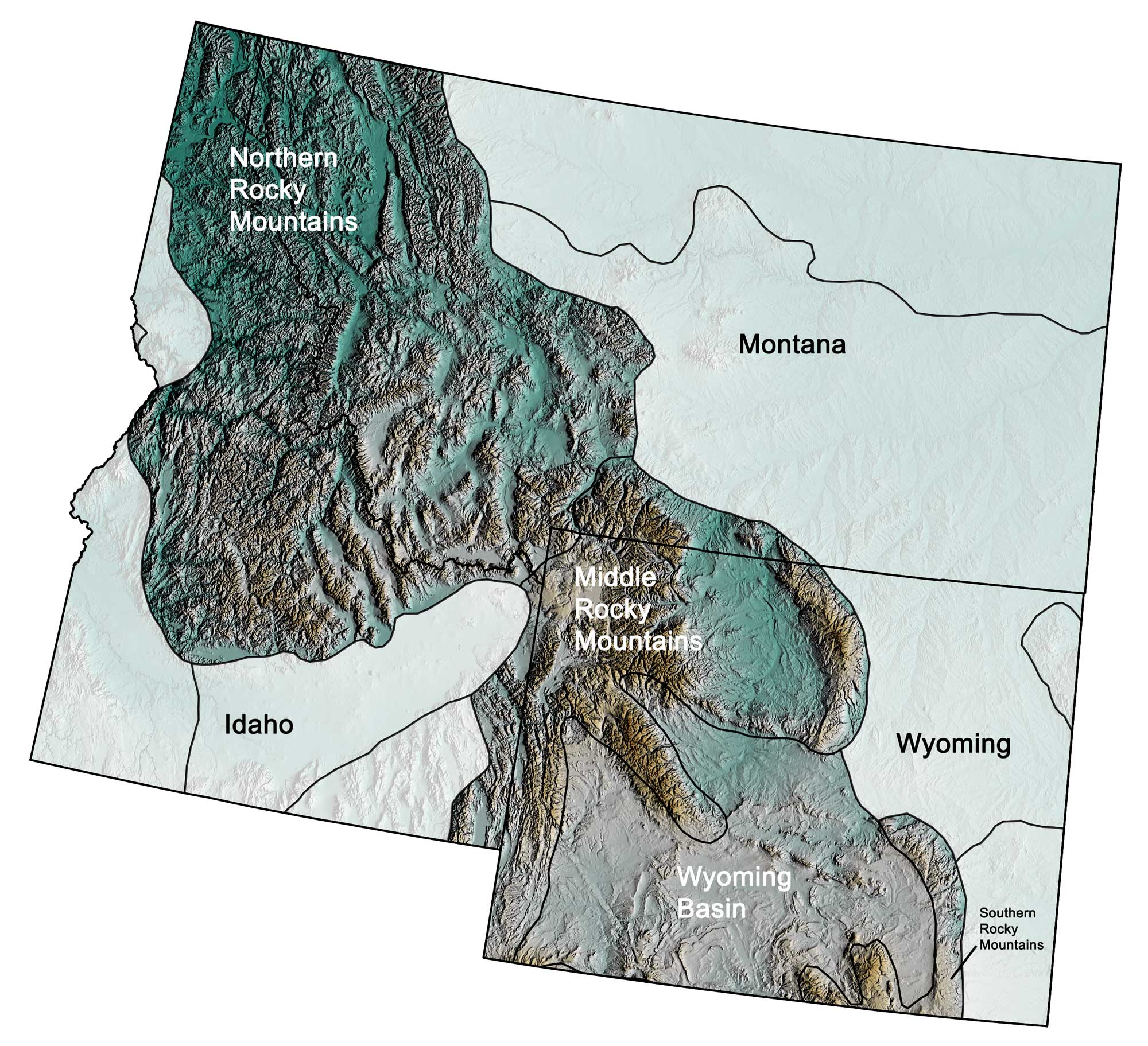 The Rocky Mountain region, west of the Great Plains, is divided into the Northern, Middle, and Southern Rockies as well as the Wyoming Basin. The Rocky Mountains, which extend north into Canada and south into New Mexico, formed during the late Mesozoic when crustal compression led to deformation and thrust faulting. The mountains consist of igneous, sedimentary, and metamorphic rocks that were uplifted during the Sevier and Laramide orogenies, around 80 to 55 million years ago. Today, the tallest mountains in the Rockies are found in the state of Colorado, where over 50 mountains have an elevation greater than 4270 meters (14,000 feet). In the Northwest Central, however, the tallest of the Rockies are located in Wyoming, where five peaks have an elevation of over 4000 meters (13,120 feet). 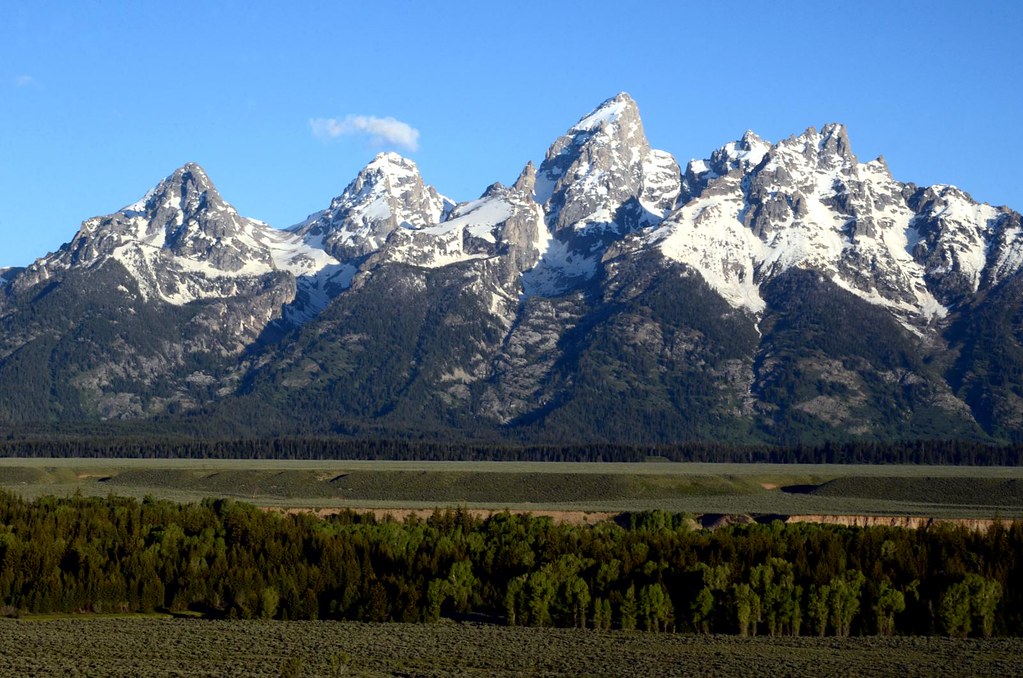 The Grand Tetons, some of the tallest mountains in Wyoming, as viewed from the Snake River Overlook. Grand Teton, the highest peak, is 4199 meters (13,775 feet) in elevation. Photograph by James Holloway (Flickr; Creative Commons Attribution-NonCommercial 2.0 Generic license).

The Rocky Mountains have undergone extensive erosion thanks to the forces of weathering and glaciation. During the Cenozoic, thousands of feet of sediment were eroded from the Rockies and transported eastward into adjacent basins, which formed because of downwarping during the mountains’ formation. The erosion of the Rockies has filled these basins, forming many flat-lying intermontane areas. Glacial erosion during the Quaternary created the jagged peaks and bowls that we see today. The Continental Divide runs along the crest of the Rocky Mountains. It separates North America’s watersheds into those that flow east and south into the Atlantic Ocean and the Gulf of Mexico, and those that flow west toward the Pacific Ocean.

The Northern Rocky Mountains are found in northeastern Washington, northern Idaho, western Montana and northwestern Wyoming. These mountains are lower than those to the south, reaching heights of around 3660 meters (12,000 feet). In Idaho and western Montana, the Northern Rockies are composed of a series of mountain ranges, including the Clearwater, White Cloud, Salmon River, Sawtooth, and Lost River mountains. These ranges formed as a result of the uplift and erosion of the Idaho Batholith, a mass of granitic plutons that formed during the Cretaceous when the oceanic Farallon plate subducted beneath the west coast of North America. The batholith, which underlies about 39,900 square kilometers (15,400 square miles) of central Idaho, was uplifted and exposed between 65 and 50 million years ago. 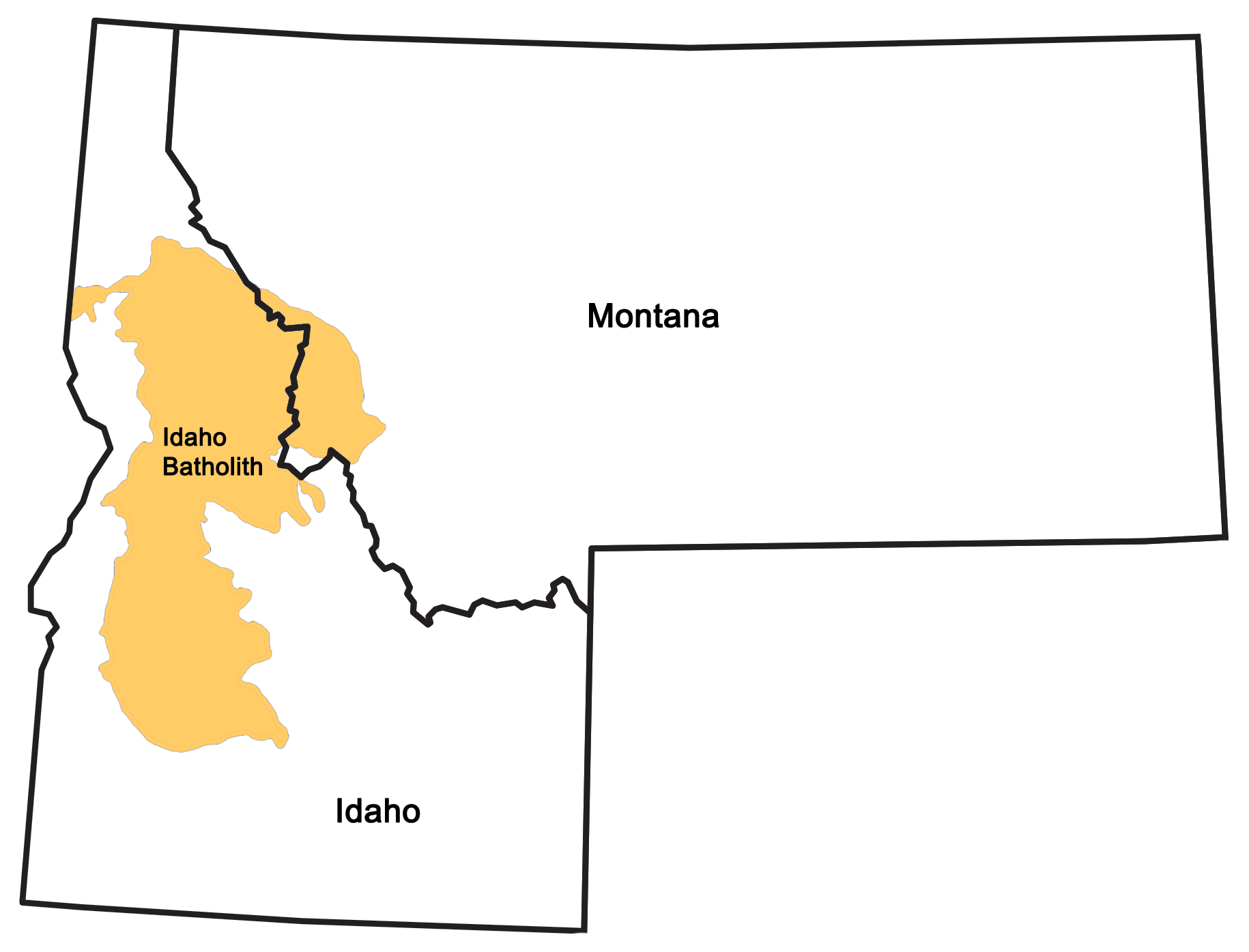 Extent of the Idaho Batholith. Image by Wade Greenberg-Brand; modified for the [email protected] project.

Since then, weathering and erosion have sculpted the batholith’s granitic rock into rough peaks. 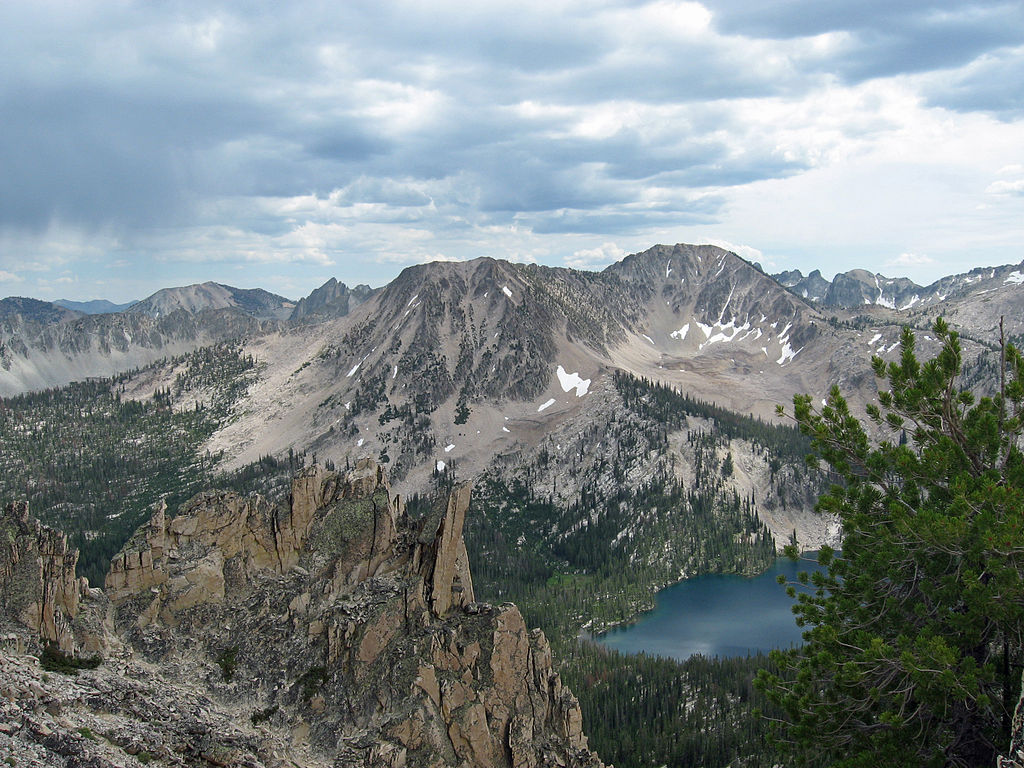 The Sawtooth Mountains above Toxaway Lake in the Sawtooth Wilderness, Idaho. These mountains are formed of granite from the Idaho Batholith. Photograph by GPA Photo Archive (Flickr; Creative Commons Attribution-ShareAlike 2.0 Generic license).

The Northern Rocky Mountains of Montana are also home to the Cordilleran fold-and-thrust belt, an area of deformed rock created by crustal compression during the collision of the oceanic Farallon plate with the North American plate. Blocks of older rock were thrust forward on top of younger strata, resulting in the Lewis Overthrust, a 320-kilometer-long (200-mile-long) overthrust fault that extends from central Montana into southern Alberta, Canada. Glacier National Park in northern Montana contains many outcrops related to this fault belt, including the 2770-meter-high (9080-foot-high) Chief Mountain. 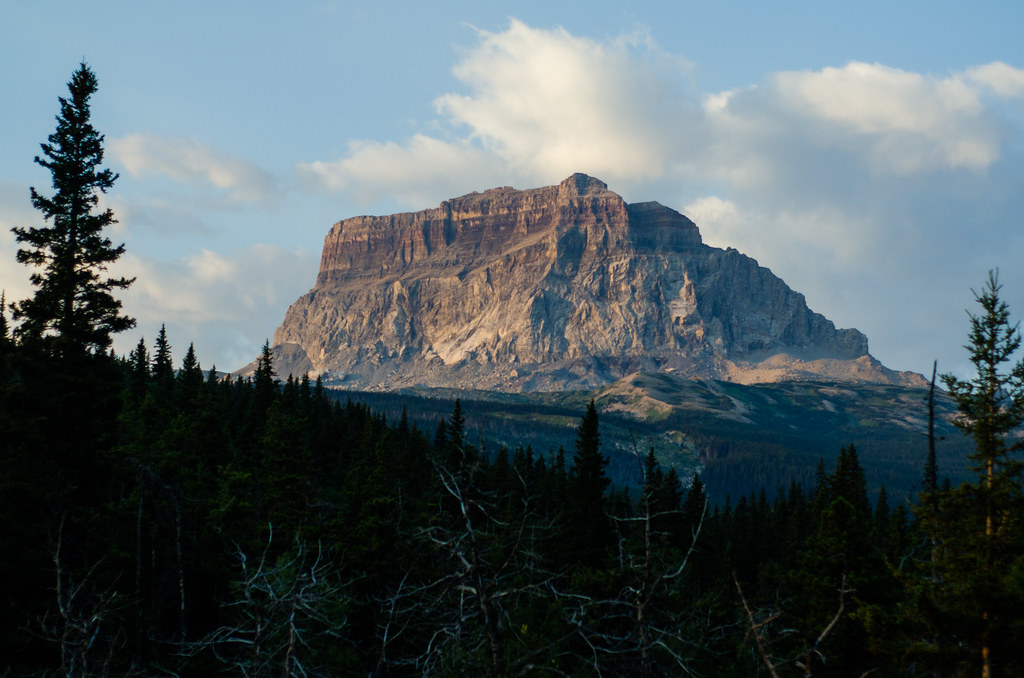 Chief Mountain, located in Montana’s Glacier National Park, is a block of Precambrian rock that rests directly atop younger Cretaceous shales as a result of thrust faulting along the Lewis Overthrust. The surrounding thrust sheet has been eroded, leaving behind the mountain as an isolated block. Photograph by Jeff Hitchcock (Flickr; Creative Commons Attribution 2.0 Generic license).

The Middle Rocky Mountains consist of multiple mountain ranges, including the Wasatch, Teton, Absaroka, Bighorn, and Wind River mountains. The Wasatch and Teton mountains were uplifted during the Cenozoic as a result of faulting, possibly due to processes related to extension in the Basin and Range region. Both ranges stretch in a north-south direction, and both border the Basin and Range: the Tetons stretch along the border of Wyoming and Idaho, and the Wasatch Range extends from the southeastern edge of Idaho down through Utah. The Wasatch Mountains (called the Bear River Mountains where they enter Idaho) formed from Cretaceous thrust faulting and the erosion of granitic batholiths followed by more recent uplift.

The Teton Mountains are the youngest range in the Rockies, formed as the rocks along one side of a normal fault were uplifted due to crustal extension between nine and six million years ago. Rocks along the other side of the fault were down-dropped, creating a valley that is today known as Jackson Hole. Thanks to the fault at the base of the range, the Tetons lack foothills on their eastern side, and rise sharply up to 2100 meters (7000 feet) above the valley floor. The Bighorn and Wind River mountains both have Precambrian rocks at their cores, with overlying Paleozoic and Mesozoic sedimentary rocks that were uplifted and exposed during the Cretaceous. The Wind River Mountains, formed by Mesozoic-Cenozoic thrust faulting, are the highest mountains in Wyoming with 40 peaks standing over 3960 meters (13,000 feet) high. Fault lines also cut through the flanks of the Bighorns, and the range’s western face is pierced by gorges. 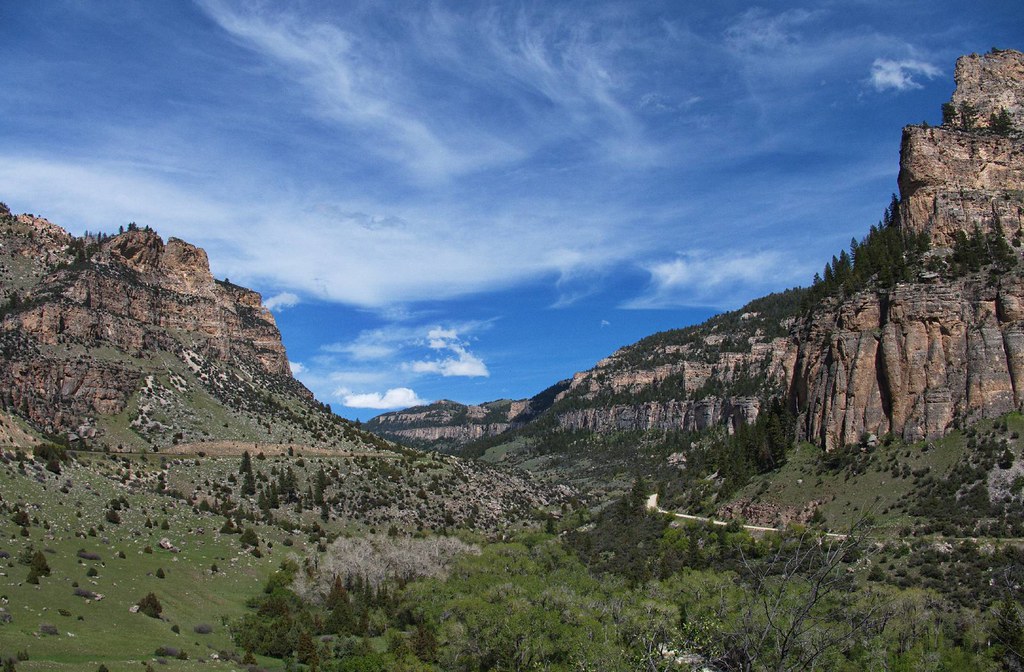 The Absaroka Range stretches across the Montana-Wyoming border, and forms the eastern boundary of Yellowstone National Park. The Absarokas are the remnants of a 23,000-square-kilometer (9,000-square-mile) Eocene volcanic field filled with poorly consolidated volcanic debris, igneous intrusions, and tuffs. These volcanic rocks are not related to igneous activity at the Yellowstone hot spot, which occurred more recently. This largely looser material has been easily eroded over time, leading to the Absarokas’ steep slopes and sharp, jagged topography. 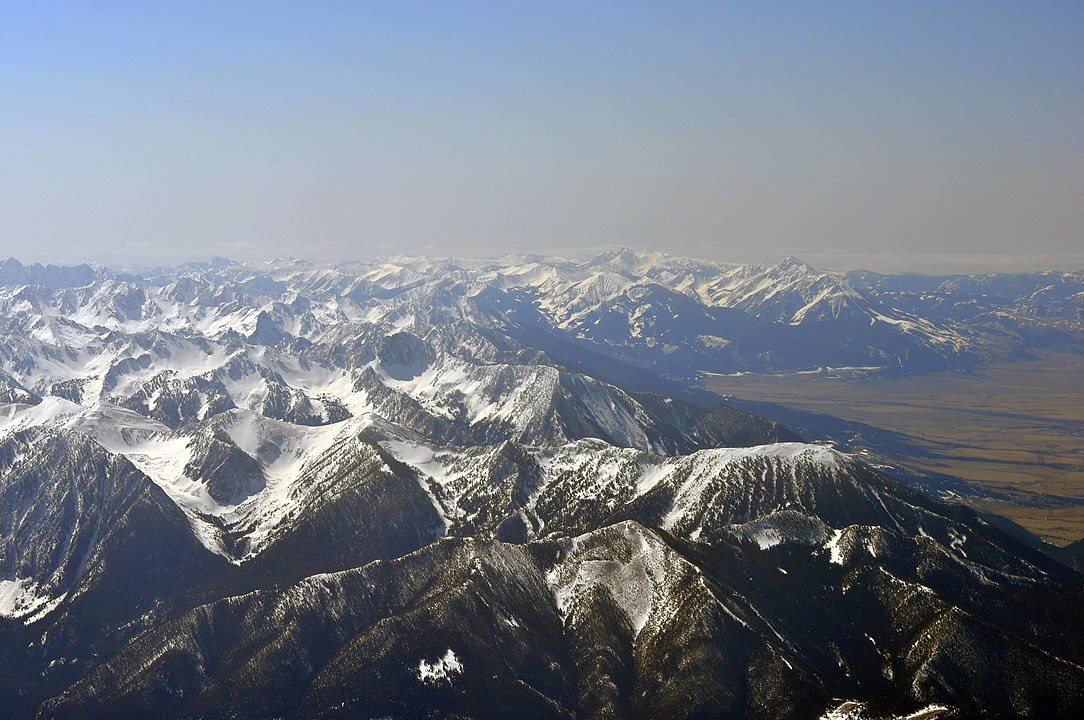 While much of the range was covered in ice during the last glaciation, weathering has destroyed most remnants of glacial landforms.

The Yellowstone Plateau is found in the Middle Rockies of western Wyoming, and is the location of Yellowstone National Park and the Yellowstone hot spot. Hot spots can occur under both continental and oceanic crust, and they provide evidence that the Earth’s tectonic plates move. Since hot spots are nearly stationary in the mantle, they remain in place as the plates slowly move over them, forming a chain of volcanic features that increase in age as one moves away from the hot spot. North America first overlapped with the Yellowstone hot spot in what is now Washington State, where it is thought to have produced the Columbia River flood basalts. As the North American plate continued to move, the hot spot wound up beneath the current Oregon-Nevada border, and began to generate a succession of violent, caldera-producing explosions interspersed with calmer basalt flows. We can easily trace the continent’s movement by following the path of calderas across Idaho to the northwestern corner of Wyoming and Yellowstone National Park. 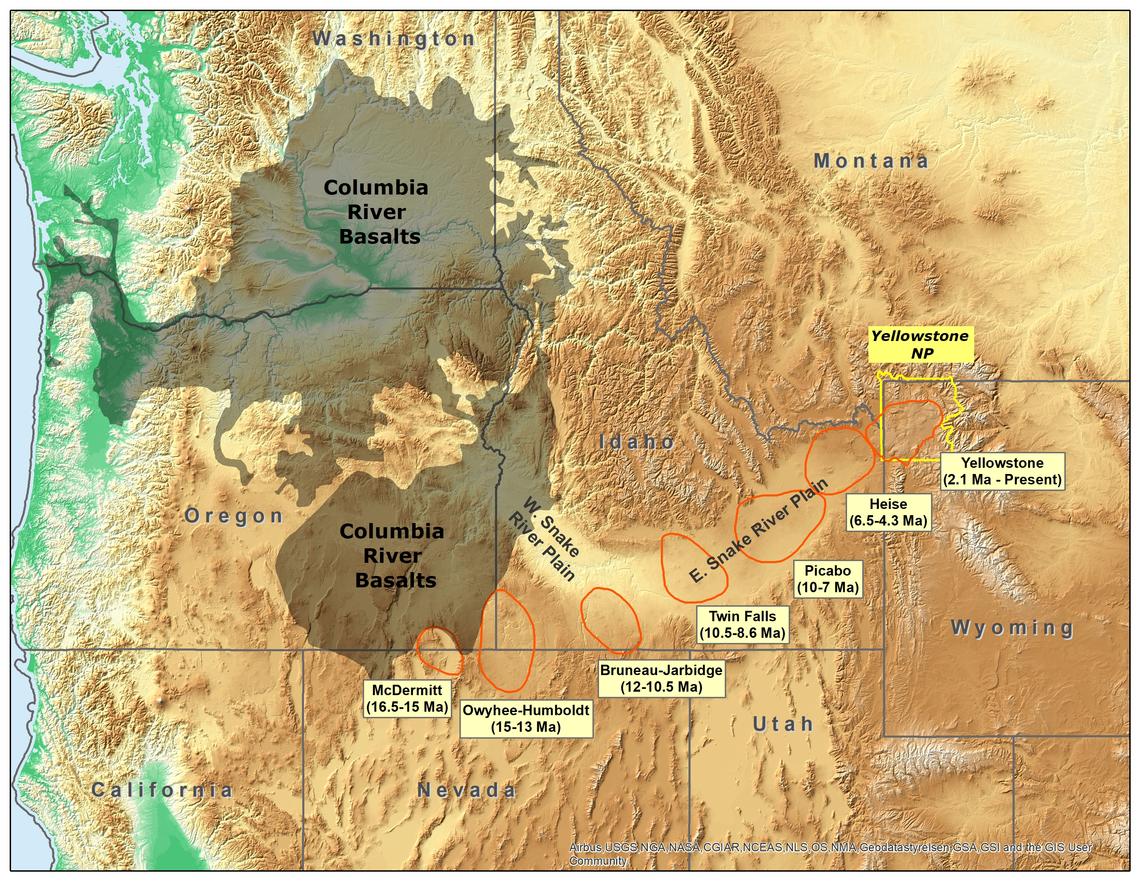 The most recent Yellowstone caldera was produced by an explosive volcanic eruption 640,000 years ago. 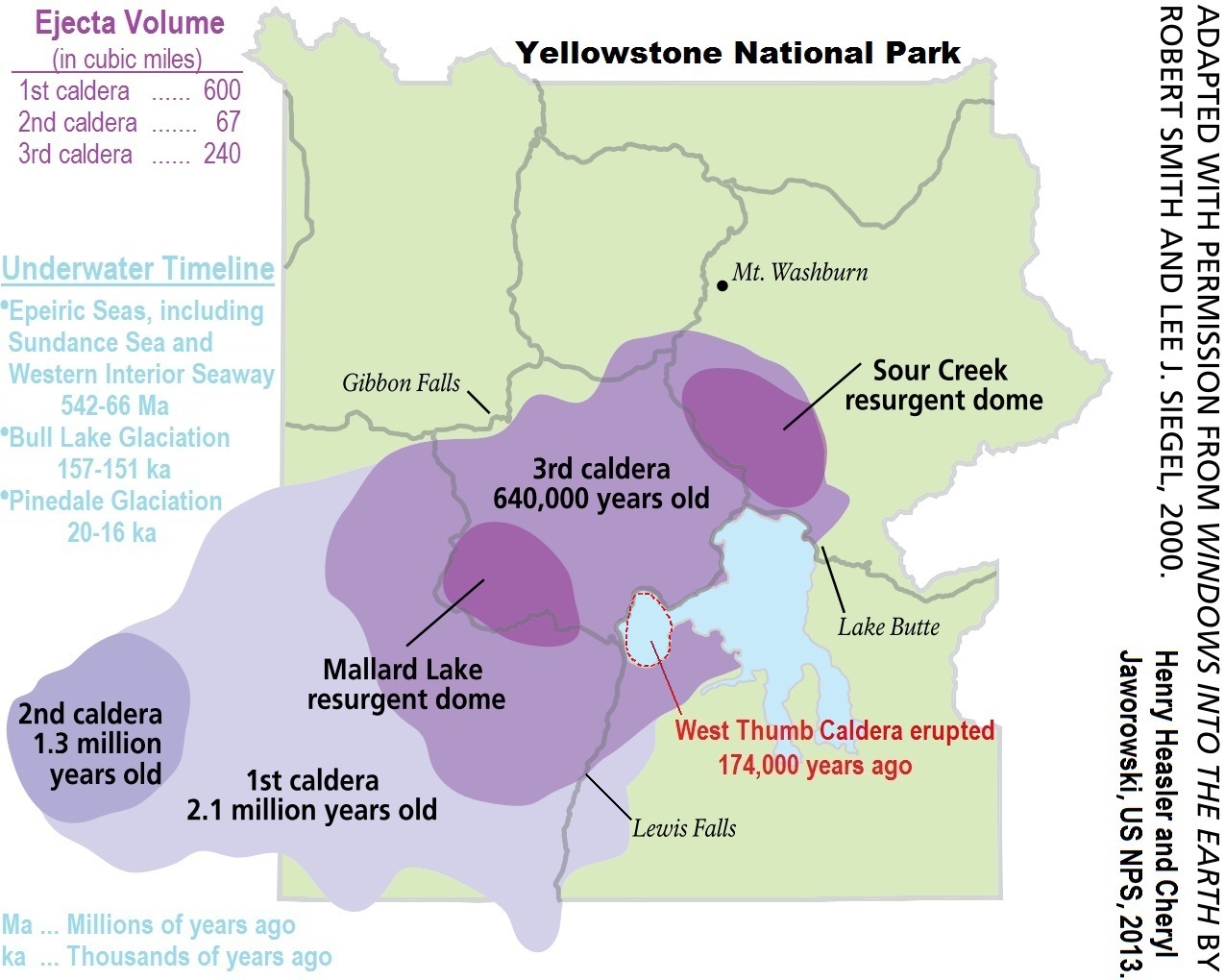 Extent of the Yellowstone caldera in Yellowstone National Park (Wyoming, overlapping into Montana and Idaho), created 640,000 years ago. The small area enclosed by the dotted line represents a small, younger caldera created during an eruption 174,000 years ago, and now filled by part of Yellowstone Lake. Image by USGS (Wikimedia Commons; public domain). 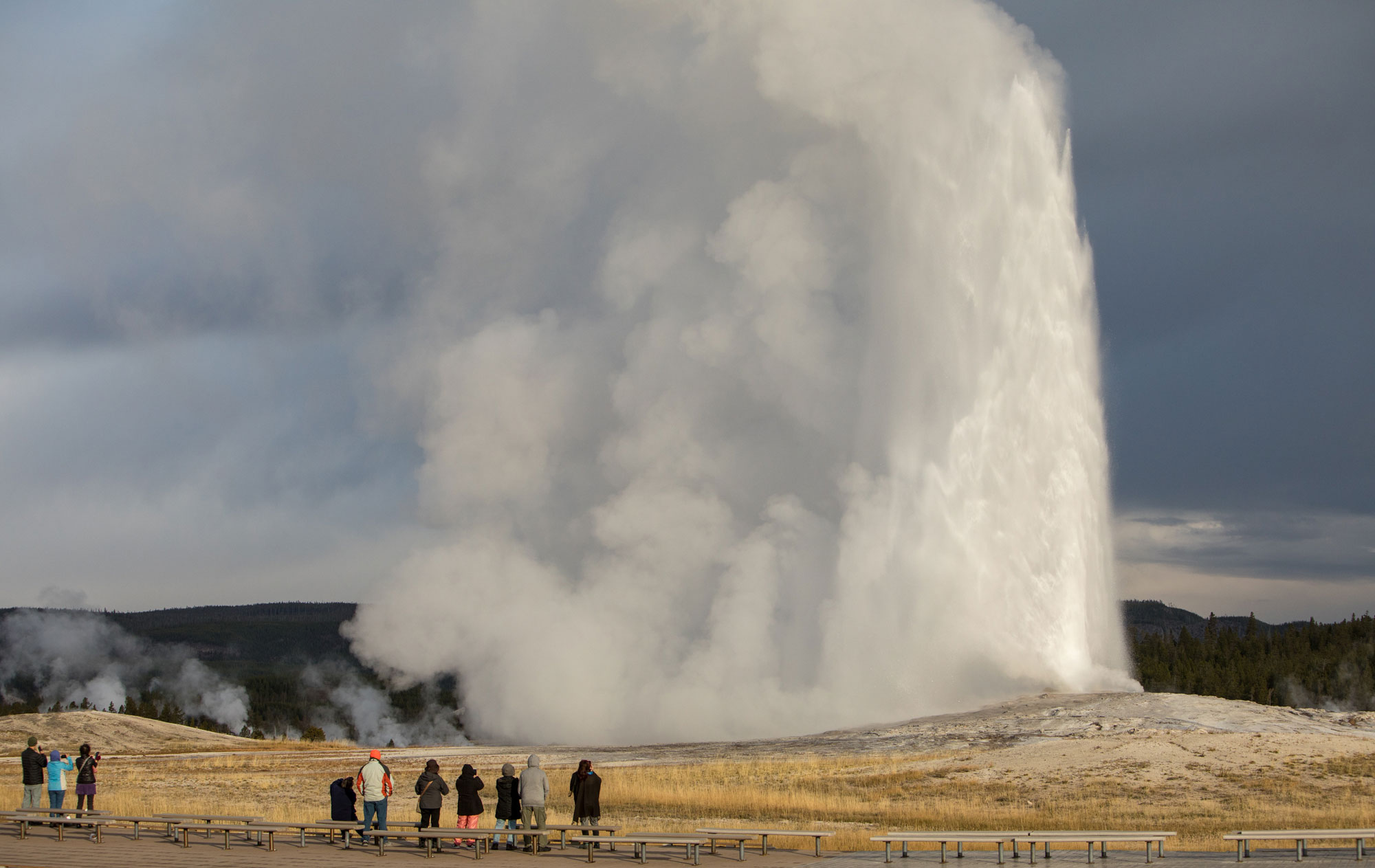 Old Faithful geyser erupting at Yellowstone National Park. The geyser is one of the most predictable in the world, with intervals of 60 to 90 minutes between each eruption, which can shoot 32,000 liters (8400 gallons) of boiling water as high as 56 meters (185 feet) and last for up to five minutes. Photo by Jim Peaco, NPS (National Park Service, public domain). 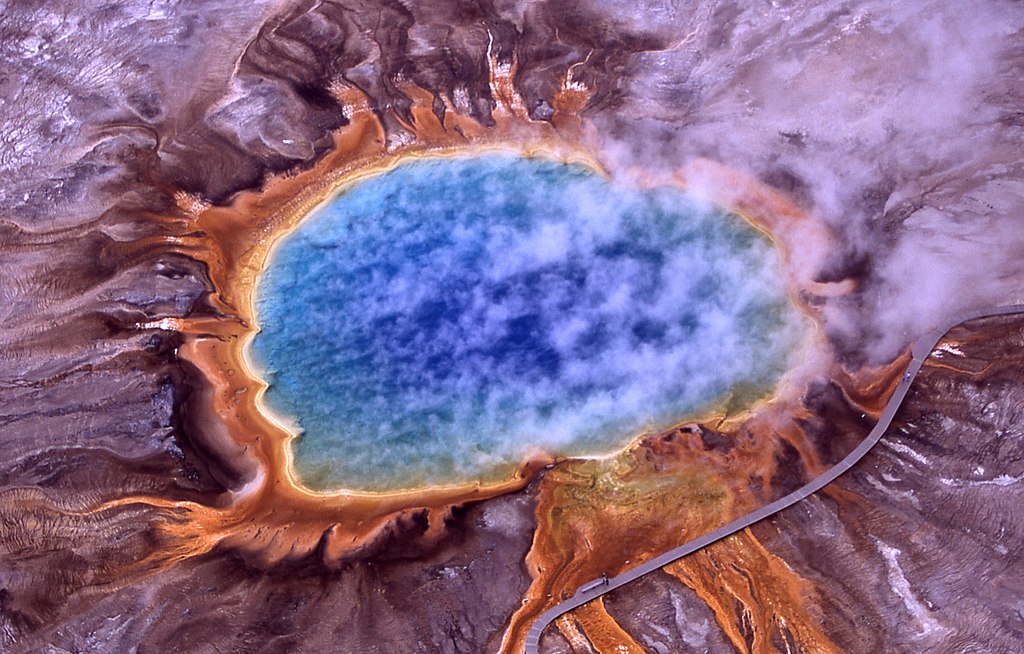 An aerial view of the Grand Prismatic Spring at Yellowstone National Park, the largest hot spring in North America, with an average diameter of 85 meters (275 feet). The spring’s bright colors are caused by bacteria that live in the water. Photograph by National Park Service (Wikimedia Commons; public domain).

The Wyoming Basin is one of many intermontane basins that formed during the uplift of the Rocky Mountains. When the Rockies underwent weathering and erosion, layers of sediment thousands of feet thick were deposited in these basins.

The Wyoming Basin is particularly notable because it contains the Great Divide Basin—a major closed drainage basin, or area of land from which water does not drain into an ocean, but rather is retained and diffuses out by evaporation or seepage. This basin straddles the Continental Divide, and includes the Red Desert, an arid steppe and desert landscape encompassing 24,000 square kilometers (9320 square miles) of south central Wyoming. The desert receives only about 20 centimeters (8 inches) of annual precipitation, and most of its water comes from melting snowpack in the spring. This brief influx of moisture forms standing water that leads to temporary wetlands, intermittent streams, and mud flats in wet years, and which evaporates to form salt pans during drought. The Red Desert also contains the Killpecker Sand Dunes, one of North America’s largest dune fields, spanning 44,110 hectares (109,000 acres) of the Great Divide Basin. 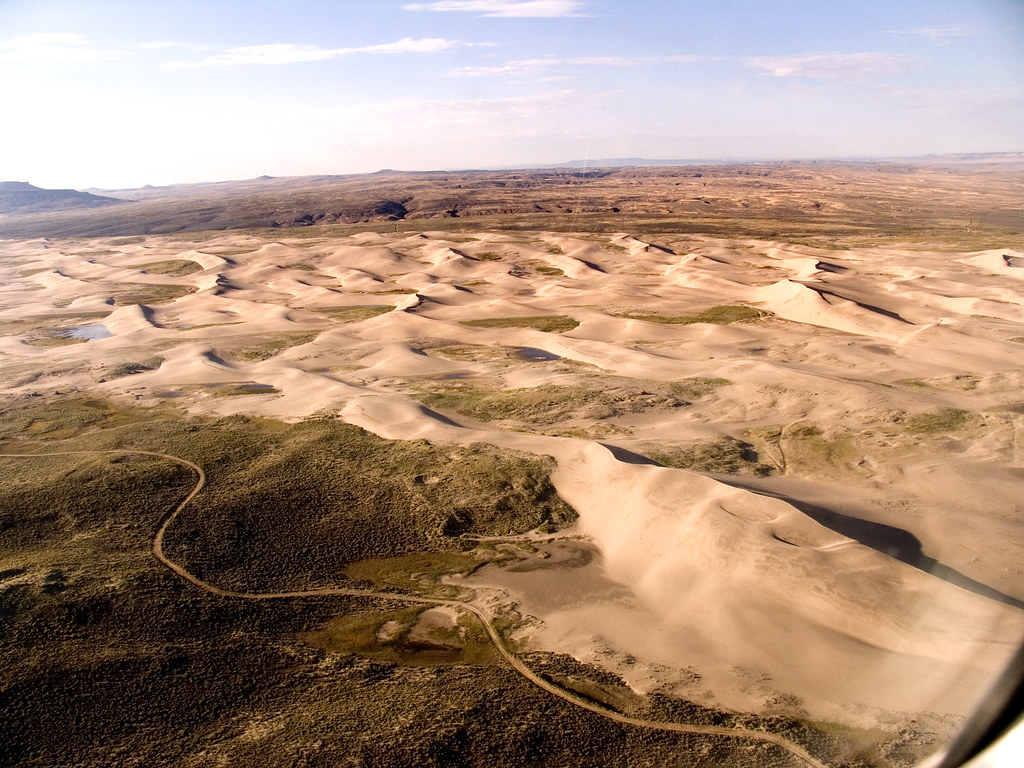 The dunes formed from glacial sediments that collected along the banks of the Big Sandy and Little Sandy rivers to the northeast. Over the past 20,000 years, westerly winds have moved the sand toward its present location.

The bulk of the Southern Rockies are located in Colorado and New Mexico, and only three small prongs extend north into Wyoming, east of the Wyoming Basin. These are the Laramie Mountains, the Medicine Bow Mountains, and the Sierra Madre. All three ranges consist of a core of uplifted Precambrian metamorphic rock flanked by younger sedimentary strata. The Medicine Bow Mountains contain abundant stromatolite remains.