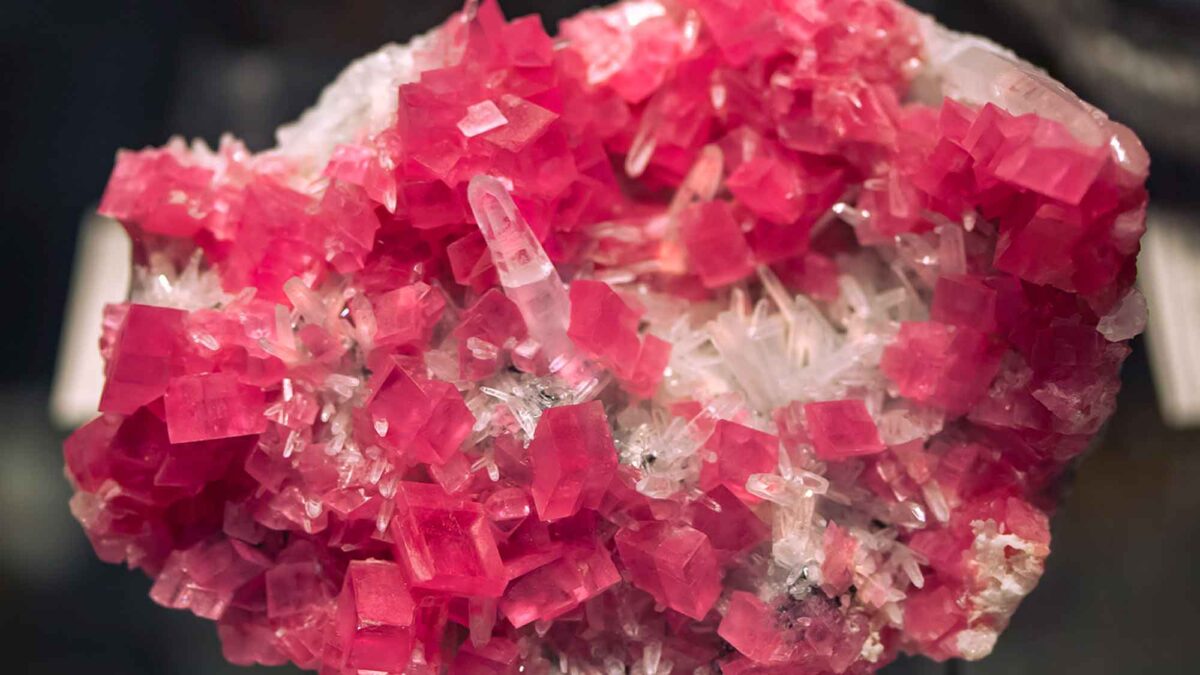 Snapshot: Overview of the mineral resources of the Rocky Mountains region of the southwestern United States.

Image above: Sample of rhodochrosite with associated quartz crystals from the Sweet Home Mine near Alma, Colorado. Photograph by "cobalt123" (Flickr; Creative Commons Attribution-NonCommercial-ShareAlike 2.0 Generic license; image cropped and resized). 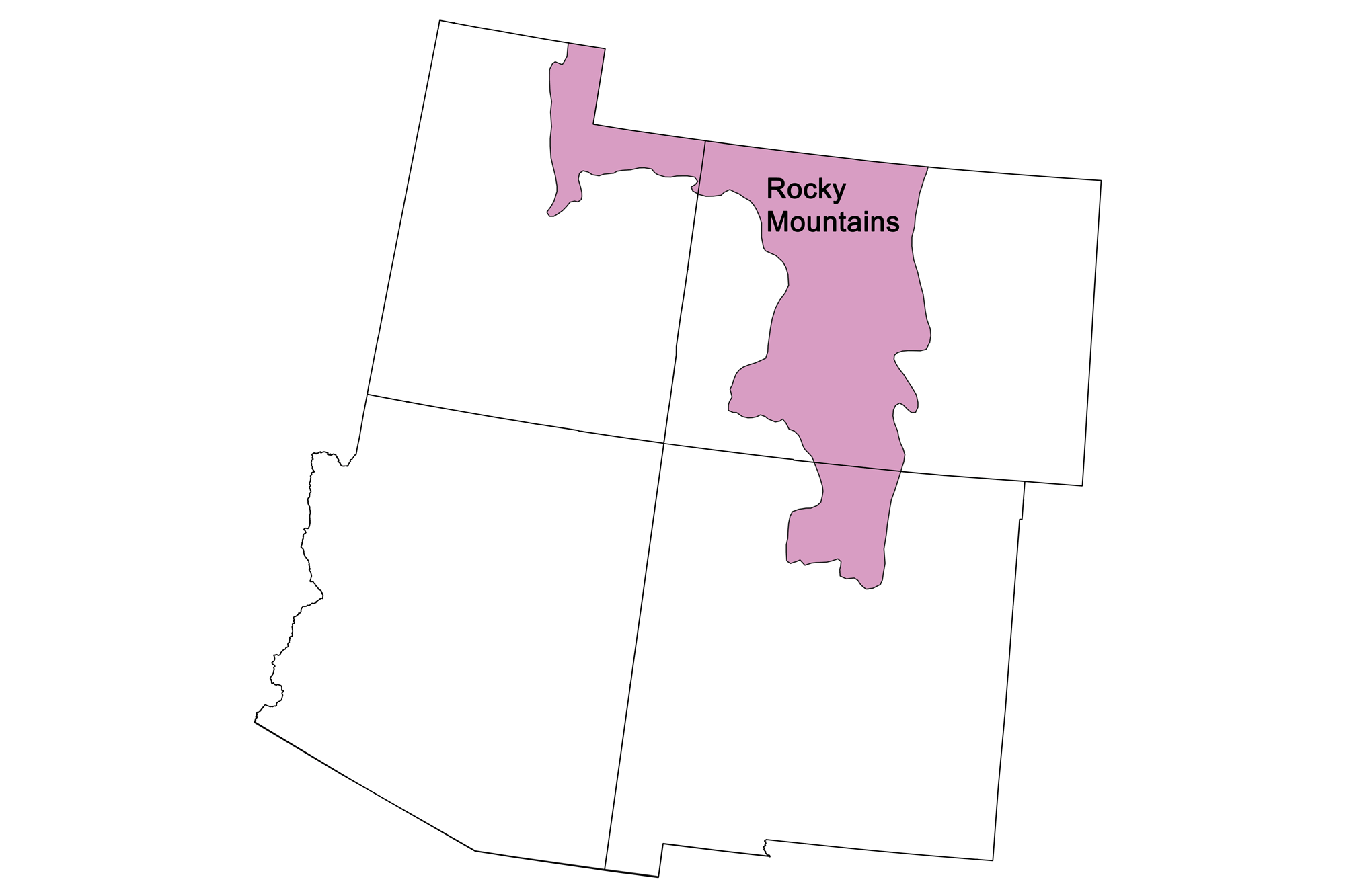 The Rocky Mountains are a discontinuous chain of mountain ranges that extend from northern New Mexico northward into Alberta and British Columbia, Canada. In the Southwestern US, the Southern Rocky Mountains are a formally recognized physiographic division that contains the southernmost extension of these ranges, extending from New Mexico through Colorado and into the southern half of Wyoming. The Southern Rocky Mountains began to rise during the Laramide Orogeny (which peaked about 68 to 65 million years ago). The region is rich in minerals and mining lore, and continues to produce a variety of mineral resources. 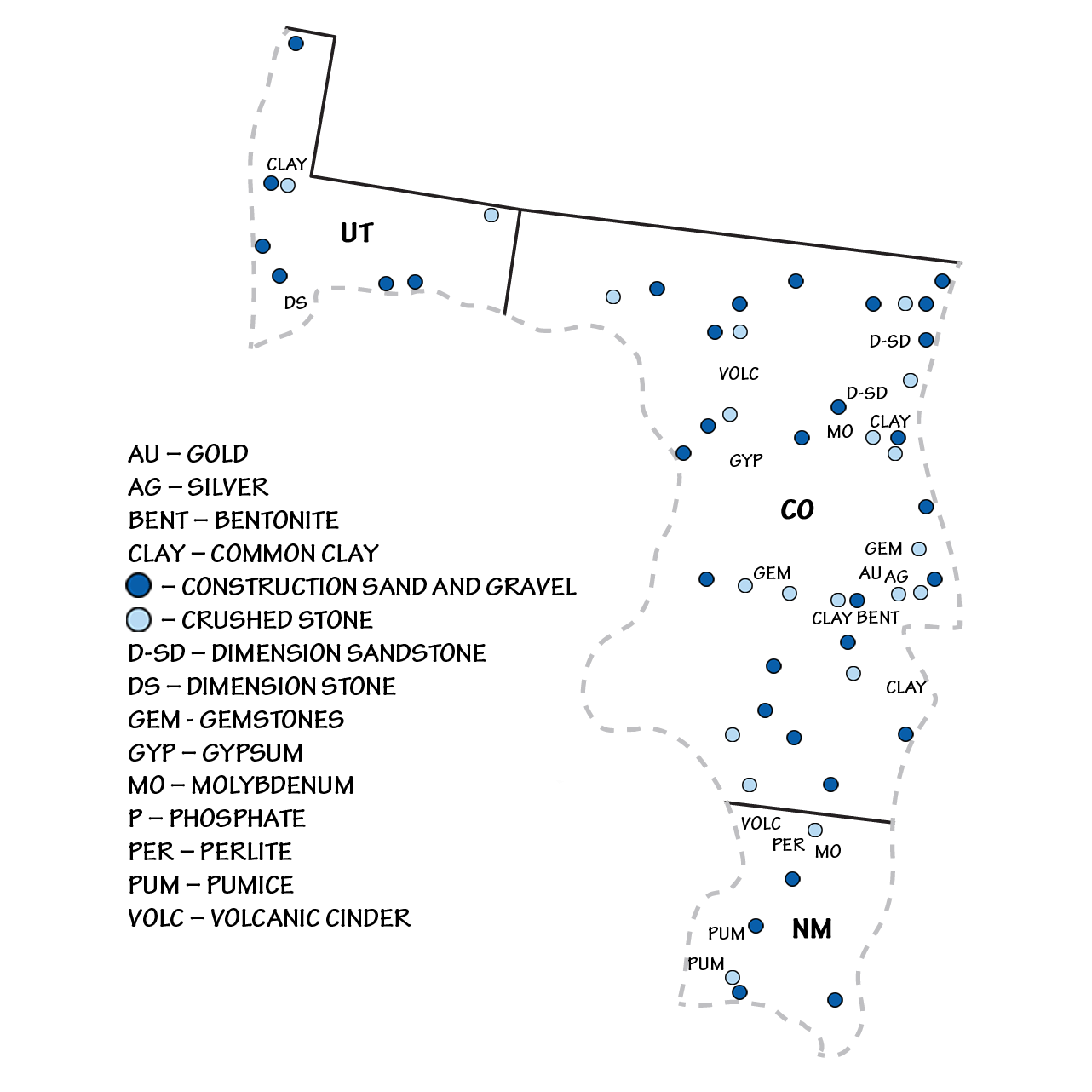 Input your text here! The text element is intended for longform copy that could potentially include multiple paragraphs.

The Rocky Mountains region was one of the earliest areas exploited for minerals during westward expansion across the US. Minerals, especially gold, were known to early Native Americans in this region, and later mined in small amounts by Spanish explorers—perhaps as early as the mid-16th century, and certainly in the 17th and 18th centuries.

The Rocky Mountains saw its greatest development with the advent of the Great Pikes Peak Gold Rush of 1859, when gold and silver were discovered in the mountains just west of Denver, Colorado. With the Gold Rush came the discovery and development of rich mineral resources all along the Colorado Mineral Belt, which trends northeastward from the southwest corner of the state in the La Plata Mountains to the Front Range near Denver before disappearing at a depth of around 4200 meters (13,000 feet) beneath the sedimentary cover of the Denver Basin. 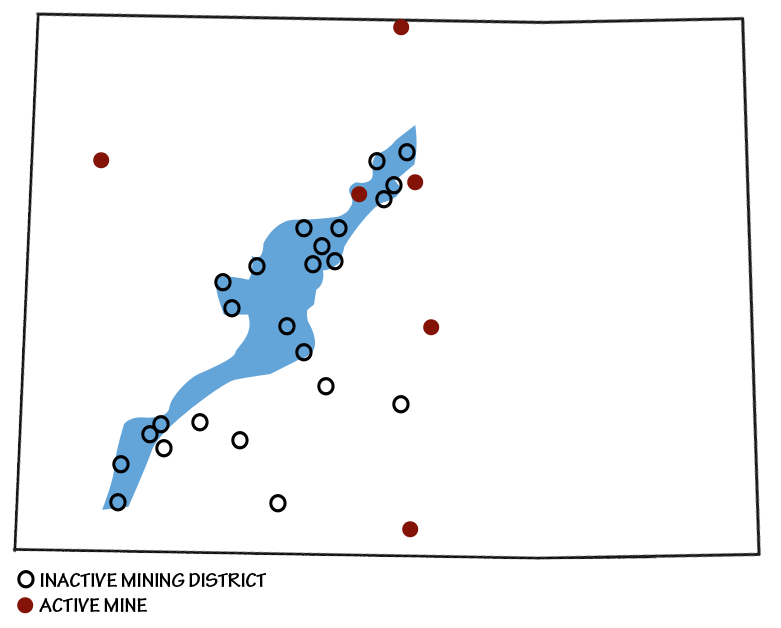 Map of Colorado showing position of the Colorado Mineral Belt and nearby sites of mining activity. Image by Andrielle Swaby, adapted from image by the Colorado Geologic Survey.

The Colorado Mineral Belt generally follows a pre-existing and deep-seated crustal structure or a zone of crustal weakness that is Precambrian in age (about 1.4 billion years old). It lies within an ancient terrane formed by the crustal accretion of central Colorado 1.8 to 1.7 billion years ago. During magmatic events in the Cretaceous and Paleogene, minerals (e.g., gold, silver, and uranium) were carried from deeper Precambrian rocks and deposited as veins and other ore bodies. Abundant quantities of gold, silver, molybdenum, lead, zinc, and other minerals have been found in the Colorado Mineral Belt.

Most of Colorado's major mining districts have been located along the Colorado Mineral Belt, with a major exception being Cripple Creek. 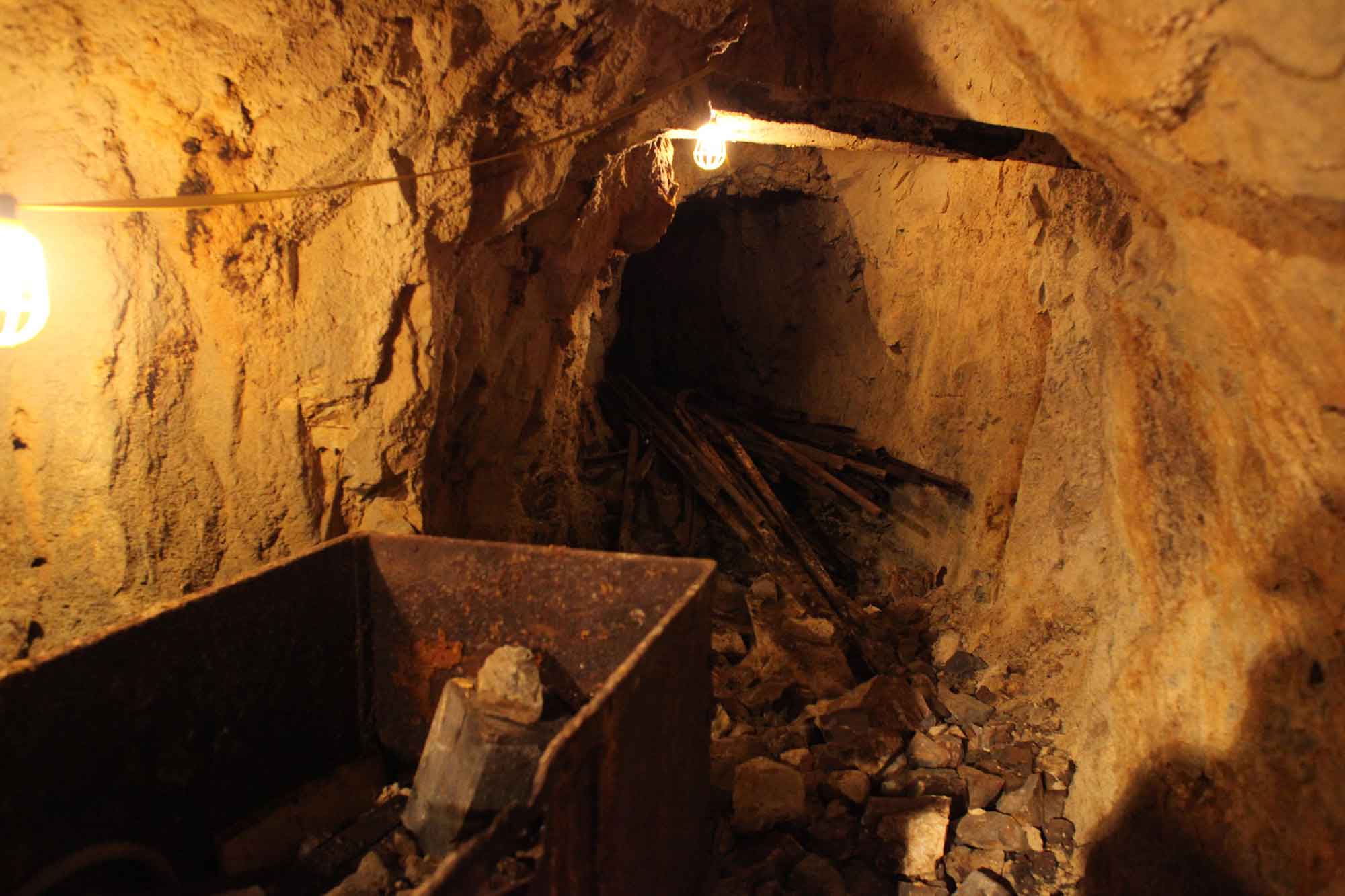 Visitors can tour the underground tunnels of the Mollie Kathleen Gold Mine, a historic vertical shaft mine in Colorado’s Cripple Creek Mining District that descends 300 meters (1000 feet) into the mountain. Many abandoned mining structures and pieces of old equipment are preserved on site, both above and below ground. Photograph by Kelly Michals (Flickr; Creative Commons Attribution-NonCommercial 2.0 Generic license; image resized).

Here, the Newmont Mining Corporation currently produces gold from an open pit mine in the mountains west of Colorado Springs. This mine is the largest producer of gold in Colorado; it was incorporated in 1892, and was maintained as an underground operation until 1995. The surrounding Cripple Creek Mining District is now a National Historic Landmark.

The first discoveries of gold and silver in the Colorado Mineral Belt opened the mining districts of Idaho Springs, Central City, and Georgetown, Colorado. These were followed closely by the opening of the Gold Hill area west of the city of Boulder, Colorado, known for its gold and tungsten deposits. The belt includes the once famous mines of the Leadville area, known for rich silver, gold, and lead ores, and for the eccentric personalities associated with these mines. The story of the legendary Matchless Mine, owned by Horace Tabor and his wife "Baby Doe," inspired the opera The Ballad of Baby Doe. The famed Little Johnny Gold Mine owned by J. J. Brown and his wife, the "Unsinkable" Molly Brown (known for her bravery during the sinking of the RMS Titanic), inspired the musical play and movie of that name. The gold mines of Aspen, Telluride, Ouray, Creede, and Silverton are also located in the Colorado Mineral Belt. Well over 25 million troy ounces of gold (approximately 708 metric tons [780 tons]) have been extracted from the Colorado Mineral Belt to date, along with millions of grams (ounces) of silver, and millions of kilograms (pounds) of lead, zinc, and molybdenum. 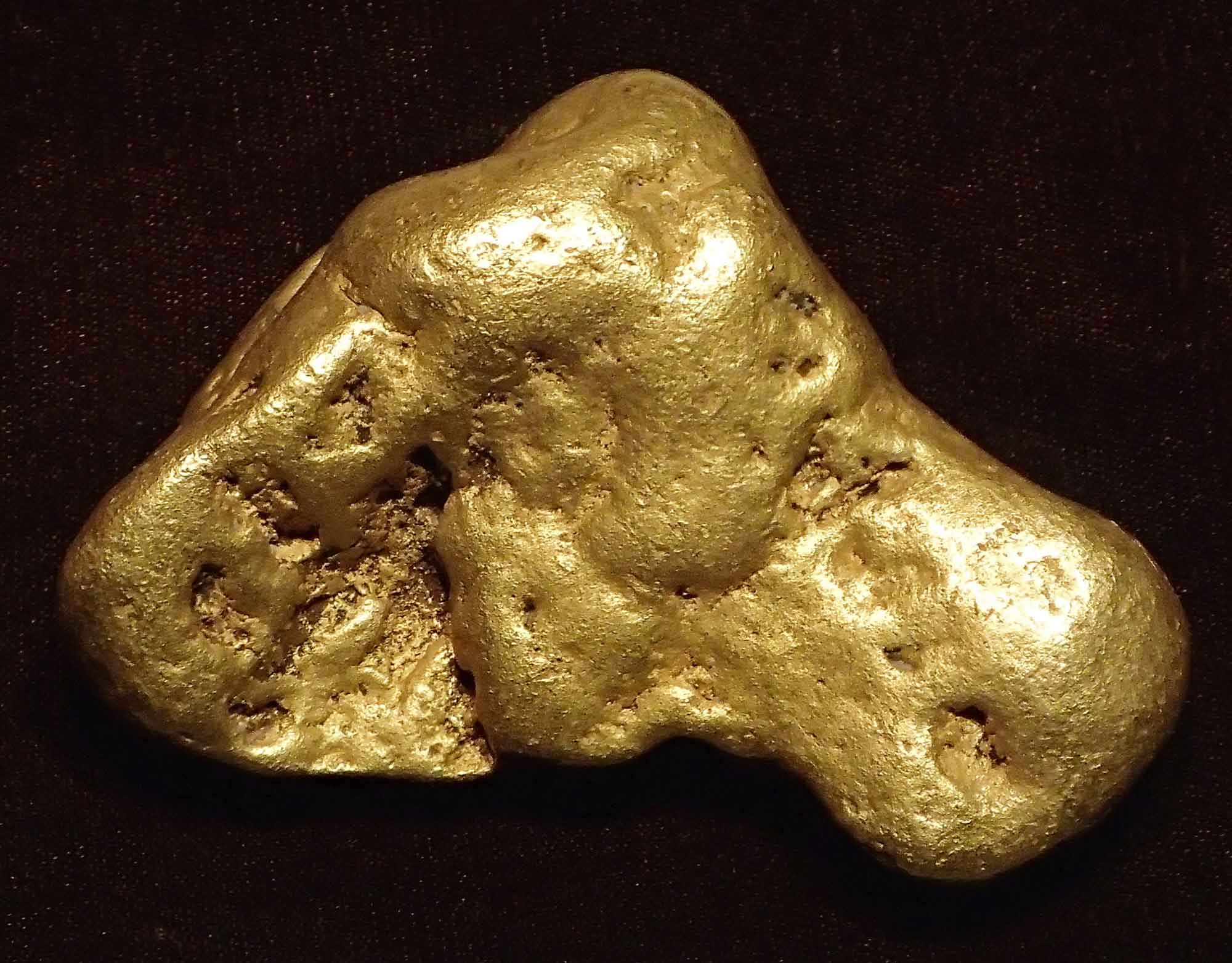 A nugget of placer gold from Pennsylvania Mountain in the Alma Mining District, Park County, Colorado. This is Colorado’s largest known gold nugget, weighing in at 373 grams (12 troy ounces). The specimen is on display at the Denver Museum of Nature and Science. Photograph by James St. John (Flickr; Creative Commons Attribution 2.0 Generic license).

The Climax Mine north of Leadville, Colorado, and the Henderson Mine west of Empire, Colorado, in the northern part of the Rio Grande Rift, contain some of the largest molybdenum ore bodies on Earth. This ore was emplaced between 33 and 24 million years ago, during the Oligocene. The mines extract resources from molybdenum-quartz veins and molybdenum sulfide ore related to certain granites and rhyolite porphyry bodies. The Climax Mine supplied 75% of the world's molybdenum for many years during its period of highest output, and today its ore reserves are estimated at about 227 million kilograms (500 million pounds).

The Colorado Mineral Belt is not the only area of the Rocky Mountains to have hosted large ore mines. Park City, Utah was a site of a major silver rush in the 1860s thanks to the finding of silver, gold, and lead; the town flourished for nearly one hundred years before silver prices dropped in the late 1950s. Park City Mountain and the neighboring Deer Valley are major ski resorts today, but beneath those slopes lie more than 1600 kilometers (1000 miles) of old silver mine workings and tunnels.

In the 1960s and 1970s, diamond-bearing kimberlite diatremes were found in the State Line District of the northern Front Range, Colorado and across the state line in Wyoming. These formations are igneous pipes of ultramafic rock that erupted directly from the mantle at high speeds, bringing diamonds—which form at great depth—up toward the surface. Two of the kimberlite pipes were mined at Kelsey Lake Diamond Mine, the only modern diamond mine in the US during the time of its operation, from 1976 to 2000. Although a few gem-quality diamonds have been recovered, including one weighing 28.3 carats (about half the size of the massive 46-carat Hope Diamond now in the Smithsonian's gem collection), the Colorado-Wyoming diatremes have thus far not been commercially successful.

The Sweet Home Mine near Alma, Colorado was originally founded as a silver mine, but is now a world-famous locality for the collection of high-quality rhodochrosite crystals, and has produced the world's largest known specimen (14 x 16.5 centimeters [5.5 x 6.5 inches]).

Rhodochrosite by Benoît Rogez on Sketchfab

Industrial stone and construction materials are mined throughout the Rocky Mountains. Crushed granite, quartzite, and rhyolite, along with rounded gravel from rivers, are quarried for landscaping, paving base material, and drainage applications. Sand and gravel aggregate is collected from glacial and alluvial deposits throughout the Rocky Mountains, and is used as ice control for highways, for filtration purposes, and to aid in the manufacture of concrete, asphalt, and other construction projects. The region is also home to the white Yule Marble, used to construct the Lincoln Memorial in Washington DC and the Tomb of the Unknown Soldier at Arlington National Cemetery. The primary quarry for this stone is located at Marble, Colorado, where Mississippian limestones underwent contact metamorphism from the heat of an adjacent Cenozoic igneous intrusion. 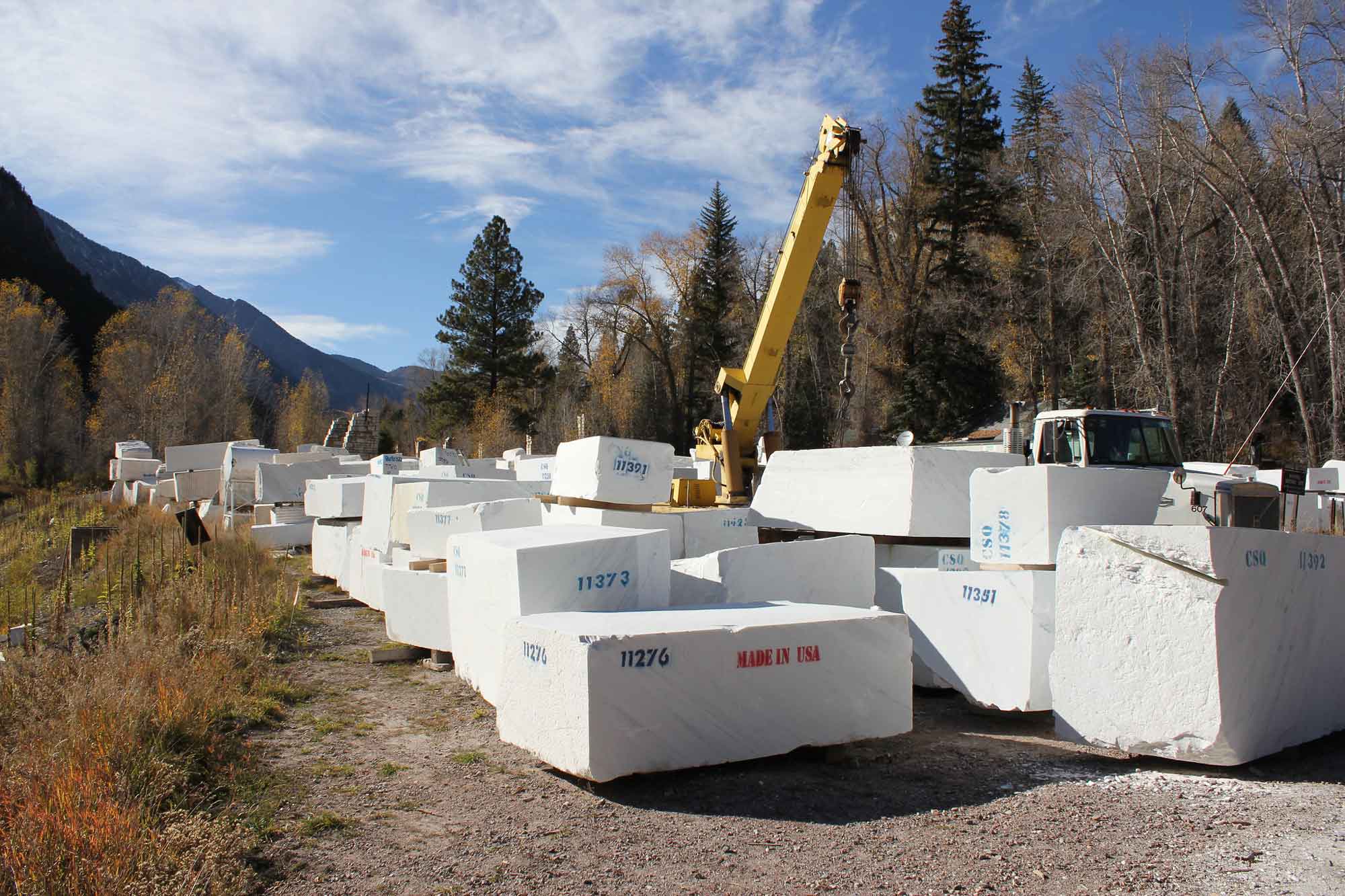 Volcanic materials contribute to an important mining industry in north-central New Mexico. Perlite, a rapidly cooled volcanic glass with high silica content, is used in horticulture, water filters, lime, and cement, as well as in construction-related materials such as ceiling tiles and insulation boards. New Mexico produces the most perlite of any US state, and it is quarried in the No Agua Peaks of Taos County as well as a few other locations with more moderate yields. In addition, pumice and volcanic cinders are quarried in the Rocky Mountains of New Mexico. These deposits are notable for having a lower density and higher porosity than most other rocks; this makes them commercially valuable for use as a lightweight yet strong construction material.