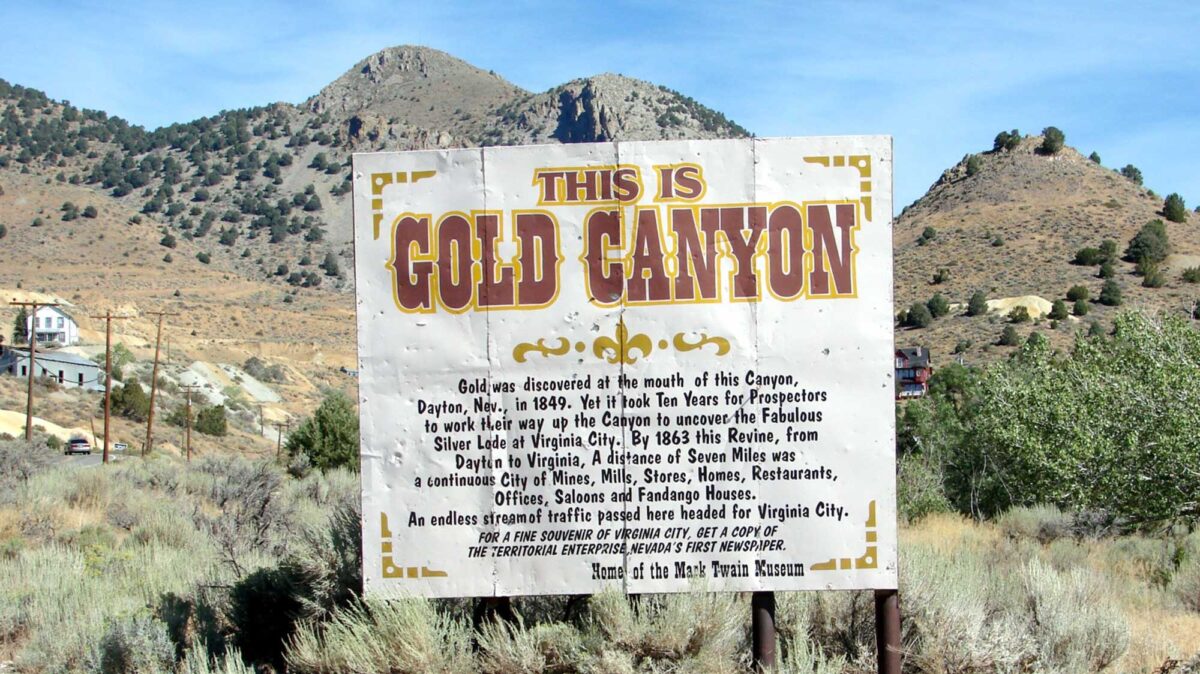 Snapshot: Overview of the mineral resources of the Basin and Range region of the western United States. 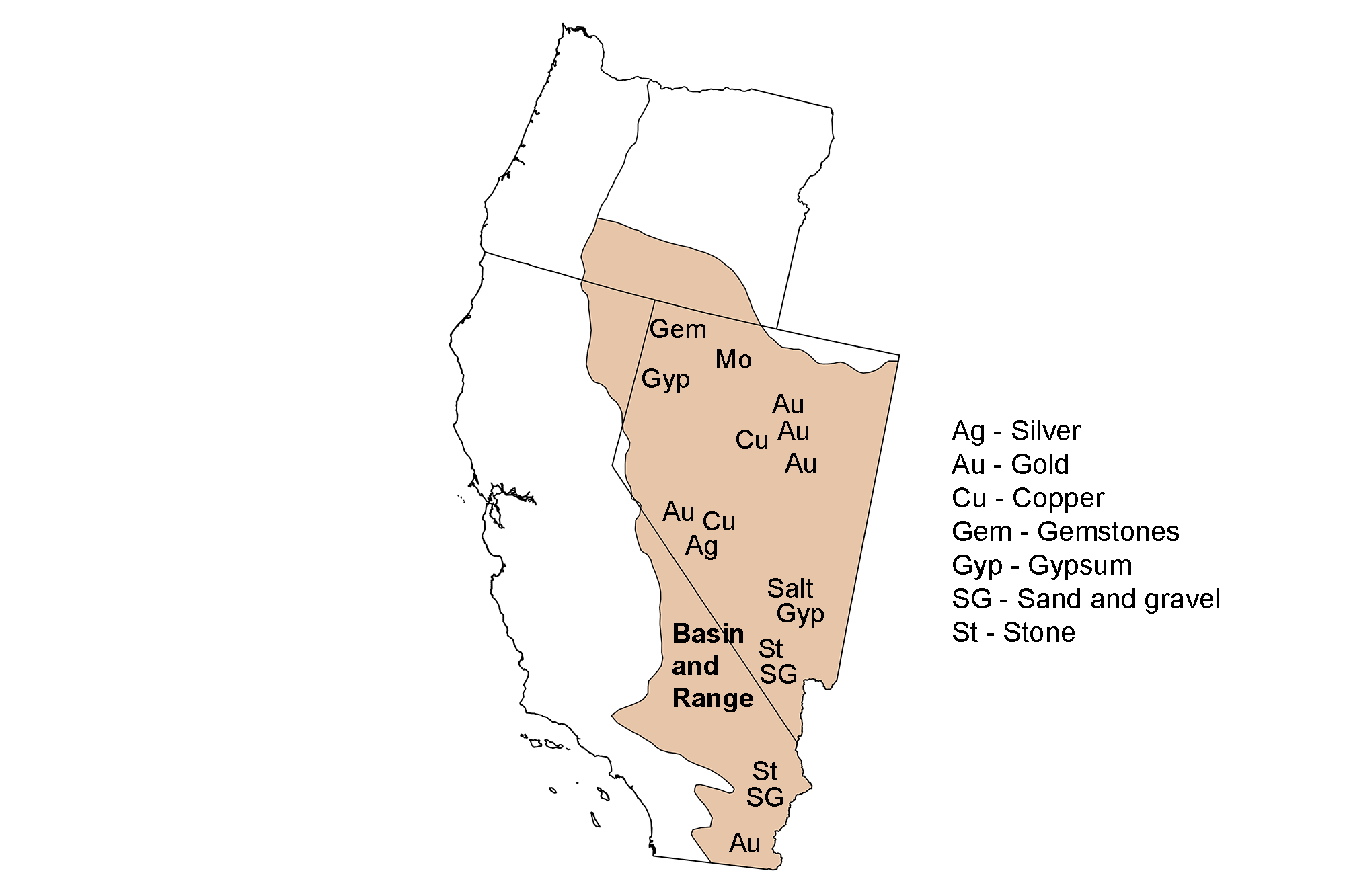 Locations of major types of mineral resources in the Basin and Range region of the western United States.

The Basin and Range region covers most of Nevada, some parts of eastern California, and a small part of southeastern Oregon. This province is defined by an alternating pattern of north-south trending faults and mountains with valleys in between. The Basin and Range, with its dry mountains and valleys, was initially seen as a barrier for those trying to reach the California gold fields. The little precipitation that does occur there quickly evaporates, flowing into short-lived lakes on the valley floors or sinking into the ground to become groundwater.

These climate patterns have created abundant evaporite minerals such as salt; the geologic history of the region has also created the opportunity for large-scale mining of metallic minerals such as gold and silver, as well as of industrial materials, such as sand and gypsum (see map above).

The primary metallic minerals mined in the Great Basin are gold and silver. 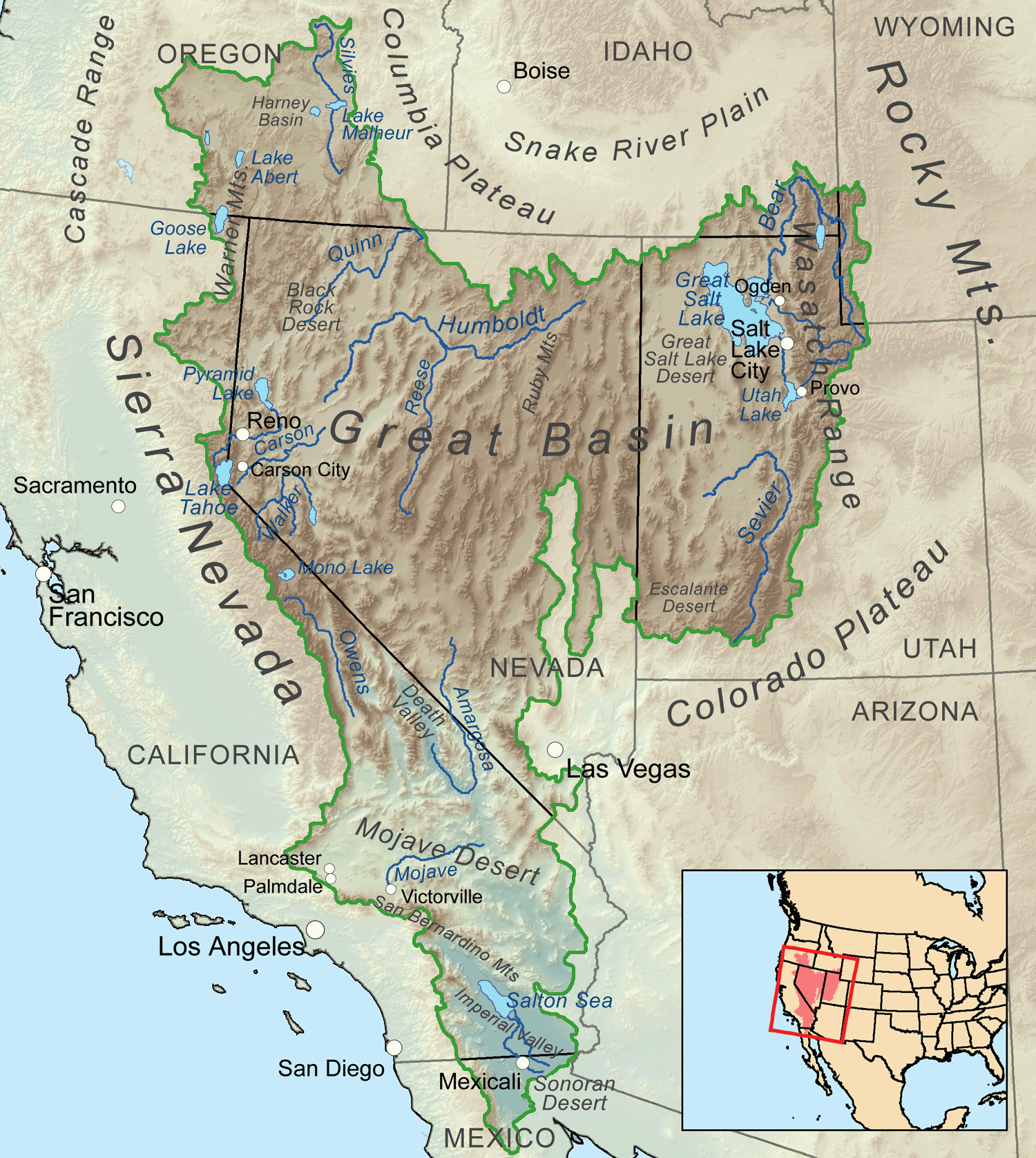 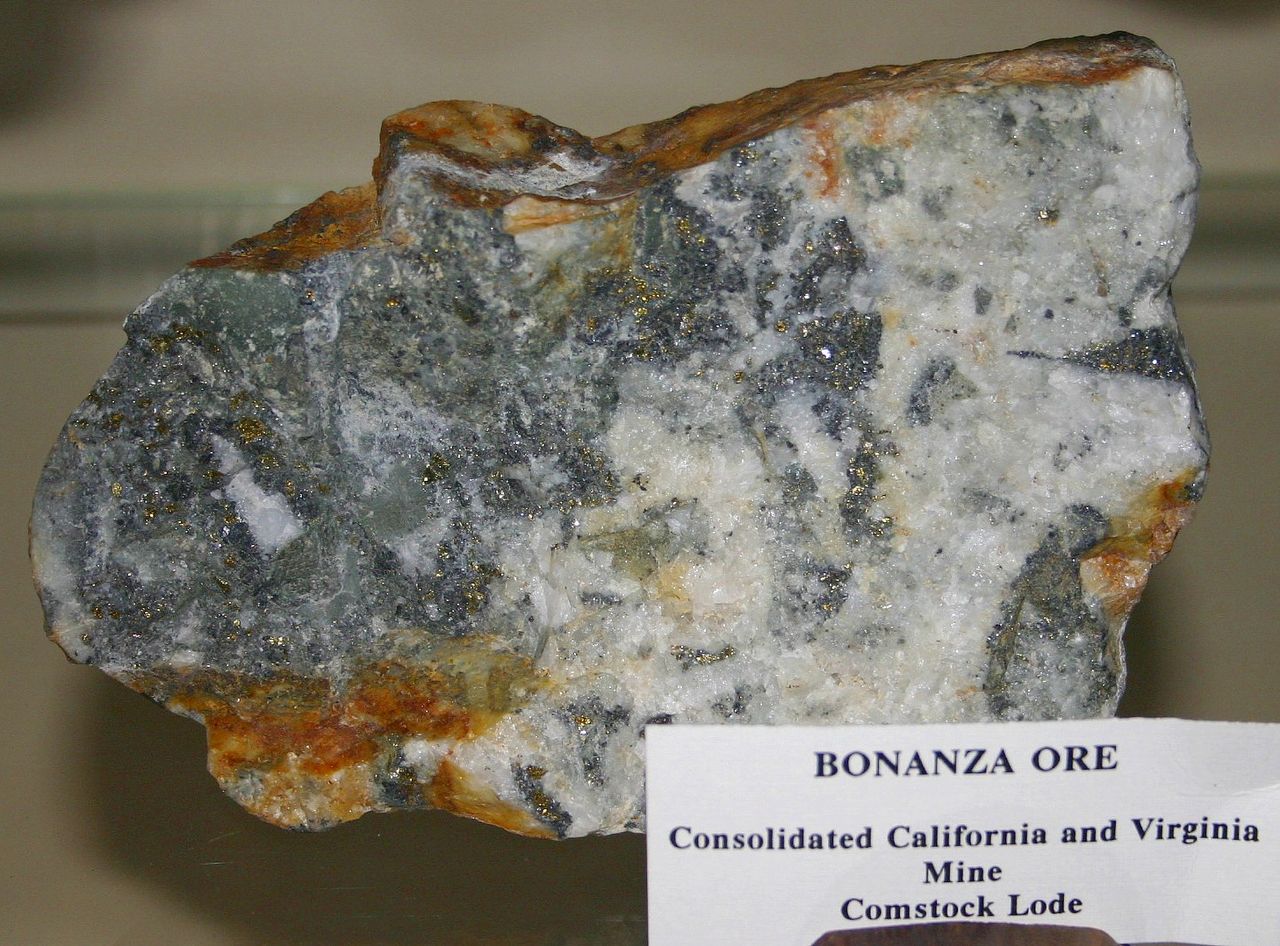 In 1849, Mormon prospectors found placer gold in streams leading into the Carson River. However, these prospectors were on their way west to California, so it wasn’t until 1859, with the discovery of silver in Nevada’s Comstock Lode, that mining began in earnest. The mining boom brought prospectors who worked the mines, settlers who started farms and ranches to feed the miners, and shopkeepers who kept them supplied. Between 1860 and 1880, the Comstock District produced more than six million tons of ore. 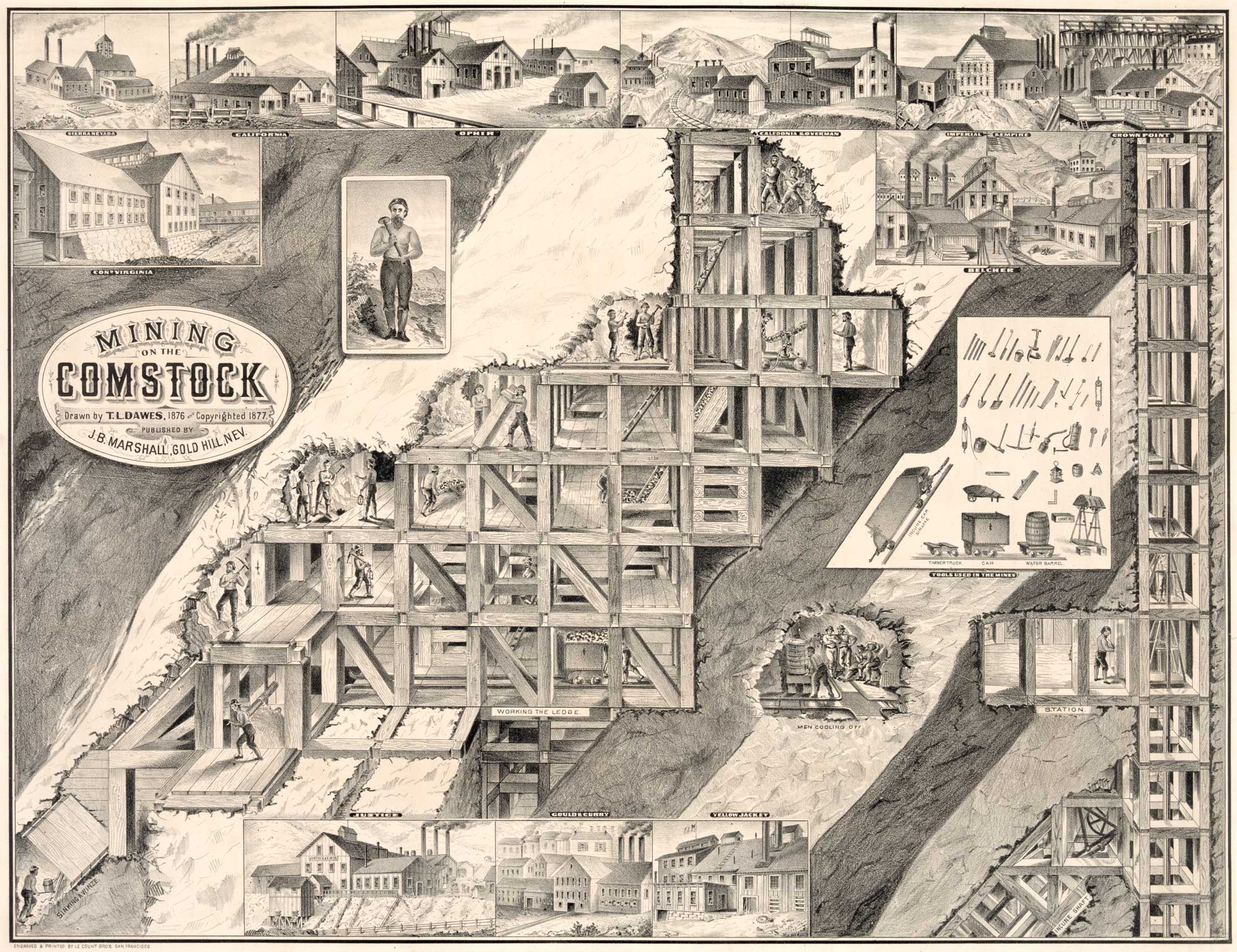 Gold mining in the Great Basin produces 79% of the gold in the United States today.

Gold can be extracted using a wide variety of methods. Placer mining searches stream bed deposits for minerals moved from their original source by water. Placer deposits can be mined in several different ways: panning, which uses a small, hand-held pan to manually sort the gold from sand and rock fragments, sluicing, in which water is sent through a man-made stepped channel that traps particles of gold, or dredging, where a large machine uses mechanical conveyors or suction to pull loads of material from the river bottom and then dump smaller fragments into a sluice box. Gold that is trapped in layers of rock may be excavated through underground mining, where tunnels or shafts are used to locate the ore, or by open pit mining, which is used when deposits are relatively close to the surface. Low-grade gold deposits are more expensive to mine, as much more rock must be processed to extract a useful quantity of gold. Typically, precious metals are extracted from such deposits by using cyanide to leach them from crushed rock. This method is very slow, taking as long as two years to extract only 50% of the desired mineral.

The Carlin Unconformity in Eureka and Elko Counties, Nevada, is one of the several sedimentary rock-hosted gold regions in the Great Basin. The Unconformity is associated with a period of collision between a terrane and the North American plate about 350 million years ago, generating higher crustal temperatures and pressures and producing numerous hot springs. The hot springs acted as hydrothermal solutions, precipitating gold from the bedrock. The belt of gold mineralization is found primarily in material from the late Eocene (∼36–40 million years ago). Originally, placer deposits were found, but in 1960 mining began on a large scale in both open pit and underground mines. 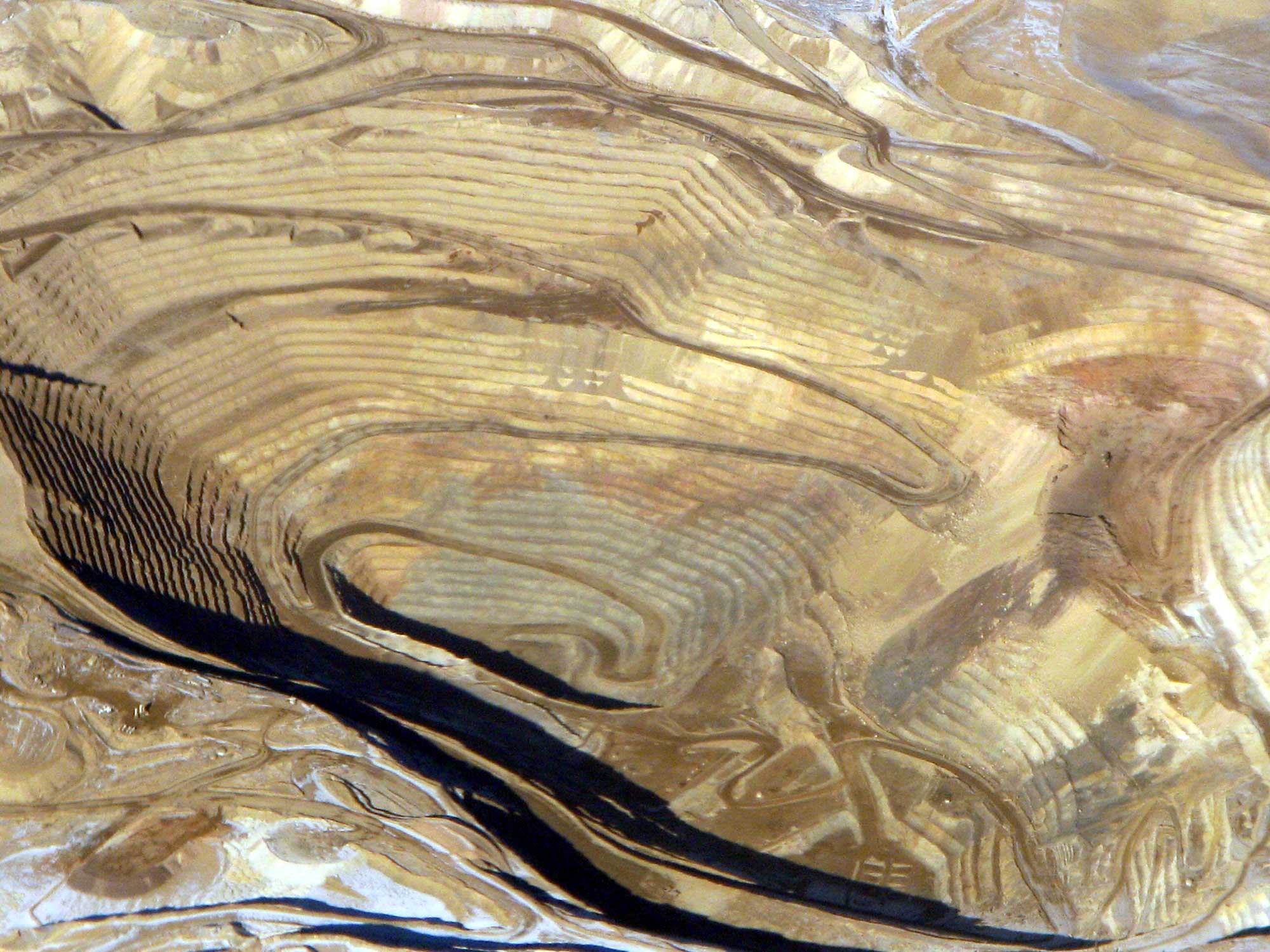 An aerial view of Round Mountain gold mine, an open pit mine in Nye County, Nevada. Round Mountain existed as an underground mine beginning in 1906, eventually being converted to an open pit sixty years later. The pit is about 2500 meters (9200 feet) wide and 1493 meters (4900 feet) deep. Photograph by Patrick Huber (Wikimedia Commons; Creative Commons Attribution-Share Alike 2.0 Generic license).

Slightly south of the Carlin Unconformity is the Battle Mountain-Eureka Trend (here “trend” refers to an alignment of deposits), which has a similar geologic structure. Historically, mines in the area produced significant amounts of silver as well as gold.

Copper has been mined in several areas of the Great Basin. It is usually extracted in association with the other metals, like gold and silver. In White Pine County, Nevada, ore bodies produced by hydrothermal processes are being mined. The deposits are lowgrade and include gold and silver as secondary products.

In the northwest corner of the Basin and Range there are several mines that produce opals, which are used as gemstones. 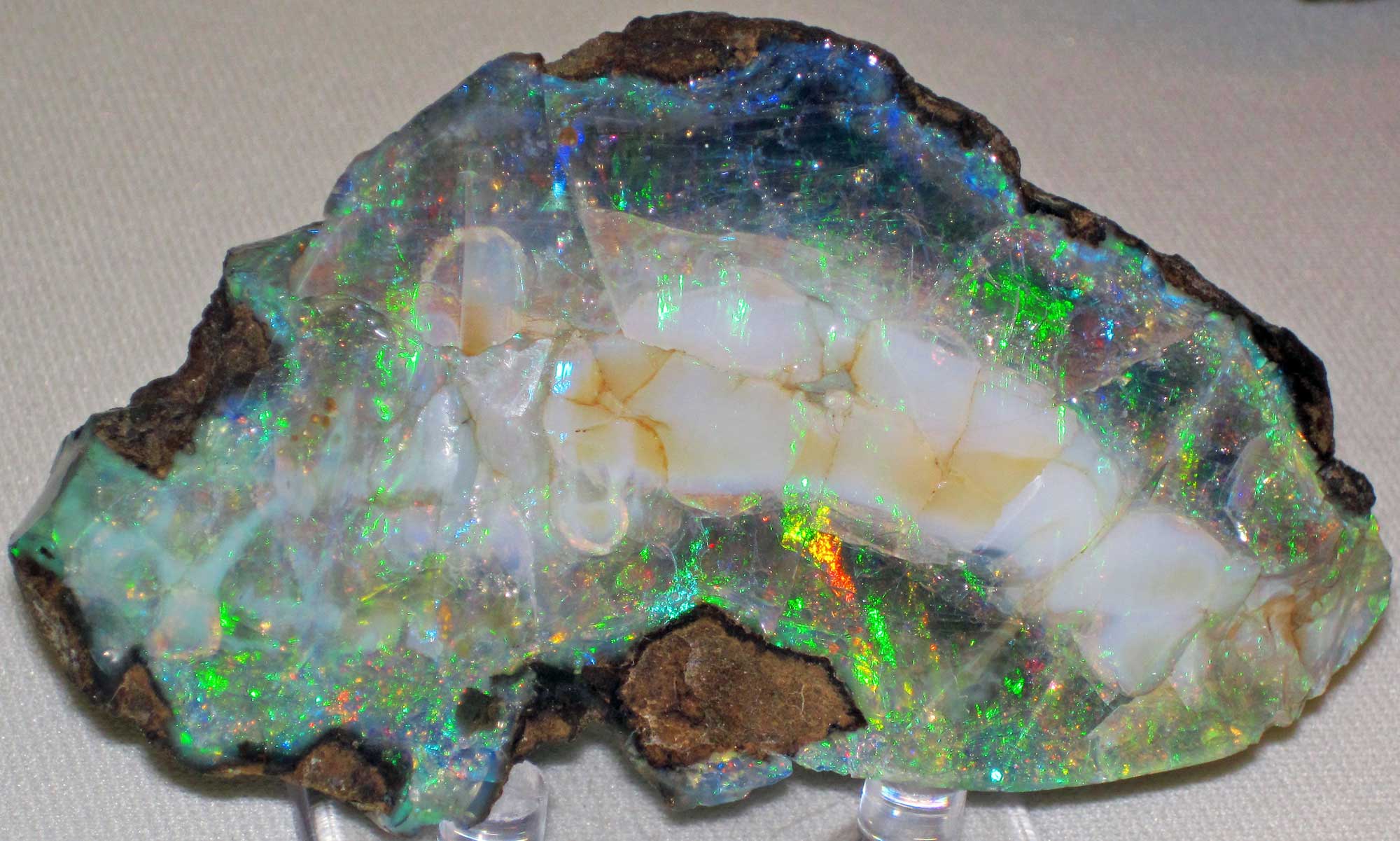 Opal is silica that lacks a crystalline structure, so it is not technically a mineral. These opal deposits formed over a period of 16 million years, in the silica-rich water of a wet, lush basin. The basin’s forests were periodically buried under layers of volcanic ash and debris from pyroclastic flows. Over time, hot groundwater picked up silica-rich deposits that slowly replaced the carbon molecules in the buried trees. When the area was uplifted during the formation of the Basin and Range, erosion exposed the opal deposits.

In many places, salt deposits have formed where land-locked lakes evaporated. Because these playas capture all the salt and saline compounds that are washed out of the surrounding mountains, the deposits have become quite thick (and commercially viable). They are currently mined in southern Nevada and the southeast part of California. Gypsum also forms as an evaporite, and is found in similar settings.