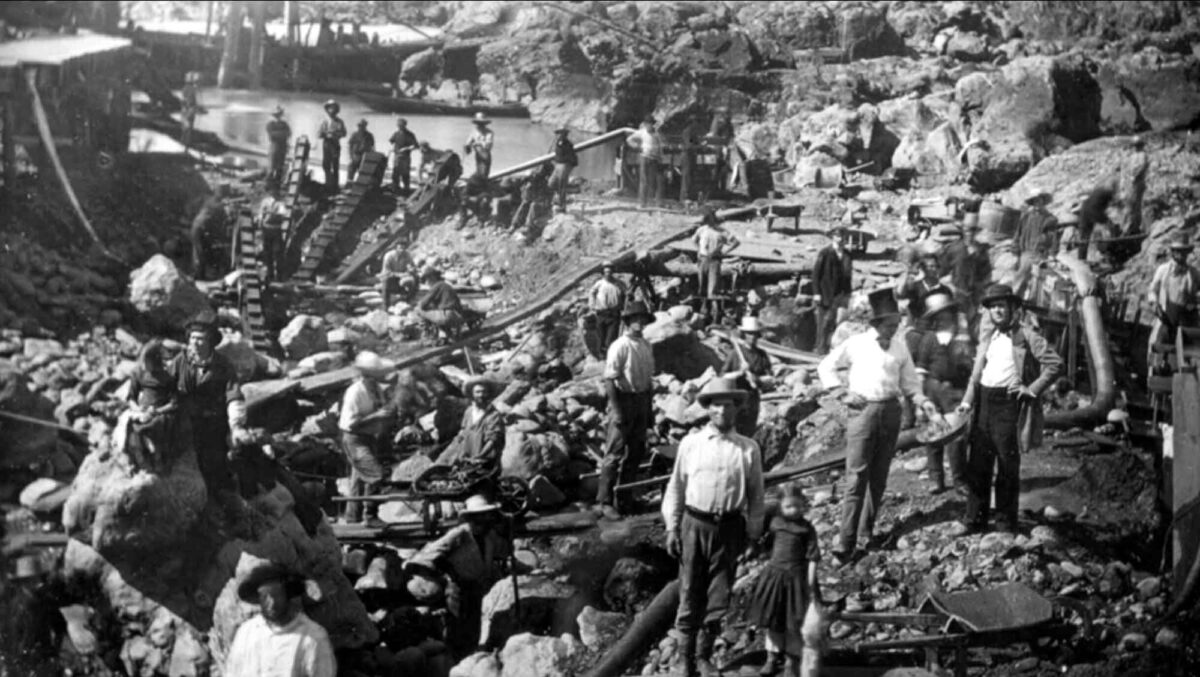 Snapshot: Overview of the mineral resources of the Cascade-Sierra Mountains region of the western United States.

Image above: Gold miners on the American River near Sacramento, California, circa 1852. 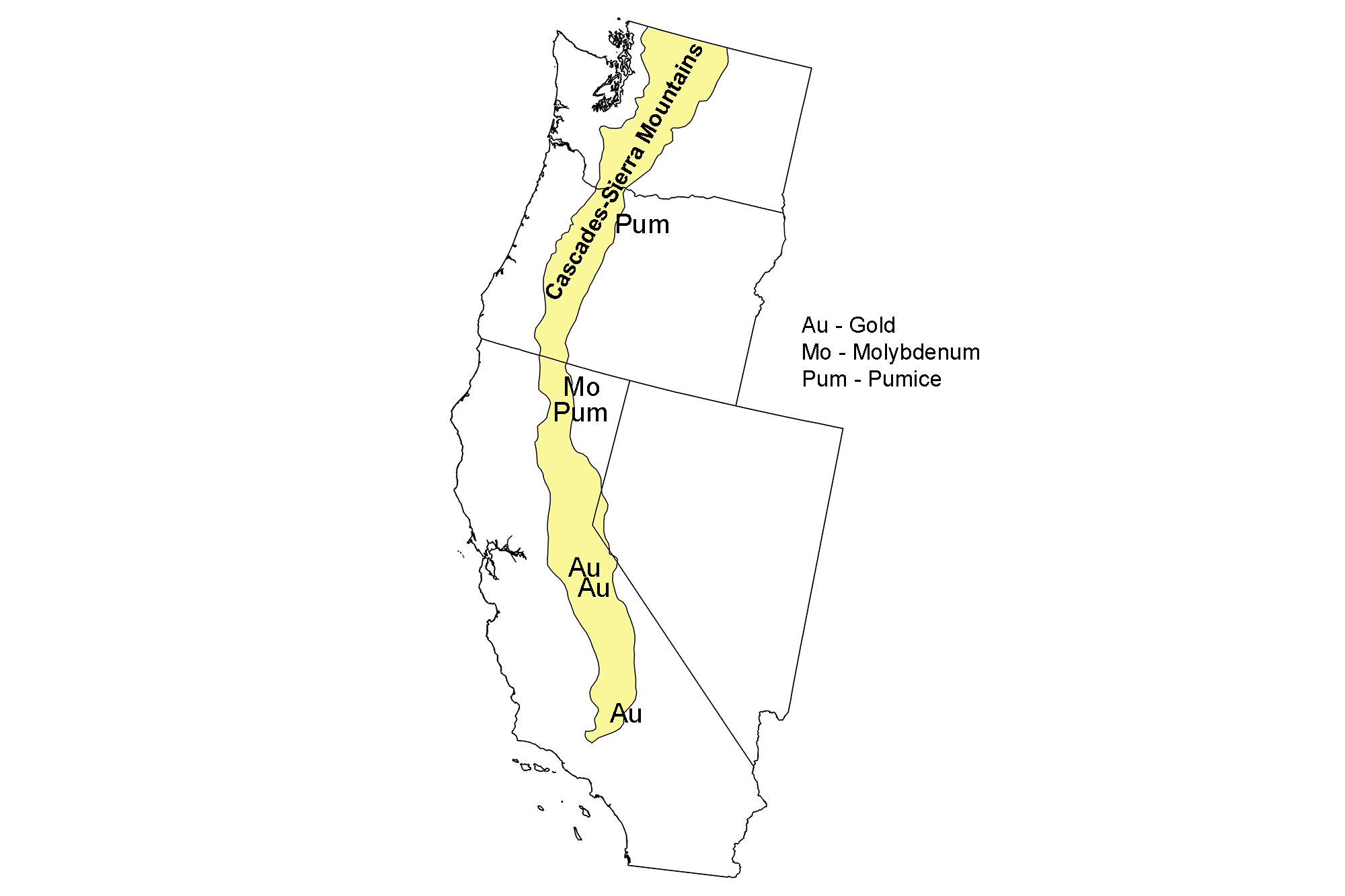 Map showing locations of mineral resources in the Cascade-Sierra Mountains of the western United States.

The Cascade-Sierra Mountains form a nearly uninterrupted barrier along the western edge of the United States. Interestingly, these two ranges have very little in common. The Sierra Nevada are composed of granitic intrusions (plutons) that once formed the molten core of an arc-shaped chain of volcanoes during the Mesozoic. Erosion wore away the volcanoes, leaving the granite exposed. 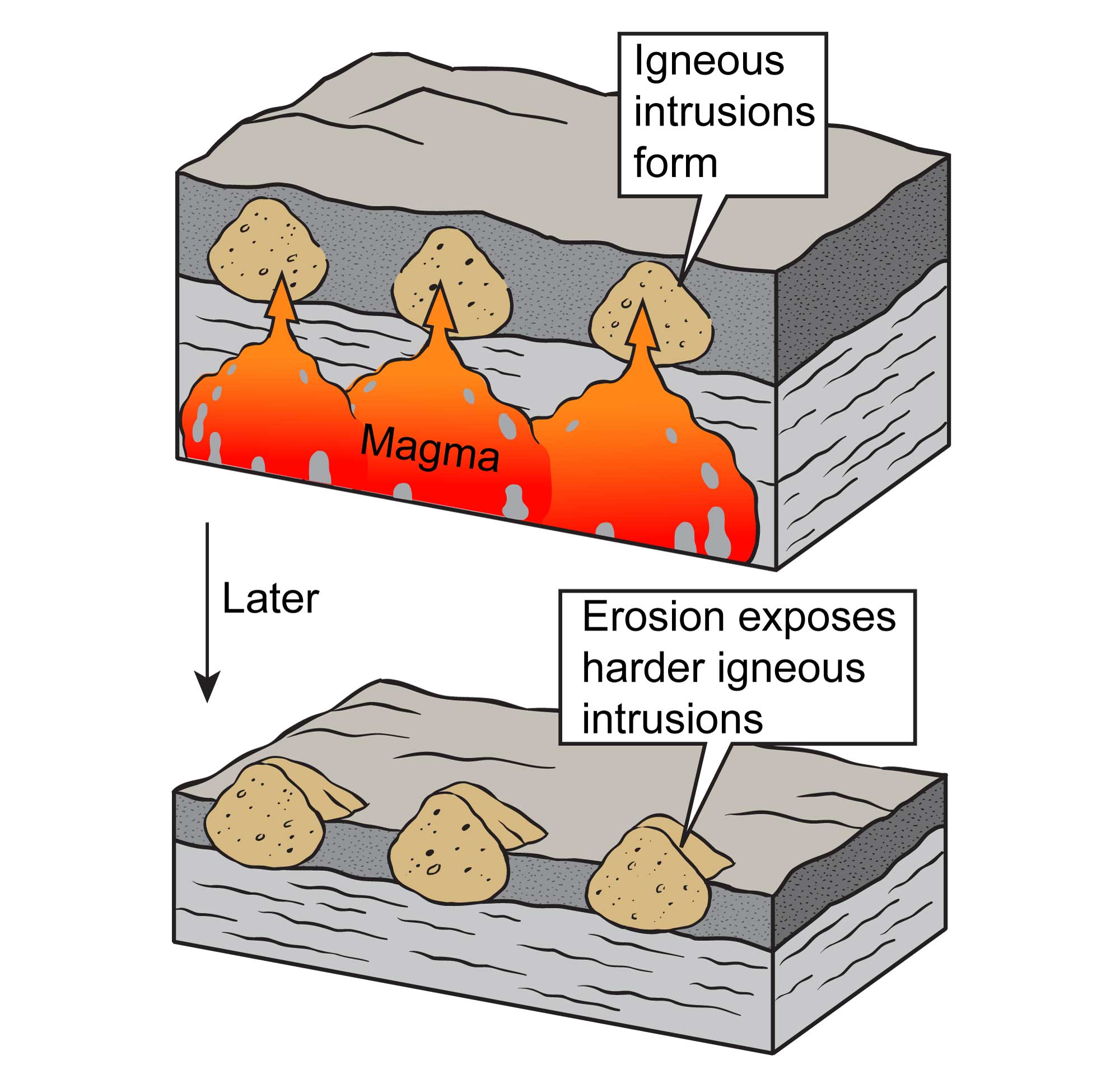 Igneous intrusions form when cooling magma is trapped beneath the surface. These rocks, which are more resistant than the surrounding material, can later be exposed at the surface through the process of erosion. Original image by Jim Houghton, modified for the [email protected] project.

Then, less than five million years ago, these granitic blocks began to rise along their eastern edge, tilting to the west in the process. The modern Sierra, as a result, have a gently sloping west side and a very steep east side. The Sierra are all that remains of an ancient volcanic arc, but the Cascades form an active volcanic arc that stretches from British Columbia to northern California. Thirteen major volcanic centers are strung along this arc. Between these large volcanoes lie thousands of short-lived volcanoes. In the North Cascades, the geologic picture is more complicated, as modern volcanoes are superimposed on a series of accreted terranes.

Gold formation in the Sierra Nevada occurred within saturated sediments. Hydrothermal fluids were heated at depth, causing them to rise through the overlying rock. The fluids cooled as they rose to the surface, concentrating metals like gold. This gold, in the foothills of the western Sierra Nevada, was the source of the California Gold Rush of 1848–1849. The initial find at a mill on Sutter’s Creek led to thousands of prospectors arriving from around the world in hopes of striking it rich. Eventually, the gold that was relatively easy to find was depleted, and miners either moved on to other gold fi elds or began looking for less convenient gold sources.

Gold is still mined in the Sierra Nevada today, but on a much smaller scale. In California’s Amador, El Dorado, Placer, and Nevada counties, there are several small operations that employ 20 or fewer employees. In addition, there are several designer mines that make jewelry out of gold-intruded quartz. 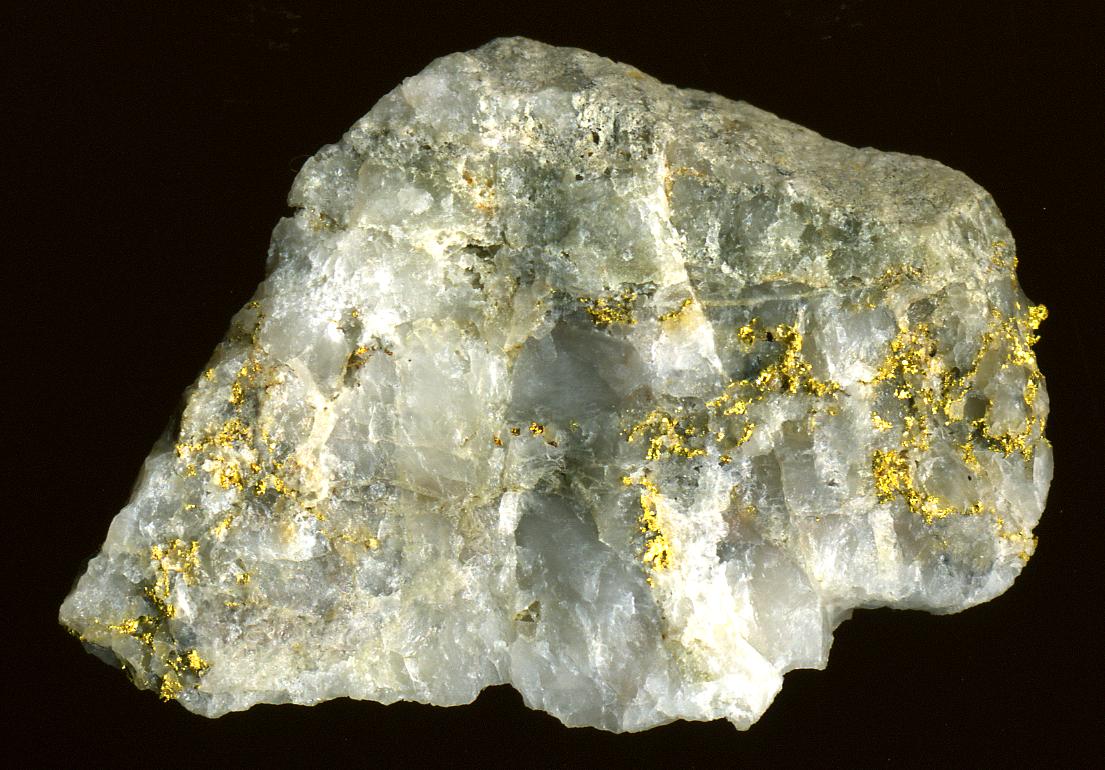 A sample from a quartz-gold vein mined near the Harvard Open Pit Mine in the Sierra Nevada foothills, California. Photograph by James St. John (Flickr; Creative Commons Attribution 2.0 Generic license).

The quartz is cut and polished so the gold veining shows.

In the southern Cascades, in and around Jackson County, Oregon, a number of small gold mines were developed after the 1850s. Many of these were placer claims that brought in dredges to move and process larger amounts of material from the riverbeds. Most of these claims were abandoned by the 1920s. Today, small placer claims are still worked along the rivers and streams that flow from the Cascades to the Pacific Ocean.

In the northern Cascades, silver, copper, and gold mining was a prominent industry in the late 19th and early 20th centuries. One of the largest copper mines in the country, the Howe Sound Holden Mine in Holden, Washington, produced $66 million worth of ore before it was shut down in the 1950s as mineral prices dropped. Today, the US Forest Service and Rio Tinto mining group are engaged in a multi-million-dollar project to remediate environmental problems at the Holden Mine area, including the disposal of old mining waste and dismantling the old buildings. 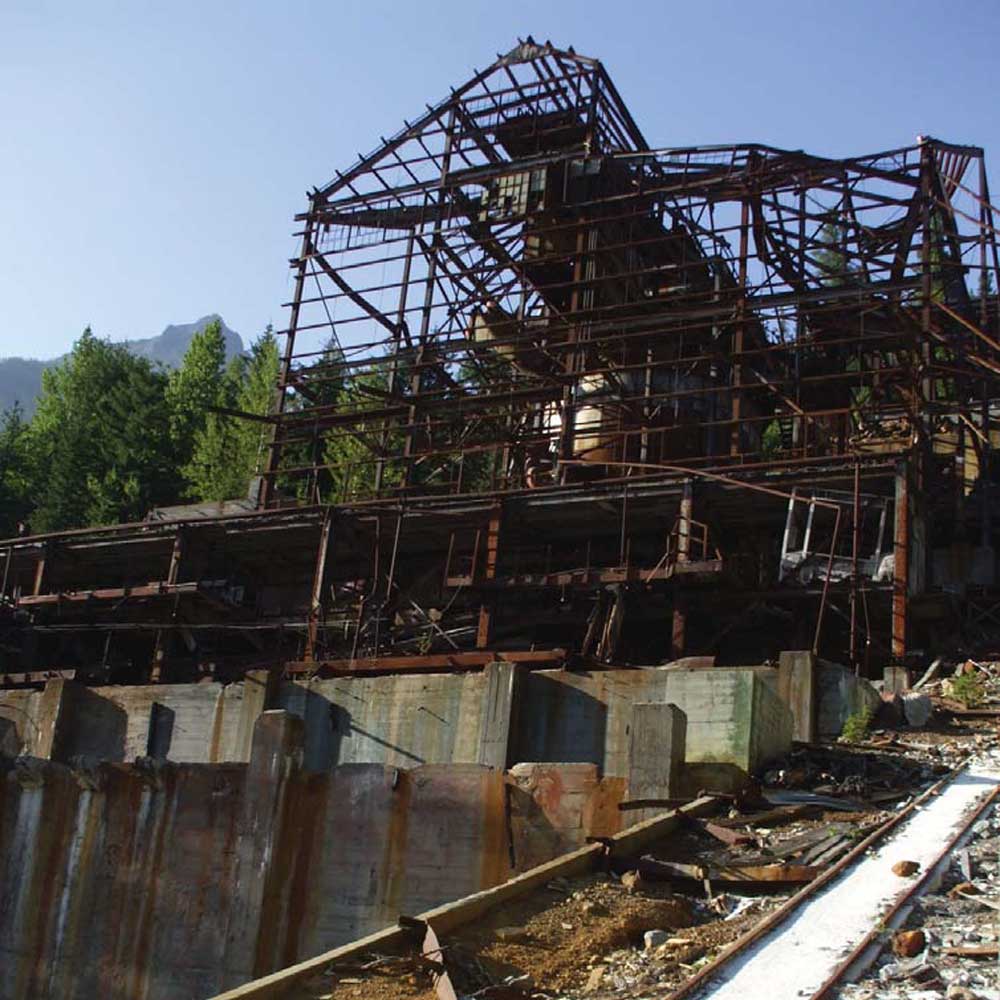 The skeleton of an old mill building at the Holden Mine site. Photograph by the U.S. Forest Service (public domain).

Other metals, including silver and zinc, have been found throughout the Sierra Nevada and Cascade Range, but not in quantities that currently make them commercially viable.

In the Sierra Nevada and Cascade Range, gravel, stone, and sand are quarried for use in building roads, houses, and other infrastructure. In addition, pumice and volcanic cinders are quarried in the volcanic southern Cascade Range. These deposits are notable for having a lower density and higher porosity than most other rocks; this makes them commercially valuable for use as a lightweight yet strong construction material. 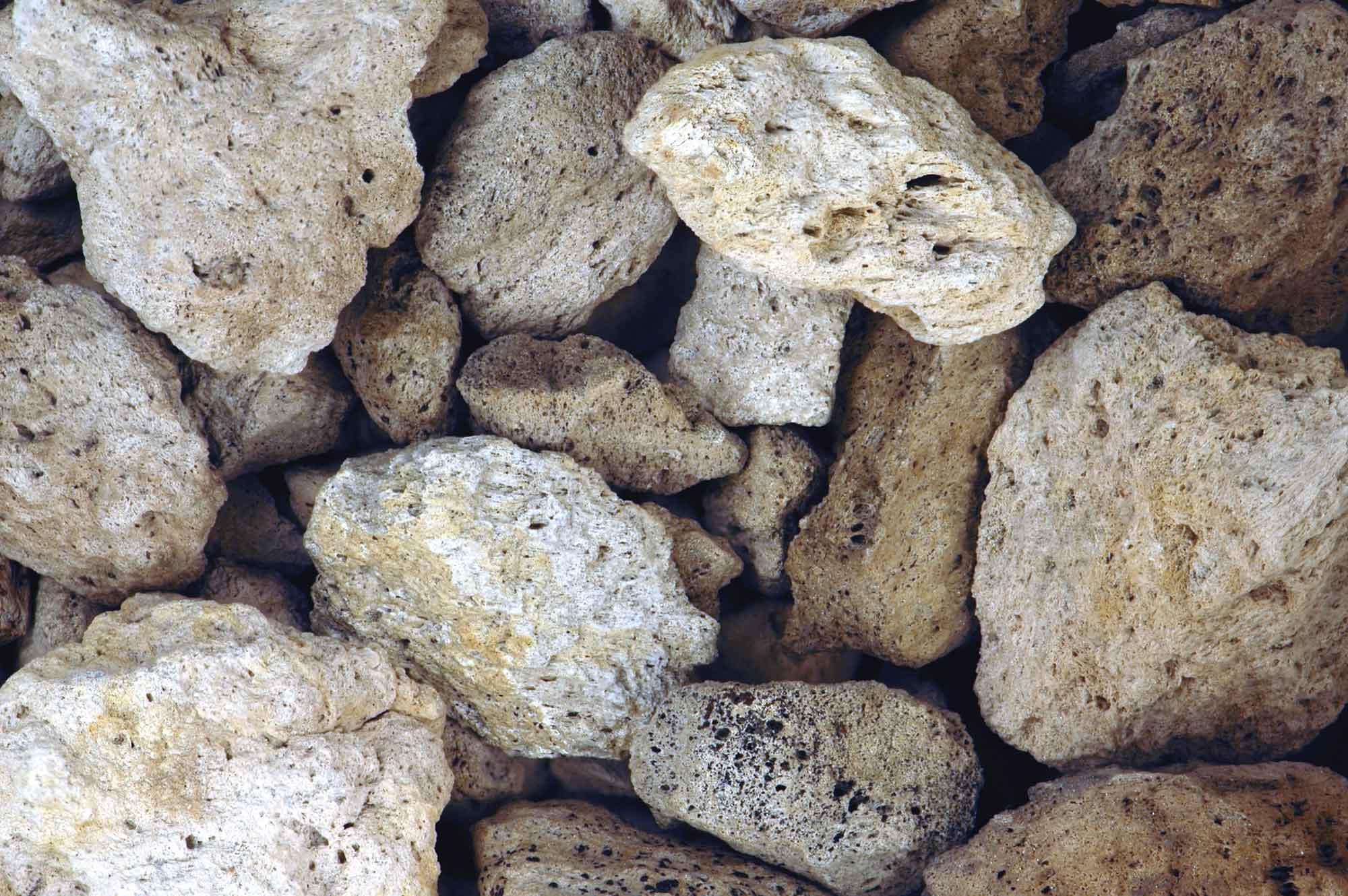 Pumice can also be used as lightweight aggregate, insulators, absorbents, and abrasives. Pumice and cinders are quarried in Deschutes County, Oregon, near the town of Bend. Further south in Klamath County, Oregon, pumice is also quarried commercially.

Near the Canadian border in the northern Cascades, the Twin Sisters dunite contains one of only two olivine mines in the United States. Dunite is olivine-rich ultramafic mantle rock, and is rarely found at the surface. Olivine has a high heat tolerance, making it ideal for use in foundries when casting objects and when lining kilns, furnaces, incinerators, and reactors. It is also a good material for sandblasting and for other abrasive uses. In Whatcom County, olivine is mined mostly for abrasive purposes, although a small amount of foundry-grade material is also produced.