The ozone hole does not cause global warming.  Ozone occurs naturally in a layer of the atmosphere called the stratosphere. The ozone hole is a region of the stratosphere over Antarctica (and to a lesser degree over the Arctic) where the amount of ozone had decreased in the late 20th century, due to chemical reactions between ozone and human-made substances from things like aerosol spray cans and refrigerants. Ozone is a greenhouse gas, so its presence has a warming effect, and the result of declining ozone in the late 20th century has been a regional cooling of the stratosphere over Antarctica, not warming. 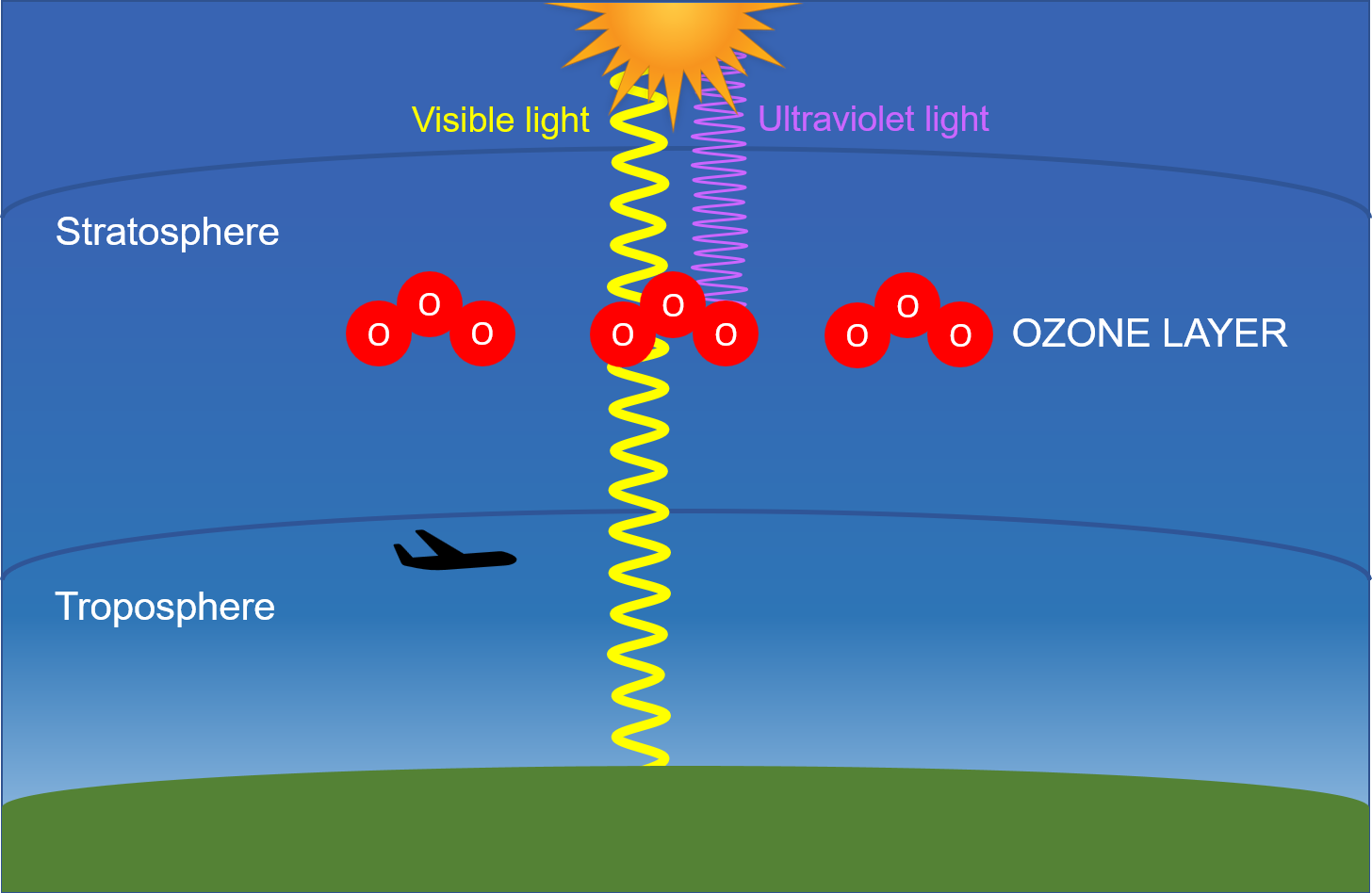 Ozone is a naturally occurring molecule that is found high up in the atmosphere, in a layer called the stratosphere (Figure 1.) That’s just above where we fly airplanes. Stratospheric ozone protects us and other life on the planet, because it absorbs ultraviolet light from the Sun which can harm our skin and eyes, as well as other organisms.

The ozone hole is not a literal hole in the stratosphere—it’s a region where ozone levels declined in the late 20th century. Ozone was depleted through chemical reactions between ozone and human-made substances from things like aerosol spray cans and refrigerants.

In what way could the ozone hole lead to global warming? Remember that the ozone hole is a region where ozone is depleted. You might think that if there’s less ozone in the stratosphere, that means more ultraviolet light can pass through the atmosphere, and this will warm the Earth. But any warming effect from this is small compared with the greenhouse warming due to gases such as carbon dioxide and methane in the atmosphere.  And the ozone hole has no effect on the amount of visible light reaching the Earth—the Sun radiates visible light most strongly (see Appendix), and it’s this visible light which is the key component of sunlight that factors into the greenhouse effect.

A bigger ozone hole does not cause global warming, but ozone is a greenhouse gas, so its presence has a warming effect.  The main climate effect of a bigger ozone hole—that is, less ozone over Antarctica—has been to cool the stratosphere over Antarctica. This can affect large-scale wind patterns in the Southern Hemisphere, but it has not led to global warming. When it comes to greenhouse gases in the atmosphere, scientists are much more concerned about carbon dioxide than about stratospheric ozone. 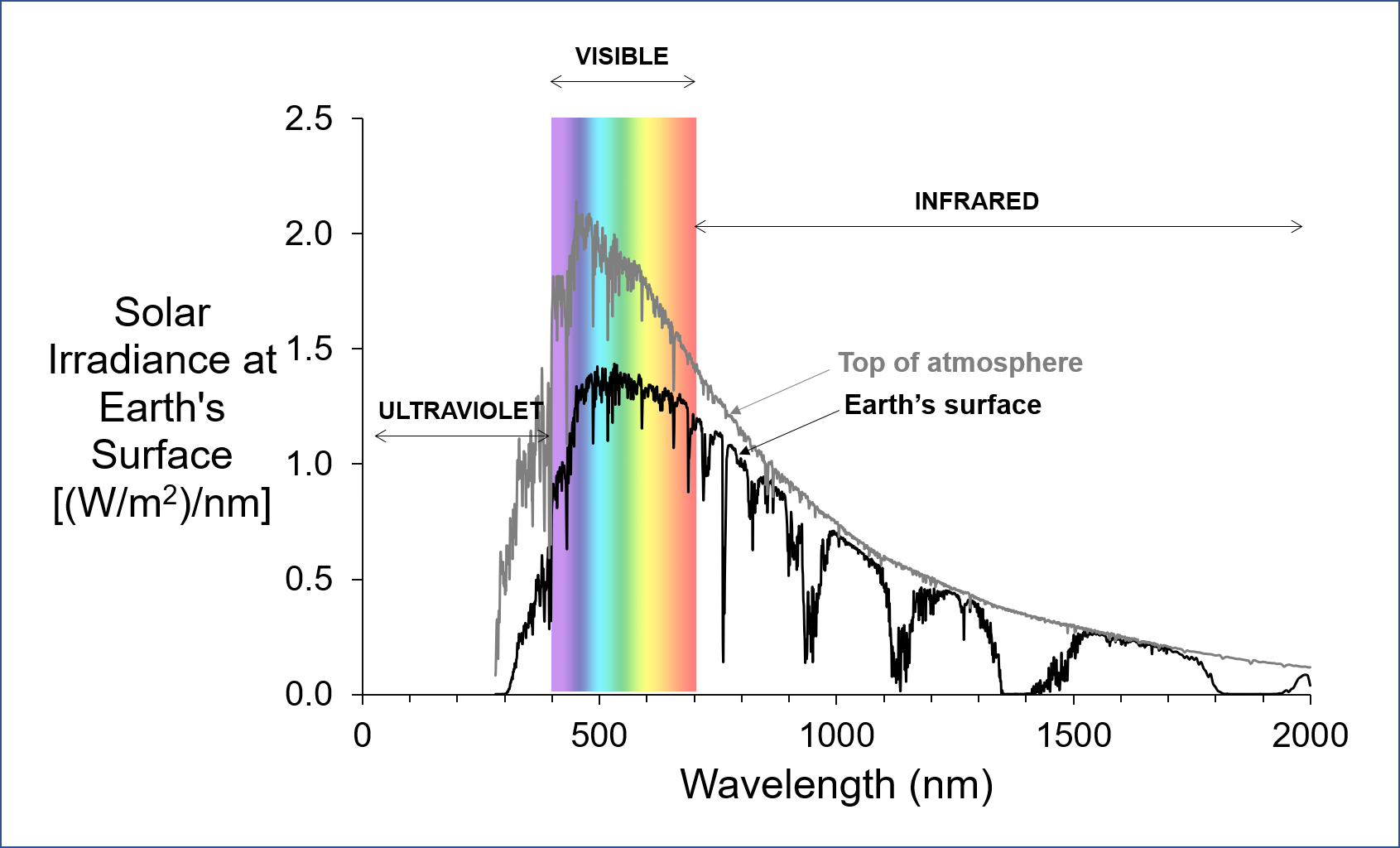 Figure 3: Spectrum of solar energy, at the top of the atmosphere (grey) and at the Earth’s surface, after passing through the atmosphere (black). Data from U.S. Department of Energy National Renewable Energy Laboratory. Figure by Ingrid Zabel for PRI's [email protected] project (CC BY-NC-SA 4.0 license).

The Sun radiates different types of electromagnetic energy, including ultraviolet light, visible light, and infrared light. Figure 3 shows two spectra for sunlight—graphs of solar irradiance as a function of the wavelength of the sunlight. The grey curve shows the solar energy at the top of the Earth’s atmosphere, and the black curve shows the solar energy at the Earth’s surface, after passing through the atmosphere. We see that the black curve is lower overall than the grey curve, meaning that some energy is lost between the top of the atmosphere and the Earth’s surface. This is because some sunlight is reflected back out to space, and some is absorbed by gases in the atmosphere.

What color is the Sun? http://solar-center.stanford.edu/SID/activities/GreenSun.html