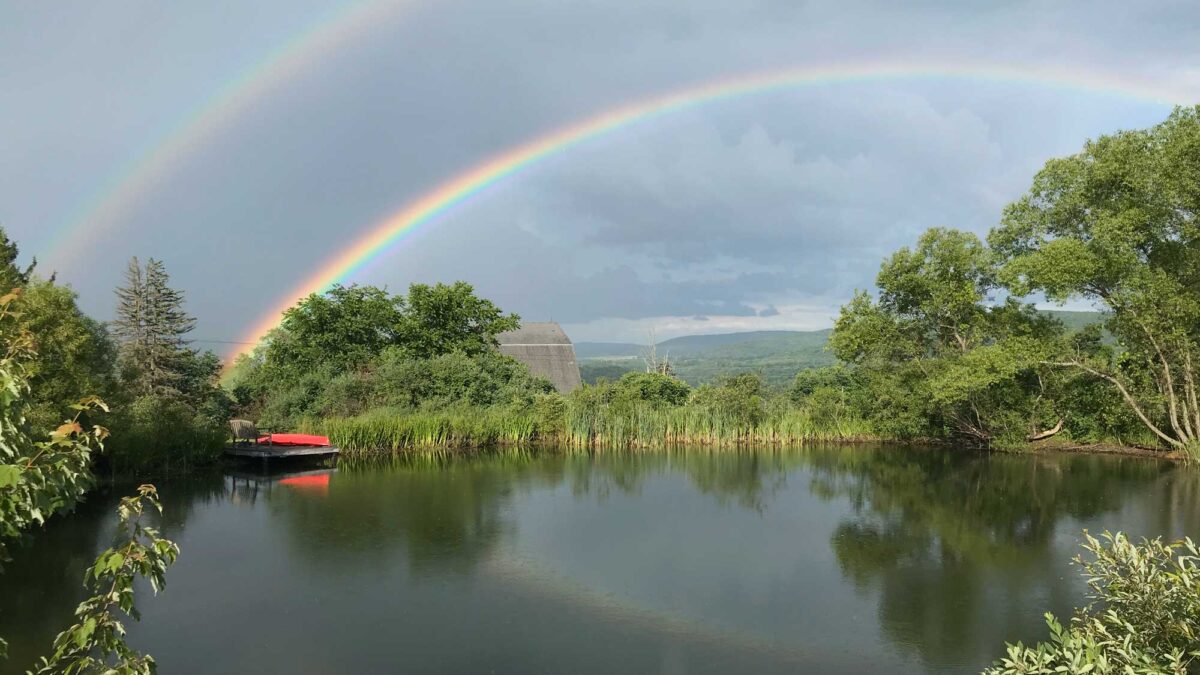 Page Topics: Overview, The Greenhouse Effect and the Greenhouse Metaphor, Why all the Fuss about Carbon Dioxide?, and Measuring CO₂ and Other Gases in the Atmosphere.

"The Long & Short of Absorption & Transmission (In the Greenhouse #4)" by the Paleontological Research Institution (YouTube).

When visible light from the sun is absorbed by the Earth’s surface, its energy is transformed to heat energy that increases the temperature of the surface. Some of this energy is re-emitted back into the atmosphere as infrared light. Since the atmosphere absorbs infrared light, some of this light is captured by the atmosphere and then reemitted both up into space and back down to the surface again, effectively trapping heat. This phenomenon is called the greenhouse effect and depends on the levels of greenhouse gases—carbon dioxide, methane, water vapor, and others—that make up only a tiny fraction of the gases in our atmosphere. 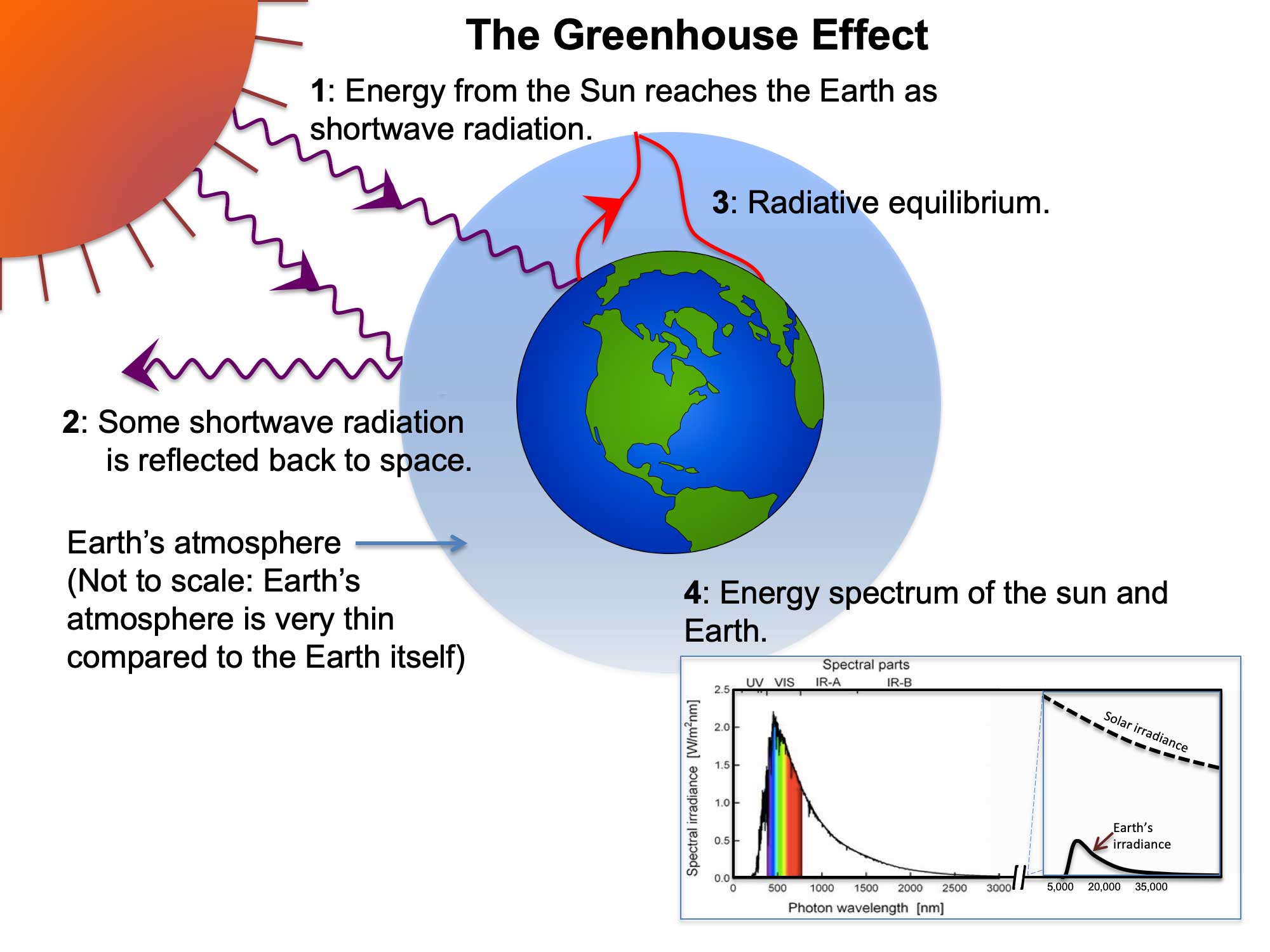 The greenhouse effect. 1, Energy from the sun reaches the Earth as shortwave radiation. 2, Some shortwave radiation is reflected back to space. 3, Radiative equilibrium. Earth’s surface emits the same amount of energy that it absorbs from the Sun - but at longer wavelengths because the Earth is cooler than the sun. When this long-wavelength radiation encounters greenhouse gas molecules in the atmosphere the molecules absorb the radiation, which warms the atmosphere, until the emitted energy equals the absorbed energy. 4, Energy spectrum of the Sun and Earth. Both objects emit a range of wavelengths, however, the sun emits most of its energy at the short wavelengths of the visible part of the spectrum, while Earth emits all of its energy in the infrared part of the spectrum. The peak wavelength corresponds to the temperature of the object; short = hot, long = cool.  In this figure, the Earth’s spectrum is shown with a vertical exaggeration of ~1,000,000x. Note change in horizontal scale at ~3500 nm. Original image from "Climate Change Past Present & Future: A Very Short Guide" by Allmon et al. (2010); modified by Alexandra Moore and Jonathan R. Hendricks for PRI's [email protected] project (CC BY-NC-SA 4.0 license).

The surface of the Earth, therefore, is heated both by direct radiation from the sun, but also by this trapped and retransmitted radiation. This greenhouse effect is very important for life on Earth. Without it, the average surface temperature would be below the freezing point of water, and there would be little or no liquid water, and therefore possibly no life on Earth!

On the scale of billions of years, the Earth’s climate has been controlled by the balance between its distance from the sun and the composition of its atmosphere. If we compare Earth to its planetary neighbors, Mars and Venus, we see what might have happened on Earth, but didn’t. Earth’s original atmosphere came from volcanism that emitted gases from the planet’s interior. The high concentration of CO2 and methane (CH4) in this early atmosphere kept the Earth warm when the sun was younger and fainter. This is known as the faint young sun paradox. Some of the first life on Earth put oxygen into the atmosphere by the process of photosynthesis, and drew down CO2. Lower levels of greenhouse gases in the atmosphere helped to compensate for the brightening sun, which otherwise would have warmed Earth too much for living organisms, or even liquid water, to be present. Thus, the greenhouse effect allowed life to exist on Earth when it might not have otherwise.

A greenhouse works by letting energy from the sun in through its windows, and then trapping warmed air from escaping with the same windows. In the atmosphere, what is commonly referred to as the “Greenhouse Effect” is more complex.

Step 1: Earth absorbs energy from the sun in the form of shortwave radiation (visible light), which heats the planet’s surface.

Step 2: Earth emits some of this heat in the form of long-wave (infrared) radiation.

Step 3: Some of the longwave radiation being given off by the planet strikes molecules of greenhouse gases in the atmosphere and is absorbed. These gases re-radiate infrared light, warming the air.

Step 4: Because of the chemistry of greenhouse gases, longwave radiation is more easily trapped than shortwave radiation. As a result, much of the heat given off by Earth is retained by the atmosphere instead of being allowed to pass through.

The greenhouse metaphor is not a perfect one. Greenhouse windows let light into a building, which heats the air. The windows then protect that heat from being dissipated or carried away by winds, locally providing heat to the plants inside. Earth’s atmosphere, on the other hand, is open, so air is not being trapped. Rather, greenhouse gas molecules in the atmosphere are radiating heat back towards the Earth.

Learn more in the videos below.

"Seeing (Infra)Red (In the Greenhouse #1)" by the Paleontological Research Institution (YouTube).

"Greenhouse in a Beaker (In the Greenhouse #2)" by the Paleontological Research Institution (YouTube).

Why all the Fuss about Carbon Dioxide?

Carbon dioxide (CO2) is a molecule made of one atom of carbon and two atoms of oxygen.

CO₂ by decay_dance on Sketchfab

A single molecule of carbon dioxide. Model by "decay_dance" (Sketchfab).

Within the range of temperatures found on Earth, CO2 usually takes the form of a gas. It is a natural component of Earth’s atmosphere, exhaled by aerobic organisms such as plants, animals, fungi, protists, and many bacteria, and used by plants in the process of photosynthesis. Thus, concentrations of CO2 in the atmosphere vary seasonally as a result of deciduous plants in the northern hemisphere that, in the summer, absorb more CO2 than they release.

CO2 is part of the carbon cycle (learn more here), which includes carbon found in living things, the atmosphere, oceans, and Earth’s crust—in limestone, and in oil, natural gas, and coal deposits. Because carbon usually cycles slowly through the ocean (thousands of years) and the crust (millions or billions of years), these are called “carbon sinks.” Without human intervention the carbon cycle is generally in equilibrium, with approximately as much carbon being released into the atmosphere each year as is absorbed by sinks worldwide.

Large forests are carbon sinks, storing carbon in their biomass until they die and decay. Some large forests, such as the Amazon rainforest, are shrinking because of human activities such as deforestation. As the forests are destroyed they release their carbon back into the atmosphere and switch from carbon sinks to carbon sources.

Human burning of fossil fuel, such as oil, natural gas, and coal, releases the carbon stored in the ancient organic matter as CO2 gas. Because these sinks have been long-term repositories for carbon, their rapid release into the atmosphere has caused an imbalance which results in increasing levels of CO2 in our atmosphere and oceans.

This additional emission of CO2 into the environment, and the reduction of some carbon sinks, tips the equilibrium of the carbon cycle, so that each year the concentration of CO2 in the atmosphere grows by about 1%. This is believed to be the primary cause of current climate change.

Among greenhouse gases, water vapor actually has the greatest capacity to absorb longer-wavelength radiation. In studying changes in the Earth’s surface temperature over time scales of more than a few weeks, however, more attention is usually given to CO2 because water vapor concentration in the atmosphere changes much more quickly than does CO2. For example, a molecule of water vapor, such as might evaporate from the ocean, will remain in the atmosphere for approximately two weeks, whereas an average molecule of CO2, such as you might exhale, will remain in the atmosphere for hundreds of years. Therefore, dramatically increased levels of CO2 resulting from human activities can impact the climate for thousands of years.

"Feel the Heat Capacity (In the Greenhouse #5) by the Paleontological Research Institution (YouTube).

Measuring CO2 and Other Gases in the Atmosphere

The concentration of a gas in the atmosphere is commonly measured in parts per million (ppm). A value of 1 ppm means that one molecule is present in every million molecules of air. One molecule in a million does not sound like a lot of molecules, but one cubic centimeter of air at the Earth’s surface contains approximately 2.7 x 1019 molecules, so a 1 ppm concentration of a gas has 2.7 x 1013 molecules in the same small volume. That’s 27 trillion molecules of CO2 in the space of a sugar cube!

The average annual concentration of CO2 in the atmosphere prior to the Industrial Revolution (when large quantities of fossil fuels began to be burned by humans) was approximately 280 ppm. This has been determined by measuring CO2 trapped in air bubbles in ice sheets. By the mid-twentieth century, atmospheric CO2 concentrations were well above this, around 310 ppm, and now they have reached over 414 ppm. You can view today's trend on NOAA's Global Monitoring Laboratory website. 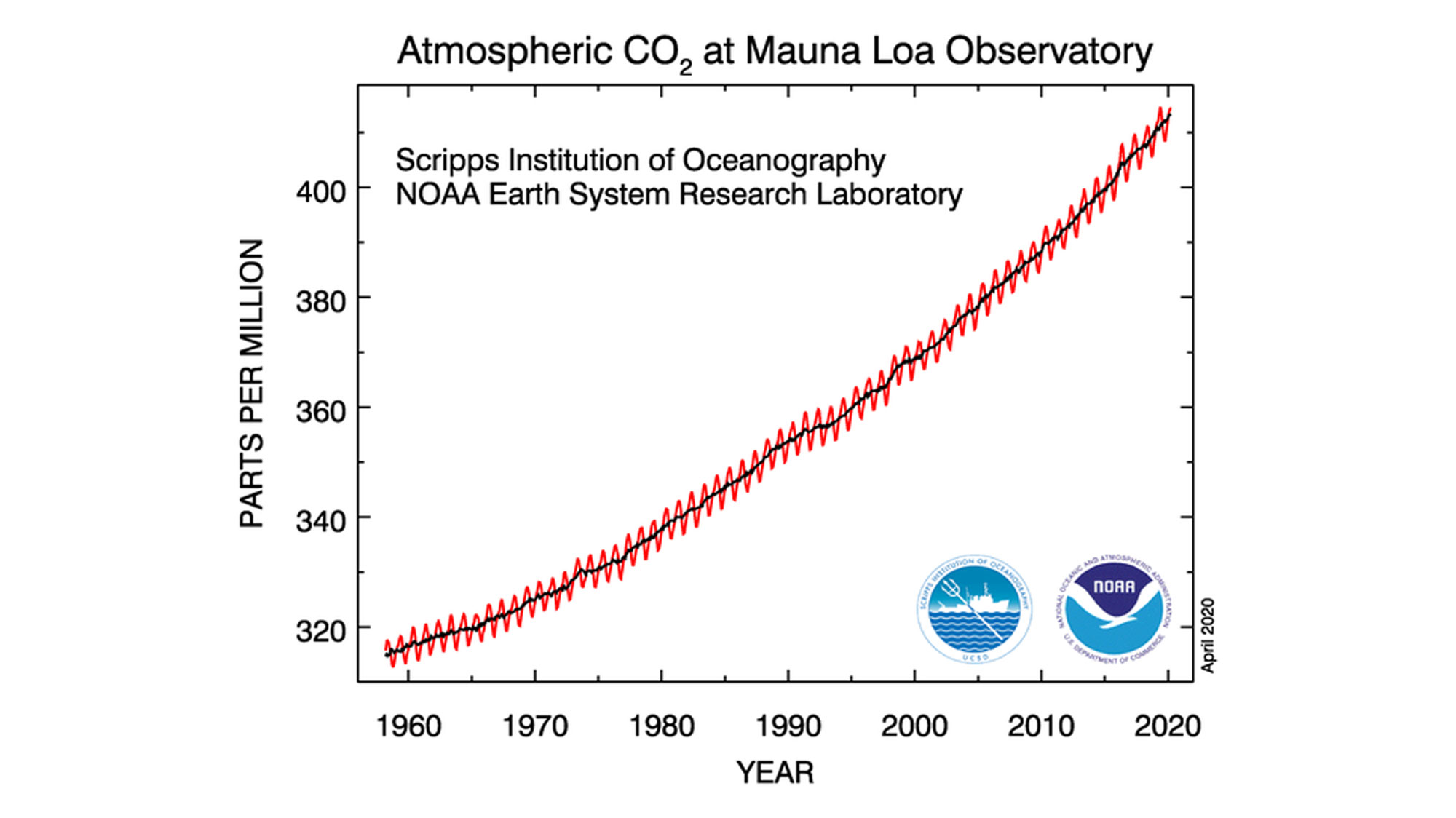 Scientists suspected as early as the late 1890s that CO2 concentrations might influence the temperature of the Earth, but it was not until the 1950s that scientists began to systematically measure the concentration of CO2 in the atmosphere with high degrees of accuracy and on a regular basis.

"Changes in Global CO2 (In the Greenhouse #3)" by the Paleontological Research Institution (YouTube).