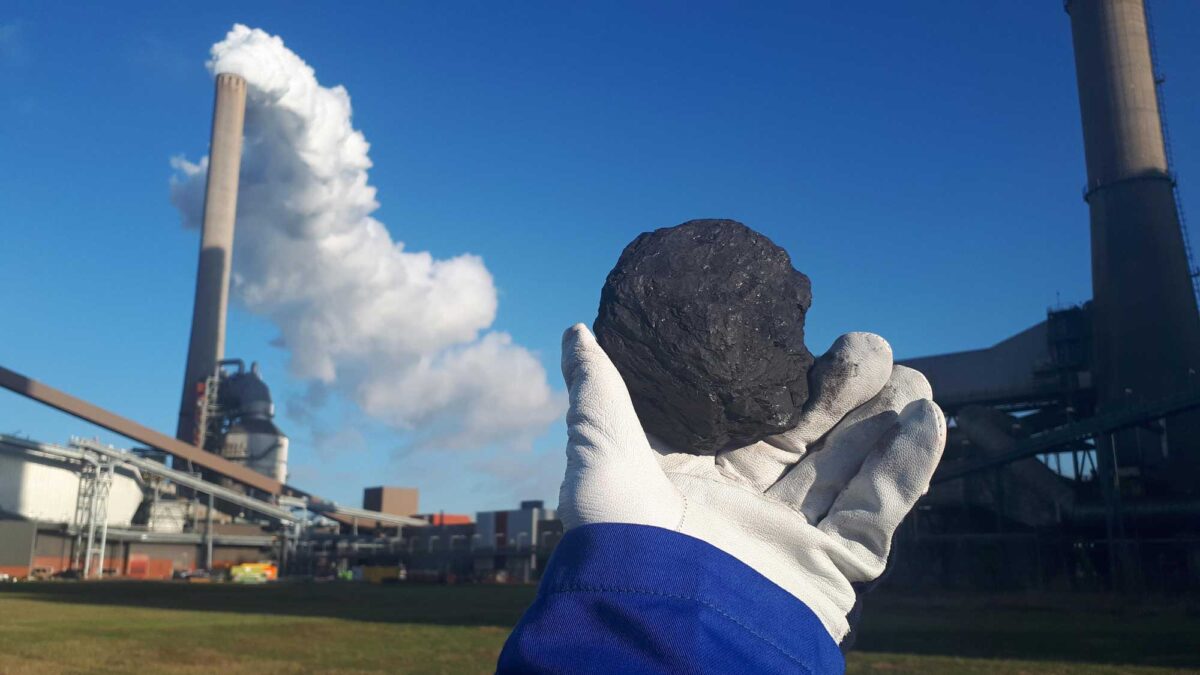 Evidence for and Causes of Recent Climate Change

Image above: A piece of coal being held in front of a coal-fired power plant in the Netherlands. Photograph by "Adrem68" (Wikimedia Commons; Creative Commons Attribution-Share Alike 4.0 International license).

How can we be sure that changes going on now are not just part of natural climate variation? It is worthwhile to consider the potential causes of recent climate change, both natural and anthropogenic (human-caused), and to evaluate the effects of each one.

The Earth’s tilt, wobble, and orbit around the sun go through predictable cyclical changes (Milankovitch cycles; see What is Climate chapter). These changes can have dramatic effects on the climate, and are thought to have brought on and ended glacial advances and retreats during the Ice Age (the ultimate long term cause of the Earth’s transition to the Pleistocene Ice Age had separate causes). The changes in these cycles over last 200 years have been too small to have any significant effect on Earth’s temperature, and over the next fifty to eighty thousand years would be expected to take the Earth toward another glacial advance.

Changes in the energy output from the sun do not successfully account for the current warming trend. Eleven-year sunspot cycles have been consistently recorded, but these have risen and fallen as expected, never increasing their net output of energy. No other solar outputs correlate with the warming trend, either. So for the period for which we have direct, observable records, the Earth has warmed dramatically even though there has been no corresponding rise in any kind of solar activity.

Volcanos emit greenhouse gases when they erupt, which can lead to climate warming if the input of CO₂ to the atmosphere is sufficiently large. Volcanic eruptions can also have a short-term cooling effect because the sulfate particles they emit block incoming sunlight. The eruption of Mt. Pinatubo in 1991 led to an almost 0.6°C (1°F) decrease in average global temperatures over 15 months. The net long-term effect of volcanism over the last 200 years has not been significant enough to warm the climate. According to the IPCC “the emissions of CO₂ from volcanic eruptions are at least 100 times smaller than anthropogenic emissions, and inconsequential for climate on century time scales" (see here).

When people cut down forests to plant crops, the physical properties of the land’s surface change. Crops tend to be lighter colored than forests so they reflect away more incoming sunlight (i.e., they have a higher albedo), leading to cooling. Changes in the land surface roughness and water runoff from land use changes can also change the surface temperature. According to the 2013 IPCC report these changes tend to offset the albedo effect, but all these changes are hard to quantify and the scientific community does not have a good understanding on if these effects of land use change lead to a small net cooling or small net warming. It is clear that deforestation leads to increased CO₂ in the atmosphere because intact forests are carbon sinks. The loss of these carbon sinks, especially tropical rain forests, accelerated in the late 20th century.

Aerosols are tiny particles in the air, from both natural and human-made sources such as dust, volcanic eruptions, biomass burning, sea salt, and vehicle and factory emissions. Their presence in the stratosphere tends to have a net cooling effect on Earth’s climate because they reflect incoming sunlight back into space. Aerosols can also serve as cloud nucleation sites and can alter the reflectivity of clouds. The impact of clouds on Earth’s climate is not as well understood as other parts of the climate system, but according to the 2013 IPCC report aerosols are thought to cool the climate.

As discussed above and as seen in the figure below, carbon emissions from human activity and concentrations of CO₂ and other greenhouse gases in the atmosphere have risen dramatically since the industrial revolution began in the early 1800s. 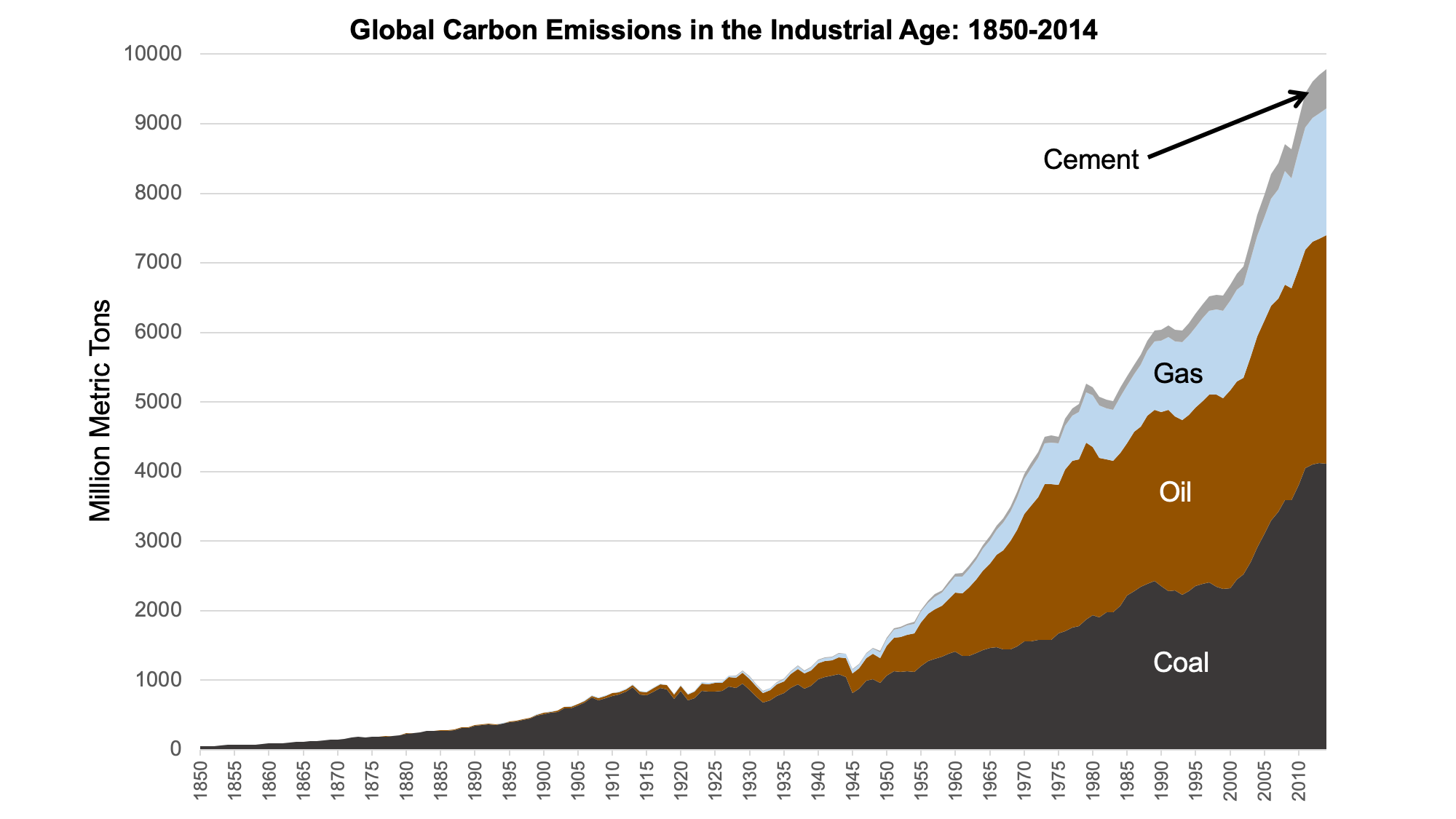 Global carbon emissions from burning coal, oil, gas, and producing cement (1850-2014) (data from Boden et al., 2017; data here). These emissions account for approximately 80% of the total emissions of carbon from human activities, with land-use changes (like cutting down forests) accounting for most of the other 20% in recent decades. Note that about 5% of global CO₂ emissions come from cement production. Making cement involves heating limestone to very high temperatures in kilns. The CO₂ escapes directly from limestone during heating, and it is also released in burning the fossil fuels used to run the kilns. Image created by Jonathan R. Hendricks for PRI's [email protected] project (CC BY-NC-SA 4.0 license).

Earth’s average temperature has been rising in a way that cannot be accounted for by natural variation alone. Climate models that incorporate increasing CO₂ explain this warming trend better than any models based on natural variation alone. The pattern of the observed warming fits the pattern that we would expect from warming caused by the buildup of greenhouse gases, that is, almost all areas of the planet are warming; the Earth’s surface and lower atmosphere are warming; and the temperature changes are greatest in the Arctic during winter.

Evidence from isotopes confirm that the increased CO₂ in the atmosphere is due to the burning of fossil fuels. Isotopes of an element have the same number of protons but different numbers of neutrons in the nucleus. All carbon atoms have a nucleus with six protons (this determines that the atom is carbon), but carbon nuclei can have six, seven, or eight neutrons. The mass of the atom is the sum of the protons and neutrons, so the isotopes of an element each have a different mass. For carbon we have 12C, 13C, and 14C.  14C is unstable and undergoes radioactive decay. 12C and 13C are stable isotopes, and each are involved in all of the processes that comprise the global carbon cycle. However, because a molecule that contains 13C will be slightly heavier than one with 12C, it behaves slightly differently as it moves through the carbon cycle. For example, when photosynthesis incorporates CO2 from the atmosphere into plant biomass, that process selectively removes more “light” 12C carbon dioxide, leaving more heavy 13C carbon dioxide in the atmosphere. Therefore, the ratio of 13C:12C is greater in the atmosphere than in plants. Fossil fuels are made of ancient plants. The isotope ratio of carbon in fossil fuels is also light, reflecting that origin.

Photosynthesis and respiration cycle CO2 between the atmosphere and plants. Because that cycle is in balance, carbon in the atmosphere remains isotopically heavy while global plant biomass carbon remains isotopically light. In the notation of isotope geochemistry, δ13Catm = -8‰, while δ13Cbio = -26‰. The symbol ‰ represent parts per thousand, and the more negative value for the biosphere is indicative of its light carbon isotope ratio.

Graph showing the increasing concentration of CO₂ in the atmosphere (green) and the decreasing ratio of carbon isotopes (blue). Both trends result from burning fossil fuels. Data are from the Scripps CO₂ Program. Image created by Alexandra Moore for PRI's [email protected] project (CC BY-NC-SA 4.0 license).

What this tells us is that the CO2 added to the atmosphere is isotopically light, driving down d13Catm  to ever more negative values. The burning of fossil fuels is a one-way process that adds CO2 to the atmosphere with no compensating removal process. Quantitative analysis of the isotopic composition of the emitted fossil fuels accurately reproduces the observed δ13C change in the atmosphere. The only possible source of the light CO2 measured at Mauna Loa is fossil fuel combustion. The correlation between increasing CO2 and the decreasing δ13C of that CO2 uniquely fingerprints fossil fuel carbon as the cause of the increase in atmospheric CO2.

We have seen natural variations in climate over the past several thousand years, some of which are not well explained. Is it possible that current changes are just one of those fluctuations? The reason most scientists do not think so is that (a) the magnitude of the current trend is larger than any that we have seen in the past several thousand years, and (b) the current trend shows strong directionality in not just warming, but rate of warming, through time. Such variation does not look like any of the temperature changes seen in the past 10,000 years or so. And there are no known sources of natural variation that would give rise to changes as rapid as those observed in global temperature over the past 150 years.

Could current changes just be unusually extreme variation that we do not yet understand? Yes. In science (by definition), all phenomena are open to new explanations, so scientists must always be ready to consider other options. Scientists do not, however, favor or give equal weight to random or unknown variation if another known explanation fits the available data. Some explanations are better than others, and it would be ineffective to act as if every explanation, no matter how unlikely, should receive equal treatment. The explanation of increased greenhouse gases in our atmosphere causing current warming fits the data extremely well.

Over the past billion years, the Earth has experienced climates that were much warmer than those of today, as well as much colder periods. This fact, however, does not mean that future warming is nothing to worry about. The geological record tells us that these changes in Earth’s past were usually much more gradual—occurring over thousands or millions of years—than many of the changes likely to occur in the very near future. And natural climate changes that have occurred rapidly have been linked to very rapid environmental change. Some periods of rapid climate change are associated with very large extinction events to organisms that had previously been thriving. The geological record, furthermore, tells us that our species—Homo sapiens—has not experienced since civilization developed about 10,000 years ago anything like what we are about to experience if current trends continue. Billions of people are and will be affected by the impacts of climate change, including coastal flooding, strained water supply, heat waves, and disease occurrence. It will change where and how we live and access food. We will need to learn how to adapt, and to act to limit further future warming.