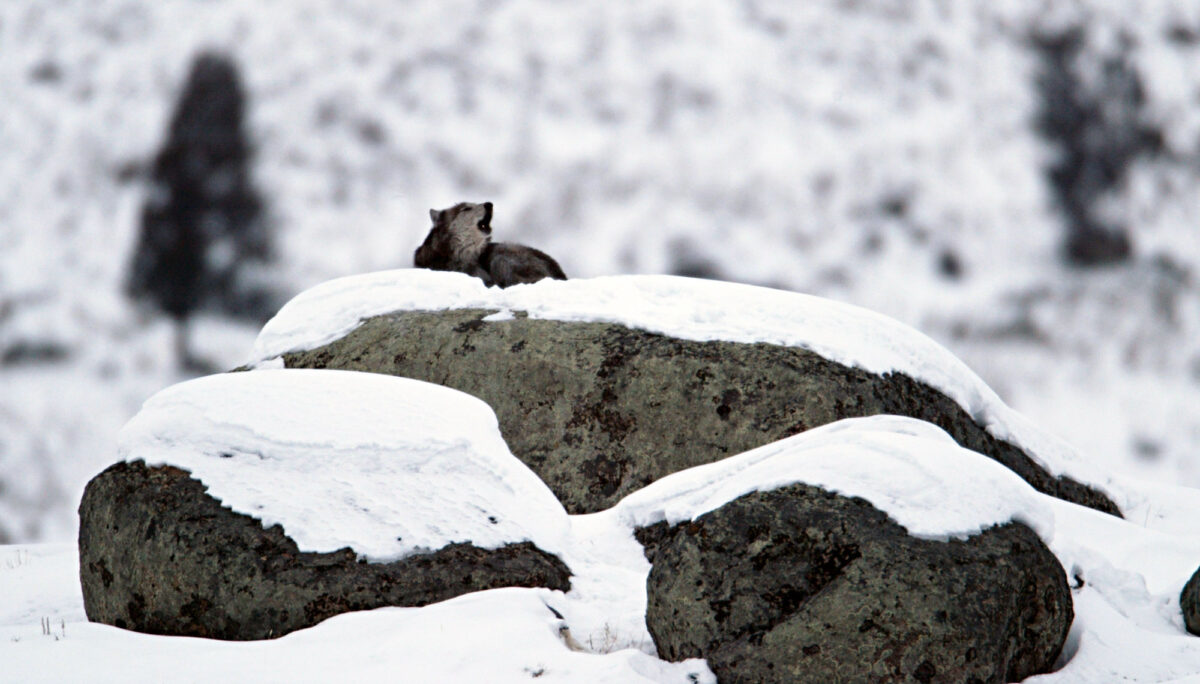 Page snapshot: Introduction to glaciers of the northwest-central United States.

Credits: Much of the text of this page comes from "Glaciers in the Nothwest-central US" by Libby Prueher, chapter 6 in The Teacher-Friendly Guide to the Earth Science of the Northwest-central US, edited by Mark D. Lucas, Robert M. Ross, and Andrielle N. Swaby (published in 2015 by the Paleontological Research Institution). This book were adapted for the web by Elizabeth J. Hermsen and Jonathan R. Hendricks in 2022. Changes include formatting and revisions to the text and images. Credits for individual images are given in figure captions.

Glaciers have had a profound impact on the scenery, geology, and water resources of the northwest-central United Sates. During the Pleistocene, continental glaciers covered much of Canada, Alaska, and the northern edge of the continental United States. Continental ice sheets blanketed the Central Lowland and the northern Great Plains, scraping away rock and overlying sediment. When the glaciers retreated, glacial drift and till were deposited.

Today, large swaths of the Dakotas and Nebraska are covered in glacial debris. Besides carving vast sections of the northern landscape and depositing huge quantities of sediment in low-lying areas, the glaciers’ impact was felt throughout the landscape; glacial outburst floods carved into Idaho and winds laden with glacial loess reached deep into Nebraska and Wyoming.

Small cirque glaciers and larger valley glaciers are found largely in the mountains of Wyoming and Montana, while a few small glaciers and perennial snowfields can be seen in Idaho. Ongoing research into how these glaciers have changed since the last major ice age is proving invaluable to our understanding of climate change. 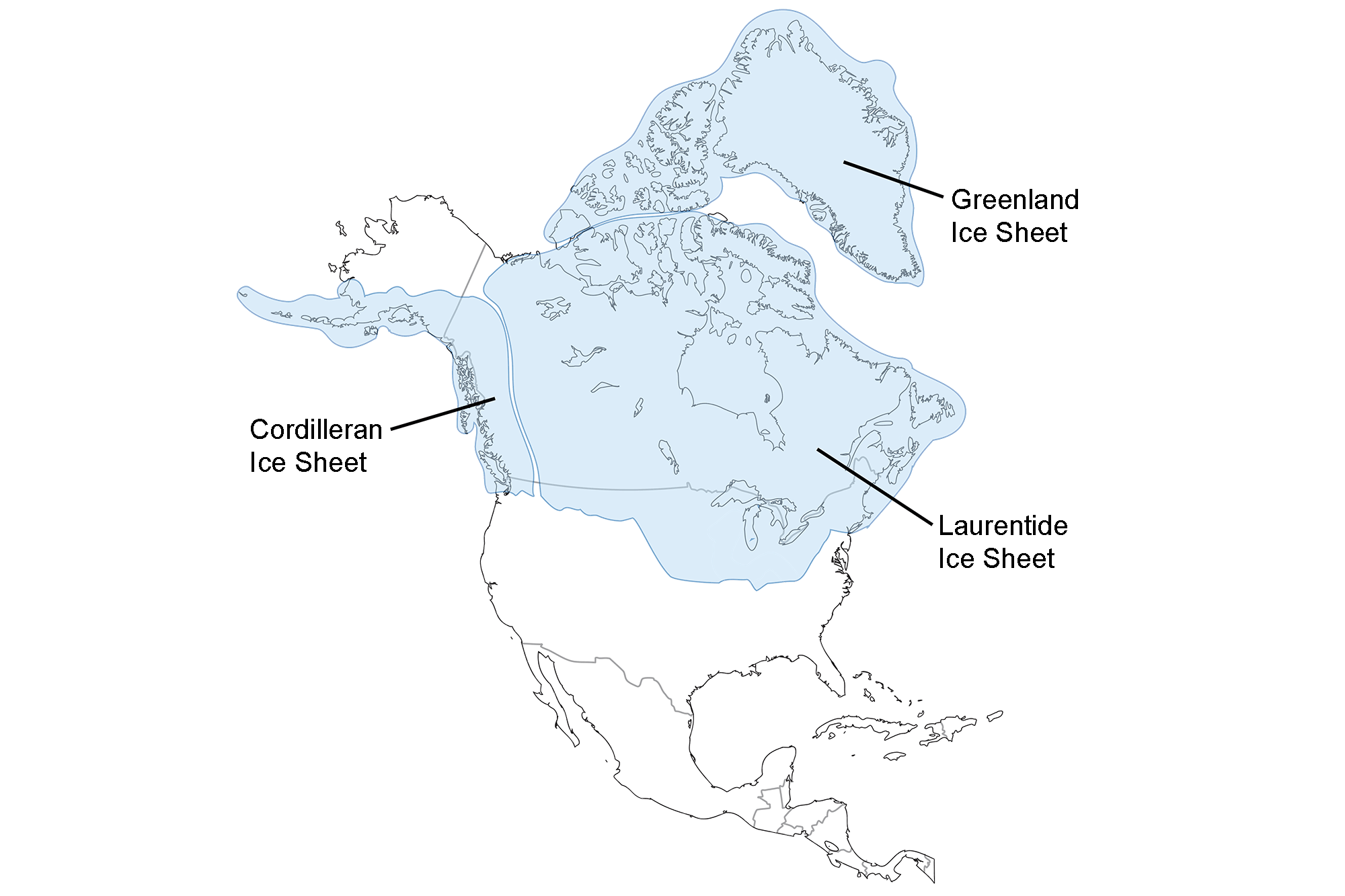 Extent of glaciation over North America at the Last Glacial Maximum. Image adapted from map by the USGS (public domain).

The Prairie Pothole Region that covers the eastern parts of the Dakotas and north-central to northeastern Montana (extending north into Canada and east into the Midwest) is a region that was reached by the Laurentide ice sheet during the last glacial maximum (Wisconsinan glaciation, 85,000–11,000 years ago). This large region is characterized by glacial deposits and its large number of "prairie potholes" or kettle lakes. Because the extensive wetlands in this region are very favorable for waterfowl, the region is sometimes referred to as a "duck factory."

This Prairie Pothole Region is further broken down into several subregions; two of these are the Glaciated Missouri Plateau (also called the Missouri Coteau) and the Drift Prairie. The Drift Prarie is a relatively flat landscape consisting of glacial drift located in eastern North and South Dakota. In some areas, there are small hills or ridges underlain by glacial debris. The Glaciated Missouri Plateau is a hilly area underlain by glacial moraines and containing many small, closed kettle lakes. The eastern edge of the plateau, extending north and south across both Dakotas, is marked by a gentle slope that exhibits topographical relief from moraines and pre-existing river valleys. It marks the western extent of glacial ice coverage in the Dakotas during the Wisconsin glaciation, and is also the boundary between the Central Lowland to the east and the Great Plains to the west. 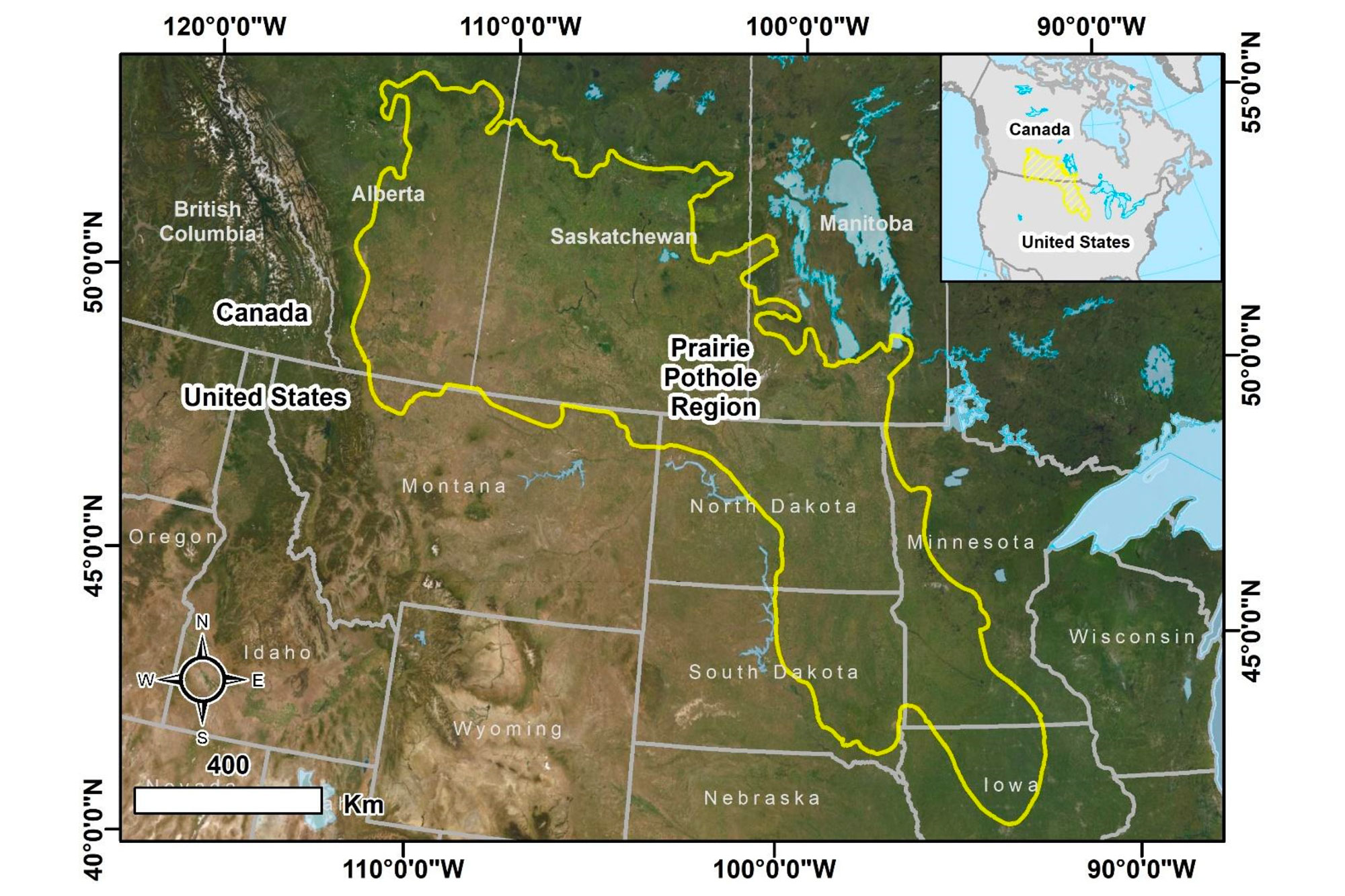 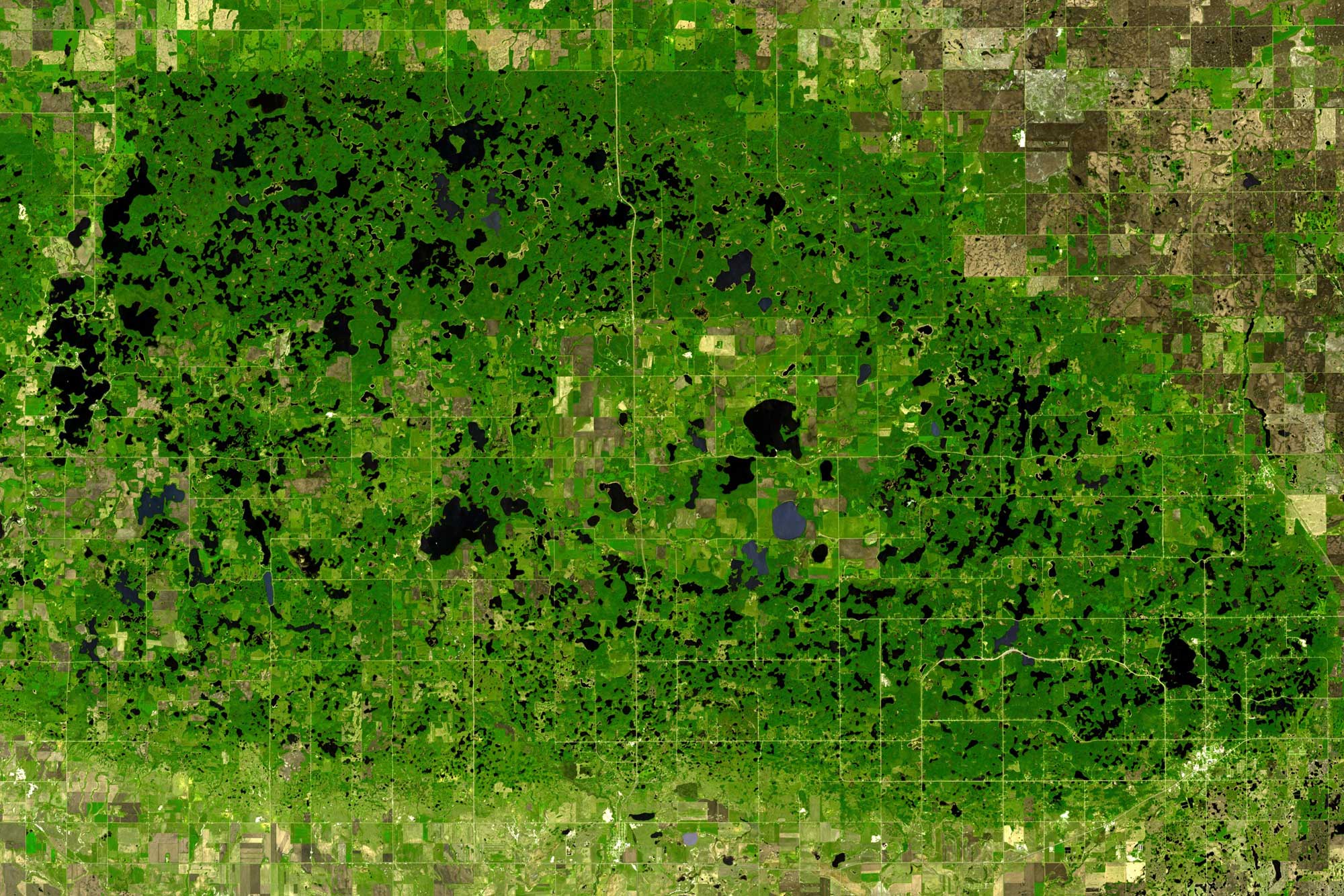 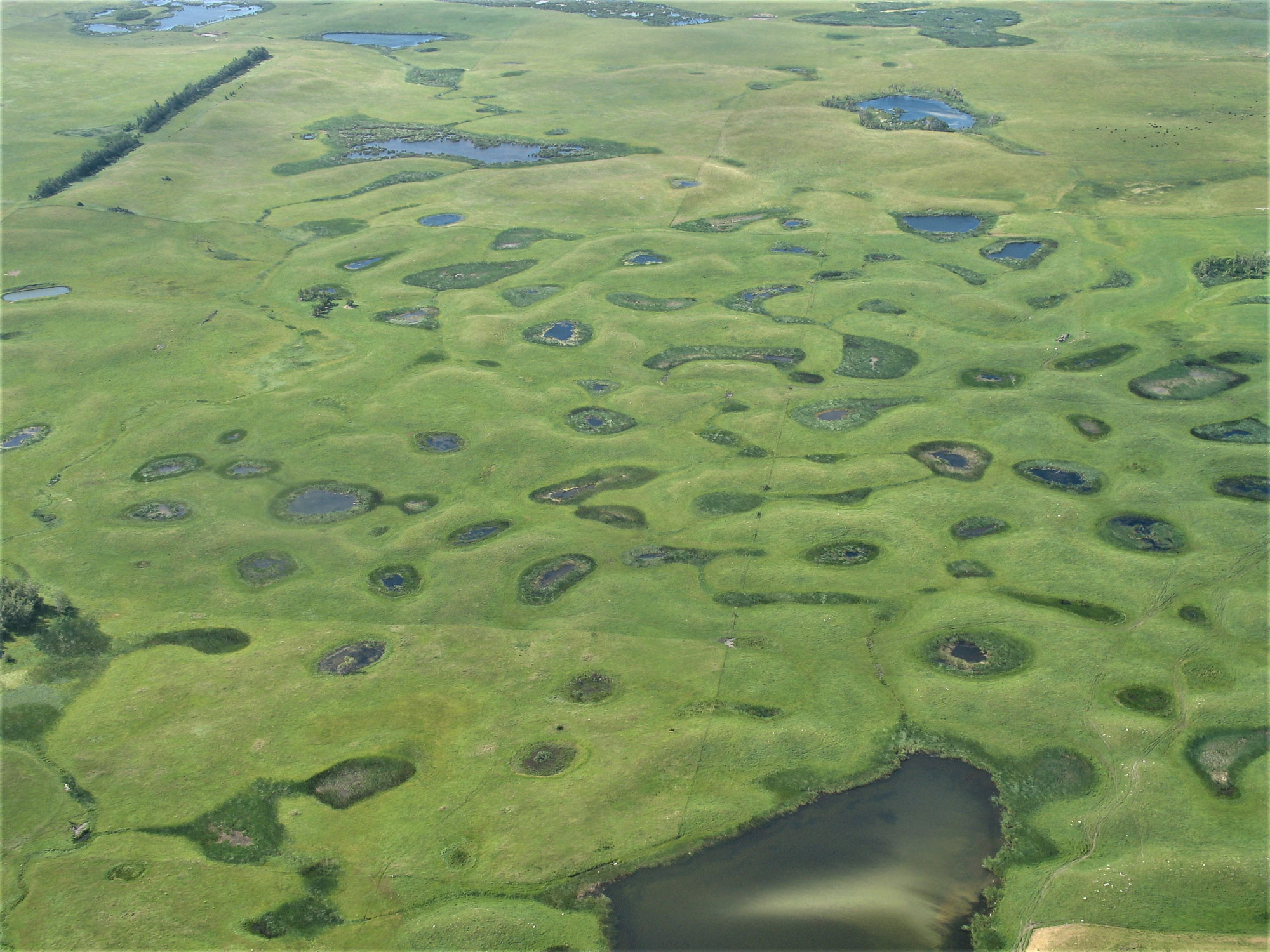 The Cordilleran ice sheet reached northern Idaho and northwestern Montana during the last glacial maximum. One especially dramatic glacial deposit left from this time is the Eureka Drumlin Field near Eureka in northwestern Montana. The drumlins in this field have a northwest-southeast orientation.

Eastern Nebraska is also covered by glacial till, indicating that glaciers reached that portion of the state during the Pleistocene. Glaciers did not cover most of eastern Nebraska during the Wisconsinan glaciation (the most recent glacial advance), so the till in eastern Nebraska is older than the glacial deposits found at the surface in Montana and the Dakotas. The Nebraska till is pre-Illinoian (1.8 million–302,000 years ago), like the glacial till found in neighboring regions of Iowa, Kansas, and Missouri. 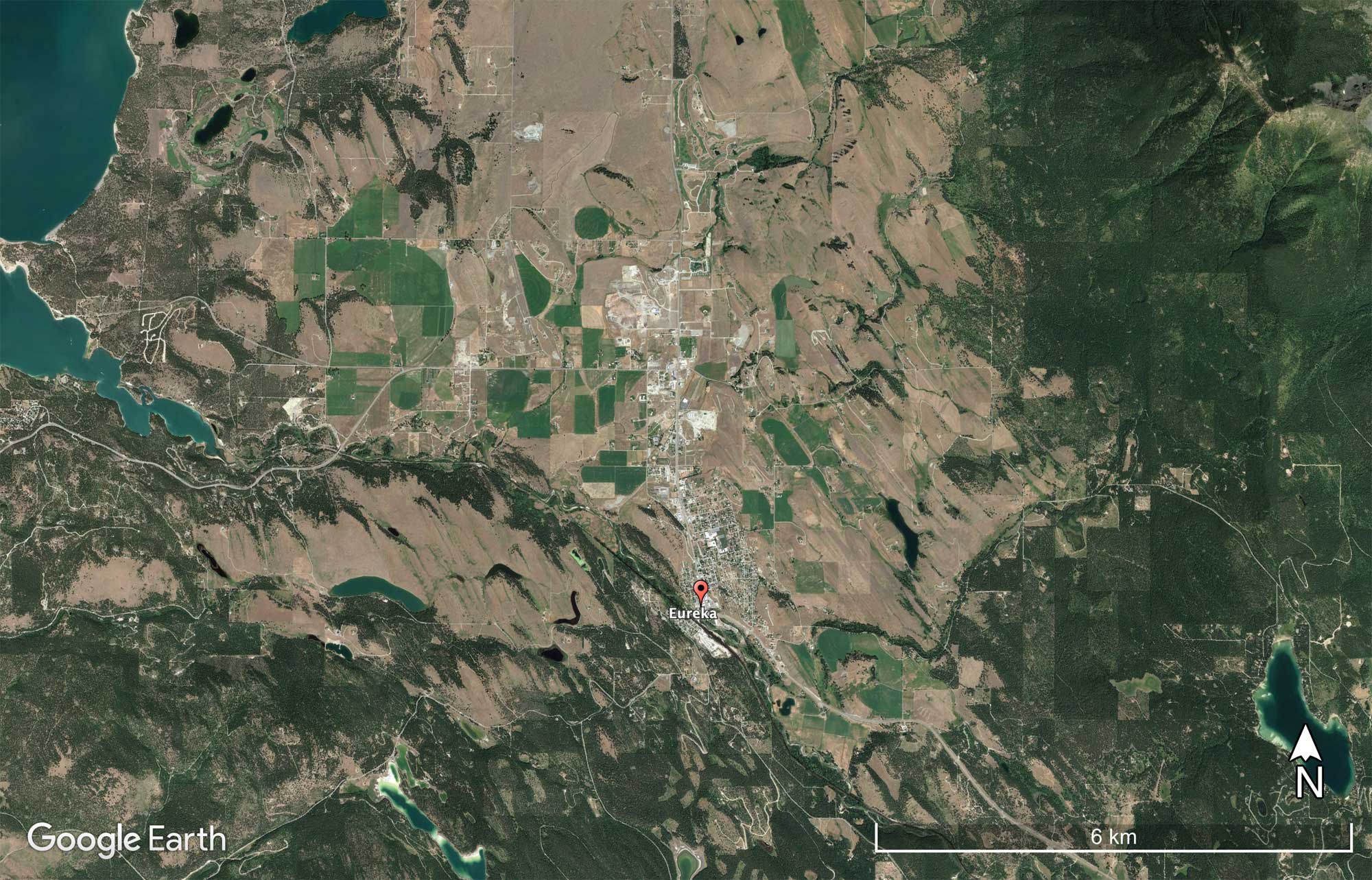 The Eureka Drumlin Field in Montana as seen by satellite. Notice the northwest-southeast orientation of the drumlins, which indicate the direction of glacial movement. Source: Google Earth (used following Google's terms of use).

Deposits of loess ("glacial flour")—silt-sized windblown material that is commonly associated with continental ice sheets—are common in Nebraska. Loess deposits are also found in the central and western Dakotas, northern and southeastern Idaho, and a small part of far western Montana. In the Palouse region of eastern Washington and northwestern Idaho, the Columbia River Basalts are covered by loess. Because the loess was not deposited evenly over the basalts, the area is characterized by hummocky terrain. 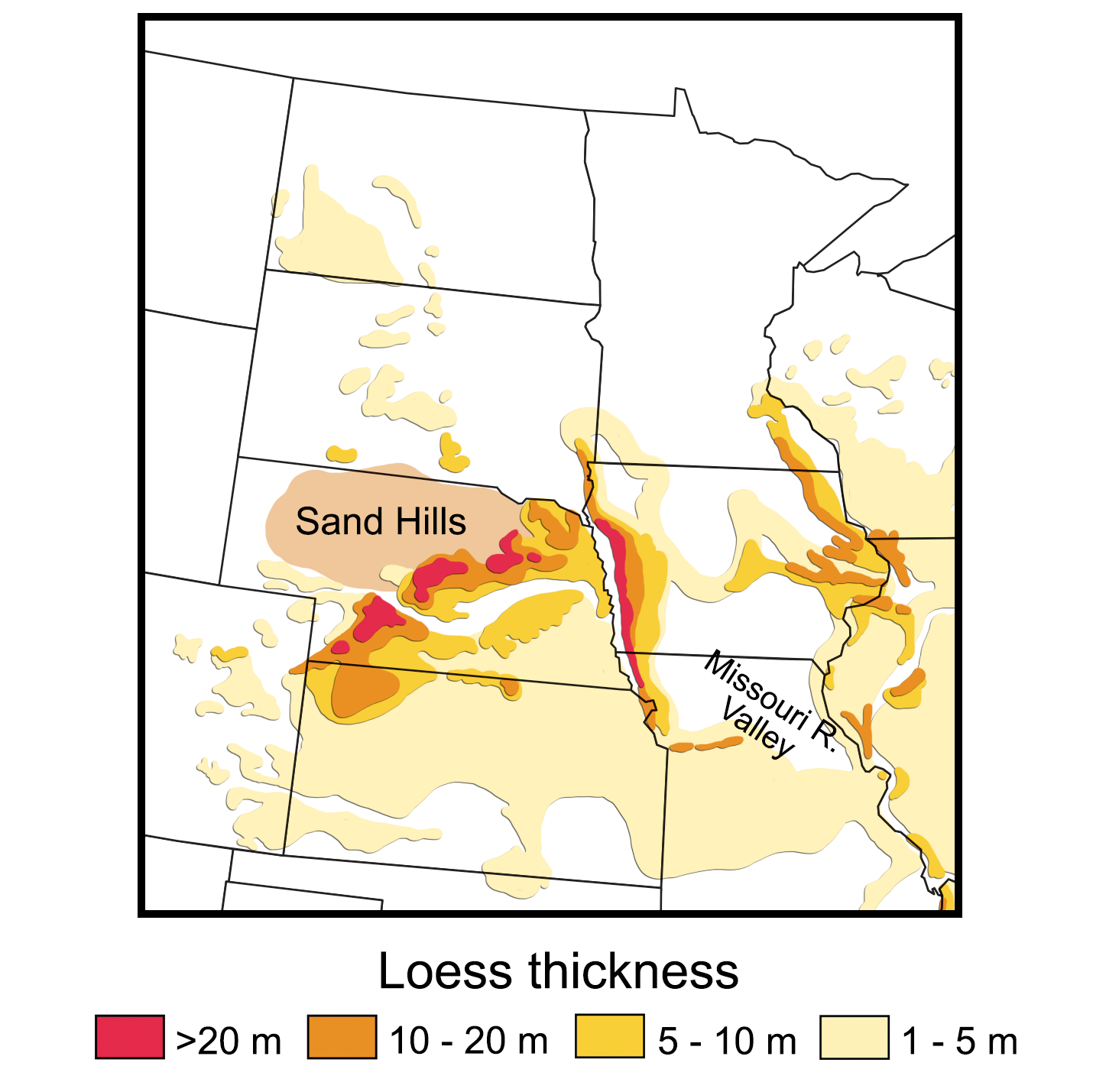 Map showing the distribution and thickness of loess deposits in Nebraska and the Dakotas. Map adapted from a map by Wade Greenberg-Brand, adapted from image in Mason, J. A., Bettis, A. E., Roberts, H. M., Muhs, D. R., and Joeckel, R. M. (2006), Last glacial loess sedimentary system of eastern Nebraska and western Iowa in Kansas Geological Survey, Technical Series 21. Originally published in The Teacher-Friendly Guide to the Earth Science of the Northwest Central US. 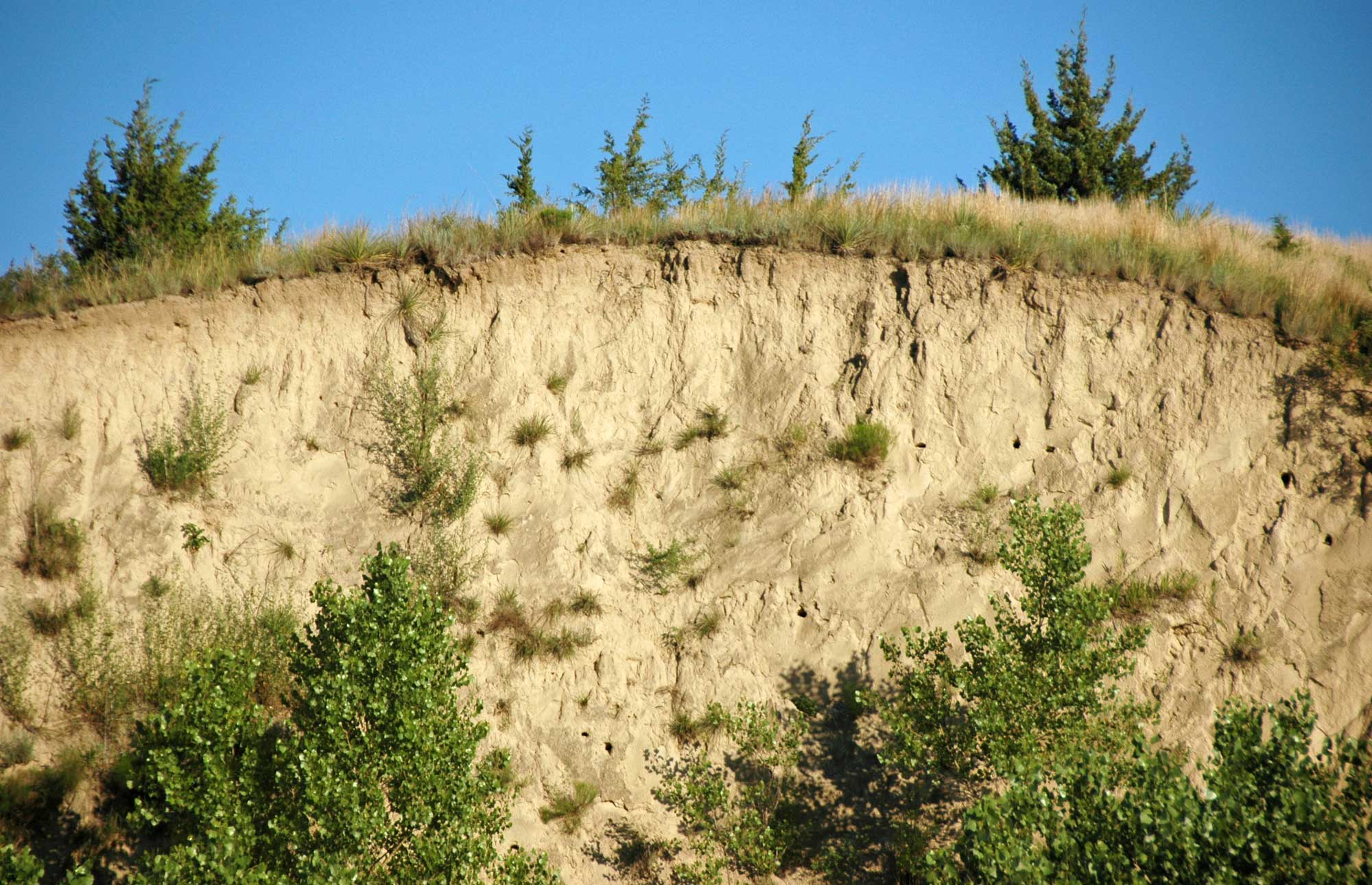 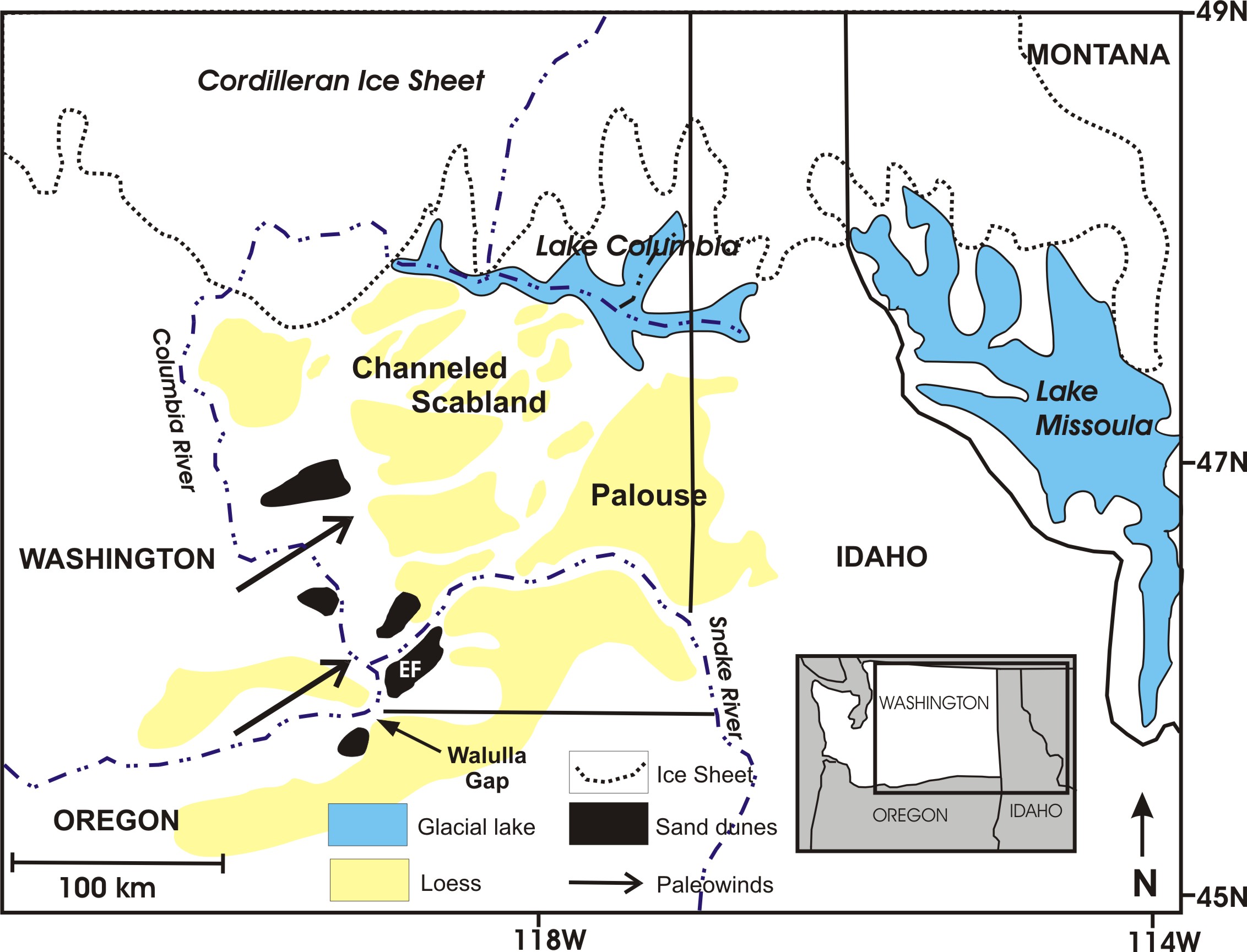 Original caption: "Depiction of the Channeled Scabland and Palouse region during the last glacial maximum. Old loess was scoured by floods to leave a braided network of loess islands. Floods sediments deposited in basins were reworked by the wind to form sand dunes (black) and loess (yellow). EF is the location of Eureka Flat." Map by Mark Sweeney, University of South Dakota (SERC, Creative Commons Attribution-NonCommercial-ShareAlike 3.0 Unported license). 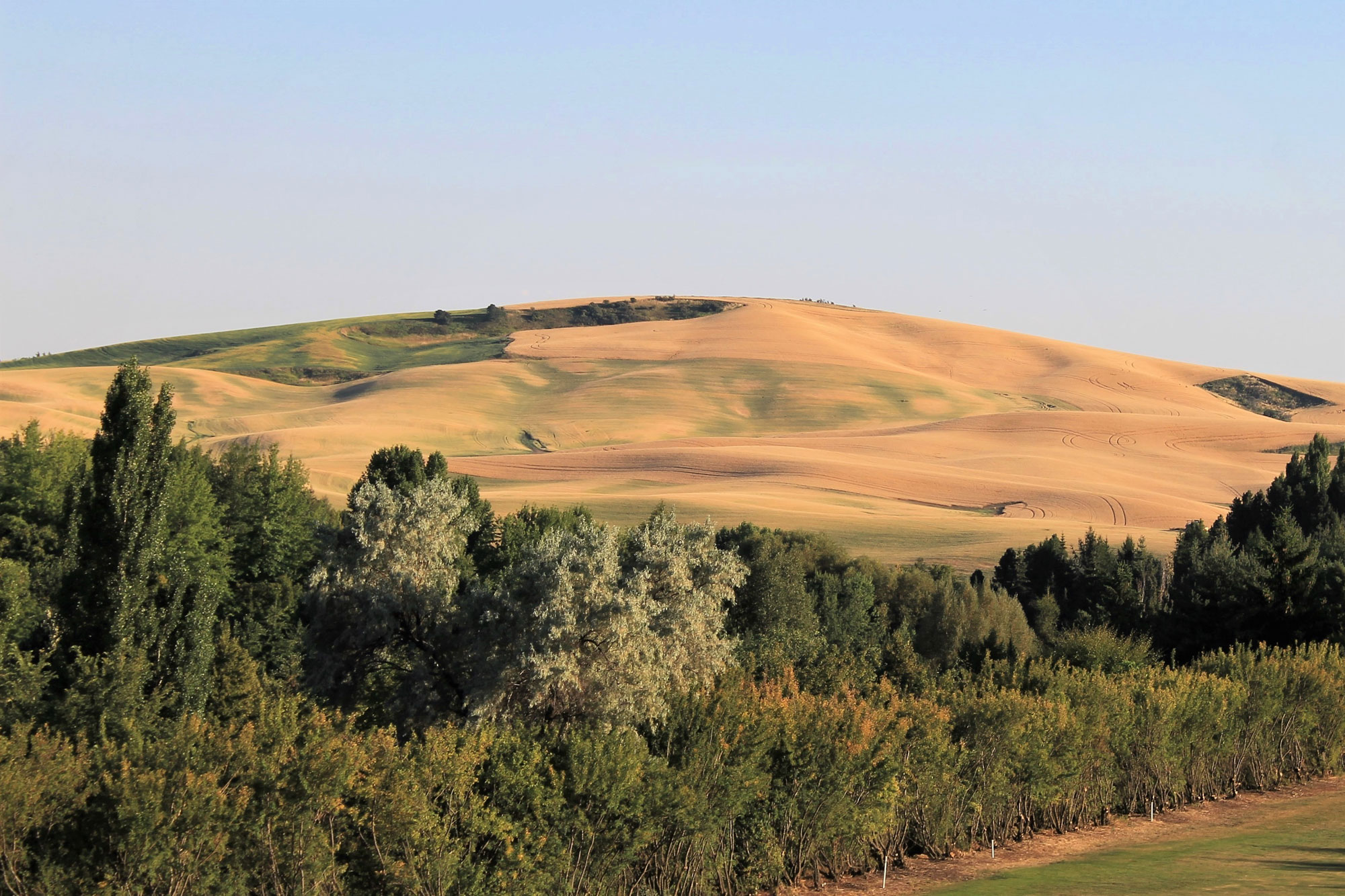 Strong winds blowing off of the ice sheet deposited sand, silt, and other glacial debris over the landscape to create relatively flat areas as well as forming hills and dunes. Sand dunes, formed where a supply of outwash sand was picked up and blown by the wind, include the Sandhills of Nebraska and Killpecker Sand Dunes in Wyoming. 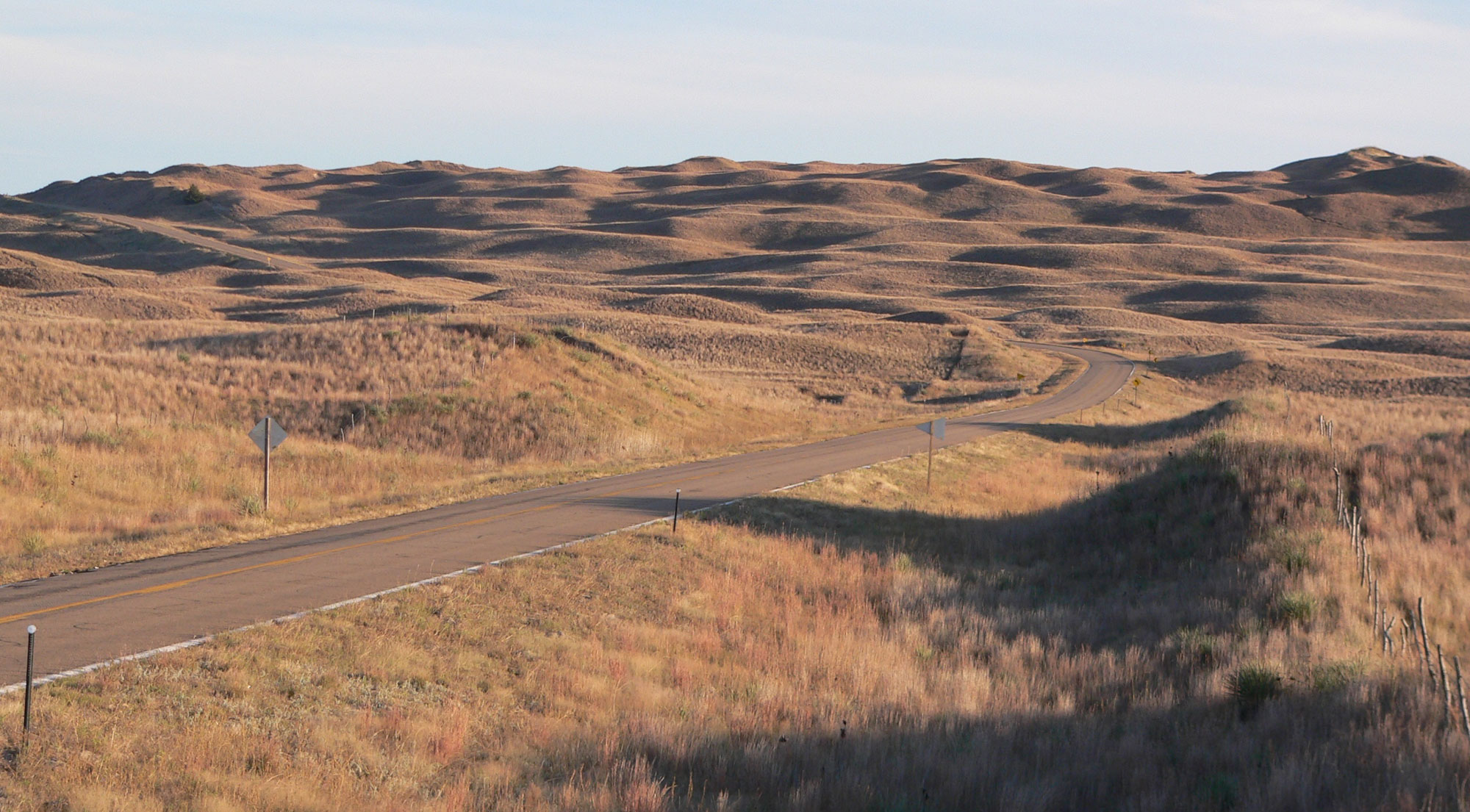 The drainage of rivers and streams was also changed by the Pleistocene glaciation. Prior to the ice age, North Dakota’s water—including the Missouri River—drained to the north, into Hudson Bay. During the ice age, glaciers created dams that diverted rivers to the south and formed lakes such as Glacial Lake Agassiz. This enormous lake, stretching from Saskatchewan down into Minnesota and eastern North Dakota, was formed by water that accumulated in front of the Laurentide Ice Sheet. Most of the area that is now eastern North Dakota would have been close to the shoreline of Lake Agassiz, and waves along its coastline modified the area. Today, the Red River Valley in North Dakota marks the extent to which Lake Agassiz covered the state. The James River Valley, extending from central North Dakota across South Dakota to the Mississippi River, was also carved by a lobe that extended from the ice sheet.

Drainage valleys of North Dakota. Left: Pre-glacial river valleys drained into the Hudson Bay. Center: Ice coverage and drainage during the Plesitocene. Water flowed along the margins of the ice to the south. Right: After the Pleistocene, the Missouri River flowed south through the channel created during glaciation Note that a few of the pre-glacial valleys became river valleys once more after the glaciers retreated. Map modified from a map by Wade Greenberg-Brand, originally published in The Teacher-Friendly Guide to the Earth Science of the Northwest Central US. 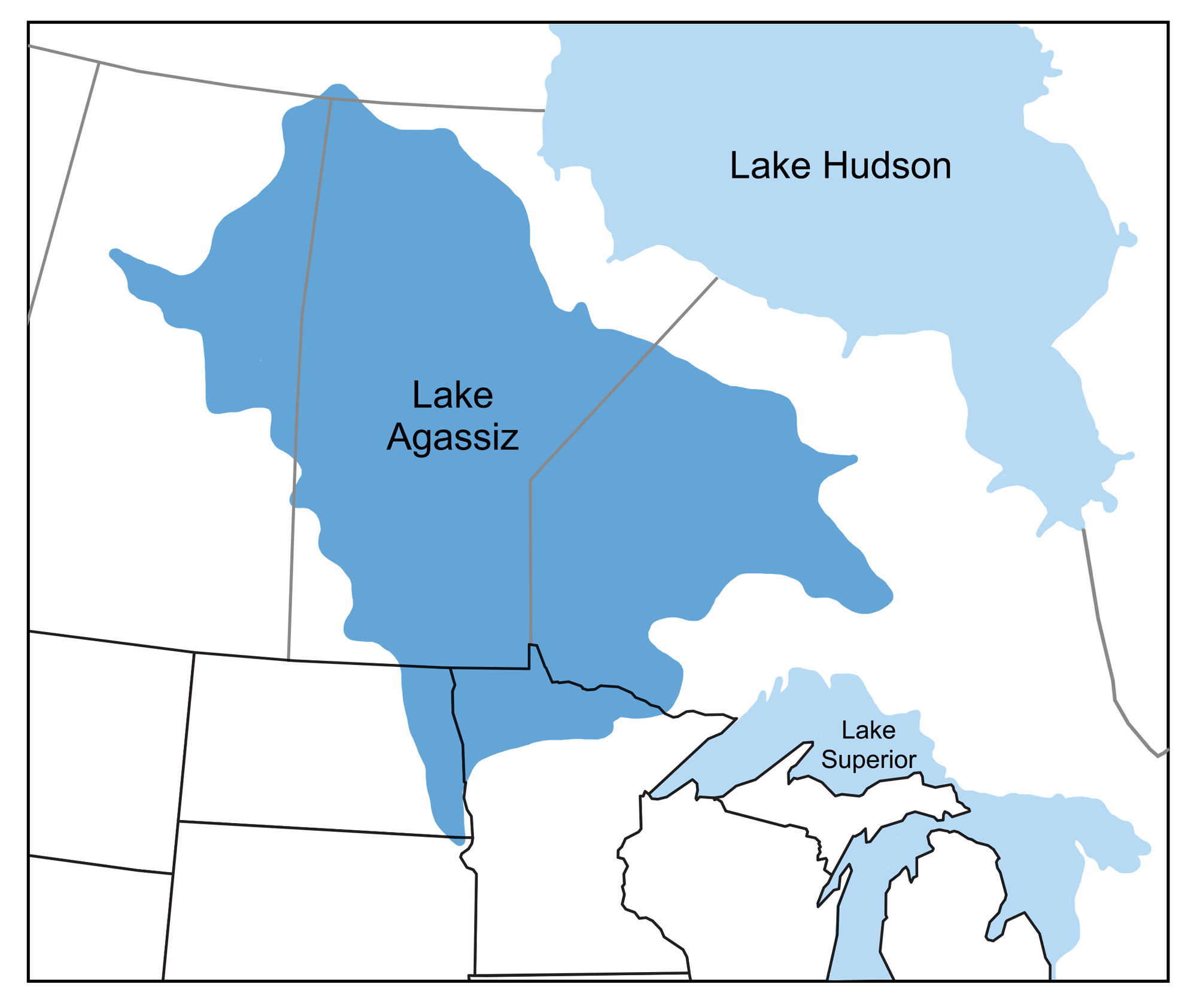 Map showing the extent of glacial Lake Agassiz. Map modified from a map by Wade Greenberg-Brand, originally published in The Teacher-Friendly Guide to the Earth Science of the Northwest Central US.

Glacial Lake Missoula, another massive glacial lake located in Montana, was created when the Clark Fork River in Idaho was dammed by ice over 610 meters (2000 feet) high. As the lake grew deeper and higher, waves eroded the ground along the shoreline, and water pressure against the ice dam increased, eventually causing catastrophic failure of the dam. Water flowed out of the dam at a calculated speed of 105 kilometers (65 miles) per hour, allowing the lake to drain in a few days. Along with water, ice and glacial debris were carried to the west as the lake drained. This event carved the Channeled Scablands, a barren, scoured landscape that extends from Idaho through Washington and Oregon. 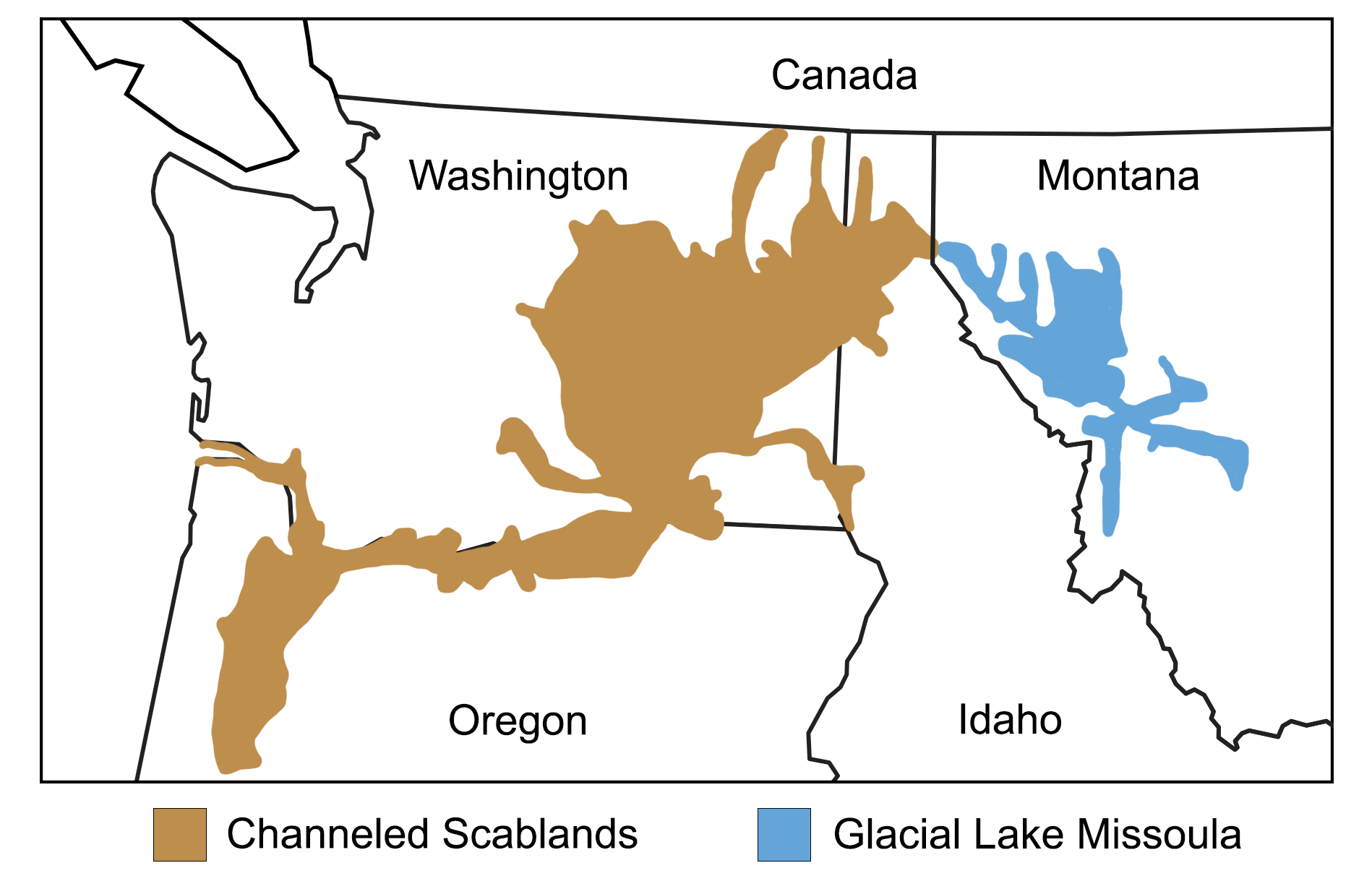 Map showing the extent of glacial Lake Missoula and the Channeled Scablands. Map modified from a map by Wade Greenberg-Brand, adapted from image by the Montana Natural History Center, originally published in The Teacher-Friendly Guide to the Earth Science of the Northwest Central US.

Today, the Great Salt Lake in Utah is the largest saltwater lake in the Western Hemisphere and the largest remnant of Lake Bonneville, a large, deep pluvial lake that covered much of western Utah during the Pleistocene. At its largest, the lake covered more than 82,000 km2 (32,000 square miles) and was about 1600 meters (5250 feet) deep.

Much of lake Bonneville emptied during a catastrophic megaflood that happened about 14,500 years ago. Around this time, the Bear River (a river in the Idaho-Utah-Wyoming border region) changed course and began flowing into Lake Bonneville. The water from the river caused the water in Lake Bonneville to rise until the lake overflowed at Red Rock Pass, Idaho. The overflowing lake quickly eroded a dam of loose sediment that once existed at Red Rock Pass, and the lake rapidly drained northward into the Snake River basin of southern Idaho. This flood may have created features like Shoshone Falls on the Snake River. 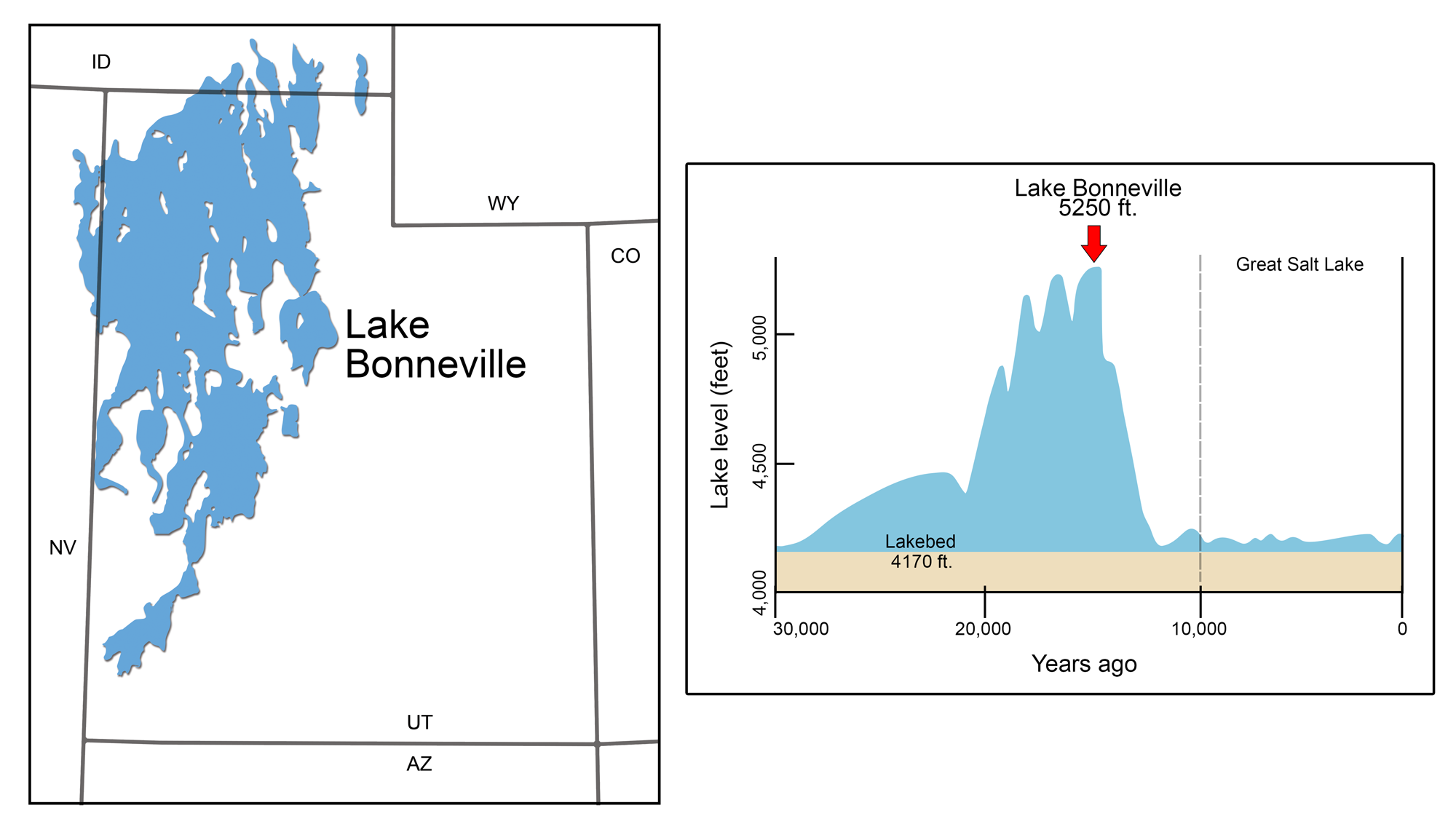 Pleistocene Lake Bonneville. Left: Lake Bonneville's maximal extent during the Pleistocene. Right: Graph of the lake's changing level over time. Modified from illustrations by Wade Greenberg-Brand originally published in The Teacher-Friendly Guide to the Earth Science of the Southwestern US. 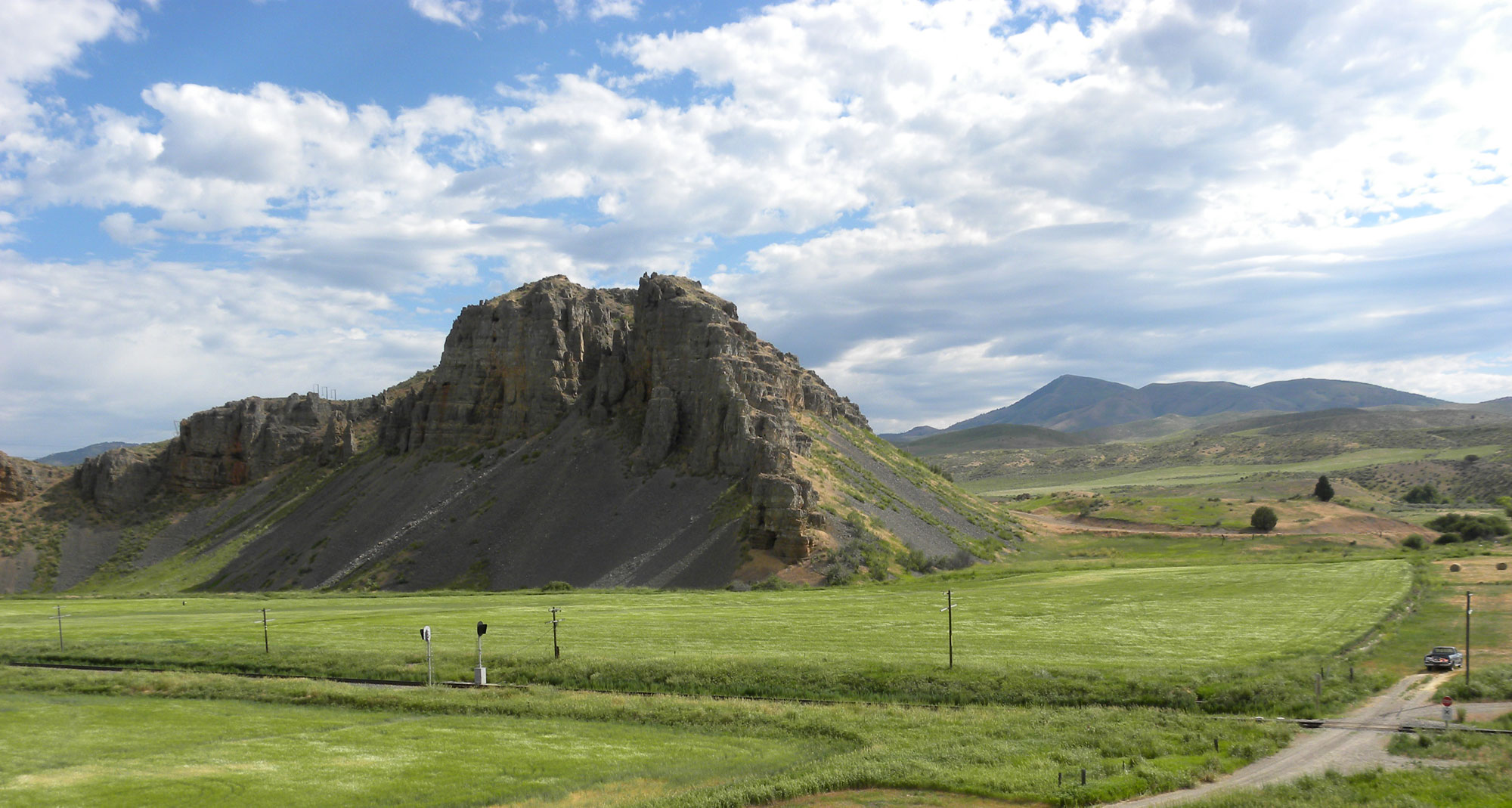 One of the hallmarks of alpine glaciers in the Northwest Central States is the rugged mountain terrain they carve. The stunning characteristics of the Rocky Mountains—from jagged peaks and bowls to glacial valleys and high meadows—are largely a result of glacial erosion and deposition during the Pleistocene. In several cases, these glaciers coalesced into ice caps covering entire mountain ranges. In other instances, they merged with advancing continental ice sheets, eventually becoming indistinguishable as separate glaciers, only to regain their distinctiveness as the ice sheets retreated. As these glaciers retreated, they not only exposed characteristic U-shaped valleys, but they also revealed a diverse collection of peaks, bowls, ridges, and lakes scraped into the bedrock.

For instance, in the Wind River Mountains of Wyoming, the Beartooth-Absaroka Range in Montana, and the Sawtooth Mountains of Idaho, glaciers have carved a series of horns, arêtes, and cirques. Below these prominent features, we often find chains of lakes that form when meltwater pools behind lateral and terminal moraines. Likewise, in and around Yellowstone National Park and the Teton Mountains of Wyoming, a network of small Pleistocene glaciers merged like streams flowing into a large river. As the glaciers retreated, they left behind a collection of smaller U-shaped valleys (known as hanging valleys) that drop abruptly into a much larger valley. This phenomenon is responsible for the formation of spectacular waterfalls like Tower Fall. 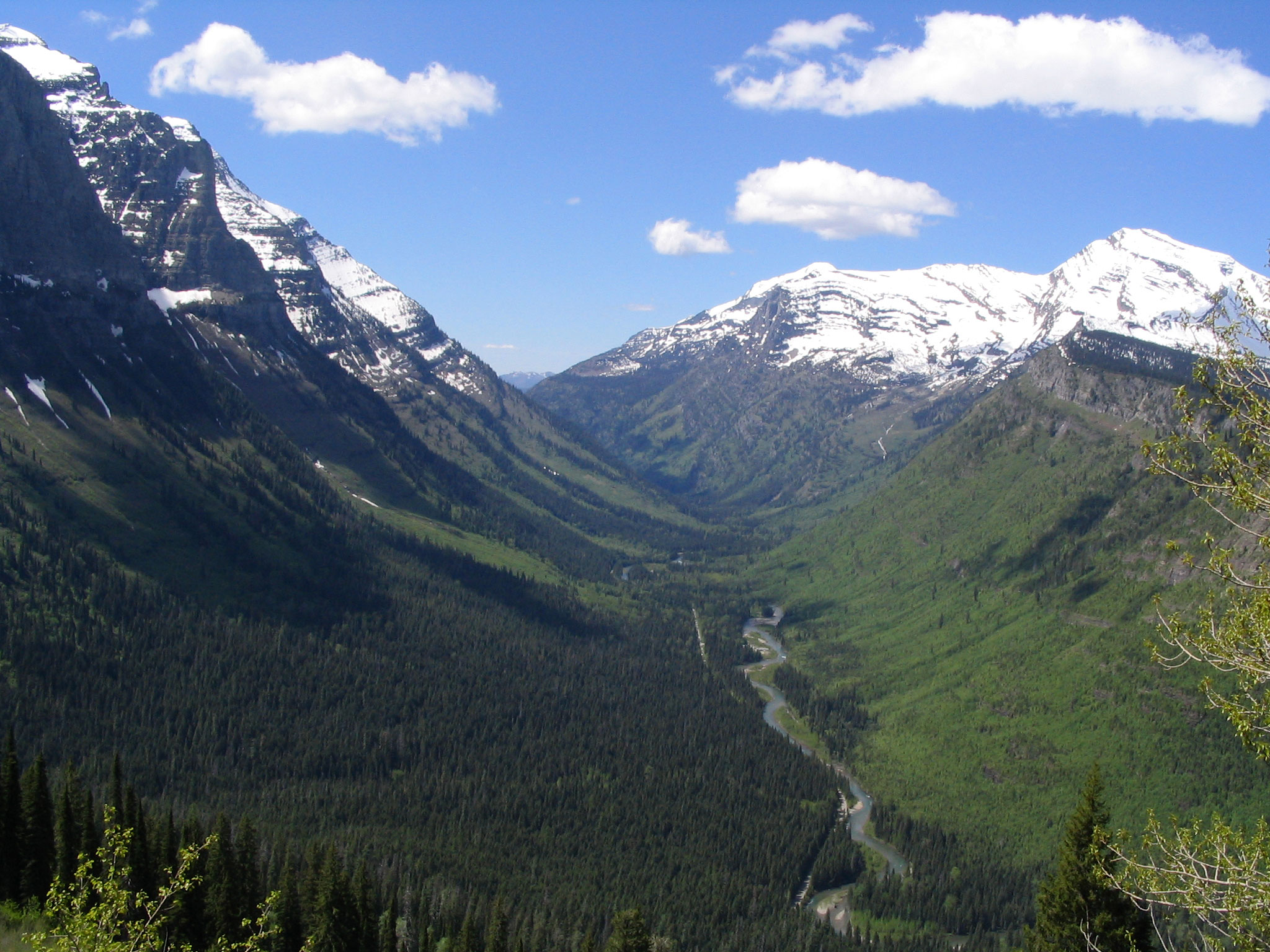 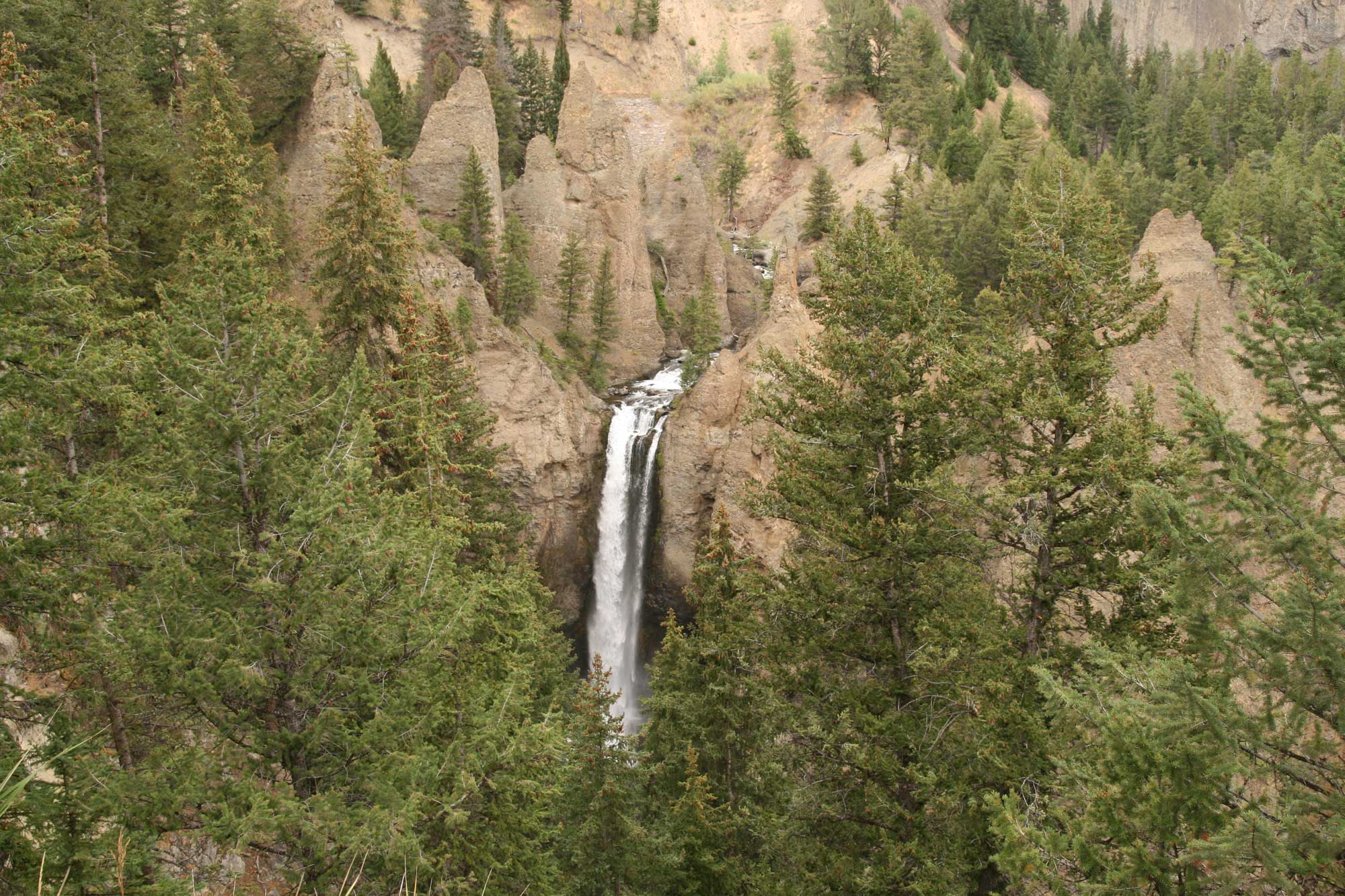 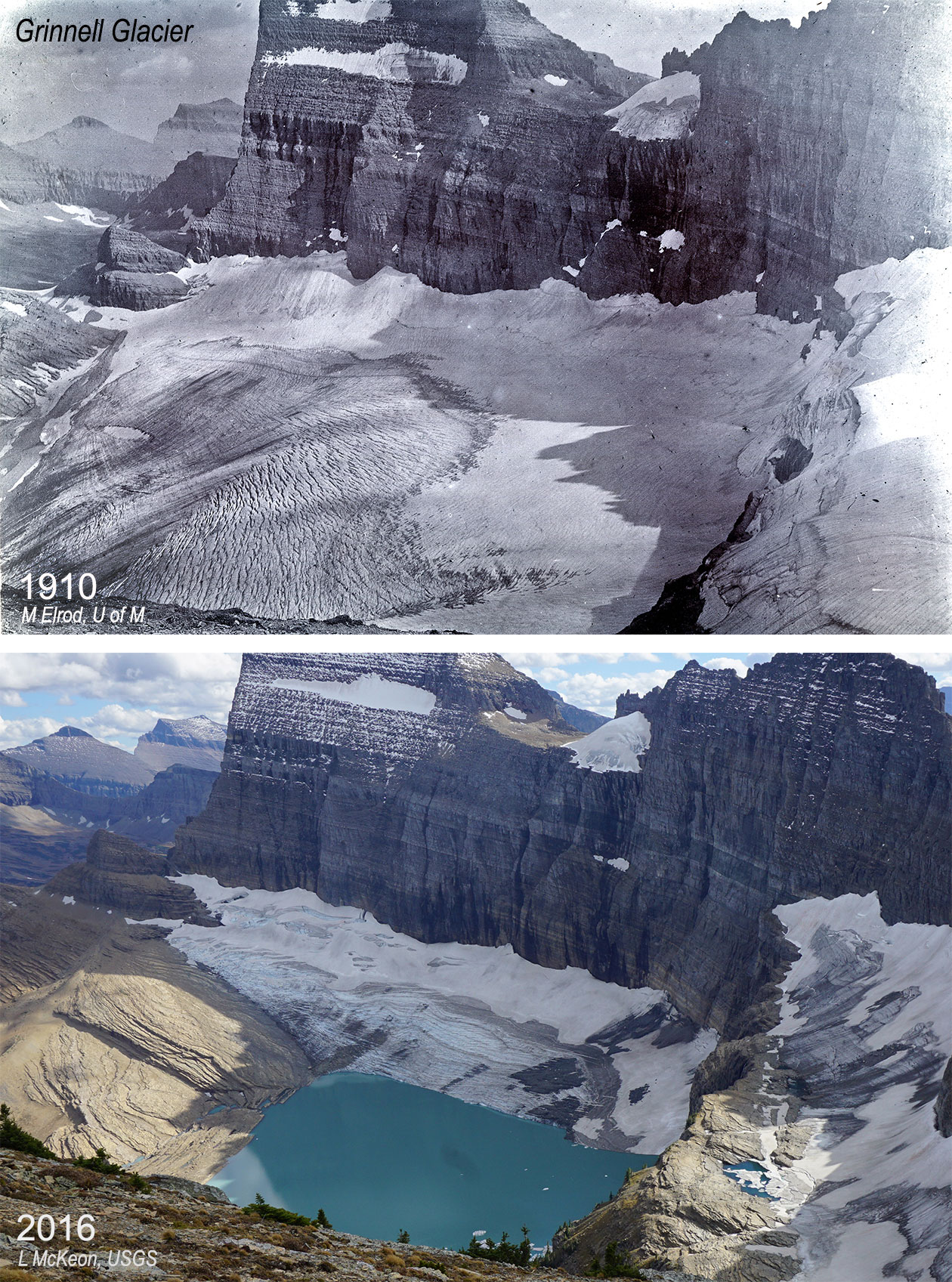 Grinnell Glacier at two points in time, 1910 and 2016. The melting of the glacier has formed Upper Grinnell Lake. Photo source: USGS (public domain).