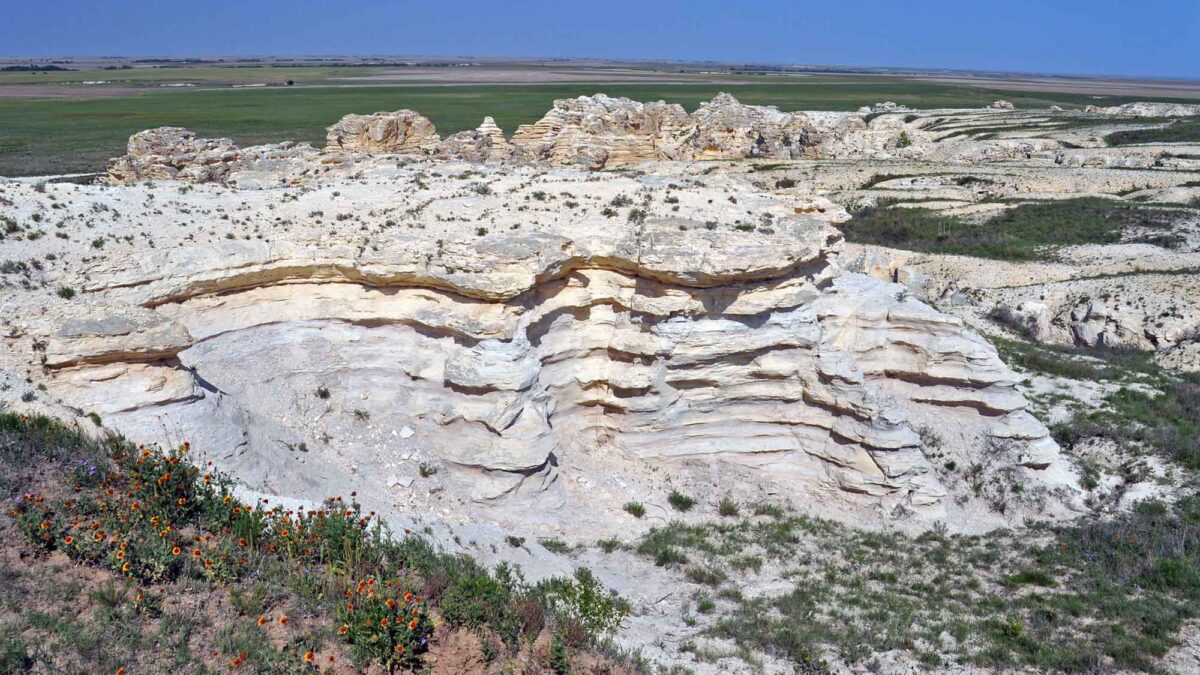 Snapshot: Overview of the topography of the Great Plains region of the South-Central United States, including portions of Kansas, Oklahoma, and Texas. 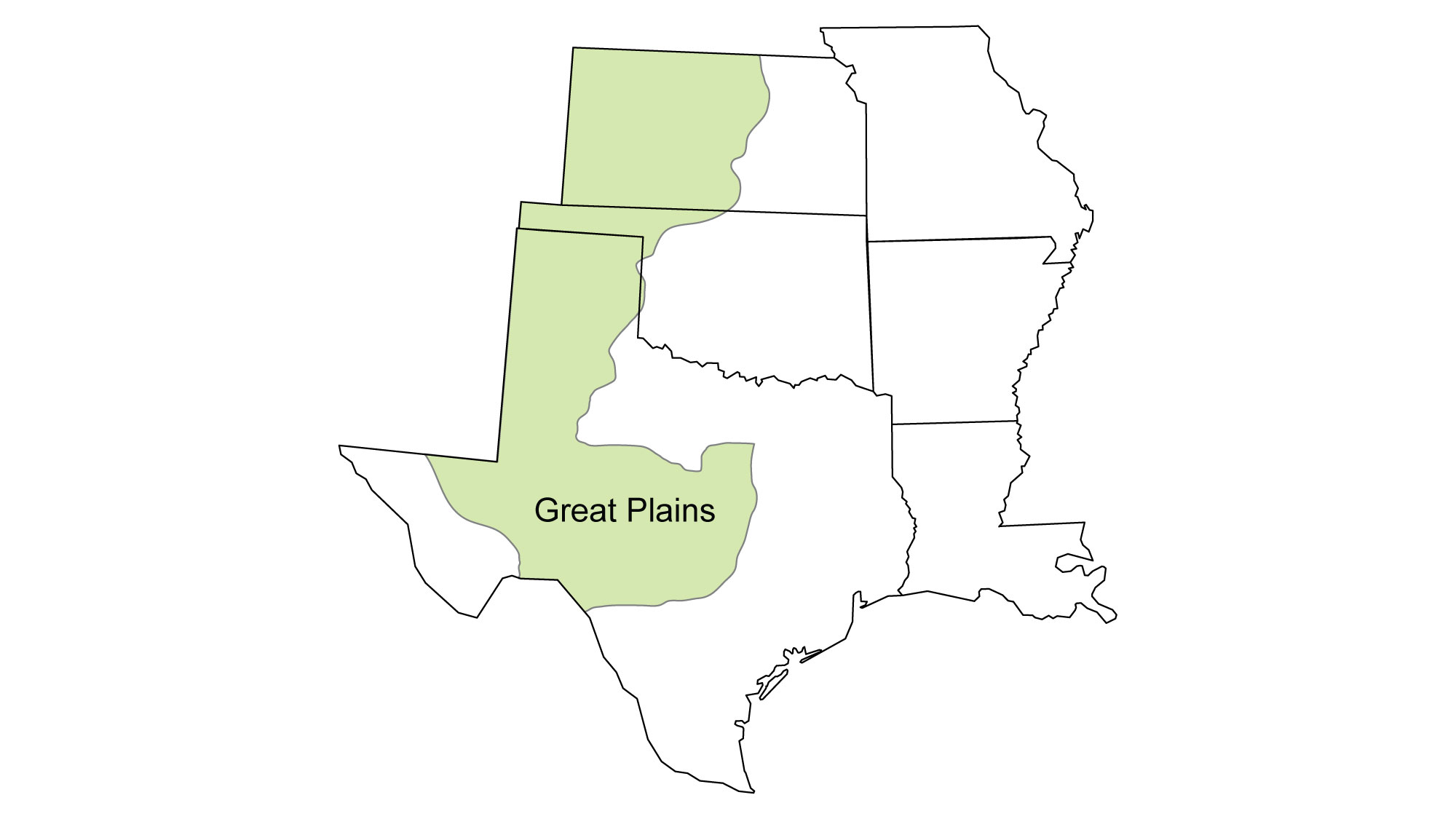 The Great Plains region is a product of two earlier geologic events: the presence of the Western Interior Seaway during the Cretaceous, and the onset of the Laramide Orogeny during the late Cretaceous and early Paleogene. The Western Interior Seaway retreated thanks in part to uplift that occurred during the formation of the Rocky Mountains; the flat floor of this former sea, left exposed after it receded, provided the basis for the topography of the Interior Plains. These marine rocks are only found at depth beneath today’s Great Plains, buried by an overlying sequence of rocks deposited by streams, wind, and glaciers during the Cenozoic era. The Rocky Mountains continued to rise, and volcanic activity increased around 50 million years ago, providing large quantities of sediment that were transported and deposited across the Interior Plains.

Extending southward from western Kansas into Texas, the Great Plains represent one of the largest regions of the South Central, second only to the Coastal Plain. Across this expanse, the region’s topography is rather diverse, and can be divided into five distinct areas: the Central Texas Uplift, High Plains, Pecos Valley, Edwards Plateau, and the Plains Border. 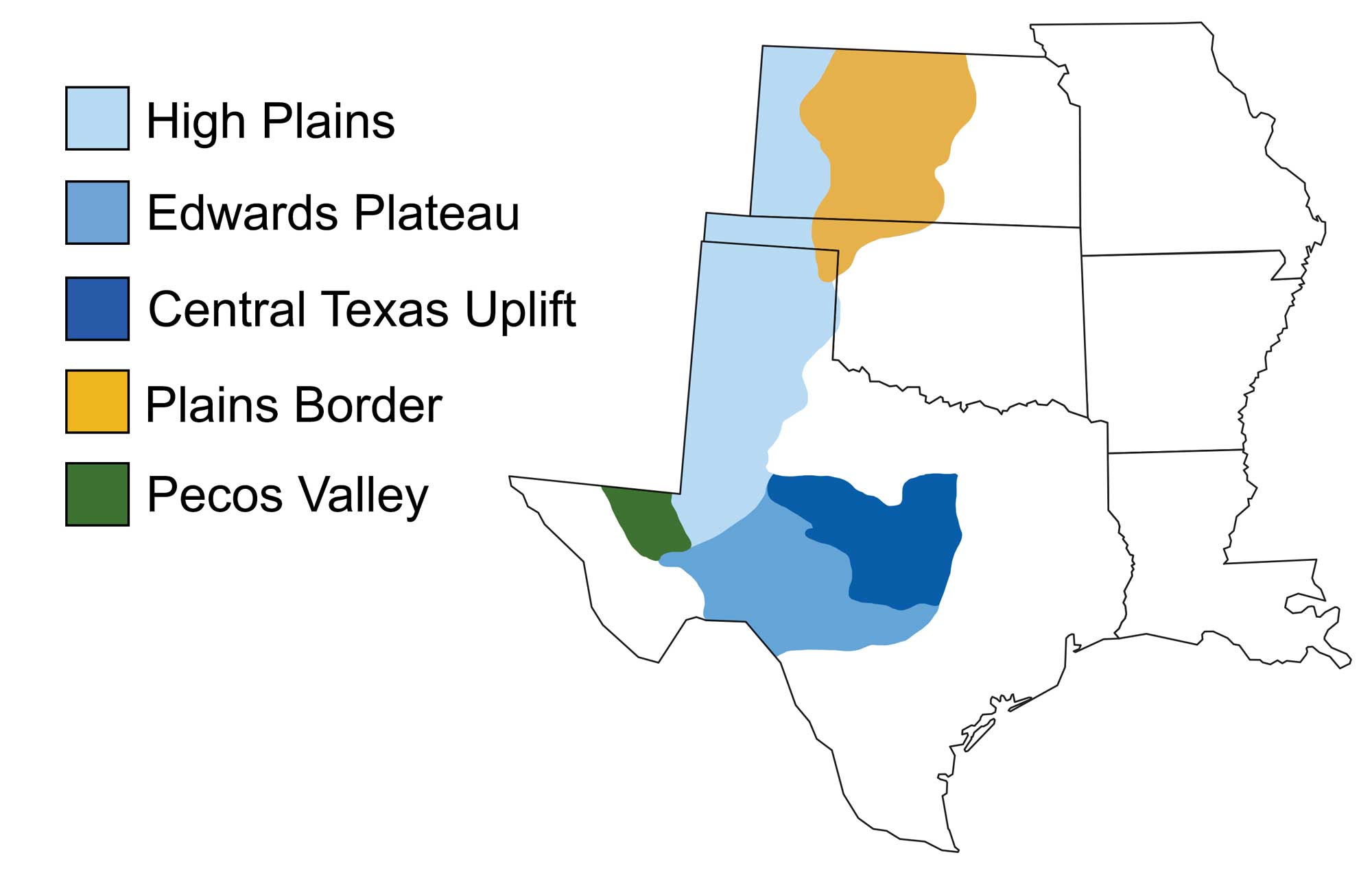 Uplift of this mountainous portion of the Great Plains began as the continental interior was raised during the Western Interior Seaway’s retreat at the close of the Cretaceous period, some 65 million years ago. The uplift is a dome ofPrecambrian rock—a body of granite surrounded by a ring of metamorphic gneiss and schist that formed between 1.3 and 1 billion years ago.

Since its formation, weathering and erosion from streams have led to the landforms visible in the uplift today. Enchanted Rock is perhaps the area’s most spectacular feature. This granitic dome extends 130 meters (425 feet) above the surrounding terrain, and it is visible for miles from the surrounding basin. 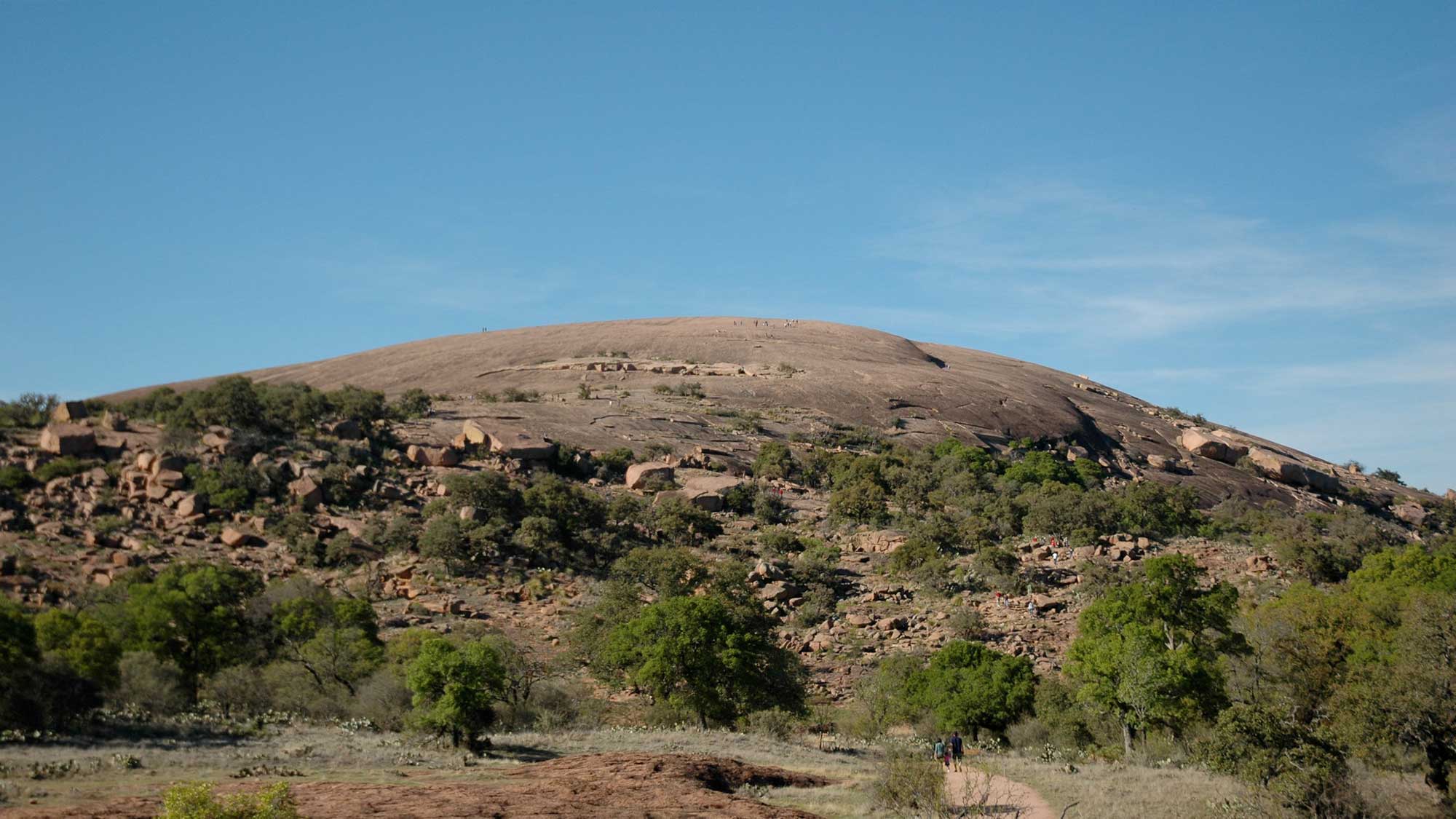 The High Plains represents the largest area of the South Central’s Great Plains, and it is composed of sediments that originated in the Rocky Mountains to the west. Water and wind flowing from the high mountains carried loose sediment— gravel, sand, silt, and mud—eastward. This mass of eroded material eventually filled stream valleys and covered hills, creating a massive, gently sloping plain that was in place by five million years ago—meaning these sediments are quite young on the scale of geologic time. Because the sediment was carried in an eastward direction, the coarsest sediments are found farther to the west, while finer strata are observed in the east. Today, the area stands as a little- modified, five-million-year- old depositional surface. The Ogallala Formation, a unit of unconsolidated sands, gravels, and clays, caps the High Plains and is a major aquifer for much of the region. As one of the world’s largest aquifers, it supplies drinking water to over two million people. 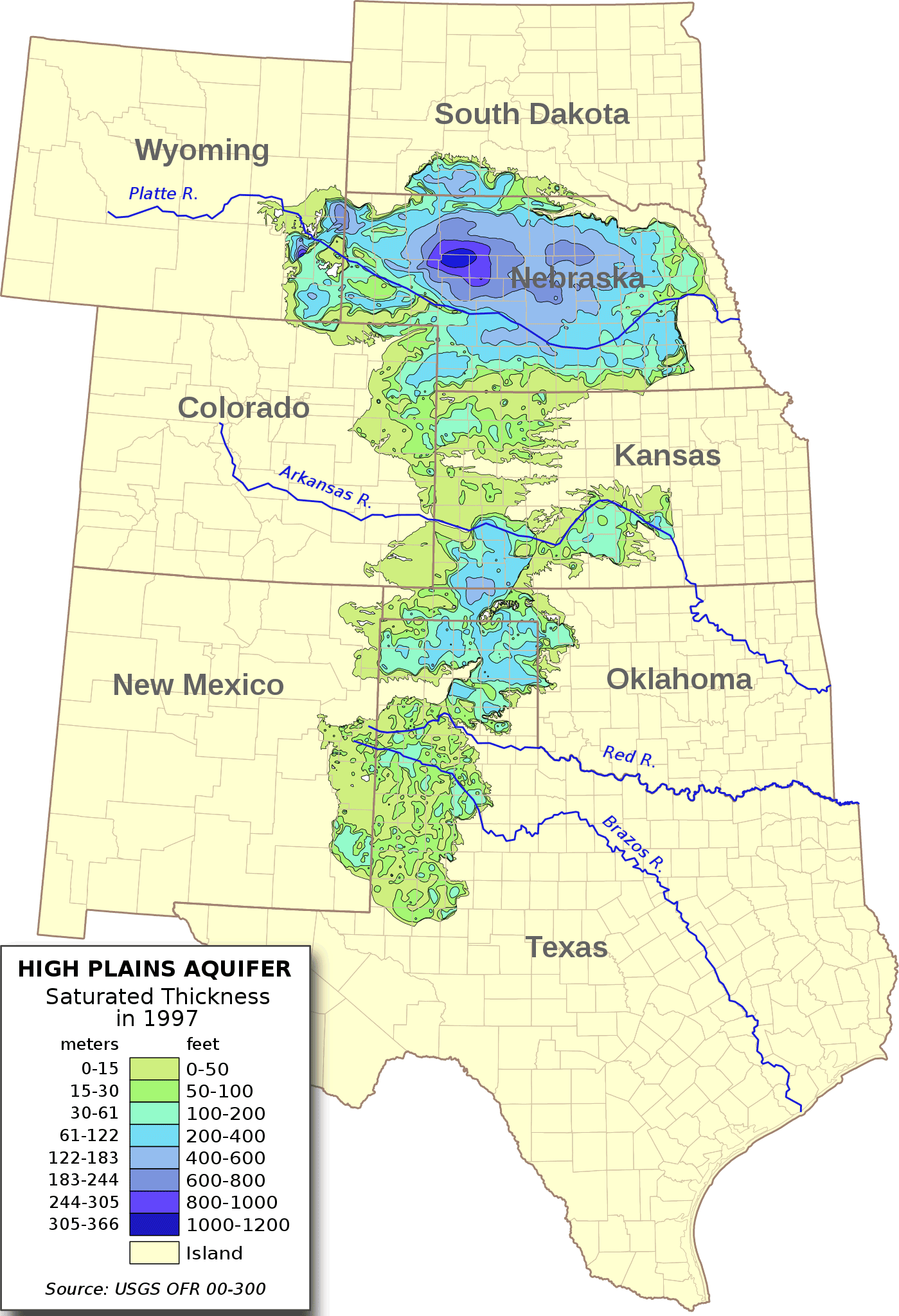 Extent of the Ogallala aquifer and its saturated thickness as measured in 1997. Image by "Kbh3rd" (Wikimedia Commons; Creative Commons Attribution-ShareAlike 3.0 Unported).

In Texas, the High Plains forms a broad mesa, bounded by steep escarpments that separate it from the lowlands to the east and west. Rivers that run over the edges of these escarpments have eroded the landscape, leading to the formation of dramatic gorges such as the Palo Duro Canyon.

The second largest canyon in the United States, its walls expose strata from the Permian red beds of the Quartermaster Formation up to the Cenozoic caprock of the Ogallala Formation. The canyon is roughly 110 kilometers (70 miles) long, has an average width of 10 kilometers (6 miles), and an average depth of 250 meters (820 feet).

Exposed across just a small area within the South Central U.S., the Pecos River Valley is a broad valley formed by erosion, driven by the Pecos River. 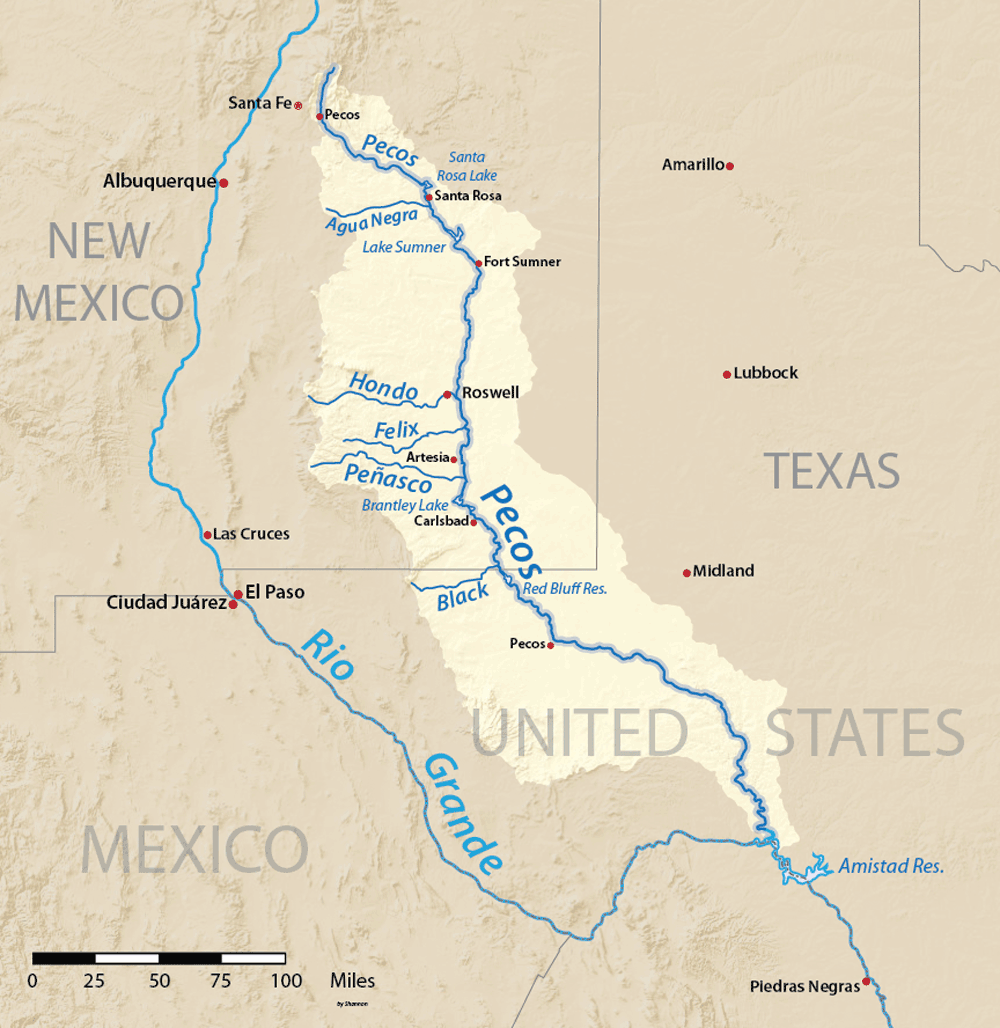 The development of the north-south Pecos diverted the original east-west streams that deposited the Ogallala Formation; therefore, the Great Plains no longer receives sediment from the western highlands to replenish the topsoil.

The Pecos Valley follows the river from elevations of more than 4000 meters (13,000 feet) in the Sangre de Cristo Mountains of New Mexico, southward through grassland and desert to the Edwards Plateau before finally emptying into the Rio Grande through a vast gorge. To the east, the Ogallala Formation of the High Plains forms a rim rock at the top of the Mescalero Escarpment; to the West lies Texas’ Basin and Range region.

As the Pecos River continues south of the Pecos Valley, it enters the Edwards Plateau. This area consists primarily of limestone that was deposited in the inland sea during the Cretaceous. Because it weathers easily in the presence of water, the plateau’s limestone forms a very diverse landscape today. The Pecos River cuts 120 to 150 meters (400 to 500 feet) below the level of the plateau’s surface, while the Devils, West Nueces, and Nueces rivers cut similarly through the plateau to the east. The plateau’s southeastern edge is formed by the Balcones Escarpment.

In the northeast, karst topography is prominent; sinkholes dot the plateau’s surface, often connecting to caverns that formed below due to the action of groundwater. One example is Devil’s Sinkhole, an enormous vertical shaft (15 meters [50 feet] wide at the surface) that drops 45 meters (140 feet) into a huge, 95-meter-wide (320-foot-wide) limestone cavern.

Like the Edwards Plateau, the Plains Border is an area shaped by water. Here, many east-west river valleys cut through and shape the landscape. In the north-central section of Kansas, known as the Smoky Hills, rivers have cut several hundred meters (yards) through the High Plains strata to expose Cretaceous-aged marine deposits of sandstone, limestone, and chalk. As a result of the dissolution of salt and gypsum beneath the surface, sinks and collapses are also found within this area. 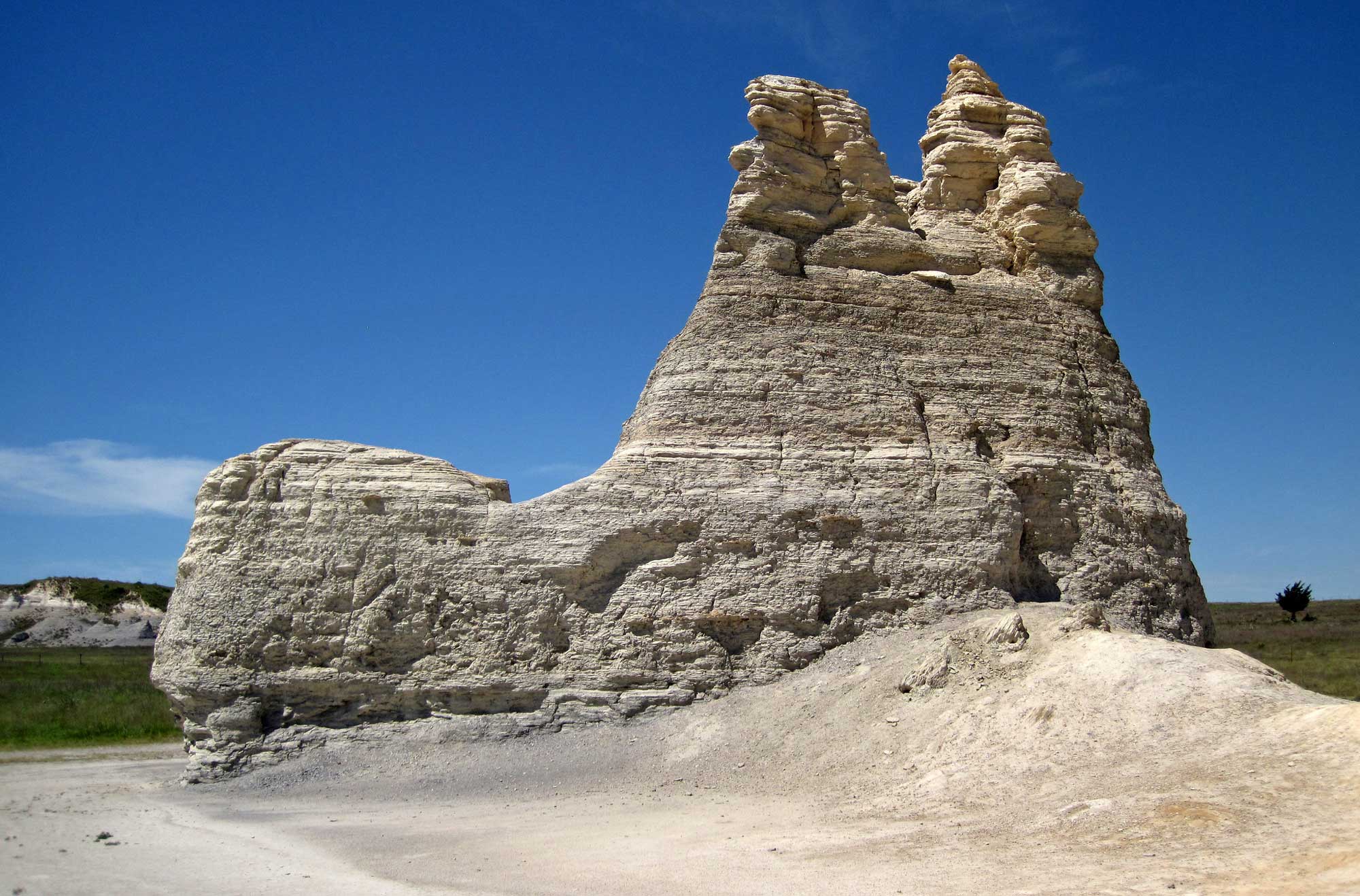