The Ediacaran biota is an assemblage of fossils, first described from southern Australia and subsequently worldwide, that dates to just before the beginning of the Cambrian (541–485 million years ago). Although the evolutionary affinities of the Ediacara organisms have been controversial, it is widely accepted that they include some of the earliest-known fossil animals. Ediacara fossils include a range of forms, including enigmatic centimeter to meter-long fronds, disks, and other shapes, as well as some that generally resemble modern animal groups. All appear to have been soft-bodied (i.e., lacking mineralized skeletons). None show evidence of appendages or sensory structures, and most show no sign of feeding, digestive, or locomotory structures. Scientists do not know whether they are all related to each other, or represent several branches of the evolutionary tree. Nevertheless, the Ediacaran biota is an extremely important piece of the story of how and when complex animal life evolved during the late Precambrian and Cambrian Explosion. It is therefore especially noteworthy that the Southeast has produced Ediacaran fossils.

A diorama depicting life in the Ediacaran sea. Photograph by Jonathan R. Hendricks. Explore an interactive version of this diorama on Sketchfab.

The rocks of the Blue Ridge and Piedmont are largely metamorphic and igneous, although many of them were initially sedimentary and may have contained fossils. Remarkably, a few fossils managed to escape the destructive heat and pressure of metamorphism. The oldest known fossils in the Southeast come from Stanly County in North Carolina, where in the early 1970s, a man found what looked like a trilobite (learn more) in one of the rocks he was using to build a chimney. It turned out to be not a trilobite, but a fossil from the Ediacara biota. A small number of additional Ediacaran-type fossils have been found in similar rocks in Stanly County. All of these rocks appear to date to between 542 and 556 Ma, putting them just before the Cambrian Explosion, making these fossils among the youngest representatives of the Ediacara biota in the world. 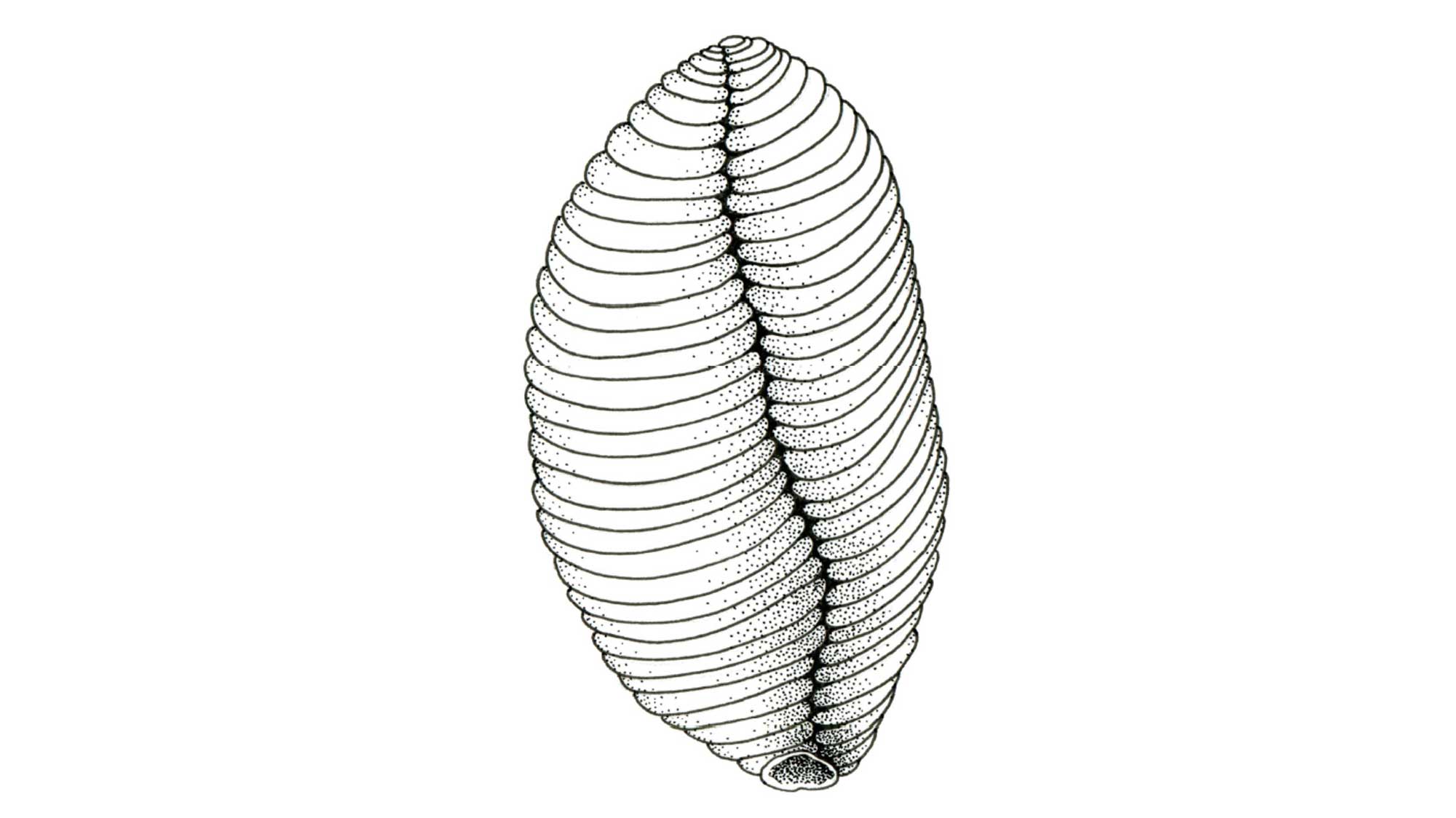 Cambrian rocks are not widespread in the Southeast (as they are, for example, in parts of the Western US), but some Cambrian sediments exposed in the southern Appalachians do contain well-preserved fossils. For example, archaeocyathans (learn more) are found in metamorphosed early Cambrian carbonate rocks (marbles) in the Talladega Slate Belt of northeastern Alabama and northwest Georgia. Several species of middle Cambrian trilobites occur in rocks that are part of the Carolina Slate Belt. For example, trilobites from the Asbill Pond Formation near Batesburg (Lexington County), South Carolina are similar to trilobites from ancient paleocontinents that geologists call Armorica and Baltica (modern western and central Europe), but bear little similarity to the fossils of Laurentia (modern North America and western Europe). 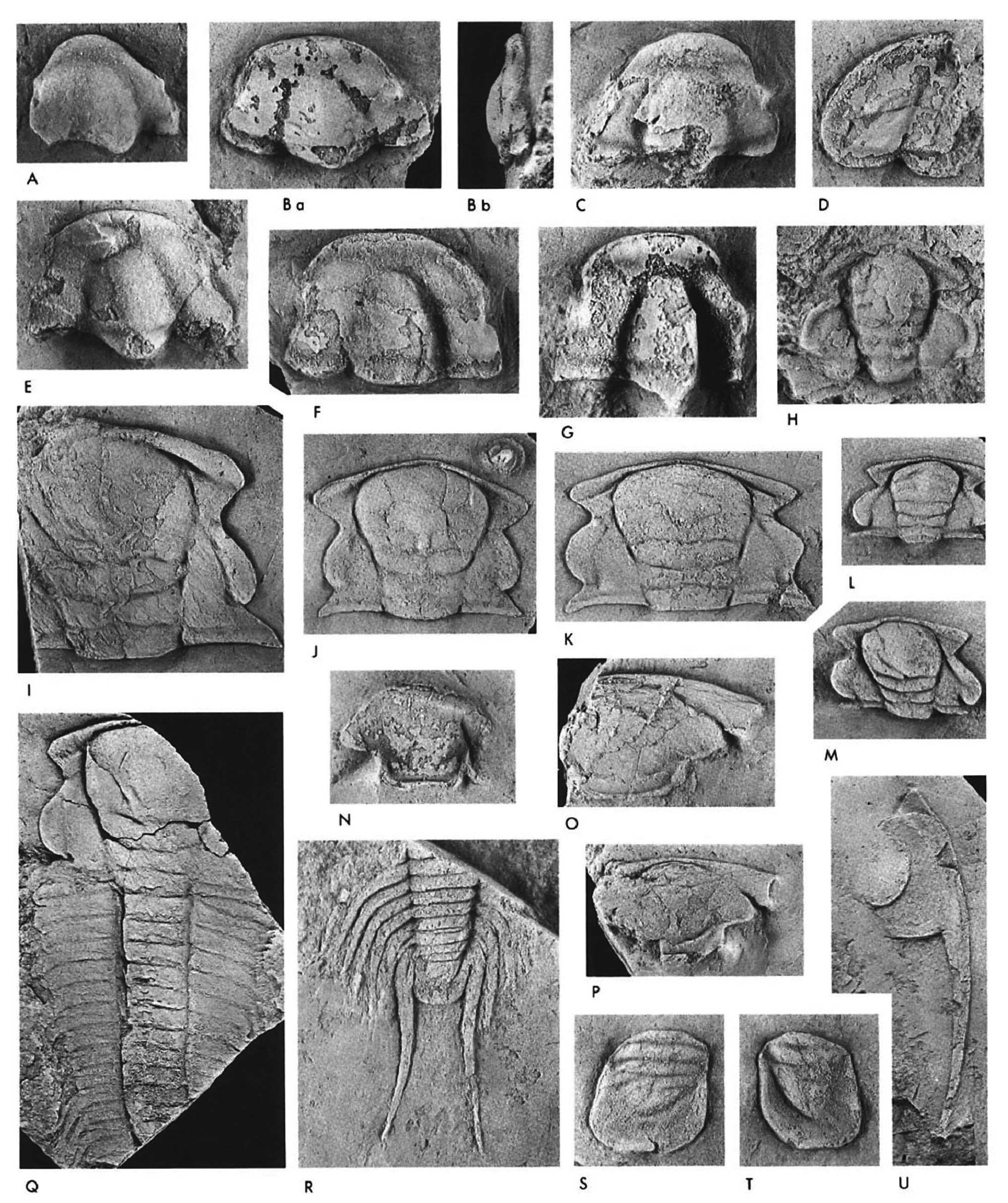 This peculiar fossil distribution is compatible with the Carolina Slate Belt's history as an exotic terrane that was added to North America during the early to middle Paleozoic. Almost all younger Paleozoic rocks in the Piedmont are metamorphic, and fossils are uncommon in them. In some places, such as Buckingham County, Virginia, fossils are found that were deformed by the tectonic forces of mountain building long after they had been buried. 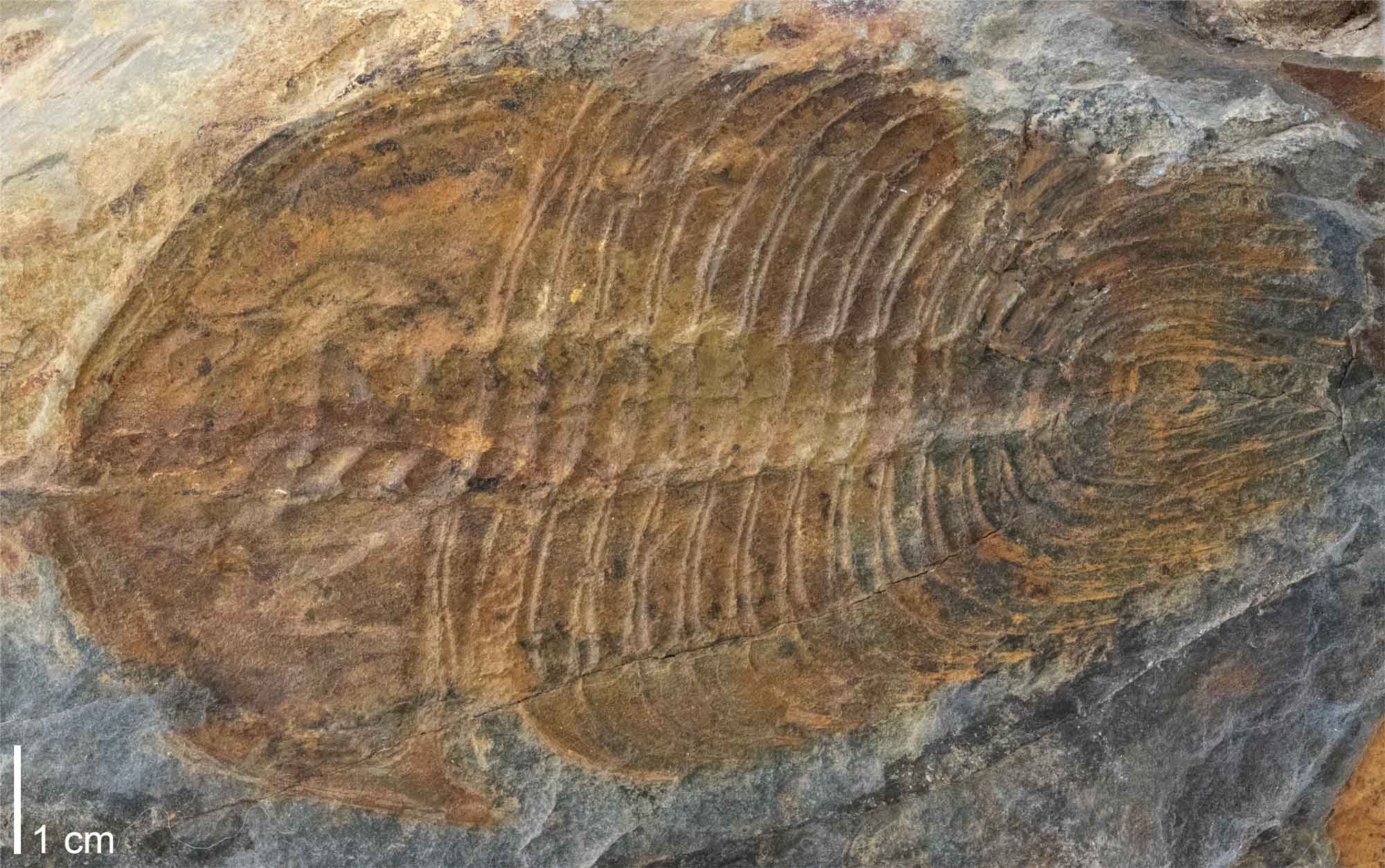 A Cambrian trilobite, Wanneria walcottana, deformed by mountain building. This particular specimen is from the Kinzers Formation of Pennsylvania (PRI 76846). A 3D model of this specimen is available to view on Sketchfab. Specimen is from the collections of the Paleontological Research Institution, Ithaca, New York.

The Triassic-Jurassic rift basin rocks of the Piedmont formed after the Paleozoic orogenies had ended and the Atlantic Ocean began to widen. Lakes were common in these basins. Sediments deposited in and around the lakes—part of what geologists call the Newark Supergroup—contain fossils that record freshwater environments as well as terrestrial habitats along lake margins. The most common fossils are fishes, plant remains, and the footprints (trace fossils) of reptiles and amphibians.

Trace fossils are marks left by the behavior of organisms on sediment or other substrate. Traces include burrows, footprints, tooth marks, holes drilled in shells by predators, and the tunnels left by plant roots. Because paleontologists can almost never be sure of exactly which kind of organism made a particular trace, there is a completely separate system of naming trace fossils that does not refer to organisms represented by body fossils. Despite this difficulty, trace fossils are widely used to help reconstruct ancient environments. The Triassic-Jurassic rift basins of the East Coast have been renowned for their dinosaur trackways since the early nineteenth century, and the basins of North Carolina and Virginia do not disappoint in this respect (see examples here of Triassic dinosaur footprints at the Luck Stone quarry in Culpepper, Virginia). The tracks and skeletal fossils of crocodilians and the small reptile Tanytrachelos are also well documented from other sites, including the famous Solite Quarry near the Virginia-North Carolina state line (see images of fossils from the Solite Quarry on Flickr). 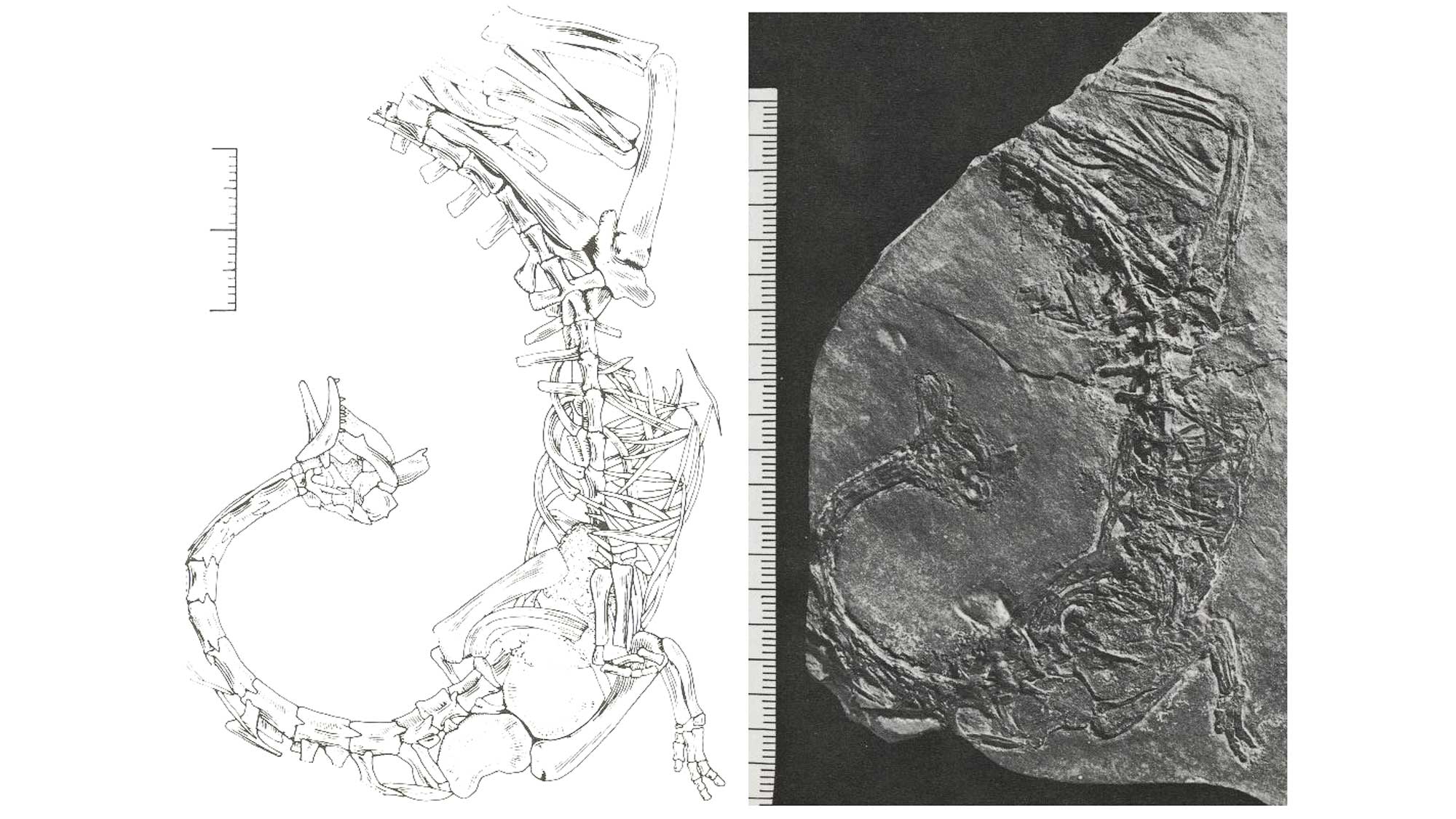 Drawing (left) and photograph (right) of the type specimen of Tanytrachelos ahynis (YPM 7496), a small, Late Triassic reptile that was approximately 13 cm (5 in) long. Images is modified from fig. 2 from Olsson (1979) in Postilla via Biodiversity Heritage Library; copyright Yale Peabody Museum of Natural History and reproduced here in accordance with a Creative Commons Attribution-NonCommercial-ShareAlike 3.0 Unported license.

The rift valley lakes also contained abundant fish, as we know from numerous fossils found in rocks that formed from lake bottom sediments. Many of these fossils are from an extinct group armored with thick bony scales.

Fossil invertebrates in the Newark Supergroup rocks include clams, crustaceans, and abundant insects, many of which include soft tissue and delicate features (e.g., wings and antennae).

These fragile organisms may have been so well preserved thanks to poorly oxygenated lake bottom waters that slowed decomposition, or because of saline and alkaline water chemistry, which may have discouraged predators and bioturbation (burrowing) that otherwise would have contributed to deterioration of the body parts. Plant remains can also be particularly abundant in these rift valley sediments, and include a variety of foliage types such as cycad fronds, ferns, ginkgos, and conifers.