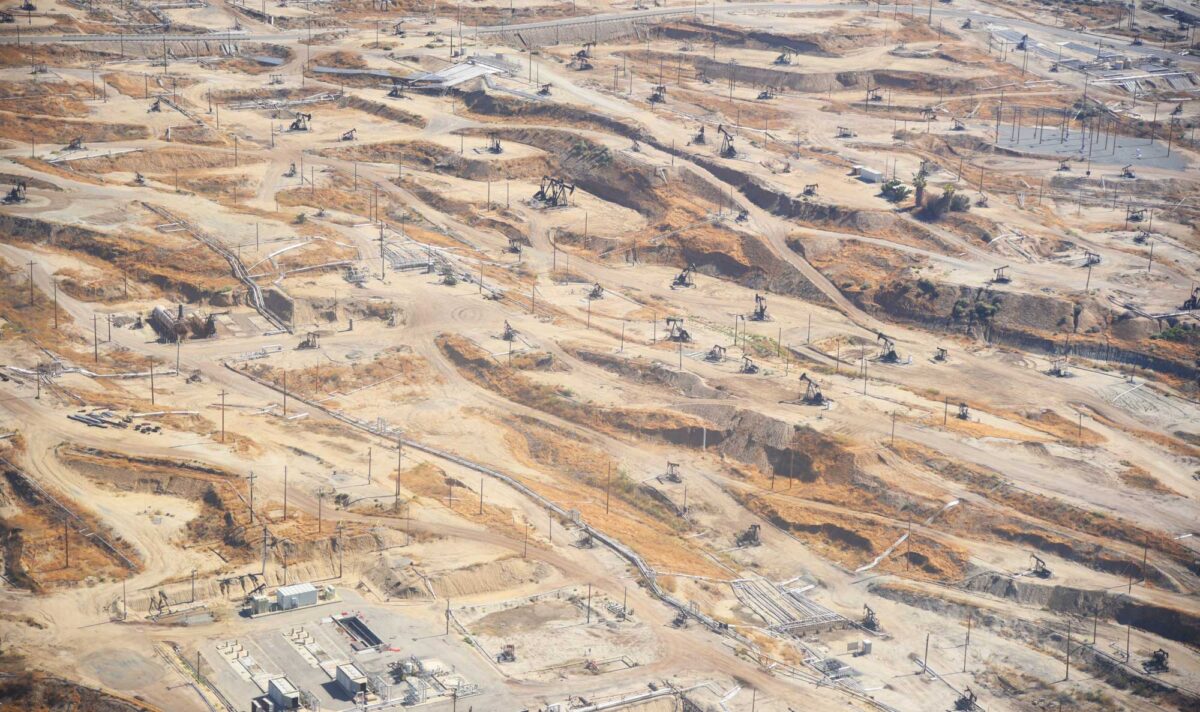 Credits: Some of the text of this page comes from "Energy in the western US" by Carlyn S. Buckler and Gary Lewis, chapter 7 in The Teacher-Friendly Guide to the Earth Science of the Western US, edited by Mark D. Lucas, Robert M. Ross, and Andrielle N. Swaby (published in 2014 by the Paleontological Research Institution; currently out of print). The book was adapted for the web by Elizabeth J. Hermsen and Jonathan R. Hendricks in 2022. Changes include formatting and revisions and additions to the text and images. Credits for individual images are given in figure captions.

These tall mountain ranges provide perfect opportunities for hydroelectric power. There are hundreds of hydroelectric power plants throughout the region, which provide the area with a majority of this renewable energy. Much of this region is managed wood forest, and several wood-burning power generation plants also provide power. Wind, biomass, and several solar power plants round out the energy production profile for the region. 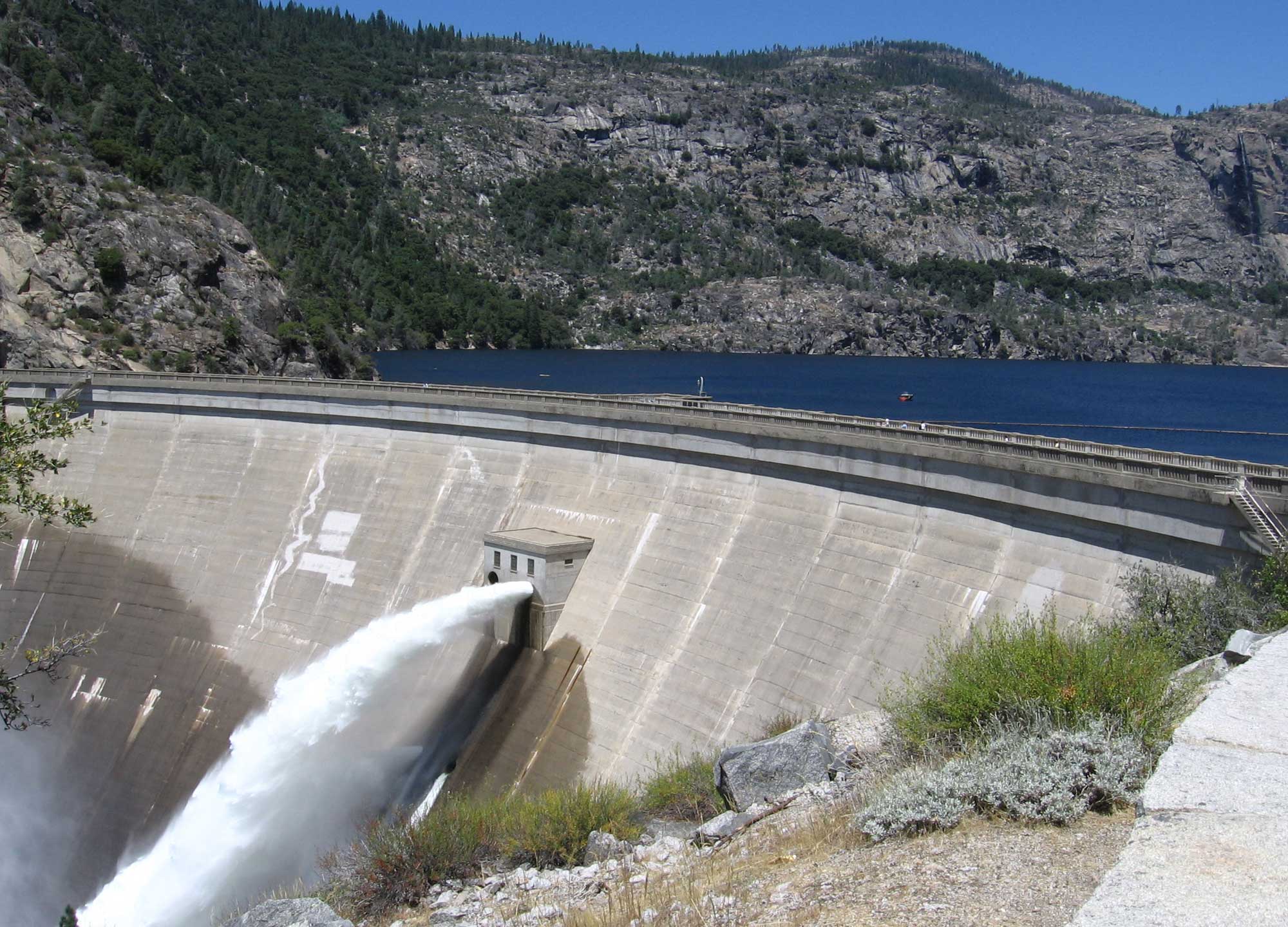 Coastal California has long been a resource for the extraction, export, import, and refining of oil and gas, with the ports of Long Beach, Los Angeles, and San Francisco being the main hubs. Ranking third in the nation for crude oil production, refineries and terminal storage facilities dot the area. With the “car culture” and lack of public transportation in most of California, the demand for and flow of oil has continued unabated over the last century. 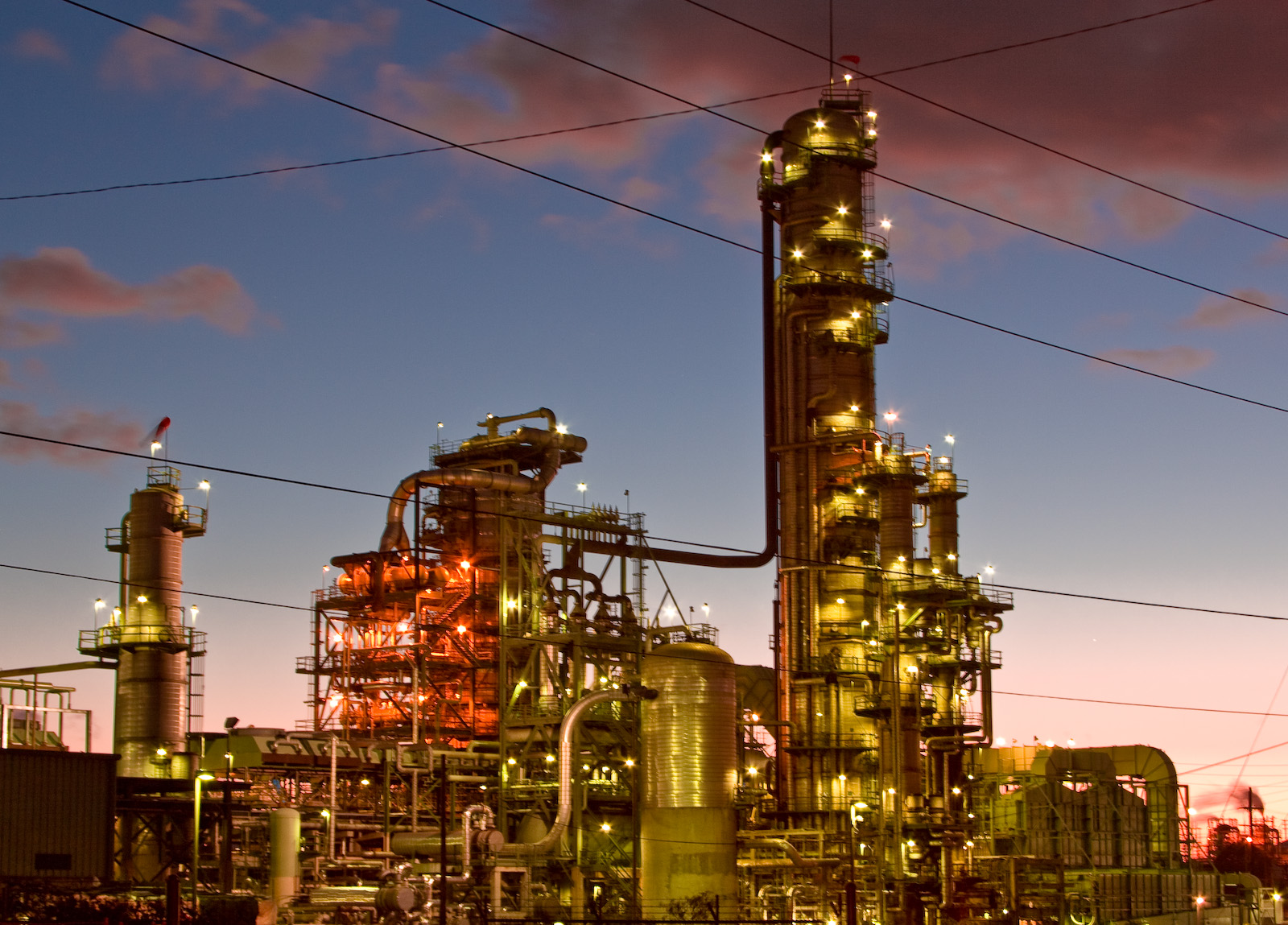 California’s vast oil production is the result of several large sedimentary basins, complex geology creating significant traps, and, more recently, the development of large offshore oil fields. The source of most of California’s oil is sandstone from coastal marine deposits, particularly the Neogene Monterey Formation. The oil from this formation has migrated and become trapped in other formations. 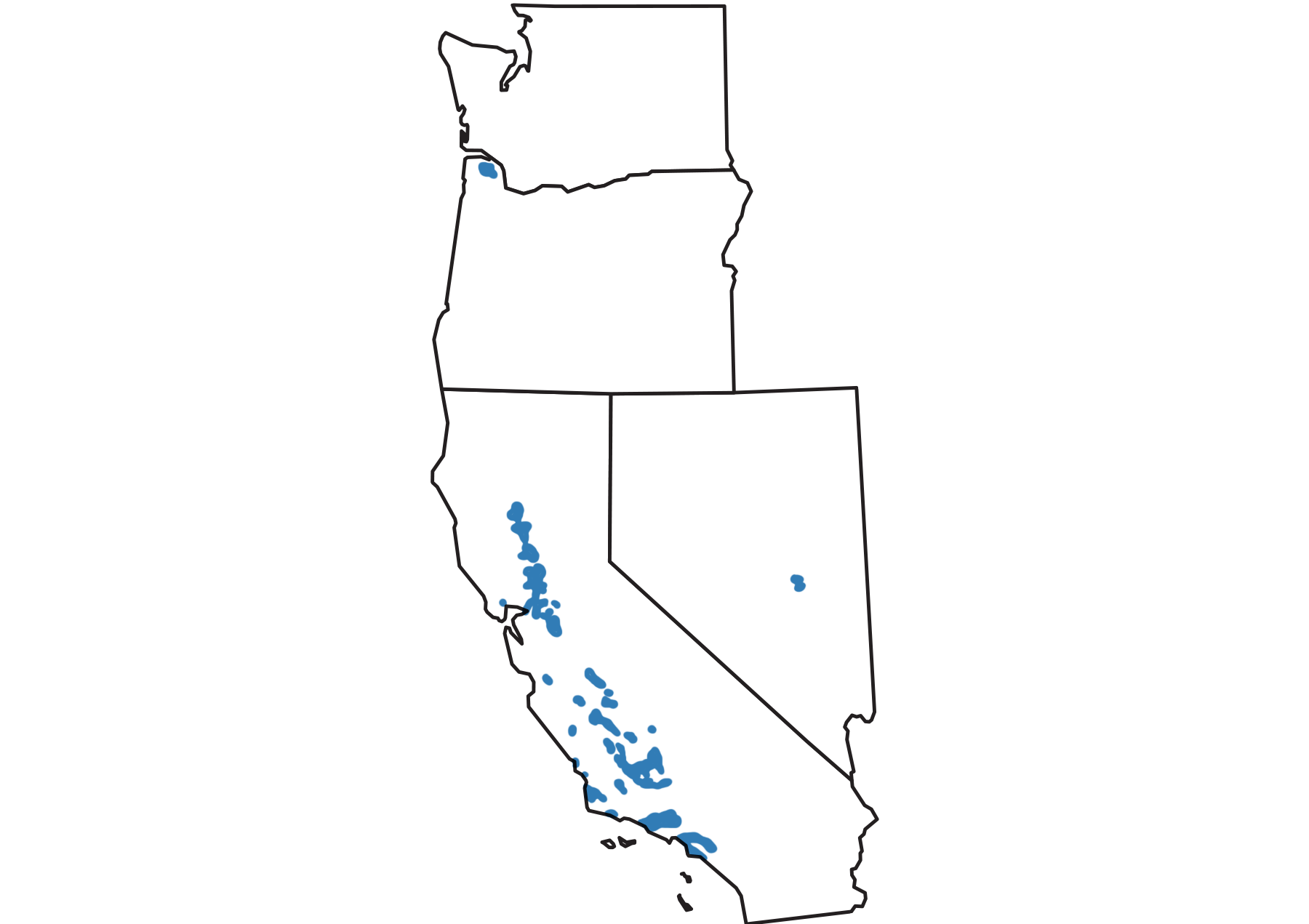 Oil and gas production in the four contiguous states of the western U.S. Map modified from a map by Peter Nester, originally published in The Teacher-Friendly Guide to the Earth Science of the Western US.

California’s first productive well was drilled in the Central Valley in 1865. This area, east of San Francisco, became the scene of heavy drilling activity through the rest of the 1800s, providing enough oil for the nearby market of San Francisco.

The Los Angeles Basin, first drilled in 1892, ultimately turned out to contain the most productive fields in the state. By the early 1920s, California was the source of one-quarter of the world’s entire output of oil, due in large part to the high productivity of the Long Beach Field. 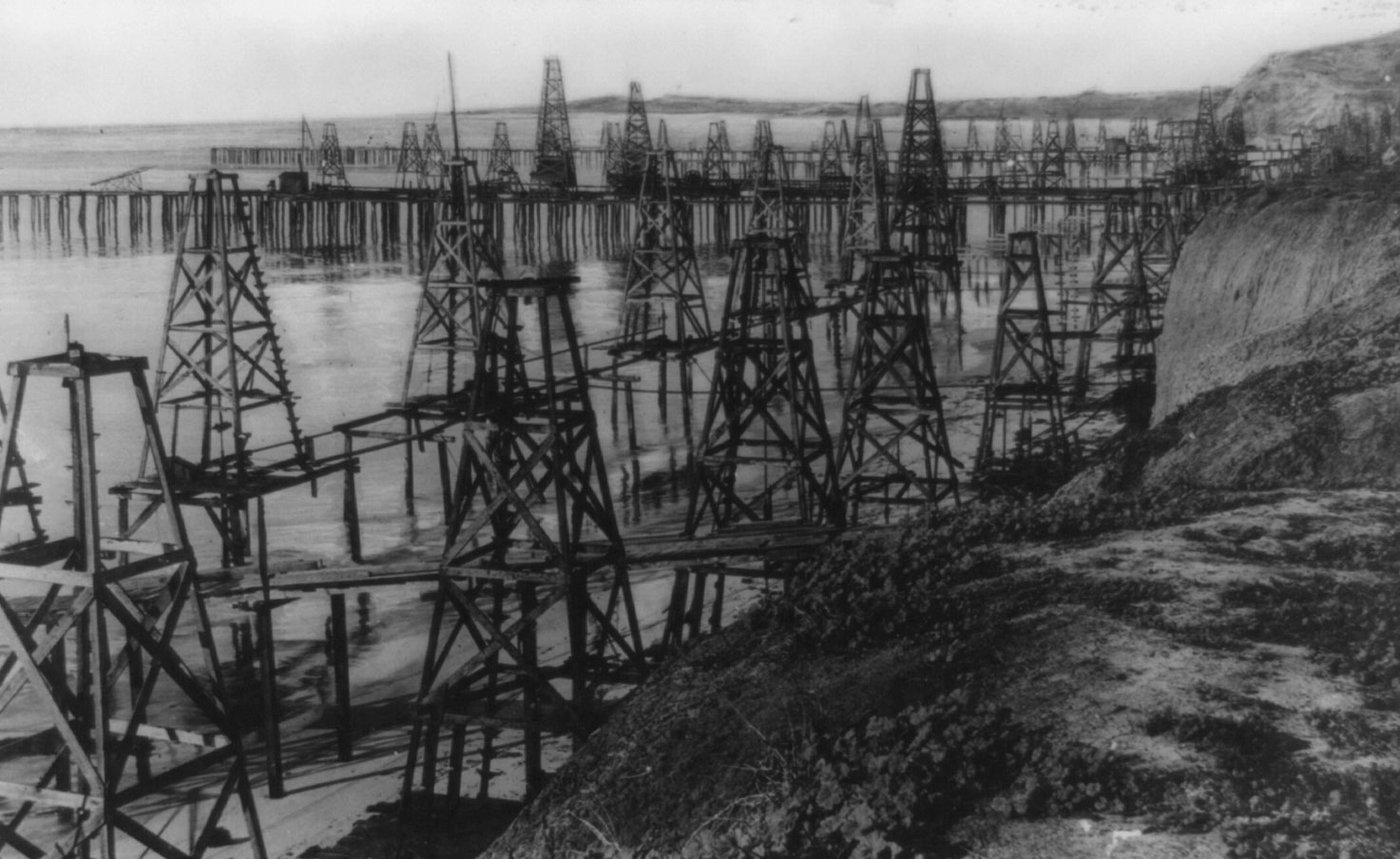 Portion of a panorama of the Signal Hill oil field, Long Beach, California, ca. 1923. Photo by Aerograph Co. (Library of Congress Prints and Photographs Division, no known restrictions on publication).

Presently, Kern River Oil Field near Bakersfield is the mostly heavily developed oil and gas field in California, producing the vast majority of its petroleum. 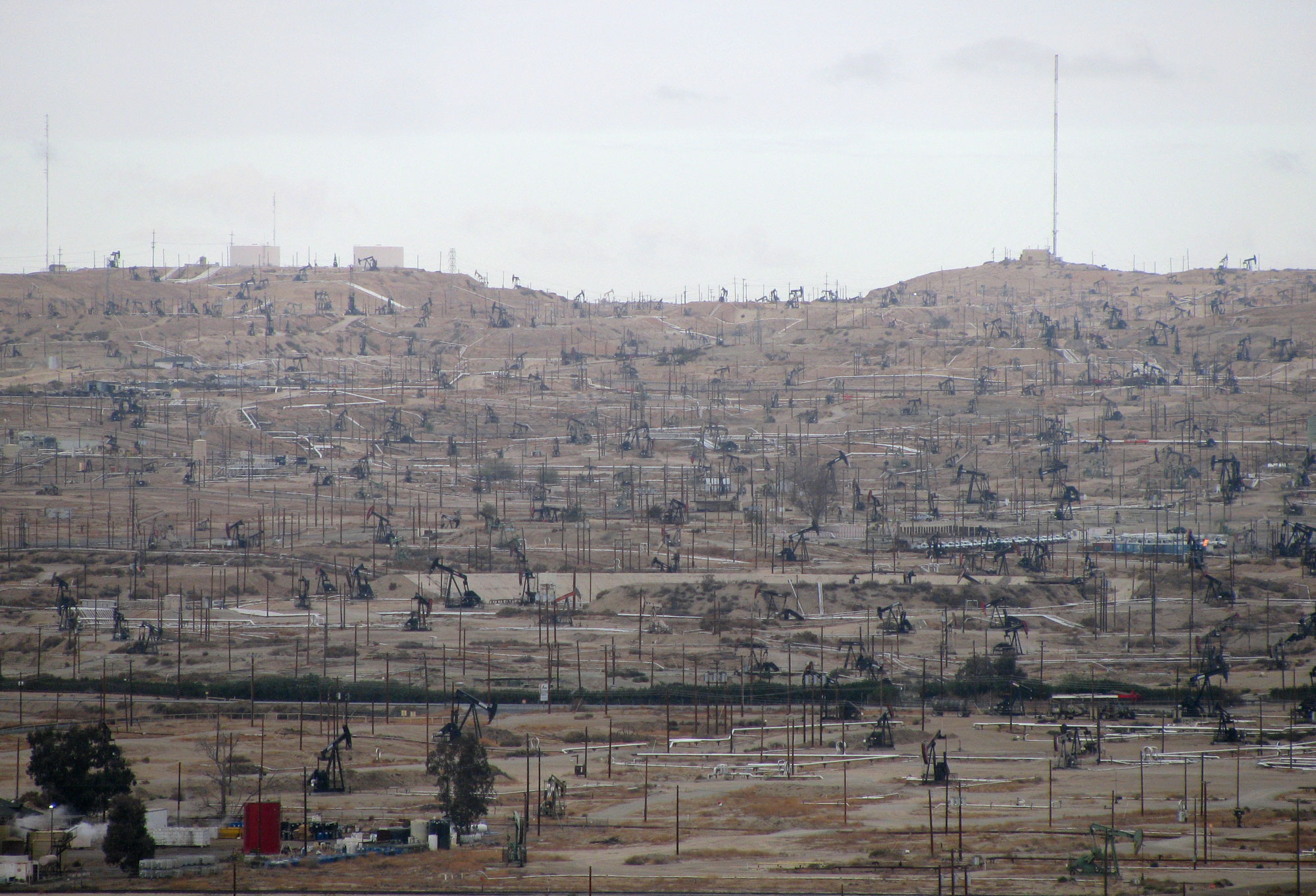 California waters have experienced a number of large oil spills. One of the most well known, the Santa Barbara oil spill of 1969, began on January 28, 1969, when a blowout occurred as Union Oil was drilling a well off the coast of Santa Barbara. Eventually, an estimated 3 million gallons of oil were released into the ocean, killing thousands of birds. The Santa Barbara oil spill was one of the catalyzing events behind the celebration of the first Earth Day in 1970. 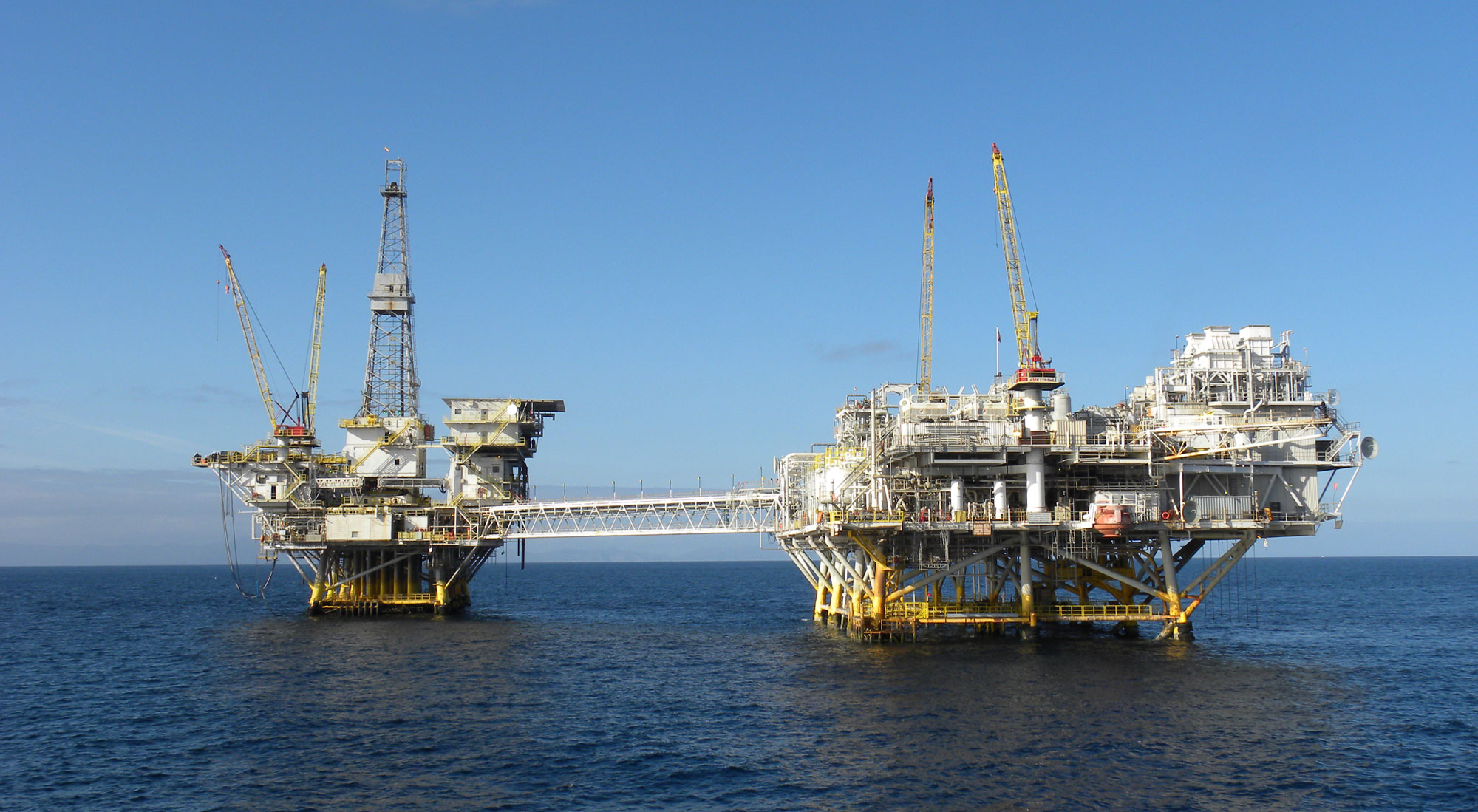 The Elly and Ellen oil platforms off the coast of Long Beach, California, 2012. Photo by Bureau of Safety and Environmental Enforcement (flickr, public domain). 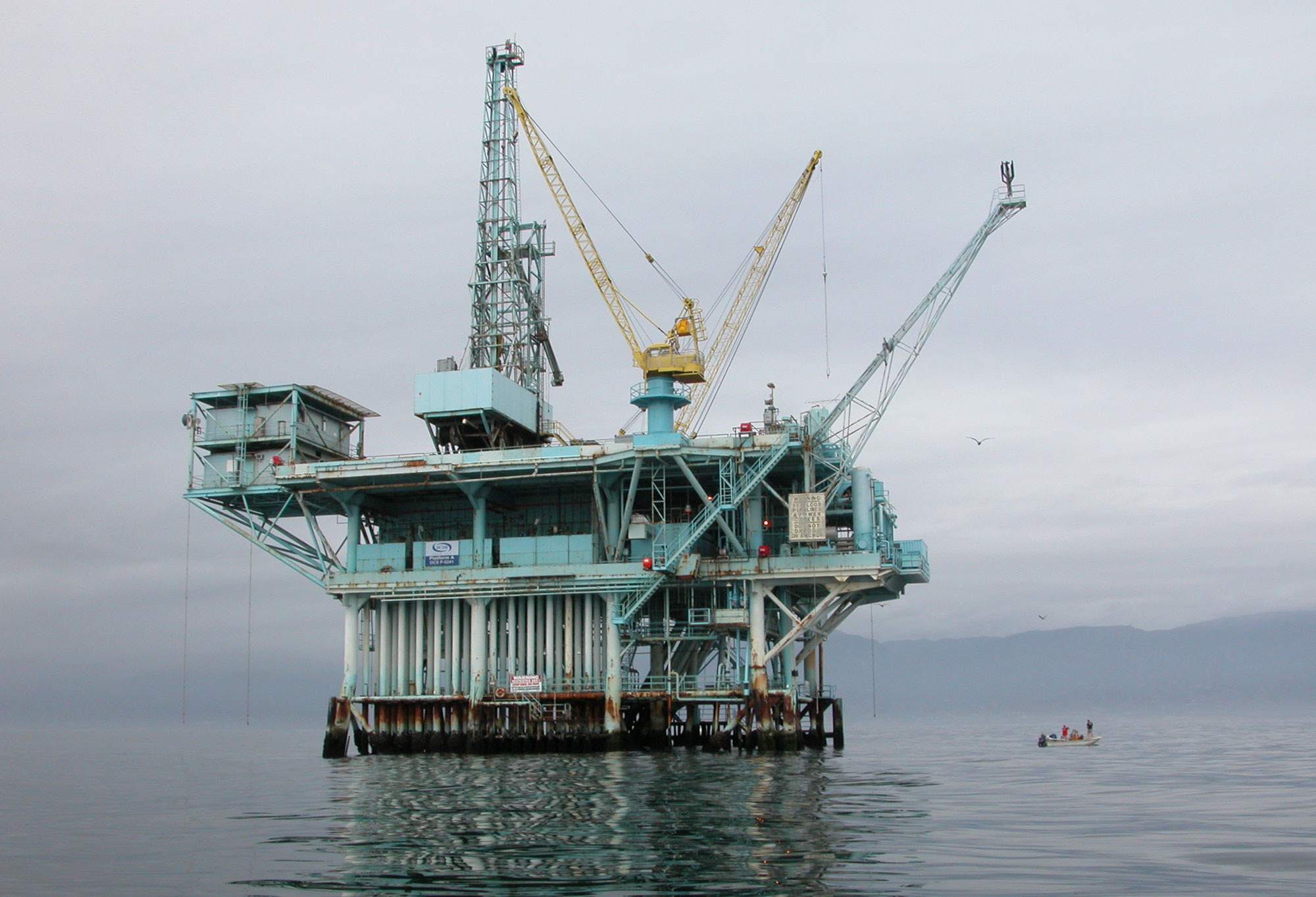 Platform A off the coast of Santa Barbara, California, 2006. This is the oil platform at which the 1969 Santa Barbara oil spill occurred. Photo "sailing_22.jpg" by Doc Searls (flickr, Creative Commons Attribution-ShareAlike 2.0 Generic license, image cropped and resized). 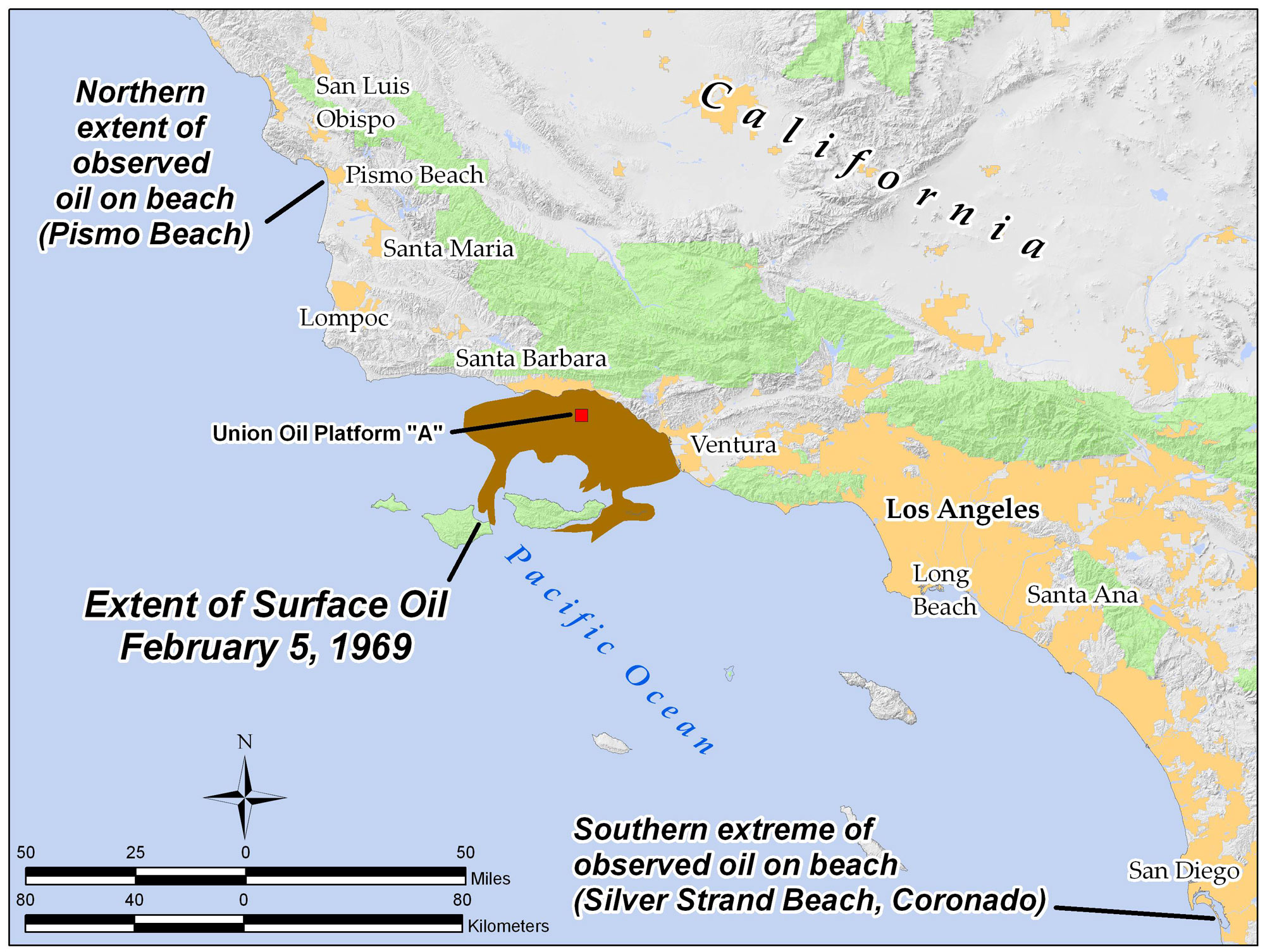 California produces the most solar energy in the U.S. As of 2018, California had a total solar capacity of 12,000 MW; as of 2021, more than 15% of the energy generated in the state came from solar. While production of solar electric power has grown exponentially in the U.S. as a whole, production in California vastly outranks the second-largest solar producer (as of 2021, Texas).

Large solar farms have been constructed in the Central Valley, such as the California Valley Solar Ranch and Topaz Solar Farm, both in San Luis Obispo County. These photovoltaic solar farms have a capacity of 250 MW and 550 MW, respectively. 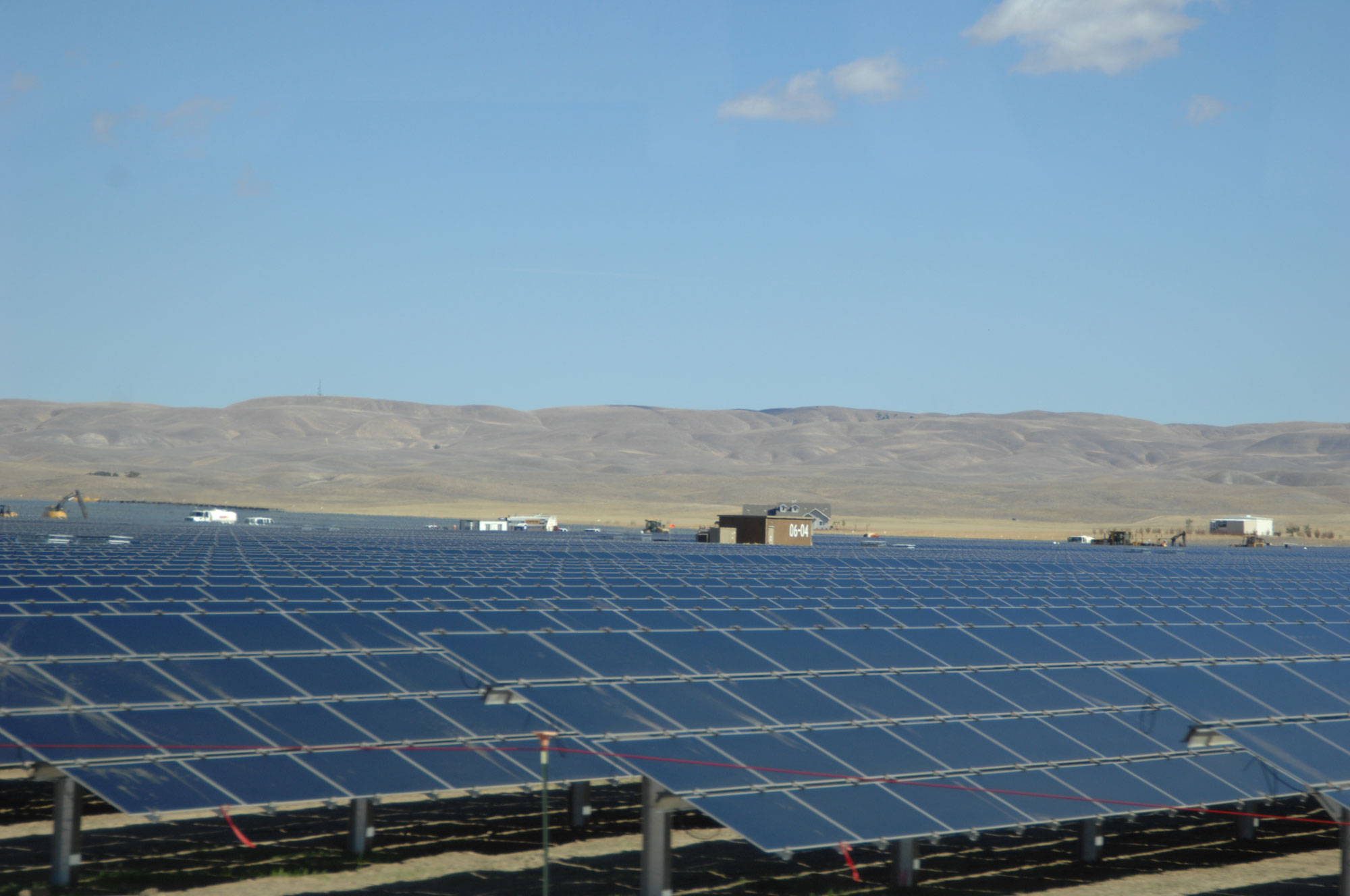 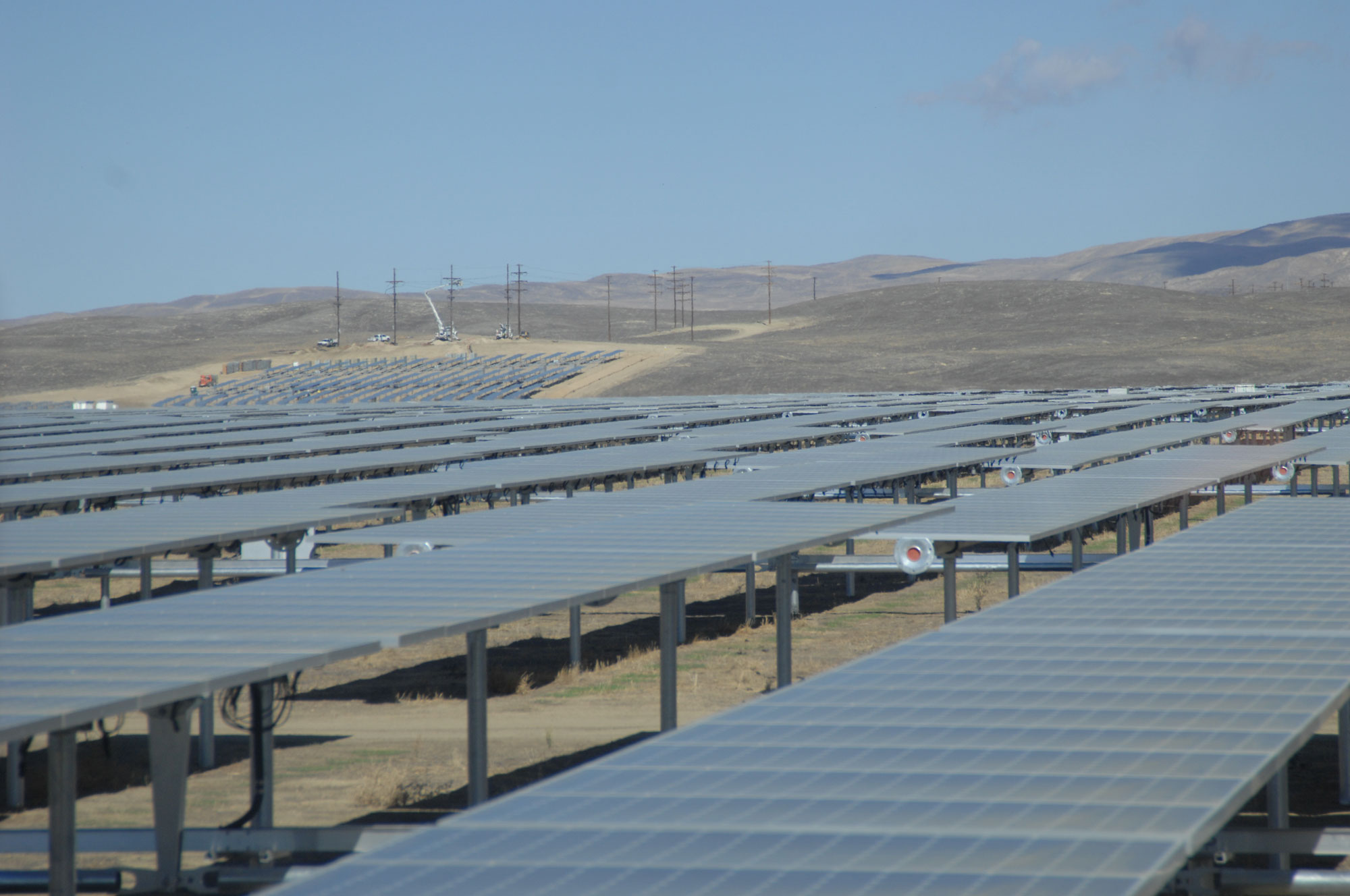 Geothermal energy comes from heat within the Earth, which is created on an ongoing basis by radioactivity. This energy powers mantle convection and plate tectonics. Coastal California is a tectonically active area where geothermal is being produced. The total geothermal capacity of all plants in California is more than 2700 MW. The Geysers geothermal field in northern California is currently the world’s largest complex of geothermal power plants, containing 22 plants that generate an average of 955 MW. 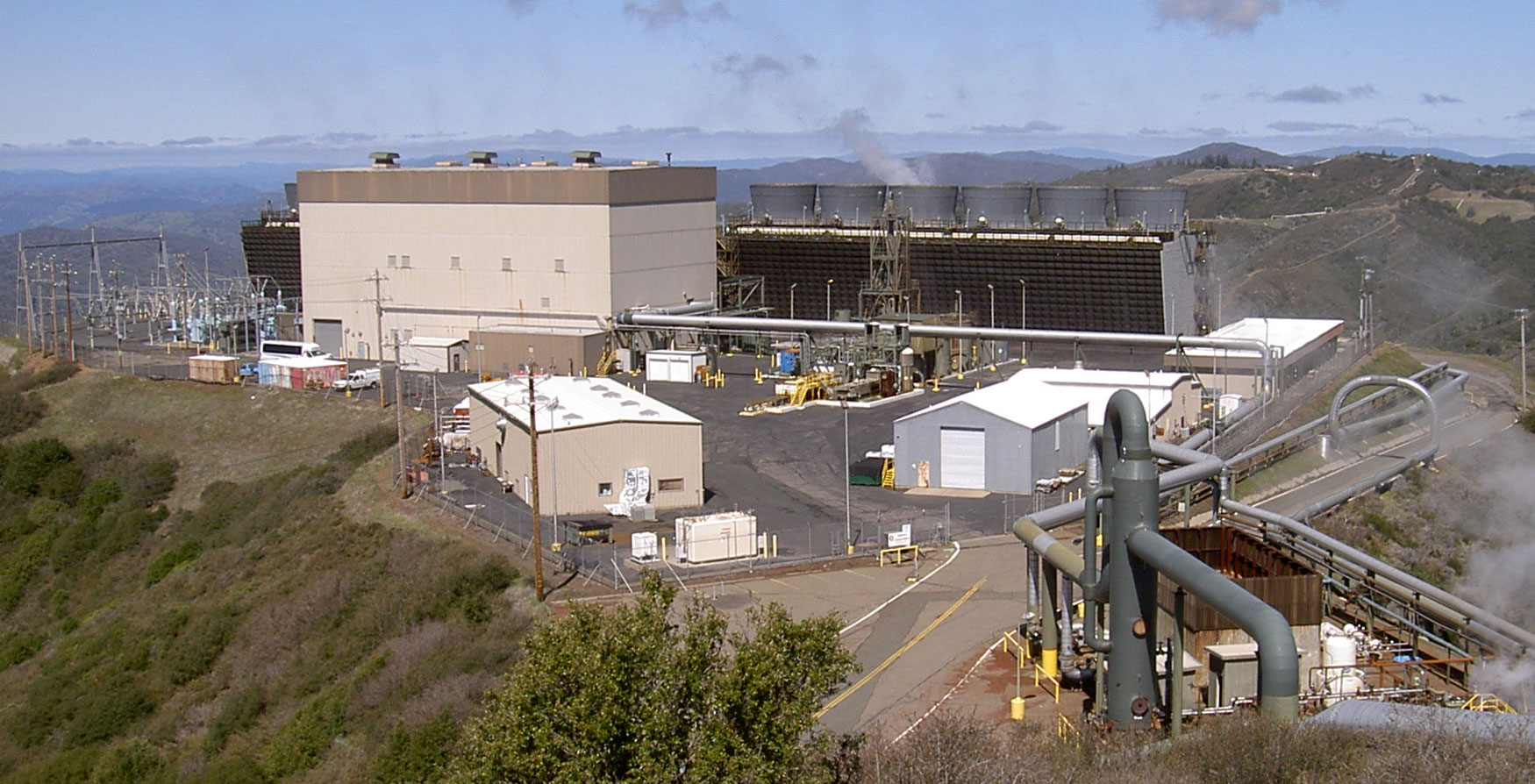 Hydroelectric plants dot the rivers of the Cascade-Sierra Nevada and Pacific Border regions. The mountainous topography and relatively high precipitation (rainfall and snowpack) in western Oregon and Washington and in the Sierra Nevada of California that feeds the rivers makes hydropower a clean and abundant source energy.

Nevertheless, increasing aridity driven by climate change may limit hydroelectric power generation in the future. Drought and water shortages are already affecting energy production and supply. For example, the hydroelectric plant on Lake Oroville, a reservoir in northern California, had to be shut down in August 2021 because water levels fell too low to sustain power generation. 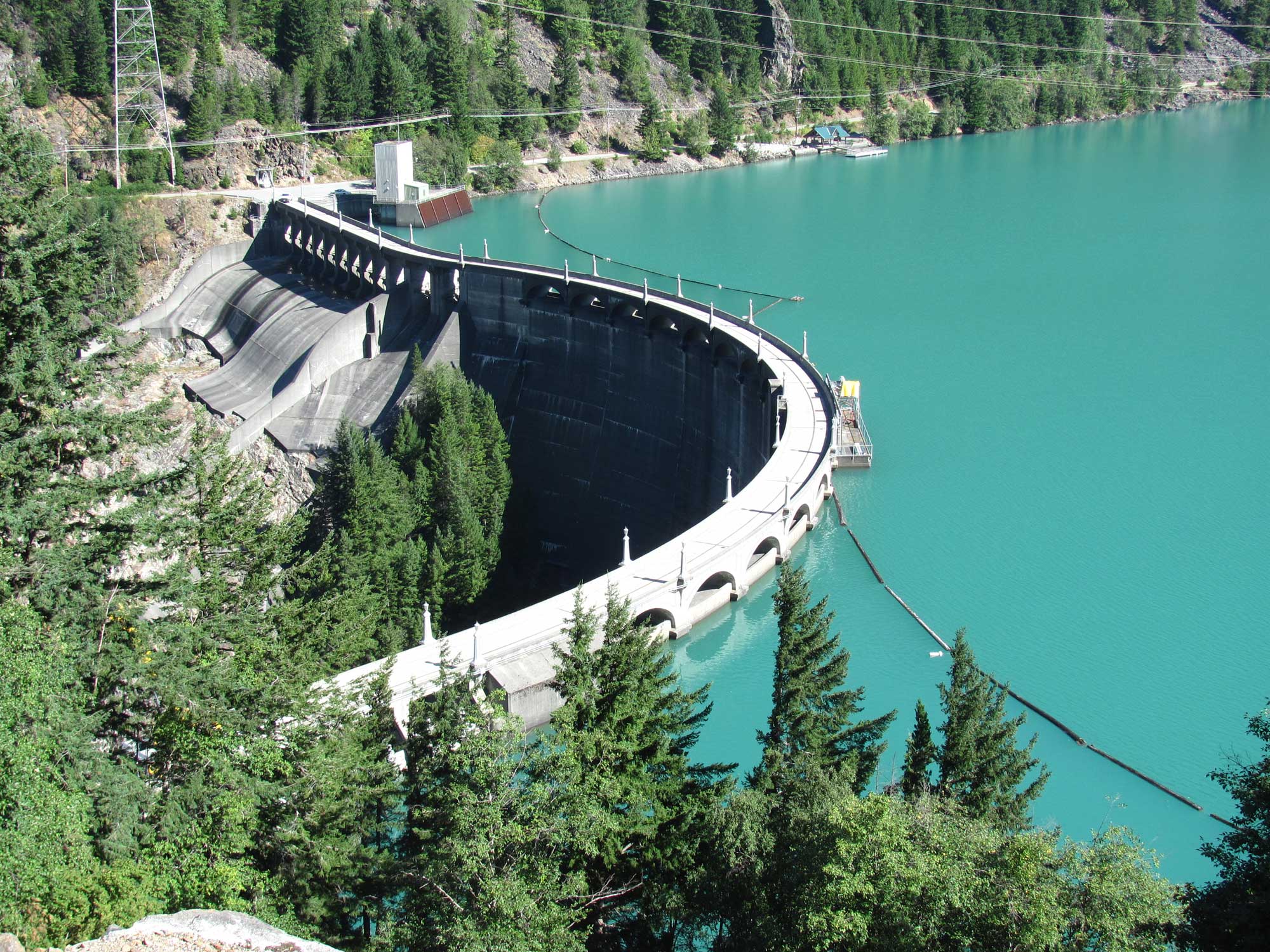 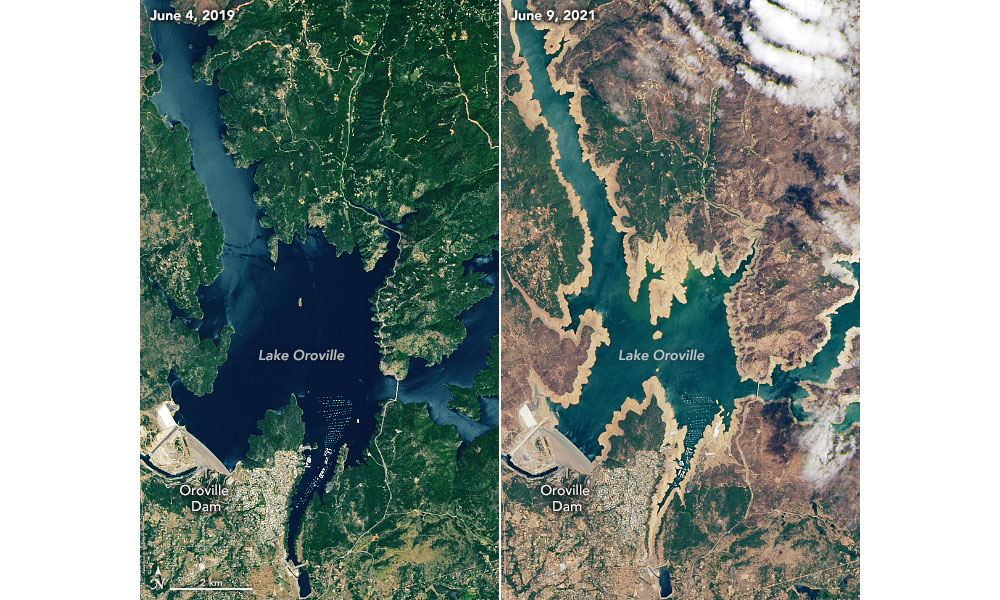 Satellite images of Lake Oroville, a reservoir in northern California. Left: At capacity (highest level), June 2019. Right: At a much lower water level due to drought, June 2021. In August 2021, the Edward Hyatt Power Plant, a hydroelectric plant on Lake Oroville, was shut down because water levels were too low. Source: USGS (public domain).

While dams and hydroelectric plants are sources of abundant clean energy, they also have some negative environmental impacts. Dams in the Cascade-Sierra Nevada and Pacific Border regions have caused populations of salmon and steelhead to drop. These fish are anadromous, meaning that they live in the ocean but spawn in freshwater. They swim many miles upstream from the ocean to spawn, and dams are barriers that can prevent them from reaching their spawning grounds. Furthermore, turbines can injure or kill young salmon swimming downstream to the ocean.

The problems caused by dams have been partially addressed, although the solutions are imperfect, and salmon and steelhead populations remain in peril. Fish ladders, structures that allow adult fish to maneuver around dams to travel upstream to spawning grounds, have been built on some dams. Fish hatcheries run by U.S. government agencies and Native American nations help augment the reduced fish populations. 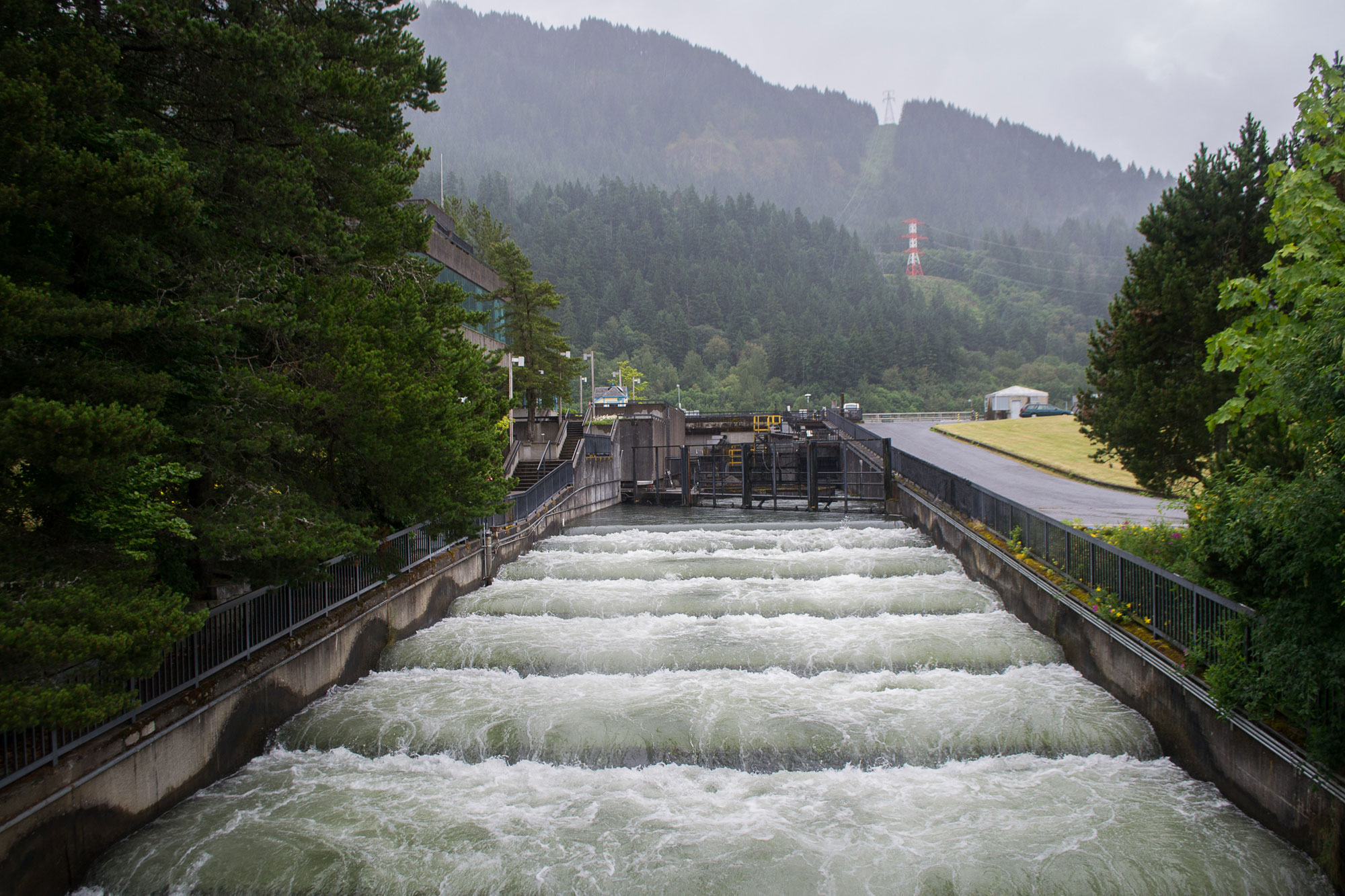 Dams have been removed or are under consideration for removal in certain areas. For example, Elwha Dam (dating to 1913) and the Glines Canyon Dam (dating to 1927) on the Elwha River in Olympic National Park, Washington, were removed in 2011 and 2014, respectively. Both of these dams were used to run relatively small (less than 15 MW each) hydroelectric plants. Restoration of the Elwha River continues, and the degree to which anadromous fish populations may rebound remains to be seen.

Native American nations and environmental groups in the region have advocated for the removal of dams on the Klamath River in northern California. These dams have caused the numbers of salmon spawning in the river to plummet. Four dams in the lower Klamath River are now scheduled for removal beginning in 2023. While the dams do provide power to the region, their role can be taken over by existing wind farms. Despite the plan for dam removal, there are fears that the salmon population could completely collapse in parts or all of the Klamath River Basin. 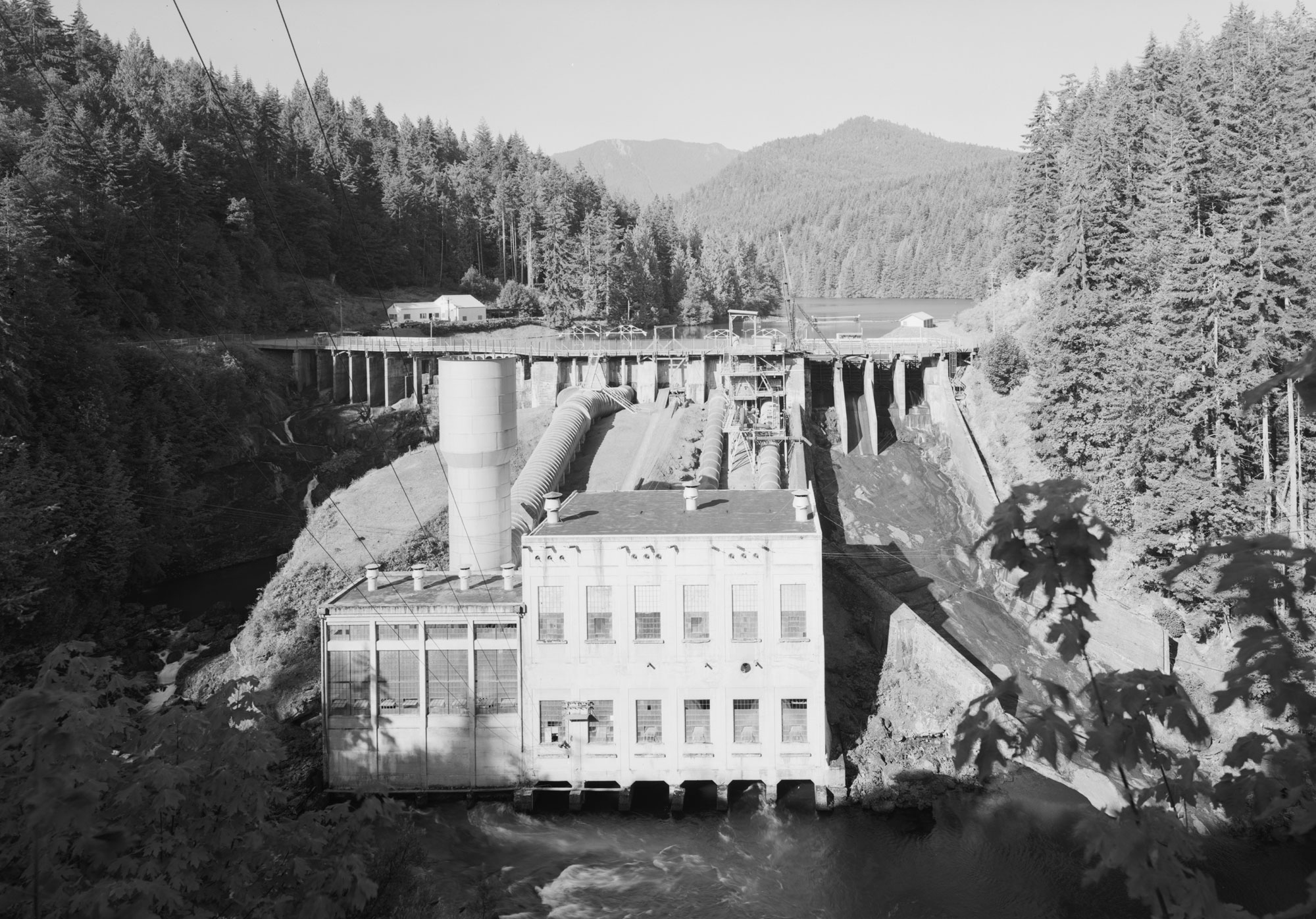 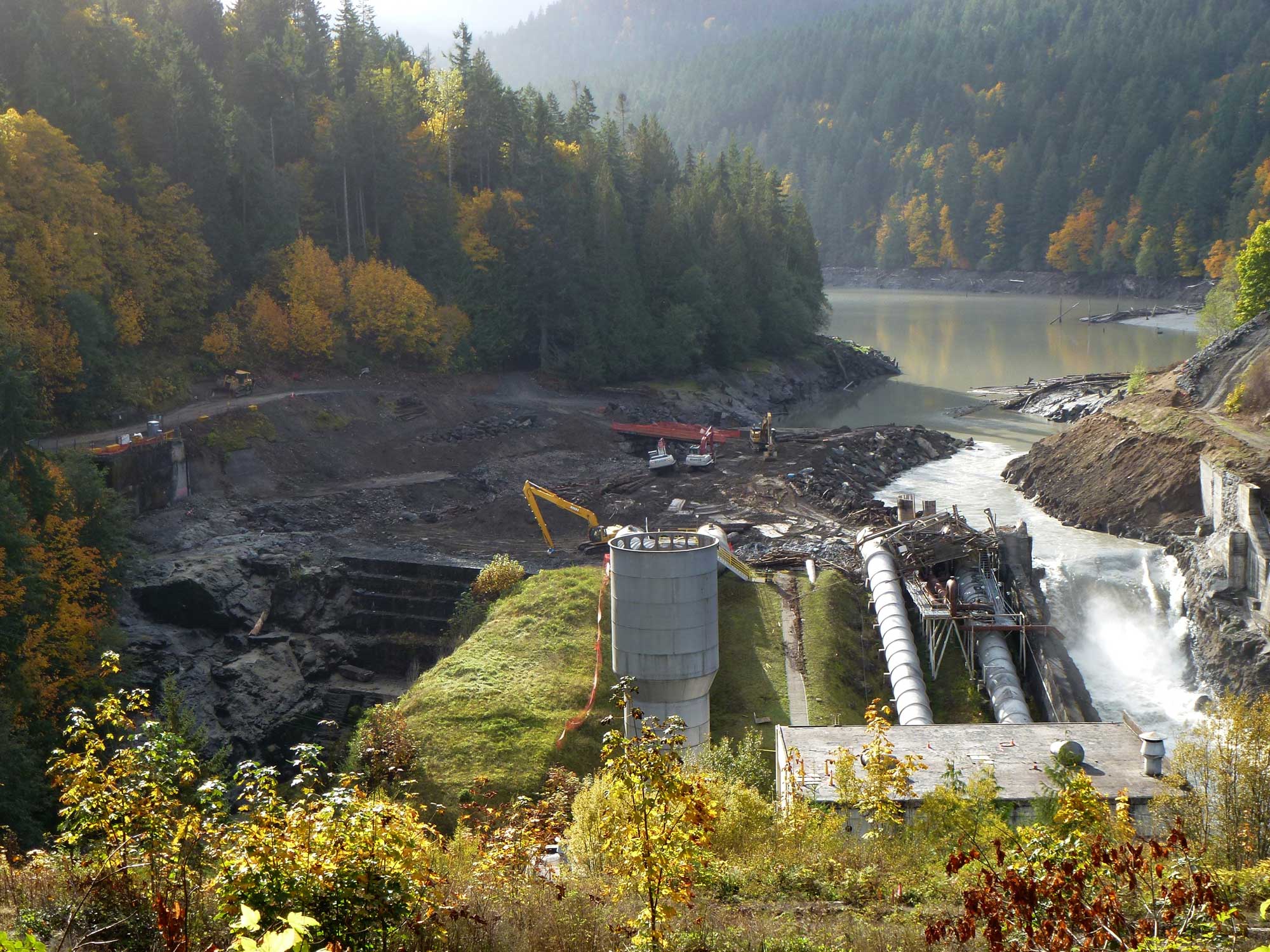 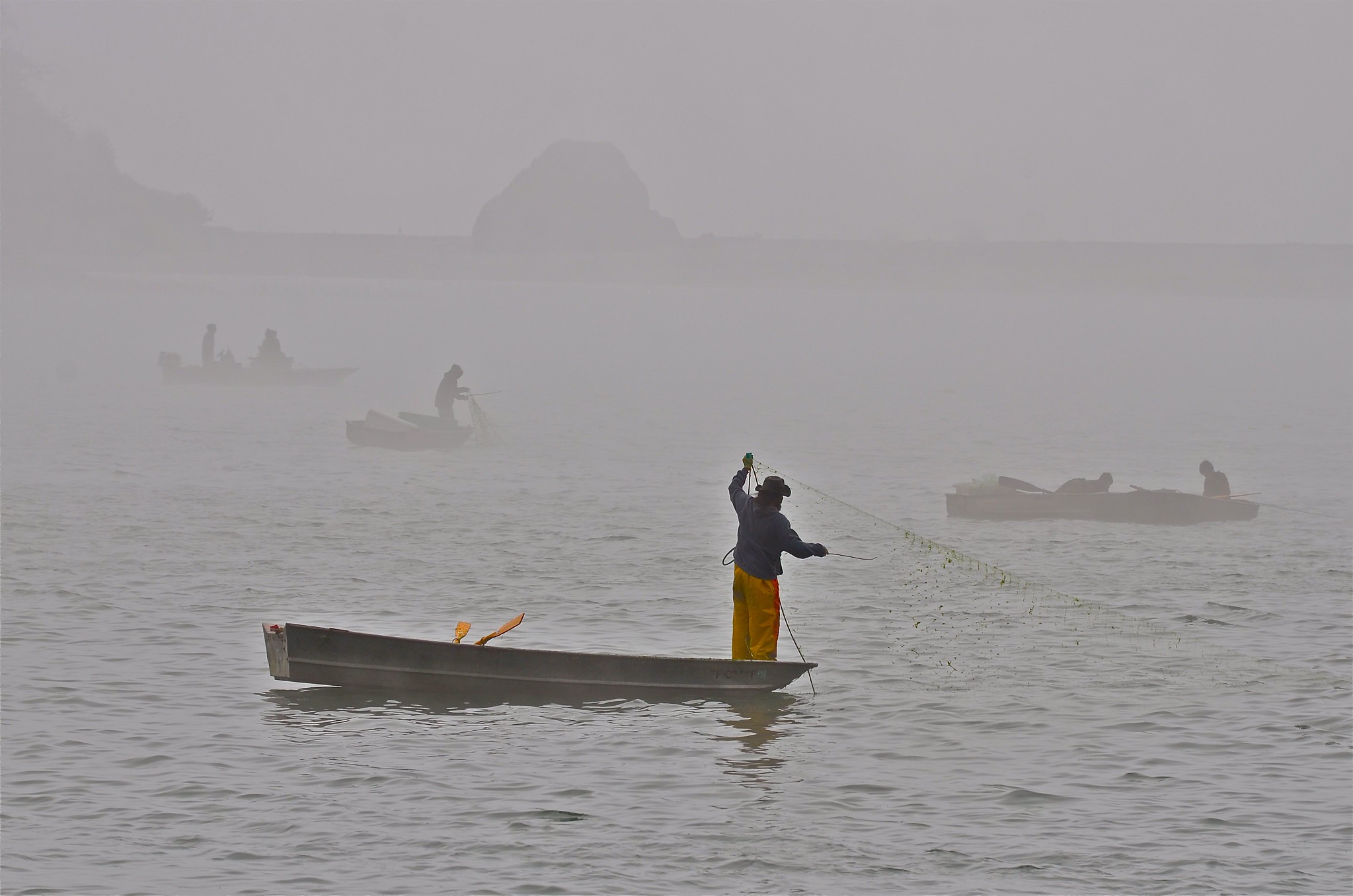 California is also first in large-scale wind energy production in the U.S. In fact, the Altamont Pass Wind Farm, with 4930 wind turbines that produce 1.1 terawatt-hours (TWh) yearly, is the largest array of wind turbines with the greatest production capacity in the world. 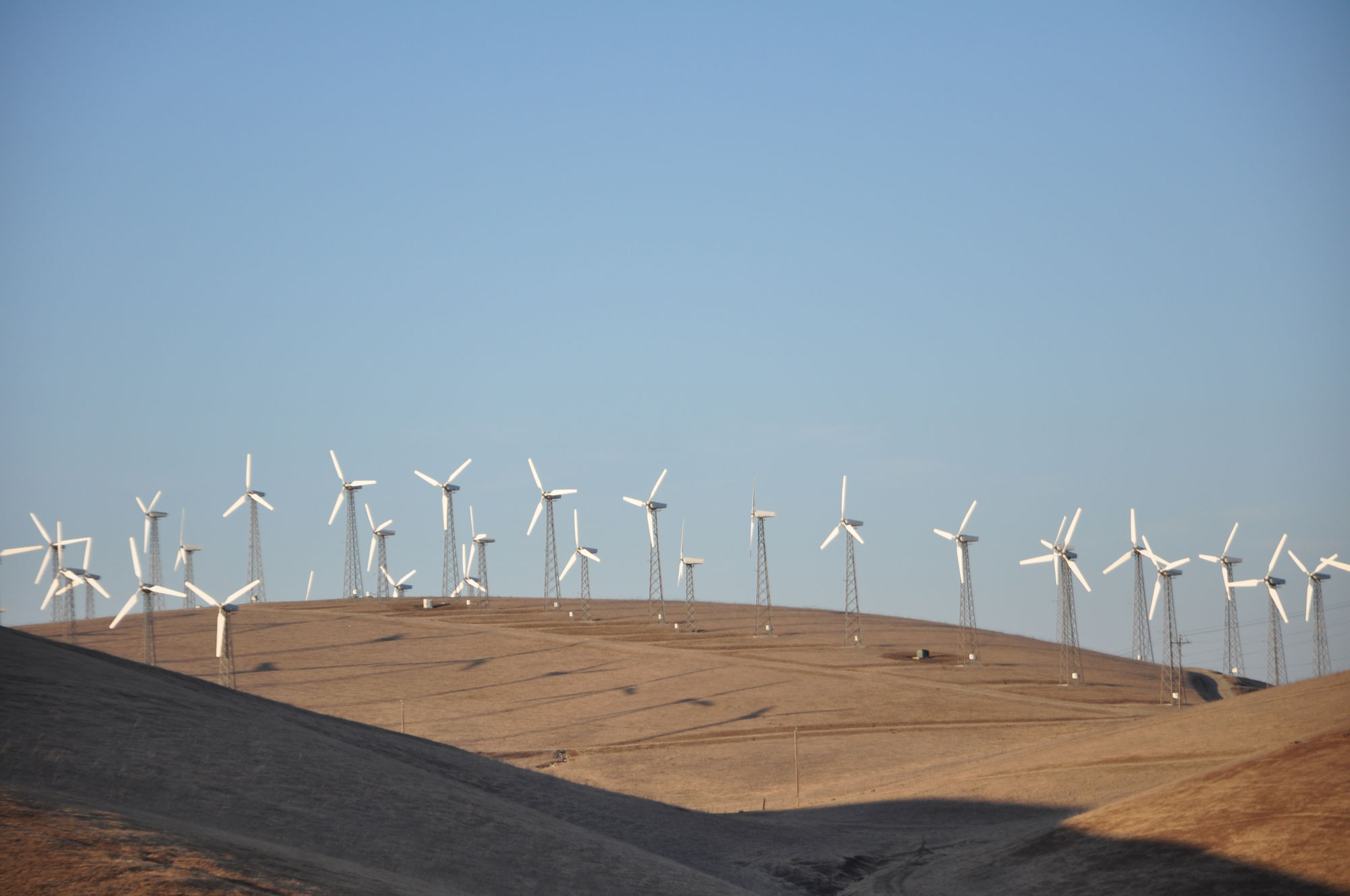 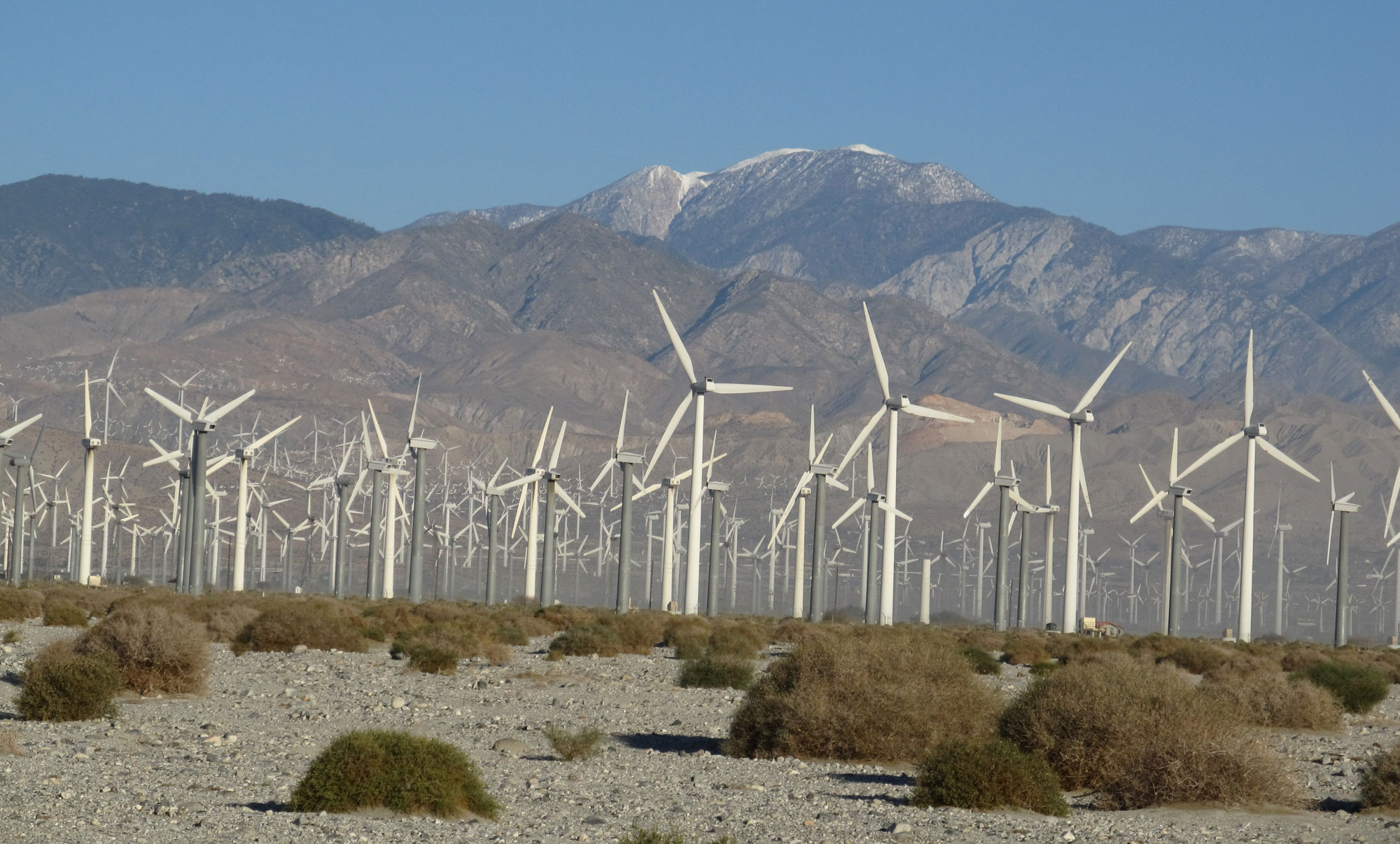 Nuclear power plays a part in the region’s energy production, although the proportion of energy provided by nuclear power is decreasing. The San Onofre Nuclear Power Plant in southern California was decommissioned in 2012, cutting the state’s nuclear energy production in half, from about 4000 MW to about 2000 MW. Because of the loss of this power source, California has had to rely more heavily on natural gas-fueled power plants. The California Air Resources Board estimates that through the loss of the “clean” nuclear energy and an increase in the use of natural gas, air pollution in the area has increased by about 25%.

The Diablo Canyon Power Plant near San Luis Obispo, California, and the Columbia Generating Station in Richland, Washington, are the only two operating nuclear energy plants on the West Coast. Diablo Canyon has a capacity of 2240 MW. While the plant was scheduled for closure in 2025, that plan is being reconsidered in light of the state's energy needs and clean (carbon-free) energy goals. 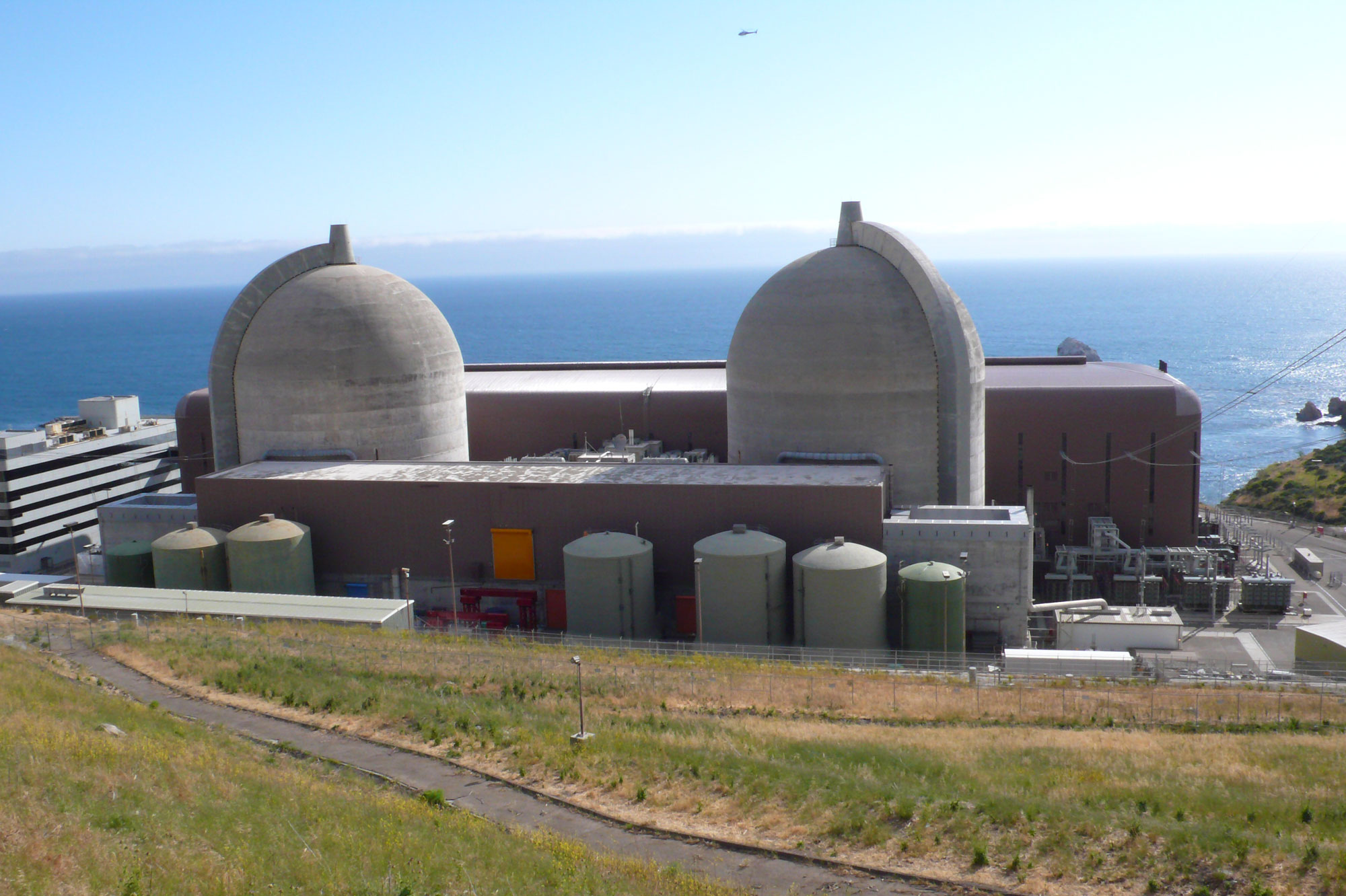