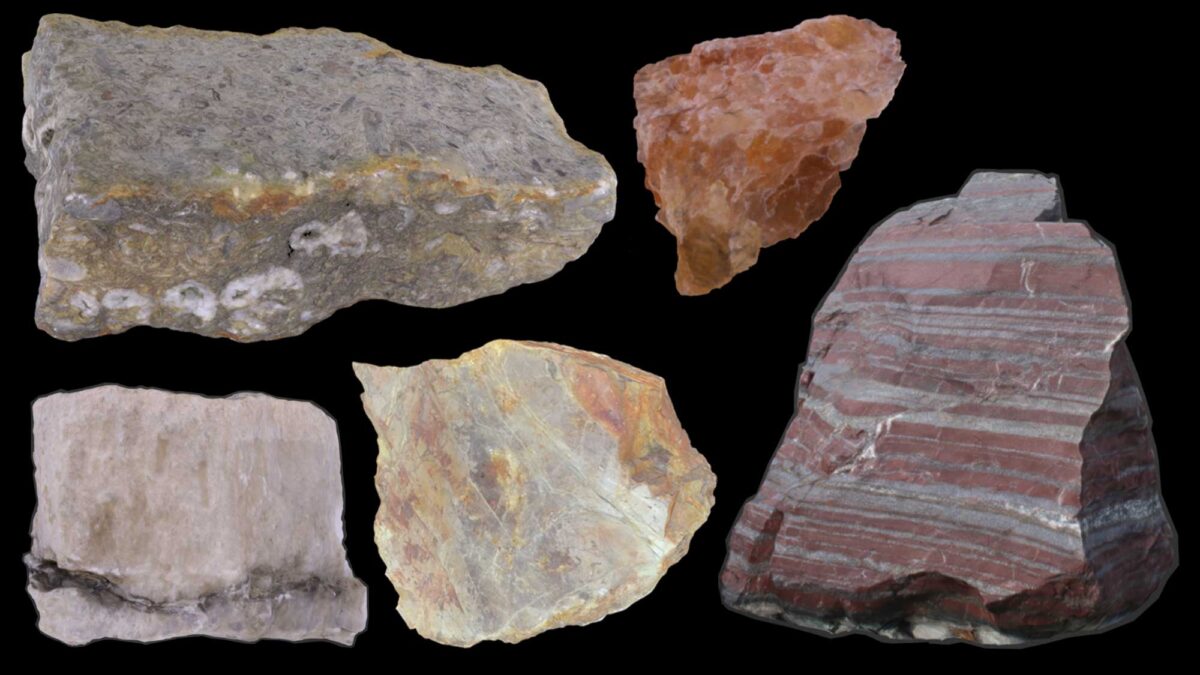 Image above: Examples of different types of chemical and organic sedimentary rocks. Sources of individual rock images are derived from 3D models on Sketchfab with Creative Commons licensing; see same models below for creator credits and licensing details.

There are two major kinds of carbonate rocks, both of which are composed of minerals with a (CA₃)⁻² anion: limestones and dolostones.

Limestones are composed of calcium carbonate (CaCO₃) and are often produced by organisms, including algae, microscopic organisms called foraminifera, and animals such as corals, snails, and clams. Note that some of these organisms produce skeletons composed of the mineral calcite, while others use aragonite; both minerals have the formula CaCO₃. If a weak acid is applied to limestone, it will fizz, a property that is very useful for identifying this type of rock. Several different types of limestone are presented below.

Limestone by Digital Atlas of Ancient Life on Sketchfab

Large limestone block on exhibit outside the Museum of the Earth, Ithaca, NY. The dark-colored layer in the middle of the block is chert (see below) (Sketchfab; Creative Commons Attribution-ShareAlike 4.0 International license).

As implied by its name, fossiliferous limestones contain abundant remains of ancient organisms.

Fossiliferious Limestone by Digital Atlas of Ancient Life on Sketchfab

Coquina is a form of limestone that is composed almost entirely of the broken fragments of the calcium carbonate skeletons of invertebrate animals (commonly the shells of mollusks).

Coquina (PRI) by Digital Atlas of Ancient Life on Sketchfab

Chalk is a form of limestone composed of the calcitic skeletons of microscopic algae called coccolithophores. It is a very soft type of rock, making it useful for writing on chalk boards. It is often white or tan in color.

Original caption: "This is the Spergen Limestone from Indiana. It contains many oolites and also some small fossils. The sample is 10 cm wide." Zoom in to see the individual ooids. Model by "rocksandminerals" (Creative Commons Attribution 4.0 International license; Sketchfab).

Travertine is a form of limestone that often precipitates from groundwater in caves or in association with hotsprings. It often has a fibrous texture and/or shows concentric layering. Travertine is commonly used as a building material or in sculptural artwork.

Dolostone is composed of the mineral dolomite [CaMg(CO₃)₂)]. Instead of being precipitated directly by organisms, dolostone is usually formed by alteration of limestone when some of the calcium is replaced by magnesium. Dolostone also fizzes when it comes into contact with acid, but the degree of fizzing is not as vigorous.

Dolomitic limestone #65 05-19-2020 by rocksandminerals on Sketchfab

Original caption: "This nondescript rock is a sample of the Lockport Dolomite from near Rochester, New York. It is almost entirely made of dolomite. It is 9 cm wide." Model by "rocksandminerals" (Sketchfab; Creative Commons Attribution 4.0 International license).

Evaporites are rocks composed of minerals that remain after seawater evaporates from an area. They are less common than many other types of sedimentary rocks, though may be locally abundant. Examples include rock salt and rock gypsum.

Rock salt is composed of the mineral halite (NaCl).

Specimen of rock salt comprised of the mineral halite. Note that rock salt can be many different colors and is often gray or colorless. Longest dimension of specimen is 9 cm (Sketchfab; Creative Commons Attribution-NonCommercial 4.0 International license).

Rock gypsum is composed of the mineral gypsum (CaSO₄.2H₂O).

Mineral: Gypsum by Digital Atlas of Ancient Life on Sketchfab

Original caption: "This rock is made just about entirely of gypsum. It comes from Fremont County, Colorado. The specimen is 9 cm in longest dimension." Model by "rocksandminerals" (Sketchfab; Creative Commons Attribution 4.0 International license).

Diatomite is a type of organic sedimentary rock that is composed almost entirely of the microscopic skeletons of algae called diatoms. These tiny skeletons are composed of silica.

Fish skeleton by Earth Sciences, University of Newcastle on Sketchfab

Sample of diatomite that includes a partial skeleton of a fossil fish. Model by Earth Sciences, University of New Castle (Sketchfab).

Diatom 2 by planktonix on Sketchfab

The silica skeleton of a diatom. Model by "planktonix" (Sketchfab).

Chert (also known as flint) is a rock that is often formed from the skeletons of microorganisms and sponges that make their skeletons out of SiO₂. Because it is hard and may be modified to produce sharp cutting edges, it was once widely used to produce projectile points (e.g., arrowheads) and other cutting and scraping tools.

Banded iron is an extinct type of chemical sedimentary rock that only formed during the Precambrian when oxygen levels were much lower than they are today. The rock is often easily identified by its alternating layers of red and gray. Banded iron formations provide much of the world's supply of iron ore, which is critical for the production of steel.

Coal is a fossil fuel derived from the remains of ancient plants that accumulated in low oxygen environments (e.g., swamps) and were then subjected to burial and heating. This type of rock is almost always brown or black in color and consists mostly of carbon. As metamorphism transforms coal from lignite to bituminous coal to anthracite, it becomes darker in color and richer in carbon; the rock itself also becomes harder. Because anthracite coal has the highest carbon content, it is also the most valuable type of coal.

Lignite (aka brown coal) by tfrank2 on Sketchfab