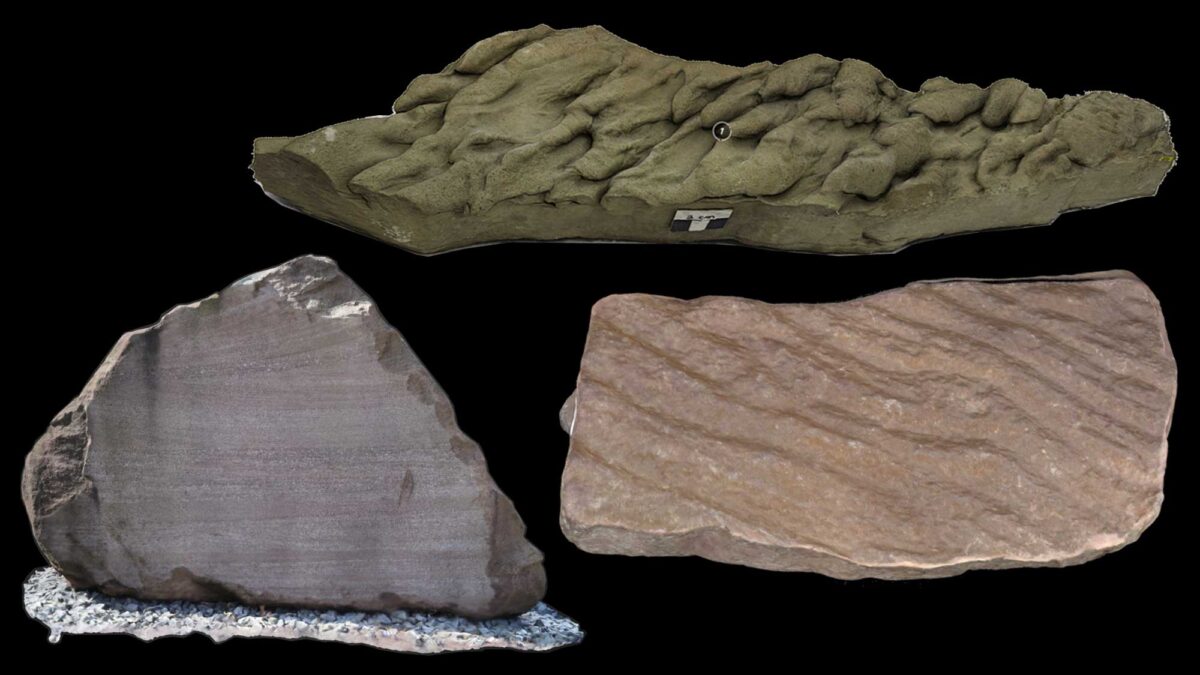 Image above: Examples of different types of sedimentary structures. Sources of individual rock images are derived from 3D models on Sketchfab with Creative Commons licensing; see same models below for creator credits and licensing details.

Sedimentary structures provide evidence of the actions of the physical environment that are preserved in sedimentary rocks. Examples include ripple marks, cross-bedding, fossils uniformly oriented by currents, scours left by objects that were dragged by water flow, mud cracks formed in drying sediments, and even the impressions of raindrops made in ancient soft sediments before they hardened.

Crossbedded Sandstone by Digital Atlas of Ancient Life on Sketchfab

Large block of sandstone exhibiting cross-bedding. Block is on display outside of the Museum of the Earth, Ithaca, New York.

Original caption: "Paleocurrent indicators are primary sedimentary structures which indicate either the flow direction, or axis of the current at the time of sediment deposition. In some cases, clasts (such as pebbles or small cobbles) will be preferentially aligned in such a way that they can serve as indicators of the direction of the current flow (i.e. Imbricated Clasts in conglomerates). In this particular case, Belemnite fossils have been been aligned with the paleocurrent axis. Unfortunately, due to the lack of any obvious imbrication, while the axis of current flow is apparent, the direction of current flow is not." Model by Nate Siddle and the University of Queensland School of Earth Science, Australia (Sketchfab).

Flute casts by callanbentley on Sketchfab

Impressions of raindrops. Model by Nate Siddle and the University of Queensland School of Earth Science, Australia (Sketchfab).