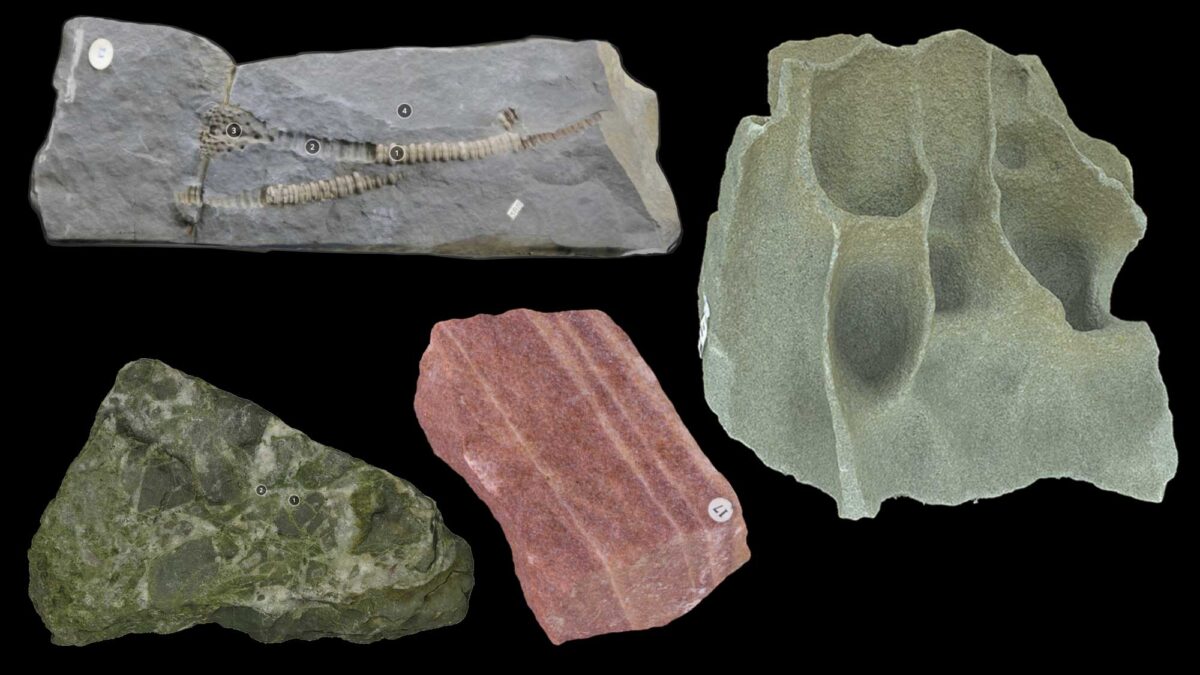 Image above: Examples of different types of siliciclastic sedimentary rocks. Sources of individual rock images are derived from 3D models on Sketchfab with Creative Commons licensing; see same models below for creator credits and licensing details.

Siliciclastic sedimentary rocks are composed primarily of silicate minerals (e.g., quartz, feldspar, etc.) broken away from older, preexisting igneous, metamorphic, or sedimentary rocks. The fragments of these preexisting rocks are often transported far away from their source rock prior to being deposited in basins, where they accumulate as sediments that later become rock following compaction and cementation. Siliciclastic sedimentary rocks are classified based on their grain sizes and include: conglomerate and breccia, sandstone, siltstone, and shale.

QUARTZ CONGLOMERATE by University of Lethbridge Library on Sketchfab

Sandstones are derived from accumulations of sand grains that range in size from 0.062 to 2 mm. Subgroupings sandstones are based on the minerals that make up the individual sand grains.

As their name implies, quartz sandstones mostly consist of sand-sized grains of the mineral quartz. They are often white in color, though staining can result in other colors as well.

Sandstone-01 by rockdoc on Sketchfab

Sample of Cambrian-aged Potsdam Sandstone from its type area at Hannawa Falls, near Potsdam, New York. The red coloring of this sample suggests a feldspar-rich sandstone, but it is instead almost entirely composed of quartz grains that are coated by red hematite dust. Maximum dimension of specimen is approximately 9 cm. Model is by the Paleontological Research Institution (Sketchfab; Creative Commons Attribution-ShareAlike 4.0 International license).

Arkose sandstones are often pink or reddish in color, resulting from a large abundance of sand-sized grains of feldspar.

Original caption: "This is a sample of the Mt. Tom Arkose from western Massachusetts. It contains visbile grains of red feldspar and quartz. The specimen is 9.5 cm wide." Model by "rocksandminerals" (Sketchfab; Attribution-ShareAlike 4.0 International license).

Lithic sandstones are variable in color, though are often brownish or gray. This is because their individual sand grains often represent a diversity of mineral types, with quartz and feldspar usually being low in abundance.

Honeycomb sandstone by Earth Sciences, University of Newcastle on Sketchfab

Sample of lithic sandstone (=lithic arenite). Note that this particular sample exhibits honeycomb weathering, which is not a general feature of lithic sandstones. Specimen is from the Newcastle Coal Measures of Newcastle, Australia. Model by Earth Sciences, University of Newcastle (Sketchfab; Creative Commons Attribution-NonCommercial 4.0 International license).

Siltsone is composed of individual silt grains that range in size from 0.0039 to 0.062 mm in size.

Shale is composed of grains of clay that are too small to see with the naked eye (less than 0.039 mm in size).

Specimen of black shale (Devonian Geneseo Shale of Tompkins County, New York) with a fossil of the cephalopod Tornoceras uniangulare (PRI 55004). Specimen is from the collections of the Paleontological Research Institution, Ithaca, New York. Maximum diameter of specimen is approximately 6 cm.