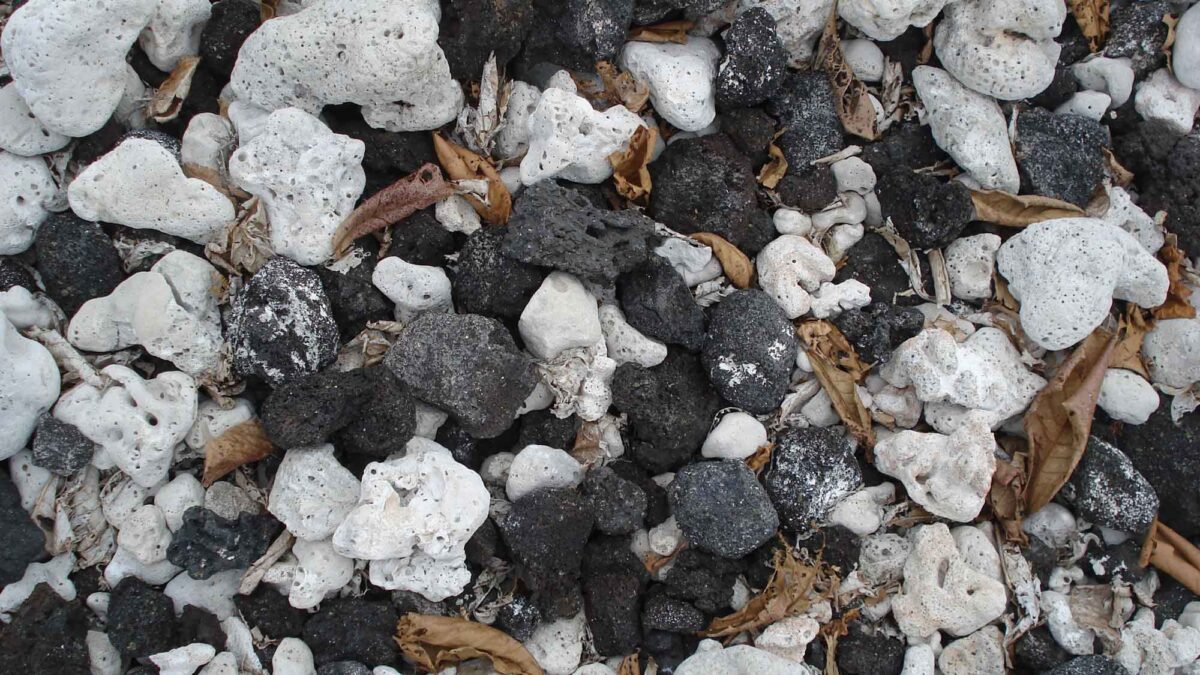 Spotlight: Overview of the rocks of Hawaii. 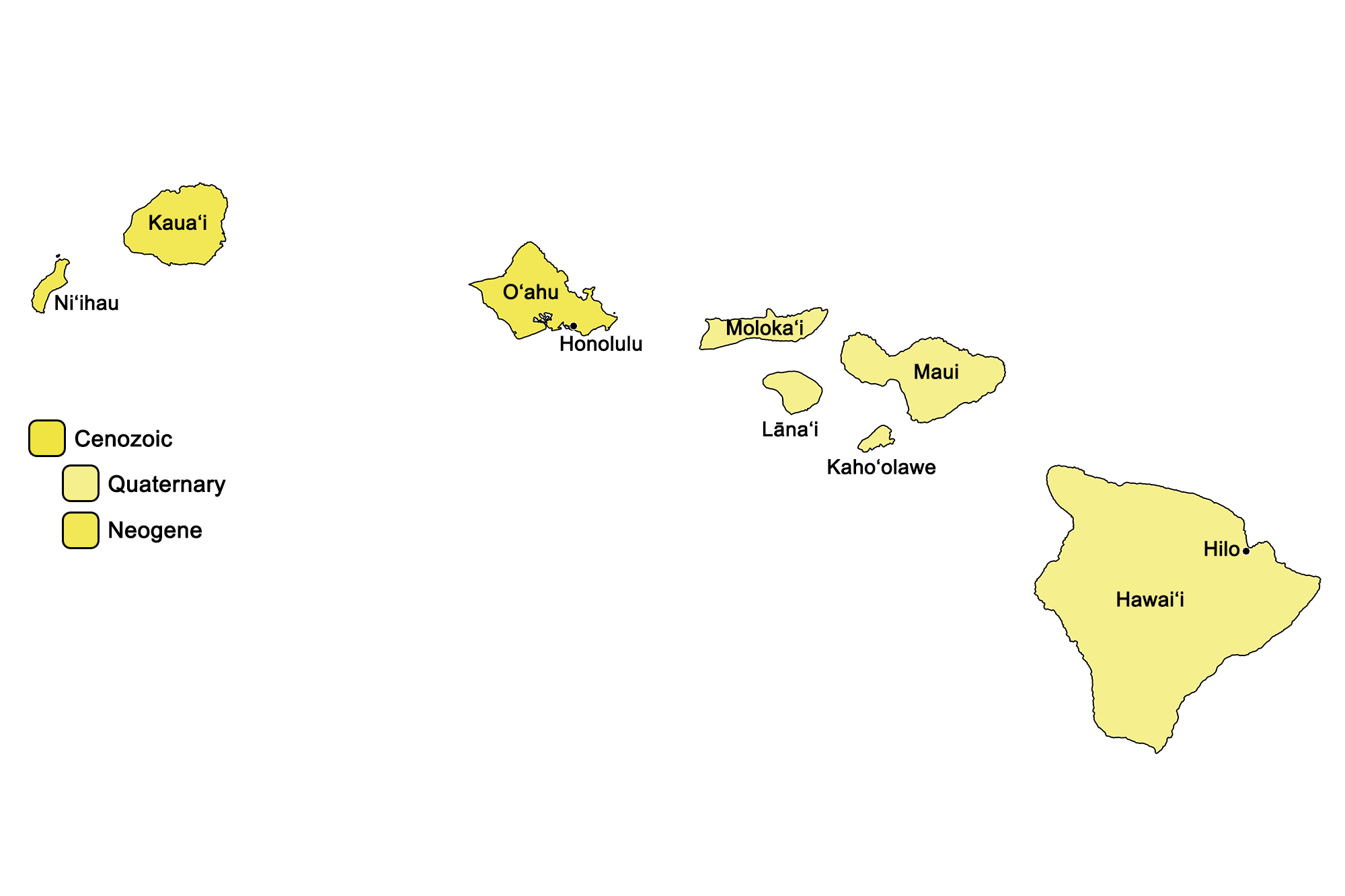 In Hawai‘i, younger igneous rocks dominate the landscape, and basaltic lava flows are part of almost any vista. On the eight main Hawaiian Islands (see map above), the oldest exposed flows on the islands of Ni‘ihau, Kaua‘i, and O‘ahu are still within the Pliocene Epoch of the Neogene Period. The uniform lithology and young age of Hawaiian rocks are fascinating, particularly because the processes that create these rocks and shape the islands are both active and visible. 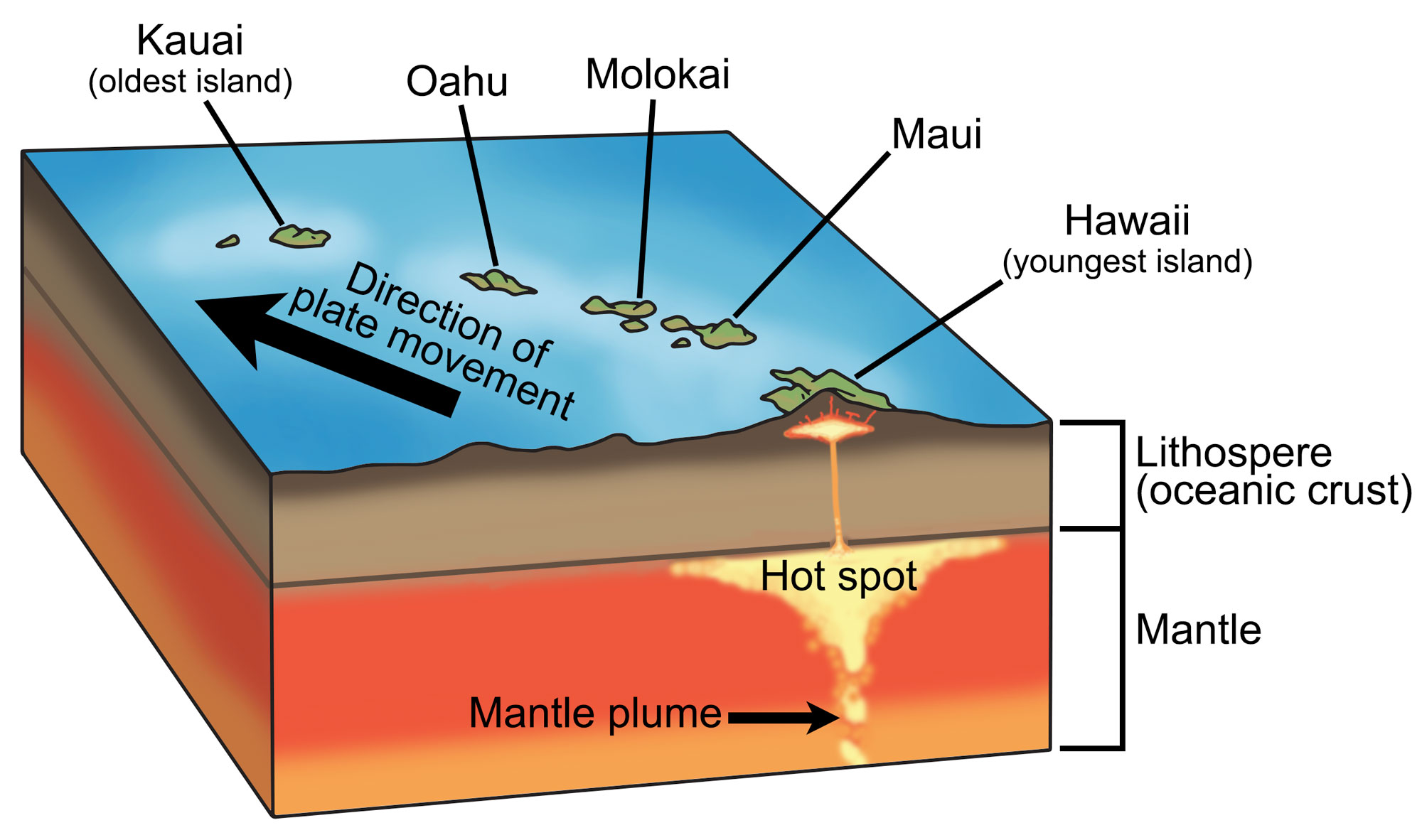 Diagram showing the hot spot beneath Hawaii. Magma rises up in a plume from the Earth's core, forming a magma in the upper mantle. The magma rises, causing volcanic activity on the surface. Hawaii is the youngest of the Hawaiian islands and active volcanism still occurs there. As the Pacific Plate continues to move, it will eventually be supplanted by another island. Modified from a diagram by Wade Greenberg-Brand (originally published in The Teacher-Friendly Guide to the Earth Sciences of the Western US, after a diagram by Tasa Graphic Arts, Inc.).

The eruptive behavior that has created the Hawaiian volcanoes is quite different from either mid-ocean ridge or subduction zone volcanism. 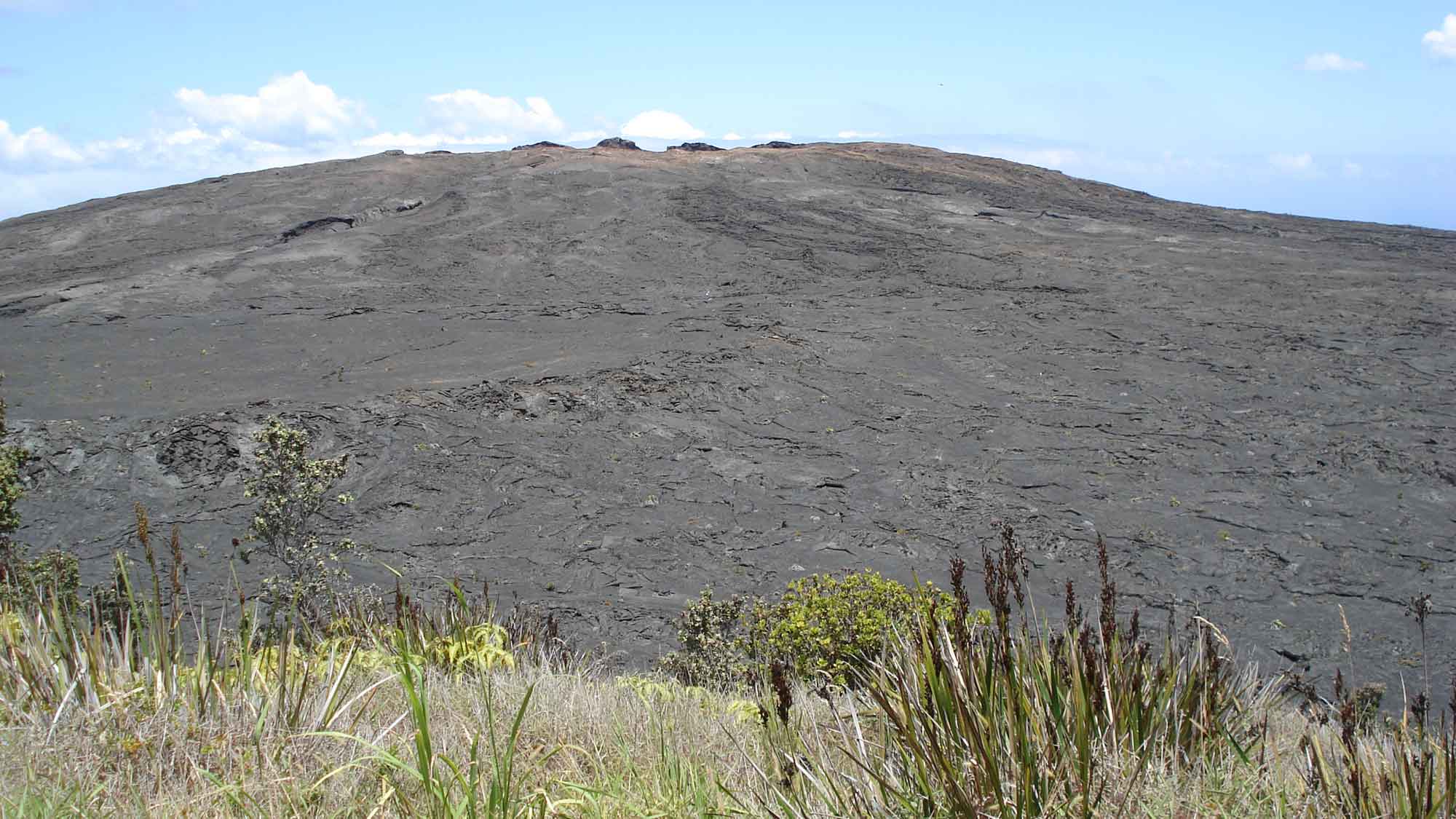 The low-viscosity magma under shield volcanoes flows quickly, resulting in the typical expansive size and gentle slopes of the volcano. Shield volcanoes can erupt from a summit vent, or through vents on the volcano’s flanks. Typically, a volcano will have one or more rift zones: linear arrays of vents extending away from the summit. Magma can migrate away from the summit vent through a series of fractures that create the rifts.

Oceanic hot spot eruptions are characterized by lava fountains that feed subsequent lava flows. Lava fountains are spectacular, but on the scale of global volcanism, they are considered gentle and effusive. 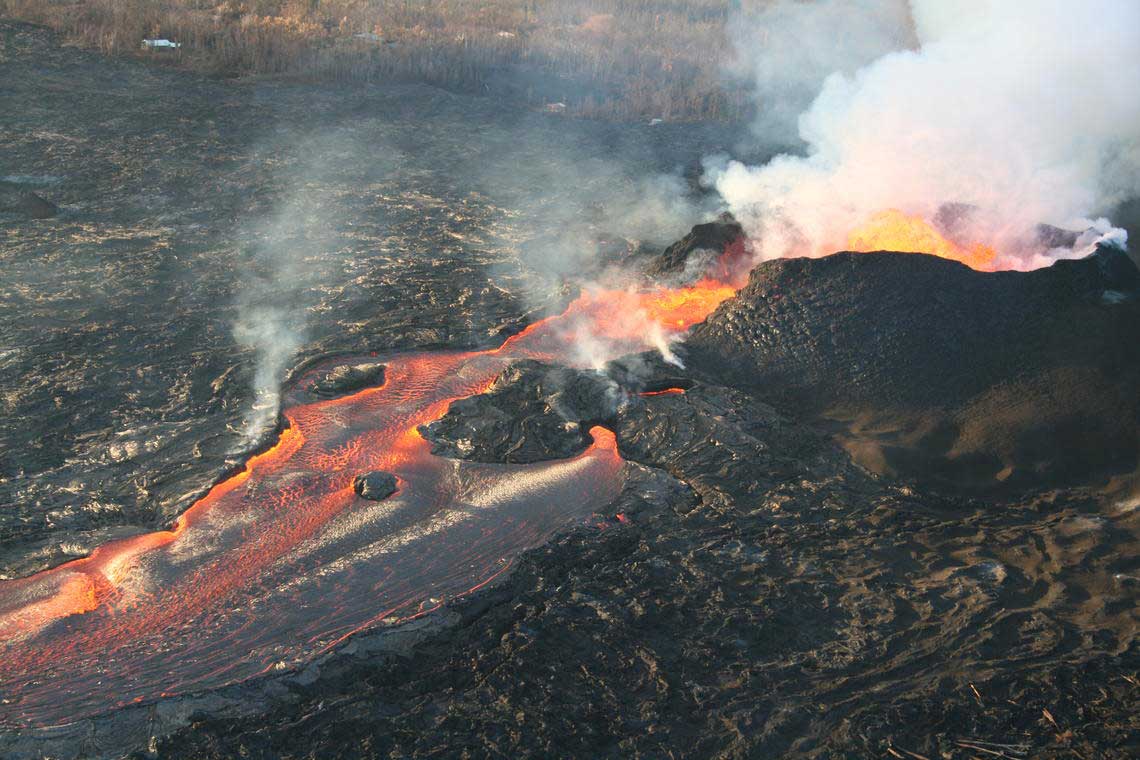 A vent erupts a fountain of lava that feeds a channelized lava flow in this 2018 eruption on Kīlauea (Fissure 8). The dark color of the flow in the lower portion of the photo shows how quickly the surface of the molten lava freezes when in contact with air, while liquid lava continues to flow beneath the chilled crust. Photograph by the USGS (public domain).

During the fountaining phase of an eruption, various types of pyroclastic particles form. Lava fountains produce abundant cinders: gas-rich lava droplets that cool as they fall. Well-formed glassy droplets of cooled lava are known as Pele’s tears, after the Hawaiian goddess of fire and volcanoes. 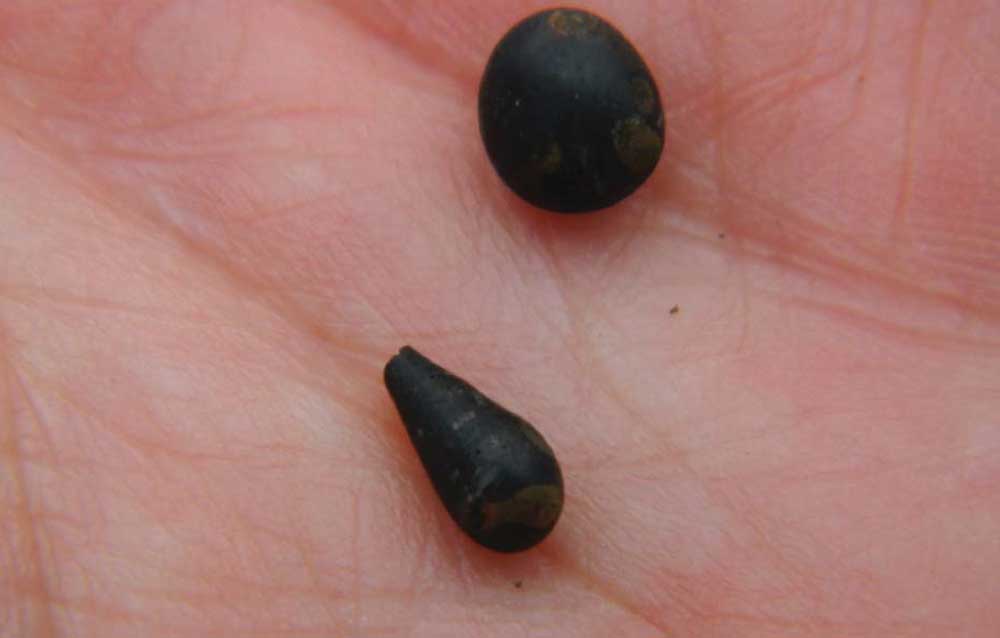 Pele’s tears, Pele’s hair, cinders, and bombs are common tephra forms found near Kīlauea volcano. Basaltic lavas have two characteristic modes of motion that produce two very different textures after the flows harden. These textures are controlled by the eruption and effusion rate of the lava, as well as by its viscosity (controlled by temperature and gas content) and strain rate (usually controlled by topography).

Pahoehoe results from the rapid motion of highly fluid basalt. It cools into smooth glassy flows, or can form fantastic, twisted, ropey shapes. 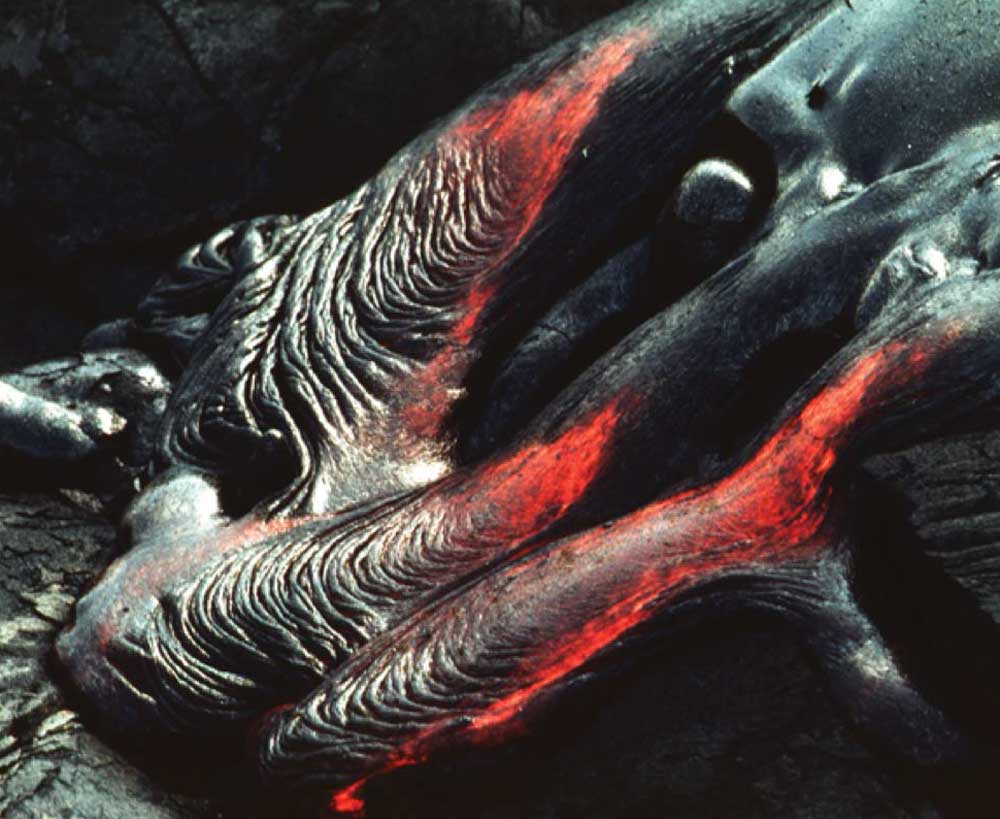 The skin on a pahoehoe flow is deformed by the motion of the underlying molten lava. The resulting texture is ropey and lumpy. Photograph by Alexandra Moore. 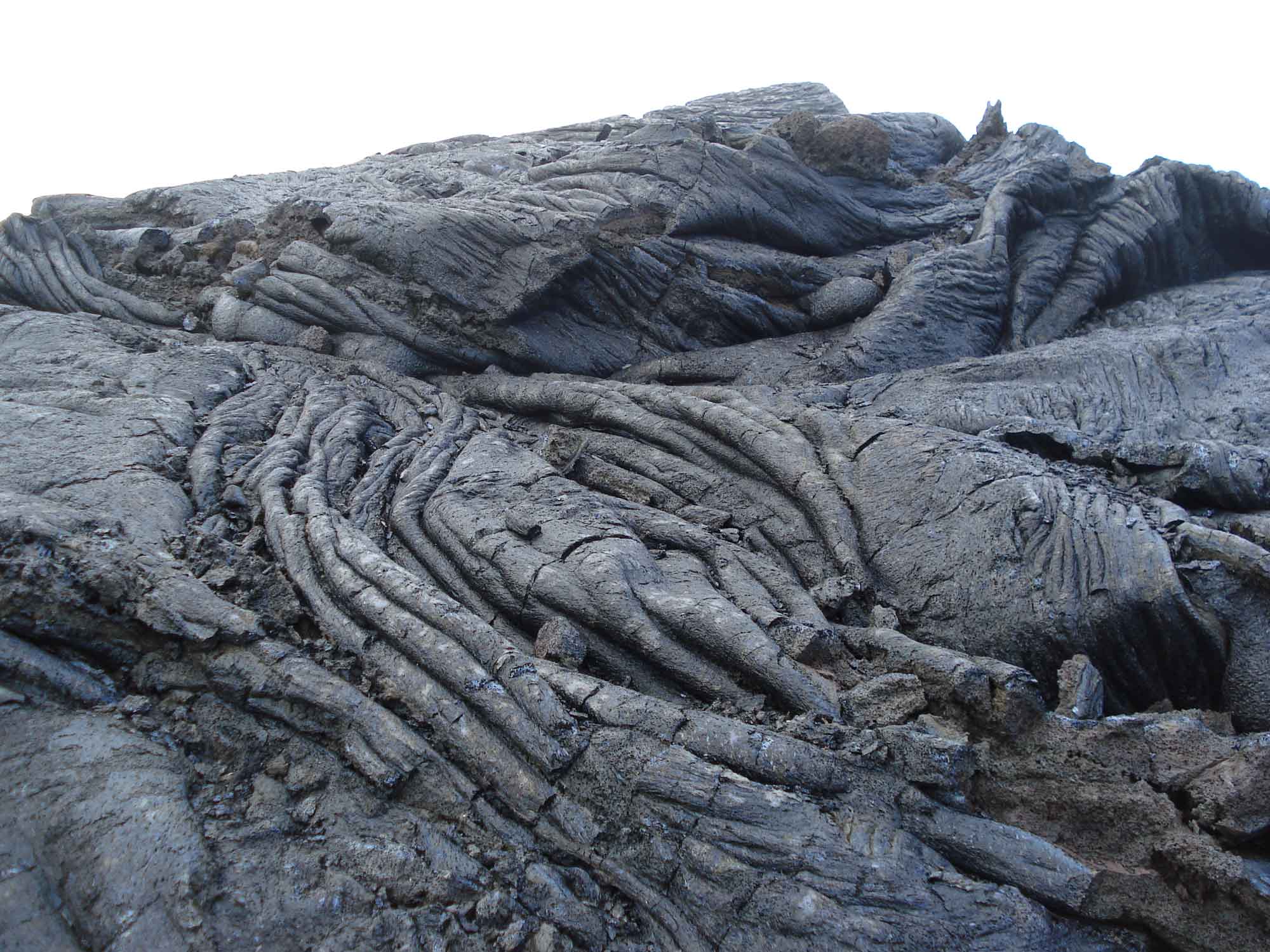 Pahoehoe is formed from lava that has a low viscosity and strain rate, as well as a low rate of gas effusion.

‘A‘a flows are dense and blocky, and advance as a more massive front of hardened fragments. Cooled ‘a‘a is a jagged landscape of sharp lava rubble.

‘A‘a is produced by lava that has a high viscosity and strain rate, as well as high gas effusion. Both ‘a‘a and pahoehoe have the same basic chemistry, and one type of flow can transition to the other during an eruption.

Highly fluid lava can move as a broad flow with many advancing pahoehoe fingers, or it may channelize in a narrow lava river. Since the ambient air temperature is hundreds of degrees lower than the temperature of the flow (1100° C [2000° F]) the flow forms a skin of cooled lava almost immediately after leaving the vent. As long as lava is supplied from the vent, however, the flow will continue to advance beneath the cooled skin. A broad, slow-moving pahoehoe flow will advance by inflating the surface from beneath until molten lava spills out below the frozen skin. Alternately, a narrow lava river creates a well-defined lava tube through which fast-moving lava can flow—often over distances of tens of kilometers (miles). The cooled skin is an excellent insulator for the lava flowing beneath, so basaltic lava flows can quickly advance from the volcano summit to the sea. When the eruption ceases, lava will drain out of the tube, leaving behind an empty chamber. Lava tubes are a common feature of the Hawaiian landscape, and they occur on all scales, from large tubes tens of kilometers (miles) long, to the very small, ubiquitous tubes seen in every roadcut.

Although Hawaiian volcanoes are known for their effusive eruptions, there are also occasional episodes of more violent explosive behavior. When groundwater interacts with a magma chamber, the high temperatures cause water to flash into steam, initiating an explosive eruption. In this case the energy of the eruption shatters the lava into tiny particles of volcanic ash. Layers of ash are widespread and are found in volcanic stratigraphy across the islands. 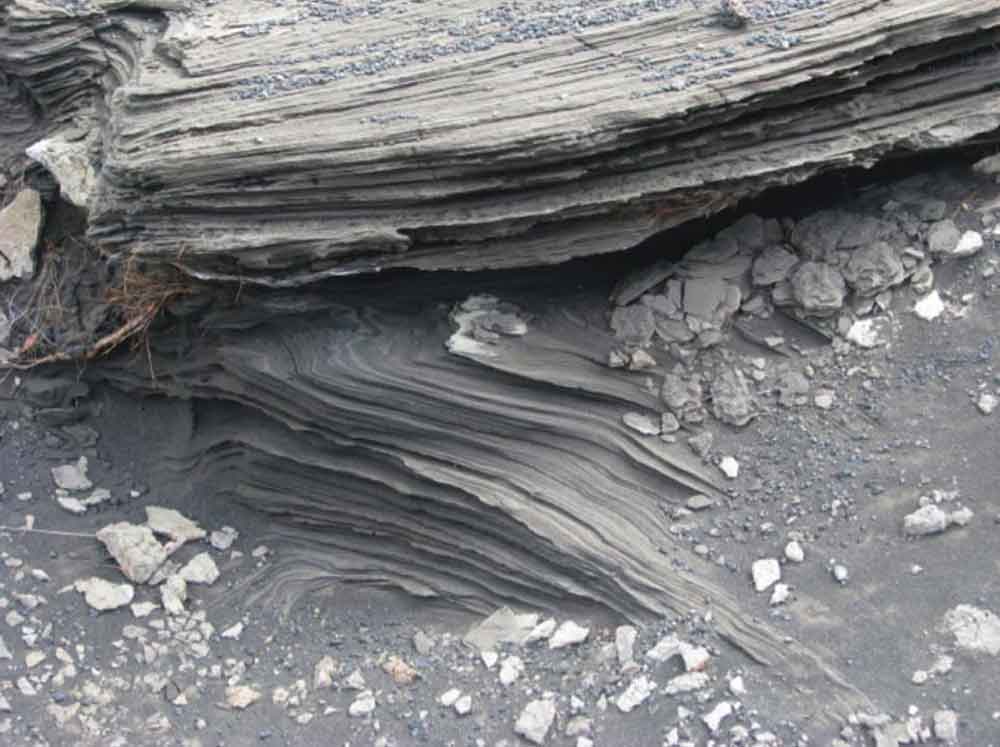 Ash from an explosive eruption of Kīlauea. Photograph by Gary Lewis.

On Hawai‘i Island the distribution of Kīlauea’s ash deposits clearly indicates that some eruptions were powerful enough to blast ash above the trade wind inversion into the west winds of the jet stream. Closer to the volcanic vent wall, rocks can be blasted from the caldera or vent wall itself.

Metamorphic rocks are uncommon in Hawai‘i and are represented by only a few occurrences of contact metamorphism. Sedimentary rocks are more widespread. Conglomerates and alluvial deposits can be found in stream valleys and in some deposits near the ocean. 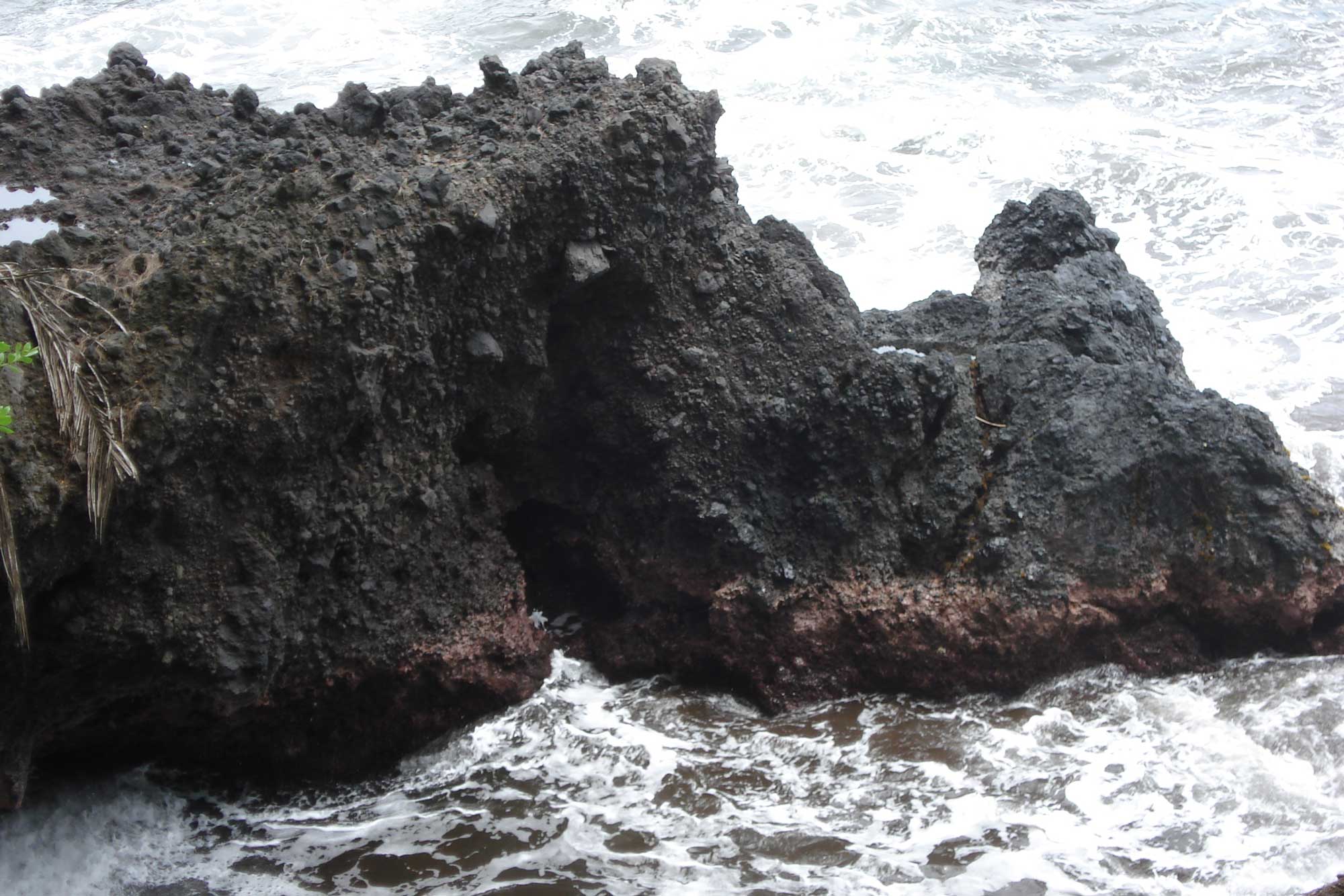 Conglomerate composed of basalt cobbles on the Big Island of Hawai‘i. Photograph by Jonathan R. Hendricks.

The most common sedimentary rocks in Hawai‘i, however, are marine limestone and calcareous sandstone. Colonial coral polyps build calcareous skeletons that create Hawai‘i’s beautiful reef ecosystems. Because corals live close to the ocean surface, reefs are highly susceptible to changes in sea level. Both relative and absolute sea level changes can leave reefs quite literally high and dry. Wind and wave action erode the exposed reef to form large quantities of carbonate sand and dunes. During times of particularly high sea level, water movement pushes these dunes inland where they are lithified and preserved. 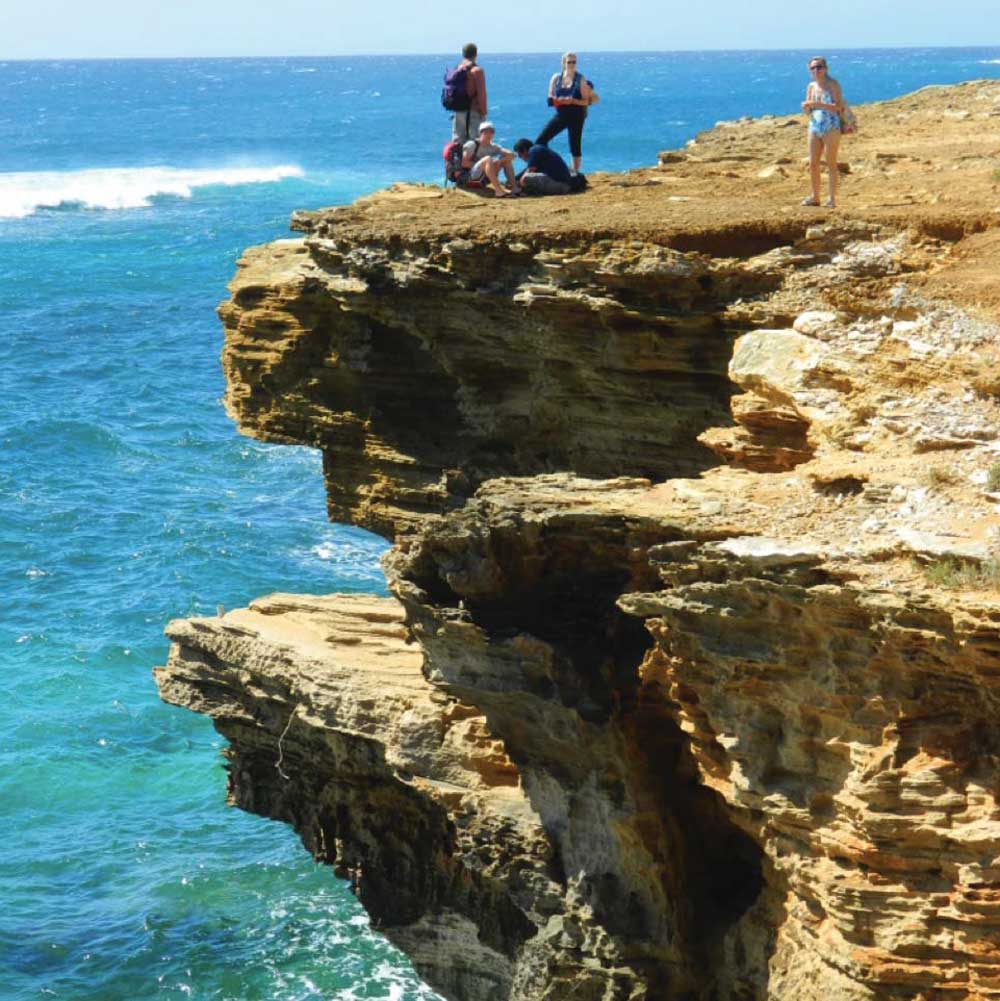 Sedimentary rocks on Kaua‘i. These lithified dunes range in age from 4000–350,000 years before present. Photograph by Alexandra Moore.

These aeolian (wind-formed) sandstones are most extensive on the older islands but can occur even on young Maui. The ancient dunes are highly fossiliferous and record the range and variation of Hawai‘i’s extinct flora and fauna.