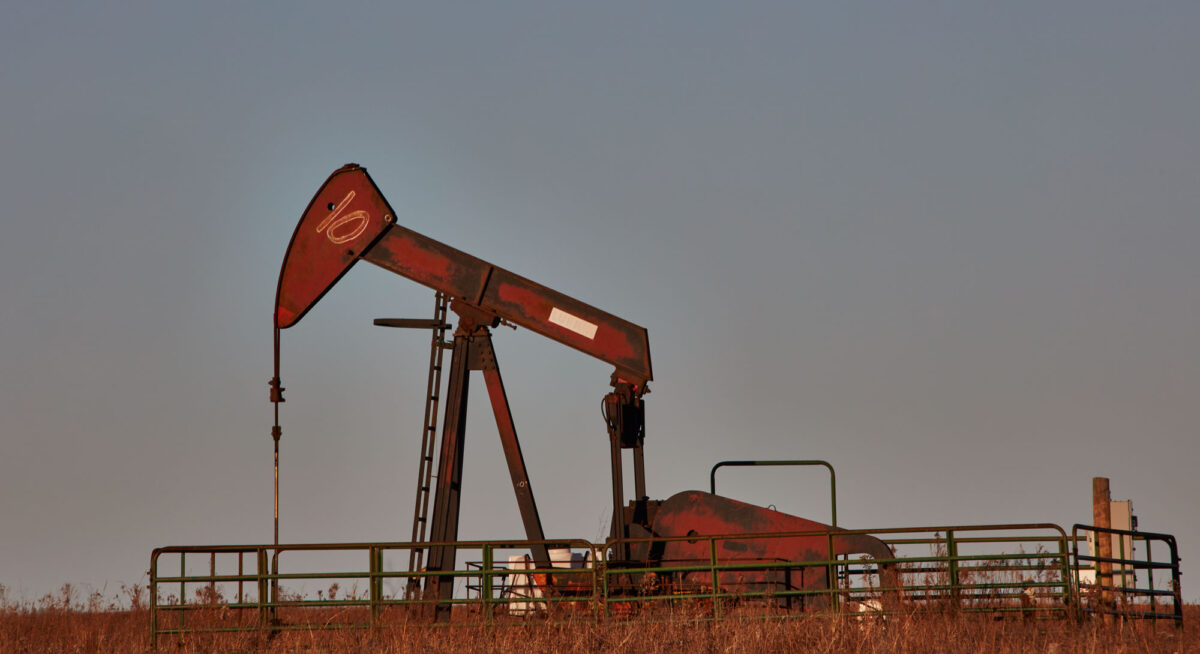 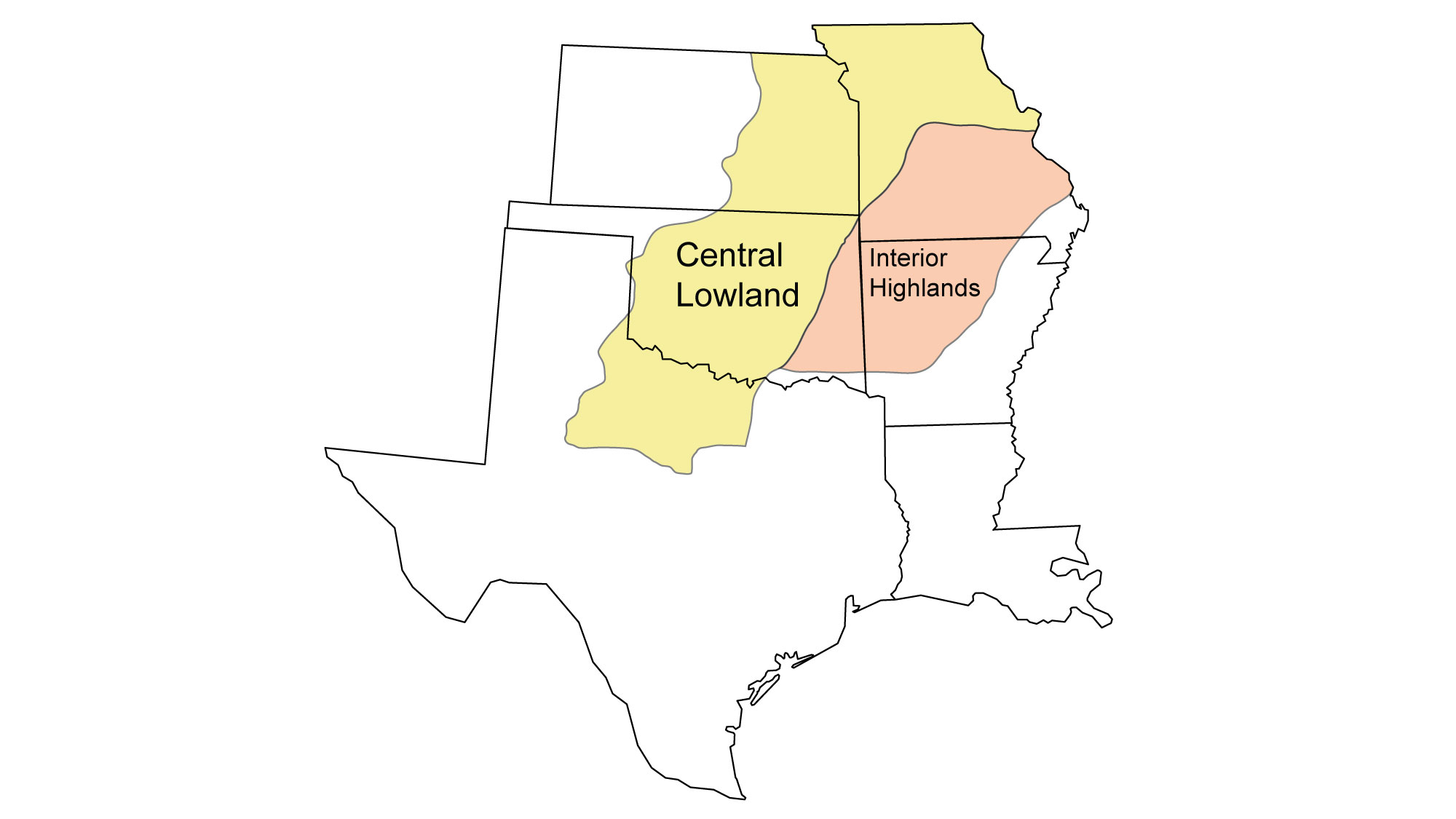 Page snapshot: Introduction to energy in the Central Lowland and Interior Highlands regions of the south-central United States, including fossil fuels, renewable energy, and nuclear power.

Credits: Most of the text of this page comes from "Energy in the South-central US" by Carlyn S. Buckler and Robert M. Ross, chapter 7 in The Teacher-Friendly Guide to the Earth Science of the South Central US, edited by Mark D. Lucas, Robert M. Ross, and Andrielle N. Swaby (published in 2015 by the Paleontological Research Institution; currently out of print). The book was adapted for the web by Elizabeth J. Hermsen and Jonathan R. Hendricks in 2022. Changes include formatting and revisions to the text and images. Credits for individual images are given in figure captions.

Ancient sedimentation patterns and tectonic activity have favored the formation of widespread fossil fuel resources in this region. Organic-rich sediments were deposited in Paleozoic inland seas that spread across much of the region. In addition to the infrastructure associated with the extraction of fossil fuel resources, oil refineries, coal, and natural gas plants dot the Central Lowland from Missouri through Texas. Parts of the Central Lowland also favor the production of wind energy.

Even though the Interior Highlands produces the most hydroelectricity of all regions in the south-central U.S., the power generated by these plants pales in comparison to that produced by the region’s fossil fuel-powered facilities. Overall, coal is the major source of power for the Interior Highlands, providing the region with over ten times more electricity than hydropower. A minor amount of fossil fuel resources exist within the Arkansas Valley. The southern part of the region supports several refineries. 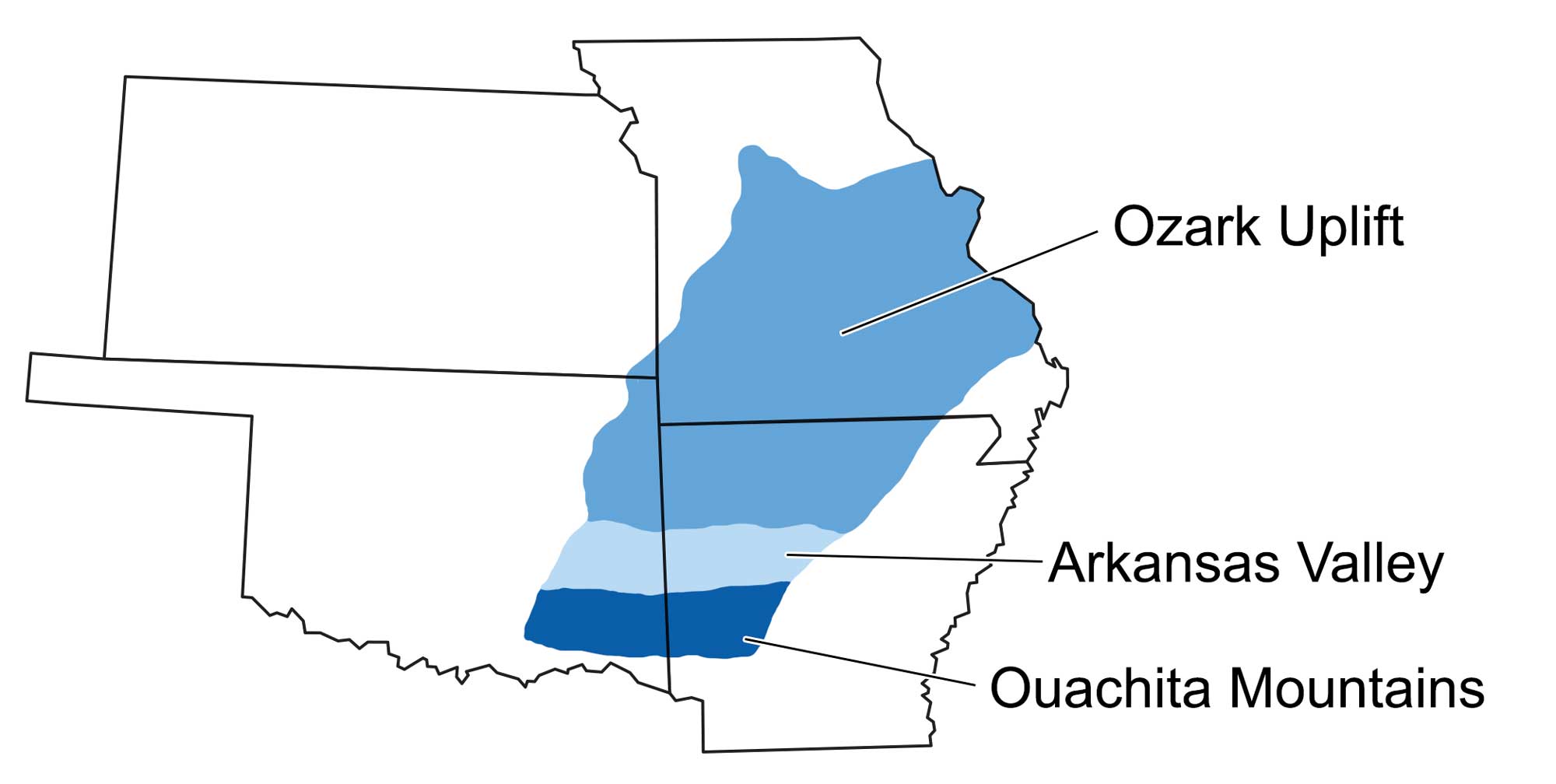 The Central Lowland is home to several basins with thick sections of late Paleozoic fossil fuel-bearing deposits, including the Forest City and Cherokee Basins in Kansas, the Arkoma and Anadarko Basins in Oklahoma, and the Fort Worth Basin in northern Texas.

It is possible to make sense of why we find petroleum and natural gas in these areas by understanding the history of marine environments. Mud with relatively high organic matter content tends to accumulate in shallow continental seas and in coastal marine environments, especially beyond the mouths of large rivers. The south-central U.S. has long been home to both of these environments. In the Paleozoic when organic-rich sediments that became oil and gas source rocks formed, the oil and gas basins of the south-central U.S. were situated along the southern part of Laurentia, covered by a shallow sea.

Oil and gas reservoir rocks in the Central Lowland include both sandstones and carbonate rocks. In this area, many reservoir rocks can be accessed through one well due to the large thicknesses of sedimentary rocks in the many depositional basins. A number of the reservoirs are Pennsylvanian in age, often covering thousands of meters of sandstone and shale.

In the Interior Higlands, natural gas and oil are extracted from sandstones that were deposited in early Pennsylvanian river systems and deltas. 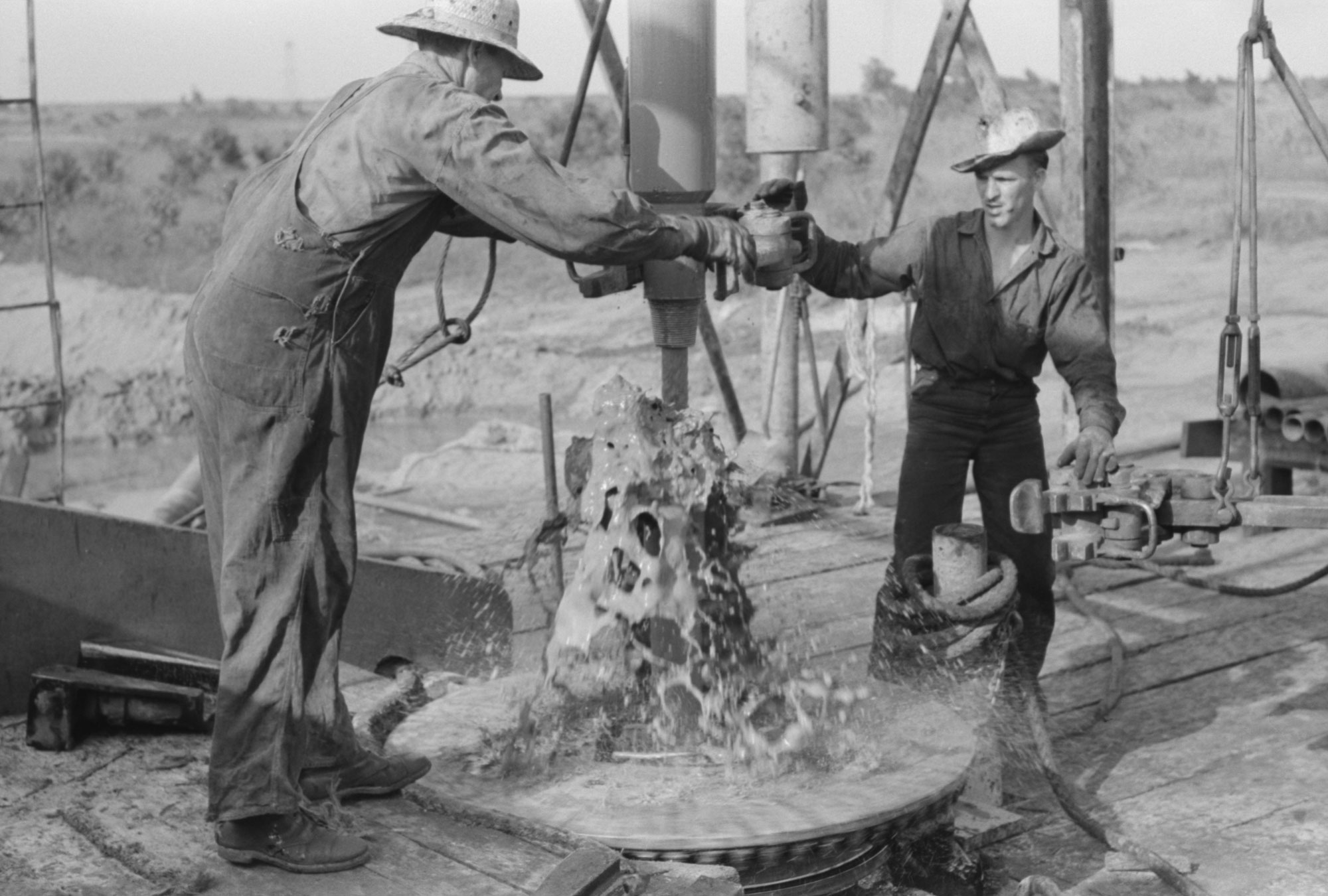 Since the early 2000s, horizontal drilling has been combined with a method to fracture rocks beneath the surface, releasing gas and oil trapped in source rocks that have very low permeability. Hydraulic fracturing (or simply “fracking”) has both greatly increased the accessibility of available fossil fuel resources and stirred controversy due in part to its impacts on the environment.

The Fort Worth Basin is best known today for the Barnett Shale, an organic-rich shale of Mississippian age. Like other such shale gas layers, the Barnett Shale was originally mud that accumulated on a poorly oxygenated ocean bottom. The Barnett Shale made international news because horizontal drilling and hydraulic fracturing were first used together to extract natural gas from this shale. The Barnett Shale extends to the southwest into the Permian Basin, part of the Great Plains region.

Another gas-yielding shale is the Woodford Shale in Oklahoma, which is mostly late Devonian and partly early Mississippian in age. The most productive geological units of this shale are found in the Arkoma Basin of southeast Oklahoma, but they do extend west into the Anadarko Basin.

As fracking has become more common, Oklahoma in particular has been impacted by induced earthquakes, or earthquakes caused by human activities. Typically, these earthquakes are triggered not by fracking itself but by the disposal of wastewater, which is mostly produced water (contaminated water extracted with oil and gas). This wastewater is pumped back into the Earth through injection wells, which can cause movement along underground faults. Such earthquakes may especially be a problem in areas where buildings have not been constructed to withstand shaking. 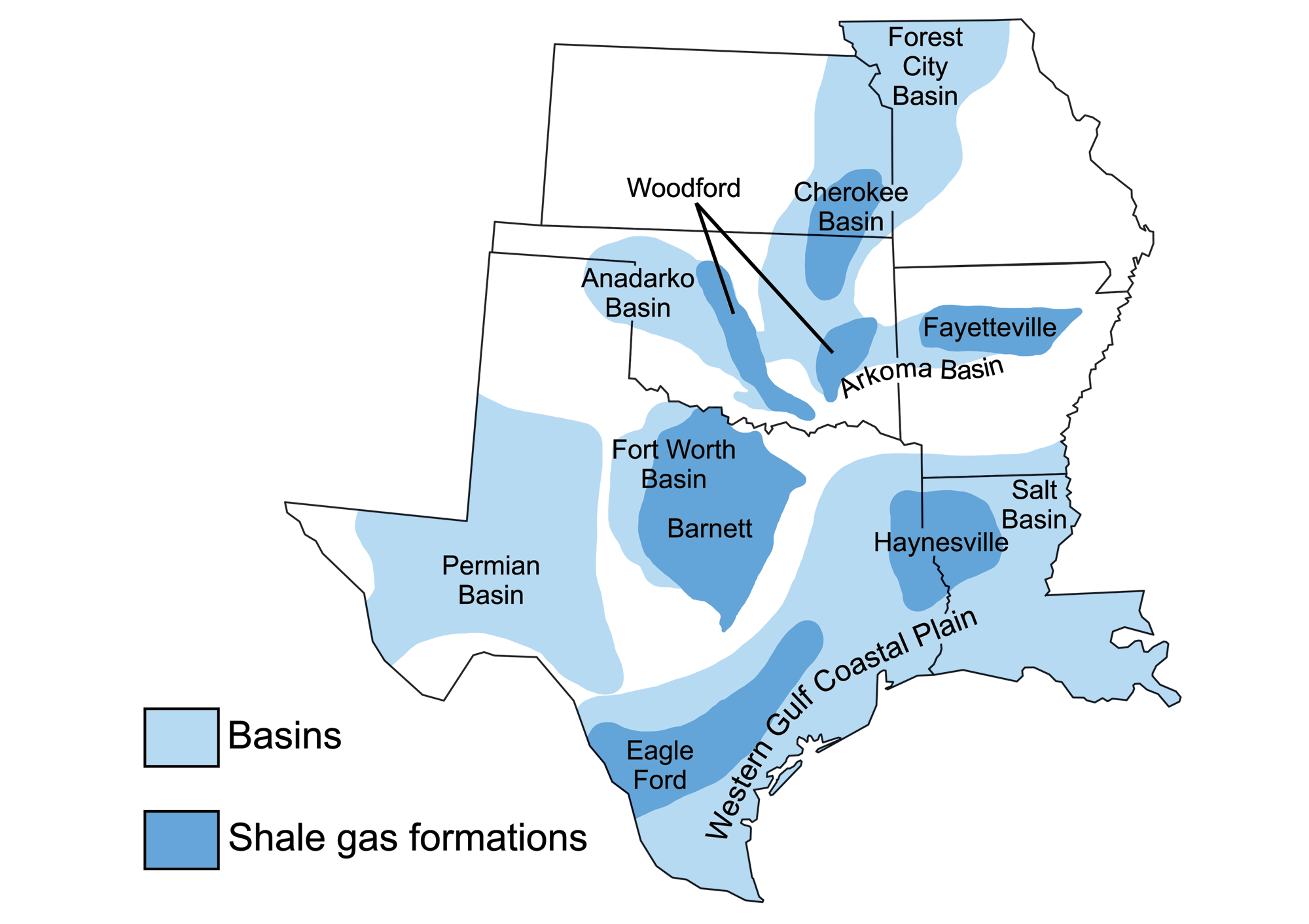 Sedimentary basins containing significant fossil fuel accumulations, and the area of these basins covered by shale formations in which horizontal drilling and hydraulic fracturing are used. Map by Wade Greenberg-Brand (adapted from image by U.S. Energy Information Administration), originally published in The Teacher-Friendly Guide to the Earth Science of the South Central US, modified for [email protected]

Oklahoma Area Sesmicity, 1973 to June 2017. The circles are the location of earthquakes. The color of each circle indicates when it happened (blue = 1973–2009, yellow = 2010–2011, orange = 2012–2014, green = 2015–June 2017), and the size indicates the magnitude (power) of the earthquake (smaller circles = weaker earthquakes, larger circles = stronger earthquakes). The background shading indicates the chance of earthquake damage in a given area in 2017, with the lighter colors indicating less risk and darker colors indicating more risk. The increase in earthquakes over time is linked to pumping of saltwater (mostly produced water) into injection wells. Source: USGS (public domain). 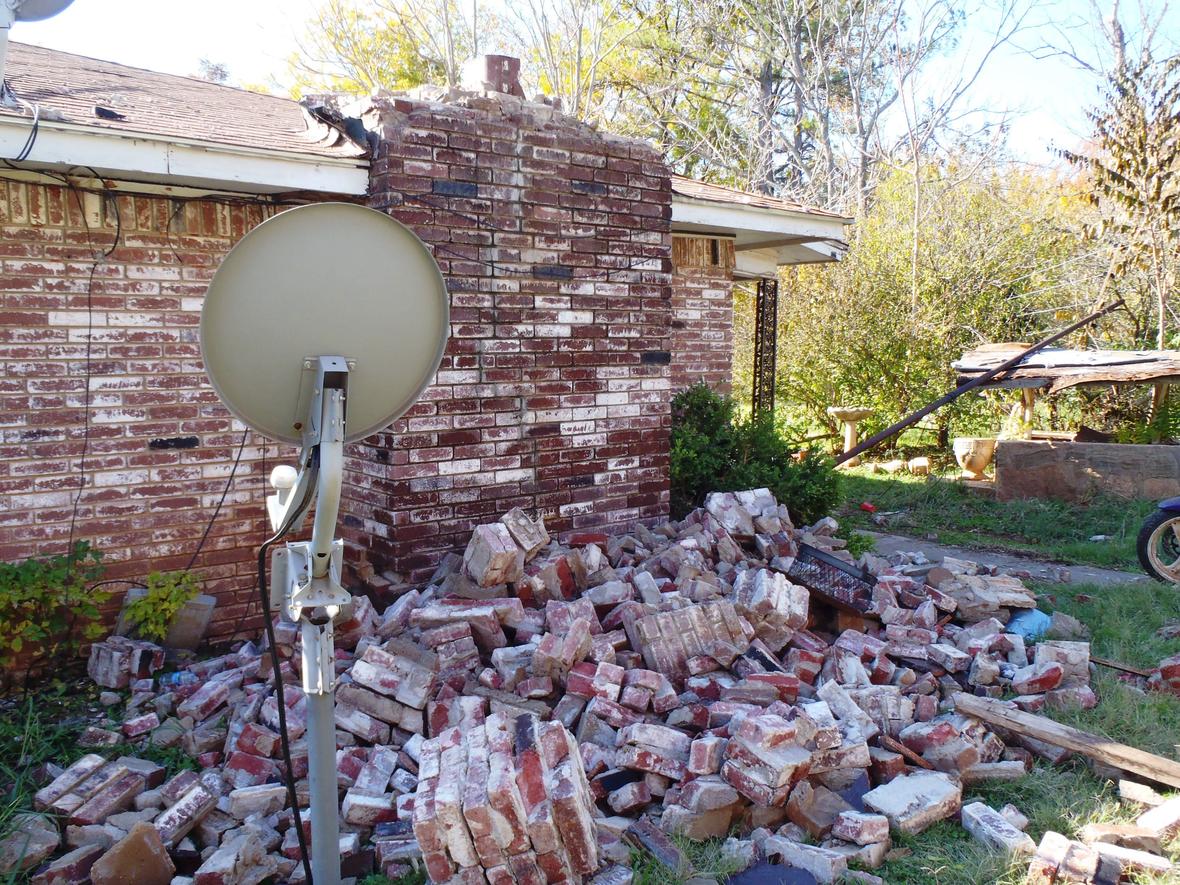 Original description from the USGS: "House damage in central Oklahoma from the magnitude 5.6 earthquake on Nov. 6, 2011. Research conducted by USGS geophysicist Elizabeth Cochran and her university-based colleagues suggests that this earthquake was induced by injection into deep disposal wells in the Wilzetta North field." Photo by Brian Sherrod, USGS.

The Central Lowland has coal deposits. In the Paleozoic, coastal deltaic swamps and Paleozoic forests provided plant matter that, upon submergence and burial, eventually produced deposits of coal. In the southern Central Lowland, bituminous coal deposits are found in Pennsylvanian-age rocks that are stratigraphically above (and thus younger than) the gas-producing Barnett Shale in the Fort Worth Basin of Texas. Bituminous coal deposits of similar age are mined to the north in the Midcontinent Basin, sometimes known as the “Western Interior Coal Region,” which covers parts of eastern Oklahoma and Kansas and western Missouri, as well as the tip of eastern Nebraska and southern Iowa. These thin coal seams are deposited in cycles of marine and terrestrial sediments known as cyclothems. 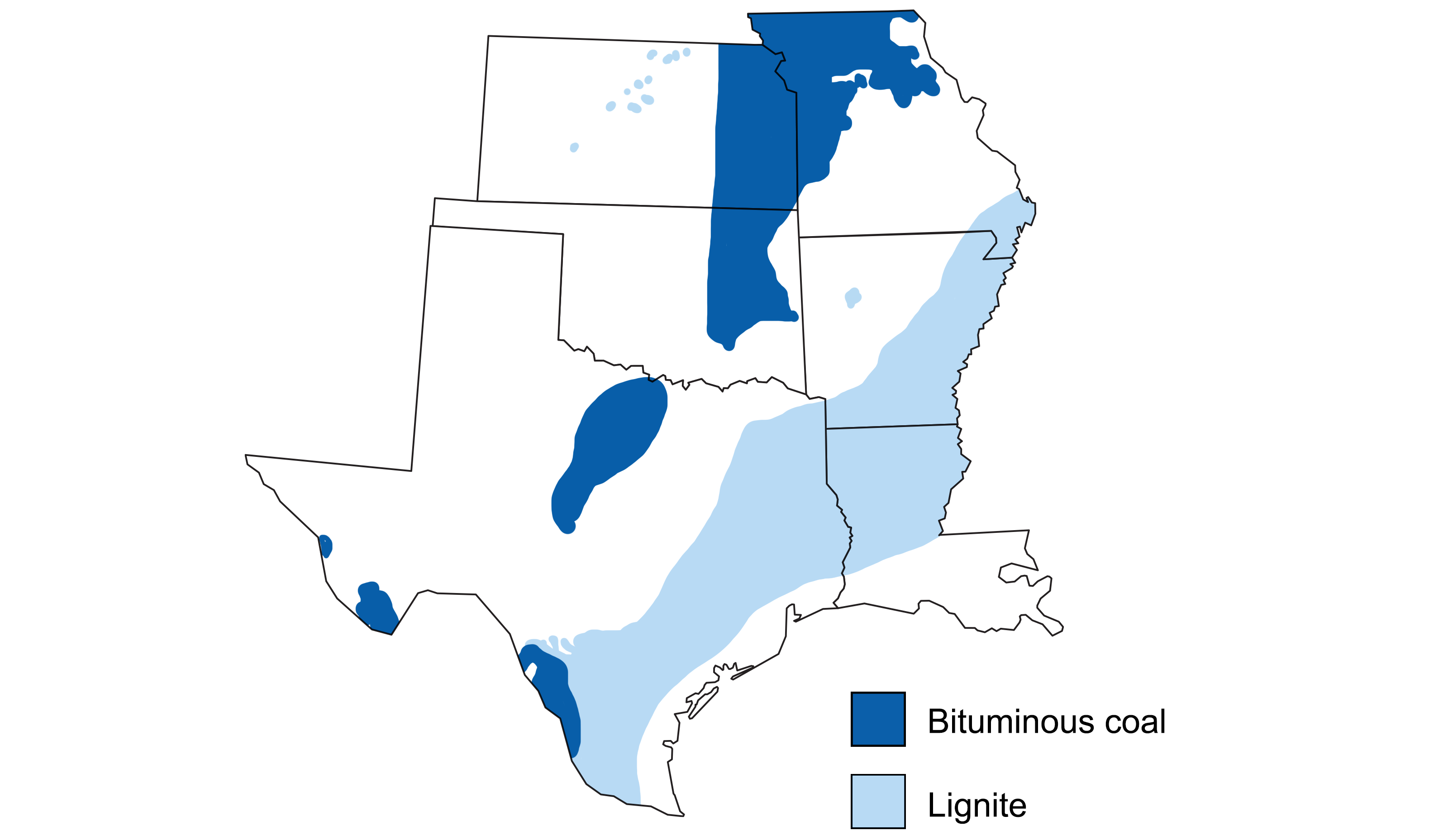 Areas with significant coal resources in the south-central U.S. Modified from a map by Wade Greenberg-Brand (adapted from an image by USGS, originally published in The Teacher-Friendly Guide to the Earth Science of the South Central US). 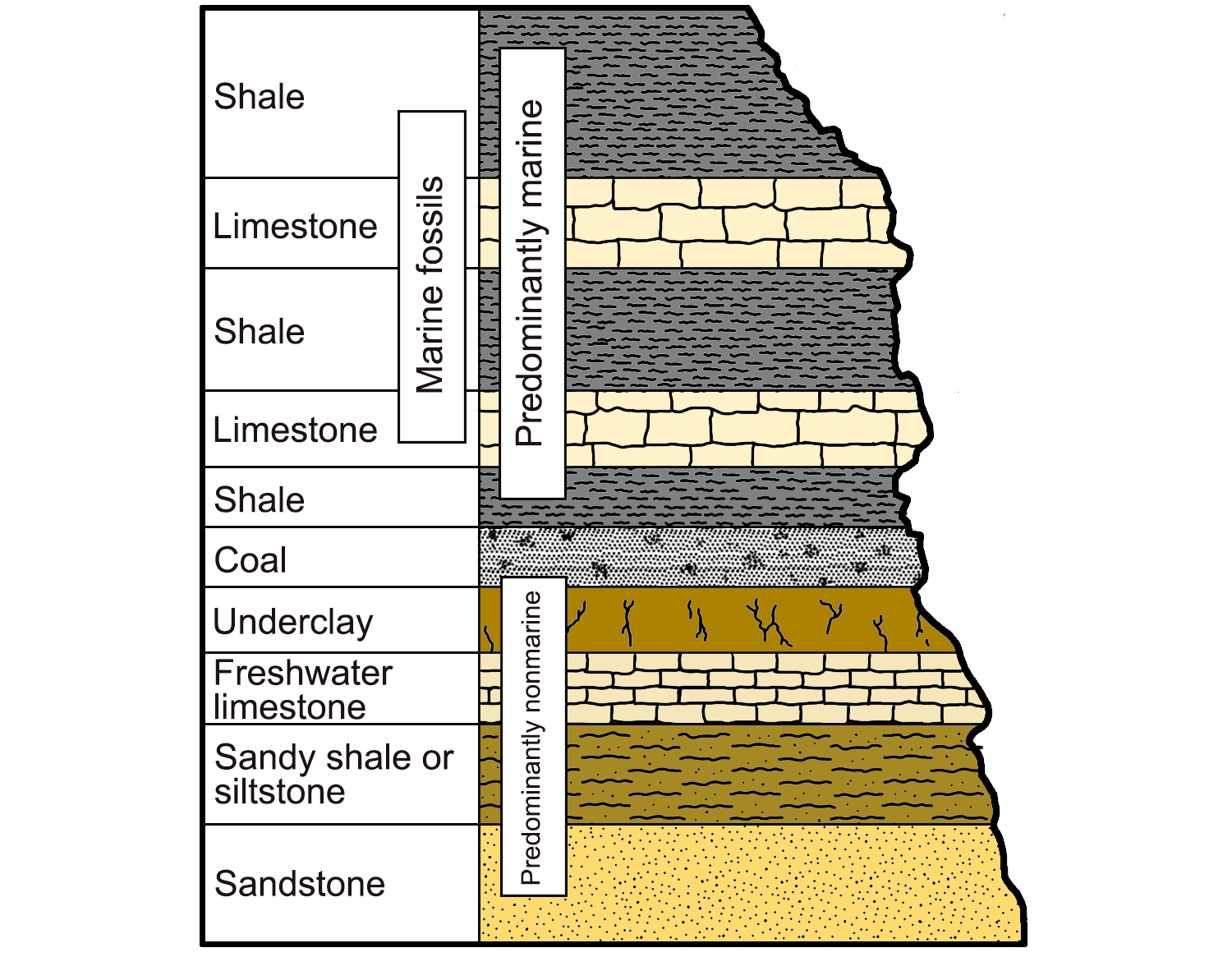 Bituminous coal in the Central Lowland was mined heavily, especially in the early 1900s. Coal was mined mostly from relatively thin Pennsylvanian-age beds (“seams”) near the surface. Such thin, shallow coal seams were excavated using electrically-powered mining shovels to scoop enormous quantities of fragmented rock and overburden. West Mineral, a town in southeastern-most Kansas, is home to Big Brutus, a 49-meter-tall (160-foot-tall) giant stripping shovel designed to dig coal from depths of 6 to 21 meters (20 to 69 feet). Although it is not the largest such shovel ever built, it was the second largest of its kind in operation during the 1960s and 1970s.

In the joint Central Lowland-Interior Highland region, additional coal-bearing units are found in the Arkoma Basin, covering parts of western Arkansas and eastern Oklahoma. These are known especially for “coalbed methane,” natural gas extracted from coal deposits several hundred meters below the surface. 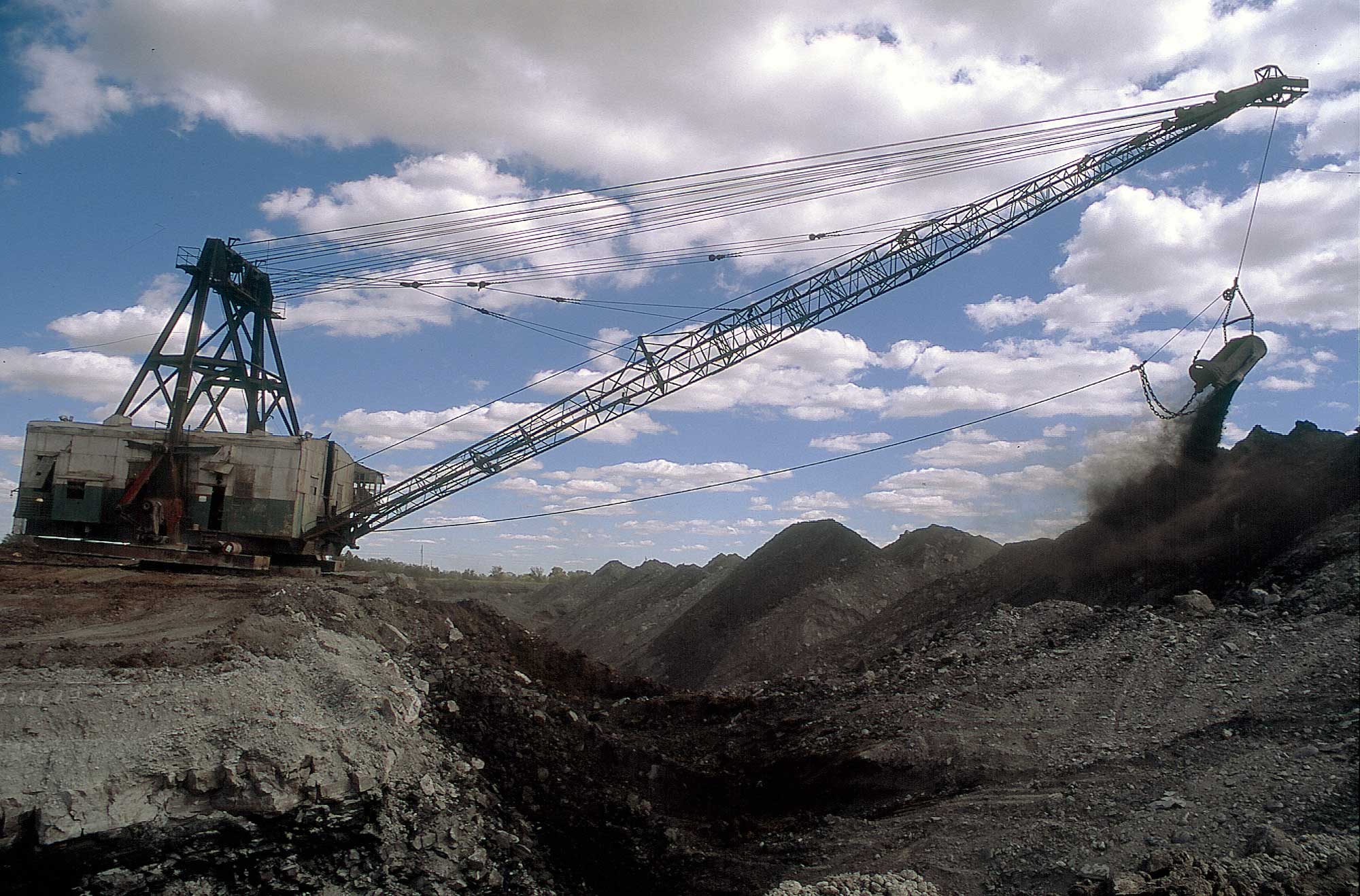 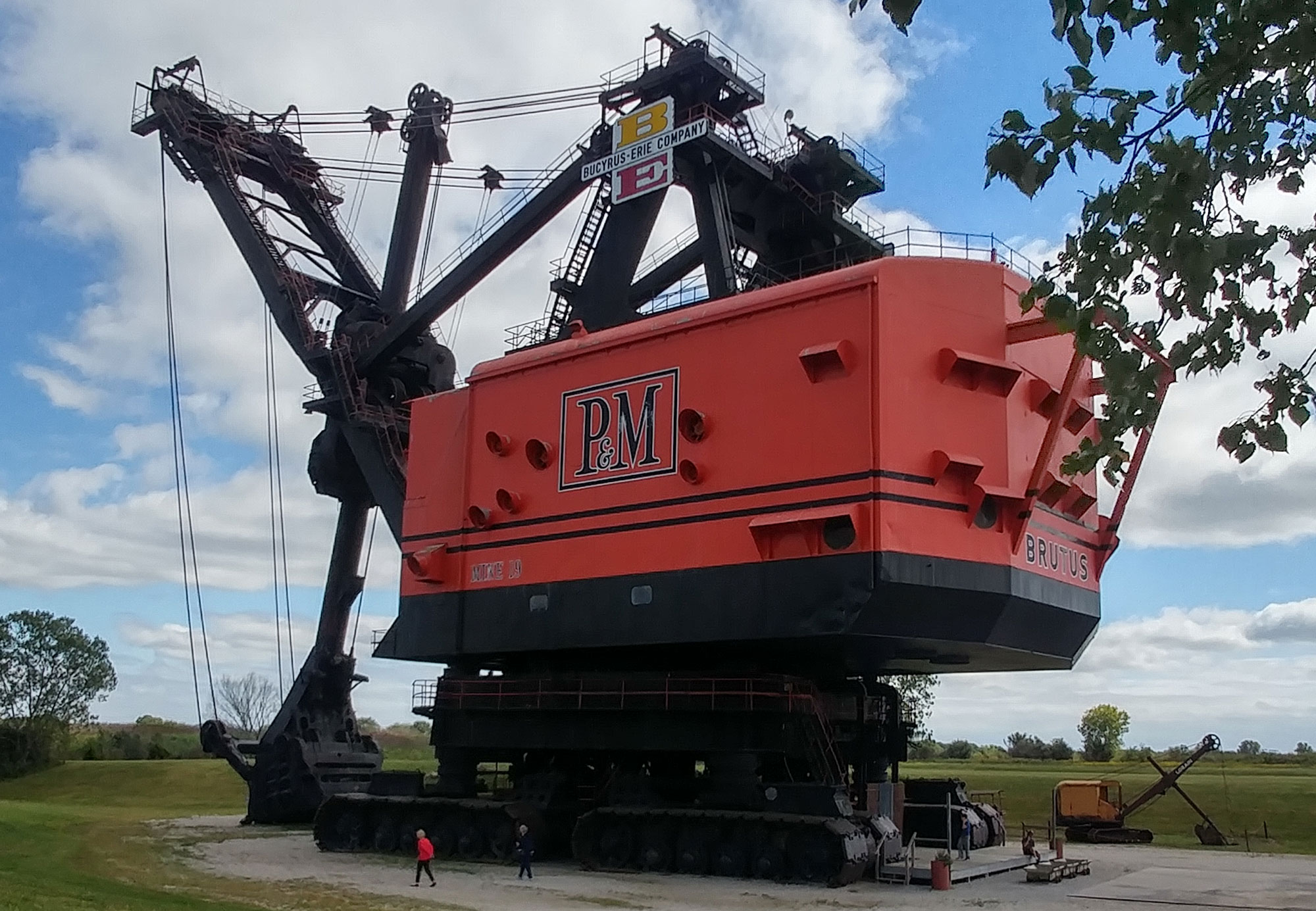 Big Brutus, a 49-meter-tall (160-foot-tall) giant stripping shovel used in the 1960s and 1970s to mine coal in southeastern Kansas. Today, it has been preserved as a national landmark and is the largest electric shovel still in existence. Photo by Jessicarhein (Wikimedia Commons, Creative Commons Attribution-ShareAlike 4.0 International license, image cropped and resized).

Precipitation and the relatively high topographic area associated with the Ozark Uplift provide the region with great potential for hydroelectric power, which uses the gravitational force of falling or rushing water to rotate turbines that convert the water’s force into energy. More than 30 small- to medium-sized hydroelectric plants (from less than 2 to almost 400 megawatts) are distributed along the Arkansas, White, and Buffalo rivers in Arkansas, eastern Oklahoma, and southern Missouri. Almost all of these power plants are located within the Ozark Plateau. One exception is Arkansas Electric Coop’s 35 MW capacity Dam 2, which sits near the confluence of the Arkansas and Mississippi rivers.

There are also three pumped storage facilities within the region, where water is pumped uphill into reservoirs in times of excess production, essentially acting as batteries. These are larger in capacity than most of the power plants, ranging from 186 MW to 440 MW. 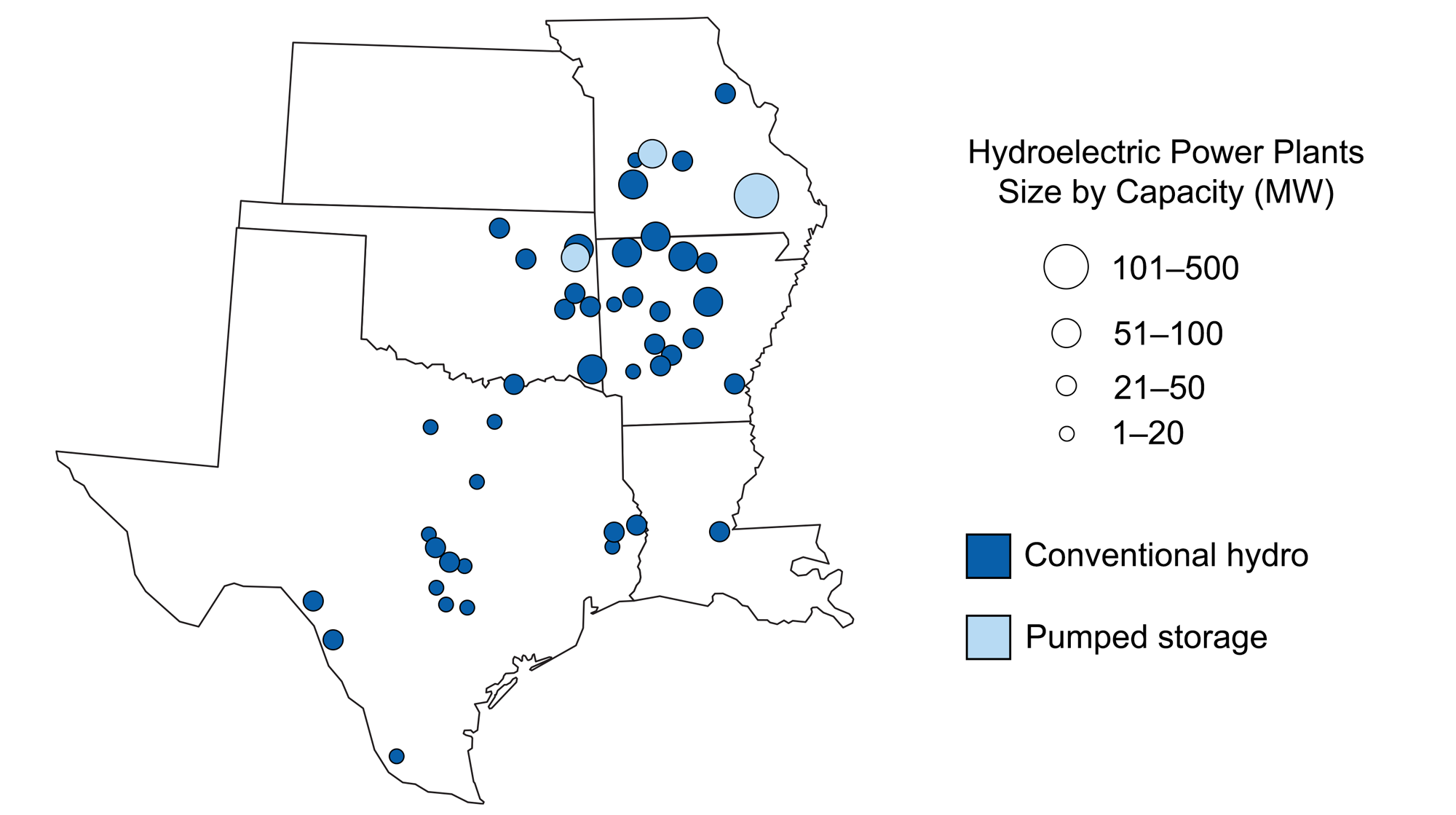 Hydroelectric plants in the south-central U.S. Map modified for [email protected] from a map by Wade Greenburg-Brand (adapted from an image by the U.S. Energy Information Administration, originally published in The Teacher-Friendly Guide to the Earth Science of the South Central US). 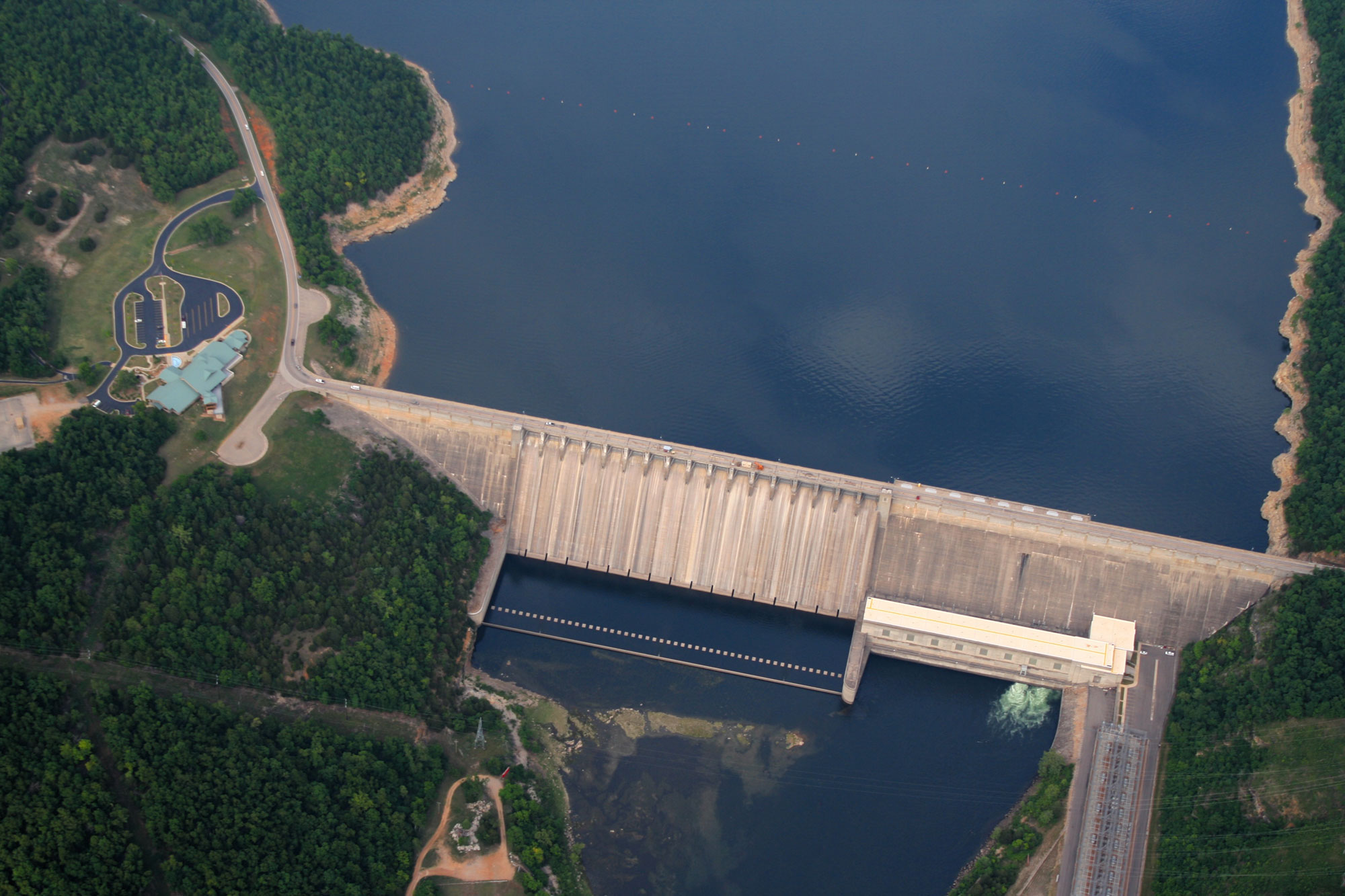 The only major nuclear power plant in the region is the Callaway Nuclear Generating Station in Auxvasse Township in Missouri. This plant, which began operating in 1984, produces about 1300 MW, which is 9% of the state’s energy consumption. In 2012, the plant entered a proposal to build a second tower, which would more than double its capacity. 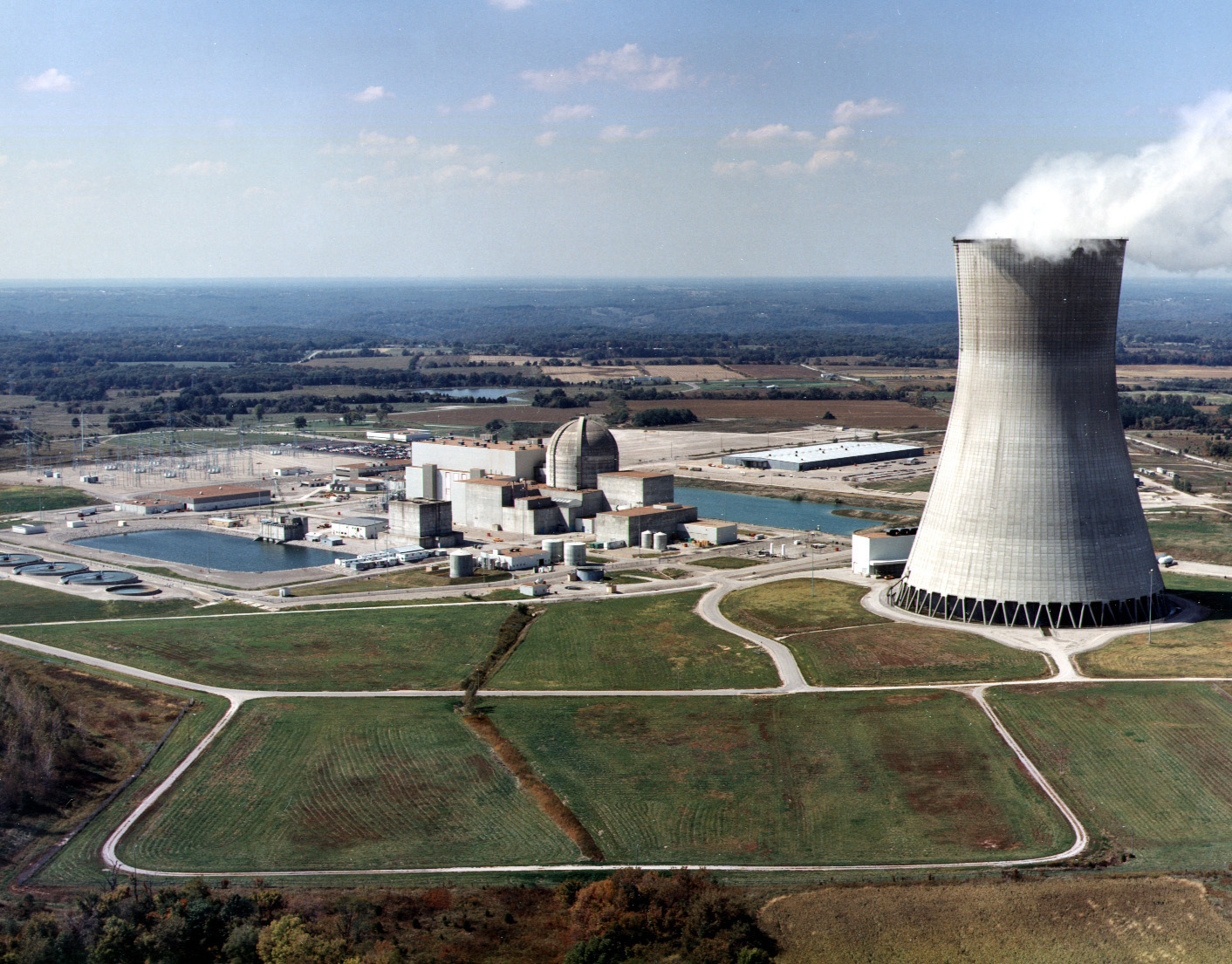