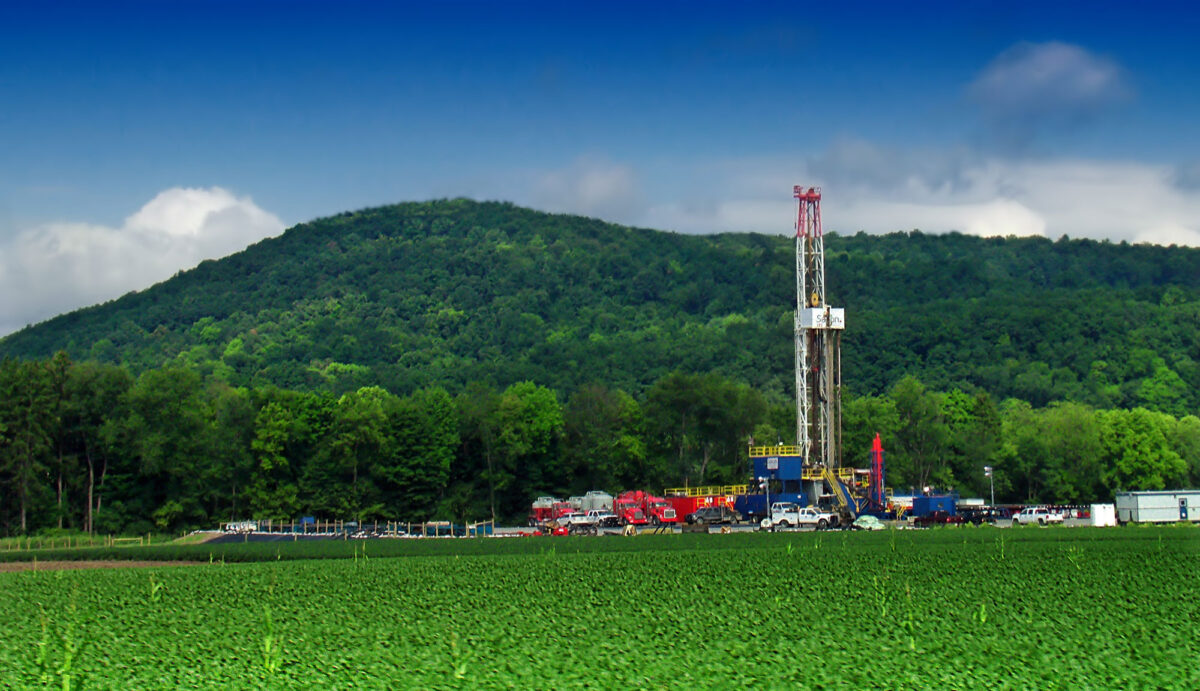 Credits: Some of the text of this page comes from "Non-Mineral Resources of the Northeastern US," chapter 7 in The Teacher-Friendly Guide to the Geology of the Northeastern U.S. by J. E. Ansley (published in 2000 by the Paleontological Research Institution, reprinted in 2016; currently out of print). The book was adapted for the web by Elizabeth J. Hermsen and Jonathan R. Hendricks in 2022. Changes include formatting and revisions to the text and images. Credits for individual images are given in figure captions.

The Northeast, and especially Pennsylvania in the Inland Basin region, is an important source of fossil fuels, particularly coal and natural gas. Electricity generation in the Northeast varies by state, although most states rely on natural gas for a large portion of their electricity generation, with the exception of Vermont. Nuclear is an import power source for some states, including Connecticut, Maryland, New Hampshire, New Jersey, New York, and Pennsylvania. Remaining power comes from a variety of sources, most significantly hydroeletricity (especially Maine, New York, and Vermont) and biomass (especially Maine and Vermont). Other notable sources of electric power include wind, coal, and solar, although wind and solar are not as important as in some other regions of the U.S. 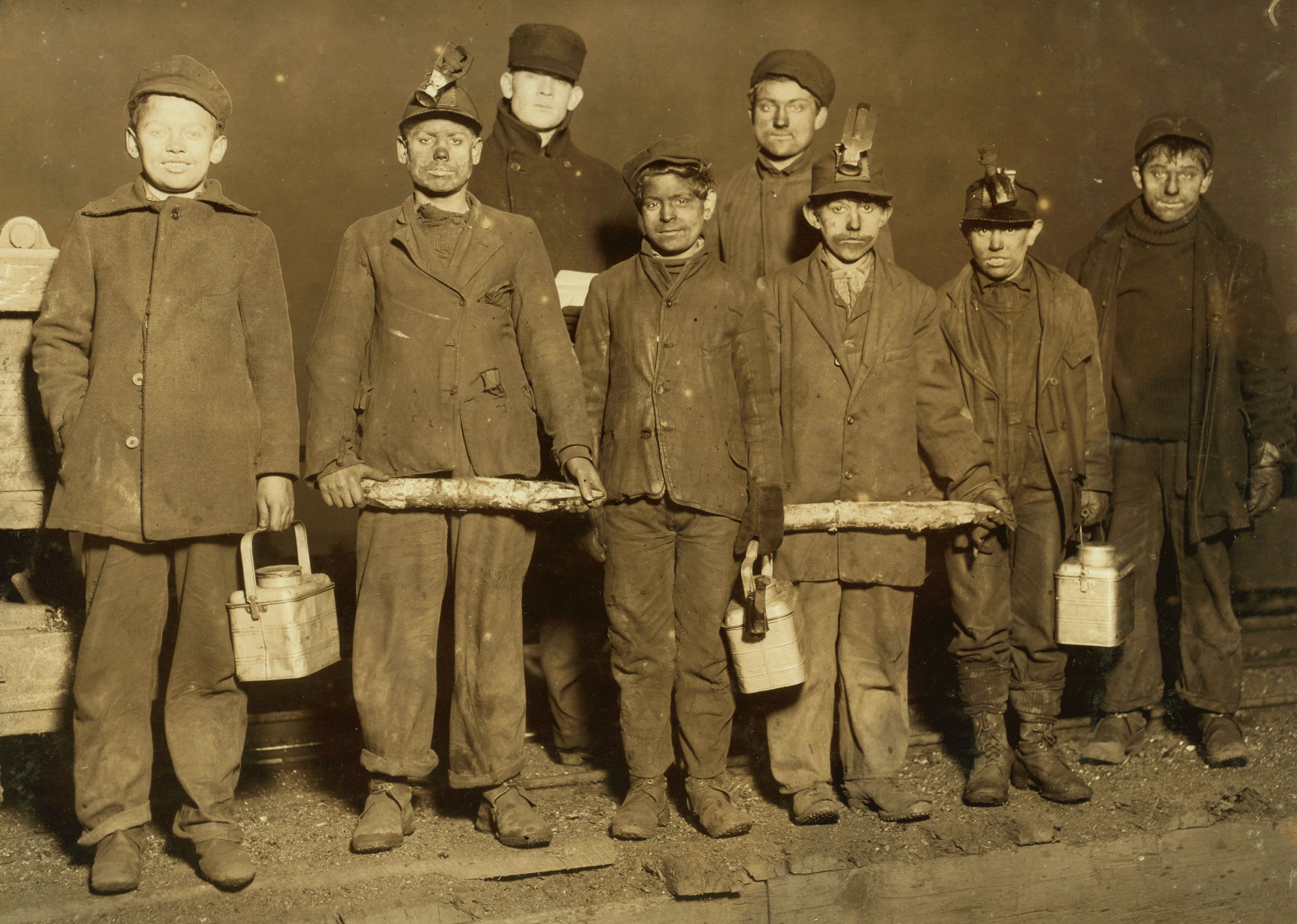 The oil industry got its start in the Northeast. In 1859, Colonel Edwin Drake drilled the world’s first commercial oil well in Titusville, Pennsylvania. Although the amount of oil produced in Pennsylvania is small, it is high grade and thus relatively valuable. There are several oil fields in southwestern New York, but very little oil is produced there. 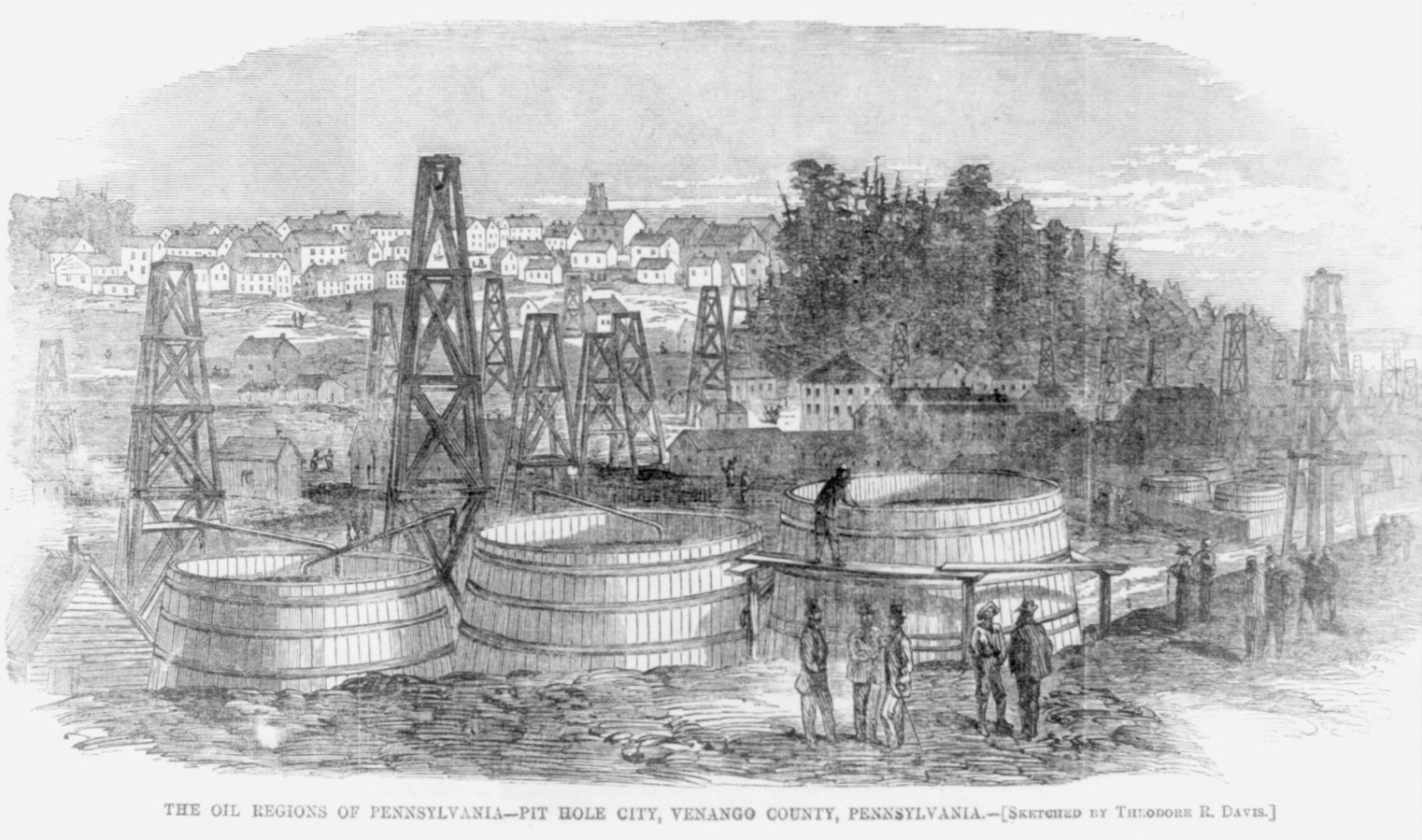 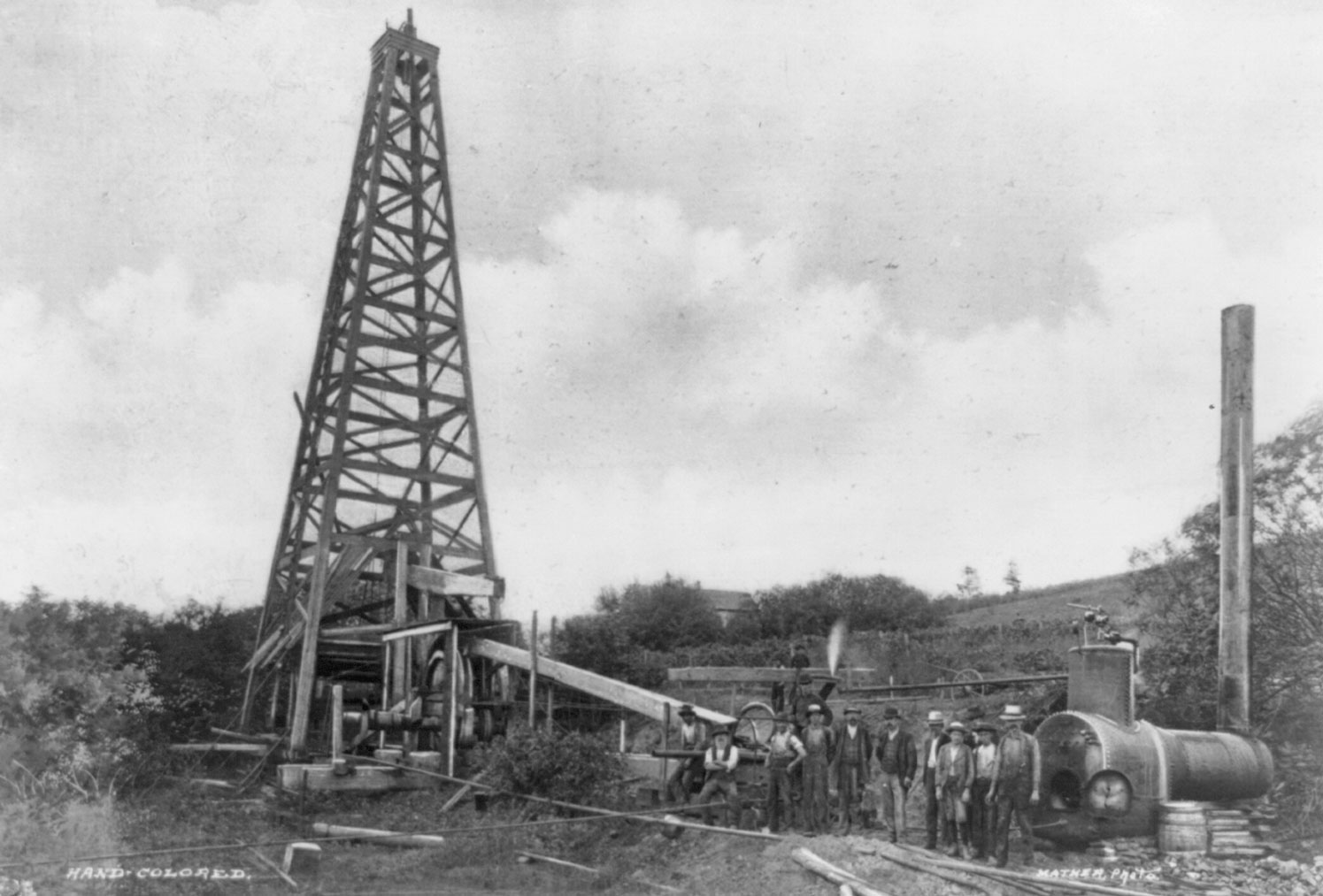 The Devonian Oriskany Sandstone, a well-sorted sandstone that has excellent permeability and that is overlain by an impermeable layer, is a reservoir rock in which oil and gas pooled. The gentle folds of the oil-producing region of the Northeast, formed during the Paleozoic mountain-building events, are excellent traps for oil and gas. In some places, Silurian salt has pushed upward through overlying Devonian rocks, warping and folding them and also forming traps for migrating oil and gas. 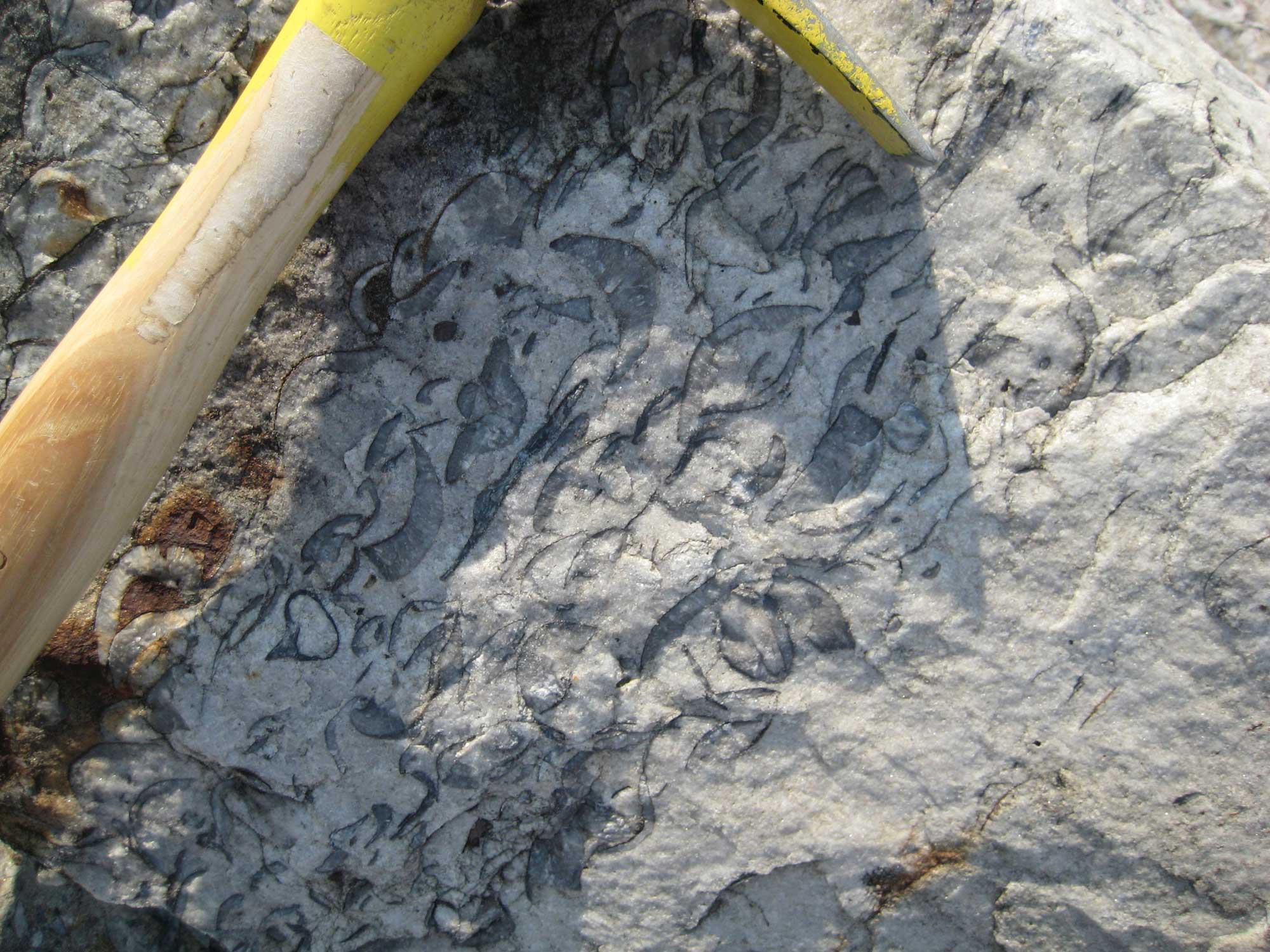 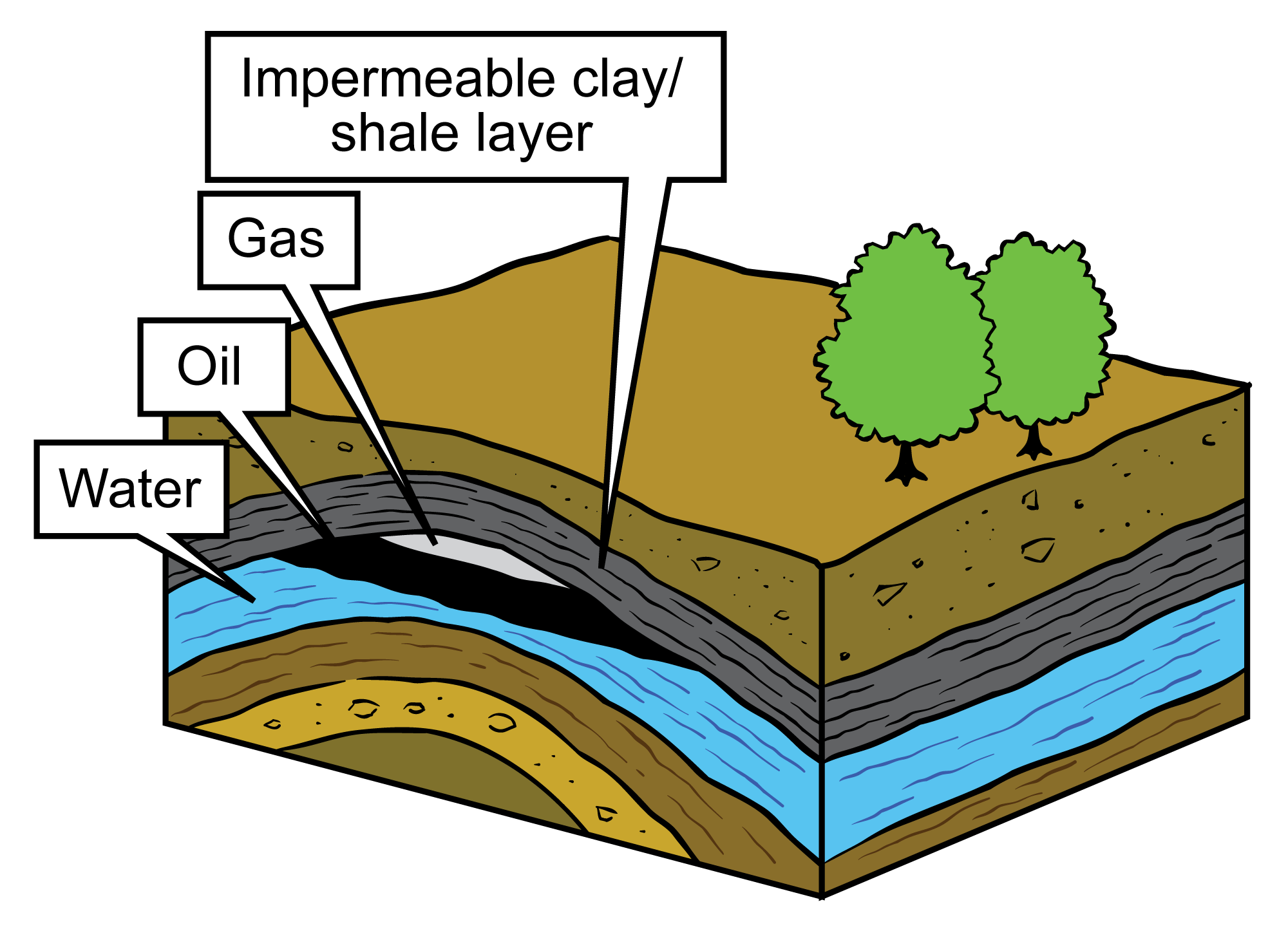 Diagram of an oil and gas reservoir. In this image, natural gas and fluids (water and oil) have accumulated in a layer of permeable reservoir rock, where they are separated by density (gas is lightest, water densest). An impermeable clay or shale layer that has been folded serves as a barrier to further movement of fluids and gas upward toward the surface. Image modified from original by Jim Houghton, published in The Teacher-Friendly Guide to the Geology of the Southeastern U.S., 2nd ed. (CC BY-NC-SA 4.0 license). 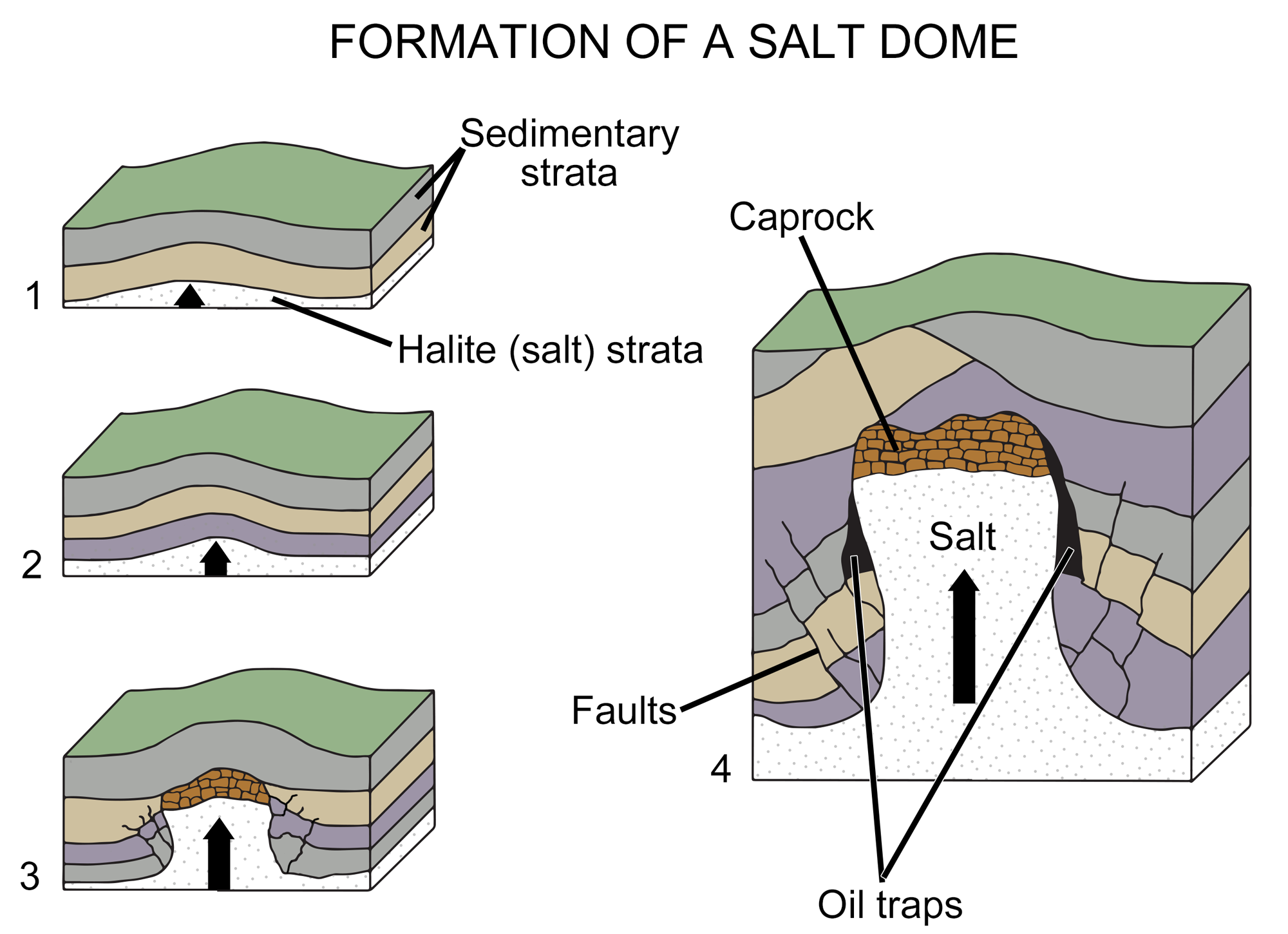 Diagram of the formation of a salt dome. In images1 to 3, a salt layer deforms, pushing upward through the rock layers above it until it is impeded by a caprock (a hard or dense rock layer). In image 4, the deformation of overlying layers by the salt has formed gaps where oil or gas has accumulated. Image modified from original by Wade Greenberg-Brand (after an image by Britannica online for kids), published in The Teacher-Friendly Guide to the Geology of the Southeastern U.S., 2nd ed. (CC BY-NC-SA 4.0 license).

The natural gas industry in the United States also got its start in the Inland Basin region of the Northeast. William Hart drilled the first natural gas well in 1821 in Fredonia, New York. The potential of natural gas as a fossil fuel was not recognized, however, until the early 1900s. In the past, natural gas was released into the air from coal mines and oil wells. Today, natural gas is targeted as a fuel.

Large amounts of gas have been produced from thick Devonian-aged black shales in the Northeast. These shales were deposited in oxygen-poor inland seas where organic material was preserved at the sea bed. With time, pressure, and heat, organic material in the shale was changed into petroleum and gas. Devonian-aged shales are the major source rock for most of the Inland Basin’s younger petroleum reservoirs, and they are also a major gas reservoir. Because the shales are not permeable, gas production occurs where the rocks are naturally fractured, or where it is induced by hydraulic fracturing.

The middle Devonian Marcellus shale, which underlies much of Pennsylvania, a small area of western Maryland, and southern New York, is the most famous northeastern unit that has been fracked. In the Northeast, fracking is especially concentrated in Pennsylvania; it has been banned in New York. 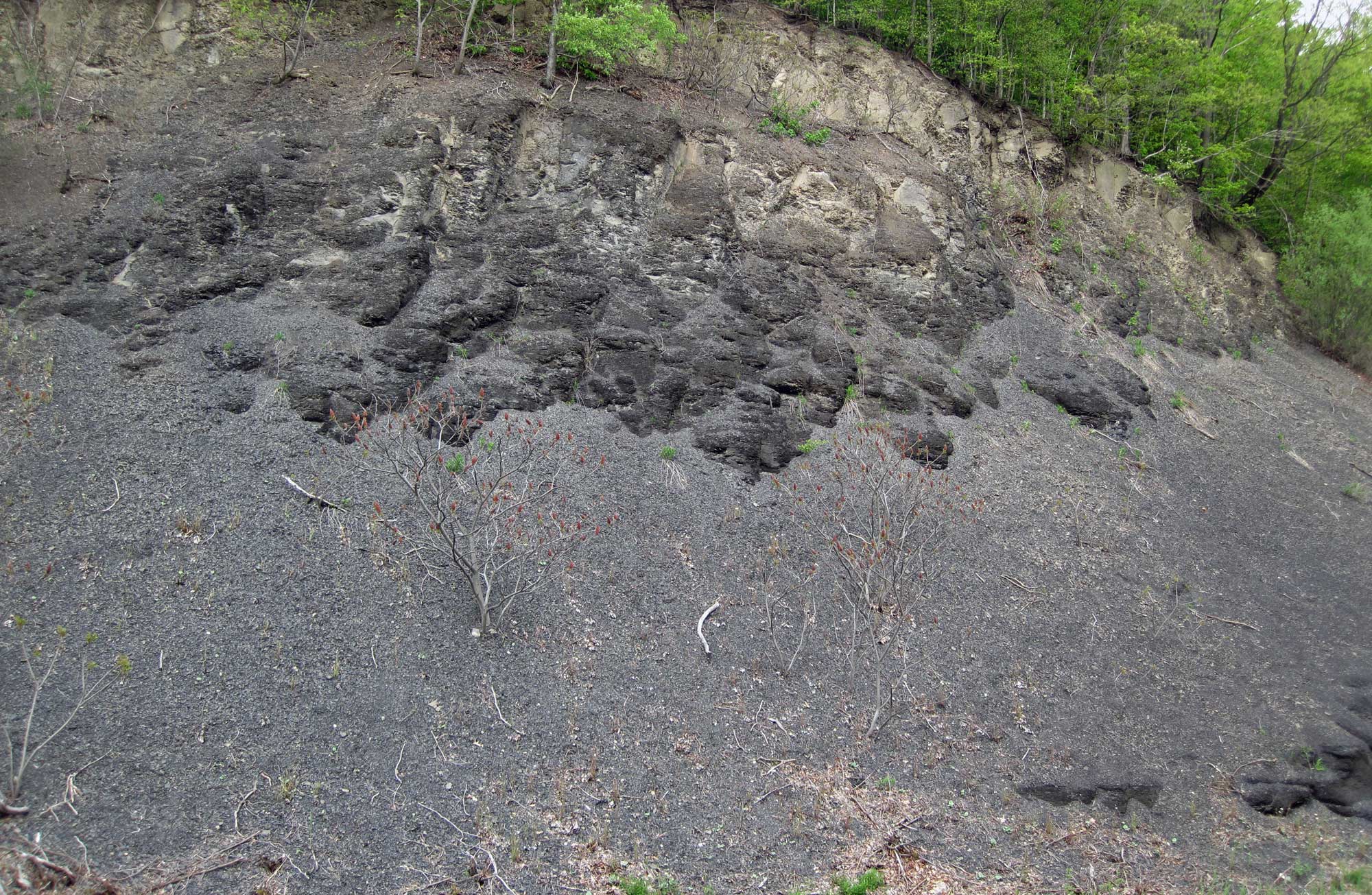 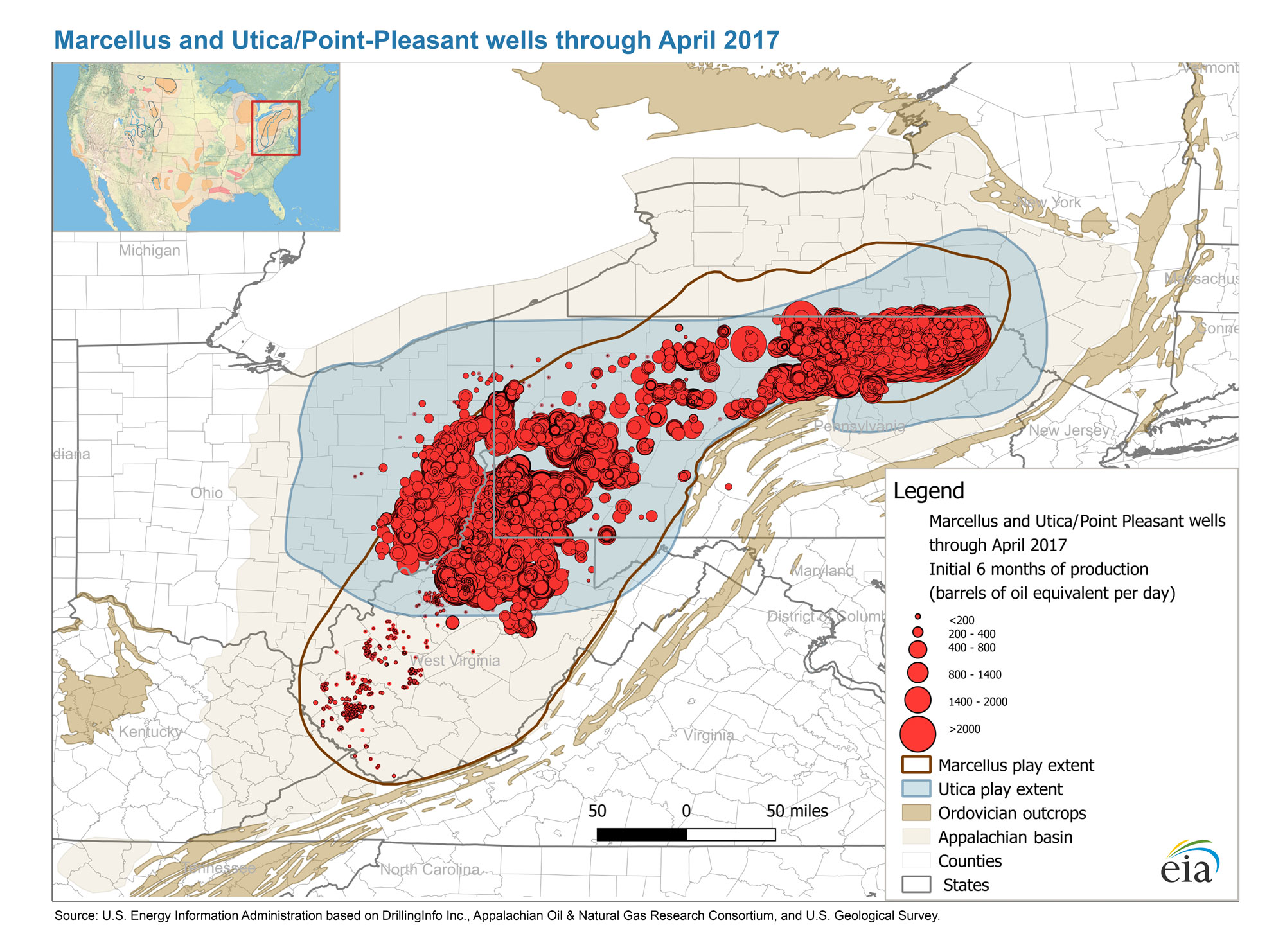 Petroleum production in the Devonian Marcellus and Utica/Point Pleasant shales as of April 2017. Map from the US Energy Information Administration. 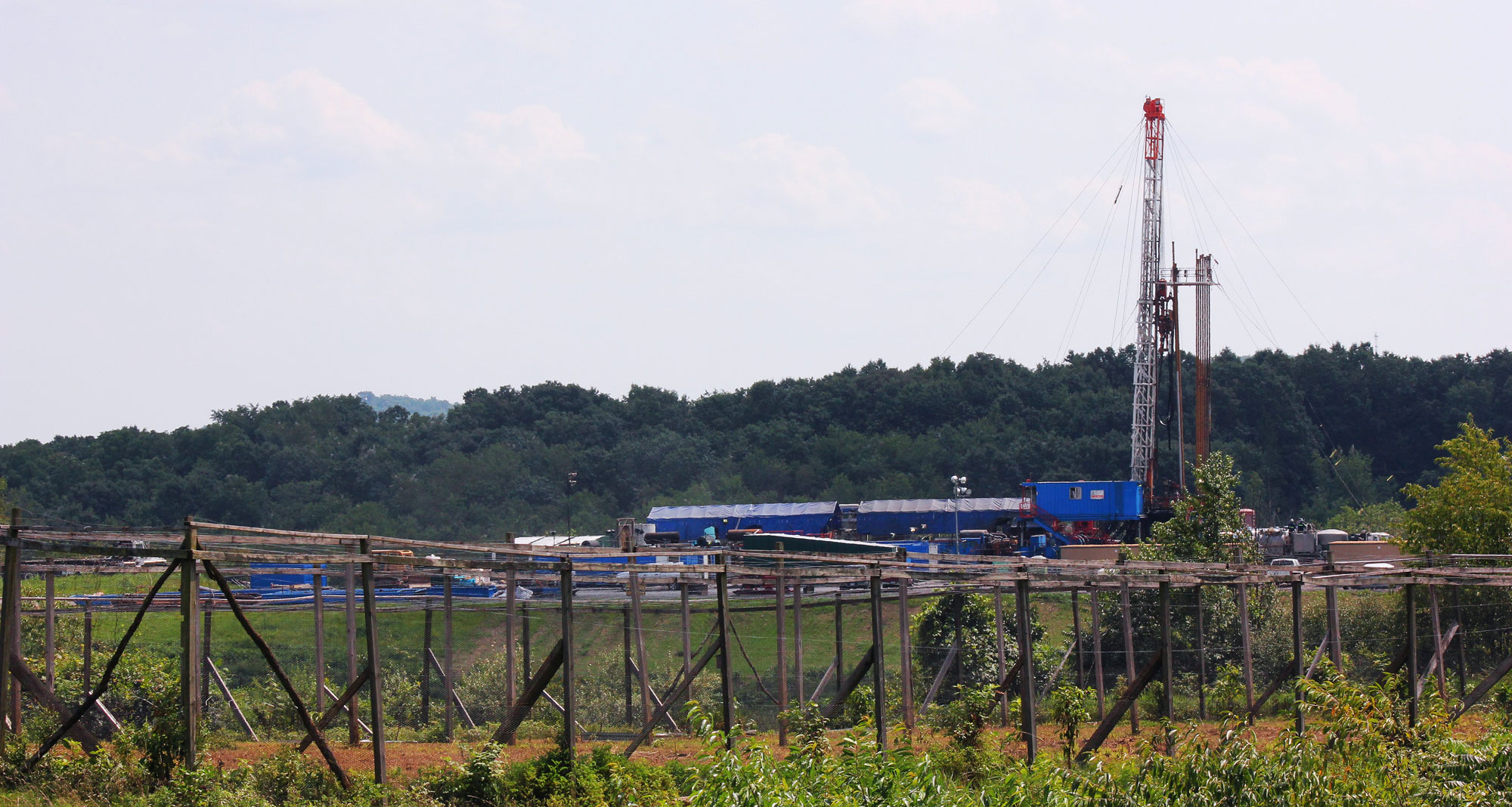 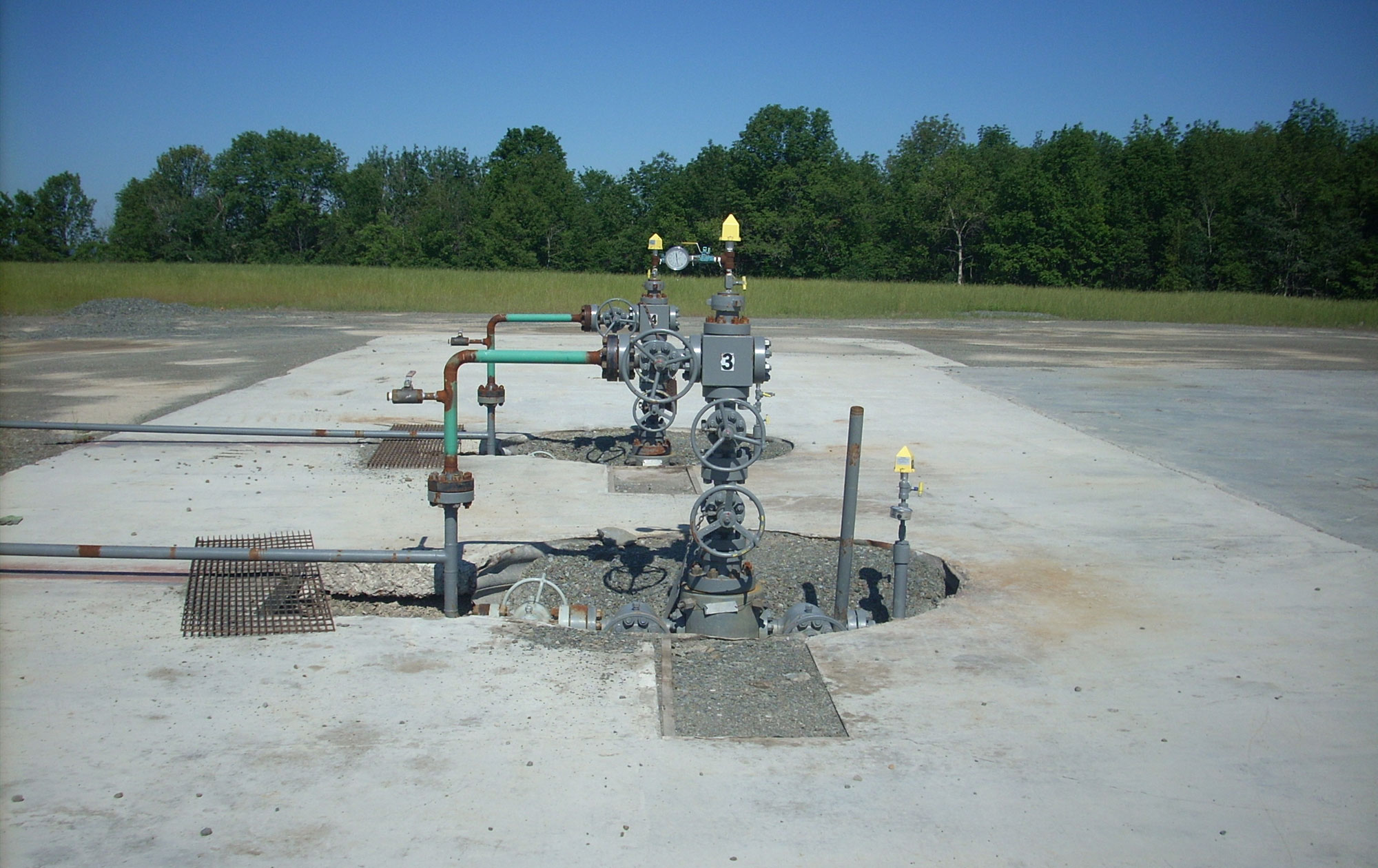 Erosion of sediment from the Appalachian Mountains, which were formed by the assembly of Pangaea in the late Paleozoic, created vast coastlines and deltas in the Inland Basin. Widespread deposits of coal are associated with these areas. The main period of coal formation is known as the Carboniferous because of the abundant carbon (coal) found in rocks of this age. In the United States, the interval of time represented by the Carboniferous is divided into the Mississippian (major limestone and minor coal deposits) and Pennsylvanian (major coal deposits) periods.

Coal is plentiful in the Inland Basin thanks to local environmental conditions during the Mississippian and Pennsylvanian. Tropical climate, fluctuating sea levels, and basin subsidence (sinking) resulted in the cyclic growth and burial of vast peat swamps, some of which may have been among the largest tropical peat swamps of all time. The sea advanced and retreated hundreds of times, shifting the shoreline back and forth across the region and leaving hundreds of coal beds preserved when and where conditions were right for burial of peat. Time, deep burial, and metamorphism transformed the peat layers into high grade anthracite and bituminous coal beds.

While the Northeast is still an important coal-producing region, coal provides relatively little of the electricity in the region today. Only Delaware, Maryland, and Pennsylvania use coal for more than 5% of their electricity generation. 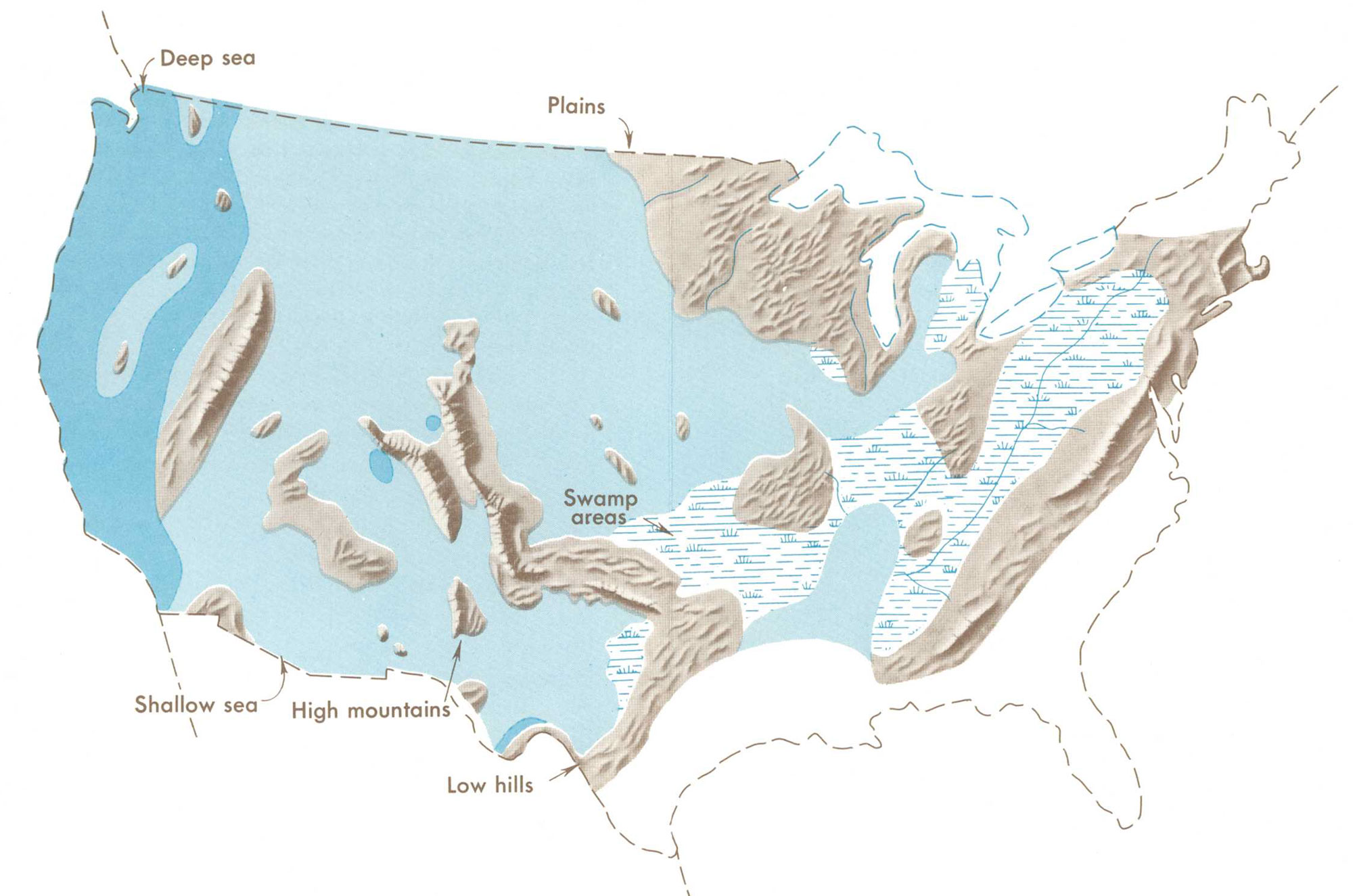 Distribution of Pennsylvanian swamps and highland areas relative to the outline of the modern United States. Map from Our changing continent, USGS Monograph, published 1969.

Western Pennsylvania and Maryland have layers of bituminous coal. This coal is the northernmost extent of a long expanse of coal that stretches down the Allegheny Plateau the length of the Appalachians. Because This region was not severely deformed and compressed, the coals of western Maryland and Pennsylvania are bituminous, unlike the anthracite coal found further east in the intensely folded Appalachian/Piedmont region.

Coal mining in the region began about 1760, shortly before it began in the anthracite coal mining region further east. The first coal mine was at Mt. Washington (Coal Hill) on the south shore of the Monongahela River, now part of Pittsburgh. The coal was originally mined for use at Fort Pitt. During the 1800's, coal from the Pittsburgh area was used in the salt, glass-making, and iron- and steel-making industries.

Coal continues to be an important industry in Pennsylvania. Most bituminous coal in the region is mined underground using a process called longwall mining. In longwall mining, a machine (a plow or shear) cuts coal continuously over the length of a coal seam, and mined coal is moved away from the coal face by a conveyer. One concern with this type of mining is land subsidence, or sinking, which can affect structures and waterways above the mine. The reason subsidence can occur is because the ceiling of the mine is allowed to fall in after the coal is mined. 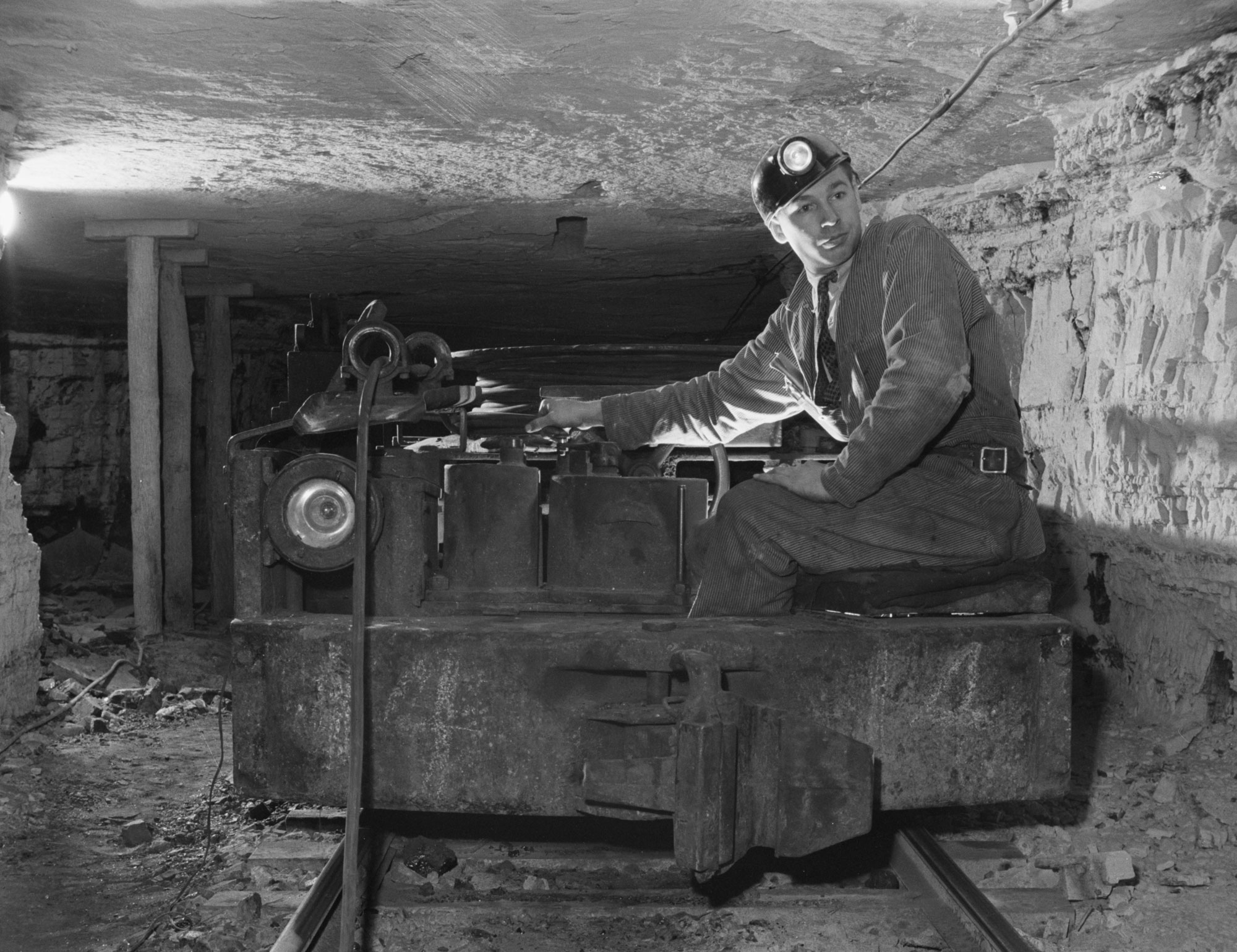 The anthracite coal mining region of Pennsylvania is centered in six counties: Carbon, Columbia, Lackawanna, Luzerne, Northumberland, and Schuylkill. The Acadian and Alleghanian orogenies deformed and metamorphosed the rocks in this region, squeezing the rock layers up into tight folds and compressing the coal beds. As the coal was compressed during these mountain-building events, impurities in the coal were released as gases, leaving high-carbon anthracite behind. Anthracite is 95% carbon and much harder than bituminous coal. Although it is more difficult to ignite, the higher percentage of carbon in anthracite makes it a very clean-burning fuel.

Anthracite mining in this region began in Pittston, Pennsylvania, in the 1770s. The anthracite coal industry in northeastern Pennsylvania flourished well into the 20th century, although underground anthracite mining was dangerous and used child labor, which was becoming controversial by the late 1800s. 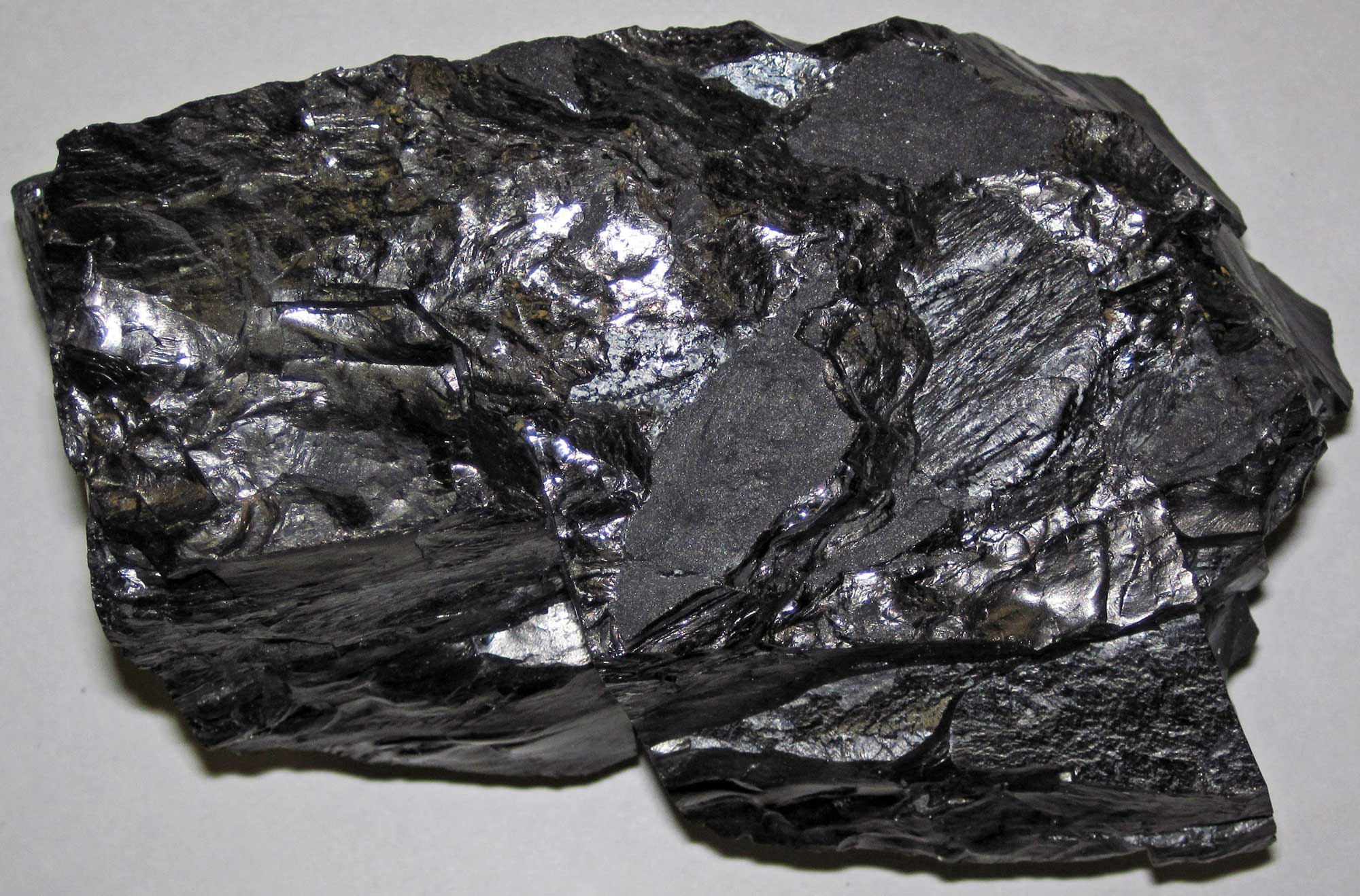 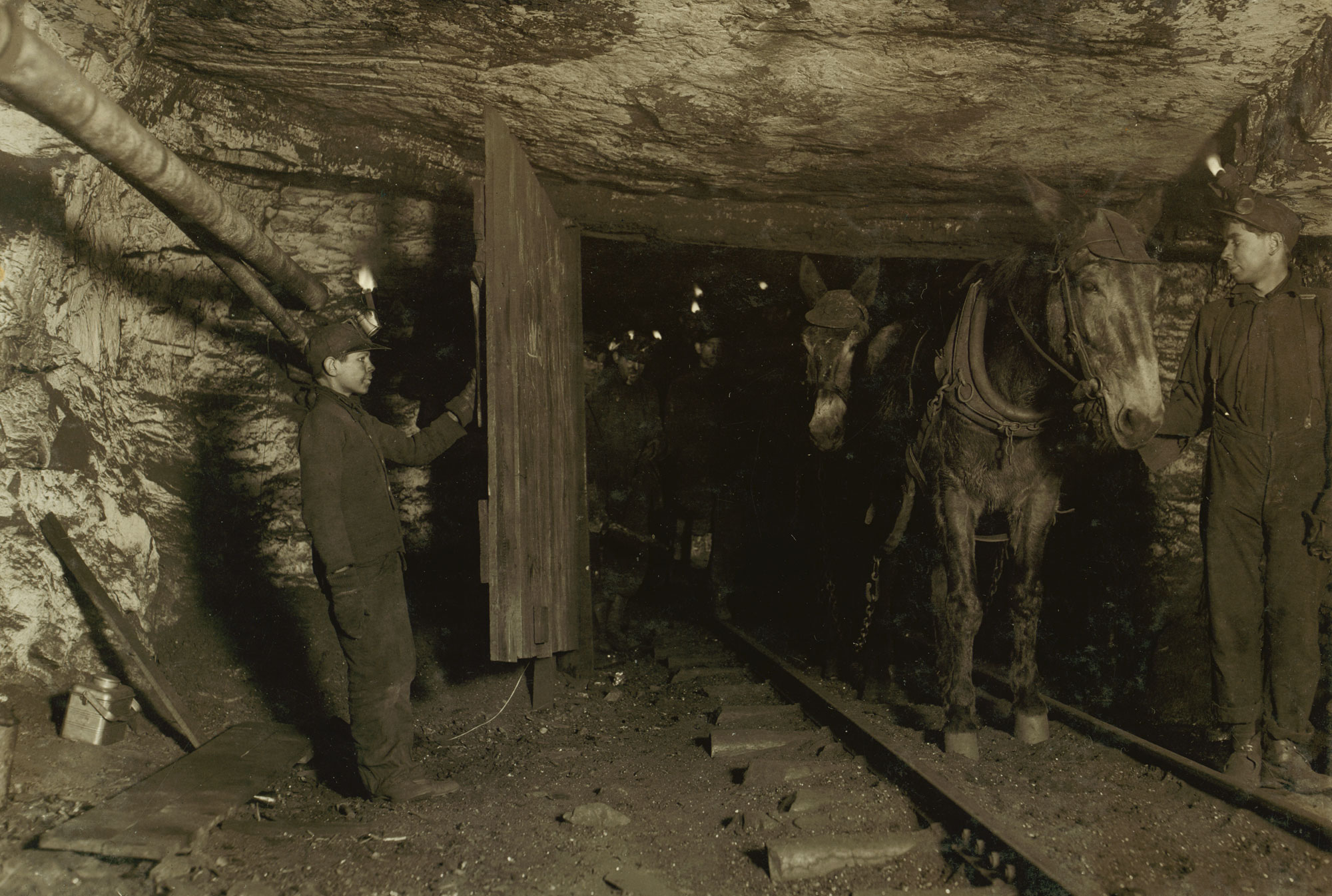 Shaft #6, Pennsylvania Coal Company, Pittston, Pennsylvania, 1911. The boy holding the door is Willie Bryden, 13 years old, a nipper (a boy who waited to open the door for others). The mine walls were painted white to brighten the shaft. Photo by Lewis Wickes Hines (Library of Congress reproduction number LC-DIG-nclc-01111, National Child Labor Committee, no known restrictions). 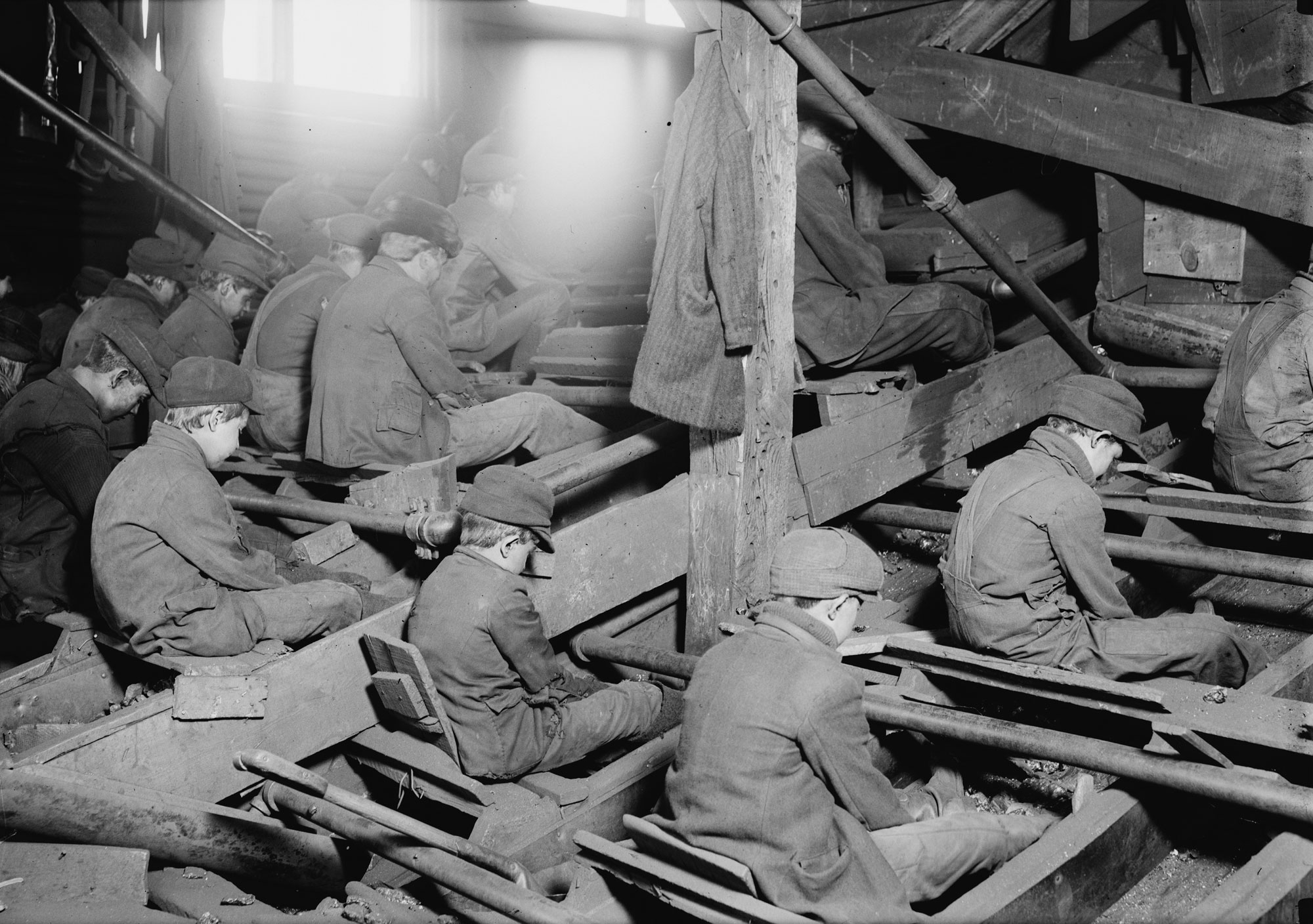 Breaker boys working in South Pittston, Pennsylvania, 1911. Breaker boys removed impurities from coal and sorted coal. As a result of their work, they could experience respiratory problems caused by inhaling coal dust, along with other types of injuries or death. Photo by Lewis Wickes Hines (Library of Congress reproduction number LC-DIG-nclc-05473, National Child Labor Committee, no known restrictions).

Perhaps one of the most famous towns in the anthracite coal mining region is Centralia, Pennsylvania. Centralia is a town with a coal mining history going back to the mid-1800s. It has become famous, however, for an underground coal seam fire that began in 1962 and that has burned ever since. It is believed that the coal seam was ignited by a fire started to burn trash in a former stripmine. Because of the dangerous conditions (toxic gases, unstable ground) caused by the underground fire, the town of Centralia (1962 population of about 1100) has been abandoned and people are warned to avoid the area. 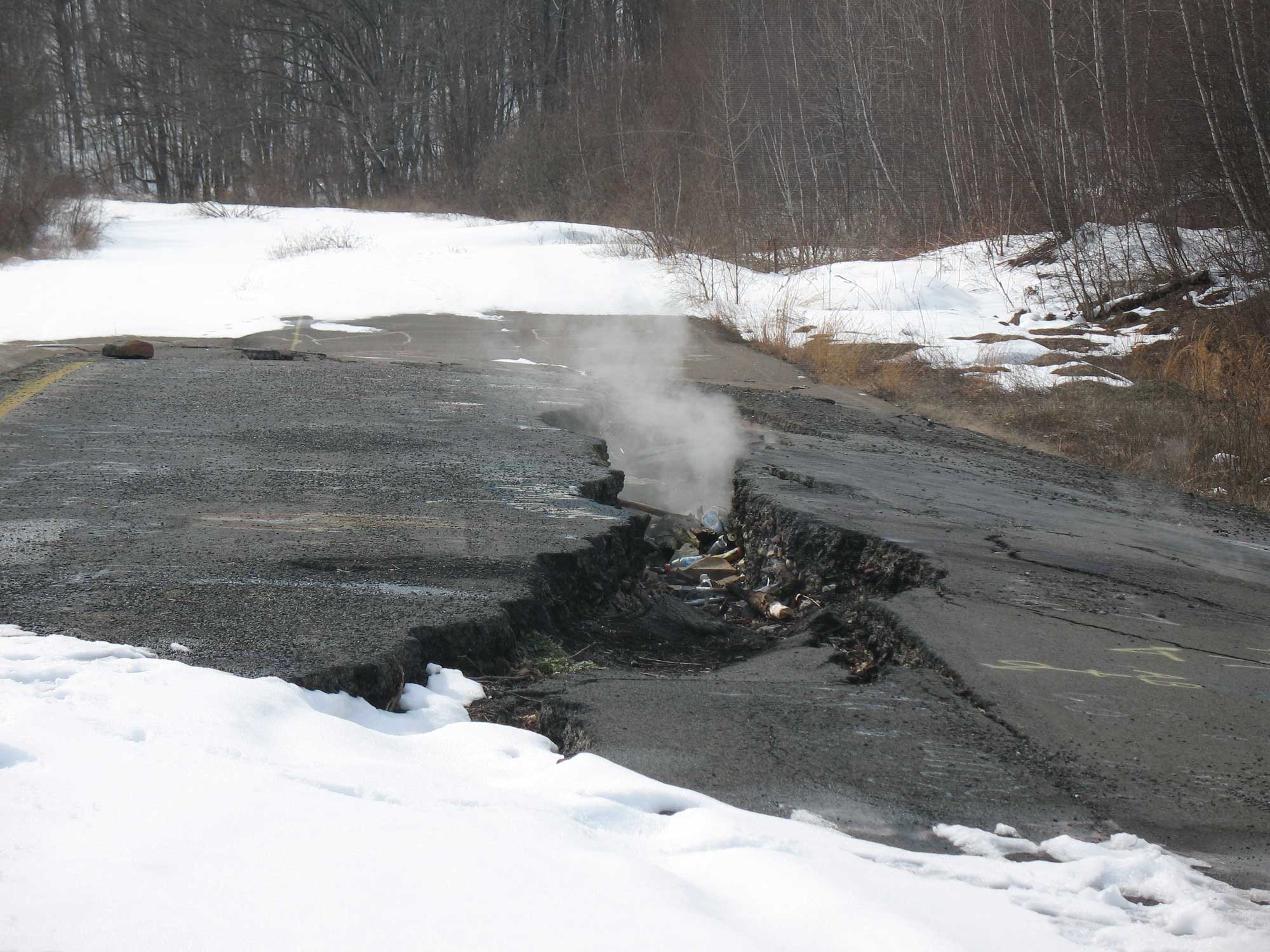 Despite its clean-burning properties, the mining of anthracite has suffered a serious decline due to the expense and difficulty of extraction. Because the anthracite layers are in severely deformed rock and high relief topography, it is difficult and dangerous to follow and mine along a continuous layer. Most active anthracite mines are now surface mines (strip mines). 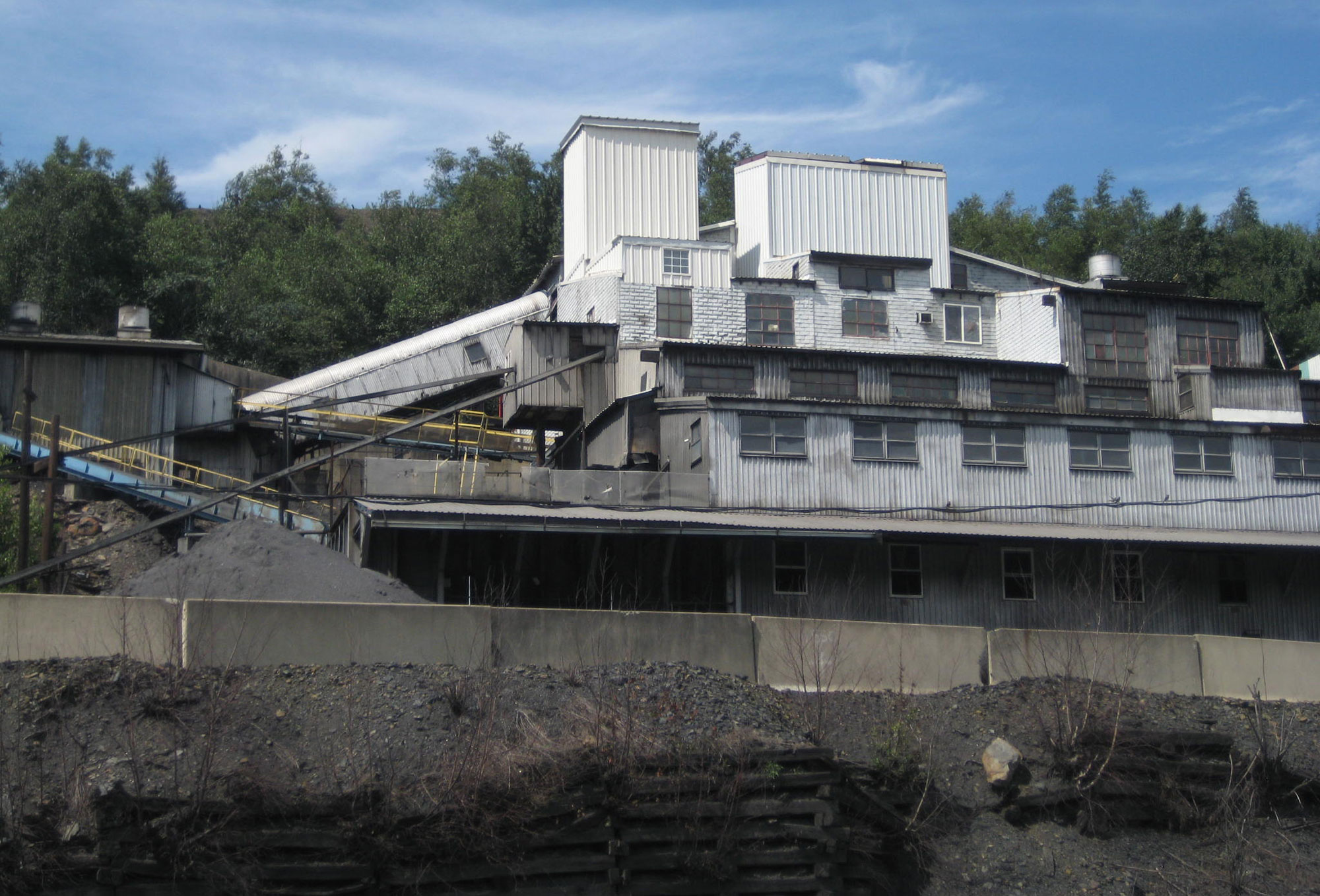 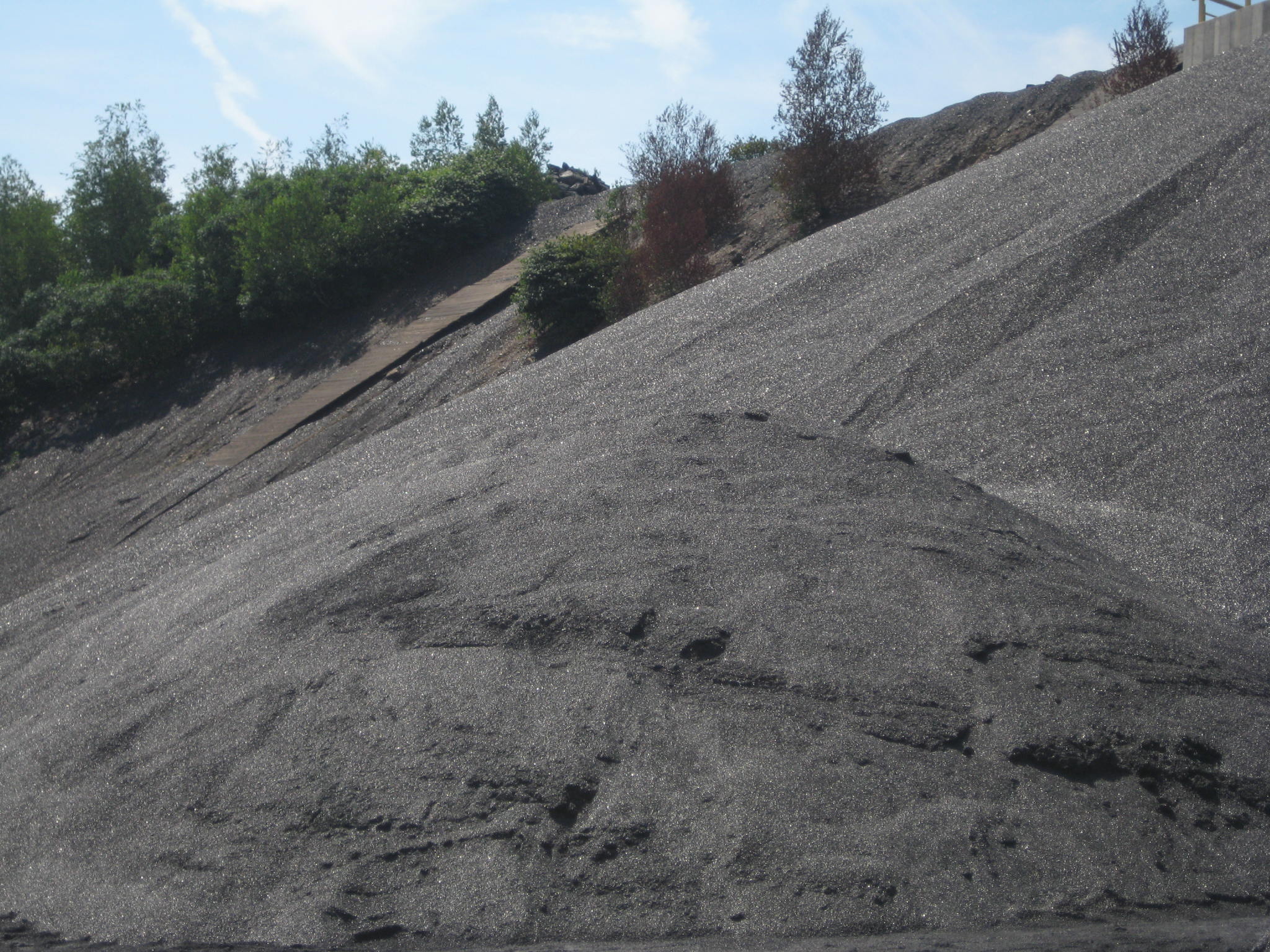 Coal is found in the Narragansett Basin of Rhode Island and Massachusetts. The coal was formed during the Pennsylvanian when the collision of North America and Baltica compressed the Avalonia microcontinent caught in the middle. The collision buckled the crust to form small basins that gradually filled in with sediment. Accumulations of dead plant material in the swampy basins provided the proper conditions for minor amounts of anthracite and meta-anthracite coal to form, although there are not large enough amounts to make mining profitable today. In the past, however, coal mines operated in this region. 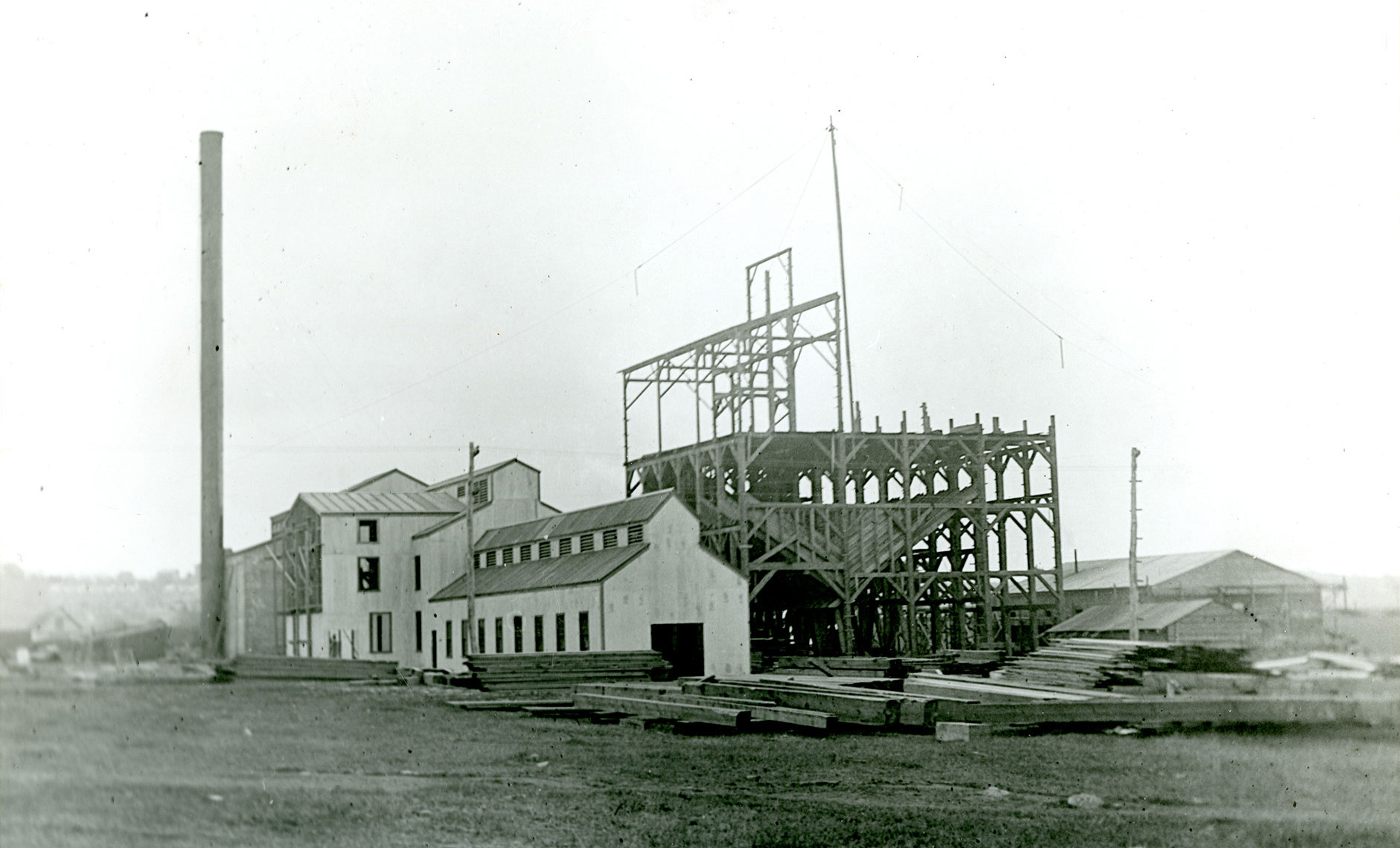 Hydroelectricity is part of the mix of energy generation in the Northeast. New York produces by far the most power from hydroelectricity. The largest hydroelectric facility in New York and the region is the Niagara Power Project (Robert Moses Niagara Power Plant and the Lewiston Pump Generating Plant) on the Niagara River in northern New York, downstream from Niagara Falls; it began operating in 1961. This Niagara Power Project has a capacity of more than 2500 MW. Hydropower is the source of more than 20% of New York's power. 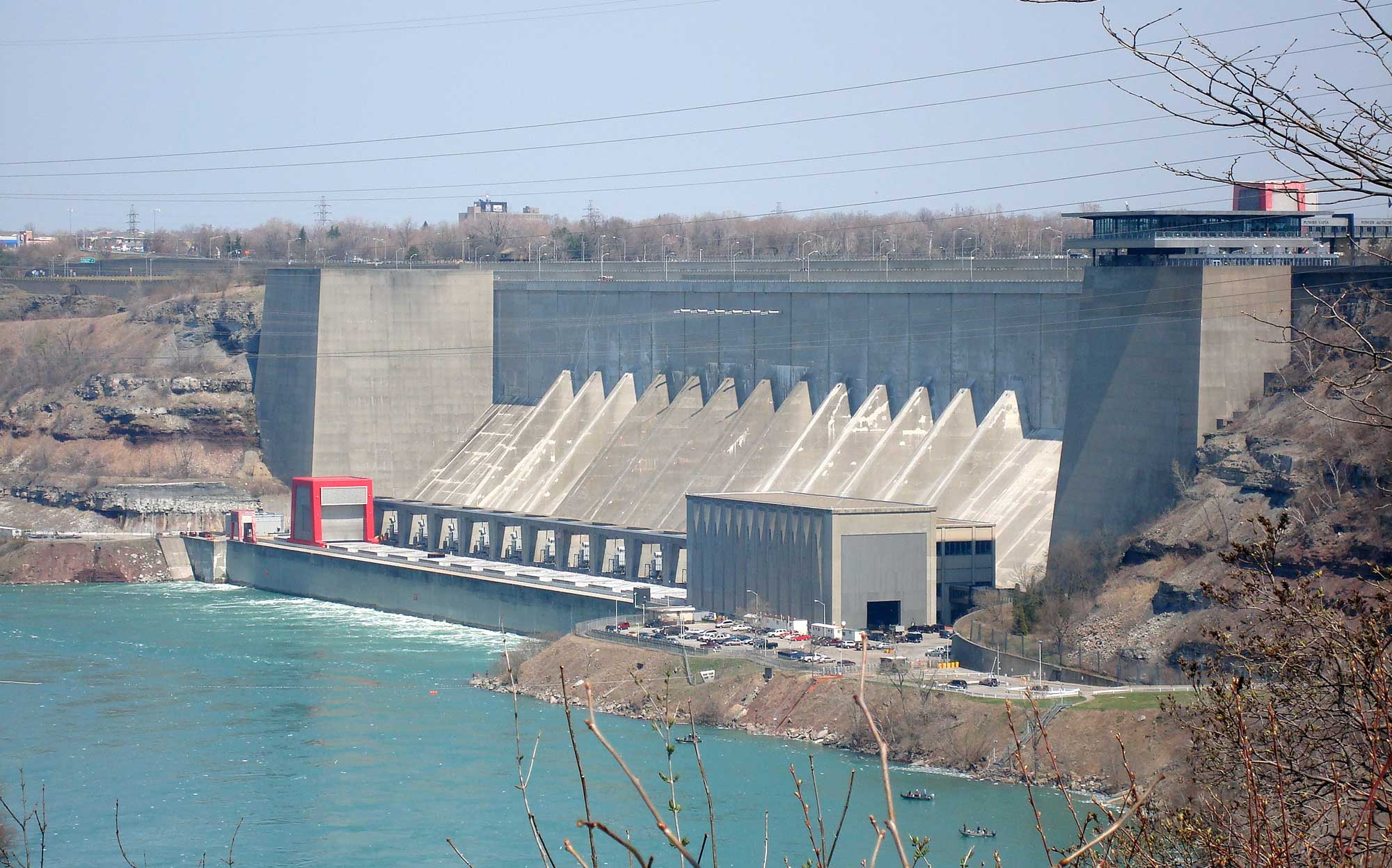 Maine is the only state in the Northeast that relies heavily on wind energy, which is used to generate more than 20% of electricity in the state. 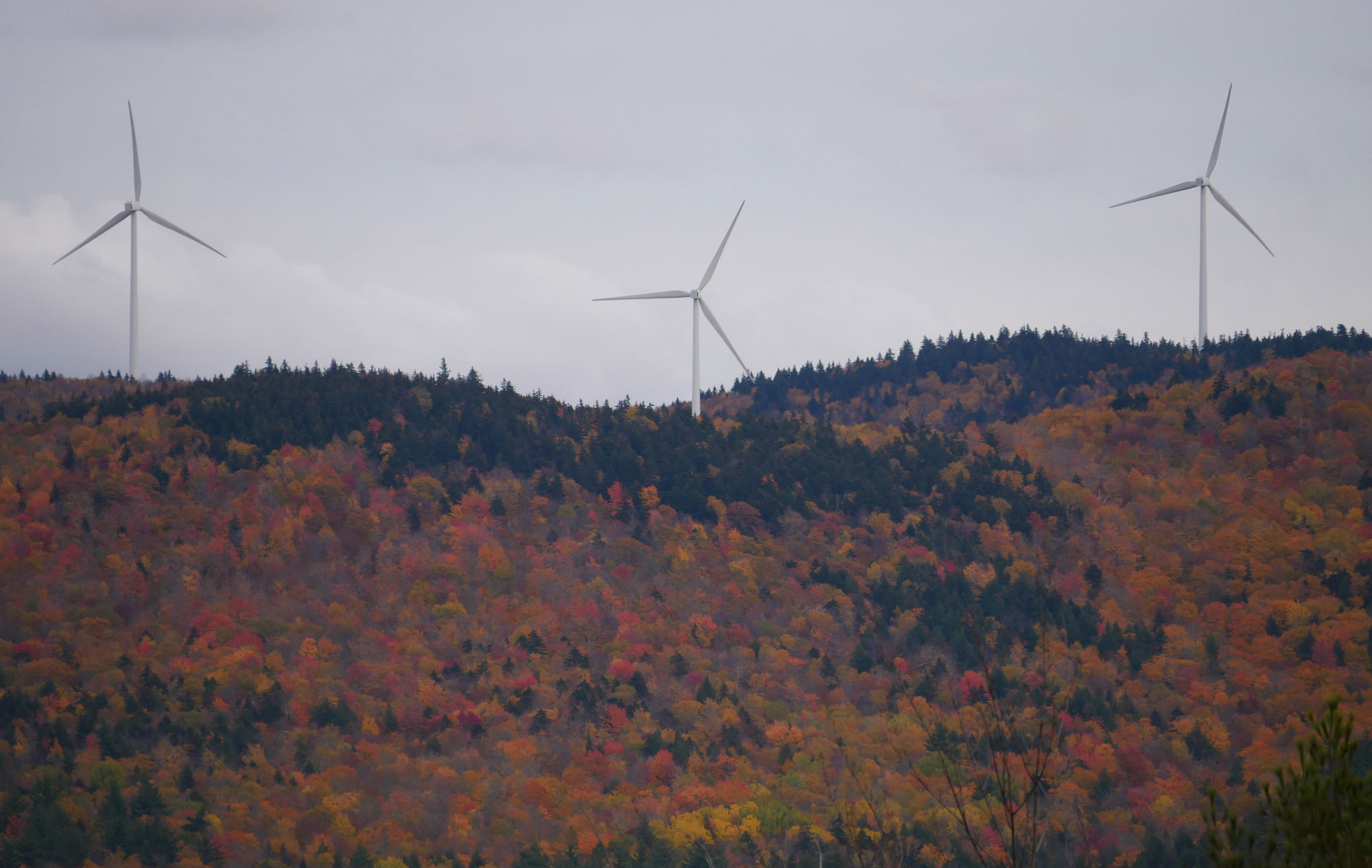 Biomass is an important power source in parts of the Northeast, most importantly Maine and Vermont. Maine generates nearly 20% of its power from biomass, whereas Vermont generates about 25%. Some biomass in this region comes from wood chips.

One of the world's first nuclear electricity generating stations built for civilian use, Shippingport Atomic Power Station, once existed northwest of Pittsburgh in western Pennsylvania. It operated from the 1950s to the 1980s. Currently, five states in the Northeast have operating nuclear power plants. Pennsylvania has the most, with four, three in eastern Pennsylvania and one in western Pennsylvania. New York has two on Lake Ontario. Connecticut, Maryland, New Hampshire, and New Jersey each have one. 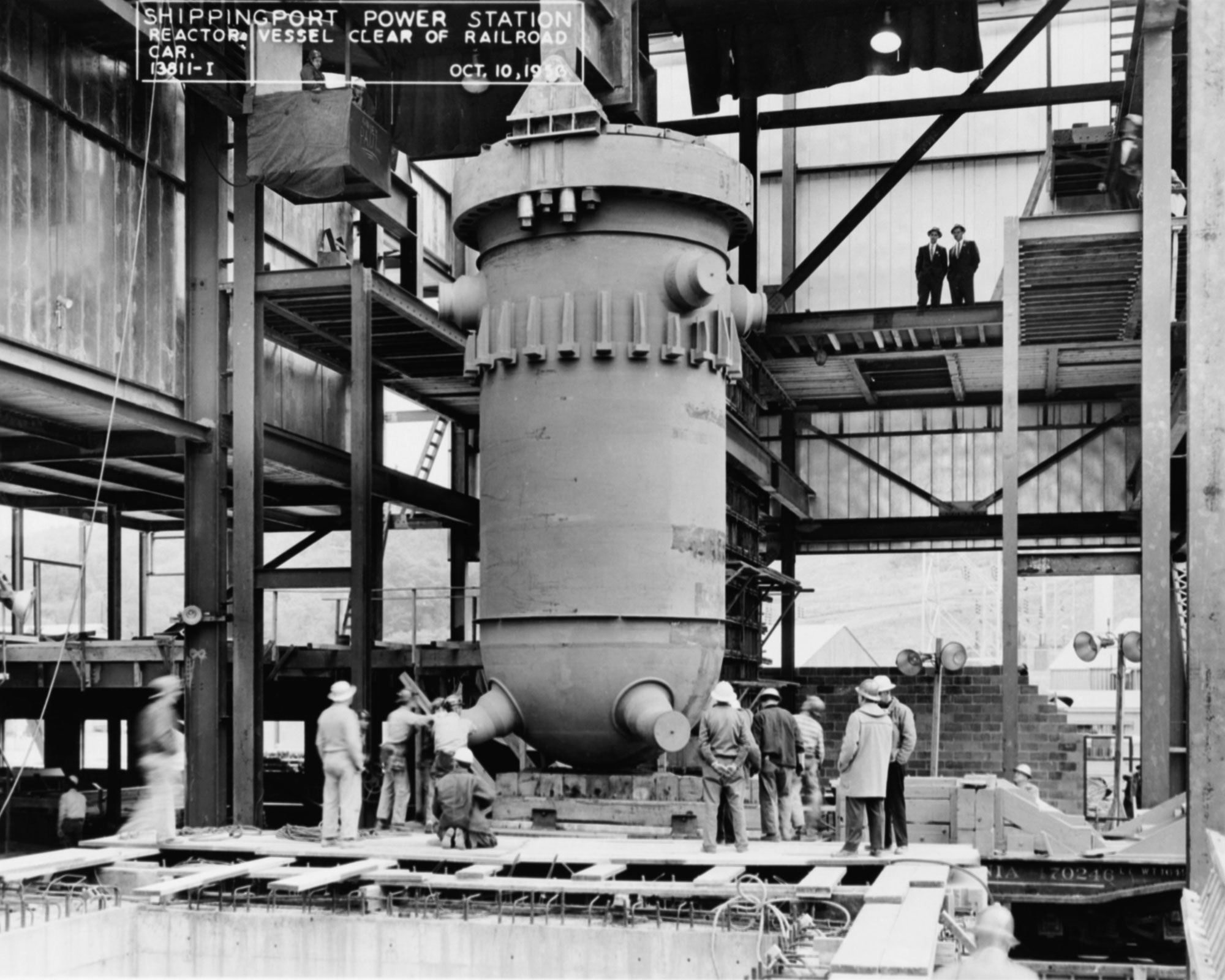 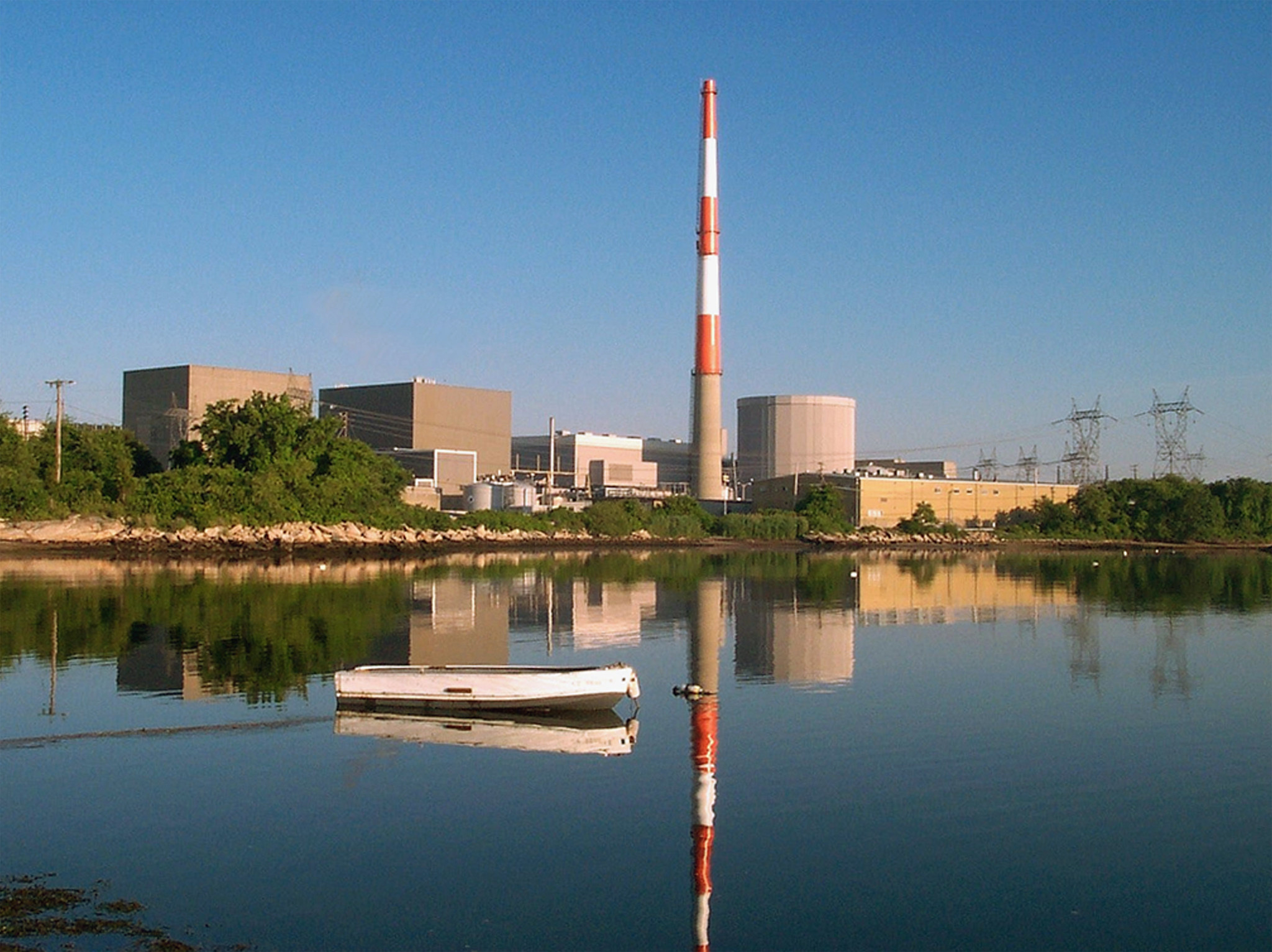 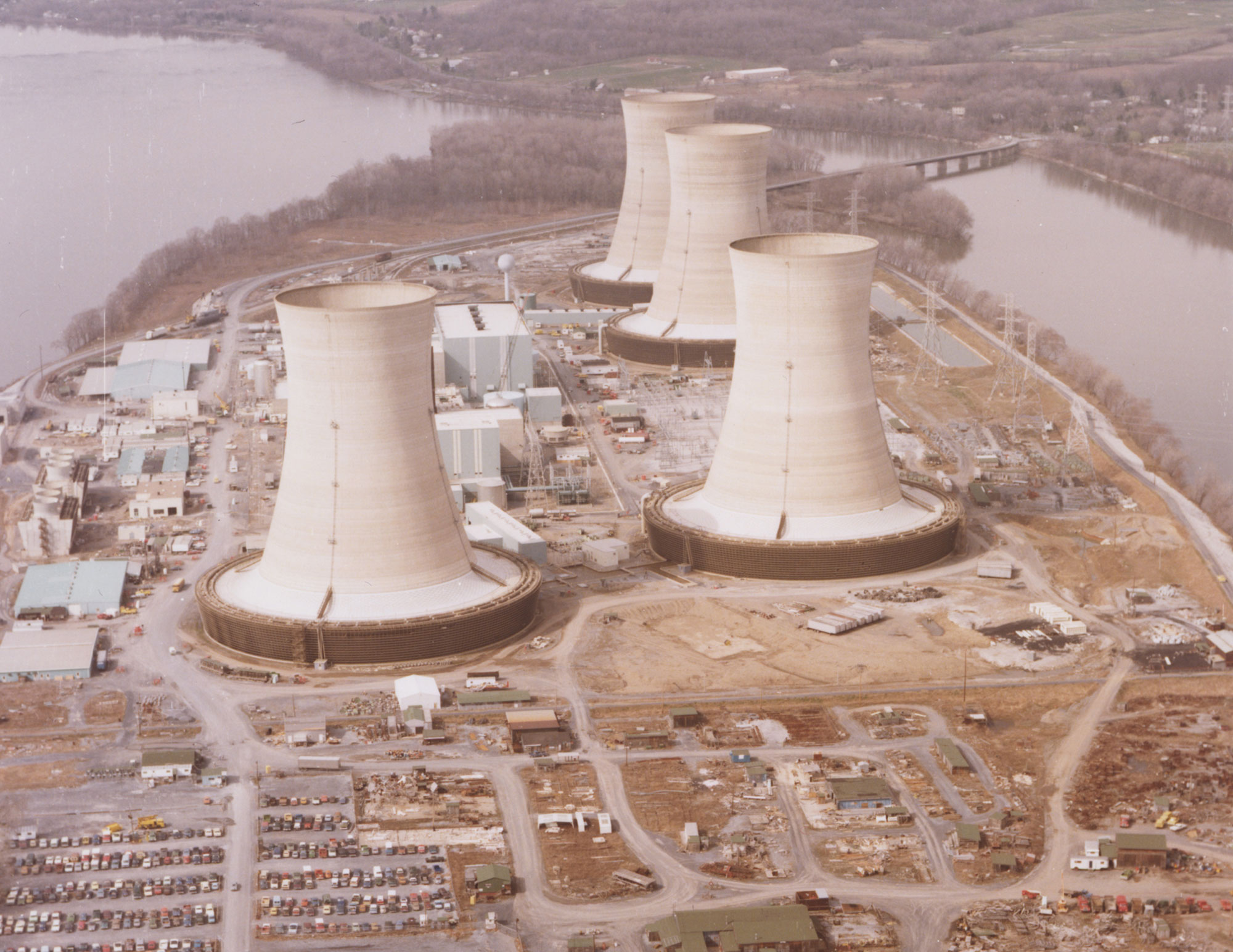 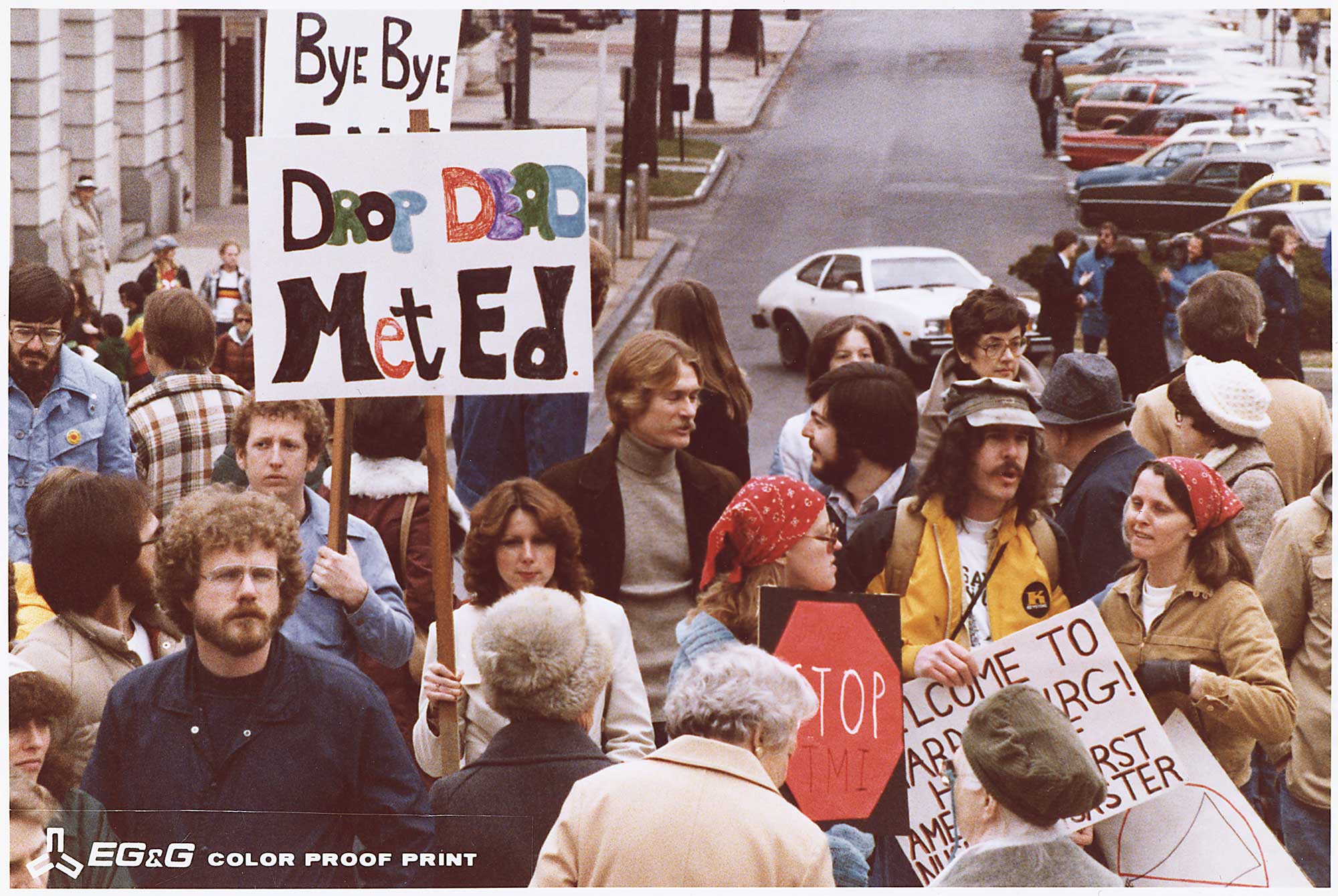