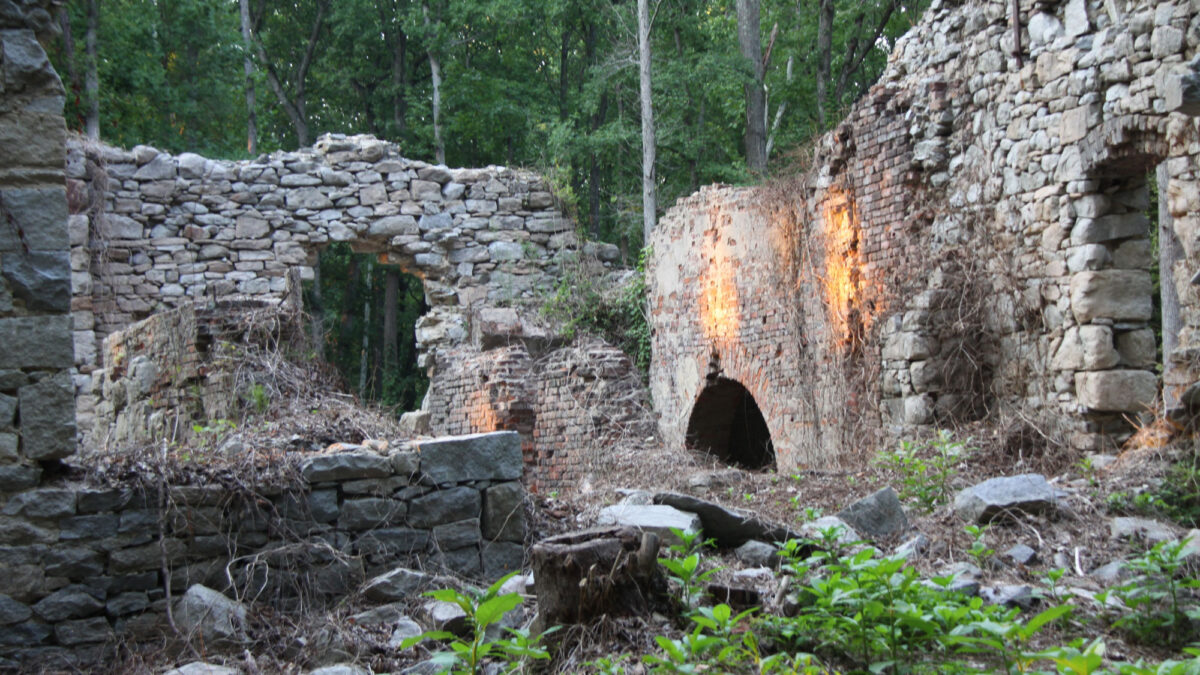 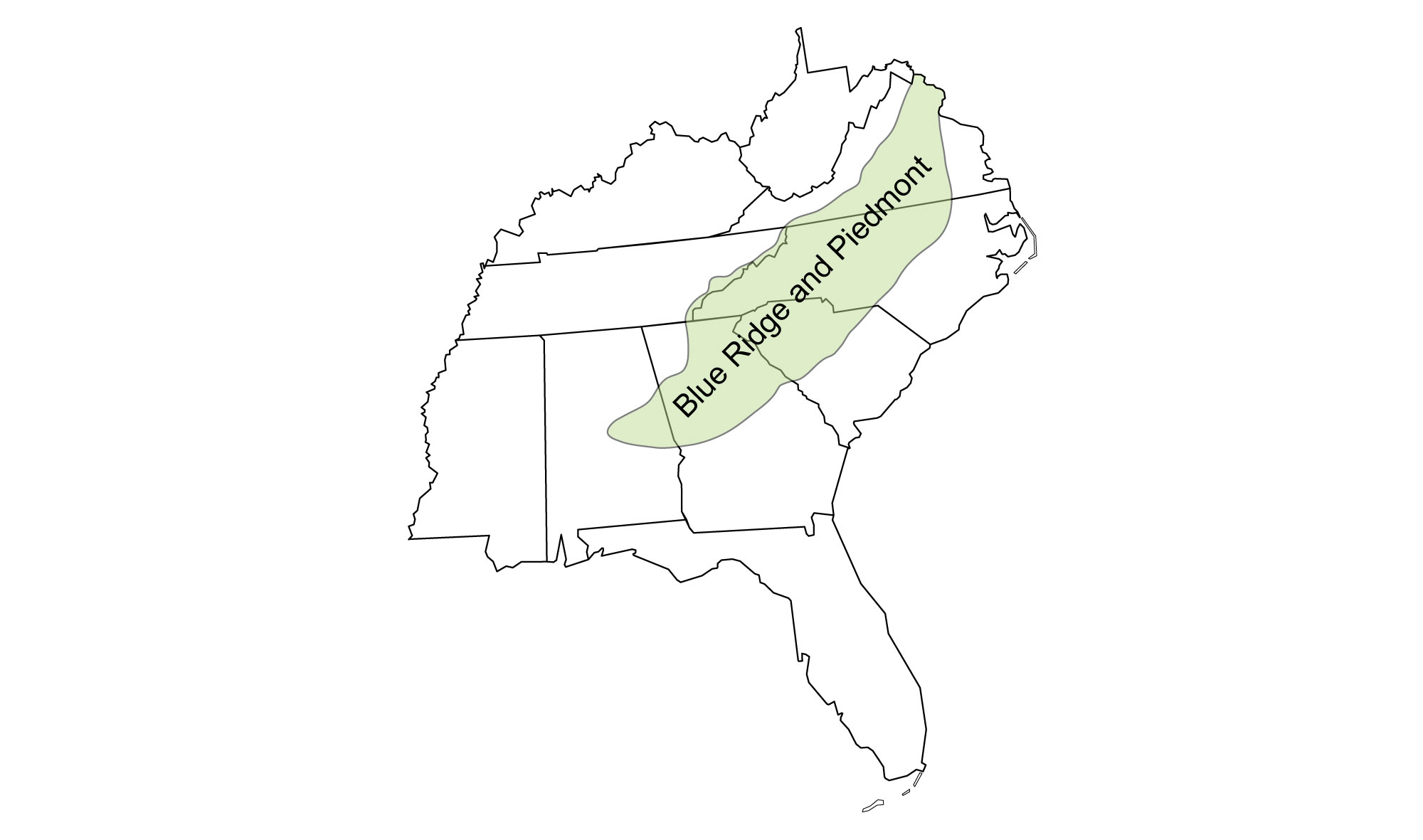 Page snapshot: Introduction to energy in the Blue Ridge and Piedmont region of the southeastern United States, including fossil fuels, renewable energy, and nuclear power.

Credits: Most of the text of this page is derived from "Energy in the Southeastern US" by Carlyn S. Buckler, Peter L. Nester, Stephen F Greb, and Robert J. Moye, chapter 6 in The Teacher-Friendly Guide to the Earth Science of the Southeastern U.S., 2nd ed., edited by Andrielle N. Swaby, Mark D. Lucas, and Robert M. Ross (published in 2016 by the Paleontological Research Institution; currently out of print). The book was adapted for the web by Elizabeth J. Hermsen and Jonathan R. Hendricks in 2021–2022. Changes include formatting and revisions to the text and images. Credits for individual images are given in figure captions.

The Blue Ridge and Piedmont is not known for its energy production by comparison with the other regions of the Southeast. Fossil fuel resources here are minimal, hydroelectric power generation occurs mostly along the region's eastern periphery, and solar and wind production remain minor compared to total energy demand. Nuclear power is a major local source of energy production.

Oil and gas are not produced in the Blue Ridge and Piedmont region. The area is underlain primarily by igneous and metamorphic rocks, which do not form under the conditions necessary to produce petroleum.

Bituminous coals occur in small, isolated Triassic and Jurassic rift basins in the North Carolina and Virginia Piedmont. These rifts formed as the supercontinent Pangaea broke apart during the Mesozoic, creating numerous cracks in the crust along the margins of North America, Africa, and England. The rift basins filled with sediment, sometimes becoming swampy lowlands. Peats accumulated in these swamps and were altered to coal after they were buried. 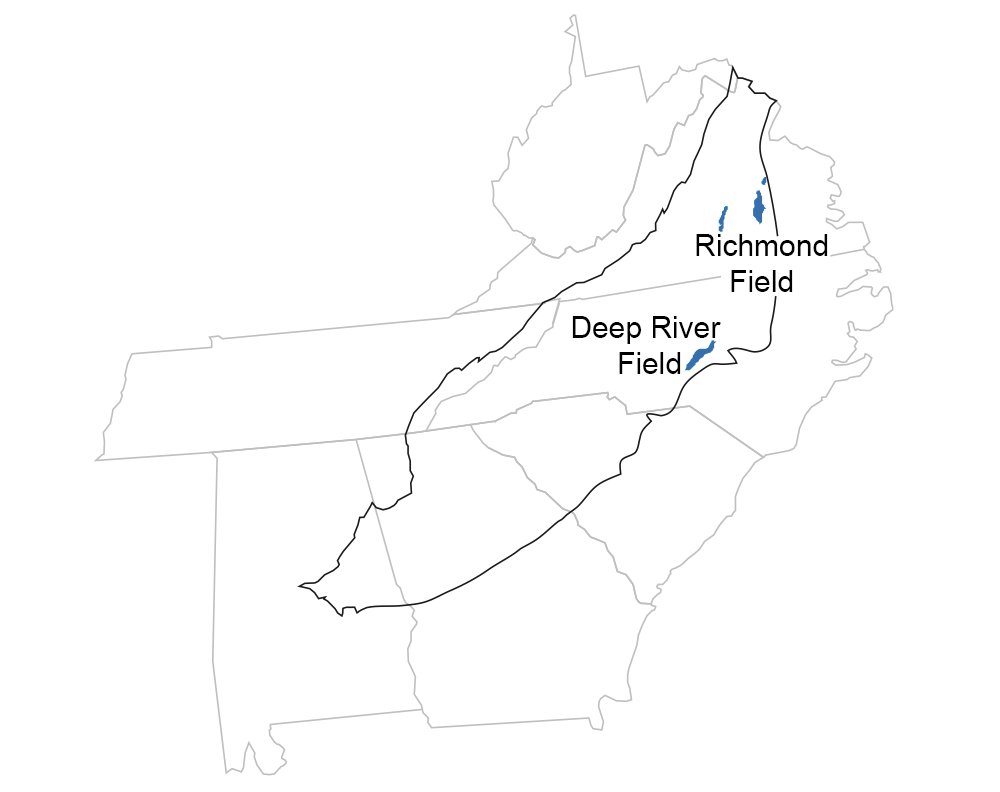 Coal in the Blue Ridge and Piedmont region of the Southeast is found only in Triassic- and Jurassic-aged rift basins. Image by Jim Houghton, modified from original for the [email protected] project.

None of the coal deposited in the Triassic-Jurassic rift basins is currently mined, although there has been some historic production. The Richmond Basin of Virginia was the nation's first major coal field. It was discovered in 1699 and mined primarily in the early 1800s. Prior to and through the Civil War period (1861–1865), many enslaved people worked in the mines in this region. Mining was sometimes dangerous. In 1839, an explosion in the Black Heath Mine killed more than 50 men, most of whom were enslaved. An 1882 explosion at the Grove Shaft killed 32 men. Remains of some historical structures built for the mines in the Richmond Basin are still preserved in Mid-Lothian Mines Park in Midlothian, Virginia.

The only other notable coal deposits in the Southeast's Mesozoic rift basins are those of the Triassic Deep River rift basin in North Carolina. Bituminous coal beds there, occupying a zone about 56 kilometers (35 miles) long and 8 to 16 kilometers (5 to 10 miles) wide, were mined for about a century between the 1850s and 1950s. Production during 1949 was around 14,000 tons. The coal seam is deeply buried, however, and badly broken by numerous dissecting faults. Mining ceased in 1953, and an estimated 110 million tons of coal remain in the area. 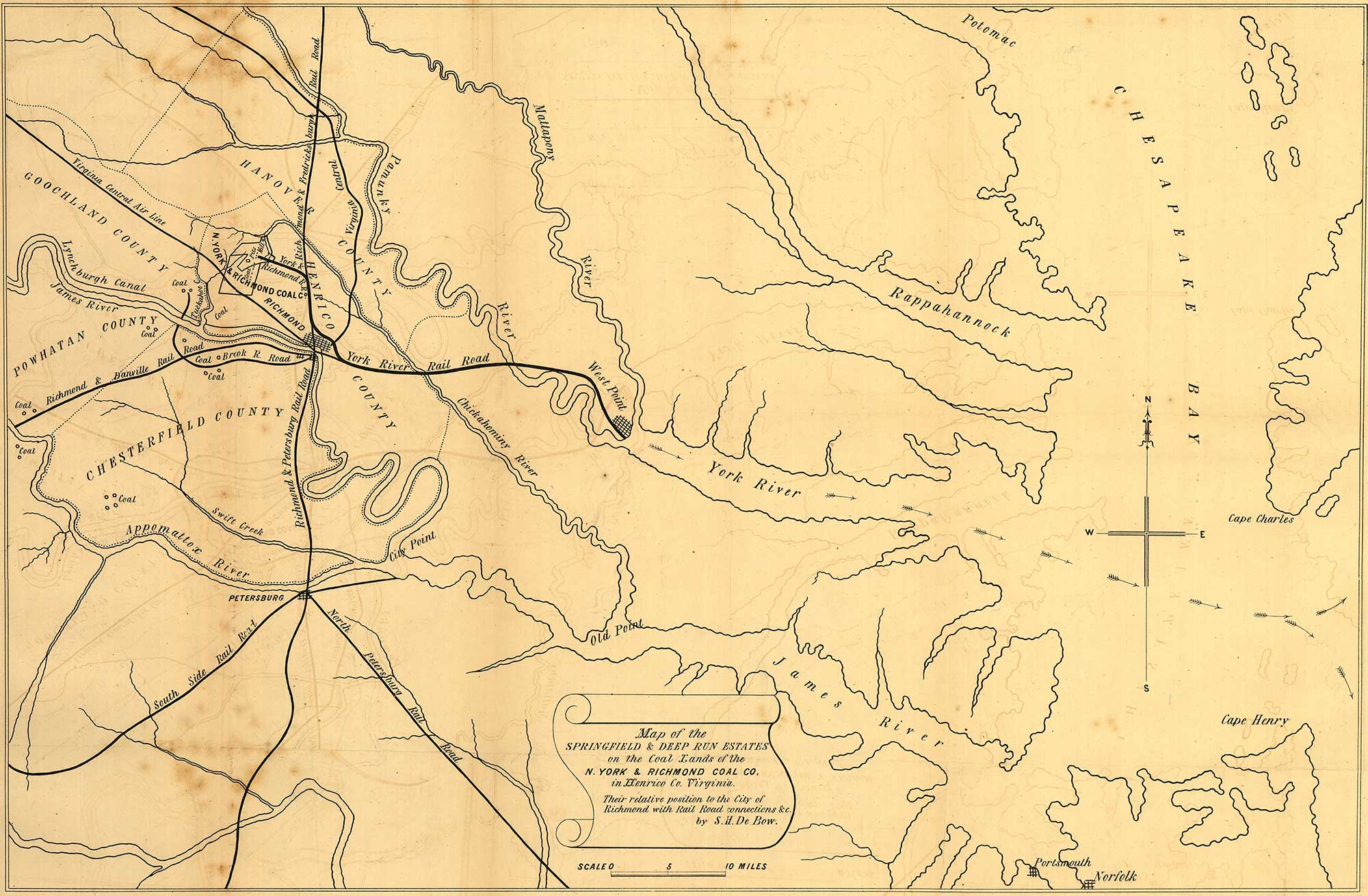 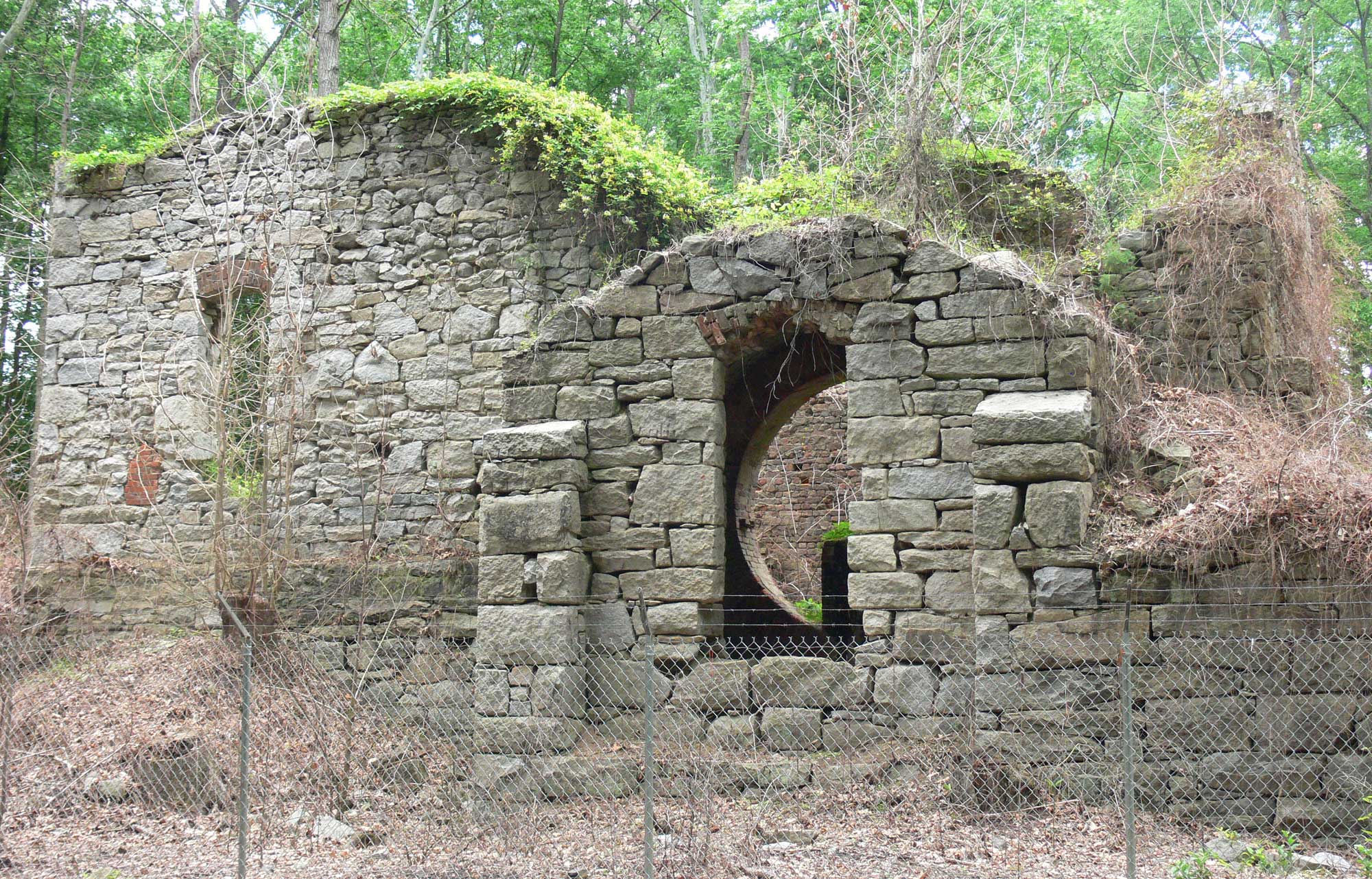 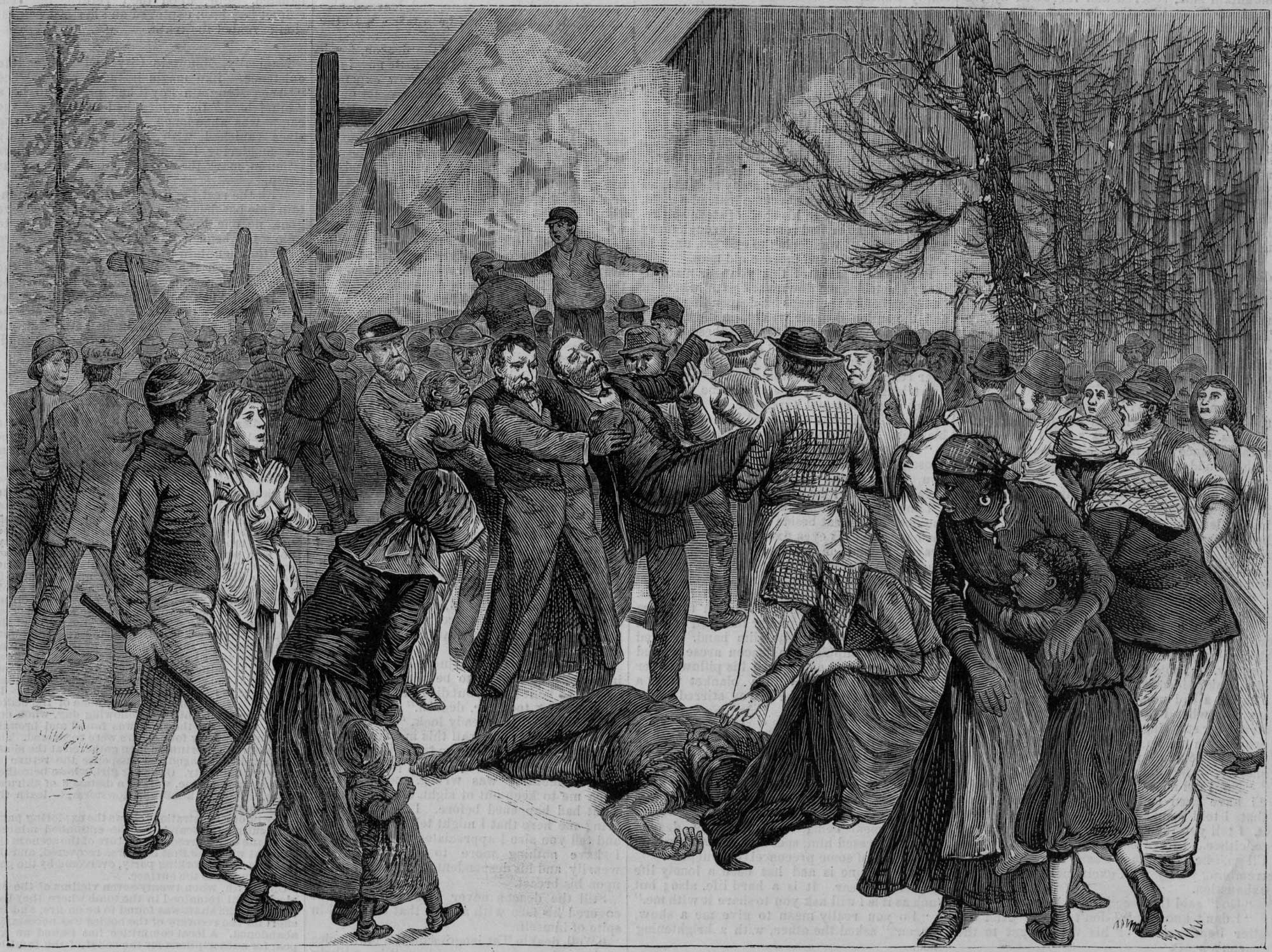 This illustration shows the aftermath of the Midlothian Mine Disaster that took placed on February 3, 1882. In this disaster, a buildup of methane gas caused the Grove Shaft (pictured above) to explode; 32 miners were killed. The men who are passed out in the image above are rescuers who were overwhelmed by gas. Mining in the area ceased in the 1920s. Illustration after a sketch by F.C. Burroughs, Harper & Brothers, Publishers, February 18, 1882. Source: Virginia Commonwealth University Libraries Commons (flickr, public domain).

The North Carolina Clean Energy Technology Center at North Carolina State University works to promote and educate the public about solar, wind, biofuel, and other renewable energy options throughout the state.

North Carolina is a leader in solar energy in the Southeastern US. The state’s solar electric power production in 2015 accounted for more than twice the total production for all the other states in the Southeast combined. Nevertheless, California accounts for more than half of the country’s solar electric production, and the total US output of solar power is also dwarfed by other sources. A few solar plants are also scattered across Georgia’s Piedmont. 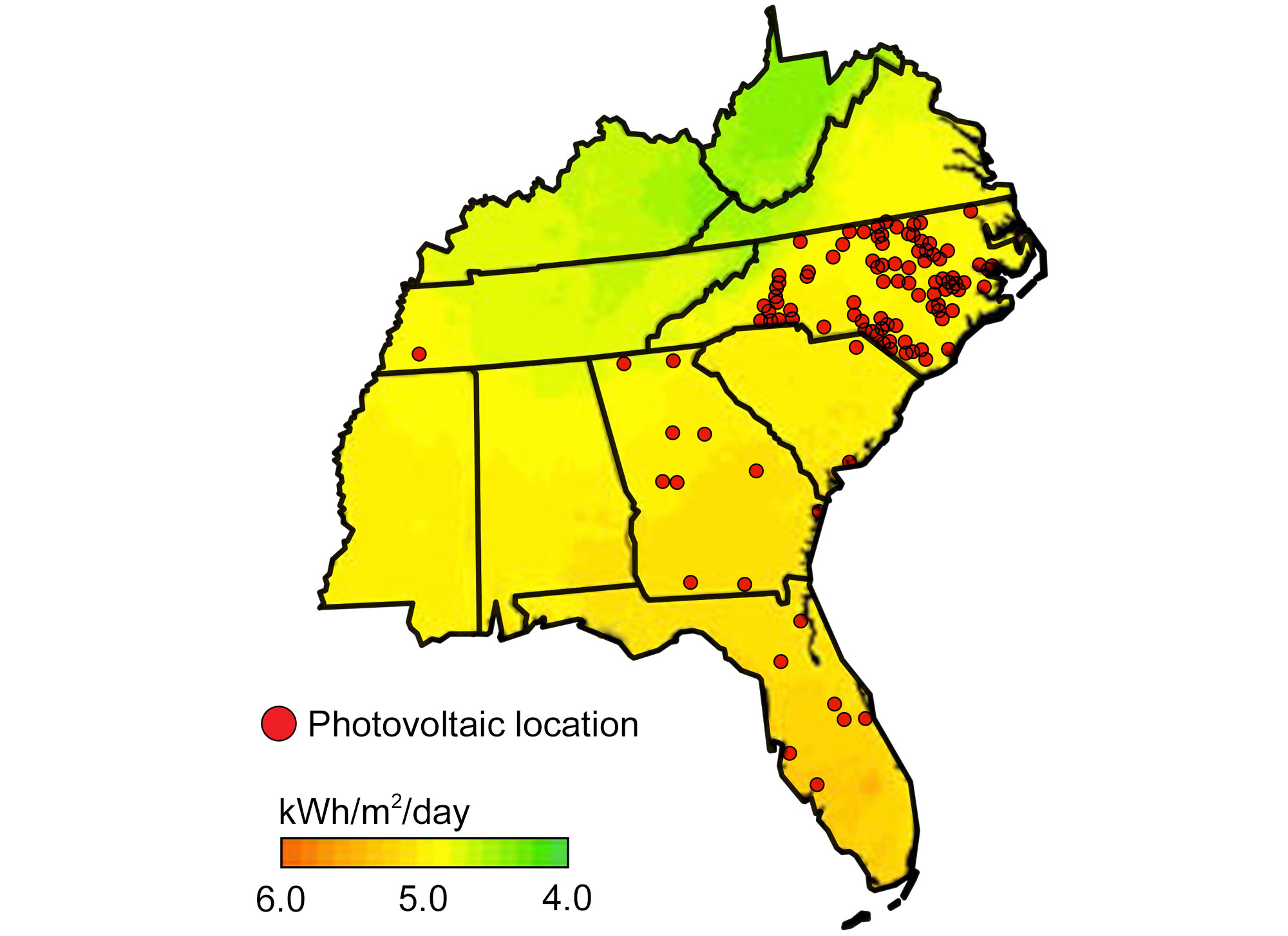 Locations of existing photovoltaic power plants overlaid on a map of the annual average solar resource for the Southeastern US. Modified from original by Wade Greenberg-Brand (adapted from an image by Britannica Online for Kids) for [email protected] project.

Precipitation and the relatively high topographic area associated with the Blue Ridge and Piedmont provide the region with great potential for hydroelectric power, which uses the gravitational force of falling or rushing water to rotate turbines that convert the water’s force into energy. There are also several pumped storage facilities within the region, where water is pumped uphill into reservoirs in times of excess production, essentially acting as batteries.

Hydroelectric plants are scattered throughout the Blue Ridge and Piedmont; many are located along the topographic drop associated with the Fall Line, where the harder rocks of the Piedmont meet the sediments of the Atlantic Coastal Plain. The steep relief and waterfalls of the Appalachian Mountains, especially in western North Carolina and northern Georgia, also provide ample opportunities for hydroelectric production. North Carolina ranks 9th in the US for hydroelectric generation, with over 70 hydroelectric dams. Nevertheless, hydroelectricity accounts for only about 3% of the state's electric demand. 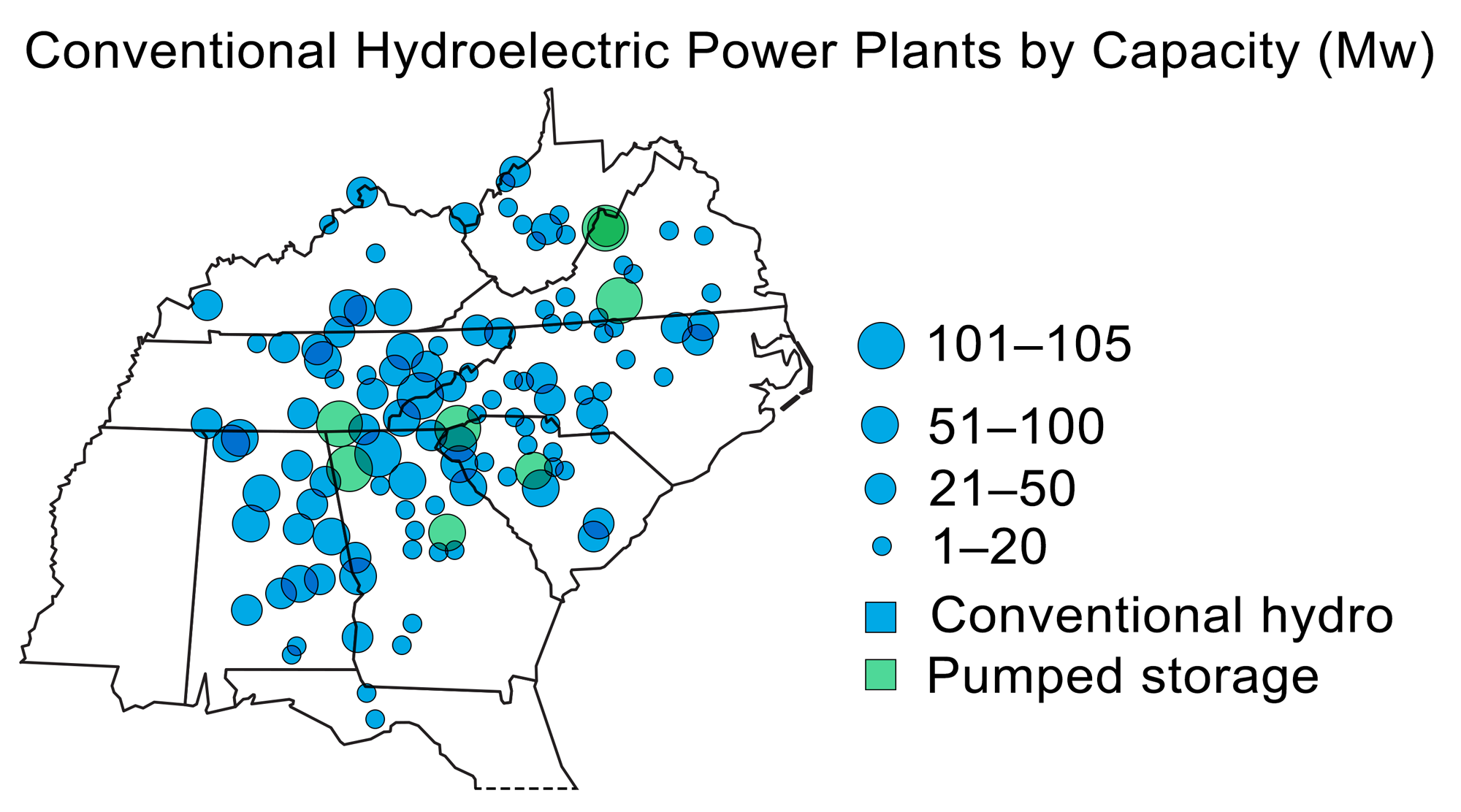 Hydroelectric power plants in the Southeastern US. Modified from the original by Wade Greenberg-Brand (adapted from image by US Energy Information Administration) for [email protected] project. 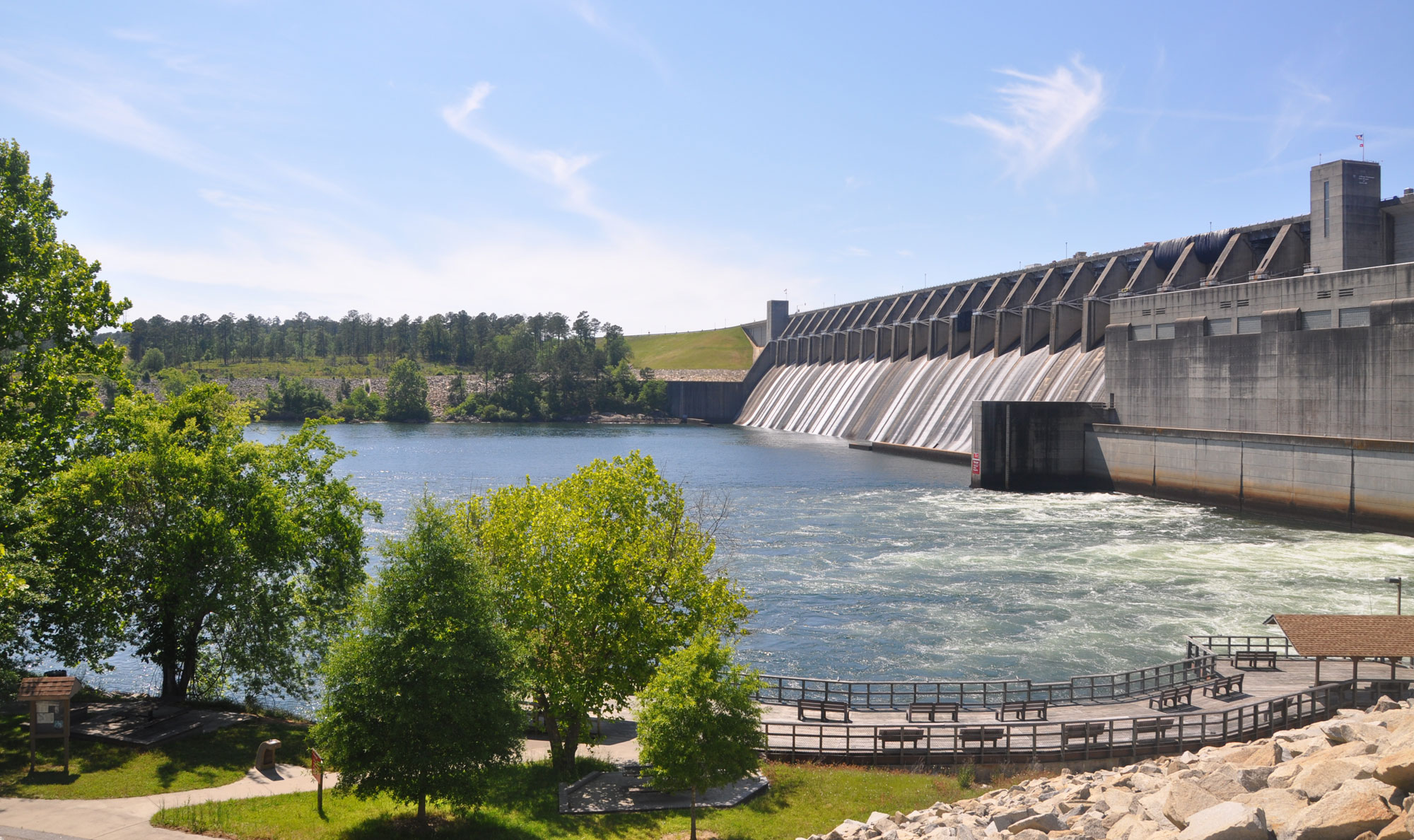 Nuclear power is a major source of energy production in the Blue Ridge and Piedmont, especially in North and South Carolina. Throughout the Piedmont, abundant rivers and lakes provide the means to facilitate the production of nuclear energy. Currently, Virginia and the Carolinas are planning expansions of their existing plants, or bringing new plants on board. North Carolina has also been at the forefront of expanding its solar power production, taking advantage of several federal government incentives to increase the state’s solar energy production by over 1100% since 2007. 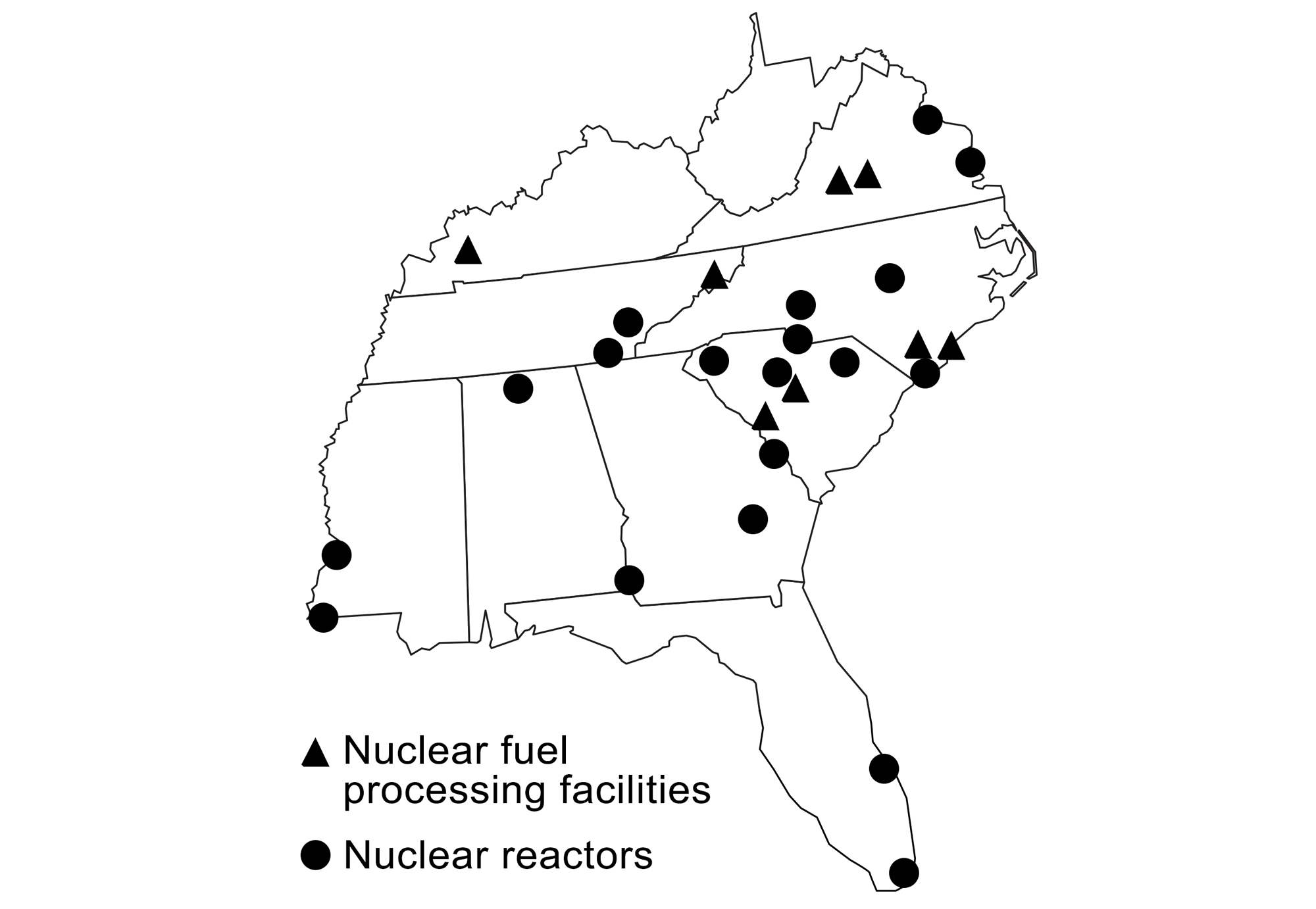 Production of nuclear power and locations of nuclear fuel processing facilities in the southeastern states. Modified from original by Wade Greenberg-Brand (adapted from images by the US Energy Information Administration and Kenny Moore via Wikimedia Commons) for the [email protected] project. 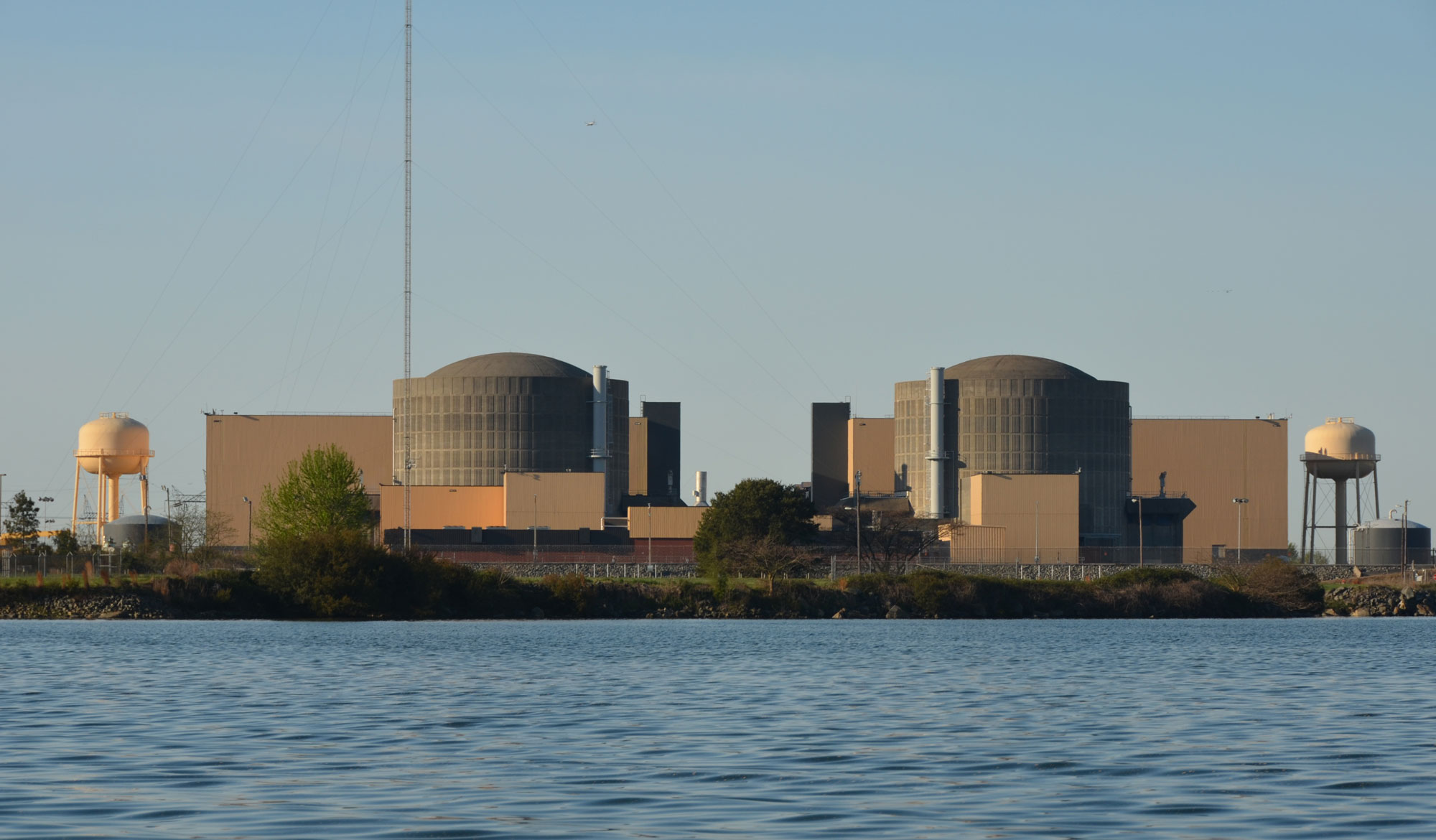