The Inland Basin region primarily contains the story of Paleozoic mountain-building events, associated sediment deposited in the inland sea, and changes in relative sea level, superimposed on the evolution of Paleozoic marine and coastal plant life.

Exposures of Cambrian rocks with fossils are uncommon in this region, but a few can still be found. The early Cambrian Antietam Sandstone of West Virginia and Virginia contains Skolithos trace fossils (see below), as well as occasional trilobites and brachiopods. Early Cambrian fossils, especially trilobites, are also found in western Virginia, eastern Tennessee, and northwestern Georgia.

In eastern Tennessee (near Knoxville), trilobite trace fossils called Rusophycus and Cruziana are common in Cambrian rocks that appear to have been deposited in intertidal environments. 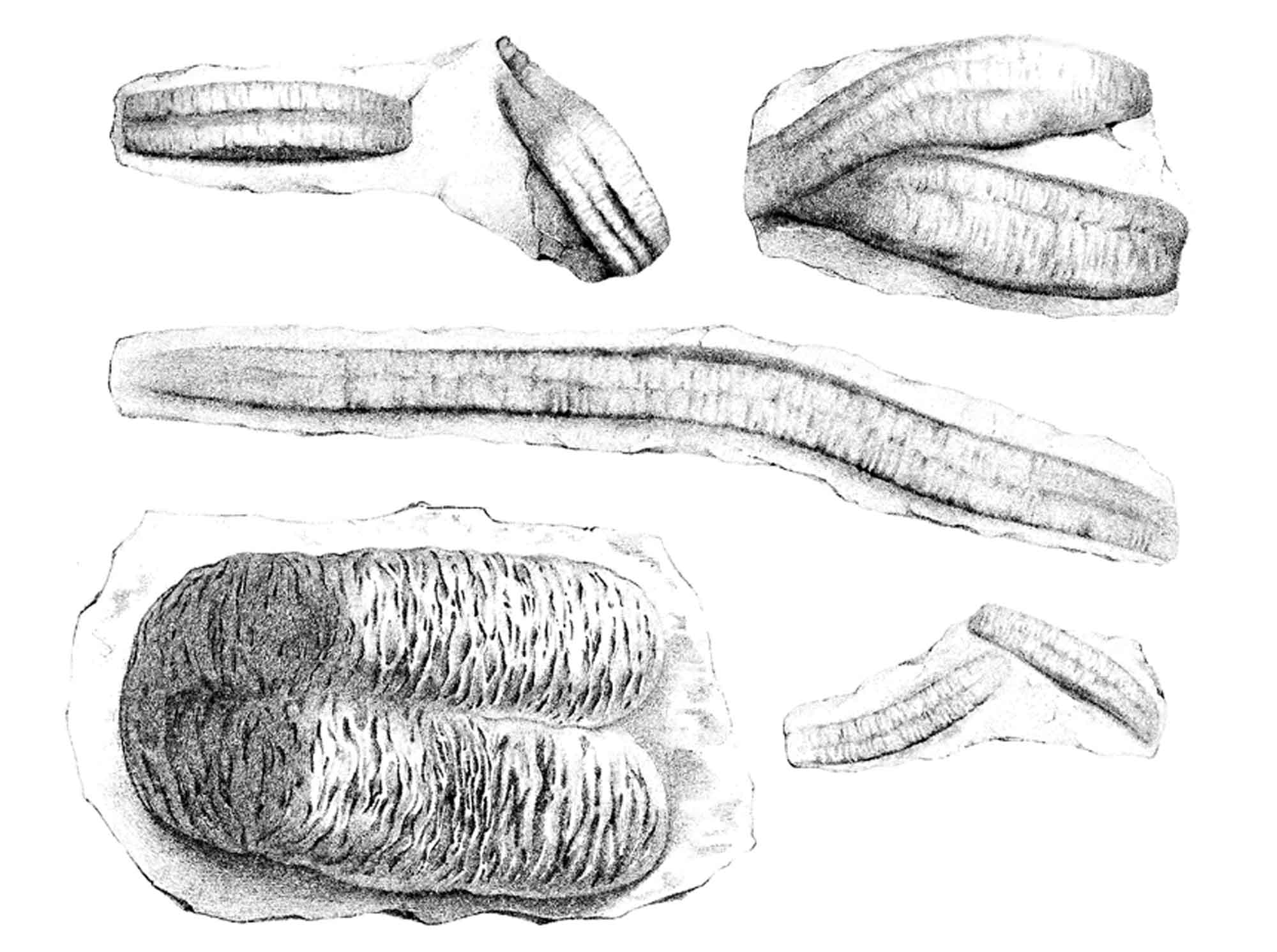 Trace fossils commonly associated with trilobites. Rusophycus are resting traces, recording the outline of the organism while it remains still. Cruziana are elongate, bilaterally symmetrical paths with repeated striations, recording the animal’s movement through the mud.

Trace fossil specimen of Rusophycus bilobatus from the Silurian Rose Hill Shale of Scott County, Virginia (PRI 76852). This resting trace was likely made by a trilobite. Specimen is from the research collections of the Paleontological Research Institution, Ithaca, New York. Longest dimension of rock is approximately 9.5 cm (Sketchfab; Creative Commons 0 license).

Shales and concretions in the middle Cambrian Conasauga Formation of northeastern Alabama and northwestern Georgia contain body and trace fossils showing the preservation of diverse soft-bodied organisms, as well as many mineralized skeletons. These include algae, sponges, arthropods, brachiopods, echinoderms, mollusks, and trace fossils. Some of the most curious Conasauga fossils are "star cobbles," referred to the genus Brooksella. These enigmatic fossils have been variously thought of as medusae (jellyfi sh), algae, trace fossils, or inorganic structures. Recent research suggests, however, that they are most likely sponges with siliceous (SiO2) skeletons. 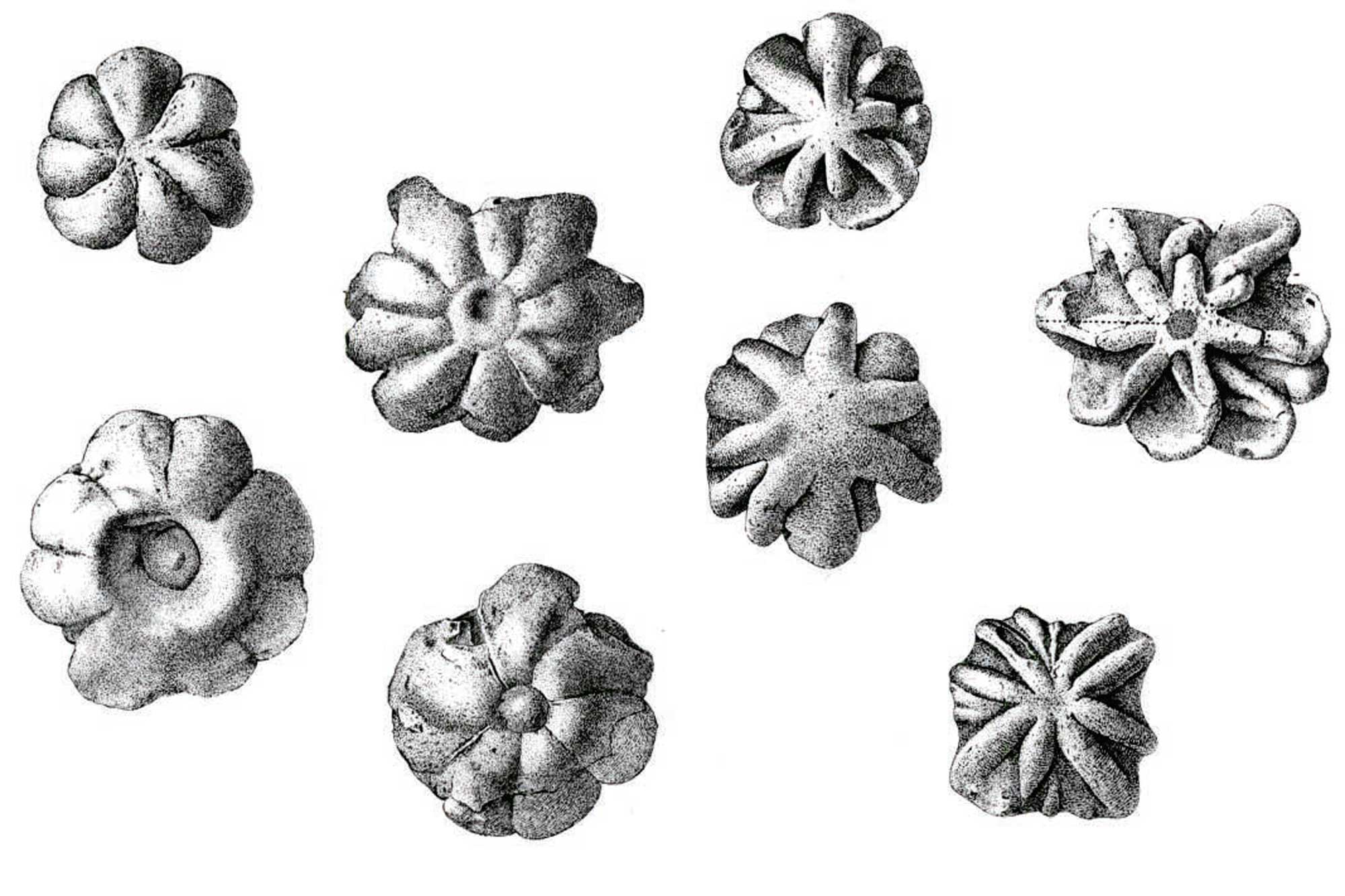 "Star cobbles" (Brooksella) from the Cambrian Conasauga Formation. Fossils are 2.5–centimeters (1–2 inches) across. Images from Walcott (1898; Monographs of the U.S.G.S, 30); public domain.

Ordovician, Silurian, and Devonian marine fossils are widespread in the Inland Basin and are typically abundant, diverse, and beautifully preserved. These fossil assemblages are nearly always dominated by brachiopods, but also contain trilobites, graptolites, corals, clams, crinoids, Skolithos, and many others. 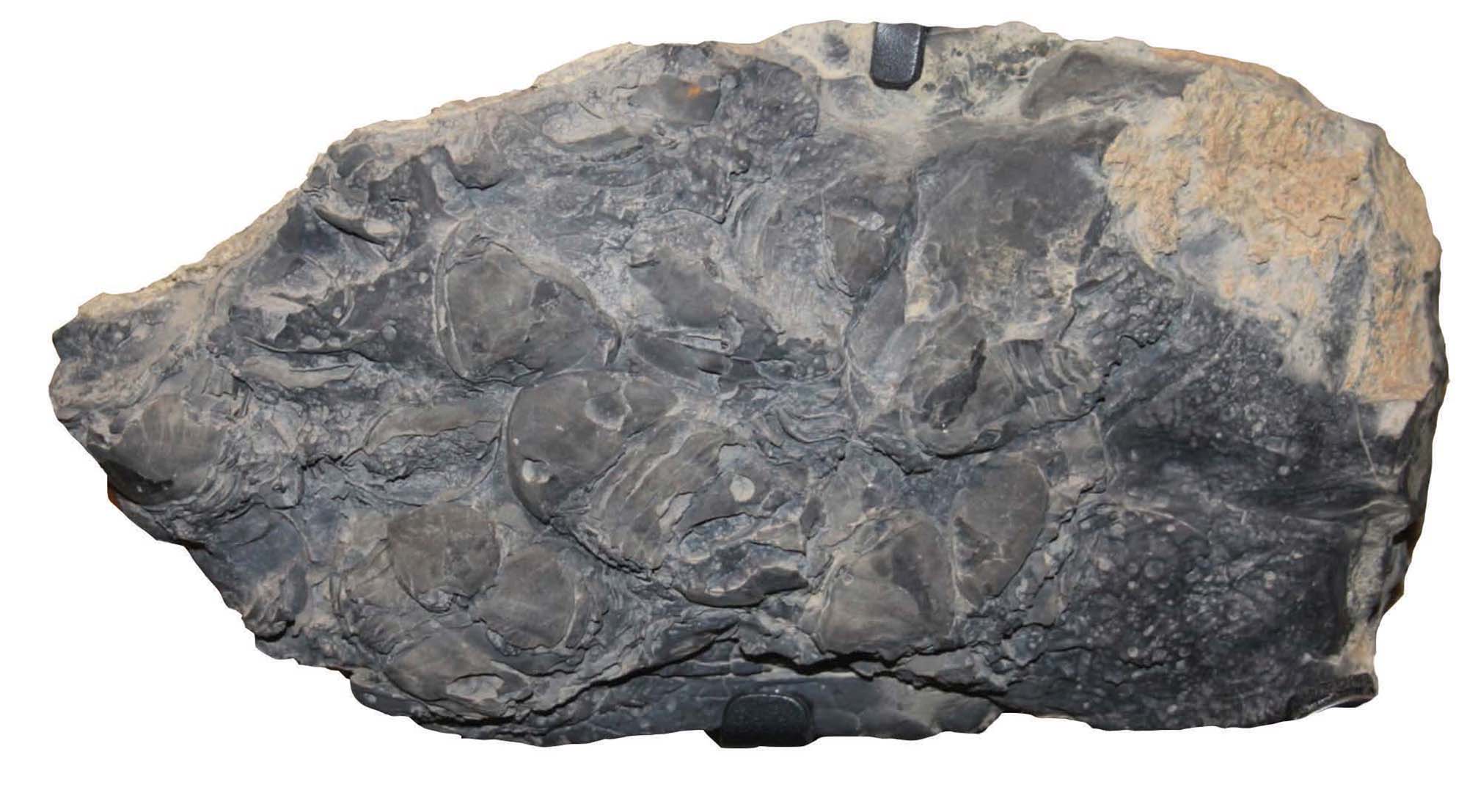 Slab of trilobites, Homotelus sp., from the Ordovician of Virginia, approximately 38 centimeters (15 inches) across (PRI 40023; photograph by Wade Greenberg-Brand).

Middle Ordovician limestones in Tennessee are well known for containing numerous crinoids and fossils of the large gastropod Maclurites.

In Kentucky and Tennessee, trilobites, brachiopods, bryozoans, corals, and the distinctive sponge Brachiospongia are also found in Ordovician rocks. 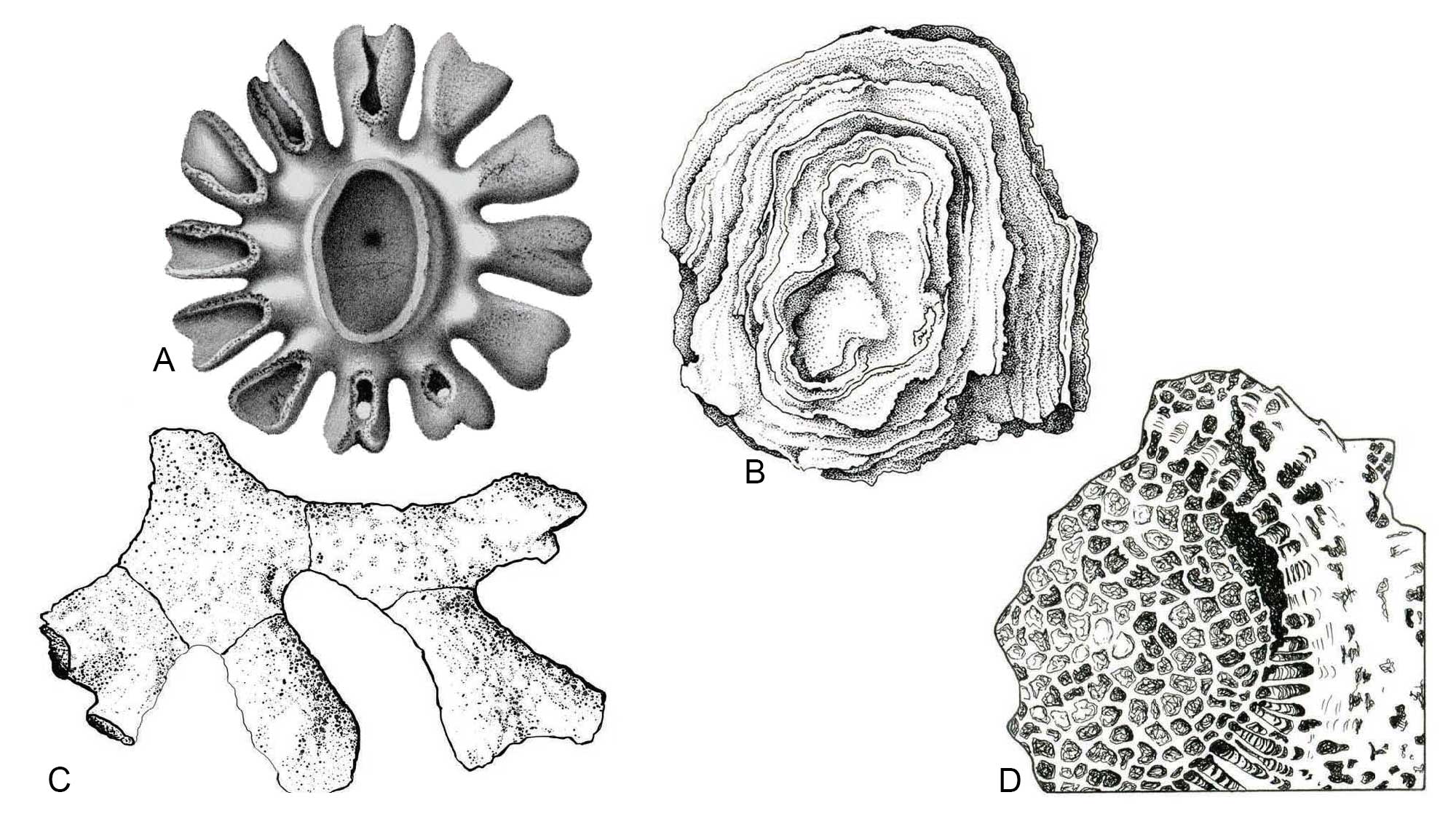 Late Ordovician fossils are abundant in central Tennessee (around Nashville), central Kentucky (southeast of Louisville), and northern Kentucky. Ordovician limestones in the area around Strasburg, Virginia contain abundant trilobites. The fossils are preserved as silica (SiO₂), and can therefore be extracted from the surrounding carbonate rock by treating it with dilute acid. This allows for the examination of delicate fossils that would otherwise be impossible to study.

In Alabama, the Silurian Red Mountain Formation, which is rich in the iron mineral hematite, contains significant reefs made largely of stromatoporoid sponges. Skolithos can be found throughout Silurian deposits in Tennessee, while Silurian deposits in Virginia contain abundant corals and brachiopods. 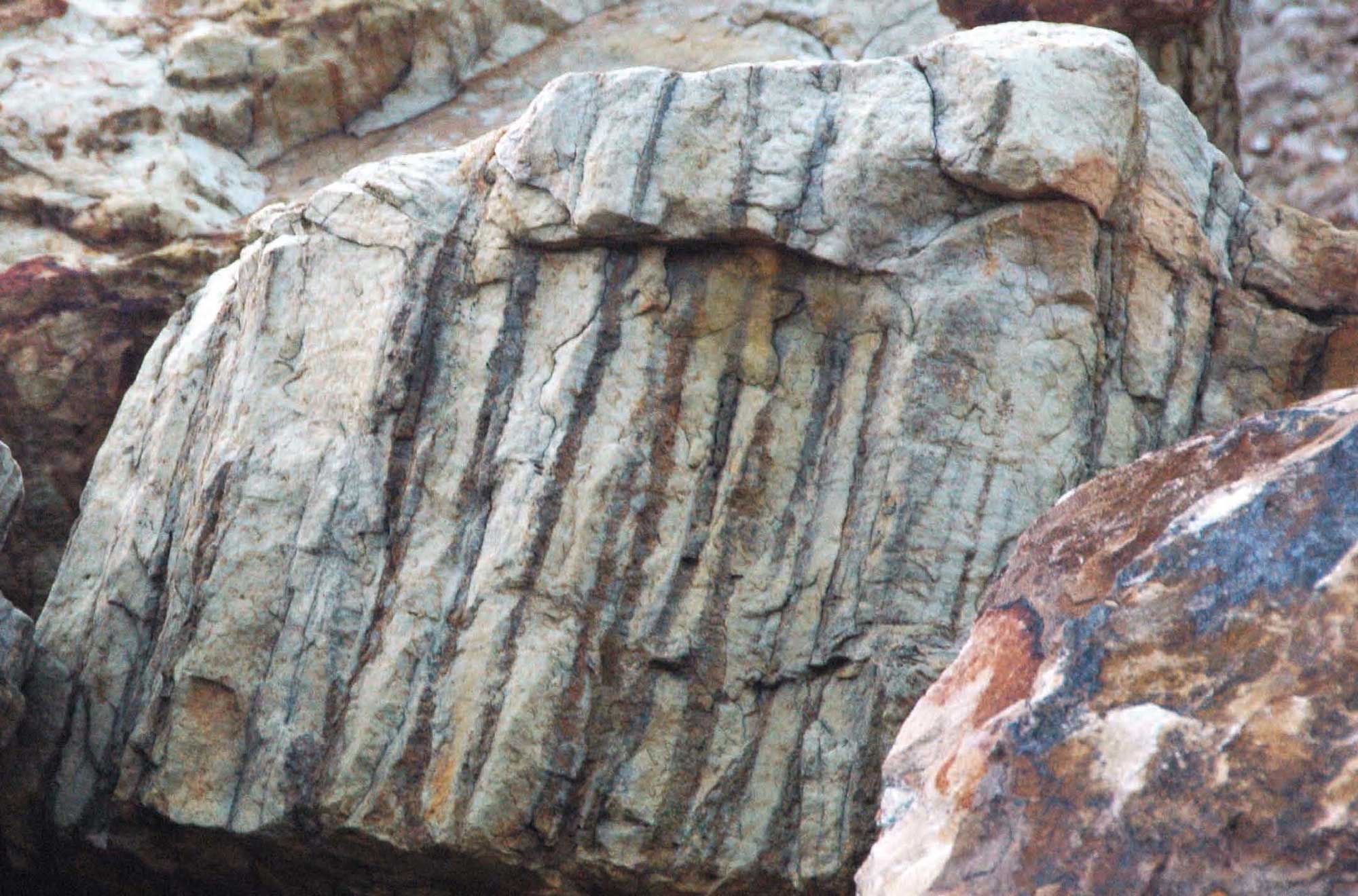 Early to middle Devonian marine fossils are spectacularly exposed in the 390-million-year-old rocks at Falls of the Ohio in northern Kentucky. These beds of limestone are among the largest naturally exposed Devonian fossil deposits in the world, packed with the skeletal remains of countless corals, stromatoporoid sponges, echinoderms, brachiopods, mollusks, arthropods, and microscopic organisms. Well-preserved Devonian marine invertebrate fossils also occur in Tennessee, Virginia, and West Virginia. 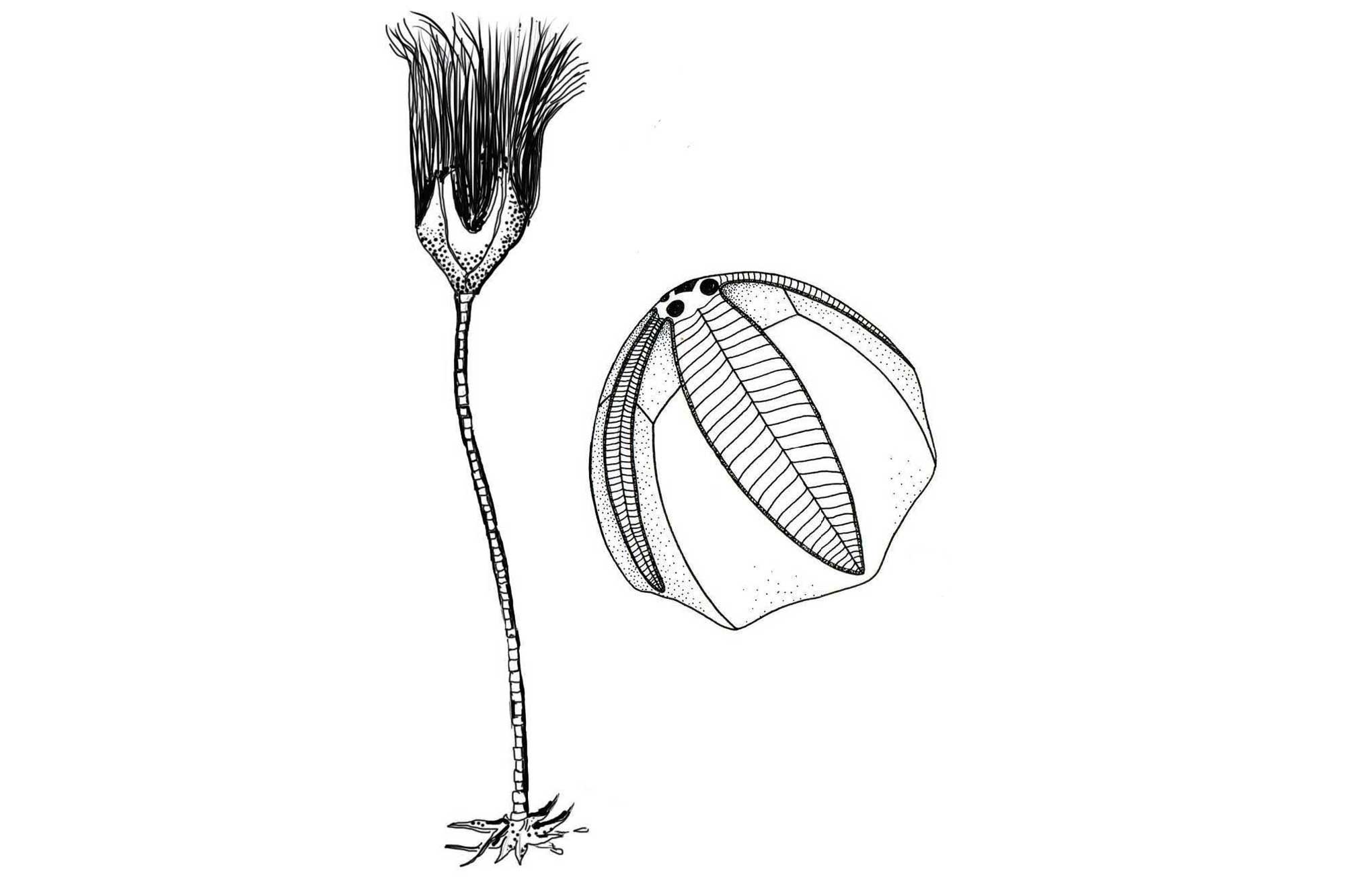 Blastoid, Pentremites sp. Blastoids were a group of stalked echinoderms similar to crinoids. The calyx of a blastoid did not have long arms, but instead a series of holes called brachioles that held much shorter arms. Left, Restoration, approximately 15 centimeters (6 inches) tall. B, Calyx. Image credits: Left, image by Alana McGillis, from image by Illinois State Geological Survey; Right, copyright Christi Sobel.

In fact, West Virginia’s official state "gemstone" is Lithostrotionella, a Mississippian fossil coral from the Hillsdale Limestone found in portions of Greenbrier and Pocahontas counties. Crinoids are especially abundant; the Mississippian is sometimes referred to as the "age of crinoids," because they were so abundant that entire rocks are made up of bits of their calcite skeletons. 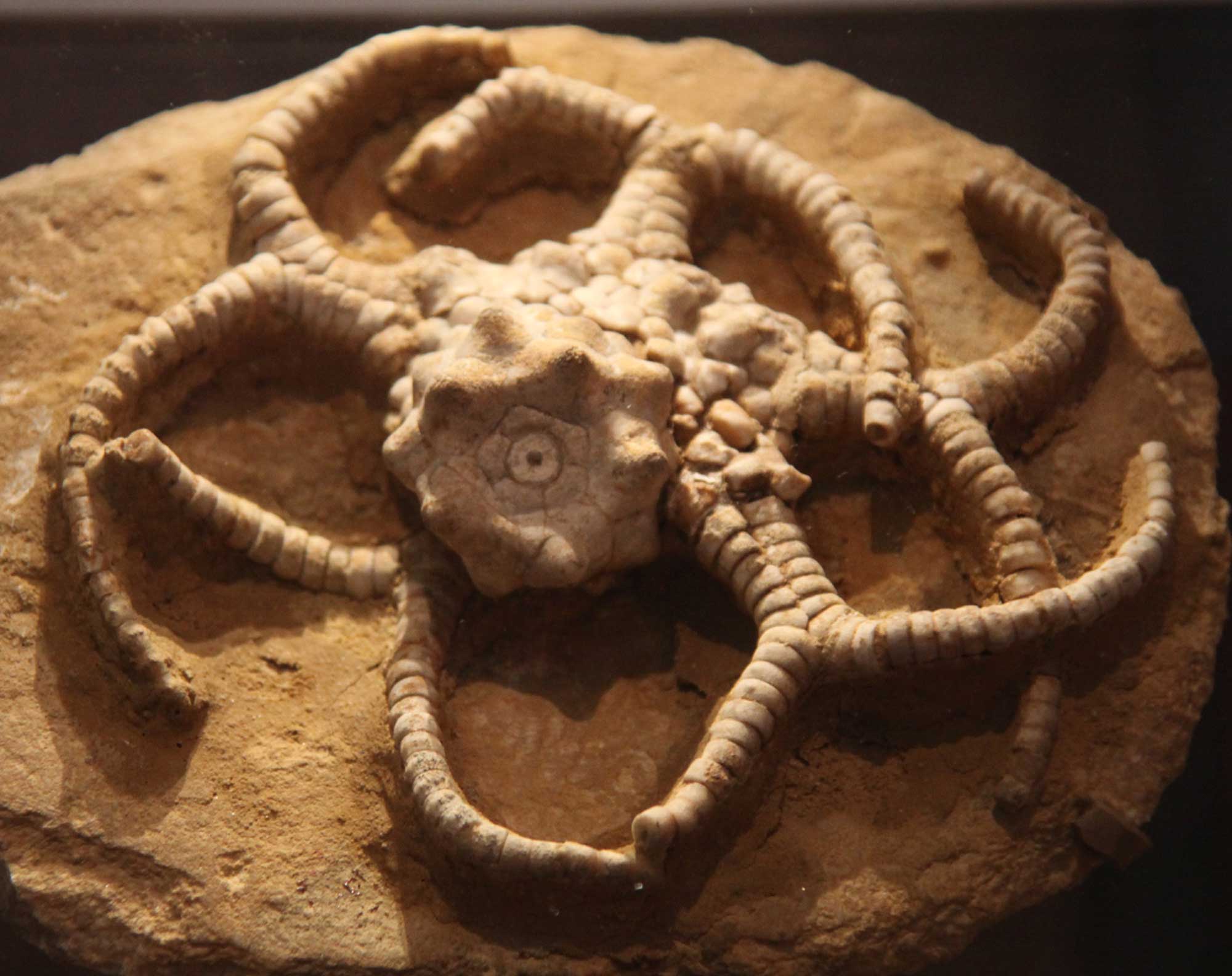 Carboniferous trilobites have also been found in northwestern Georgia and northern West Virginia.

Sharks and bony fishes evolved rapidly during the Devonian and Carboniferous periods, and their fossils can sometimes be found in the rocks of the Inland Basin. Fossils of heavily armored bony fishes called placoderms are found in Kentucky and Tennessee, including the enormous Dunkleosteus.

Cast of a Dunkleosteus skull on display at the Museum of the Earth, Ithaca, New York.

The teeth of sharks, which first appeared in the late Silurian period, are also preserved in these rocks. Among these are the bizarre and puzzling coiled tooth whorls of edestid sharks—these are sometimes found in shales overlying coal seams, indicating that the sharks inhabited shallow waters near shore.

The oldest known fossils of land plants are isolated spores dating to the Ordovician Period. By the late Silurian, fossils of simple, leafless stems just a few centimeters tall are found in sediments that accumulated in low, wet, coastal environments. The first trees date to the early part of the Devonian period, and the first seeds to the middle Devonian; Devonian plant fossils are found in northeastern Alabama (Cherokee County). By the end of the Devonian, extensive forests containing many different kinds of trees and other plants had developed, and this continued into the Carboniferous period that followed. During the Mississippian and (especially) the Pennsylvanian, what is now the Interior Basin region of the Southeast was a broad, low coastal plain near the Equator and home to extensive swampy forests.

The swamp forests that grew on Carboniferous coastal plains west of the Appalachian Mountains were dominated by four major groups of plants, each of which had independently evolved the style of growth known as the tree (a plant held erect by a single stem made of a stiff tissue called wood). The trees found in these forests, however, did not belong to the familiar groups that dominate modern forests, such as conifers and flowering broadleaf trees. Instead, these early forests were built by groups of plants that are either extinct or much less conspicuous today. These groups were the lycopods (club mosses), the sphenopsids (horsetails), the ferns, and the cordaites. Lycopods and horsetails survive today, but only as small, non-woody herbaceous plants. Tree ferns still grow today, but only in relatively restricted environments such as permanently moist subtropical forests. Cordaites are extinct.

The Carboniferous coal swamps were also home to a great diversity of animals, including insects, amphibians, and early reptiles (Figures 3.28 and 3.29). Although fossil bones have been found in Mississippian and Pennsylvanian rocks in West Virginia, Virginia, and Alabama, trace fossils are more common. One particular trackway site in Walker County, Alabama is one of the largest known Carboniferous track sites in the world (learn more).

The Interior Basin contains no fossil-bearing outcrops of Mesozoic age. It does, however, have a rich fossil record from the Neogene, including numerous sites at which Pleistocene and older terrestrial vertebrates have been found.

For instance, the Gray Fossil Site is located near the small town of Gray in Washington County, northeastern Tennessee. It was discovered in 2000, when a road project unearthed fossil bones in a thick bed of clay that had apparently accumulated in a flooded sinkhole. Subsequent excavation revealed the bones of numerous species of mammals, reptiles, and amphibians. The particular species present constrain the age of the surficial fossil-bearing layer to the early Pliocene. The fossils recovered from the site so far are noteworthy for other reasons. The site is the world’s largest fossil tapir find; it also contains the most complete skeleton of Teleoceras (an ancient rhinoceros) found in eastern North America, as well a new species of red panda that marks only the second (and most complete) record of this group in North America. Other fossil mammals present at the Gray Site include shrews, moles, rabbits, rodents, weasels, short-faced bears, sabertoothed cats, shovel-tusked elephants (gomphotheres), camels, peccaries, ground sloths, and three-toed horses.

The red panda Pristinailurus bristoli. Left: Specimen found at Gray Fossil Site, Tennessee, on display in the museum at the site (photograph by Elizabeth J. Hermsen). Right: Reconstructions of the skull and complete animal; drawings by Christi Sobel.

"Gray Fossil Site" by ETSU Natural History Museum & Gray Fossil Site (YouTube).
Gray Fossil Site is best known for its fossil vertebrates, but numerous plant fossils have also been found at the location. These plant fossils—which mostly consist of pollen, fruits, and seeds, but also include fragments of other plant parts—help paleontologists reconstruct the ancient environment at this locality and also inform our understanding of the evolutionary histories of the plants themselves. A presentation about the plant fossil record of Gray Fossil Site by PRI's Dr. Elizabeth Hermsen is available to view here and is part of a series of "Paleo Talks" that covers all aspects of the biota of this location. 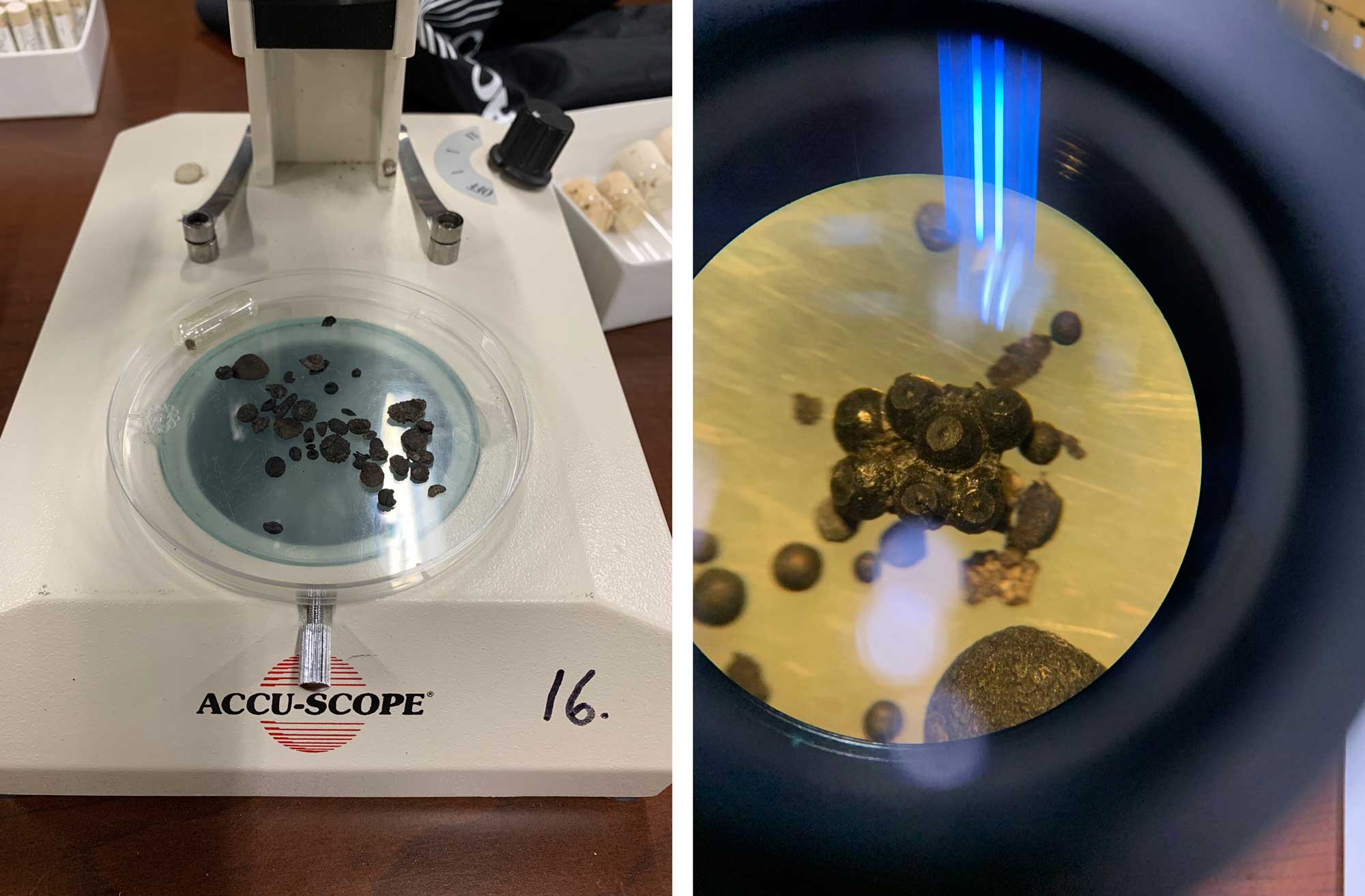 Left: Fossil plant seeds from Gray Fossil Site; many are small and require a microscope to study. Right: An unidentified fossil viewed through a microscope eyepiece. Photographs by Elizabeth J. Hermsen.

Bones of Pleistocene mammals are widespread and locally abundant throughout Kentucky, Tennessee, western Virginia and West Virginia, and northern Alabama. They occur mainly in caves, sinkholes, and boggy deposits, and include mastodons, mammoths, giant sloths, and peccaries. Fossils of bats from the late Pleistocene (38,000 years ago) have been found in guano deposits in Mammoth Cave, Kentucky. Perhaps the most famous Pleistocene mammal site in the region is Big Bone Lick, located less than 2 kilometers (1.2 miles) south of the Ohio River in Boone County, Kentucky. 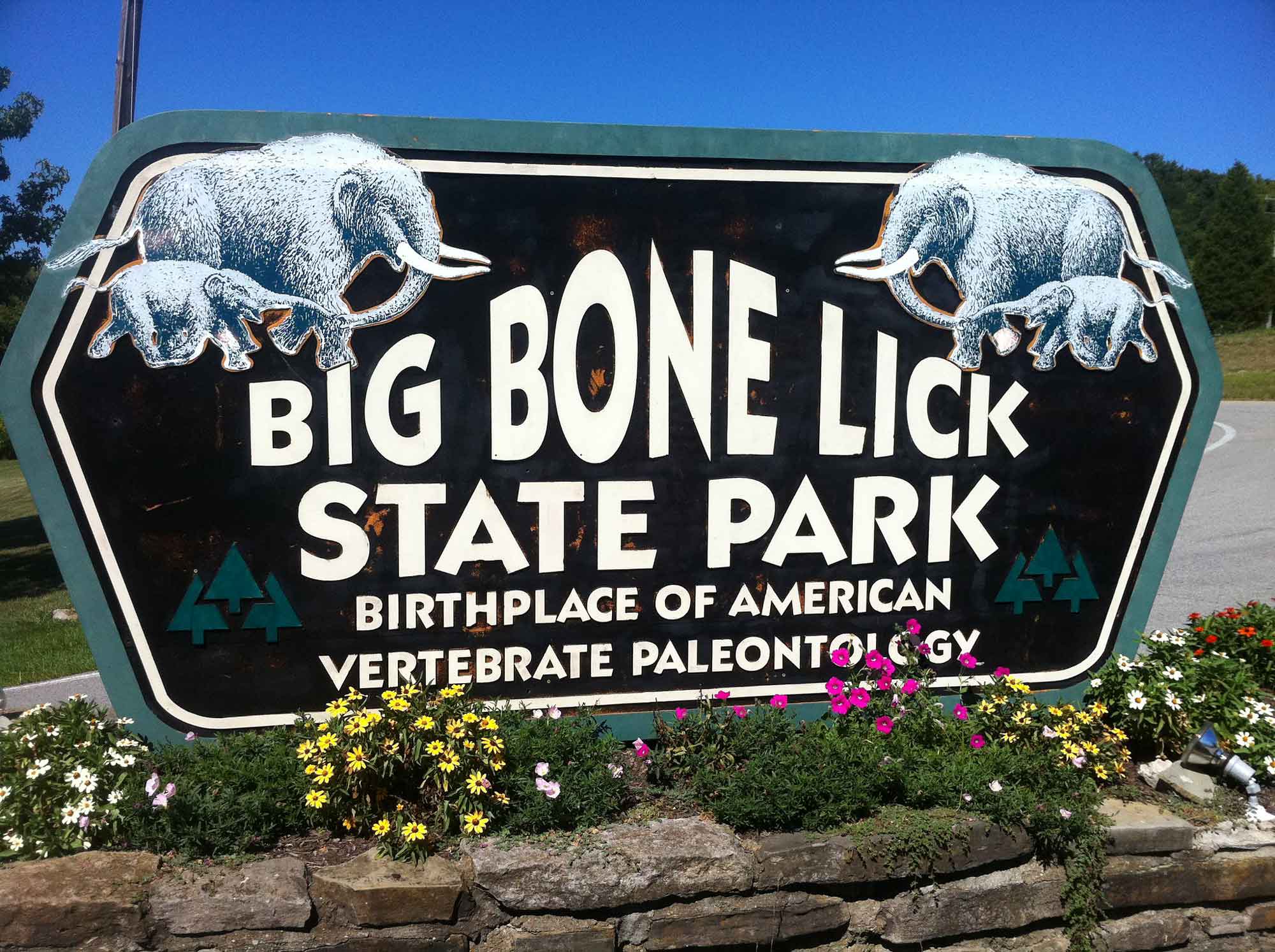 Big Bone Lick is sometimes called the "birthplace of American vertebrate paleontology" because the first published illustration of a mastodon fossil (in 1756) was based on a tooth collected there. US President Thomas Jefferson acquired fossils from the site in 1808 that eventually ended up at the Academy of Natural Sciences of Philadelphia, the Natural History Museum in Paris, and as part of Jefferson's personal collection at Monticello (an upper jaw bone from a mastodon remains on display at Monticello; see here). Big Bone Lick gets its name from the large number of natural salt springs, or salt licks, in the area. During the late Pleistocene, these saline springs attracted numerous large mammals, many of which died and were buried there. The fauna includes an extinct horse (Equus complicatus), two giant ground sloths (Megalonyx jeffersonii and Paramylodon harlani), mammoths (Mammuthus sp.), mastodons (Mammut americanum), and caribou (Rangifer tarandus). Radiocarbon dating shows that the age of the bones at Big Bone Lick are between 11,000 and 12,300 years old.