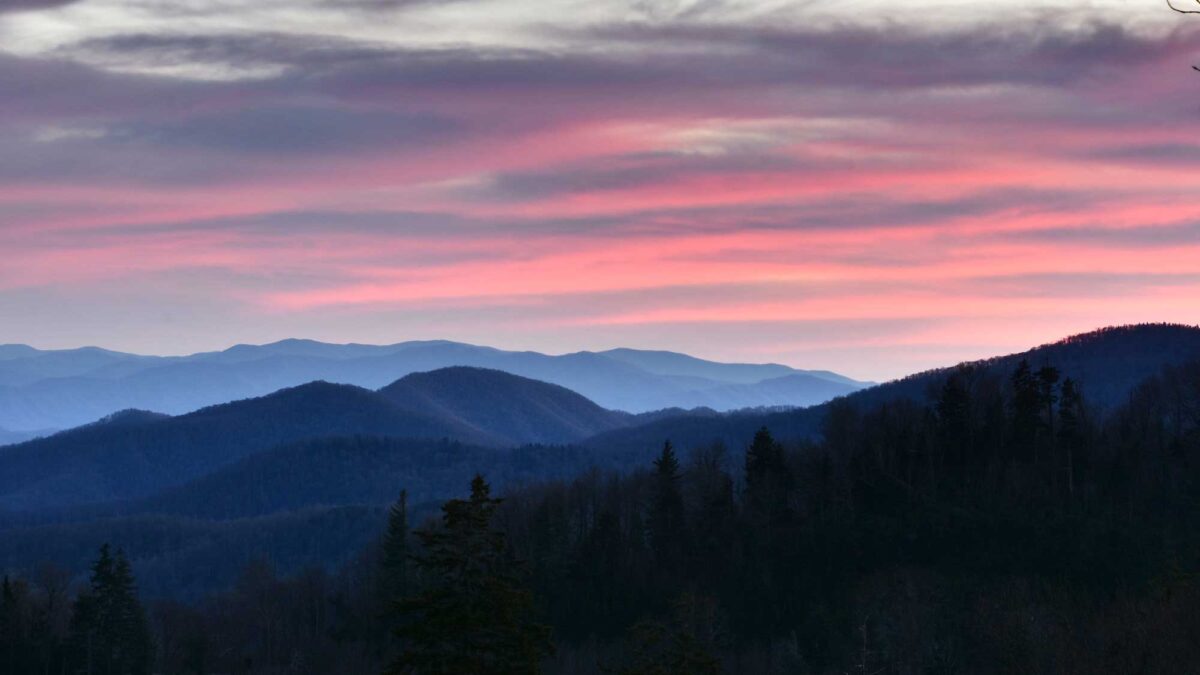 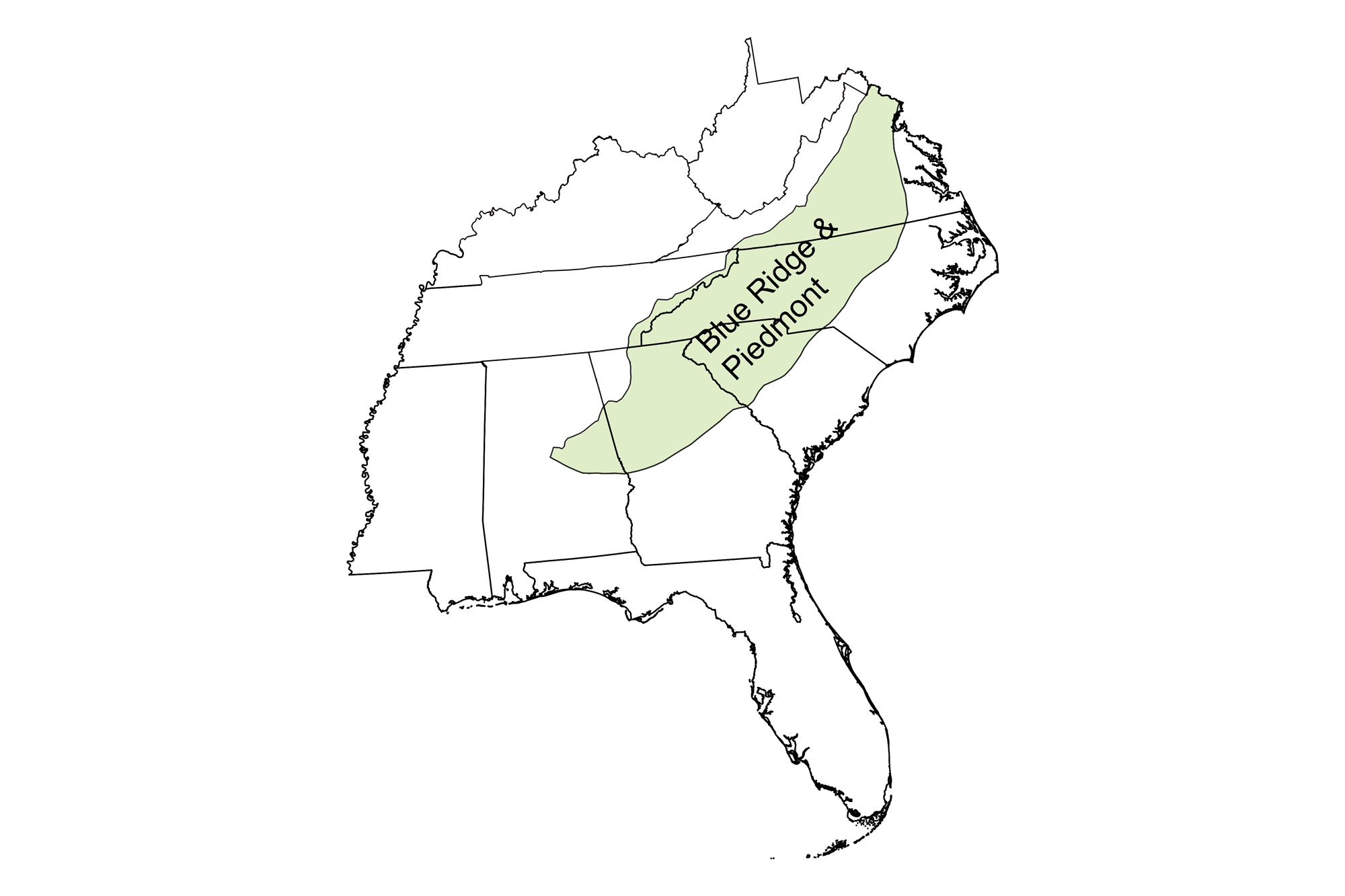 Snapshot: Overview of the topography and major landforms of the Blue Ridge and Piedmont regions of the southeastern United States.

Topics covered on this page: Introduction, The Blue Ridge, The Piedmont.

Credits: Most of the text of this page is derived from "Topography of the Southeastern US" by Michael A. Gibson and Andrielle Swaby, chapter 4 in The Teacher-Friendly Guide to the Earth Science of the Southeastern U.S., 2nd ed., edited by Andrielle N. Swaby, Mark D. Lucas, and Robert M. Ross (published in 2016 by the Paleontological Research Institution; currently out of print). The book was adapted for the web by Elizabeth J. Hermsen and Jonathan R. Hendricks in 2021–2022. Changes include formatting and revisions to the text and images. Credits for individual images are given in figure captions. 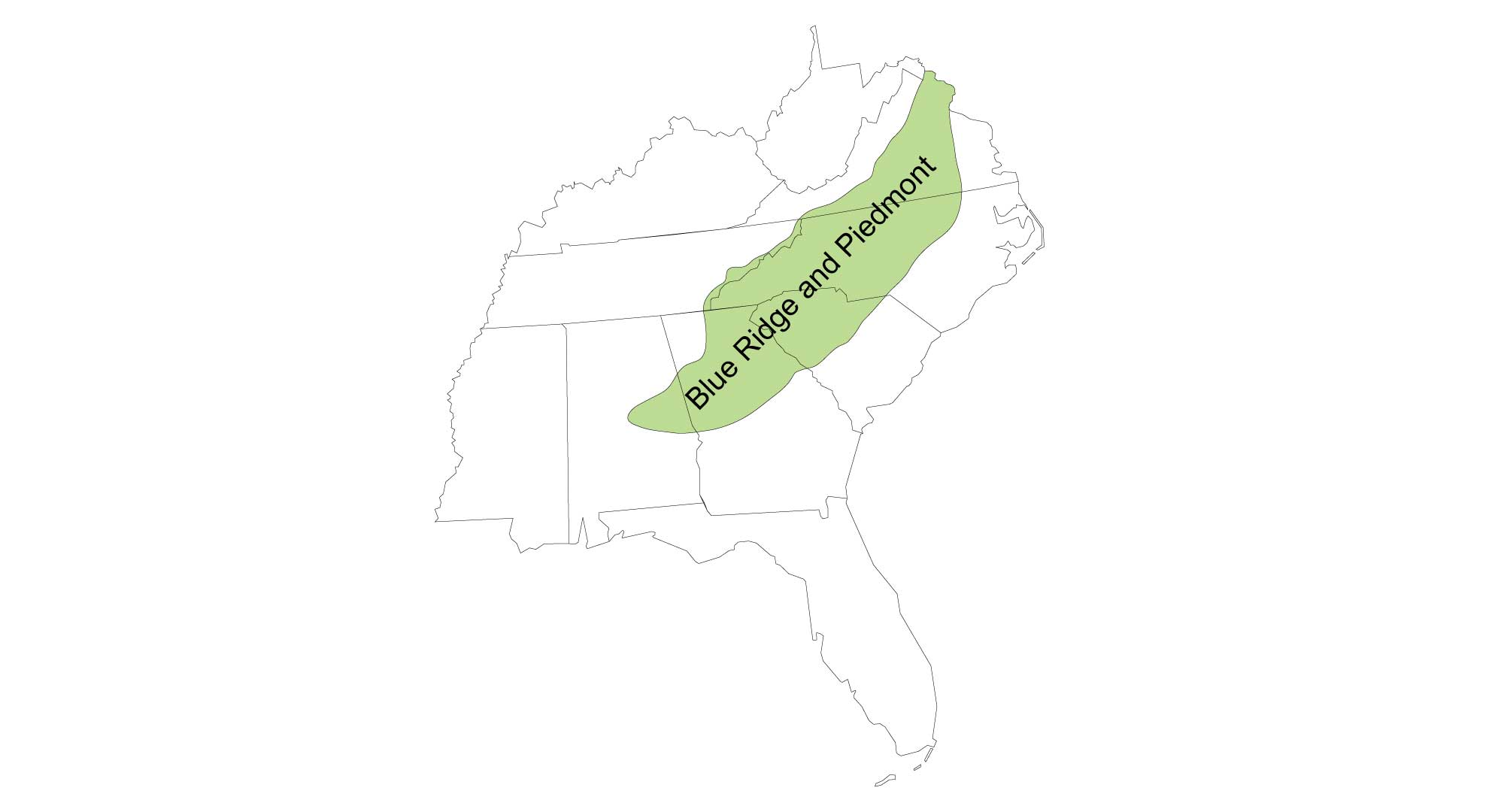 The Blue Ridge and Piedmont represents a highly eroded ancient core of mountain building found along the spine of the Appalachians. The boundary between the Blue Ridge and Piedmont provinces is often considered to be the Brevard Fault Zone, a 600-kilometer-long (370-milelong) zone stretching from Alabama to Virginia, where the rocks were crushed and ground by the tremendous pressure of thrusting during the formation of Pangaea. 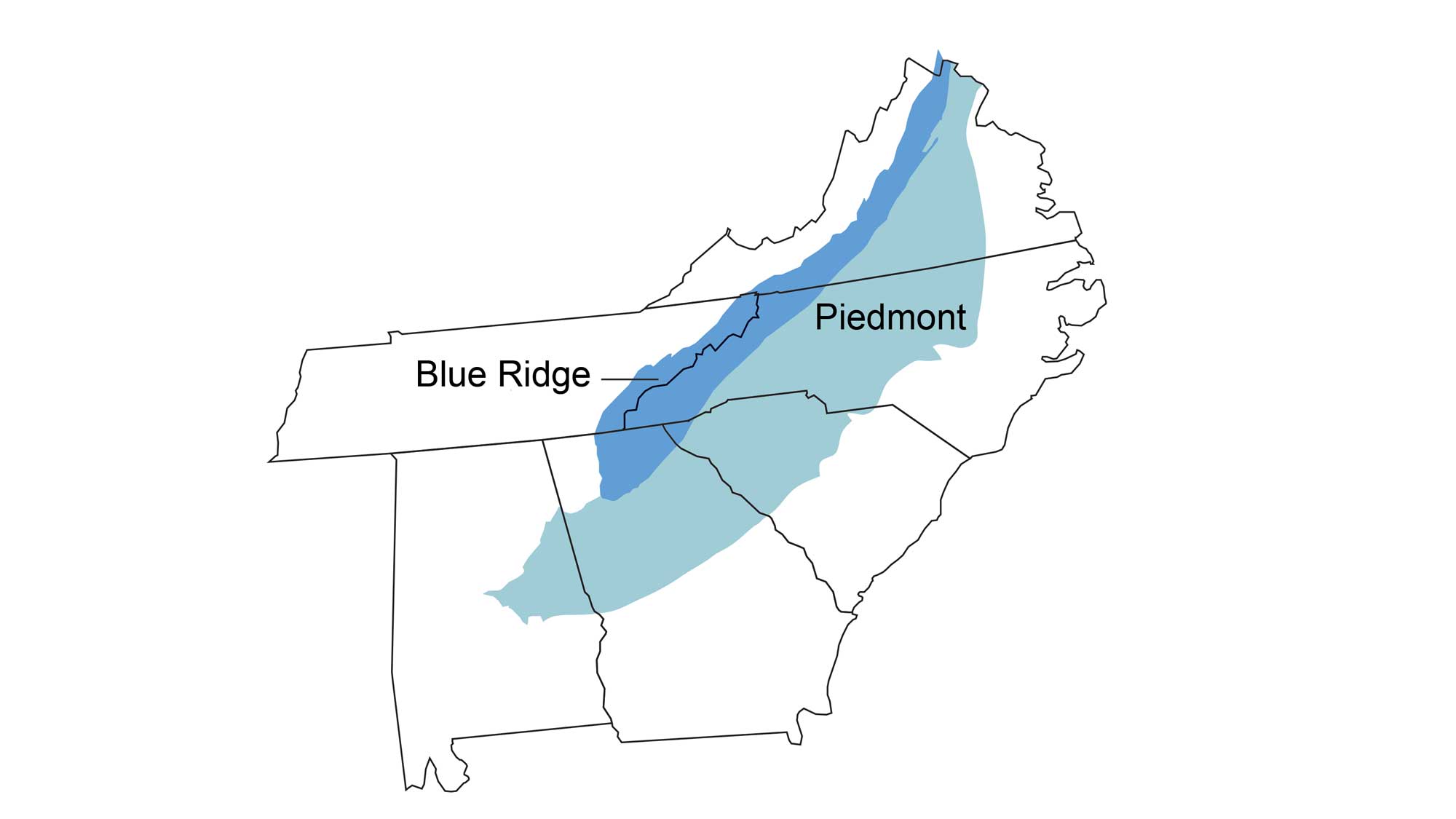 Physiographic divisions of the Blue Ridge and Piedmont. Map by Andrielle Sawby; modified for the [email protected] project.

Unlike the Southeast's other regions, which are dominated by sedimentary rocks, the Blue Ridge and Piedmont is underlain by crystalline metamorphic rock with localized igneous occurrences, including the remains of ancient volcanoes. Even though these mountains are highly eroded today, they can still top 1500 meters (4900 feet) in elevation. For example, Mount Rogers, an extinct volcano in Virginia, rises 1746 meters (5728 feet) above sea level. 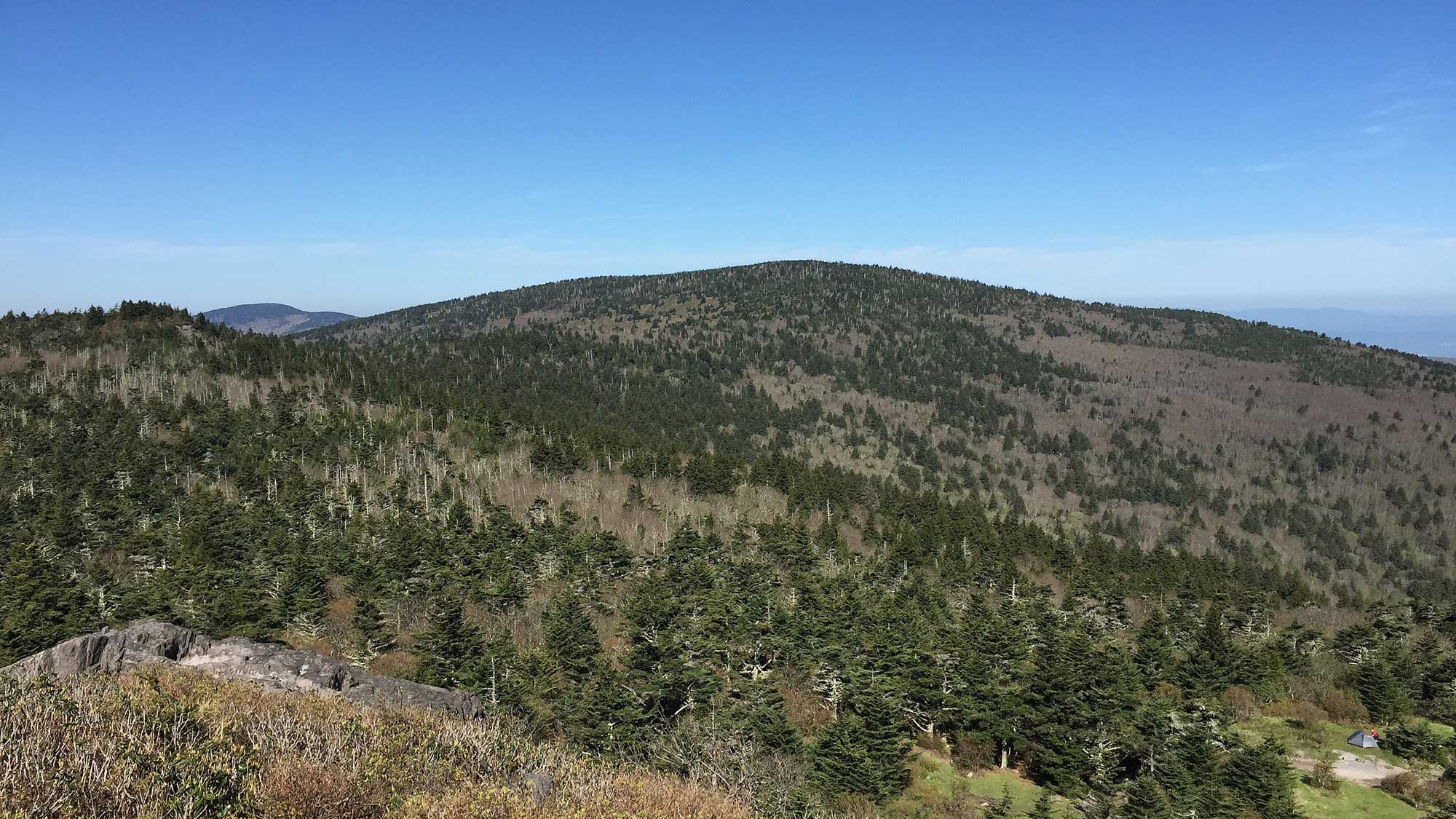 The elevated Blue Ridge formed from the compressive collision forces of several mountain-building episodes during the Paleozoic—essentially a block thrust northwest over the buried leading edge of the Valley and Ridge (directly west of the Blue Ridge). The boundary between the Valley and Ridge and Blue Ridge, the Great Appalachian Valley, is a major landform feature that stretches 1900 kilometers (1200 miles) from Quebec to Alabama. 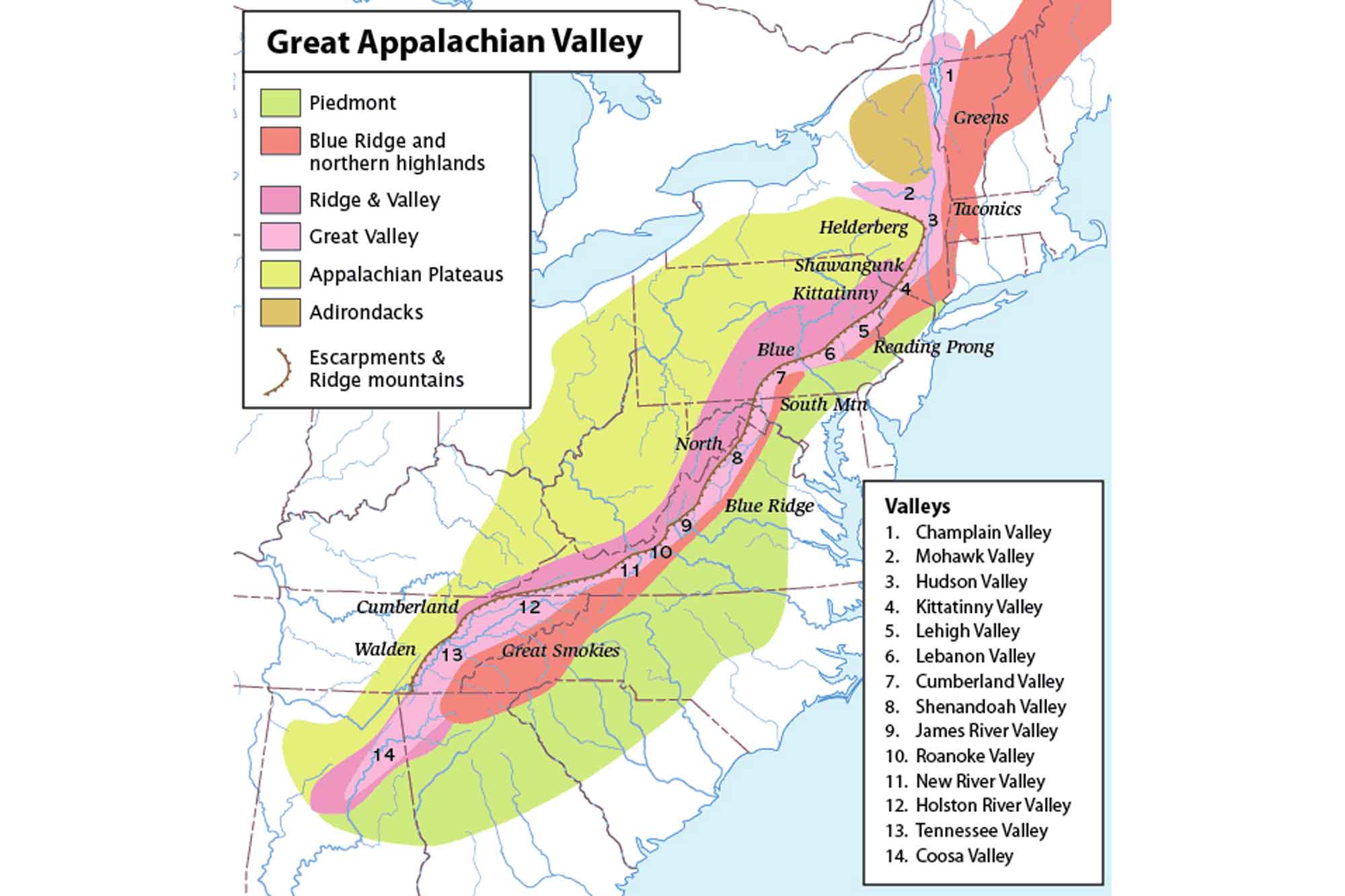 This gigantic trough, or chain of valley lowlands, reflects the late Paleozoic suturing of Pangaea. During this event, overthrusting juxtaposed contrasting lithologies, which have now been accentuated by subsequent erosion to produce the sharp boundary we use to divide the two physiographic regions. During glaciation in the Pleistocene, the Blue Ridge was also under the influence of periglacial processes, which further sculpted these landforms and influenced regional ecosystems.

The tectonic forces that built the Blue Ridge uplifted the oldest rocks in the Southeast (dating back to the Mesoproterozoic) and exposures older than 1.2 billion years old are common here. The region was pushed over 160 kilometers (100 miles) west, telescoping into a series of folded, thrusted crustal sheets that carried older rocks atop younger rocks, overturning the stratigraphic sequence. 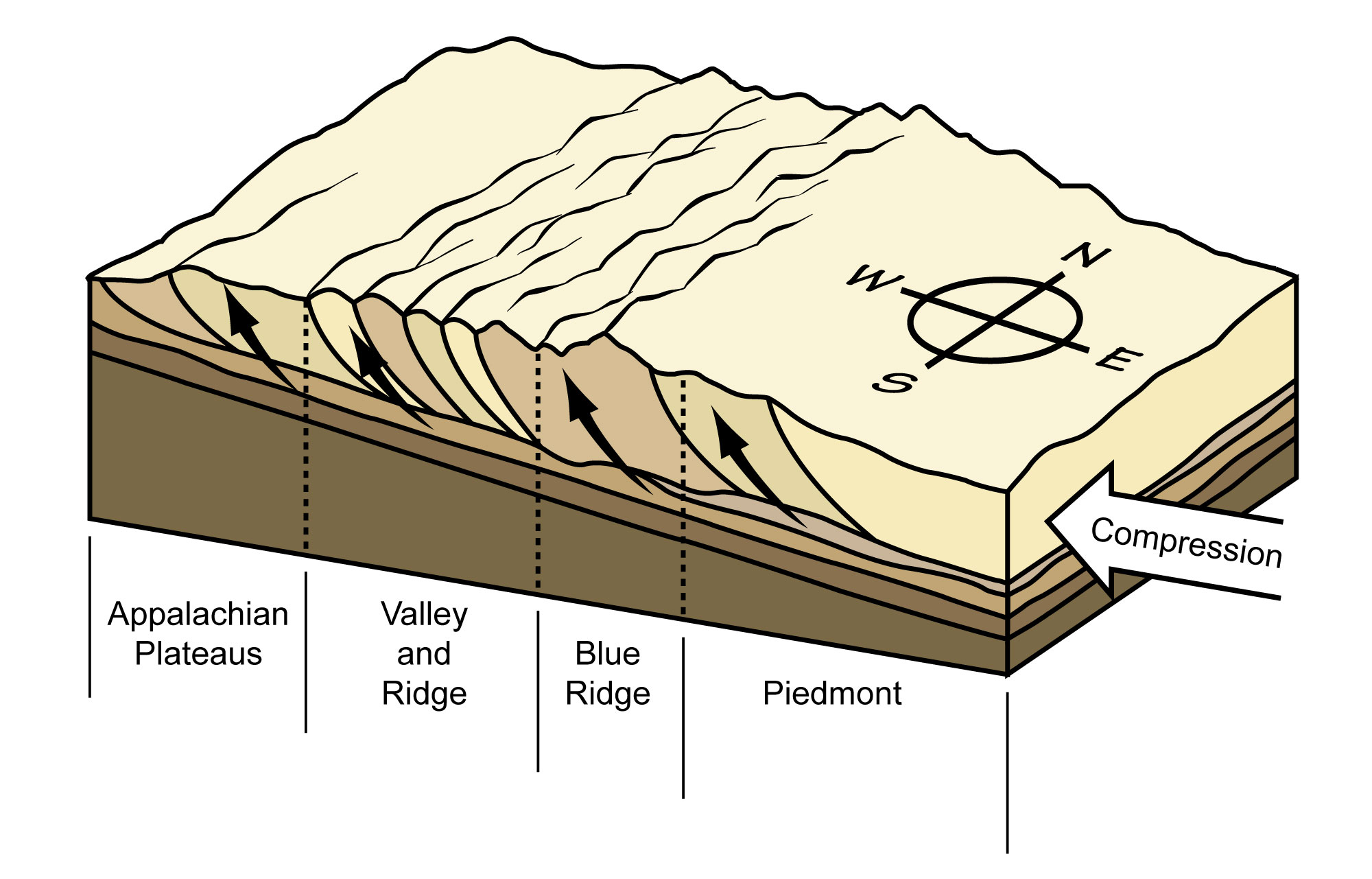 The crust of the Blue Ridge and Piedmont was "telescoped" by the compressional forces of Paleozoic mountain building. Slices of crust were thrust over top of each other, stacking like a deck of cards. Image by Jim Houghton; modified for the [email protected] project. 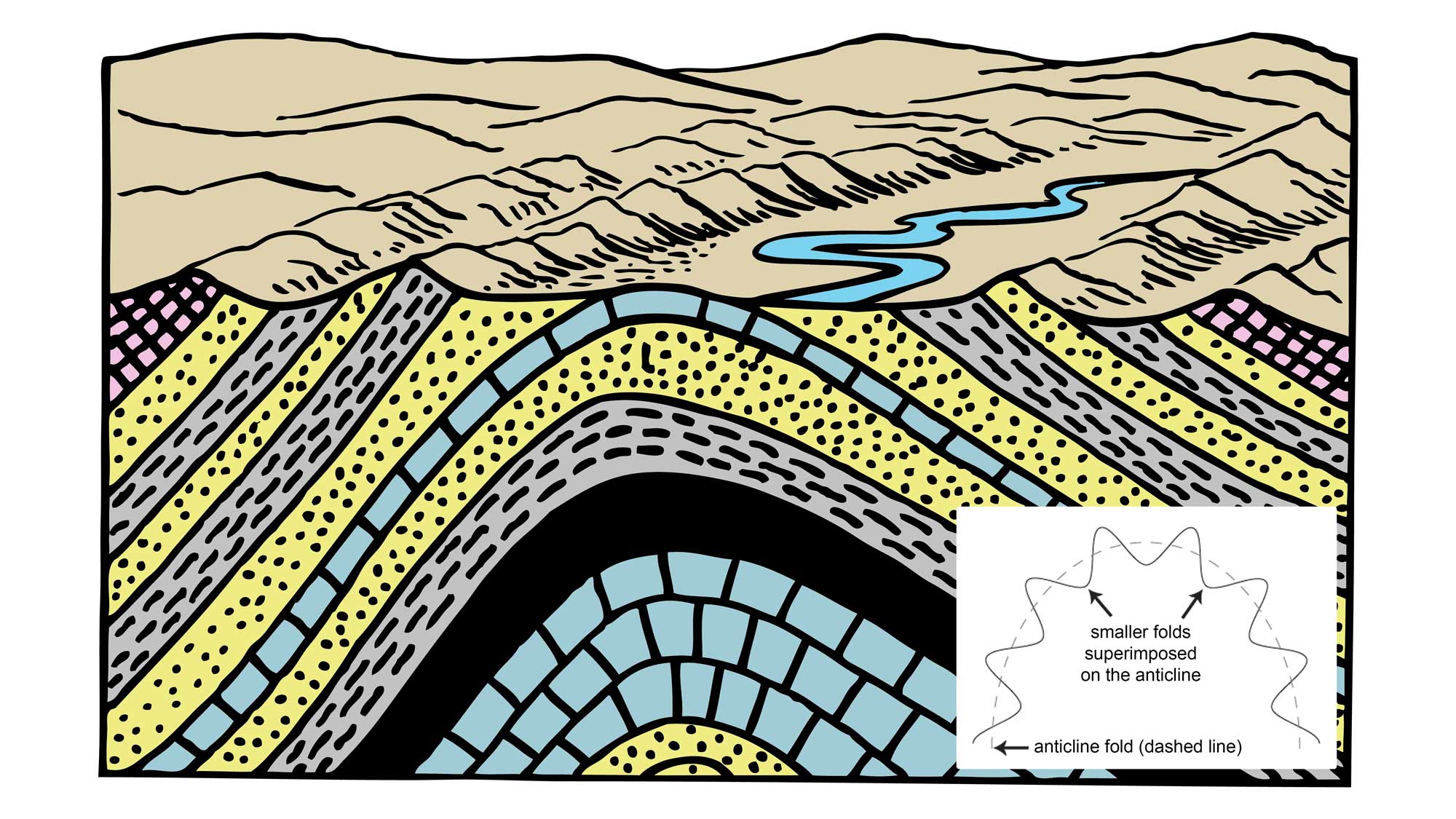 The Eastern Continental Divide runs along the crest of the eastern Blue Ridge, and separates the North American watersheds that flow east into the Atlantic Ocean from those that flow west and south toward the Gulf of Mexico.

The Black Mountains and Mount Mitchell

The Black Mountains, a part of the Blue Ridge in western North Carolina, are the highest mountains in the eastern United States, and their southern tip intersects the Eastern Continental Divide. The tallest individual mountain in this chain is Mount Mitchell, which has an elevation of 6,684 ft.

Heat generated by mountain building transformed the area's original sedimentary rock into the metamorphic rocks of the Blue Ridge Mountains, and it also allowed igneous intrusions to punch their way up through the crust. In Virginia's Shenandoah Mountains, many of the highest peaks are capped by greenstones—metamorphosed basalt flows that spilled out of the Earth during a rifting event about 570 million years ago. Over several million years, these lava flows spread out over the landscape, blanketing over 6000 square kilometers (4000 square miles) with basalt ranging from 6 meters (20 feet) to over 30 meters (100 feet) thick. Although these flows were metamorphosed into greenstone during the formation of the Appalachian Mountains, the original shape of the layers remains and has a noticeable effect on the landscape. Flat "benches" separate jagged cliffs and create stair-stepped textures, while other areas are broad and flat. 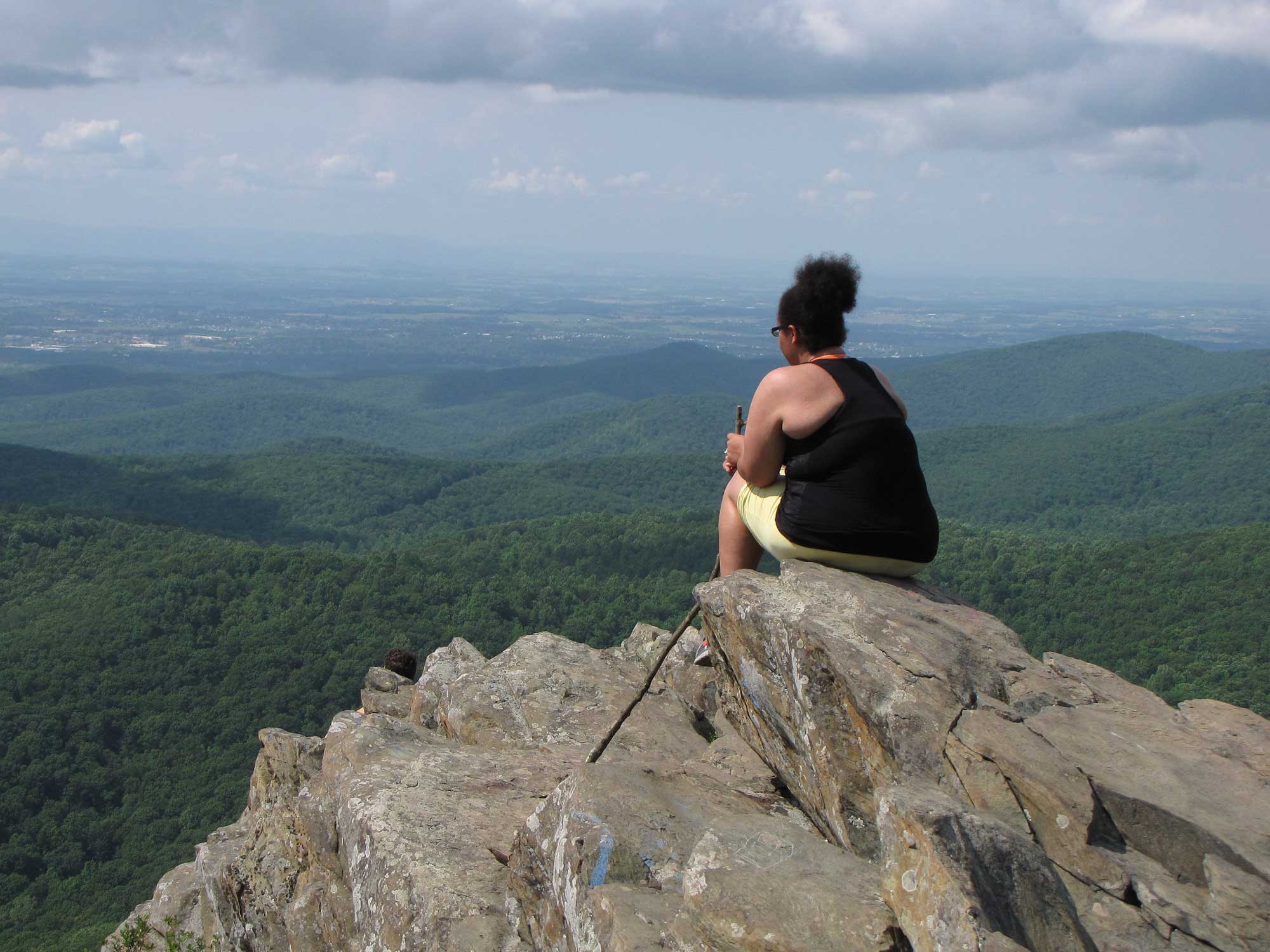 Humpback Rock, a greenstone outcropping near the top of Humpback Mountain, Virginia. The woman in the photograph is looking out at the Shenandoah Valley. Photograph by Ben Schumin (Flickr; Creative Commons Attribution-ShareAlike 2.0 Generic license; image resized).

The Great Smoky Mountains, along the border of Tennessee and North Carolina, encompass a rugged terrain containing 16 peaks with elevations over 1800 meters (6000 feet)—the highest elevations in the Southeast. The major peaks (Clingmans Dome is highest at 2025 meters [6644 feet], followed by Mount Guyot and Mount Le Conte) have smaller ridge spurs radiating from their central peaks, forming steep-sided, V-shaped valleys.

The overthrust rocks of the Great Smoky Mountains have been subjected to erosional processes spanning more than 200 million years. Along the Smokies' western leading edge, erosion has cut numerous geologic "windows" (or, fensters) through the older Precambrian rocks that form the overthrust upper sheet, exposing younger Paleozoic rocks within window valleys that are usually referred to as coves.

Cades Cove in Tennessee is a roughly circular window eroded in Precambrian sandstone to expose the Paleozoic limestone beneath. A fault at the bottom completely  encircles the cove. Weathering of the carbonate rocks in this and other similar topographic lows (e.g., Tuckaleechee and Wear coves) exposes karstic limestone and produces rich soils that were used for agricultural purposes by 18th-century settlers. Learn more about karst topography here. 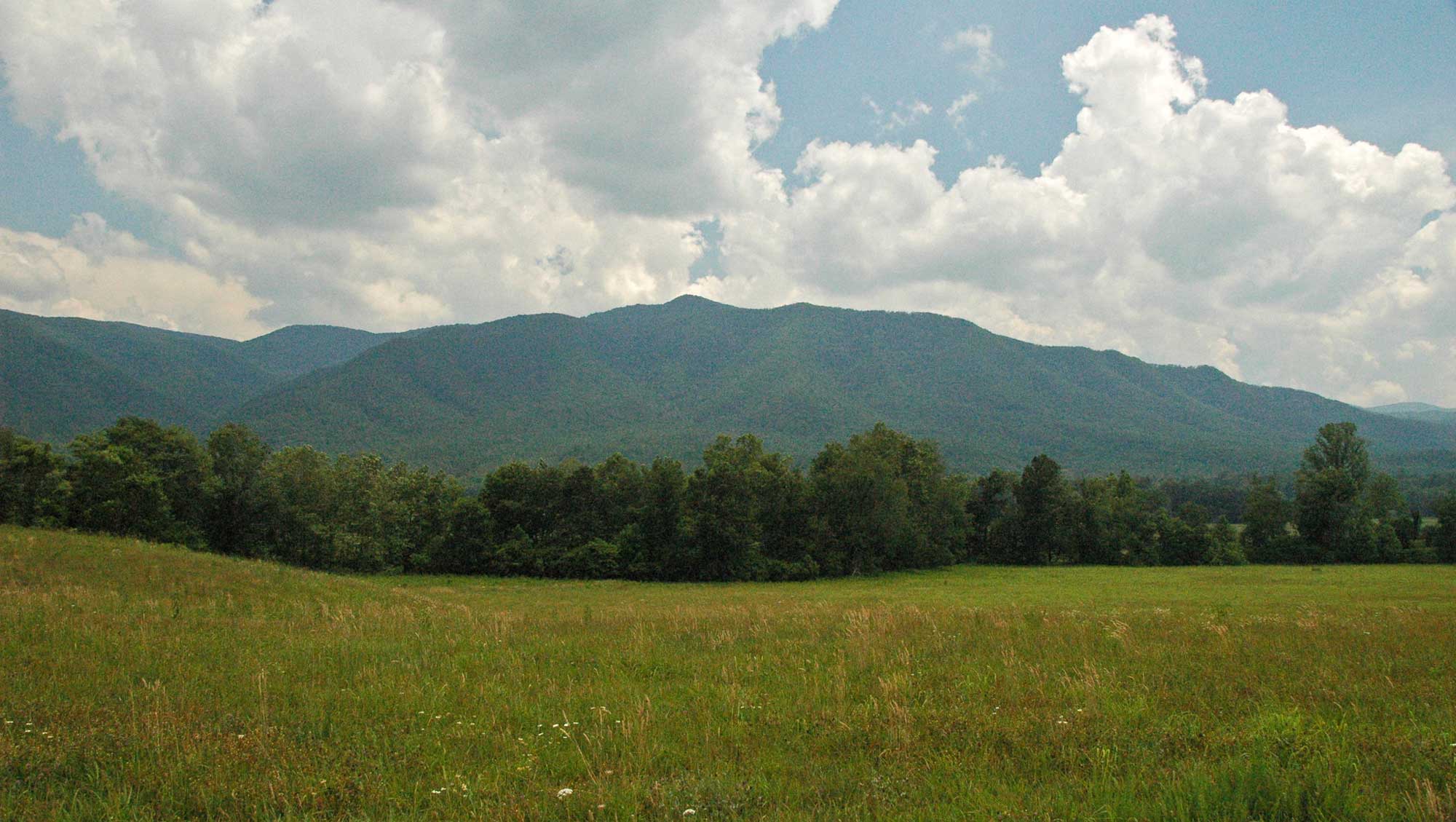 Cades Cove, Tennessee. Portion of original caption by James St. John: "The Great Smoky Mountains along the Tennessee-North Carolina border are dominated by forested mountains and hills. A major exception is the ~flat-floored landscape shown above - this is Cades Cove, which is a tectonic window (also known as a fenster). Erosion has breached the Great Smoky Thrust Fault, resulting in the exposure of non-metamorphosed, Paleozoic sedimentary rocks below the fault (outcrops of Ordovician Jonesboro Limestone are nearby here). The hills and mountains surrounding the fenster in the background are part of the Blue Ridge Physiographic Province. The Blue Ridge in this area has bedrock consisting of Neoproterozoic-aged metasedimentary rocks above the Great Smoky Thrust Fault." Photograph by James St. John (Flickr; Creative Commons Attribution 2.0 Generic license).

Dissolution of the limestone has led to the formation of several caves—Bull Cave in Cades Cove, 281 meters (924 feet) deep, is the deepest cave in Tennessee. Tuckaleechee Caverns, a mile-long cave system near Townsend, Tennessee that reaches depths of 46 meters (150 feet), is another karstic cave estimated to be between 20 and 30 million years old. 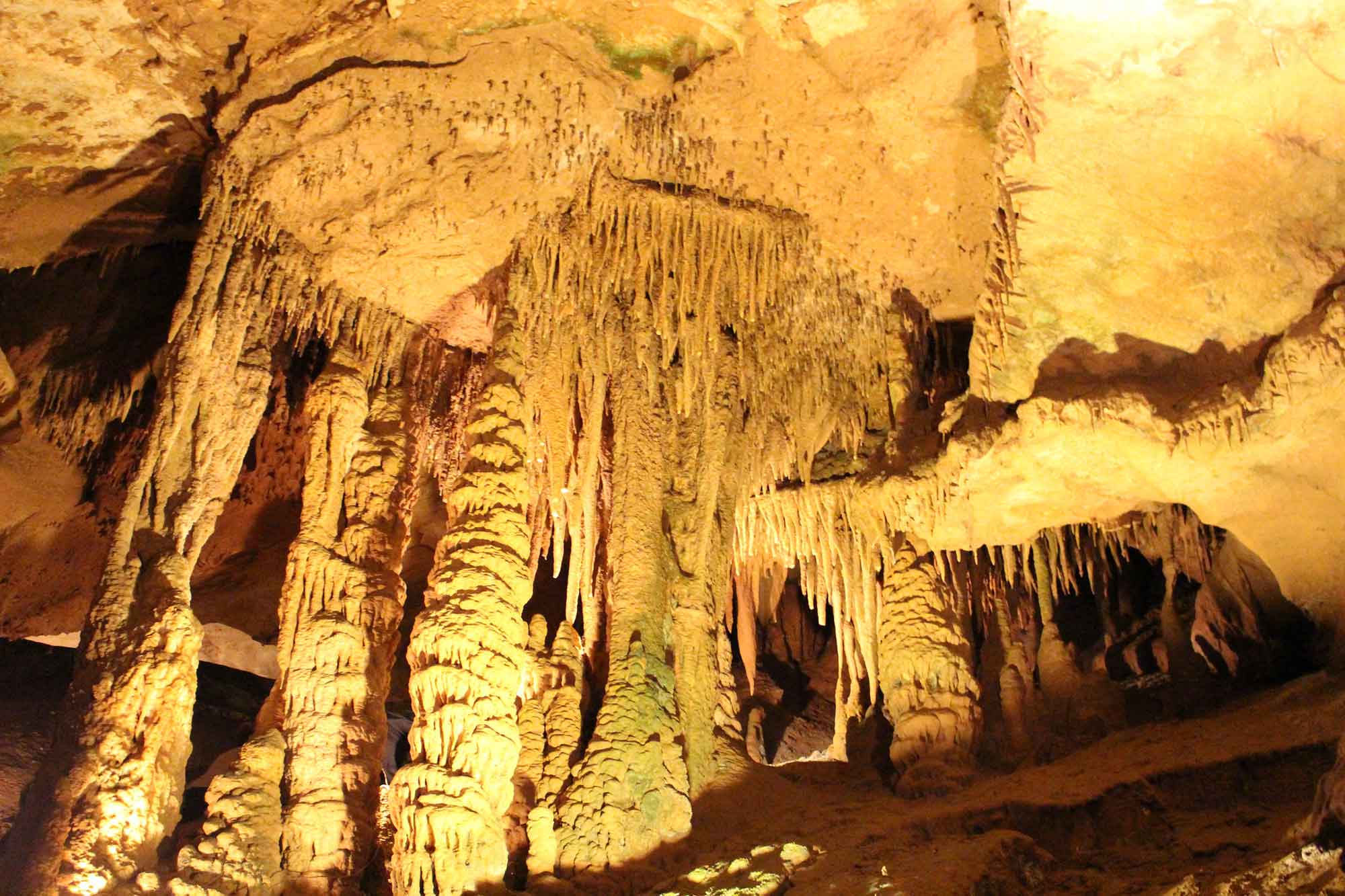 In northwestern North Carolina, several smaller ranges are isolated from the main body of the Blue Ridge Mountains. The Brushy Mountains are separated from the Blue Ridge Mountains by the Yadkin River Valley and divide the waters of the Yadkin and Catawba rivers. The Sauratown Mountains, located within Stokes and Surry counties, rise sharply 240 to 520 meters (800 to 1700 feet) above the surrounding landscape and are known for some of the best rock climbing in the state. The range is home to many prominent peaks, including Pilot Mountain, an isolated erosional remnant of metamorphic quartzite. 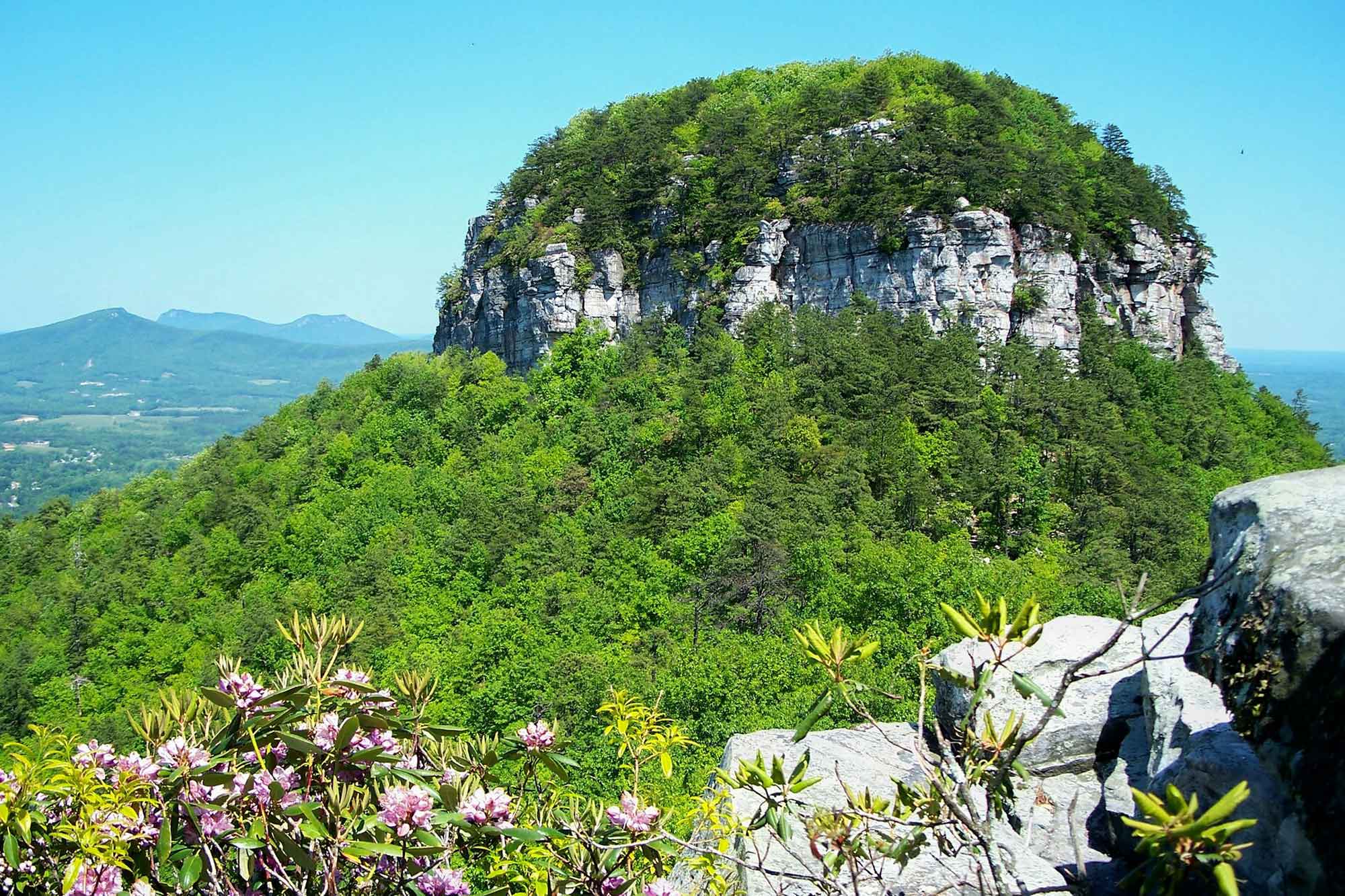 East of the Blue Ridge mountain belt lies the upland Piedmont region. Here, a more humid climate has resulted in extensive weathering of the Piedmont's overthrusted rocks, producing a more subdued topography of low rolling hills. Elevations can reach several hundred meters (particularly in Alabama's northern Piedmont, which contains the highest peaks in the state), and the entire Piedmont gently slopes toward the east, draining toward the Atlantic Ocean. The near surface of the Piedmont is composed of saprolite, the clay-rich remains of decomposed rock that produces a rich soil for farming. 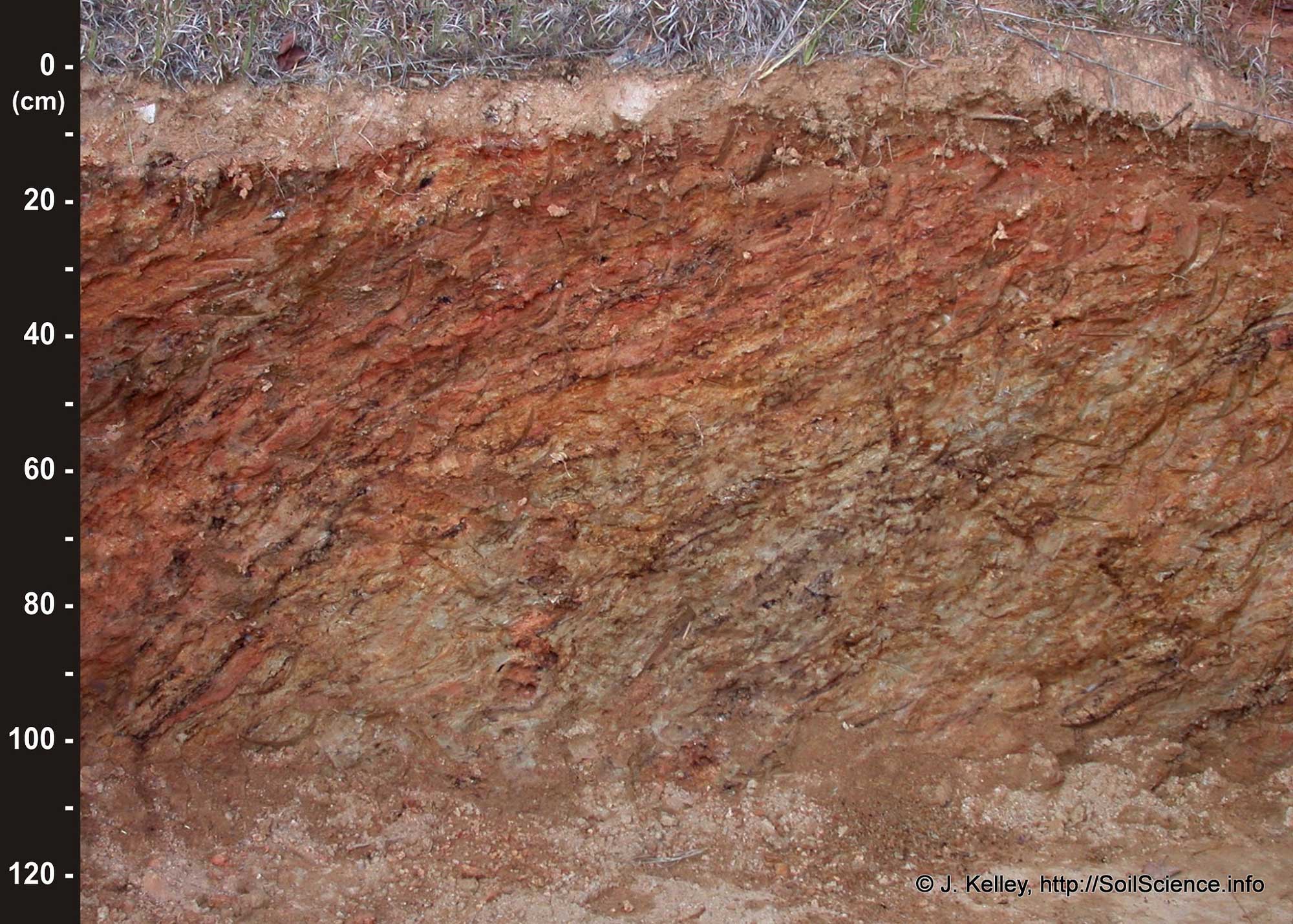 Sporadically peeking up through this blanket of weathered metamorphics are erosional remnants called monadnocks—resistant rocks that contrast with their surroundings in terms of topography and composition. In Georgia, an igneous pluton conspicuously rises 514 meters (1686 feet) above the surrounding landscape to form Stone Mountain, a massive granite dome that covers 236 hectares (583 acres) and has a physical volume of over 210 million cubic meters (7.5 billion cubic feet). 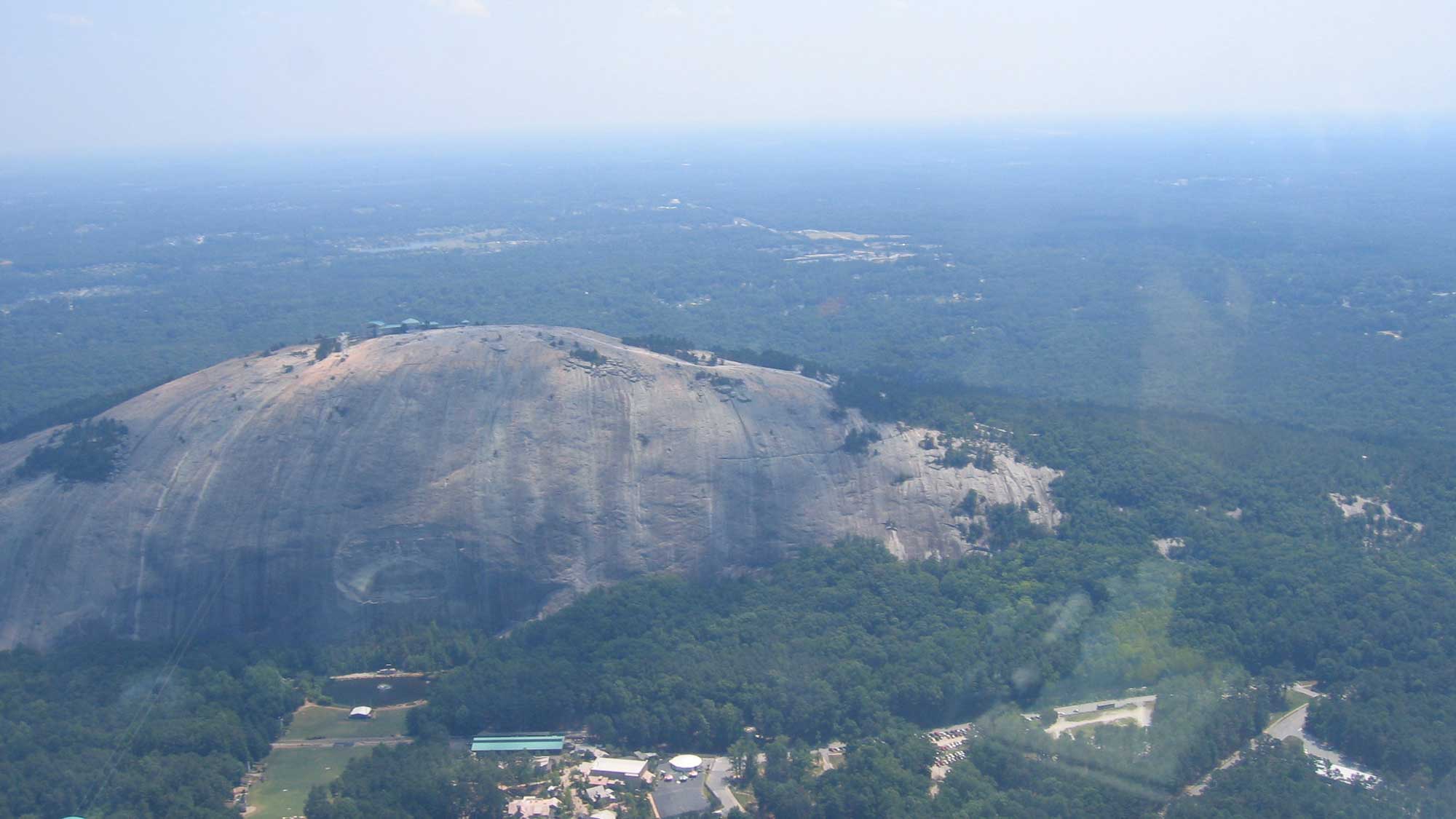 Despite its size, the mountain occupies only a small portion of the area underlain by the granite, like the tip of an iceberg. All of this granite formed around 300 million years ago, during the Alleghanian Orogeny, when it was intruded into the preexisting rock at a depth of about 12–16 kilometers (8–10 miles) below the surface. The granite was more resistant to weathering than was the surrounding rock, and as the layers of overlying rock slowly eroded away, the granite was finally exposed at the surface about 15 million years ago. There is also a Stone Mountain in North Carolina—another granitic monadnock—that formed at around the same time! Other monadnocks in the Piedmont include Little Mountain and Table Rock in South Carolina, Arabia Mountain in Georgia, and Kings Pinnacle in North Carolina. 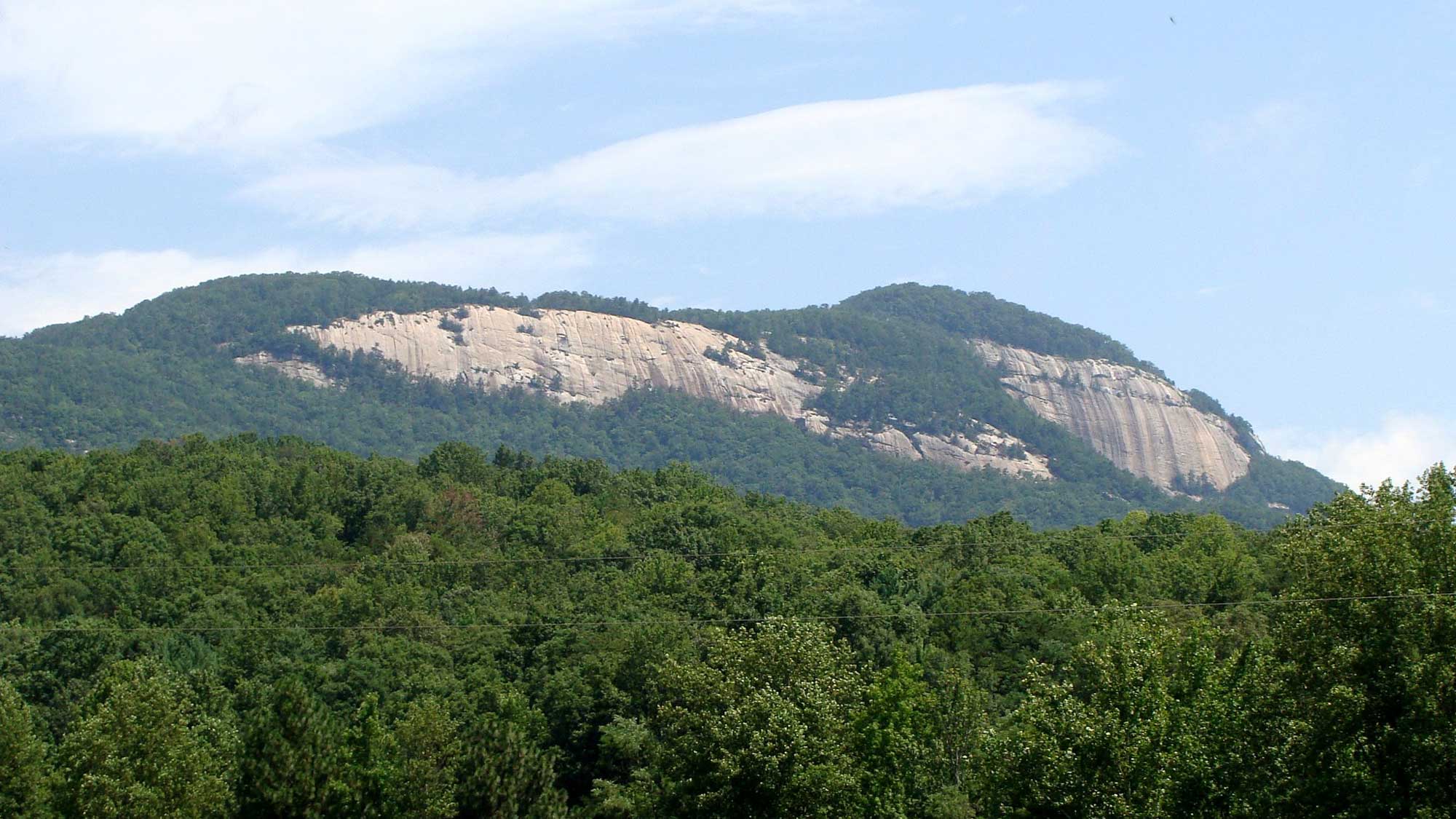 A series of irregular linear basins, collectively referred to as Mesozoic Rift Basins or Triassic Basins (e.g., Dan River-Danville and Culpeper basins in Virginia and Wadesboro Basin in North Carolina), are exposed sporadically within the Piedmont. Topographically, these basins are hard to distinguish from the surrounding and enclosing terrain; however, they tend to have tilted sedimentary strata of sandstone and shale that erode to form low linear ridges on their eastern flanks. Where basalt flows occurred, these rocks are more resistant and form traceable topographic ridges.

At the westernmost edge of the Piedmont, called the Fall Line, the shift from crystalline rocks to loose sediment signals the beginning of the Atlantic Coastal Plain. A fall line (or fall zone) is a geomorphologic break between an upland region of relatively hard crystalline basement rock and a coastal plain of softer sedimentary rock.

The Fall Line, between the Blue Ridge/Piedmont and Coastal Plain regions. Image modified from original by Jim Houghton. 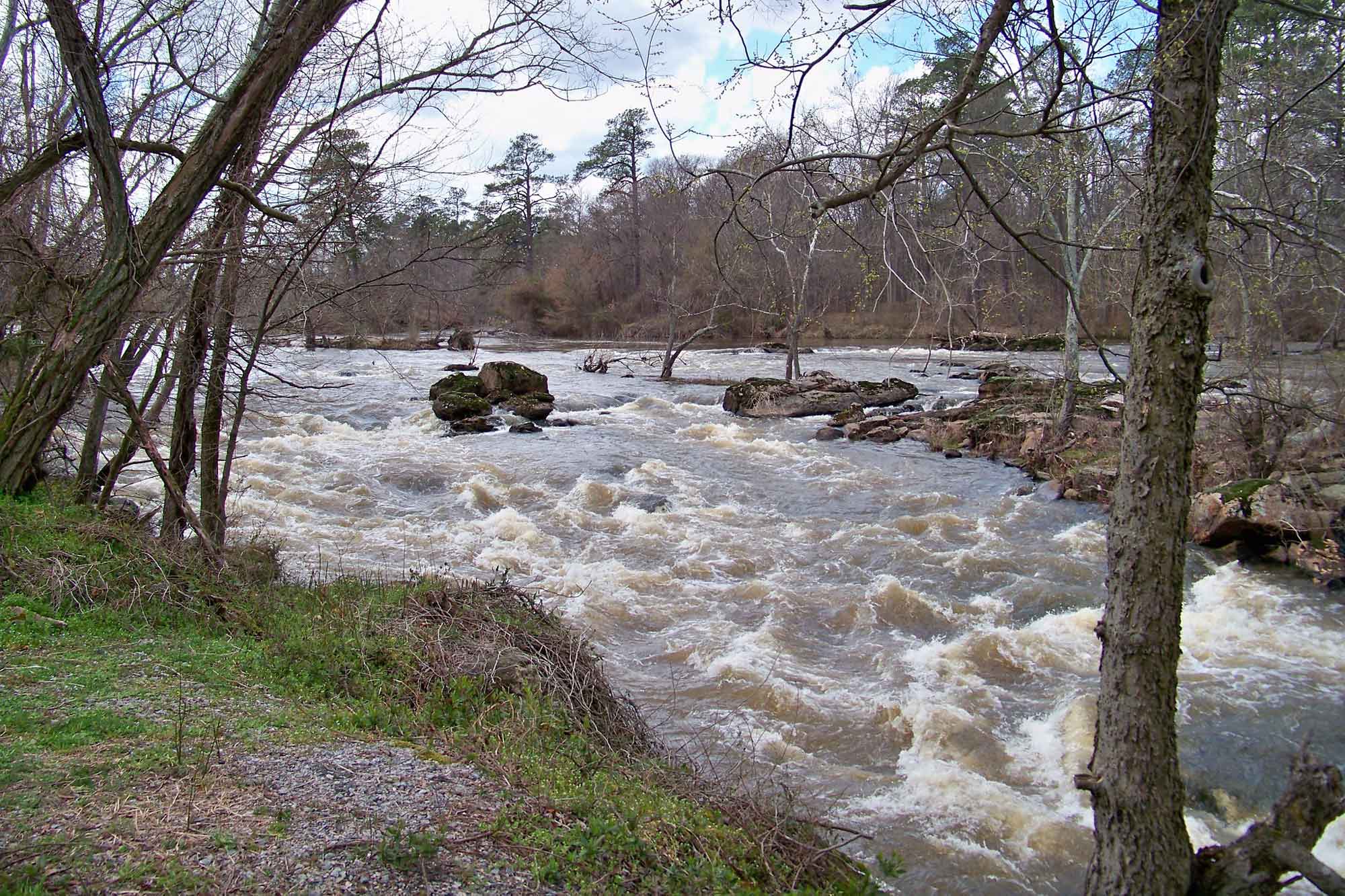