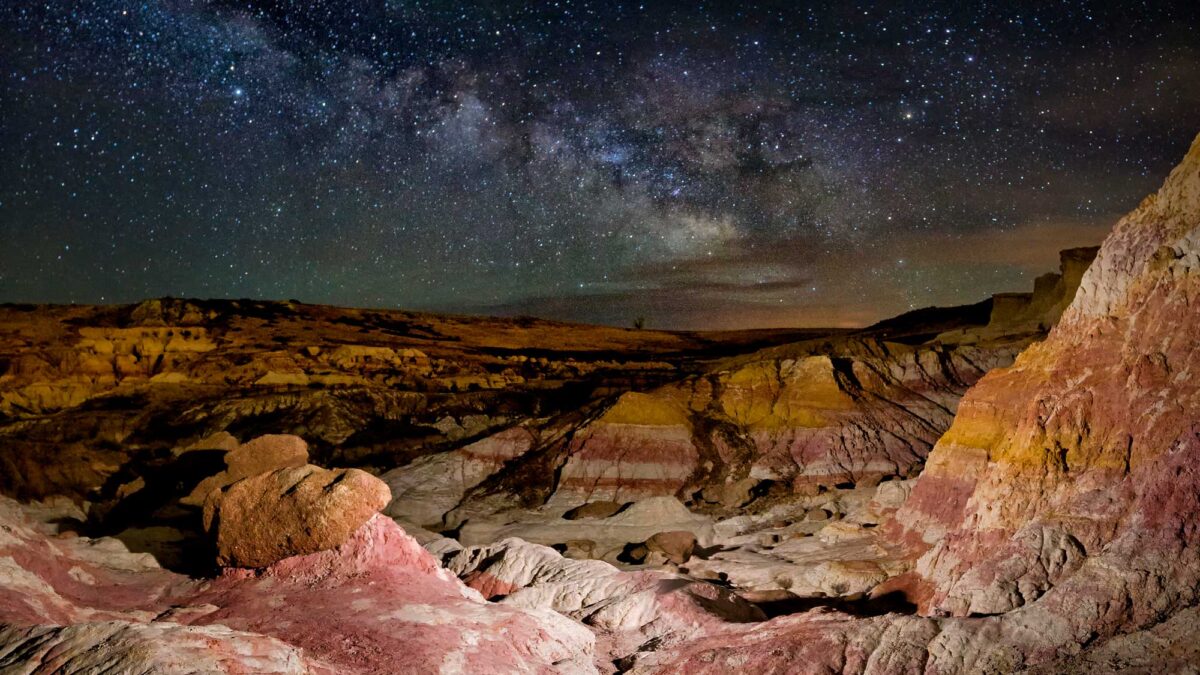 Spotlight: Overview of the rocks of the Great Plains region of the southwestern United States, including Colorado and New Mexico. 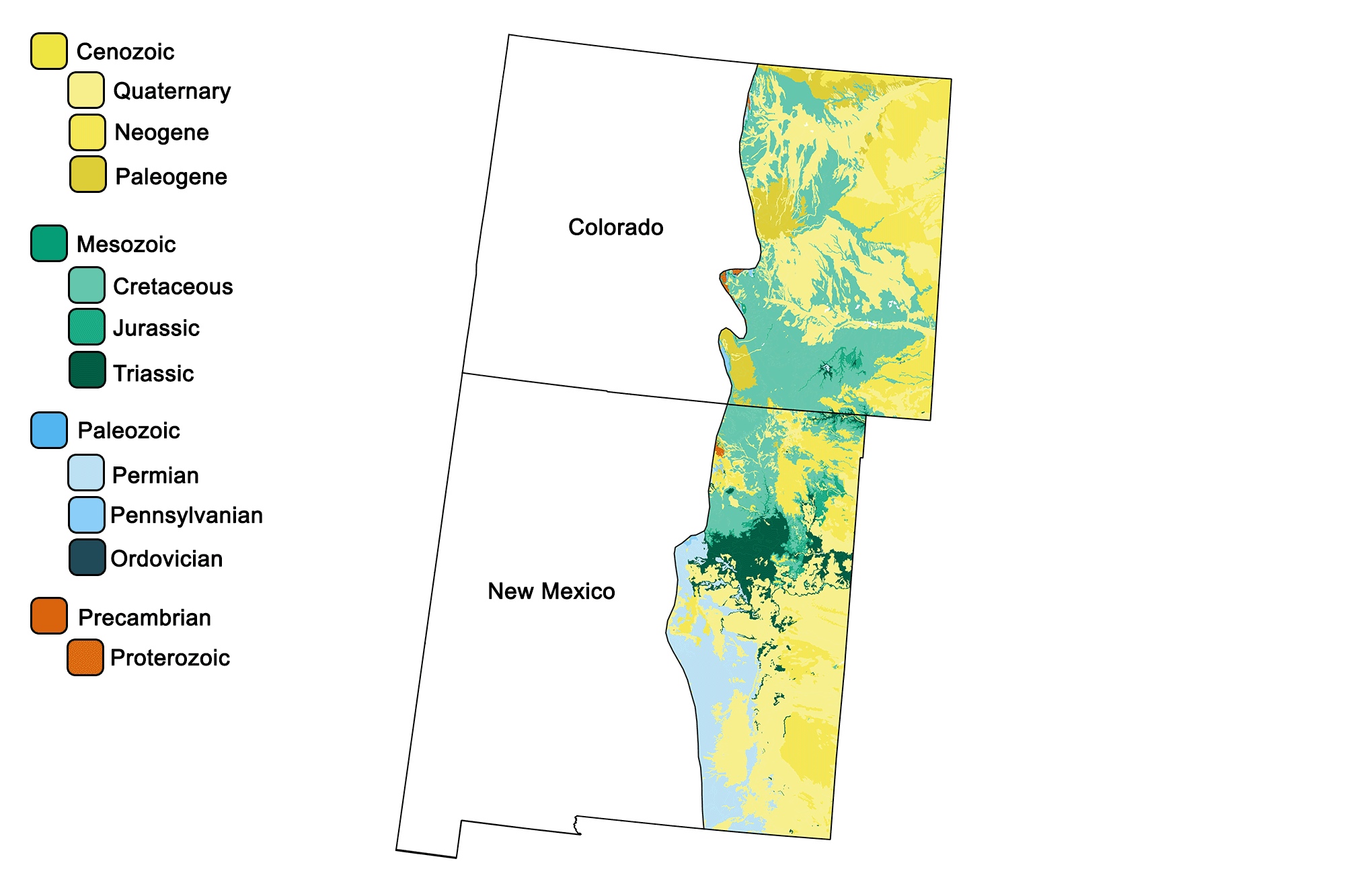 Only the western margin of the Great Plains lies within the Southwestern US, along the eastern border of Colorado and New Mexico. The region’s geologic history is chiefly one of sedimentary deposition driven first by marine environments and, more recently, by terrestrial deposition from the erosion of the Rocky Mountains to the west. In general, rocks found at the surface of the Great Plains are young sediments (predominantly Cenozoic with some Cretaceous). Erosional processes along the Platte and Arkansas rivers in Colorado, and the Canadian and Pecos rivers in New Mexico, have cut into the gently eastward-sloping land surface. Outcrops on the plains are usually exposed by stream erosion, in dissected terrain, or in quarries.

Throughout much of the Paleozoic Era until the early stages of the Carboniferous, the Great Plains region was submerged in a shallow sea. During the Paleozoic and Mesozoic, thick sequences of rocks were deposited across the region in environments that varied from marine and coastal to lake, stream, and alluvial. Layers of limestone and shale were deposited when shallow seas repeatedly flooded the area, while sandstones accumulated from sandy beaches were left behind as the seas retreated. With the rise of the Rocky Mountains to the west, erosion and Cenozoic-era volcanism produced sediment that was transported and deposited throughout the Great Plains. The resulting rocks are sandstones, shales, limestones, mudstones, conglomerates, and some evaporites, deposited in beds buried beneath the surface of the plains. Although they are not exposed at the surface, many of these buried rocks are well studied from the cores of numerous oil and gas drillholes throughout the region.

The Great Plains overlie the Raton, Denver, and Permian basins, which are down-warped areas that formed due to tectonic compression in the late Paleozoic. During the Permian period, these basins were carbonate marine environments where reefs grew in the shallows. Deposition of marine sandstone, shale, limestone, and then evaporites (salts and related minerals) eventually ceased as sea level dropped, the basins closed, and the remaining seawater evaporated.

The Raton Basin exposes a well-preserved sequence of rock spanning the Cretaceous-Paleogene (K-Pg) boundary. A common characteristic of the K-Pg boundary is the presence of a thin, millimeter-scale layer of clay containing a number of rare earth elements, including iridium. This layer is represented in the basin by a sheet of compact kaolinite clay.

The iridium is thought by most geologists to have come from the impact of a large comet or bolide, which was likely a primary cause of the mass extinction that marks the end of the Cretaceous period.

The Denver Basin contains a 55-million-year-old formation of coarse sandstone and conglomerate called the Dawson Arkose, a collection of fluvial and alluvial sediments eroded from the Rockies and deposited at their base during the late Cretaceous and early Paleogene. The Dawson Arkose is beautifully exposed at the Paint Mines Interpretive Park near Colorado Springs, where pastel hoodoos and badlands topography are eroded into the landscape. 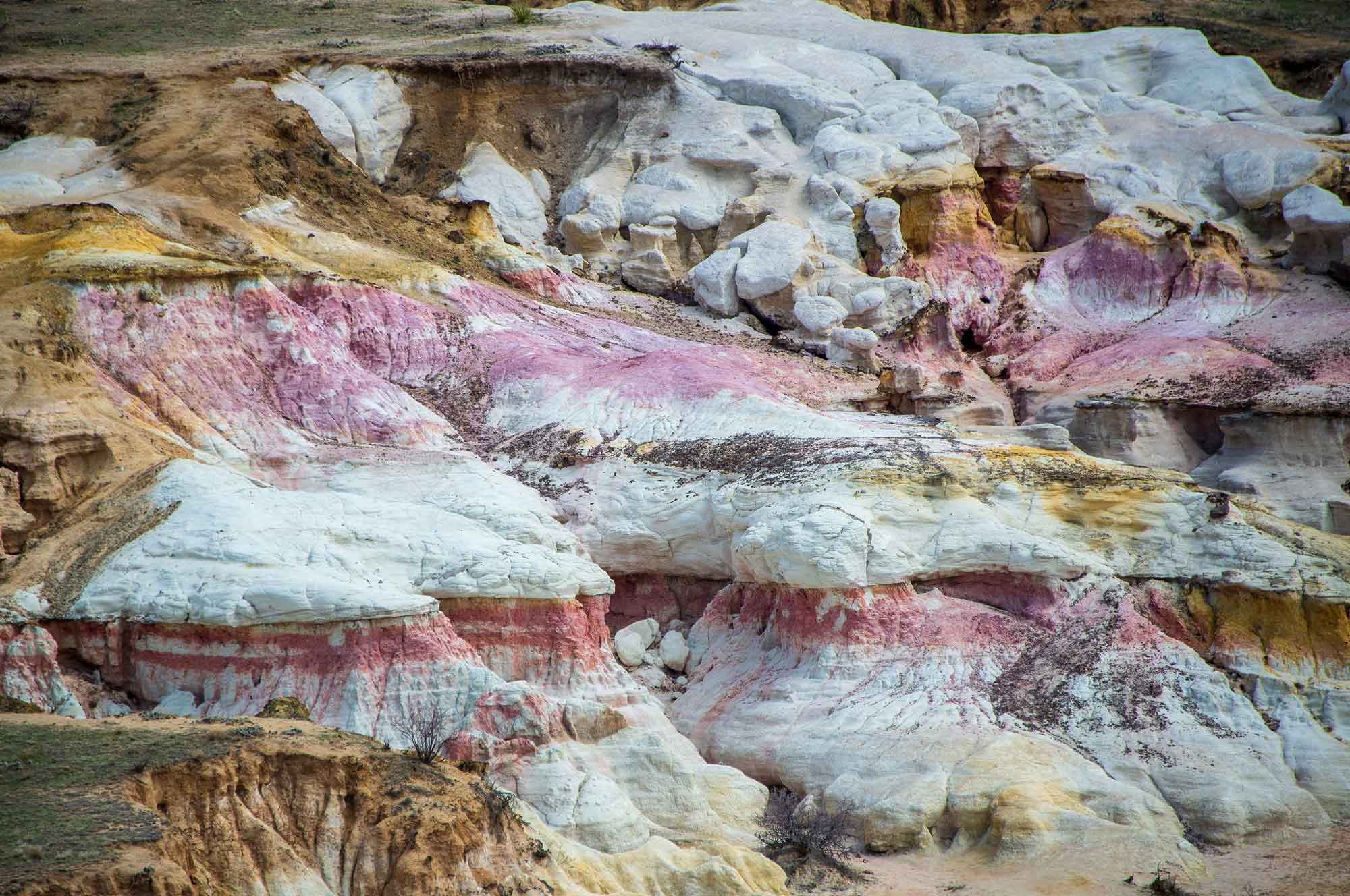 Gravel, sand, and mud dominate the surface of the Great Plains, with progressively younger sediment located farther from the western mountains. Eroded material eventually filled stream valleys and covered hills, creating a massive, gently sloping plain that was in place by five million years ago. Except in river valleys where Mesozoic rocks are exposed, the surface is blanketed by thick soils, caliche, windblown sand and silt, and playa lakes. These sediments overlie the Paleogene sediments of the Ogallala Formation, a unit of unconsolidated sands, gravels, and clays that eroded from the Rockies. The Ogalalla Formation is extremely porous, and, as a result, it acts as an important aquifer for much of the Great Plains.

Volcanic features are less common in the Great Plains, and are generally found along or near the region’s western edge. Castlewood Canyon State Park, near Castle Rock, Colorado, provides evidence for an explosive eruption of rhyolitic ash, which created an ash-flow tuff. This welded rhyolite tuff was formed during a tremendous volcanic eruption during the Eocene, approximately 36 million years ago, which filled the air with superheated ash and rock that solidified as it hit the ground. 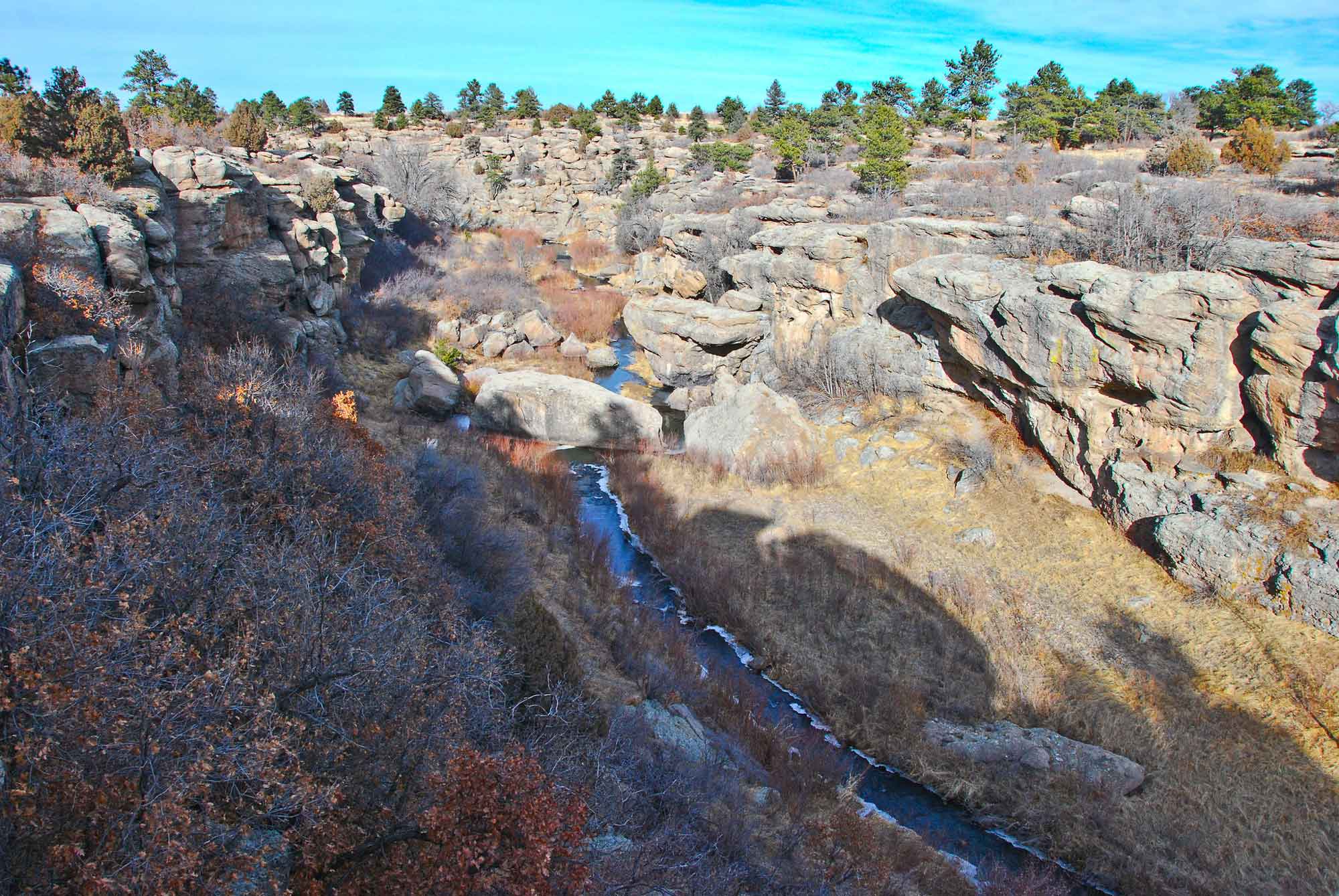 The resulting attractive pink rock has been mined near Castle Rock for use as a decorative stone for over a century; it has been used as a building stone in several Denver buildings, including the historic Trinity Presbyterian Church in downtown Denver, parts of the Capitol Building, and buildings on the University of Denver campus. 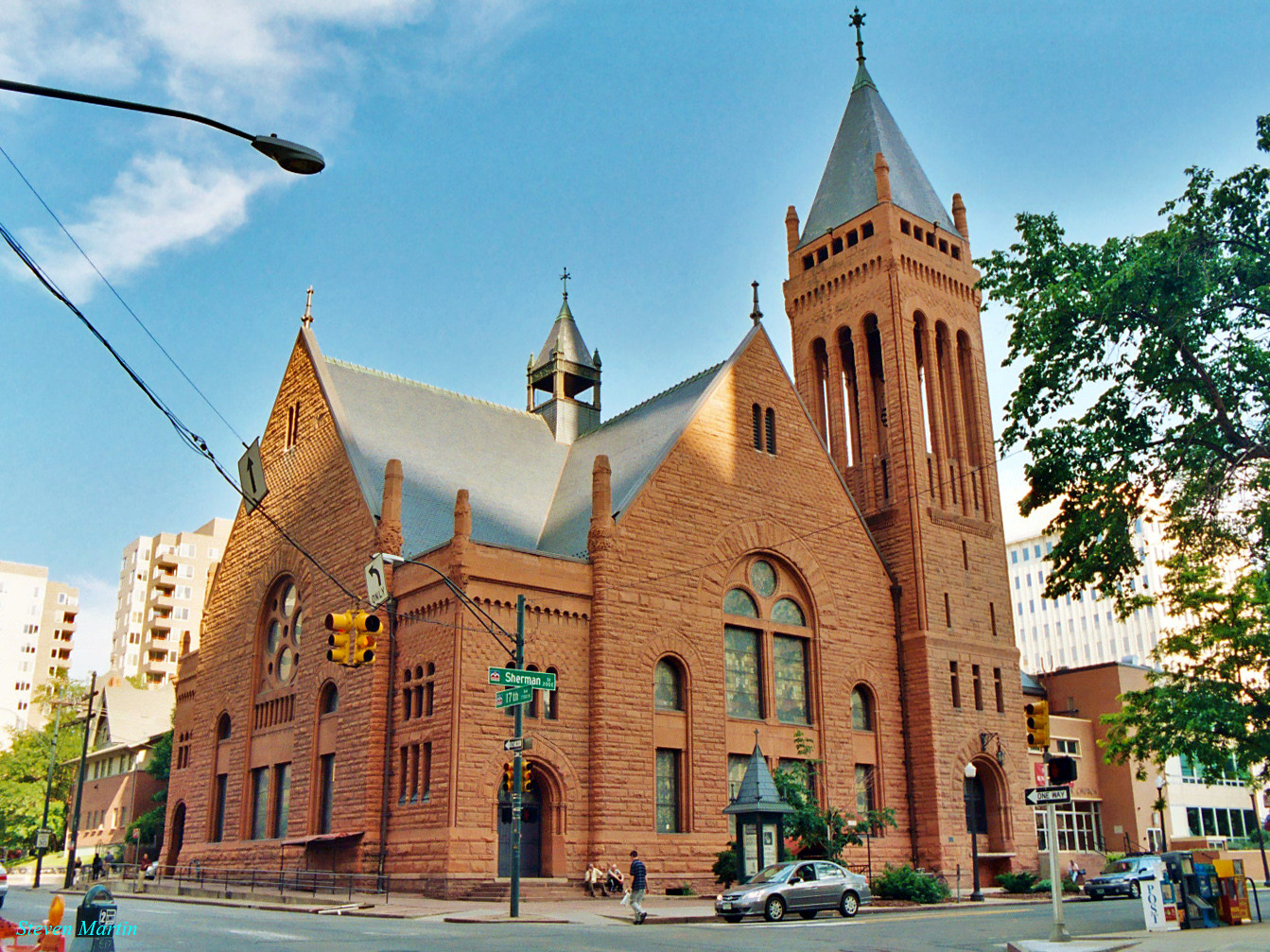 The Spanish Peaks, a 27- to 14-million-year-old igneous intrusion, are located in south-central Colorado near the towns of Walsenburg and Trinidad. The peaks are formed from a varied set of rocks, including granite, granodiorite, syenite, monzonite, and lamprophyre. 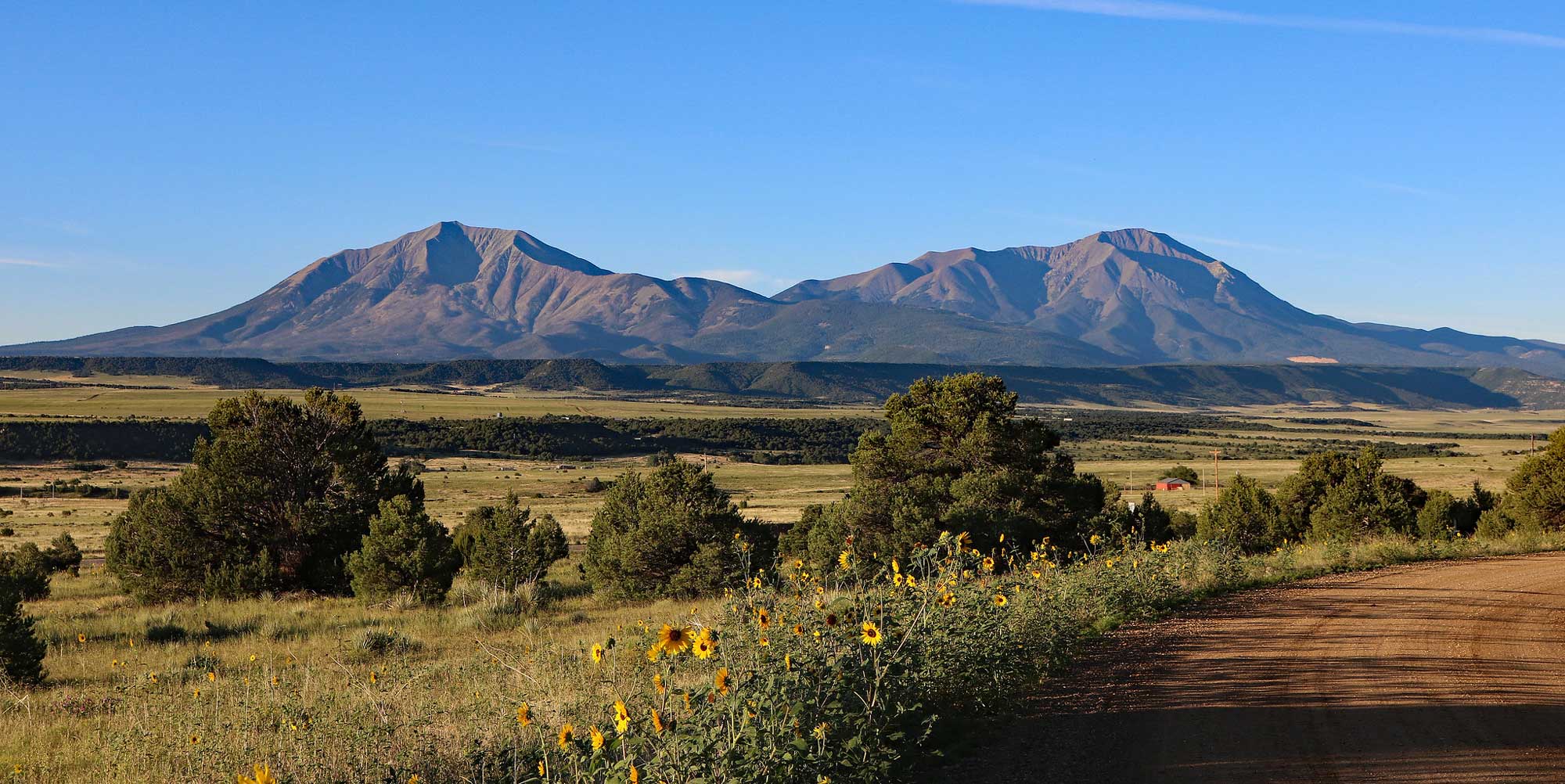 In northeastern New Mexico, the 20,700-square-kilometer (8000-square-mile) Raton-Clayton Volcanic Field contains over 100 recognizable volcanoes, which erupted during the Neogene (likely as a result of crustal extension). For example, Capulin Volcano, an extinct cinder cone that rises steeply from the surrounding grasslands, blanketed the surrounding area with more than 39 square kilometers (15 square miles) of lava. 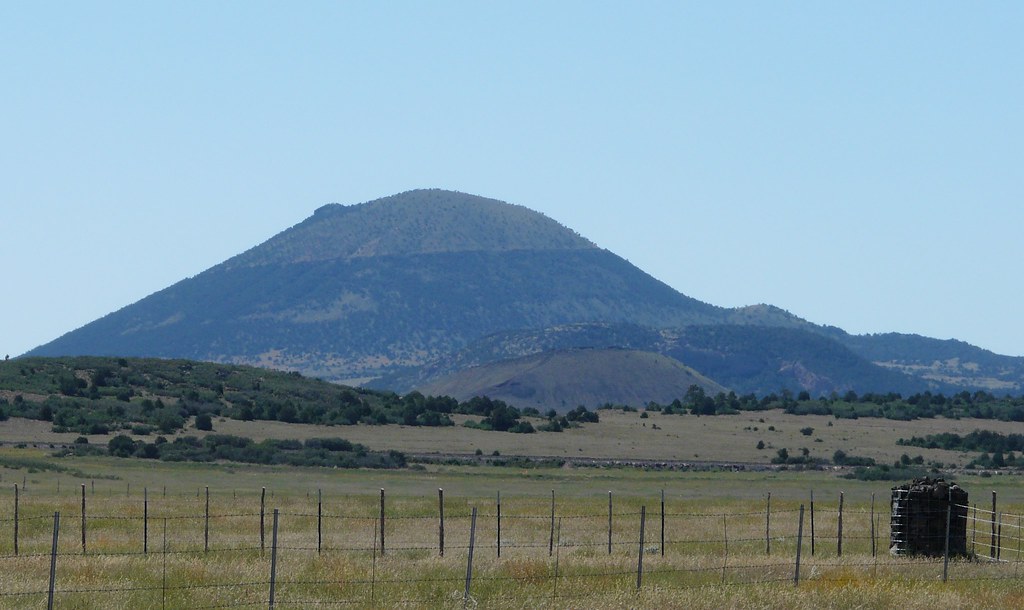 Loose cinders, ash, and rock debris piled up to form a conical mountain, while lava erupted from fissures and vents closer to the volcano’s base. Lava-capped mesas throughout the volcanic field, including the Barella, Johnson, and Raton mesas, bear witness to these powerful eruptions. Lava and rocks in the area have a wide range of compositions, including felsic rhyolite, intermediate dacite and andesite, and mafic basalt. 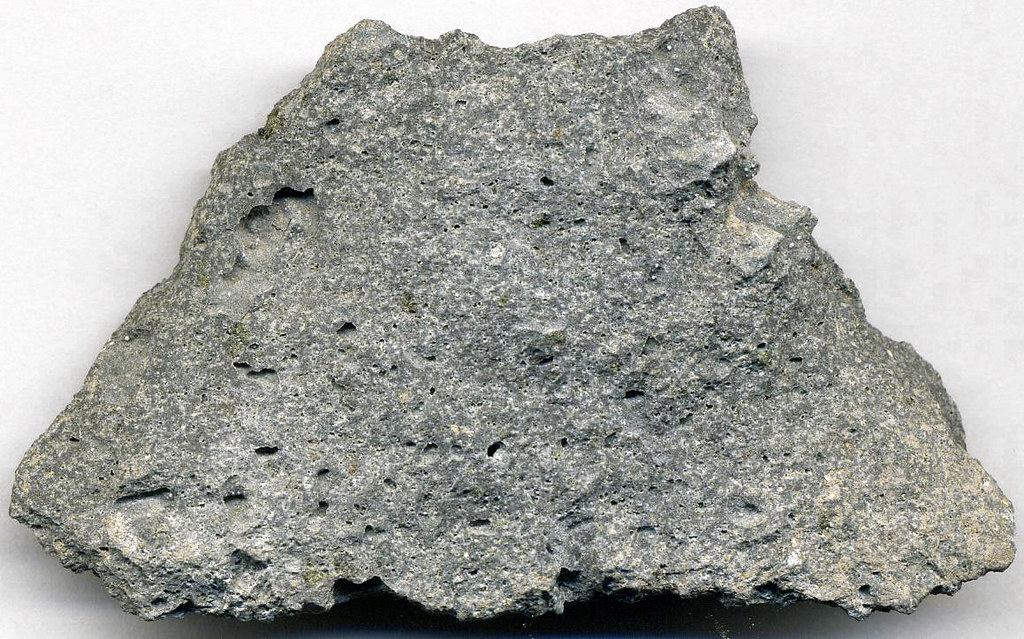 Many Quaternary deposits on the Great Plains of eastern Colorado and northeastern New Mexico are partly related to glacial processes. In the Southwest, glacial activity during the ice age was dominated by alpine glaciers in the mountains west of the Plains. Glacial erosion in the mountains resulted in vast amounts of fine- to medium-sized sediment being carried onto the Great Plains by rivers such as the Platte in Colorado. Finer sediment known as glacial flour, the product of glaciers grinding over rock, was picked up by the wind and deposited across large swaths of the region in layers called loess.