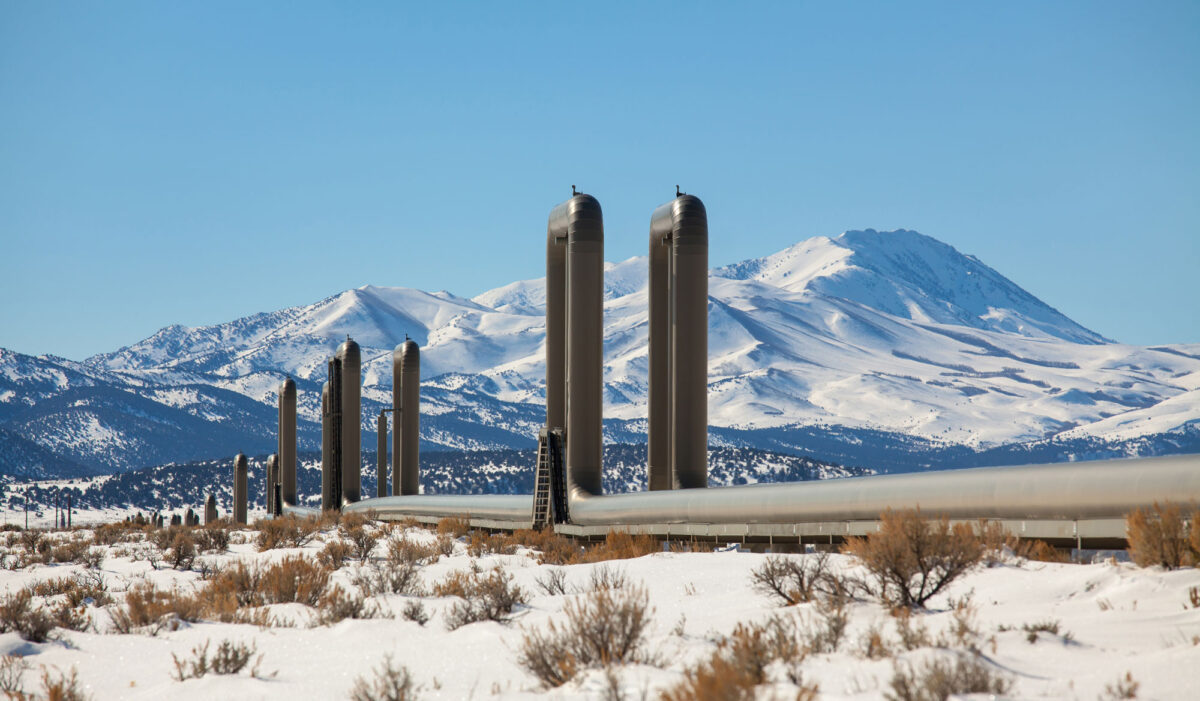 Page snapshot: Introduction to energy in the Basin and Range region of the western United States, including fossil fuels and renewable energy.

Credits: Some of the text on this page comes from "Energy in the western US" by Carlyn S. Buckler and Gary Lewis, chapter 7 in The Teacher-Friendly Guide to the Earth Science of the Western US, edited by Mark D. Lucas, Robert M. Ross, and Andrielle N. Swaby (published in 2014 by the Paleontological Research Institution; currently out of print). The book was adapted for the web by Elizabeth J. Hermsen and Jonathan R. Hendricks in 2022. Changes include formatting, revisions, and additions to the text and images. Credits for individual images are given in figure captions.

The Basin and Range region is named for its erratic and abrupt changes in elevation and topography. Deserts, mountain ranges, lakes, and valleys can be found within this region, and it is home to some of the most unusual and inhospitable ecosystems in the world (the Mojave Desert and Death Valley, among others). Because its large cities are located hundreds of miles apart and its human population is spread out over long distances, the delivery of petroleum and natural gas products is difficult. However, the Basin and Range is a prime area for geothermal and solar energy production. 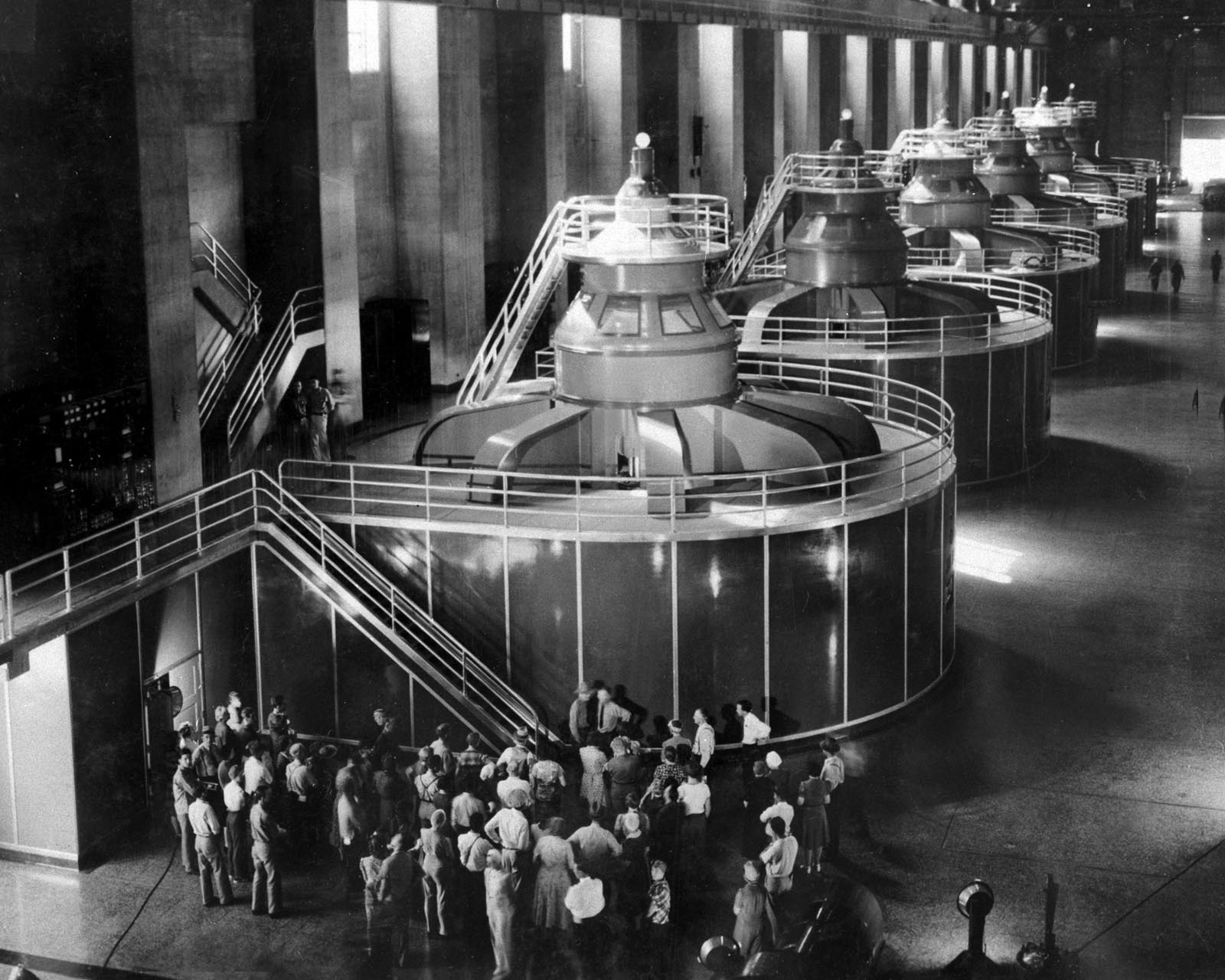 Natural gas provides much of the region’s power, although most of this resource is imported from elsewhere. In the past, coal was also an important factor in power production.

From 1971 to 2005, the coal-fired Mohave Generating Station that was located in Laughlin, Nevada (on the southern Nevada-western Arizona border), produced electricity mainly for Los Angeles, California. The coal from this power plant came from the Black Mesa Mine Complex, a large strip mine located on Diné (Navajo) and Hopi land in Navajo County, northeastern Arizona. Coal from the mine was mixed with water to make a slurry, which was then piped more than 200 miles from the mine to the power station. The creation of the coal slurry was controversial, as it used more than one billion gallons of groundwater annually, depleting the Navajo Aquifer. The Mohave Generating Station was demolished in 2011, and the Black Mesa mine is no longer in operation. 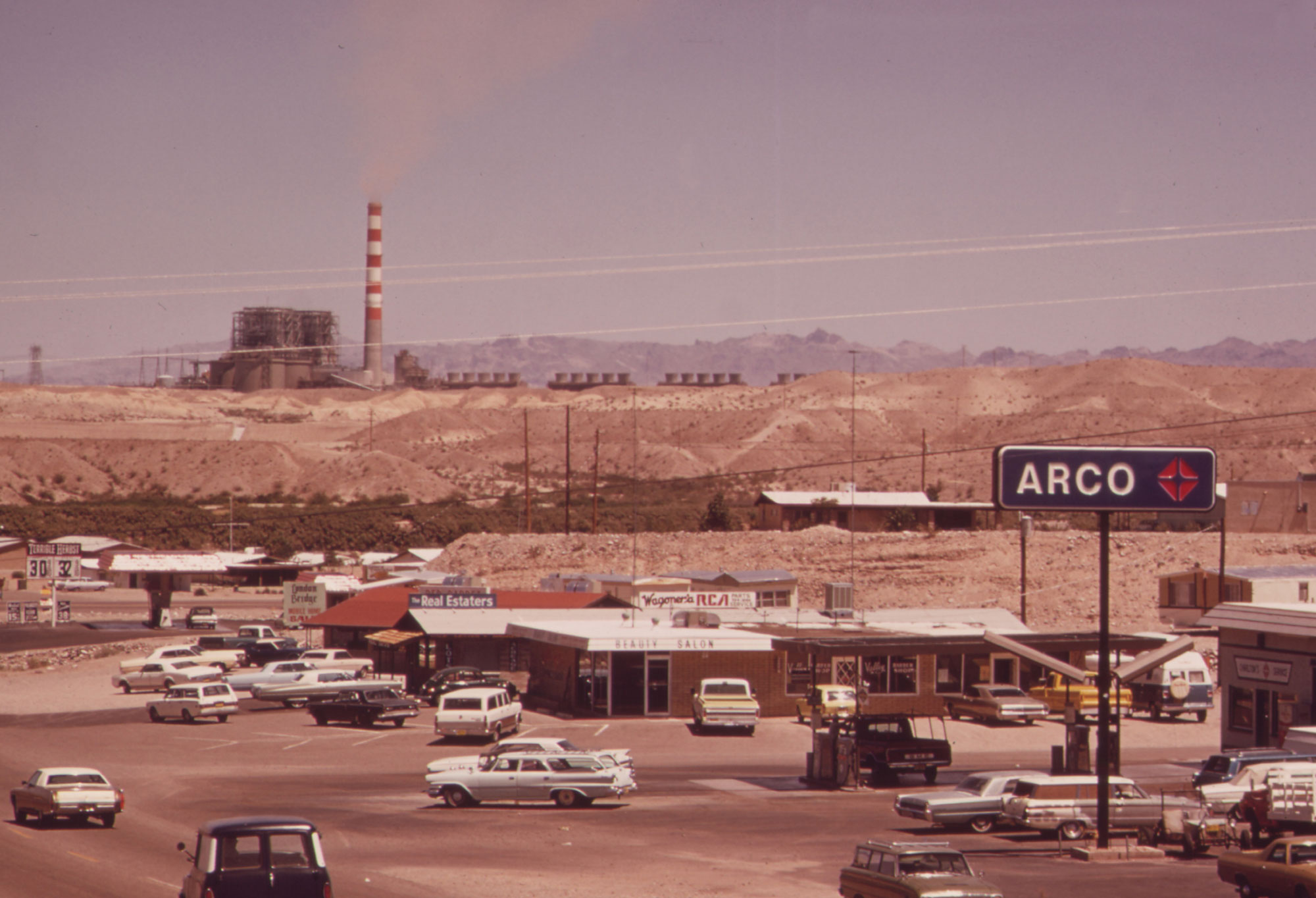 Solar power in the West has grown extremely quickly in recent years, thanks to the solar resources located in the Basin and Range. The Mojave Desert in southeastern California and southwestern Nevada is prime solar energy territory.

California produces the most solar energy in the U.S. As of 2018, California had solar capacity of 12,000 MW; as of 2021, more than 15% of the energy generated in the state came from solar. While production of solar electric power has grown exponentially in the U.S. as a whole, production in California vastly outranks the second-largest solar producer (as of 2021, Texas).

Some of the world's largest solar power plants have been built in the Basin and Range. The Desert Sunlight solar project near Desert Center, California, is a photovoltaic plant that has a 550 MW capacity. The Ivanpah Solar Power Plant is a thermal solar plant in southern California that has a 392 MW capacity. This plant uses mirrors to concentrate sunlight on water towers. The sunlight heats the water, creating steam that drives turbines used to generate power. 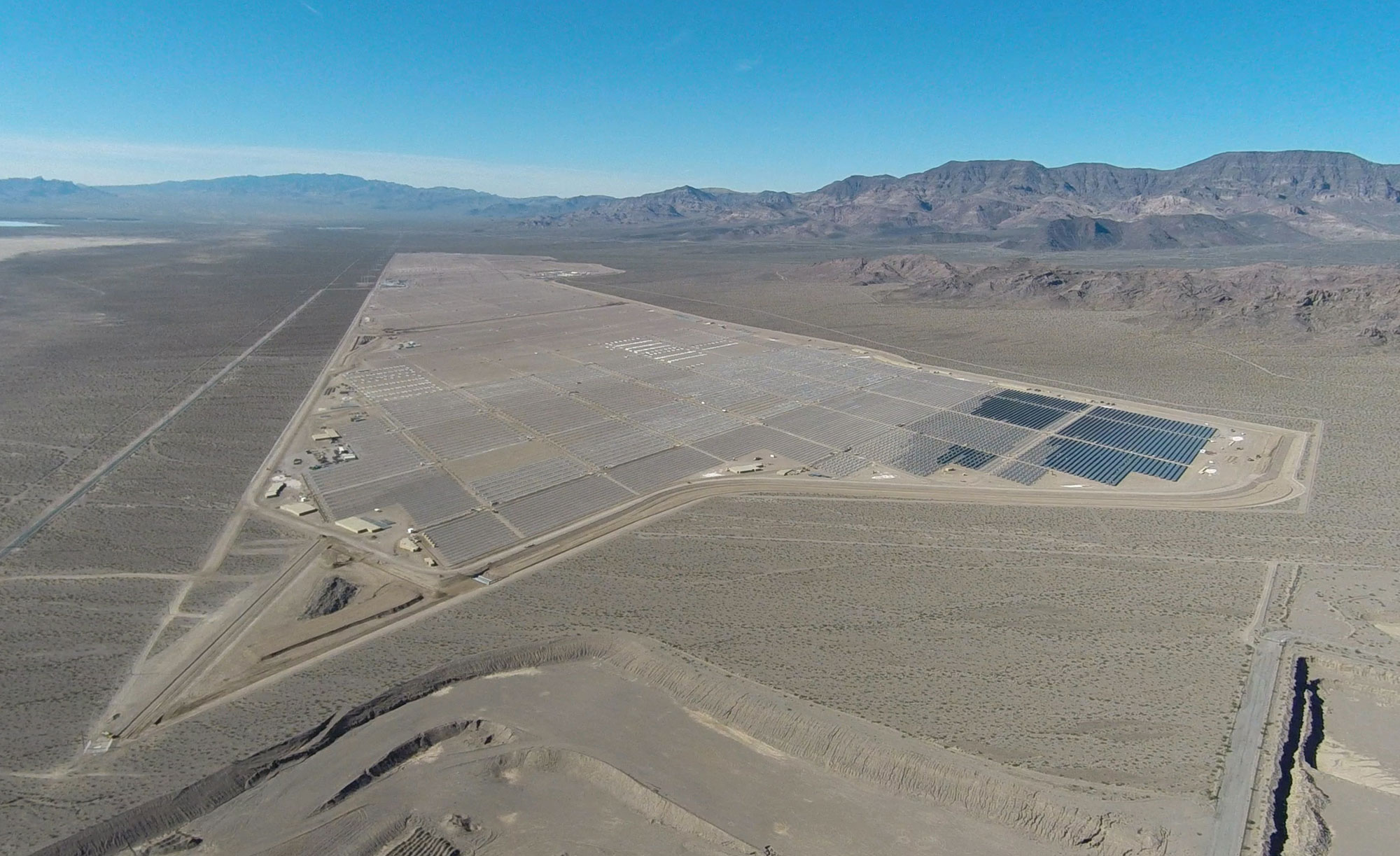 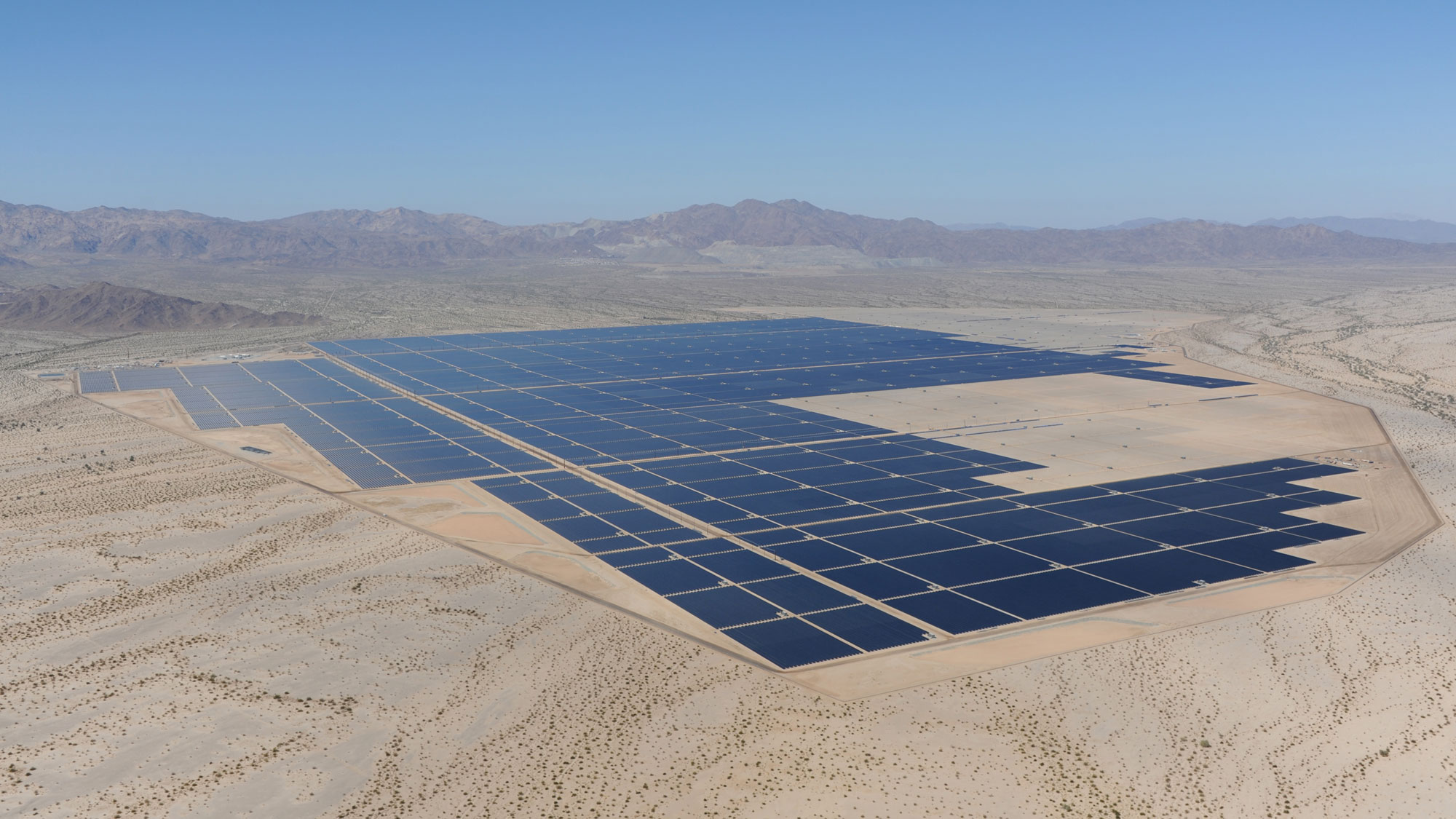 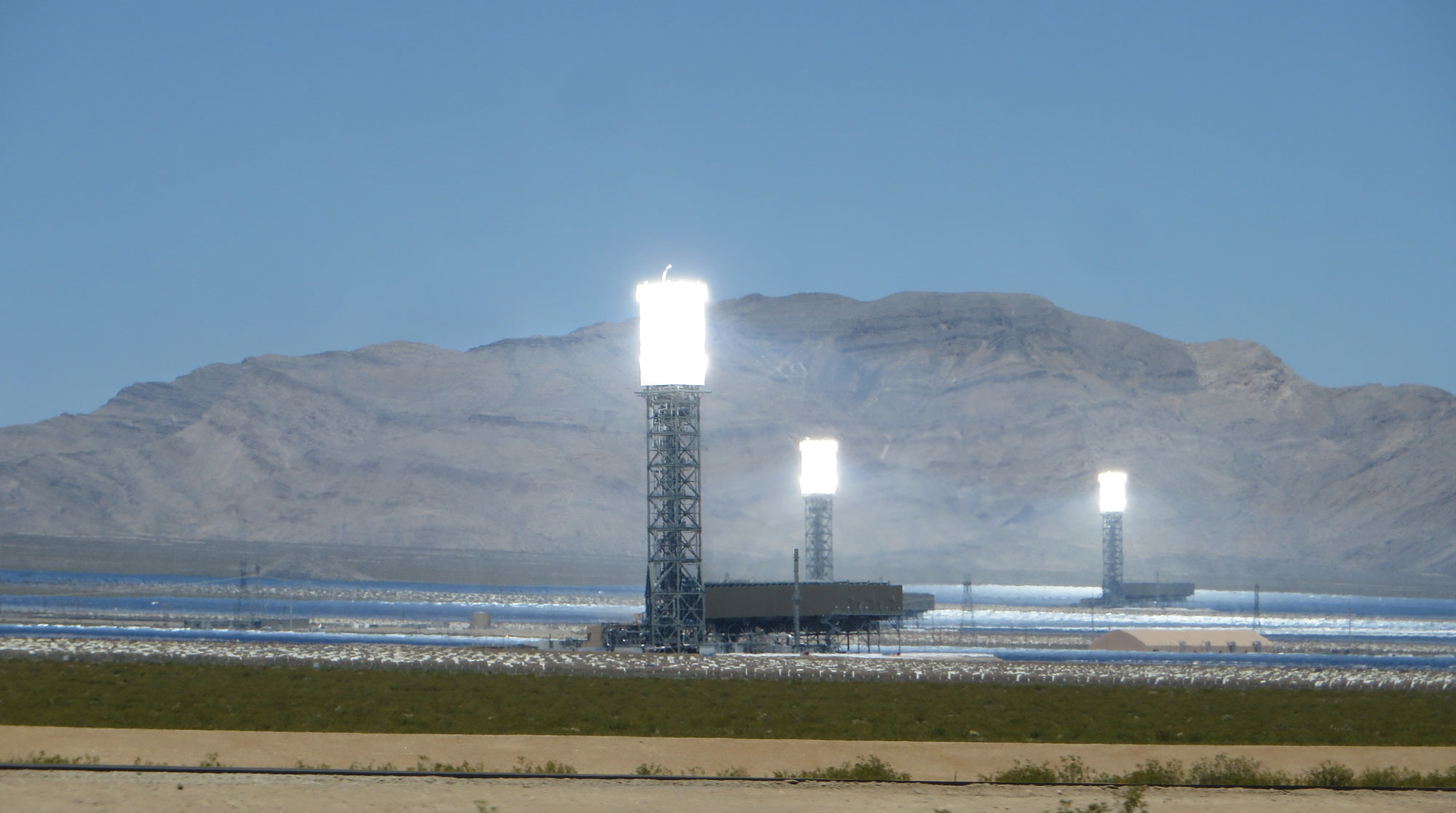 Geothermal energy comes from heat within the Earth, which is created on an ongoing basis by radioactivity. This energy powers mantle convection and plate tectonics. The highest-temperature conditions exist in tectonically active areas, including the Basin and Range, Iceland (part of the Mid-Atlantic Ridge, an oceanic spreading center), Japan (an area of subduction). Hawaii and Yellowstone, areas over hot spots, are also high-temperature spots.

California also has an extensive network of geothermal plants. Some of these are in the Basin and Range region, particularly a large complex of plants near the Salton Sea, a man-made inland sea in the Imperial Valley. The capacity of this complex is about 345 MW. 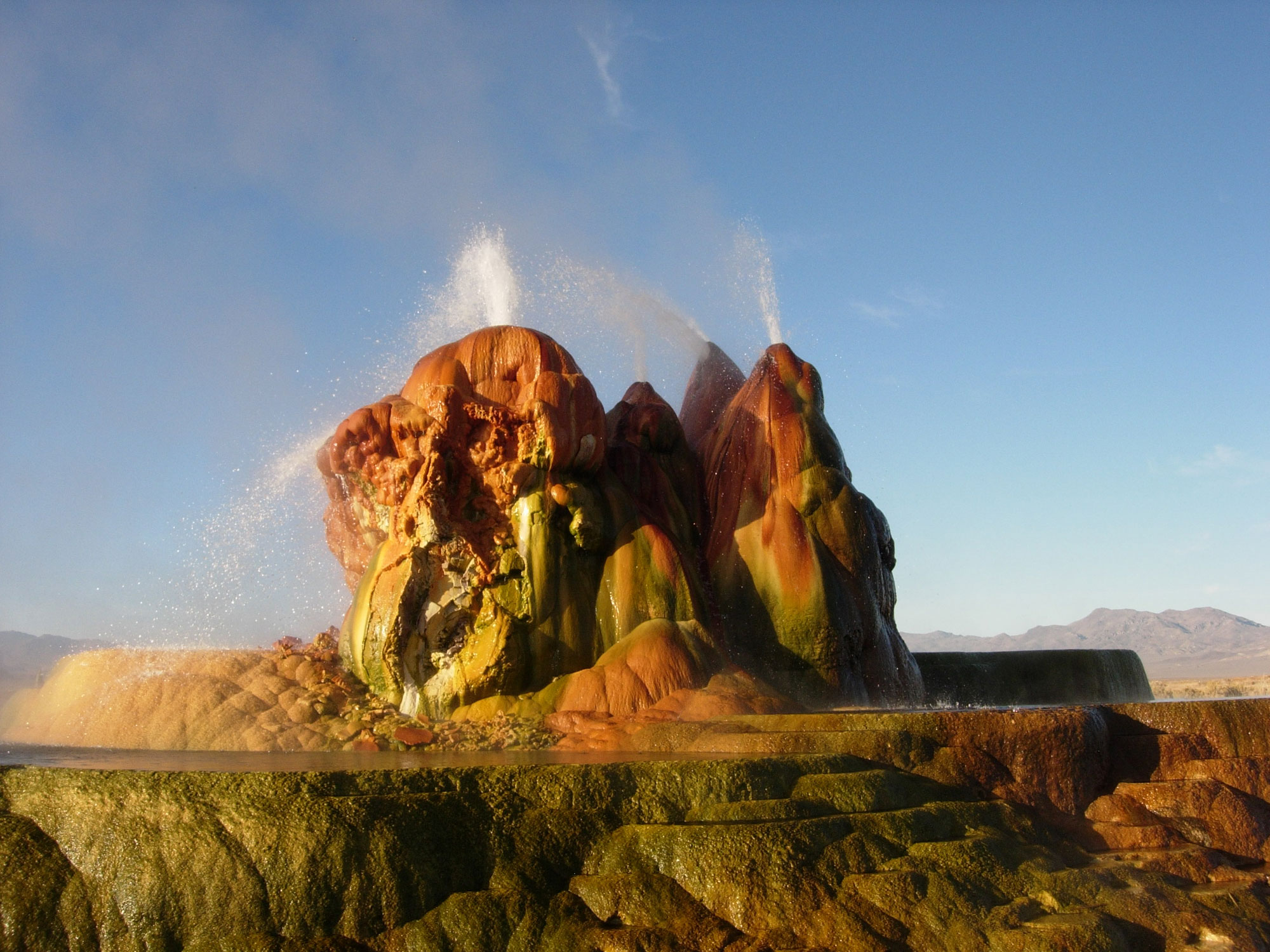 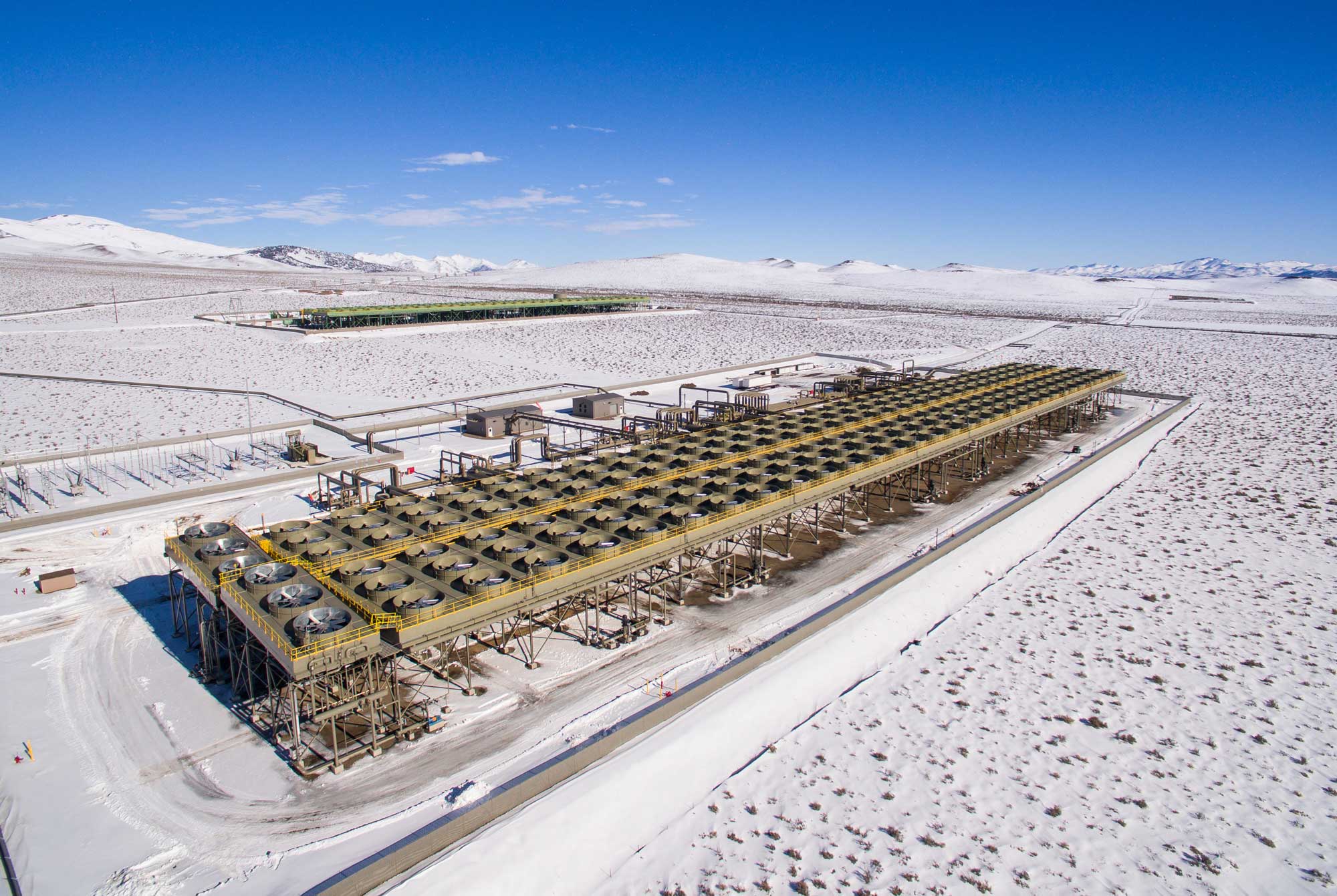 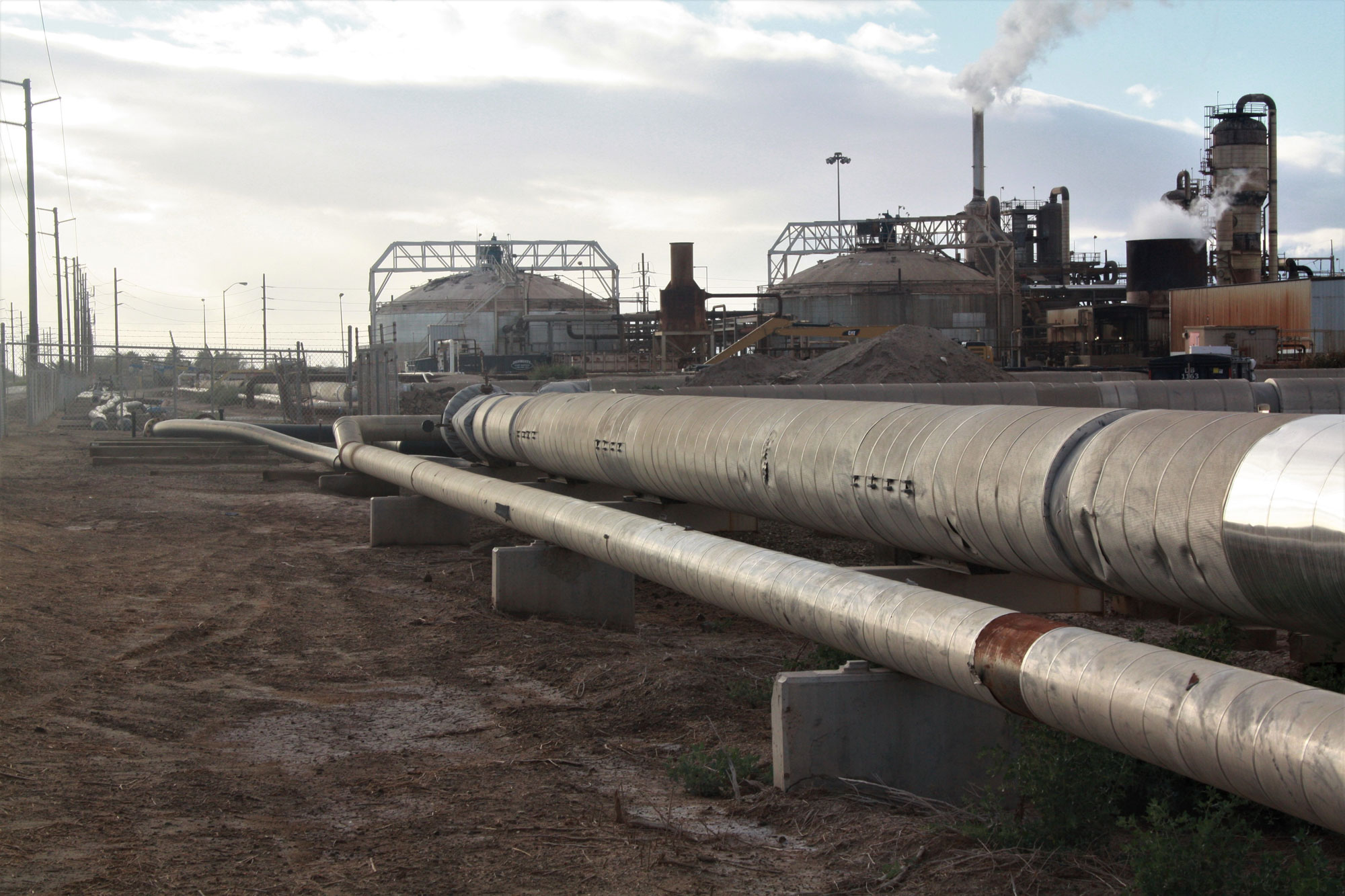 Nevada's largest hydropower plant is the Hoover Dam, located on the Colorado River on the border of Arizona and Nevada. It was the world's highest dam, largest electric-power generating station, and largest concrete structure when built in the 1930s. The plant's total power generating capacity is approximately 2 GW, and it is the sixth largest among U.S. hydroelectric power stations. Approximately 20% of the Hoover Dam's generated power goes to Arizona; another 25% goes to Nevada, and the rest is used by California. As of 2022, drought conditions in the western U.S. caused levels in Lake Mead to drop significantly, which triggered mandatory water-conservation measures. Water levels have become so low that the original water intake pipes for the dam have been exposed. 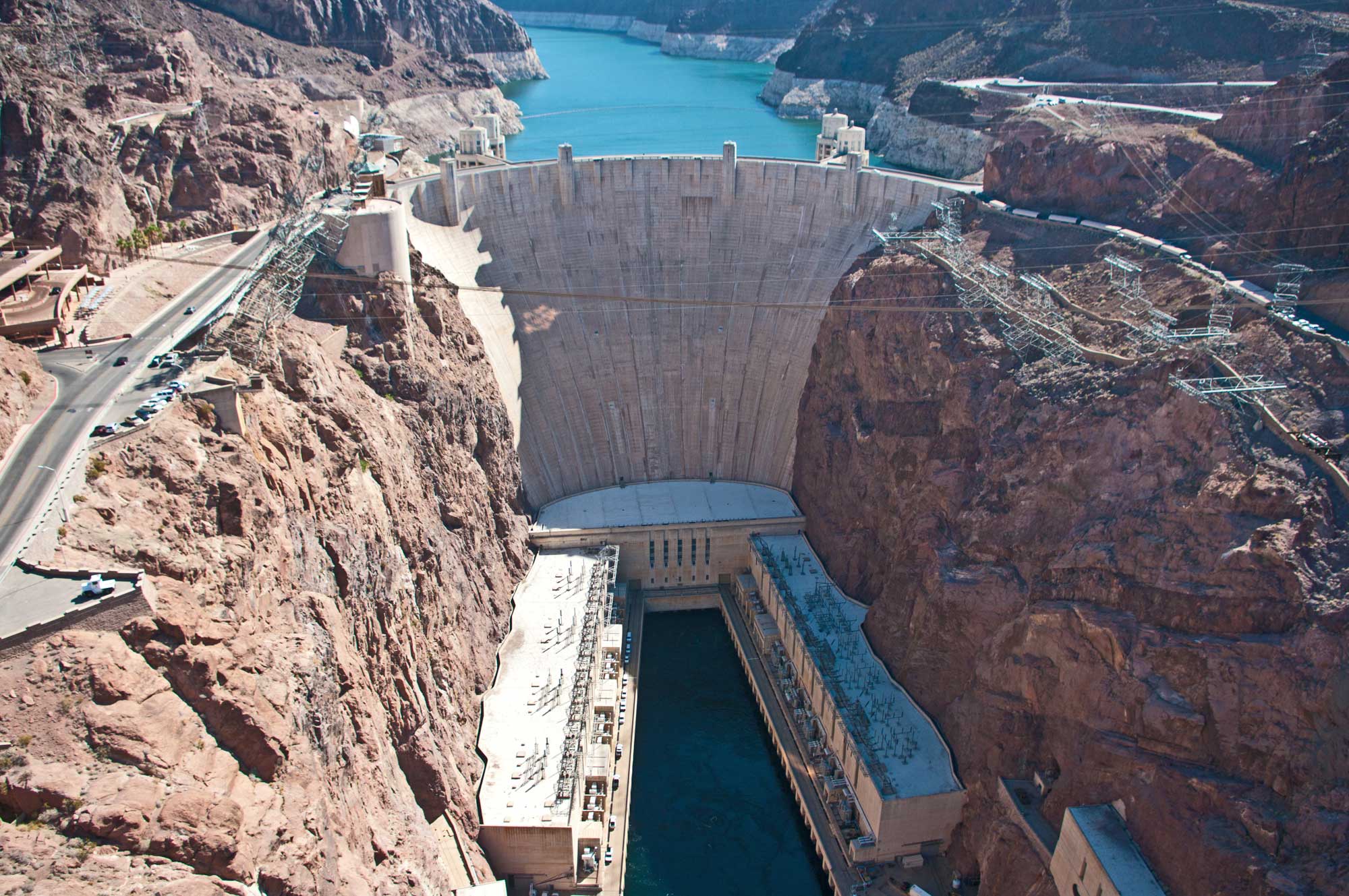 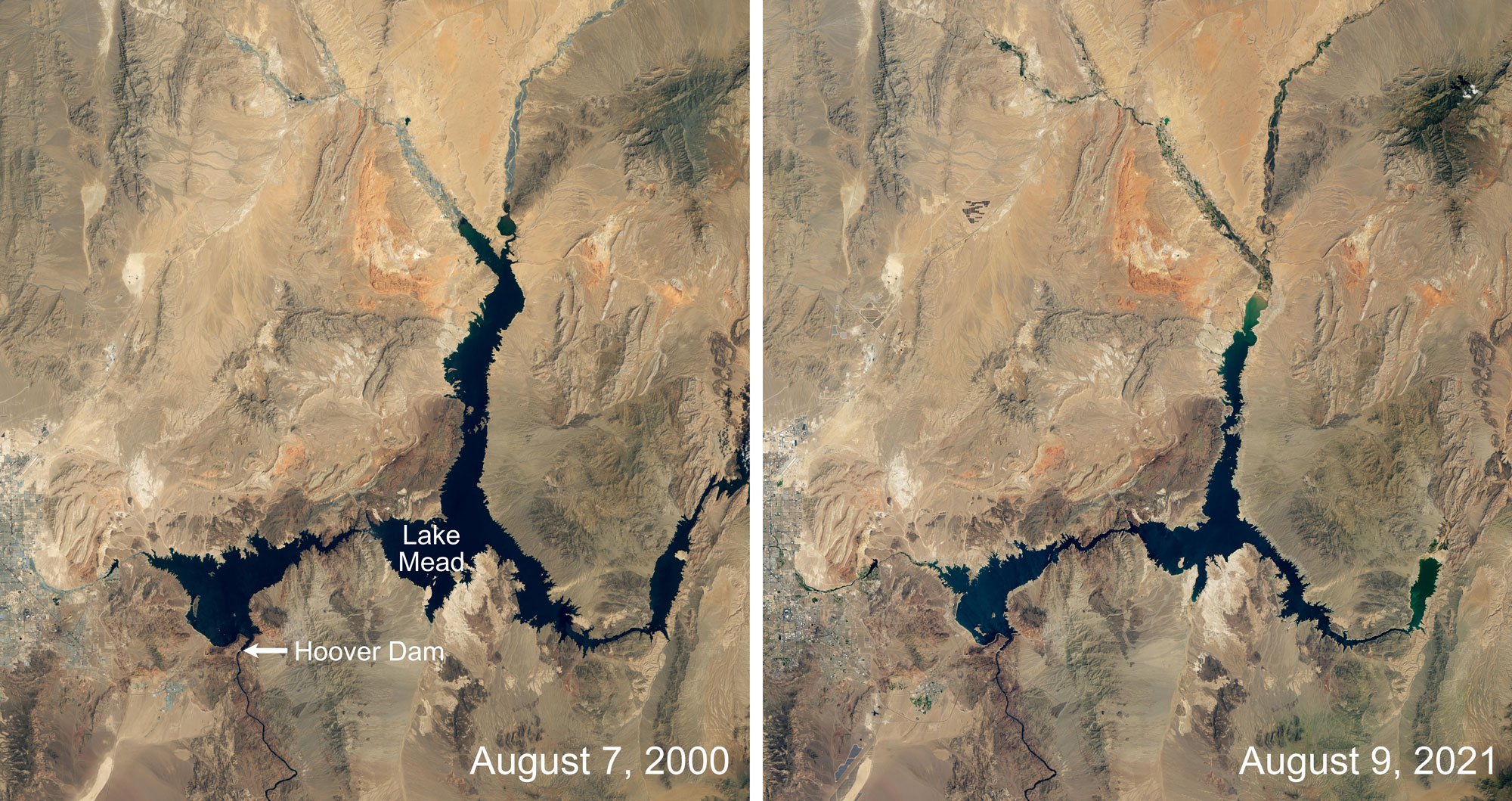 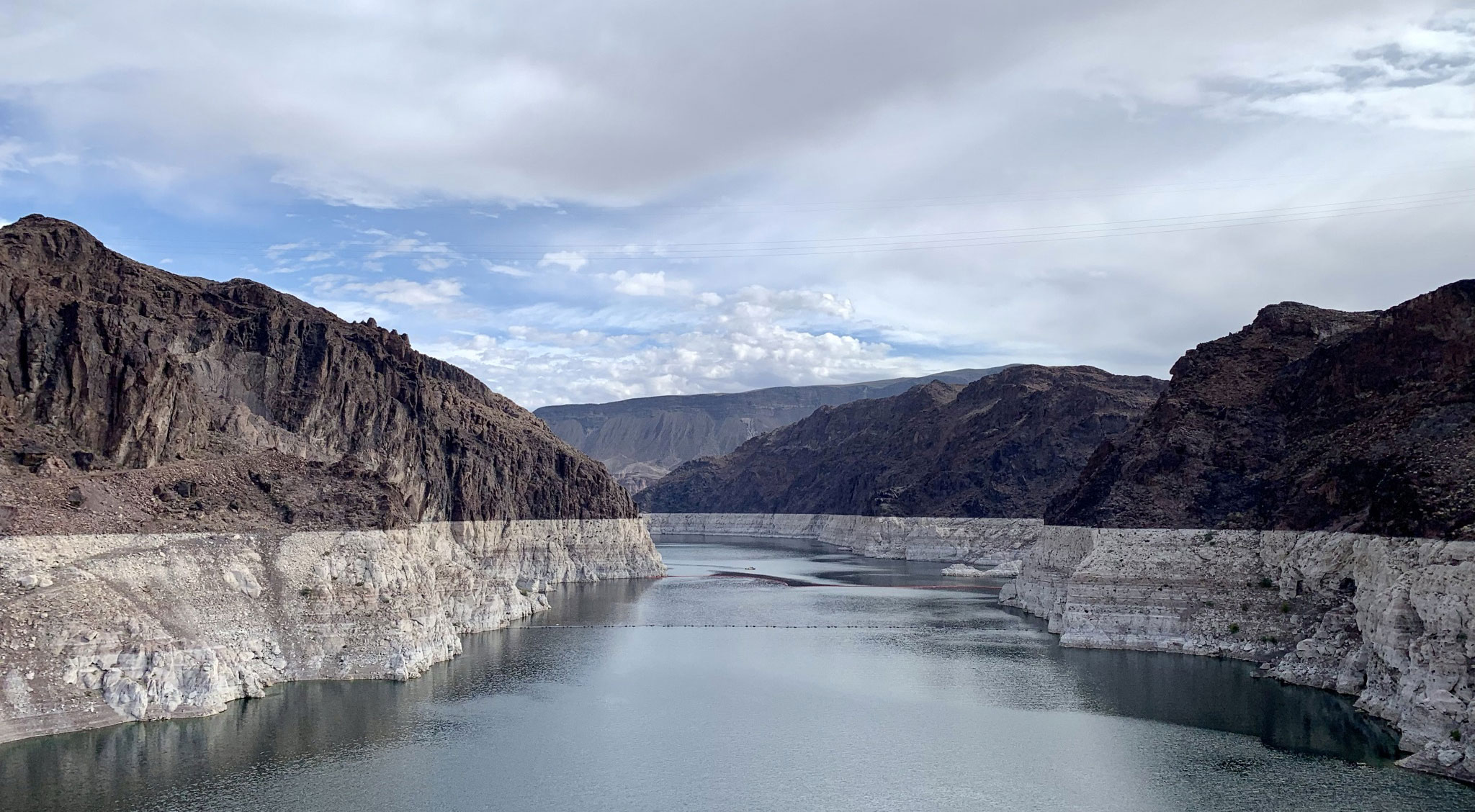 Lake Mead near Hoover Dam, Arizona-Nevada border, October 2021. Lake Mead is a major source of hydroelectricity, which is produced at Hoover Dam, in the Southwest. In 2021, the lake levels were becoming alarmingly low; the "bathtub ring," or light-colored rocks near the lake surface, show the former lake level. Photo by APK (Wikimedia Commons, Creative Commons Attribution-ShareAlike 4.0 International license, image cropped).

It is difficult to harness Nevada's wind using current technologies. The state's wind is inconsistent and, when present, can be too strong to safely drive wind turbines. Thus, its overall potential for wind farm development is low. Spring Valley Wind Farm is Nevada's first and sole wind farm.

Some wind farms have been developed in the Basin and Range region of southern California, like the Ocotillo Express Wind Energy Project in Imperial County. The large San Gorgonio Pass wind farm is located near the border between the Pacific Border and Basin and Range physiographic regions in Riverside County; its capacity is more than 600 MW. 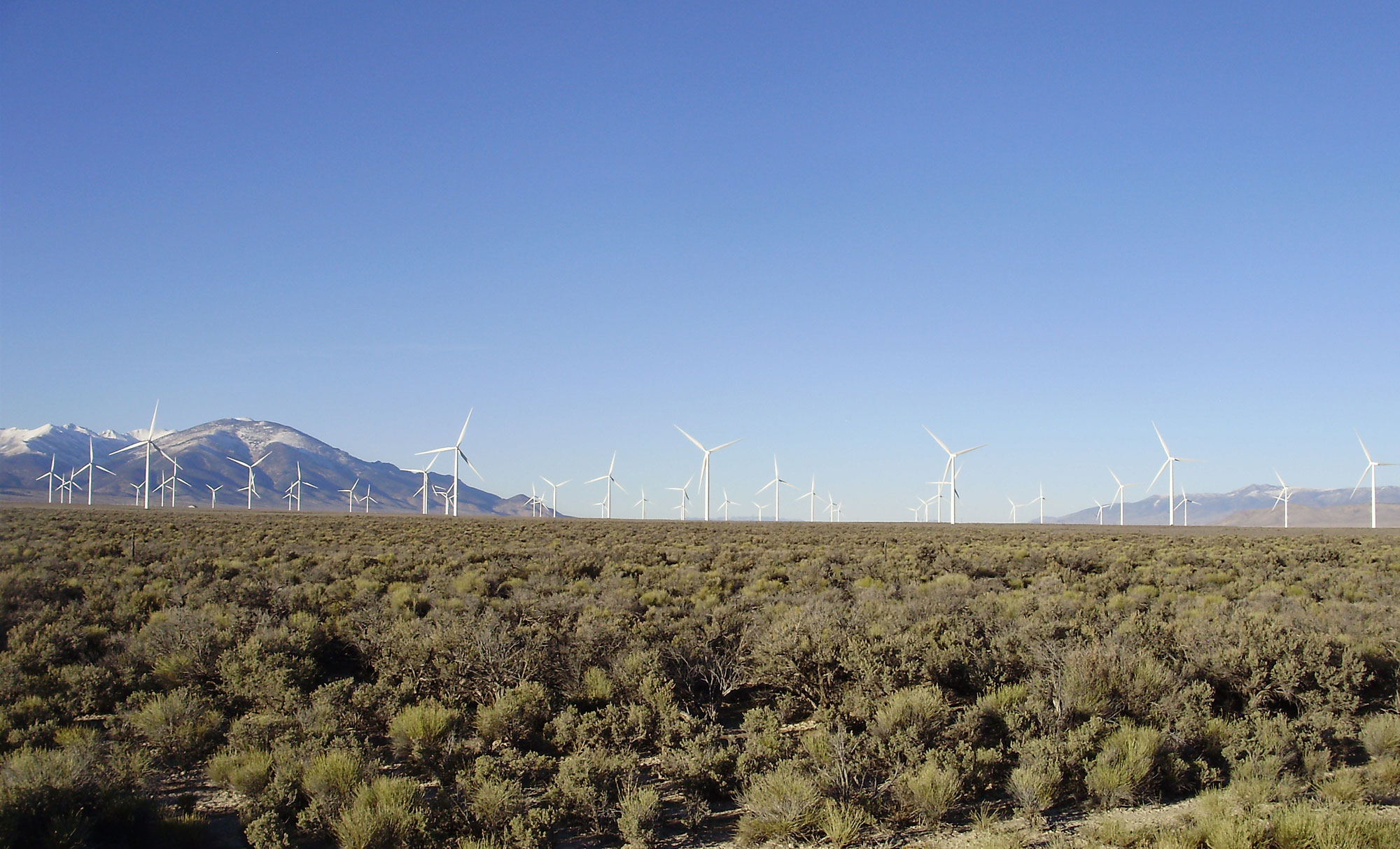 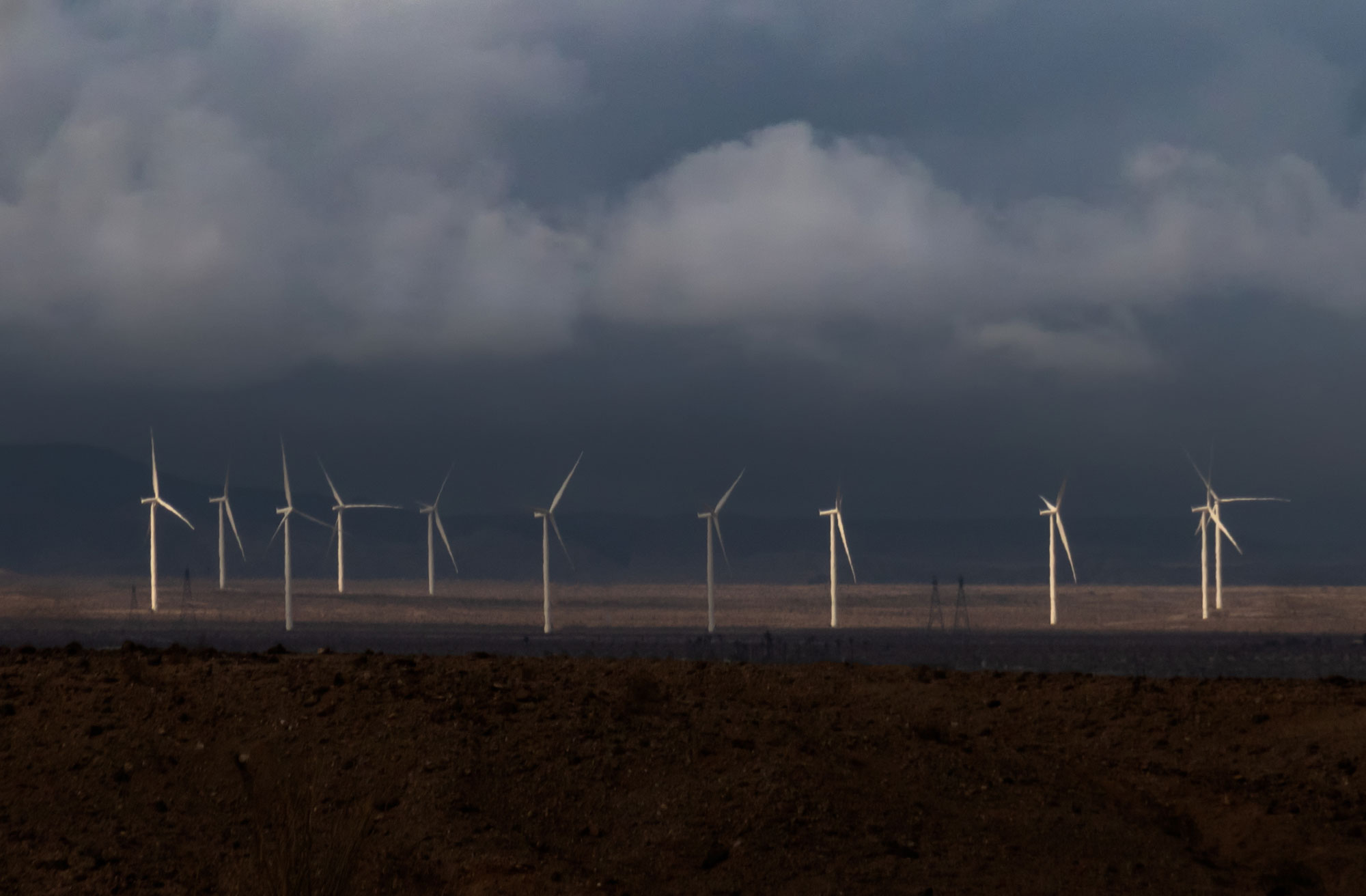