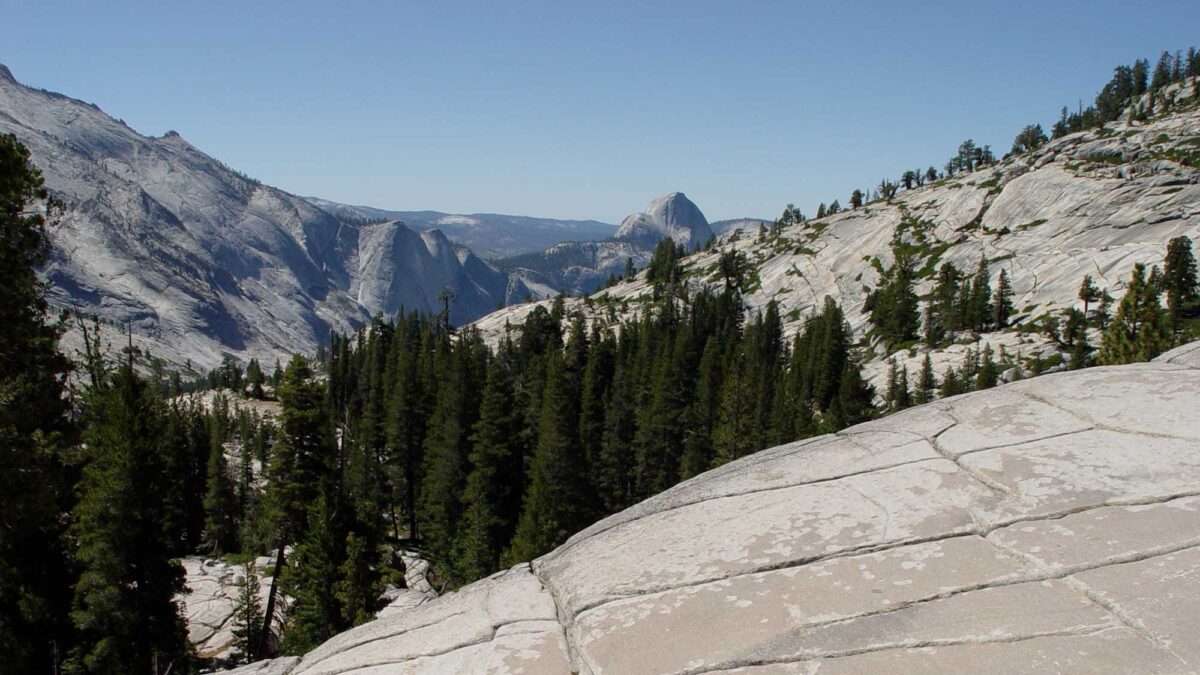 Spotlight: Overview of the rocks of the Sierra-Nevada and Cascades region of the western United States, including California, Nevada, Oregon, and Washington.

Topics covered on this page: Overview; The Sierra-Nevada; The Cascades; Resources. 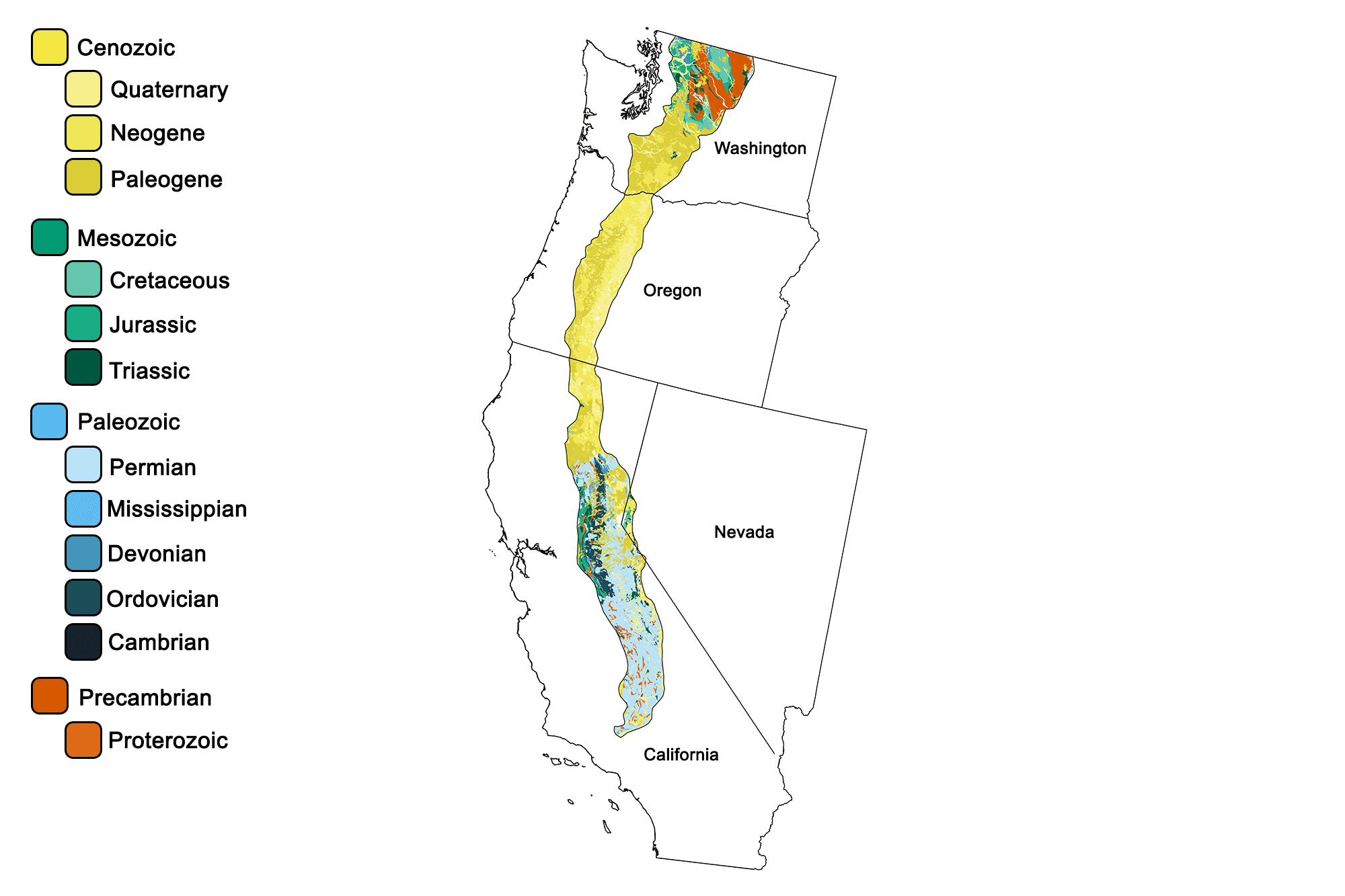 The rocks of the Cascades and the Sierra Nevada are primarily igneous, since they resulted from melting above a subduction zone. The Cascades are younger mountains, having first appeared 36 million years ago, and are still forming today. In contrast, the plutonic core of the Sierra Nevada began to form over 200 million years ago during the Nevadan Orogeny. Oceanic lithosphere at the edge of the North American continent melted while subducting at a steep angle, and the magma rose back through the continental crust to form a volcanic arc. While these volcanoes ruptured the surface, massive bodies of magma slowly cooled deep below, creating a huge granite batholith. During the Laramide Orogeny in the late Cretaceous (70–80 million years ago), the angle of subduction became shallower, possibly due to an increased rate of plate convergence. As a result of this shallow subduction angle, volcanism slowed and the North American plate was heavily uplifted. The original volcanoes are long since worn away, and their sediments can now be found in the Central Valley of California.

The Sierra Nevada that we see today is composed of the once-deep granite batholith, uplifted with the North American plate and exposed by erosion. The uplifted granitic intrusion is 640 kilometers (400 miles) in length, and lies mostly within California, although one small spur resides in Nevada. 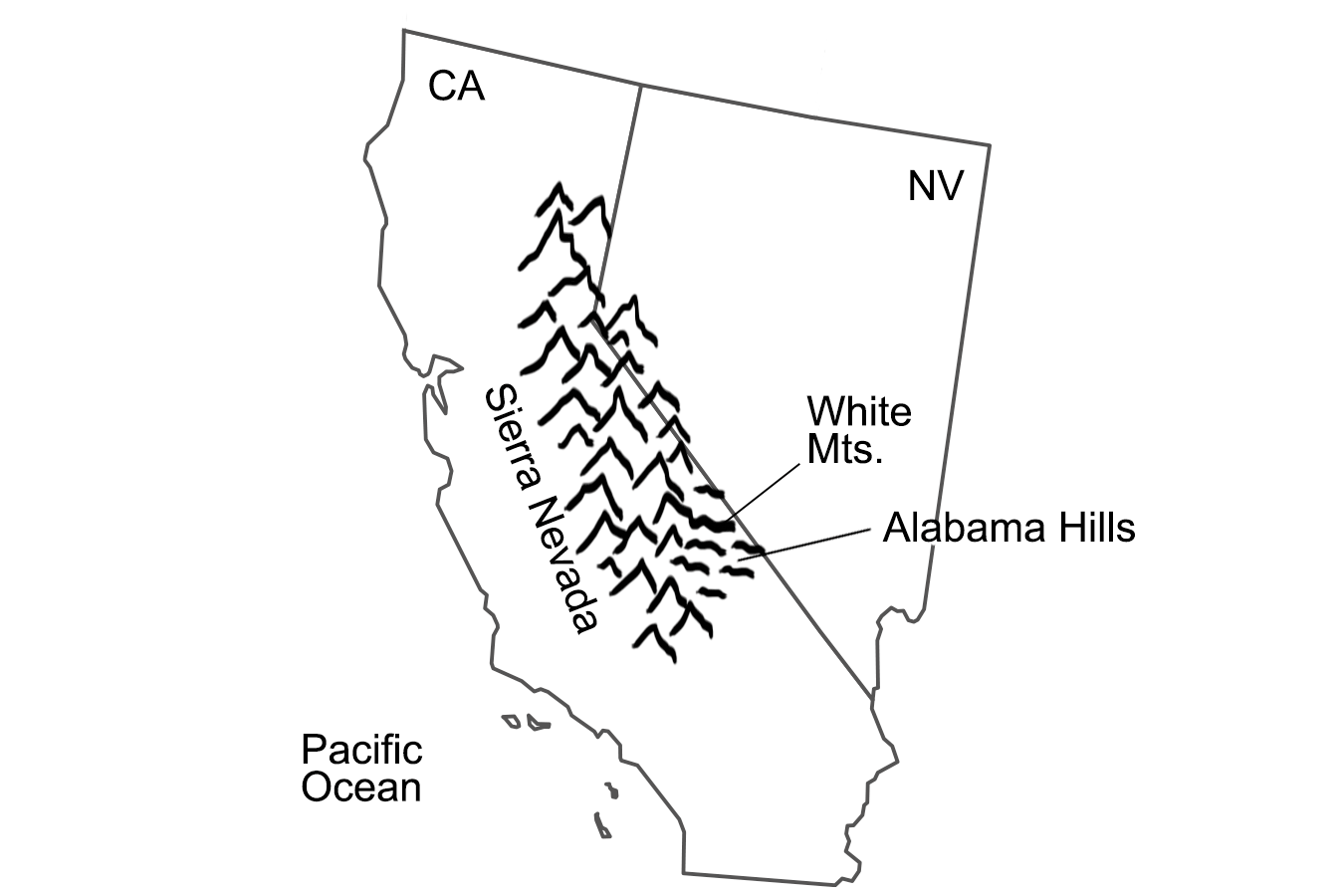 Extent of the Sierra Nevada range. Image by Wade Greenberg-Brand, modified for the [email protected] project.

The Sierra Nevada batholith is composed of over 100 different plutons. Each pluton has a slightly different chemistry, but all of the rock is made up of some form of granite. The White Mountains and the Alabama Hills are considered part of the same batholith, but they have been separated from the main body by faulting.

Mt. Whitney and the other high peaks of the Sierra experience frequent freezing and thawing, which creates a process called frost wedging. At these high elevations, water seeps into cracks in the rocks and then freezes, expanding as it transitions from liquid to solid. This forces the cracks to widen, and the process is repeated as temperatures rise and fall, finally shattering the rocks. 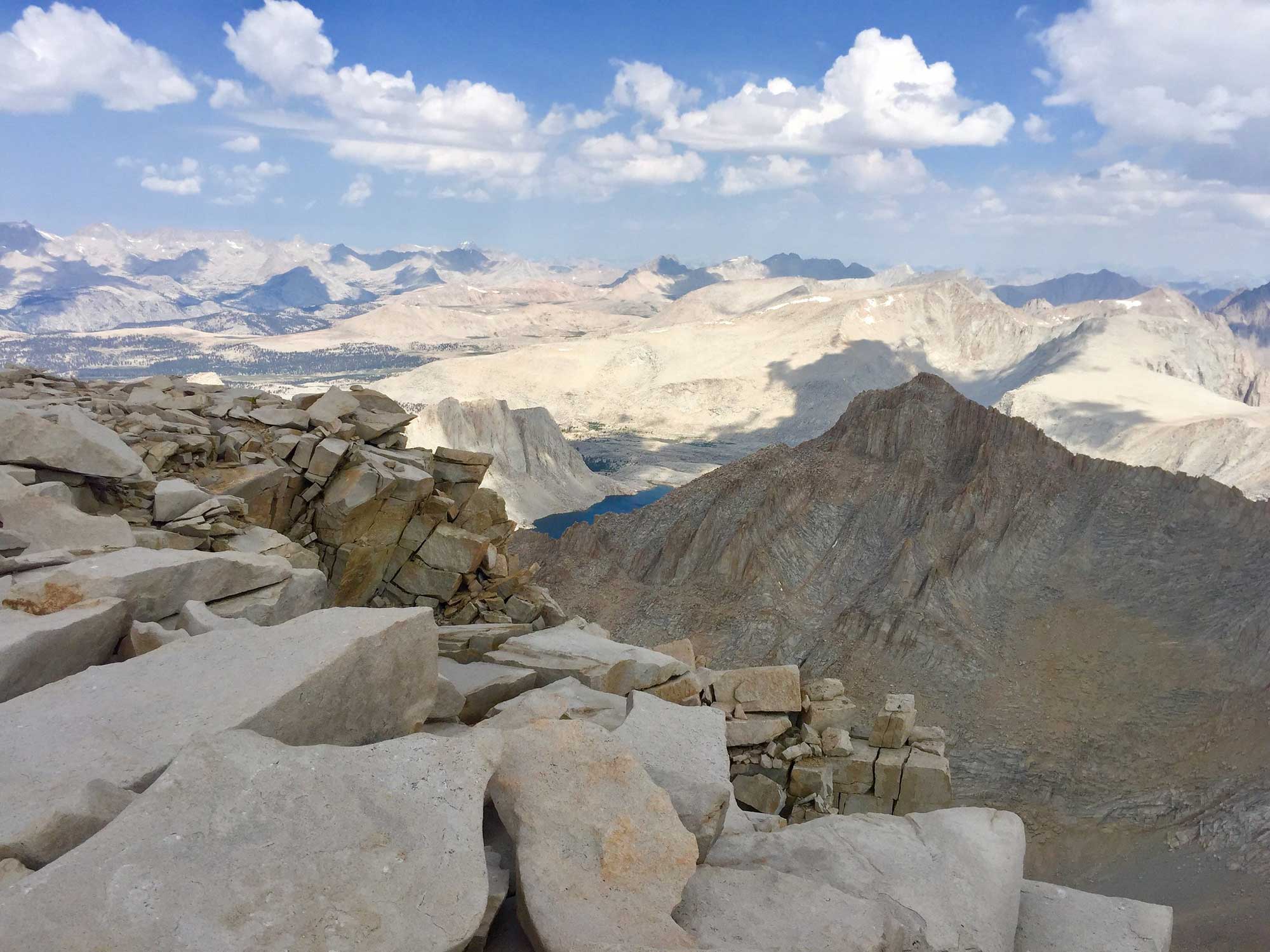 The rounded rocks of the Alabama Hills appear markedly different from the jagged granite peaks of Mt. Whitney above them, not because they are made of a different rock, but because they weather differently. 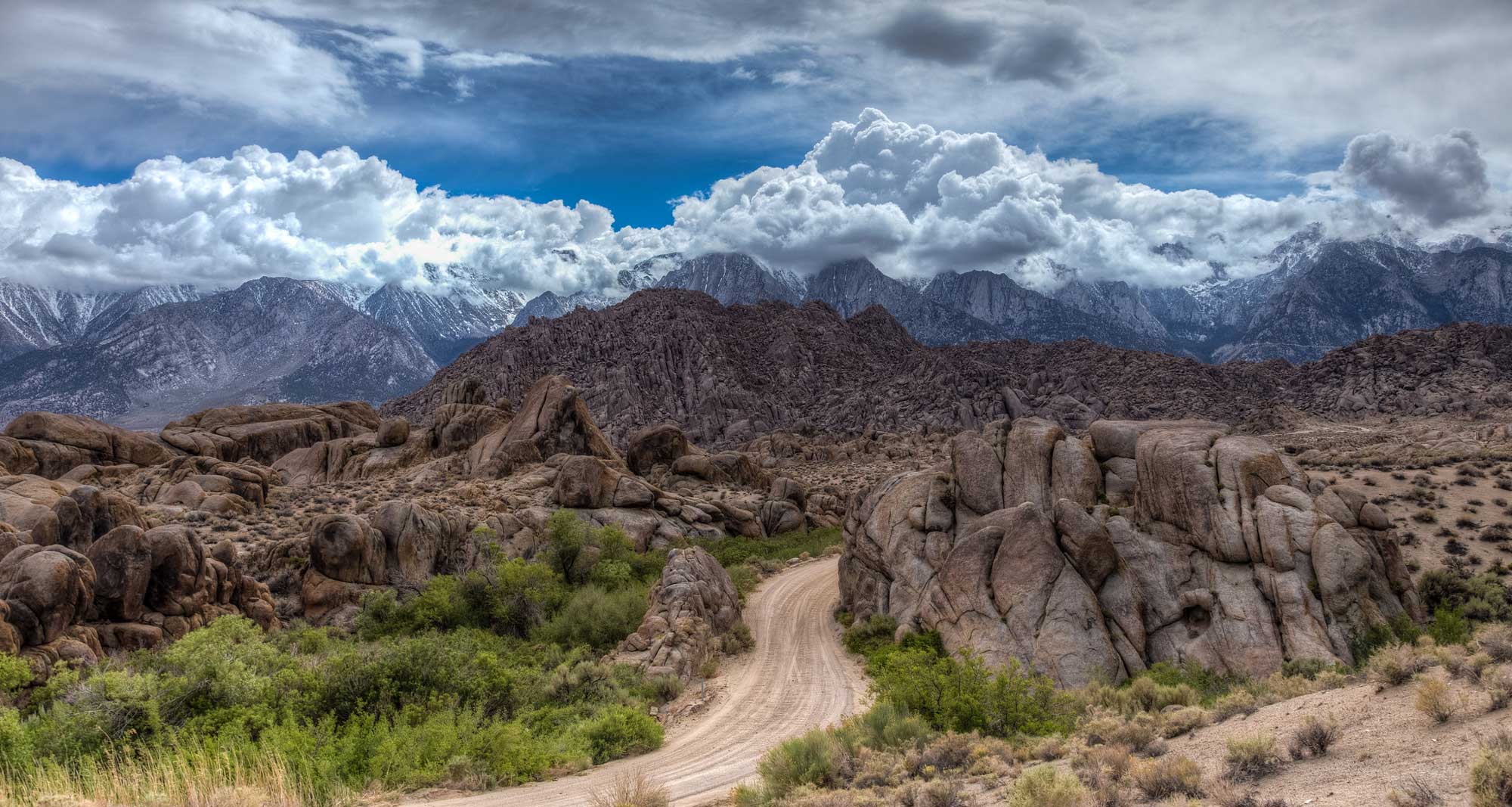 Rounded granite of the Alabama Hills with the Sierra Nevada in the background. Photograph by Fred Moore (Flickr; Creative Commons Attribution-NonCommercial 2.0 Generic license).

At lower elevations where freezing is infrequent, the granite experiences spheroidal weathering. The rough edges of the rock wear away evenly, gradually revealing a smooth surface. The rocks tend to look browner because chemical weathering, which is enhanced at warmer temperatures, produces iron oxides, or rust.

A different weathering process, known as exfoliation, formed the impressive rounded granite domes of Yosemite National Park. Although granite is under tremendous pressure when it forms deep underground, it is at equilibrium with the surrounding rock because the pressure is equal in every direction. However, when it is uplifted, there is no longer any significant downward pressure on it, so it expands towards the surface. This expansion causes joints, or cracks, to form parallel to the surface, producing slabs that resemble the curved layers of an onion.

The most famous example of an exfoliation dome is Half Dome of Yosemite. 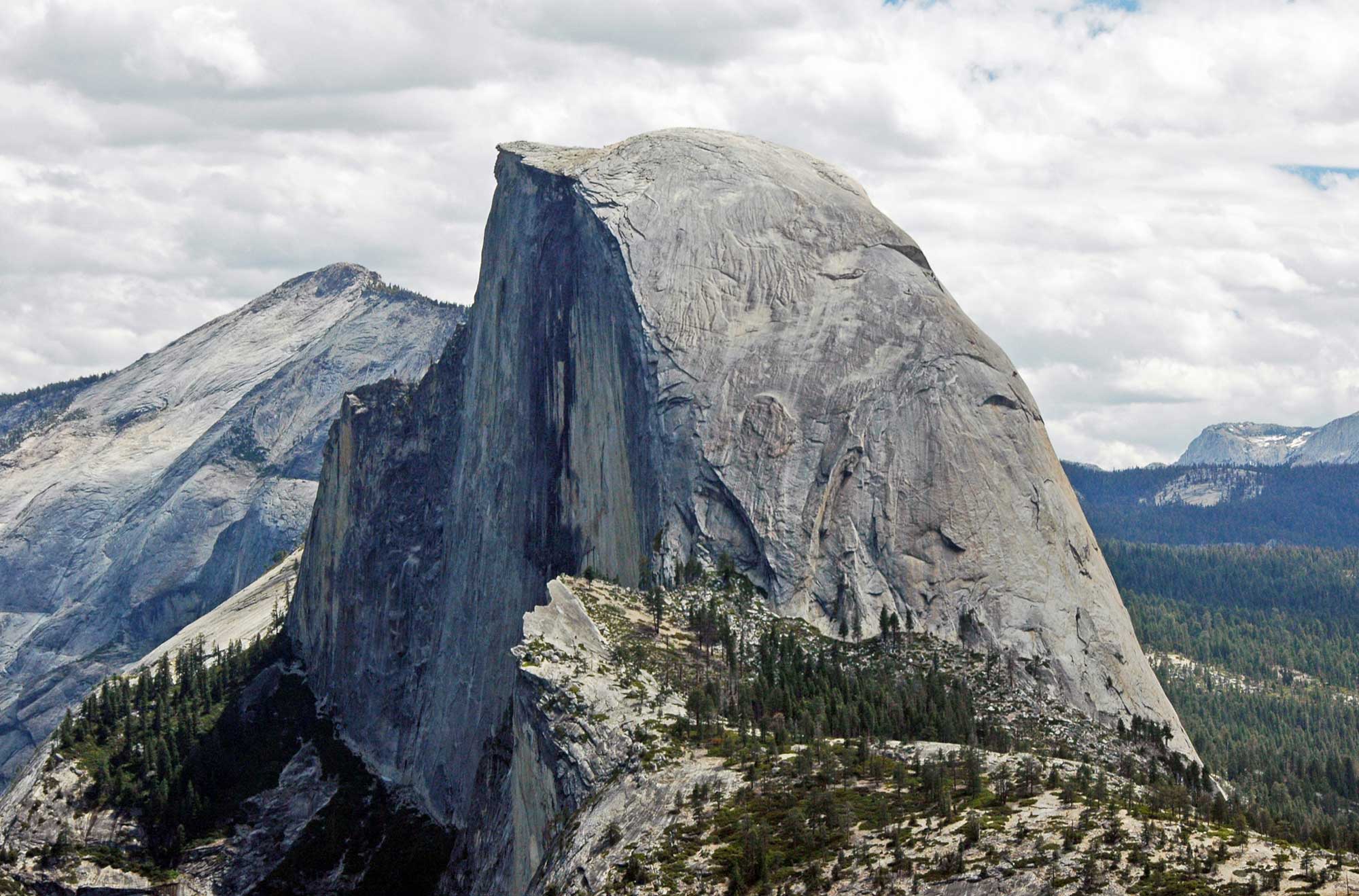 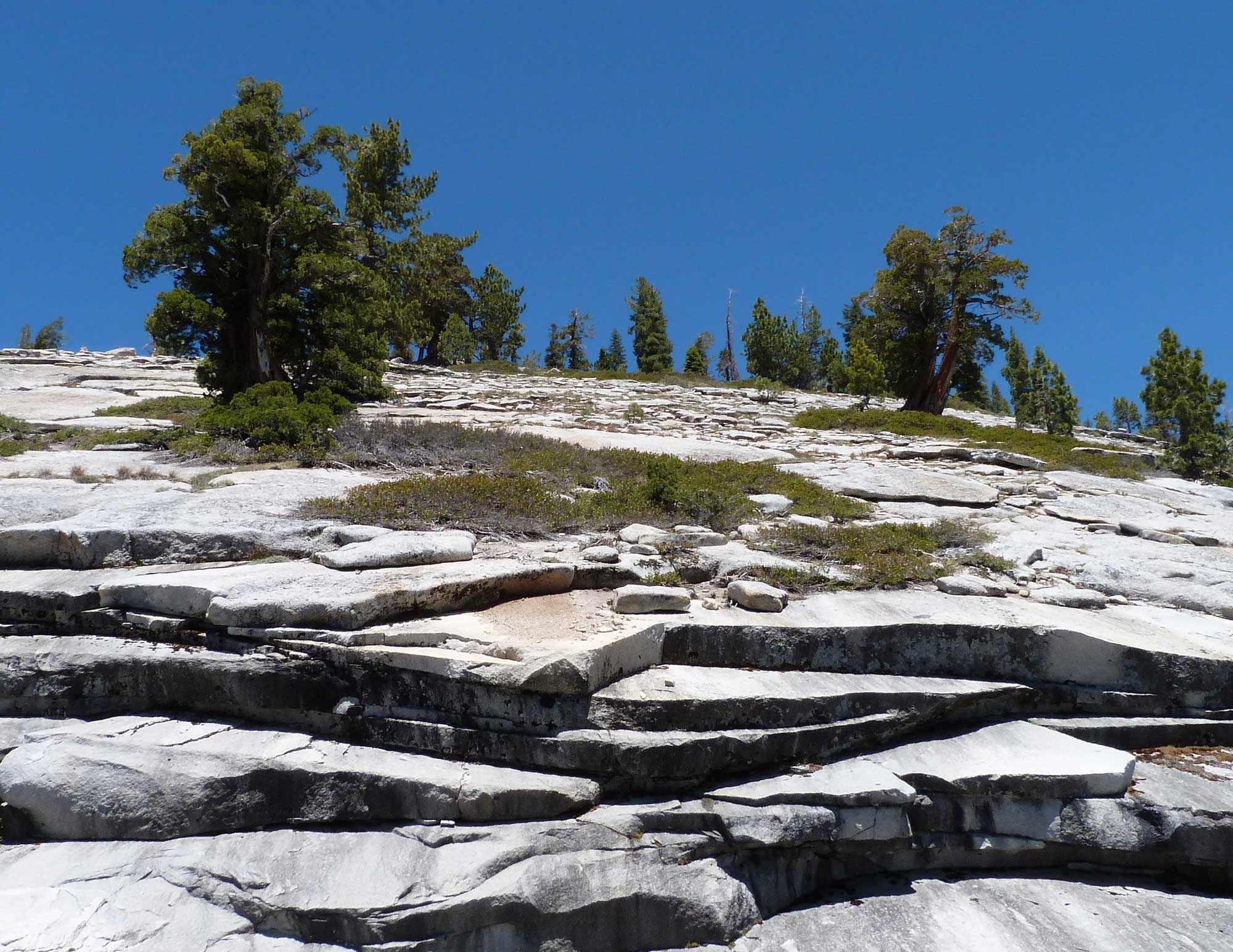 The superheated intrusions of granitic magma that formed the Sierra batholith also affected the surrounding rocks. One classic example is called a roof pendant, which forms when the intruding magma turns the surrounding sedimentary basement rock into metamorphic rock through the process of contact metamorphism. After uplift and erosion, the remnant of the metamorphic rock hangs above the granitic intrusion.

Formation of a roof pendant. Image by Wendy Van Norden, modified for the [email protected] project.

Besides the famous felsic granite of the Sierra Nevada, there are prominent mafic rocks as well, particularly in the Tehachapi Mountains at the southern end of the range. These mountains contain plutonic igneous and metamorphic rocks that are highly mafic due to their iron and magnesium content. The most abundant rock is mafic gneiss. Sometimes this dark rock can be found as inclusions within the lighter granite of the Sierra, indicating the presence of older rock enveloped by a newly hardening intrusion.

Several parts of the Sierra Nevada are composed of accreted terranes from the subducting Farallon plate along the western continental margin. The Western Foothills contain highly metamorphic rock that is the result of terranes colliding. The rocks here include serpentinite from the subduction zone as well as hydrothermally formed veins of quartz that contain gold.

The Cascade Range extends all the way from southern British Columbia to northern California, and is made up of a series of volcanoes that have built up a large platform of volcanic debris. 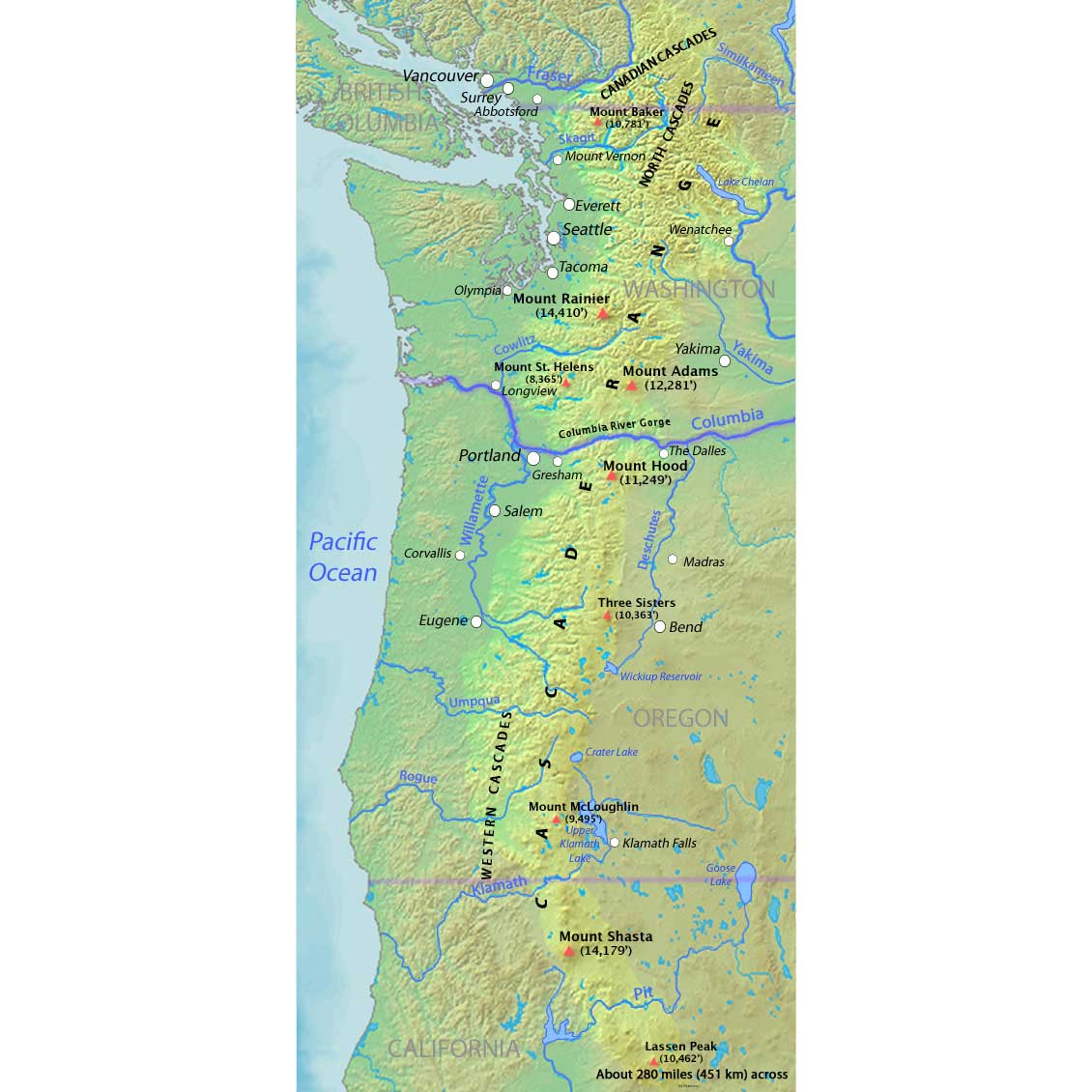 These volcanoes, the Cascade Volcanic Arc, arose due to the subduction of the Pacific plate beneath North America. As long as subduction continues, the Cascades will remain volcanically active.

The Cascades are primarily composed of volcanic igneous rock, the youngest of which is found in the active volcanoes of the High Cascades—strikingly large stratovolcanoes that rise high above the landscape of the range.

A stratovolcano is a conical volcano made up of many lava flows as well as layers of ash and breccia from explosive eruptions. In fact, stratovolcanoes are often characterized by their periodic violent eruptions, which occur due to their presence at subduction zones. While young stratovolcanoes tend to have steep cone shapes, the symmetrical conical shape is readily disfigured by massive eruptions, such as at Mt. Saint Helens in 1980. 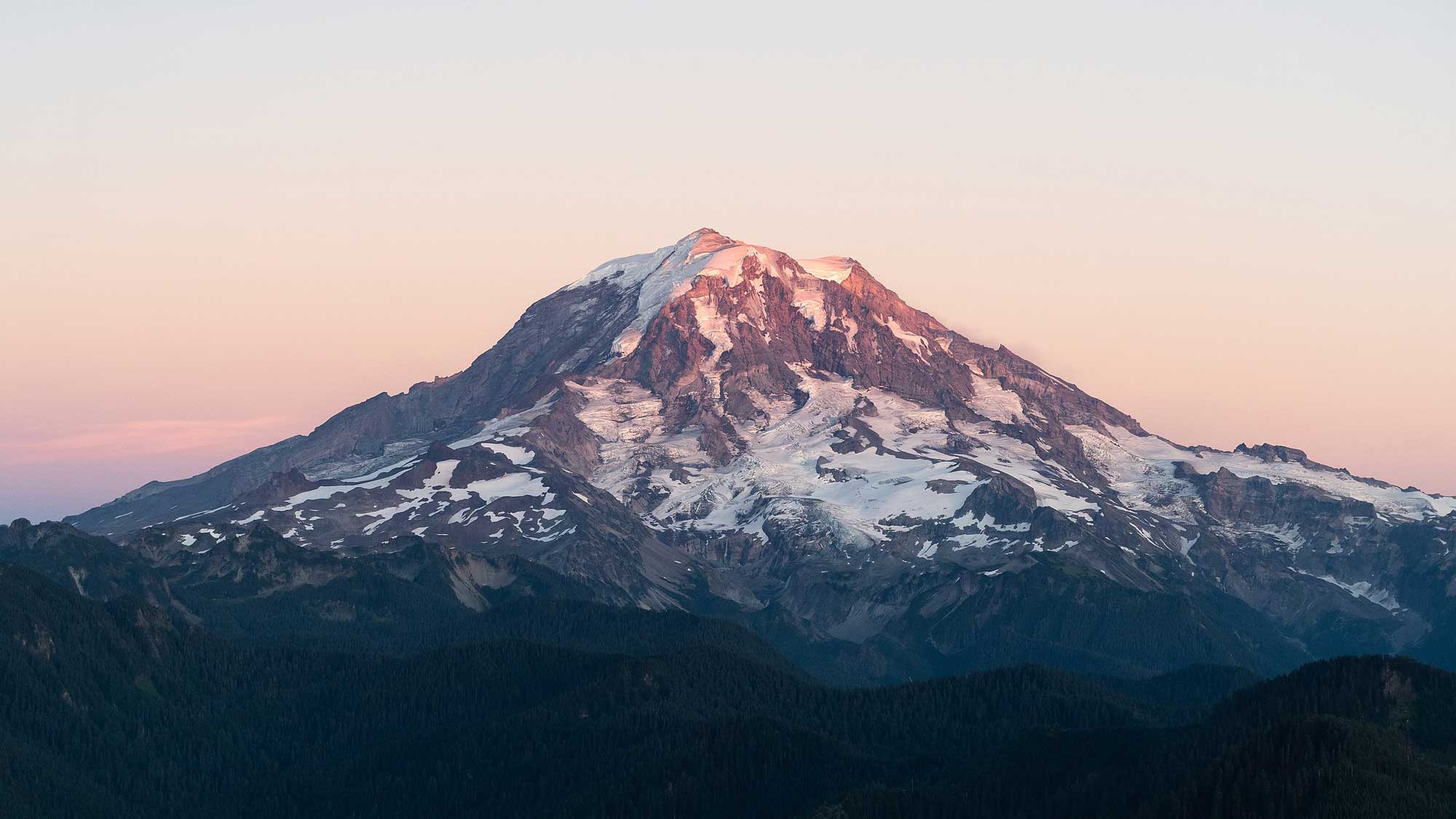 The most common rock produced by these volcanoes is andesite, a fine-grained rock of intermediate silica content. Another common rock is dacite, a gray volcanic rock that lies between andesite and rhyolite in terms of its silica content.

The Cascades also contain a few ancient shield volcanoes. A shield volcano has a low profile and gradual slope because it is made of lava flows that were more fluid than the “sticky” silica-rich lavas that build up stratovolcanoes. Newberry Volcano in Oregon is the widest volcano of the Cascades, with a diameter of 32 kilometers (20 miles). This broad shield volcano emitted a wide range of flows, ranging from basalt to rhyolite. The volcano’s caldera is thought to have first formed 500,000 years ago, when the original cone collapsed following a particularly large eruption that emptied the underlying magma chamber. Today, the caldera forms a lake that contains a few smaller volcanic cones as well as the Big Obsidian Flow, a 1300-year-old patch of volcanic glass that covers about 10 square kilometers (4 square miles). 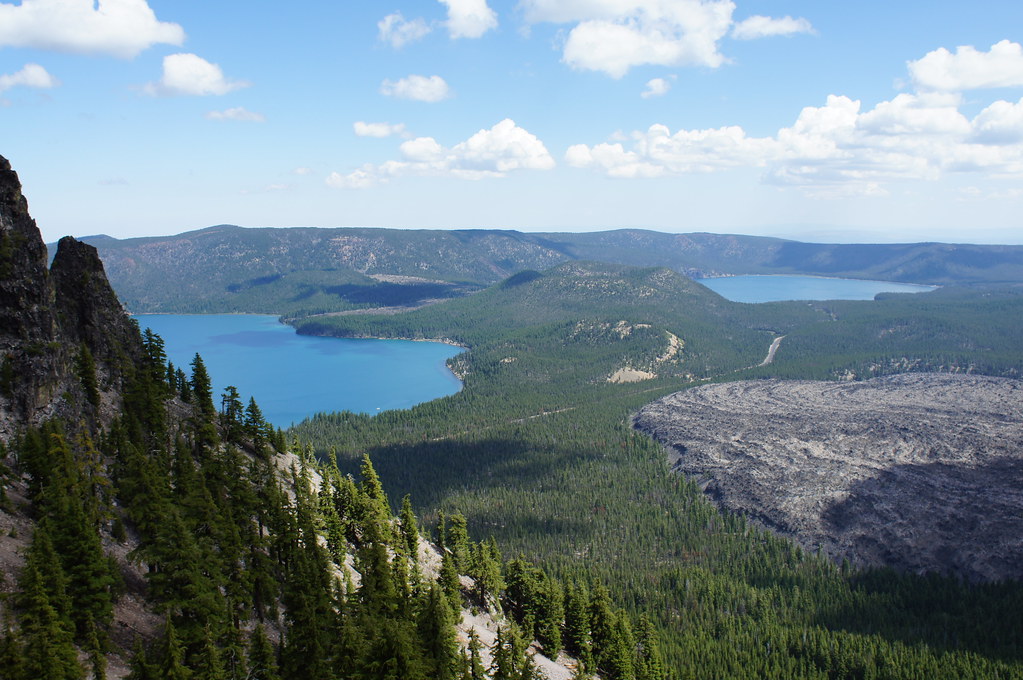 The obsidian from this flow was commonly used to make tools, and it has been traced to Native American sites all over the region. 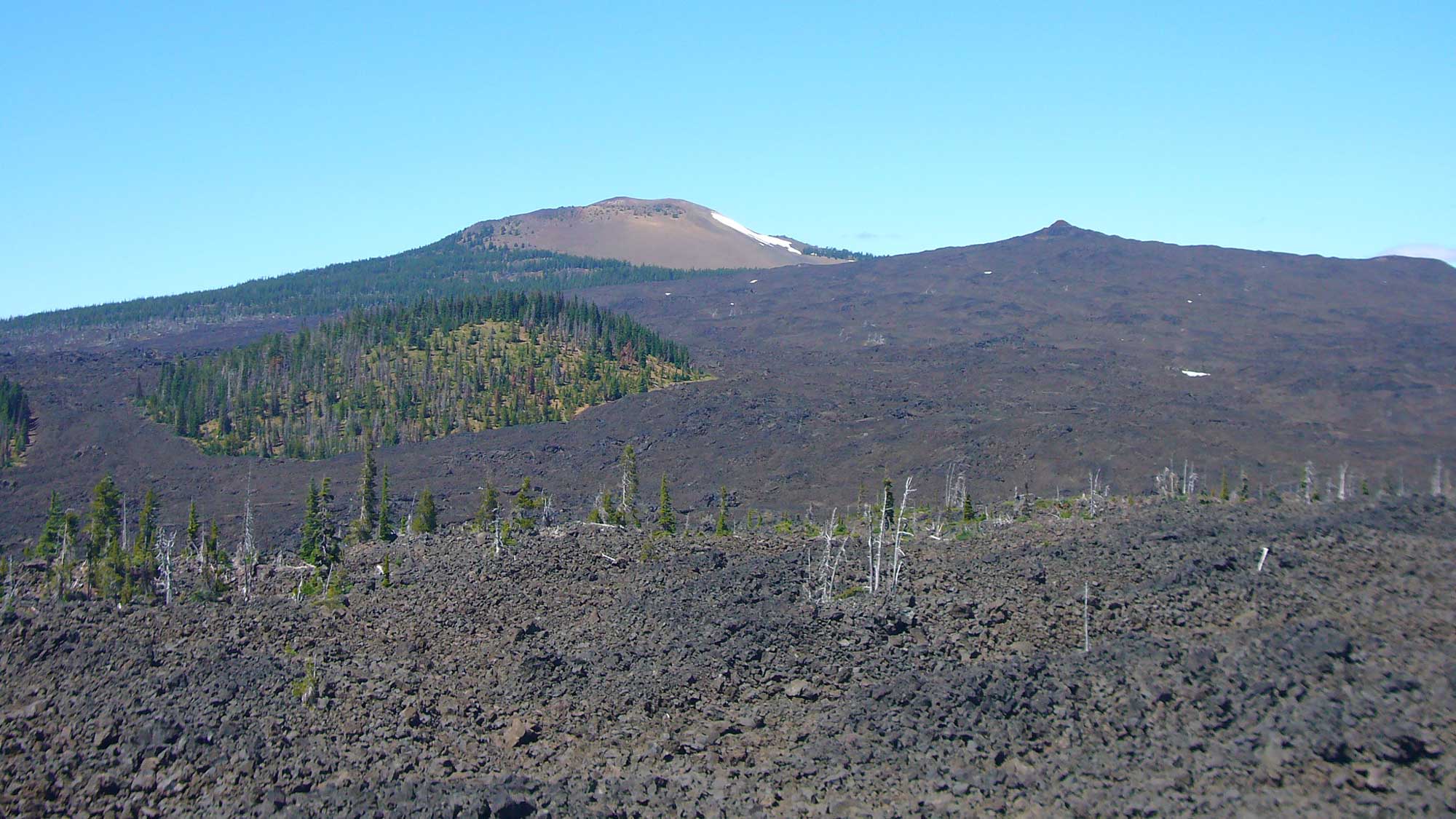 The North Cascade Range, although it has a few prominent volcanoes, is predominantly an uplifted block of accreted terranes. The collision that accreted these terranes created intense pressure, leading to metamorphic conditions that formed rocks such as slate, phyllite, schist, gneiss, and marble. Numerous magmatic intrusions left behind intrusive rocks such as granite, diorite, and gabbro, as well as causing contact metamorphism. The volcanoes of the North Cascades, such as Mt. Baker and Glacier Peak, are made of basalt and andesite as well as volcanic breccia, a pyroclastic rock composed of volcanic fragments from an explosive eruption. There are some sedimentary rocks in the North Cascades as well; the Methow Valley contains a thick layer of Cretaceous sedimentary rocks such as shale, sandstone, and conglomerate.