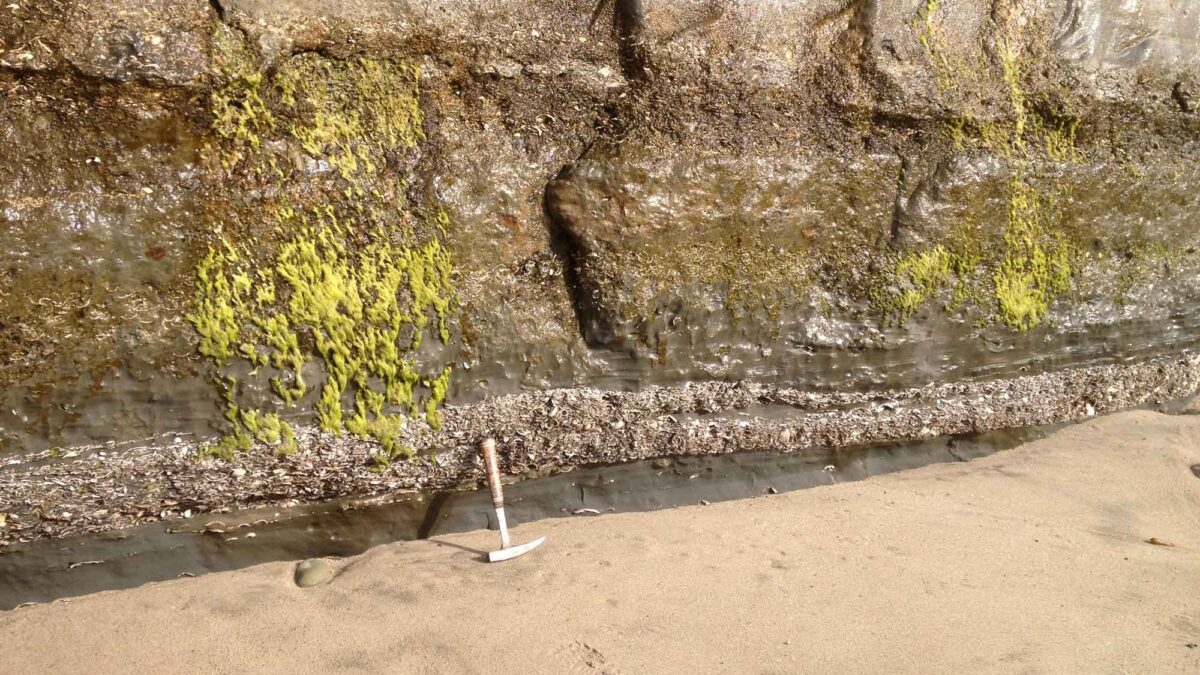 Spotlight: Overview of the rocks of the Pacific Border region of the western United States, including California, Oregon, and Washington.

Image above: Sedimentary rock of the Neogene-aged Purisima Formation near Capitola, California. Some of the strata are fossiliferous. Photograph by Jonathan R. Hendricks. 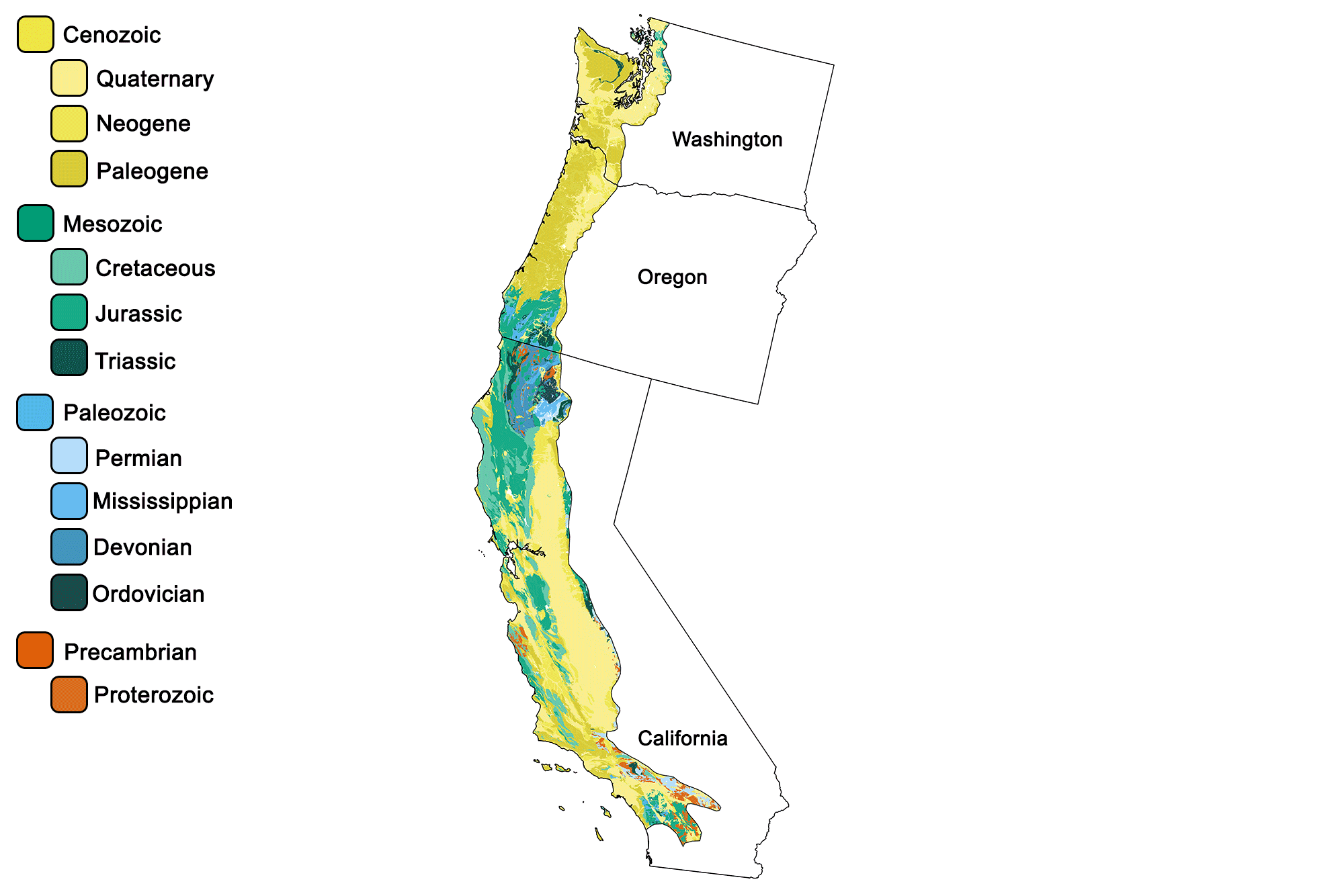 Stretching from Mexico to Alaska, the Pacific Border is a chaotic jumble of compressed land and ocean sediments, subducted plate scrapings, accreted terranes, and even errant pieces of ocean plate plastered against the western edge of the continent. Many different parts of the range contain a wide variety of rocks, but all of the ranges share one thing in common: they are the leading edge of an active plate boundary.

Southern California lost its subducting plate boundary 20 million years ago. The junction between the subducting Farallon plate and North America has been shifting northward, leaving the Pacific plate directly next to the North American plate. This new boundary is defined by the San Andreas Fault, a transform Boundary. 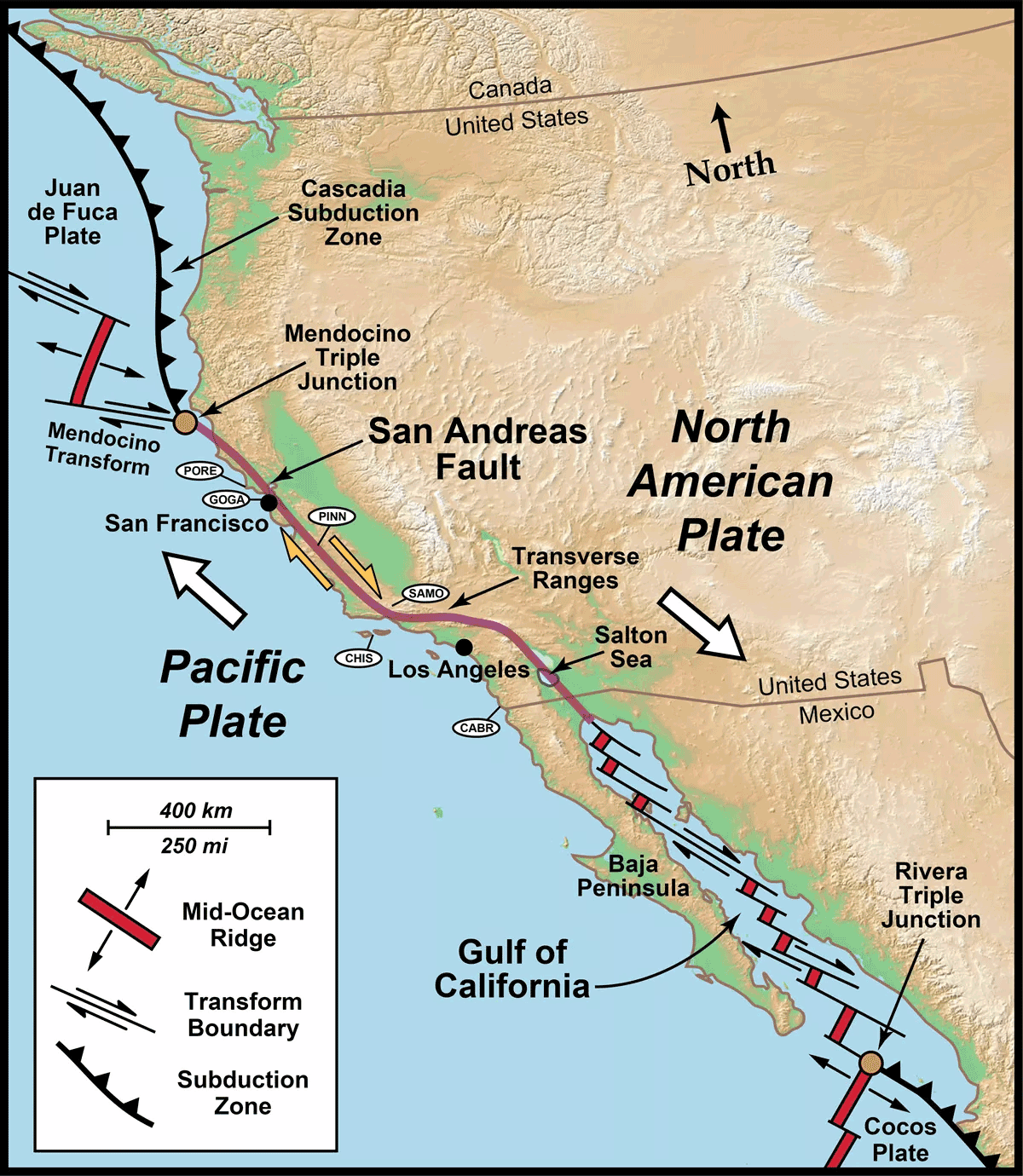 Evidence of past subduction can be found along the California coast in what is called the Franciscan Assemblage (or formation). Some parts of it are called a mélange, a mixture of fragmented rocks produced in a subduction zone. Approximately 90% of the Franciscan Assemblage is composed of greywacke, a form of sandstone deposited in deep marine basins by submarine landslides called turbidity currents. 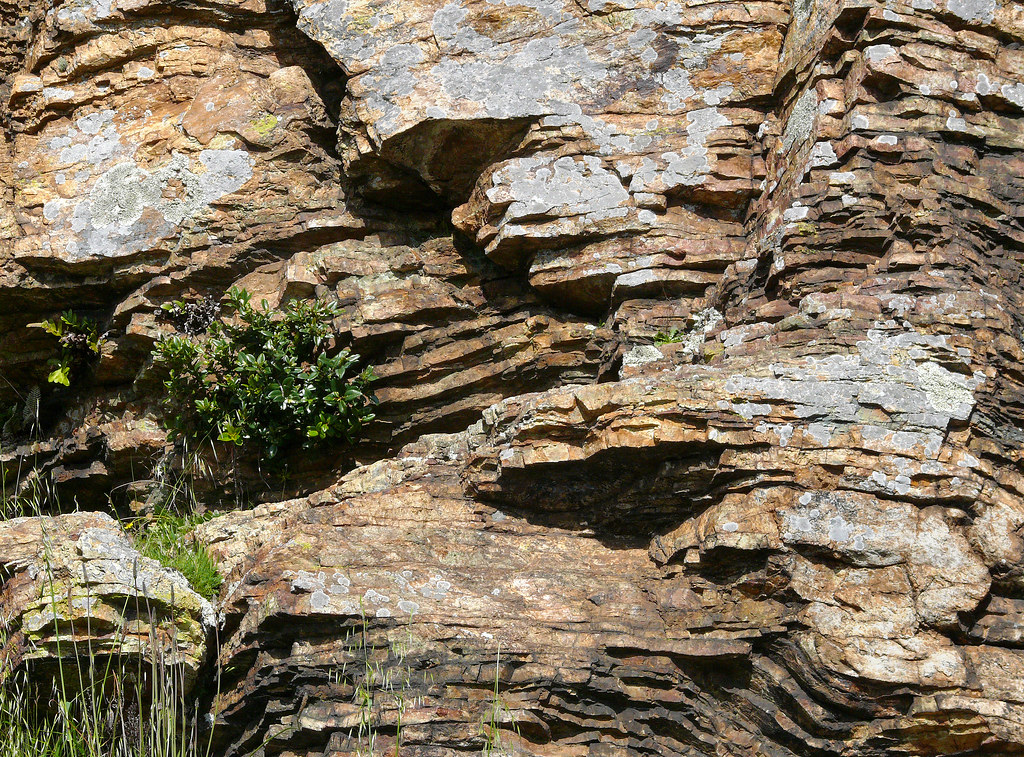 Turbidity currents are essentially submarine sediment avalanches. These fast-moving currents of sediment are often caused by earthquakes or other geological disturbances that loosen sediment on a continental shelf. The sediment rushes down the continental slope, picking up sediment and speed as it moves. The density of the sediment within the current gives it great force; turbidity currents have been reported to move at speeds of 100 kph (62 mph). These massive sediment flows have extreme erosive potential, and often carve out underwater canyons. In 1929, the Grand Banks earthquake off the coast of Newfoundland generated a turbidity current that traveled more than 600 kilometers (370 miles) and snapped twelve different transatlantic cables.

Turbidity currents deposit huge amounts of sediment during their flow; such deposits are called turbidites. Turbidite sediments are deposited in a graded pattern, with the largest particles at the bottom (as they are the heaviest, and detach from the flow more quickly) and smaller particles on top. Turbidites commonly form in a shape called an abyssal fan, which spreads out in a wide teardrop shape from the source. Because of the rate at which turbidity currents deposit dense sediments, they are often responsible for the effective preservation of many fossil organisms, which are swept up from shallow marine environments and buried in the deep sea. 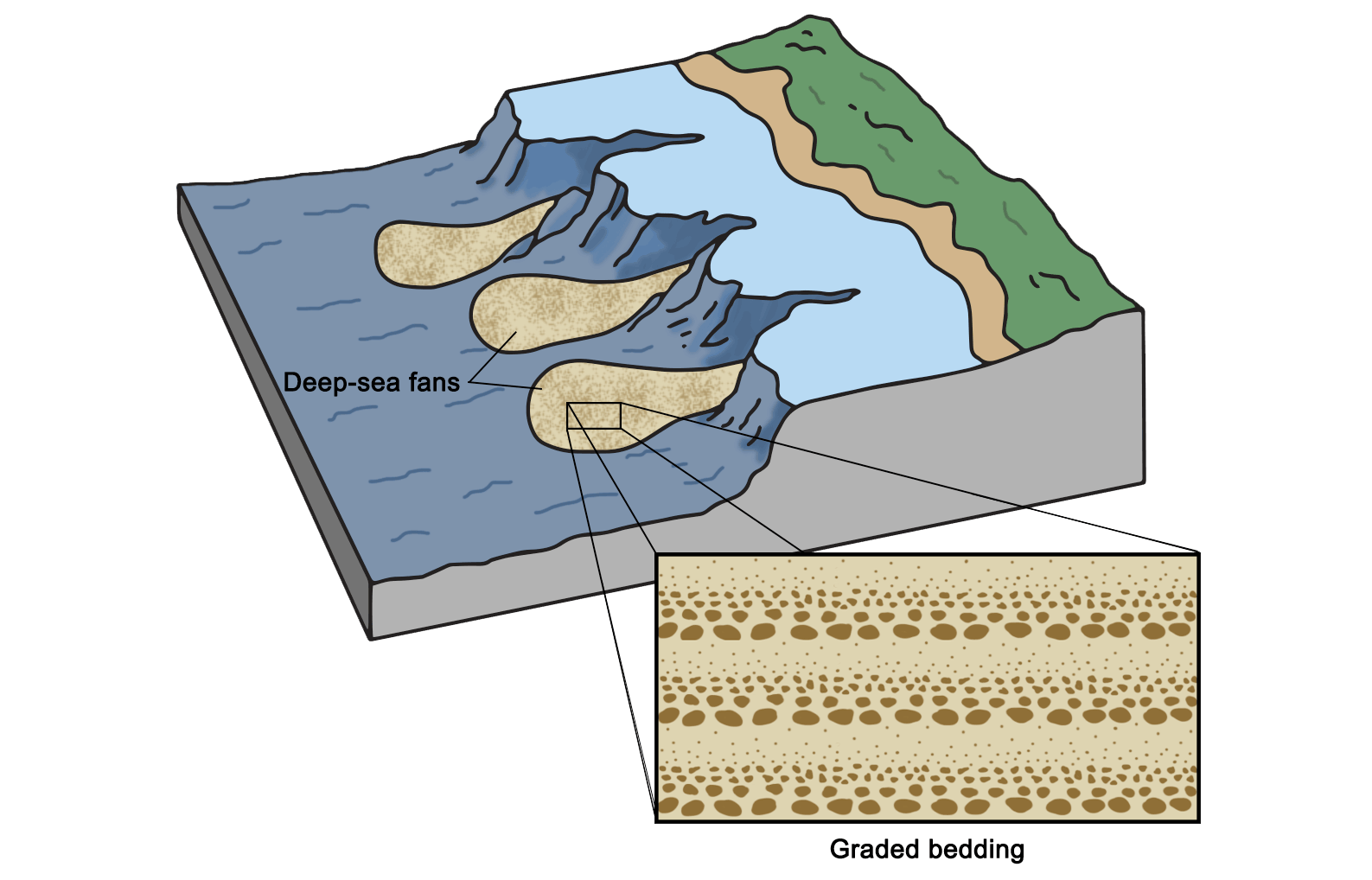 The dark-colored rock of the Franciscan Assemblage has layers that transition from coarse grains to fine grains as a result of the submarine turbidity currents coming to rest. The Franciscan Assemblage has also been intruded by serpentinite, a metamorphic rock formed when peridotite from the subducting plate reacts with water, producing a light, slippery, green rock.

The rocks of the Franciscan Assemblage stand in stark contrast to the Salinian block, a terrane that contains granite as well as metamorphic rocks such as gneiss, schist, quartzite, and marble. The Salinian block is a segment of the continental crust that has been moving northwest along the west side of the San Andreas Fault. 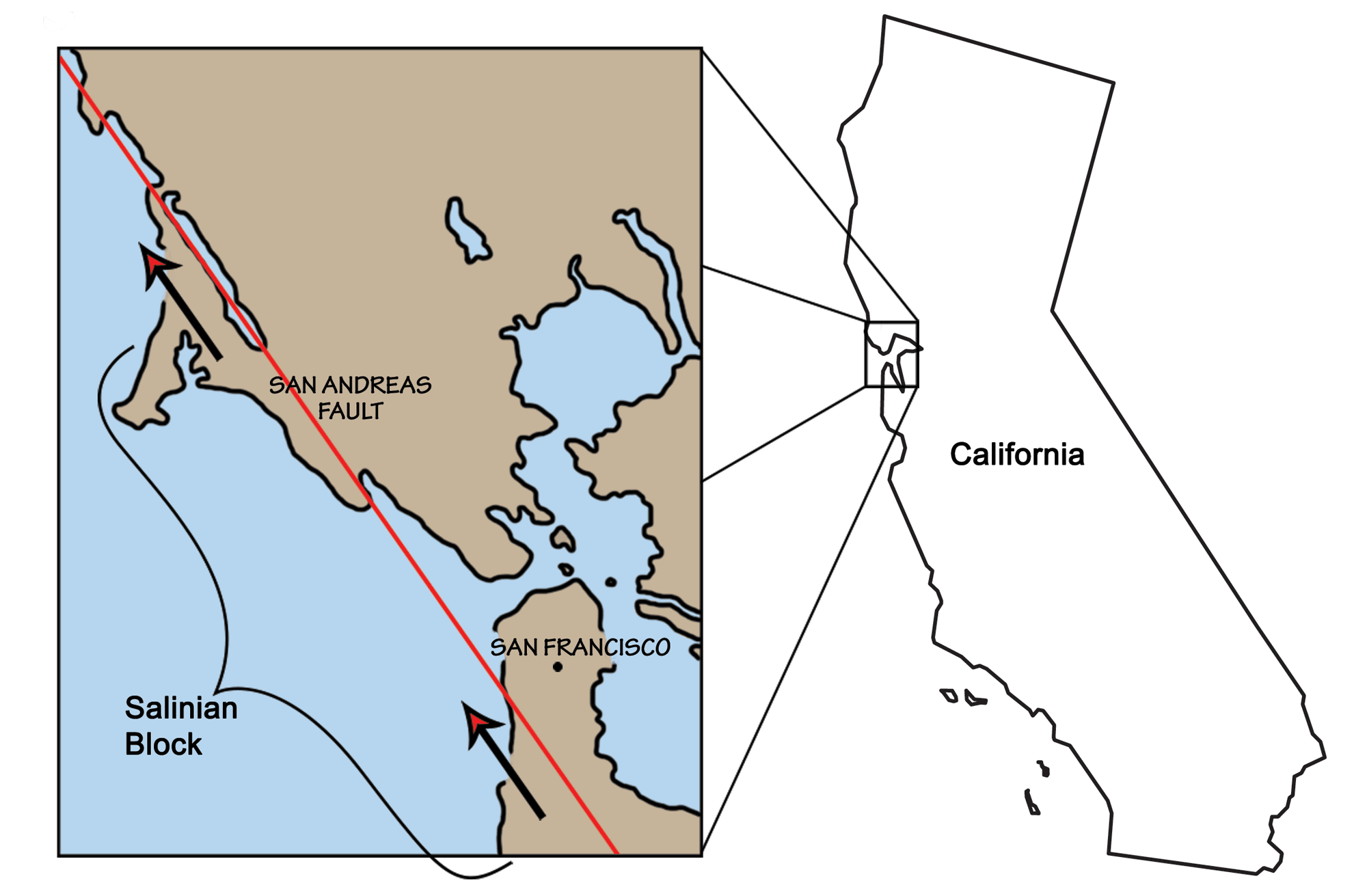 Geography of the Salinian block. Image by Wade Greenberg-Brand, modified for the [email protected] project.

It was once an extension of the southern Sierra Nevada, but it was captured by the Pacific plate. It can be clearly seen at Point Reyes National Park, where it is separated from the Franciscan mélange by Tomales Bay.

Occasionally, a subducting oceanic plate will fracture and leave behind a slice of oceanic crust on land. The resulting rock sequences, called ophiolites (parts of accretionary wedges), are the most helpful tool we have for studying oceanic crust. 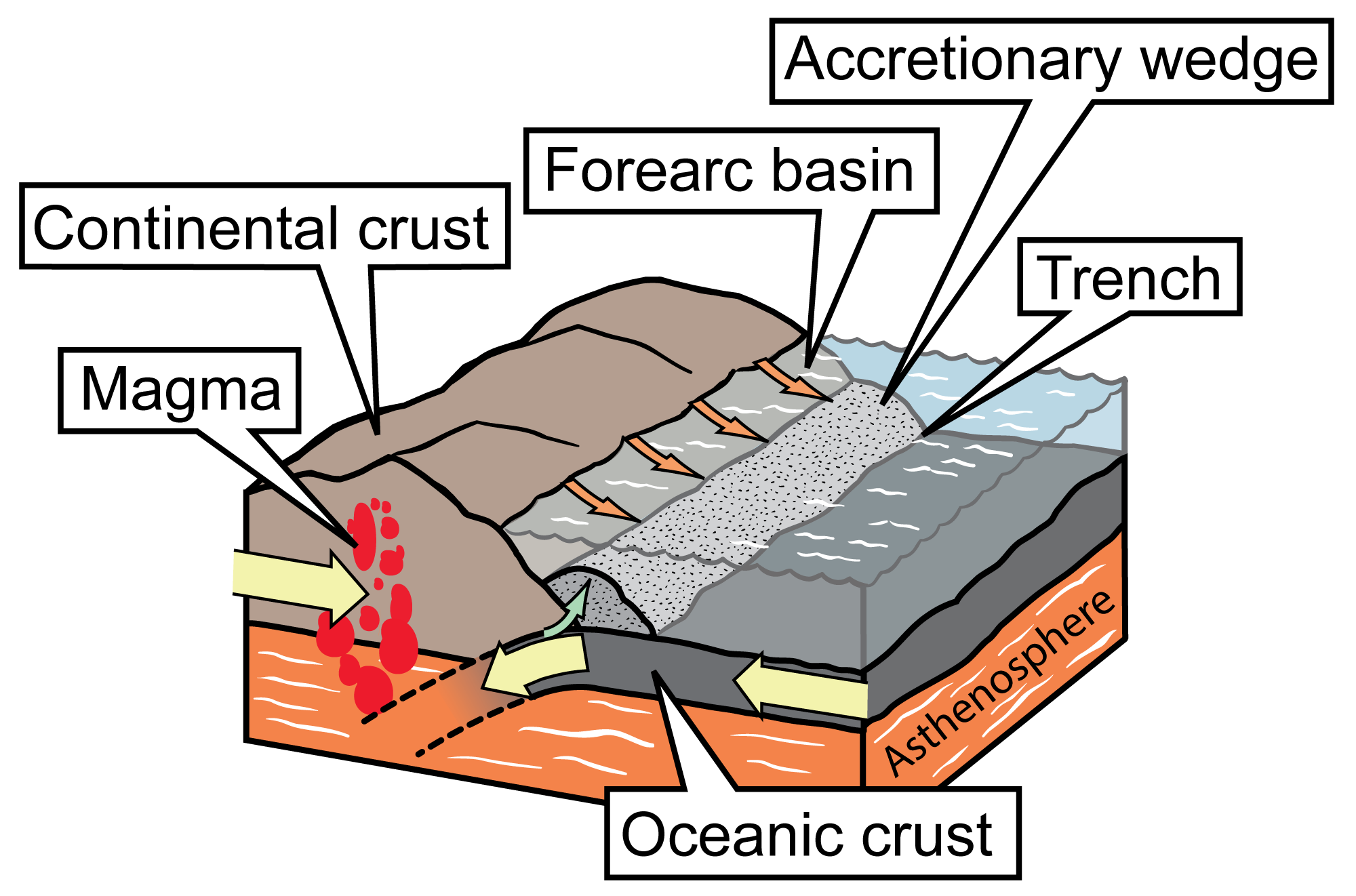 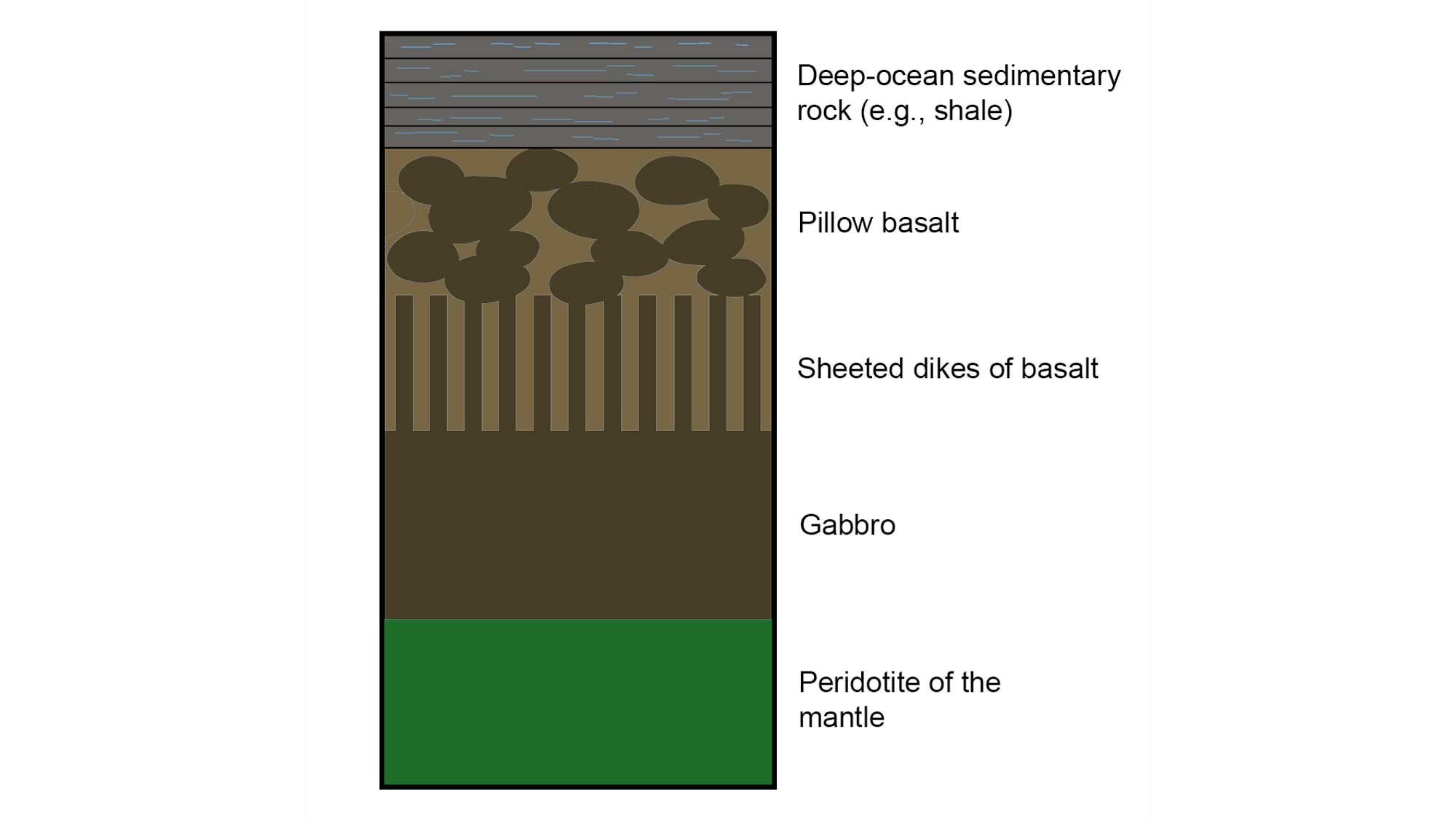 Structure of an ophiolite sequence. Image by Wendy Van Norden, modified for the [email protected] project.

The top of the crust contains deep-sea sedimentary rock, such as chert. Below that are pillow basalts that were extruded into the water at a mid-ocean ridge. Below the pillow basalts are intrusions of basalt known as sheeted dikes, formed as the midocean ridge pulled apart. Below the basalt is gabbro, the plutonic version of basalt, and finally peridotite, the rock that composes the Earth’s mantle. Ophiolites are among the only places where mantle rock can be seen on the Earth’s surface. Ophiolite sequences can be found exposed at the Golden Gate National Park, Cuesta Ridge (near San Luis Obispo), and in the western Klamath Mountains.

The Monterey Formation is a distinctive light-colored sedimentary rock unit that formed in the Miocene seas. Its buff color comes from its high silica content. Outcrops from the Monterey Formation are visible along California’s coast and peninsula, and on some of the offshore islands. It is composed primarily of shale, and it is the source rock for most of California’s oil. Oil shale like this tends to form when deposition occurs on top of thick algal beds—the sediment layers then trap the oil that forms from the decomposing organic matter. 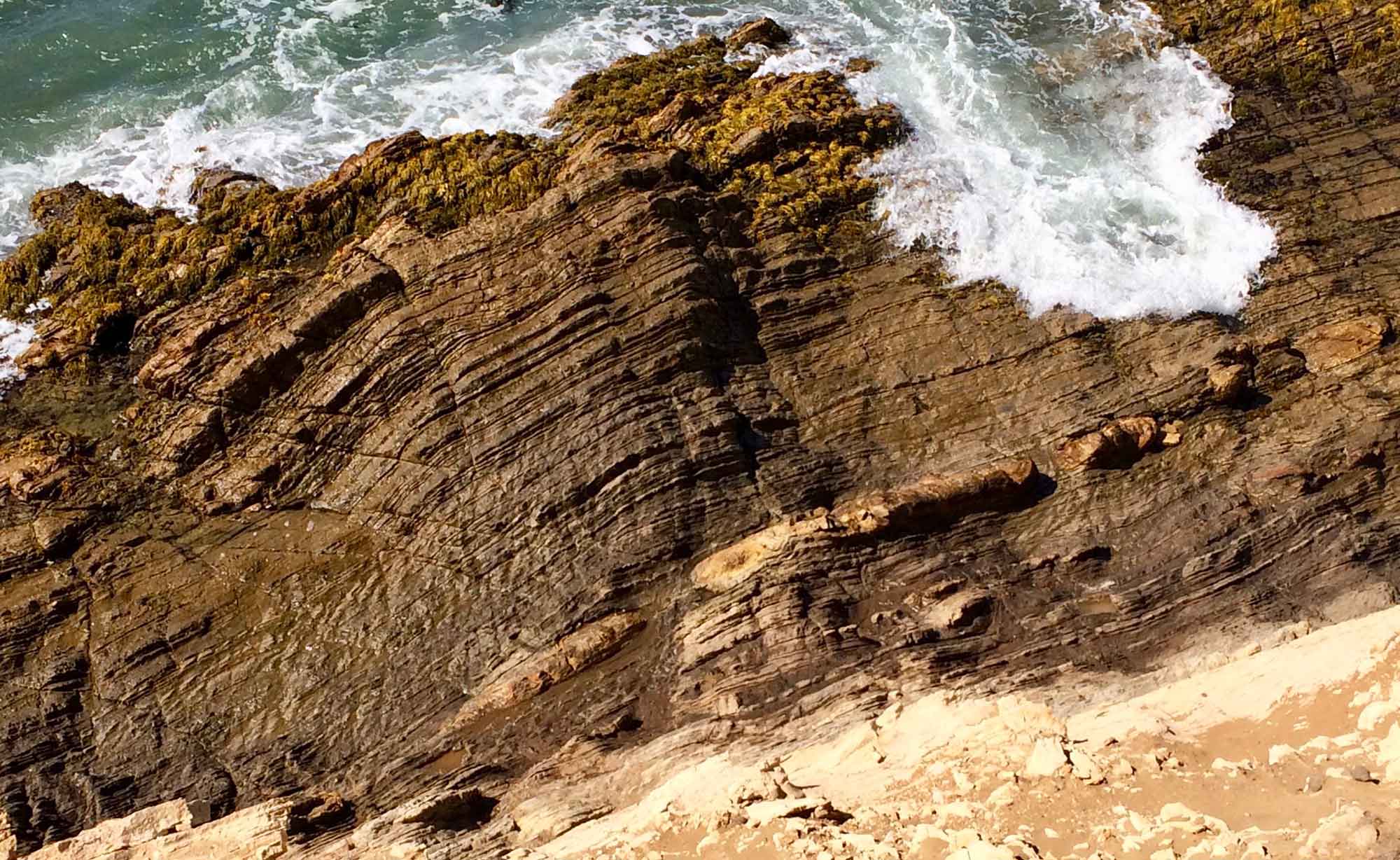 The Juan de Fuca plate is still subducting along Northern California, Washington, and Oregon. The Oregon Coast Range, which overlies this subduction zone, extends for 320 kilometers (200 miles) from the Washington-Oregon border south to the Coquille River. 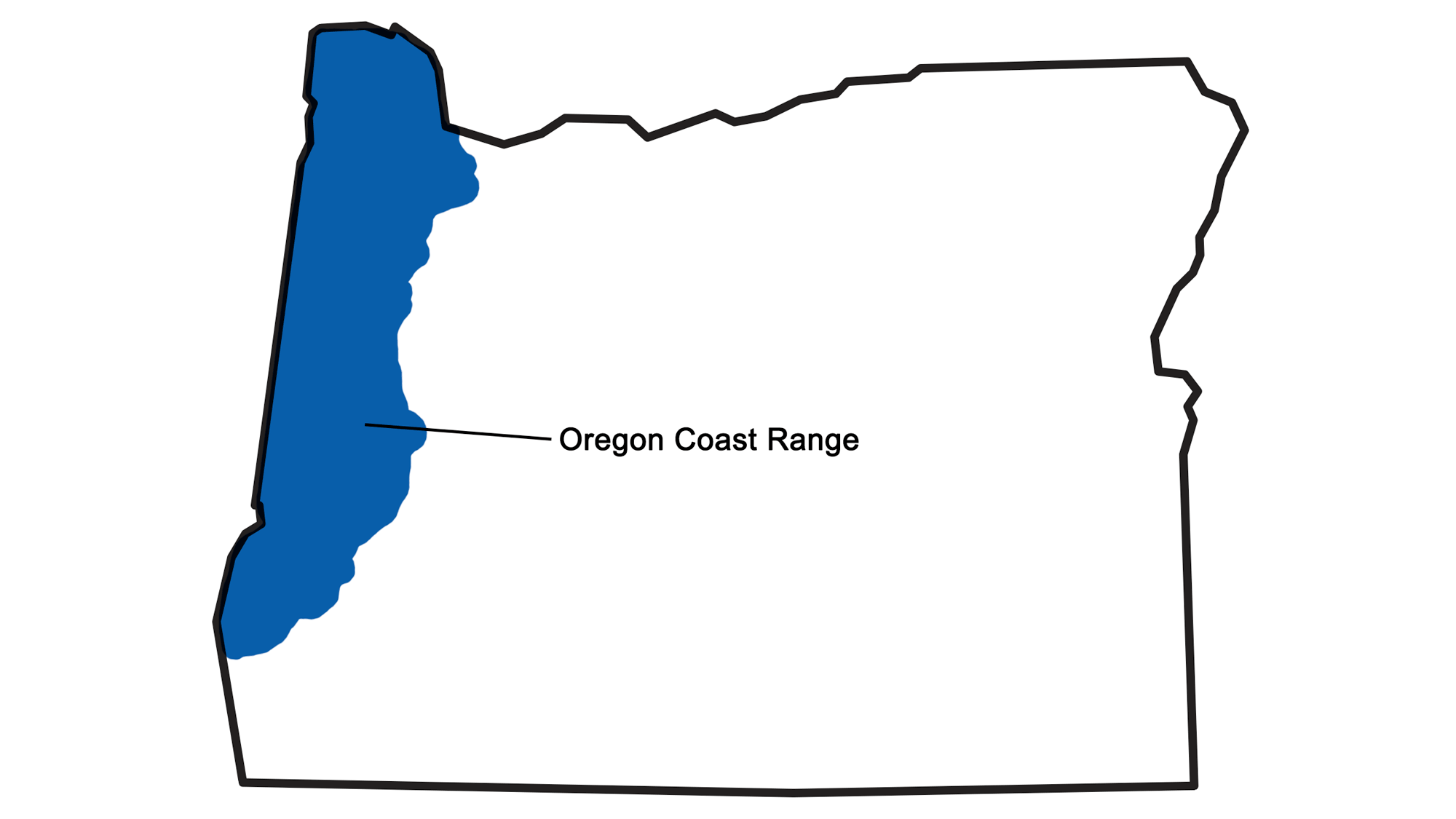 Extent of the Oregon Coast Range. Image by Wade Greenberg-Brand, modified for the [email protected] project.

These mountains began to form 66 million years ago during the Cretaceous, when a series of offshore volcanic islands were pushed into the North American plate. The collision forced undersea basalt formations and sediment terraces upward, and these deposits now underlie the Southern and Central parts of the Coast Range. During the Eocene, the Siletz River Volcanics—basaltic pillow lavas and other lava flows that formed in submarine volcanoes present on the subducting plate—were added to the range. Lastly, basalt from the edge of the Columbia Basin basalt flow added further material to the range.

The Northern portion of the Oregon Coast Range, though it still contains the same basaltic core as the range’s more southern portions, tells a slightly different geologic story. Portions of this area contain marine sedimentary rock, uplifted by the subducting Juan de Fuca plate. Sandstone, mudstone, siltstone, and shale are common rocks here, and marine fossils also appear in some areas. Heavy rainfall has contributed to the erosion of much of the landscape, leading to the formation of steep slopes and deep valleys.

In Washington State, the coastal region is made up of the Olympic Peninsula, a large arm of land that juts out into the Pacific Ocean. The Olympic Mountains, an extension of Oregon’s Coast Range, form the Peninsula’s core. These mountains formed in the same way as the Coast Range, and are underlain by a very similar basalt formation called the Crescent Formation.

Formation of the Olympic Peninsula and Mountains. Adapted from image by the National Park Service (public domain).

As convergence of the Juan de Fuca plate accelerated in the middle Miocene, a variety of sedimentary, metamorphic, and volcanic rocks accreting to the Olympics were chaotically jumbled to form a mélange called the Hoh rock assemblage. These rocks are exposed along 72 kilometers (45 miles) of Washington’s Olympic Coast.

During the Pleistocene, continental ice sheets sculpted the Olympic Mountains, leading to the formation of U-shaped valleys and the deposition of many granitic glacial erratics.