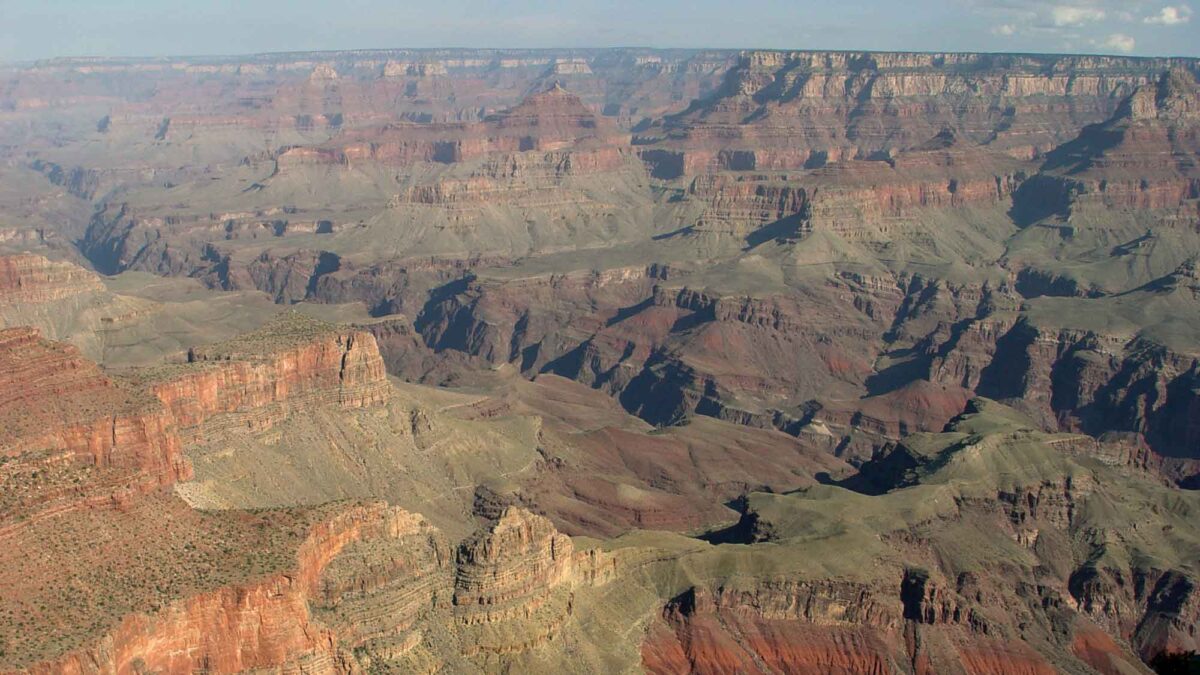 The Grand Canyon records nearly 2 billion years of Earth’s history. This history began in the Precambrian with tectonic collisions over 1.7 billion years ago. Sedimentary rocks were deposited—and in some cases, eroded away—over hundreds of millions of years during the late Precambrian and subsequent Paleozoic Era. These sedimentary rock layers record both changing environments and types of life. Uplift of the Colorado Plateau about 8 million years ago caused the Colorado River to begin cutting into this sedimentary bedrock, forming the modern Grand Canyon itself. During the past 1 million years, occasional volcanic eruptions have occurred near the Grand Canyon, some of which produced lava flows that temporarily dammed the Colorado River.

The Colorado Plateau and Colorado River

The Grand Canyon rests upon a region of the southwestern United States called the Colorado Plateau. 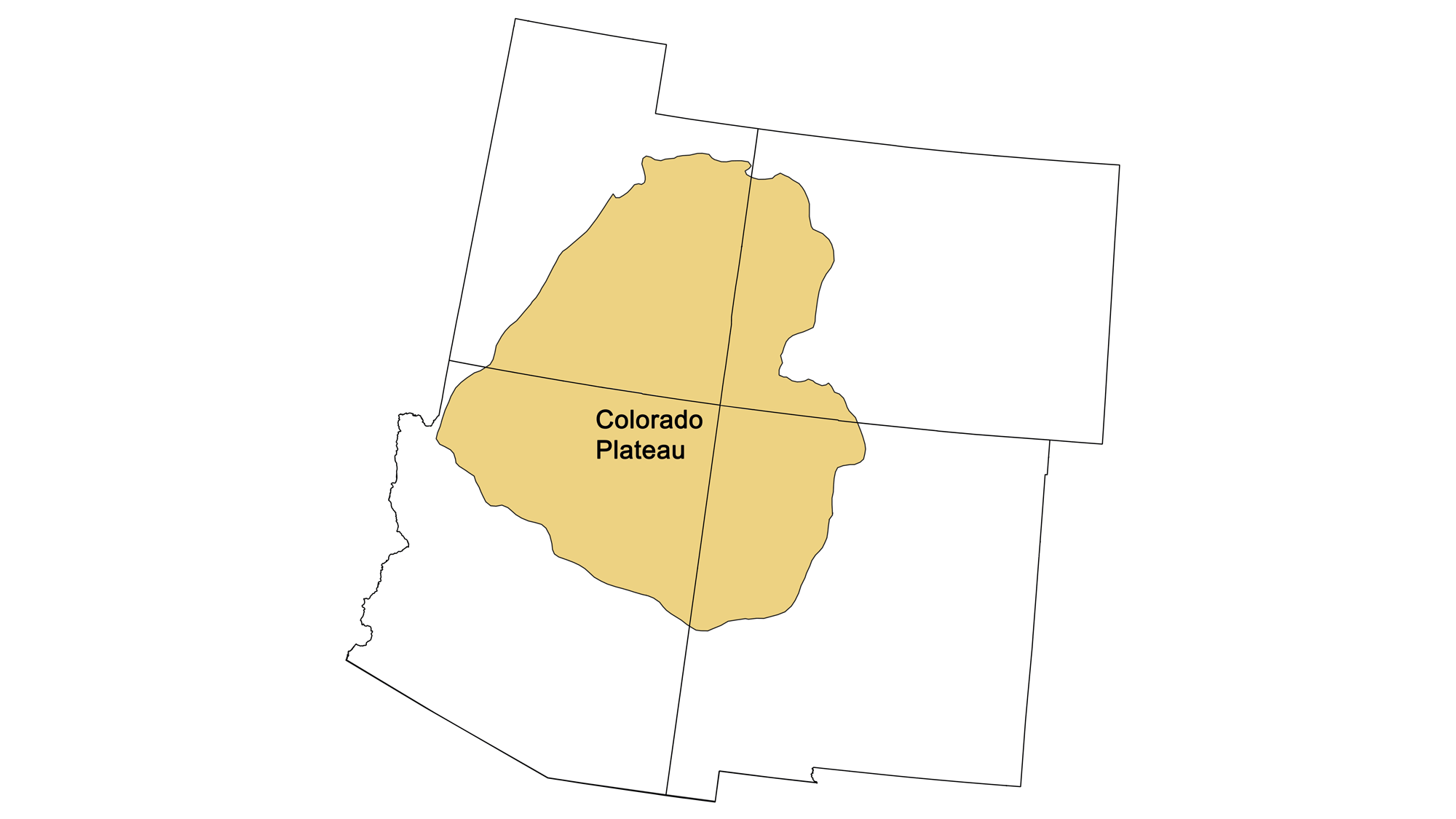 The Colorado Plateau covers an area of approximately 335,000 square kilometers (130,000 square miles) close to the center of the Southwest. It is the one region located in all four states, whose borders intersect at the “four corners” near the center of the plateau. It is bordered by the Colorado Rockies in the northeast, the Uinta Mountains in the northwest, and the Basin and Range (including the Rio Grande Rift) along the west, southwest, and southeast. Although the Colorado Plateau is largely semi-arid, the Colorado River and its tributaries access considerable runoff from snowmelt and rain in the Rocky Mountains to the north and east. 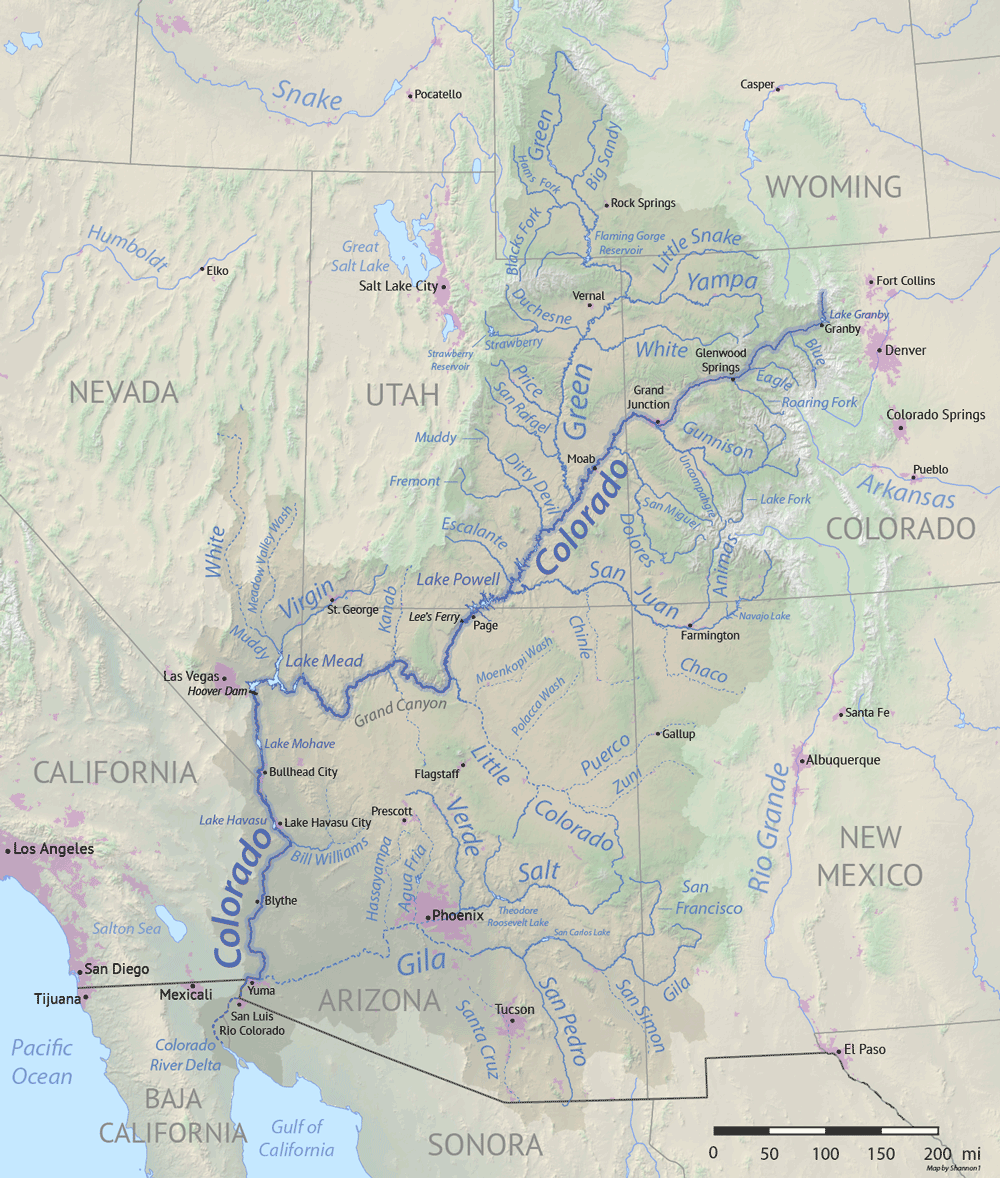 These rivers and streams have carved numerous canyons throughout the region, culminating in the grandest of canyons on Earth.

The Colorado Plateau is underlain by Precambrian basement rock, which is exposed in the deep gorge of the Grand Canyon. The schists and gneisses found at the base of the Grand Canyon, are 1.9 to 1.7 billion years old and comprise metamorphosed volcanic and marine sedimentary rocks. These rocks are the product of plate tectonic activity from the collision and accretion of a volcanic island arc, the Yavapai terrane, with what was then a much smaller North American continent. Igneous rock bodies, such as the Zoroaster Granite were intruded into the plate at approximately the same time. These ancient rocks are overlain by a thick sequence of mildly metamorphosed sedimentary layers known as the Grand Canyon Supergroup, a series of sandstones, shales, and limestones that constitutes one of the most complete middle-to-late Proterozoic geologic records in North America.

Explore the Geologic Time Scale
How do scientists date rocks and fossils? 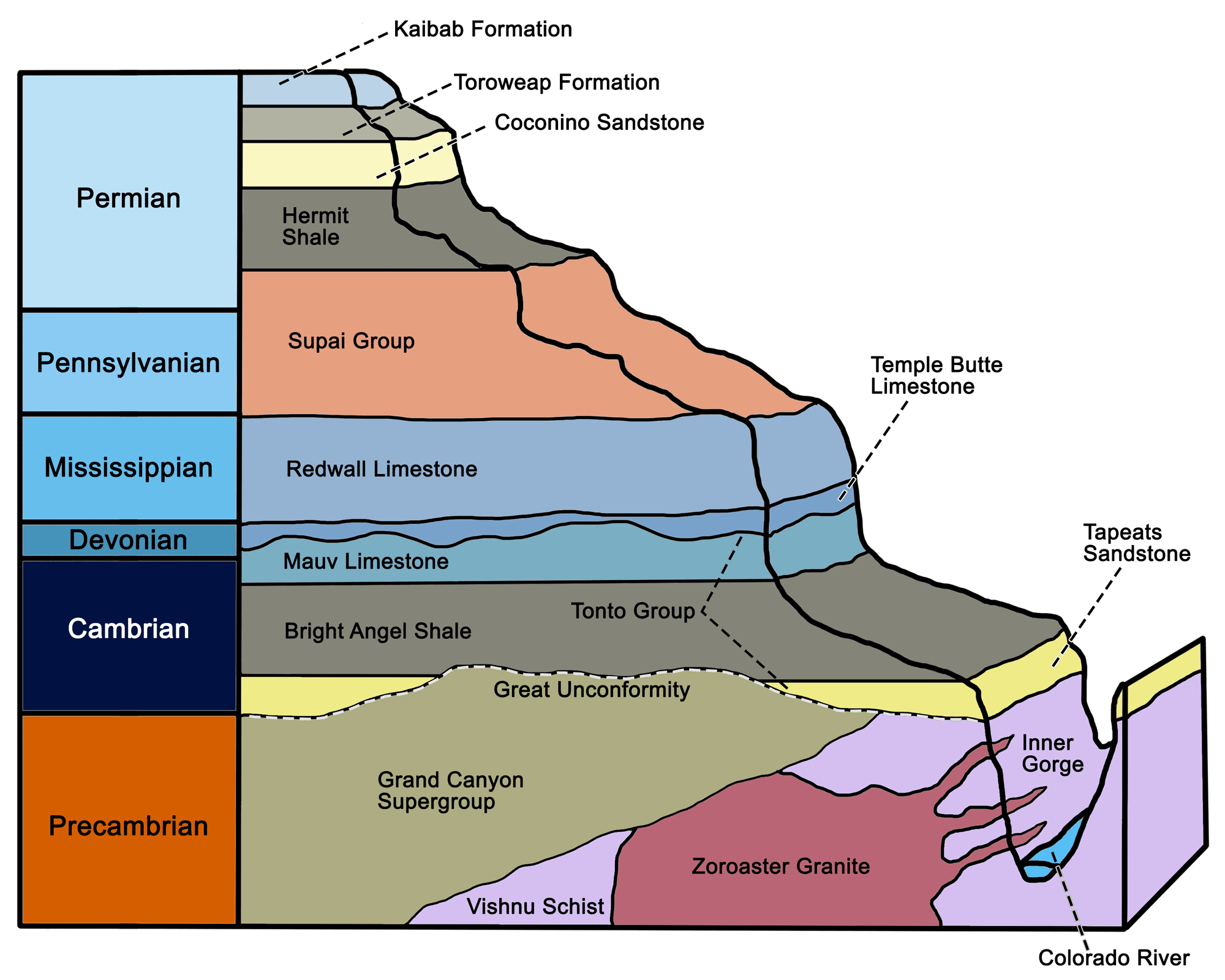 Major Precambrian and Paleozoic stratigraphic units of the Grand Canyon and Colorado Plateau. Image by Wade Greenberg-Brand, modified for the [email protected] project.

These rocks were generated approximately 1.2 to 1.1 billion years ago during the formation of the supercontinent Rodinia, when they were compressed from sedimentary layers originally deposited in fluvial and shallow marine environments. 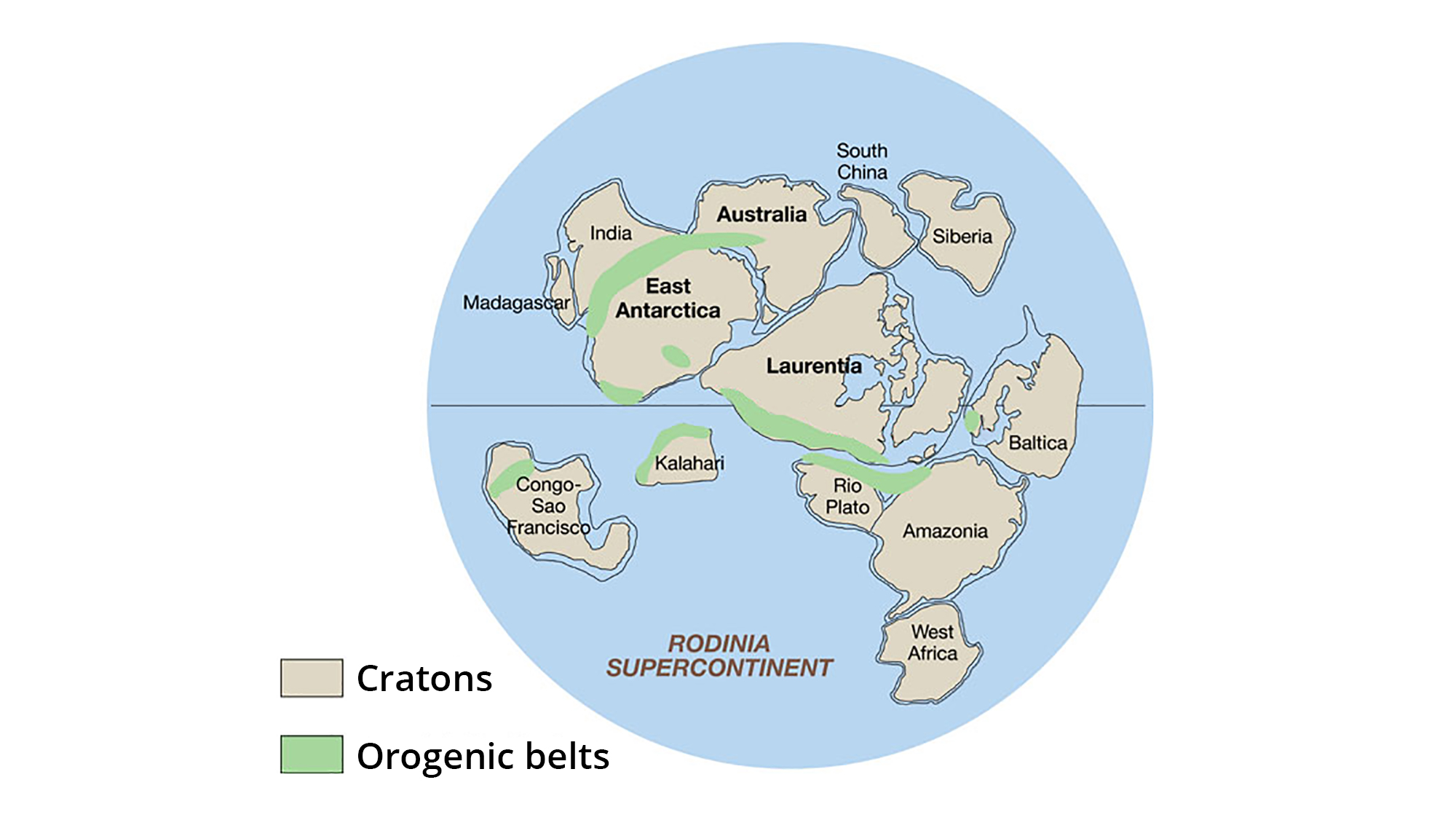 Basalt sills and dikes were intruded throughout the Grand Canyon Supergroup as a result of volcanic activity during the late Proterozoic. 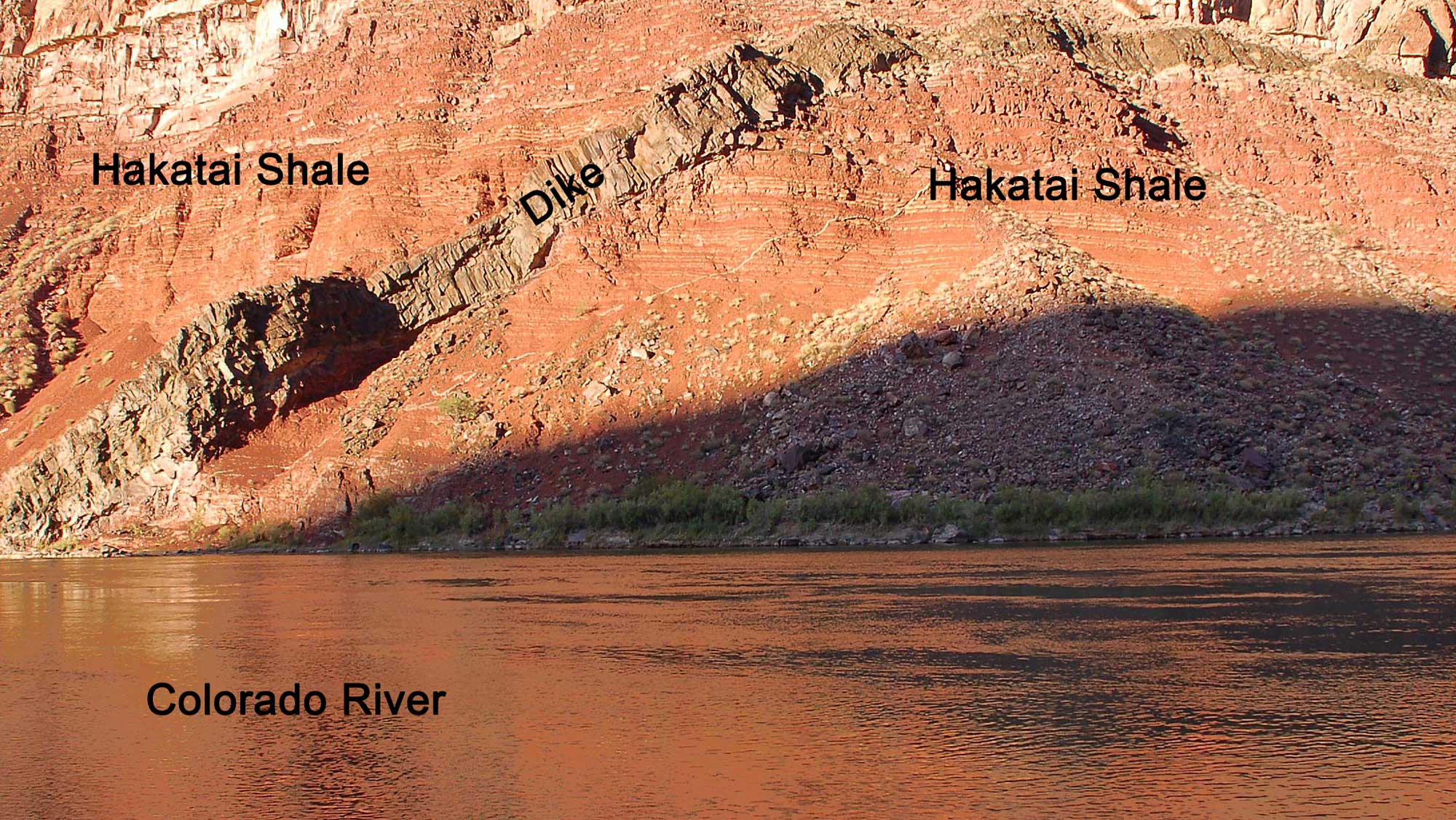 The oldest fossils known from the Grand Canyon are stromatolites, which are layered domes of carbonate sediment formed by mats of photosynthetic bacteria known as cyanobacteria. These are found in a layer called the Bass Limestone, exposed near the bottom of the Grand Canyon. The stromatolites date to the mid-Proterozoic, around 1.2 billion years ago. 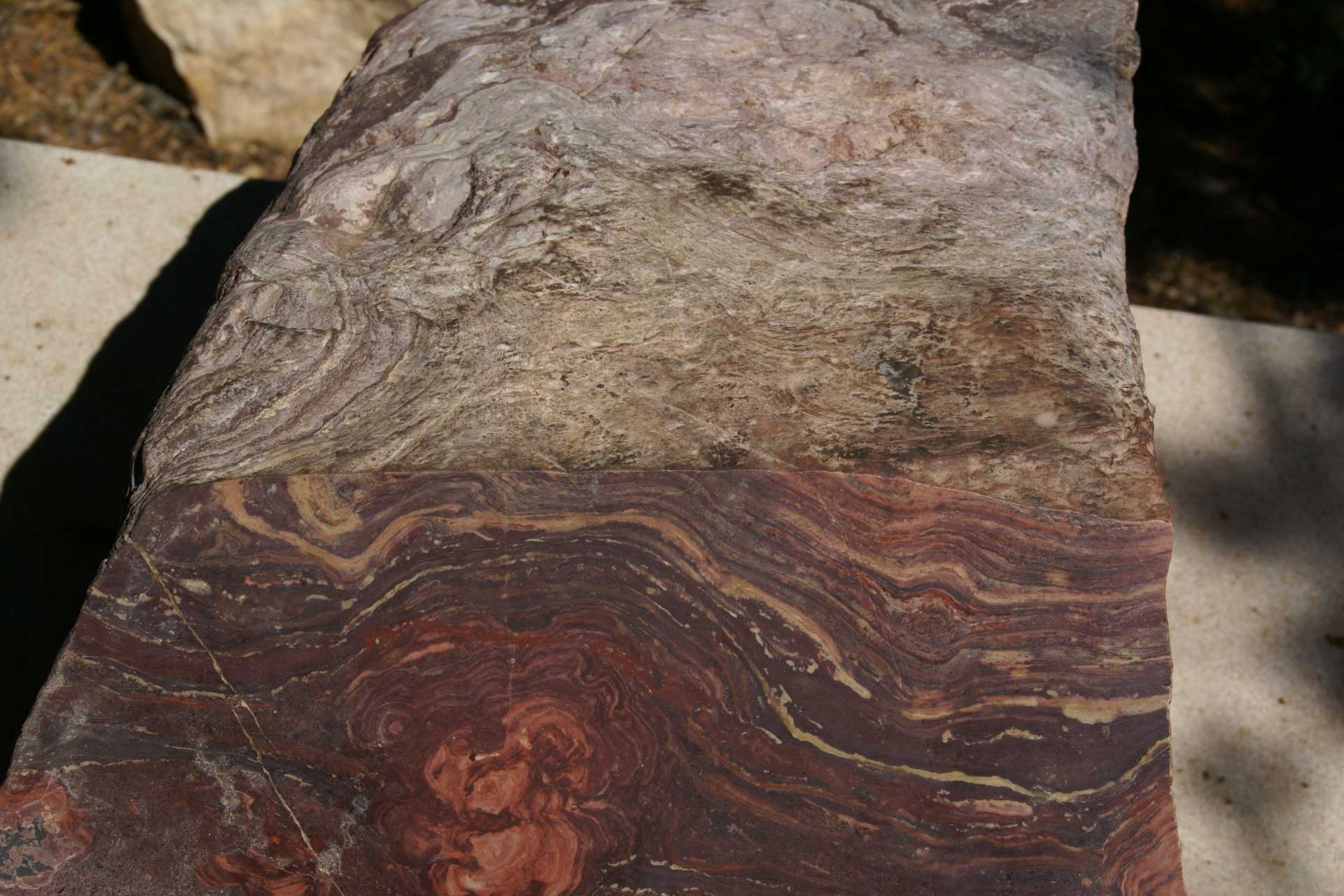 Overlying the uppermost layers of the Grand Canyon Supergroup is one of the most conspicuous features of the rocks in the Grand Canyon, an irregular level called “the Great Unconformity.” 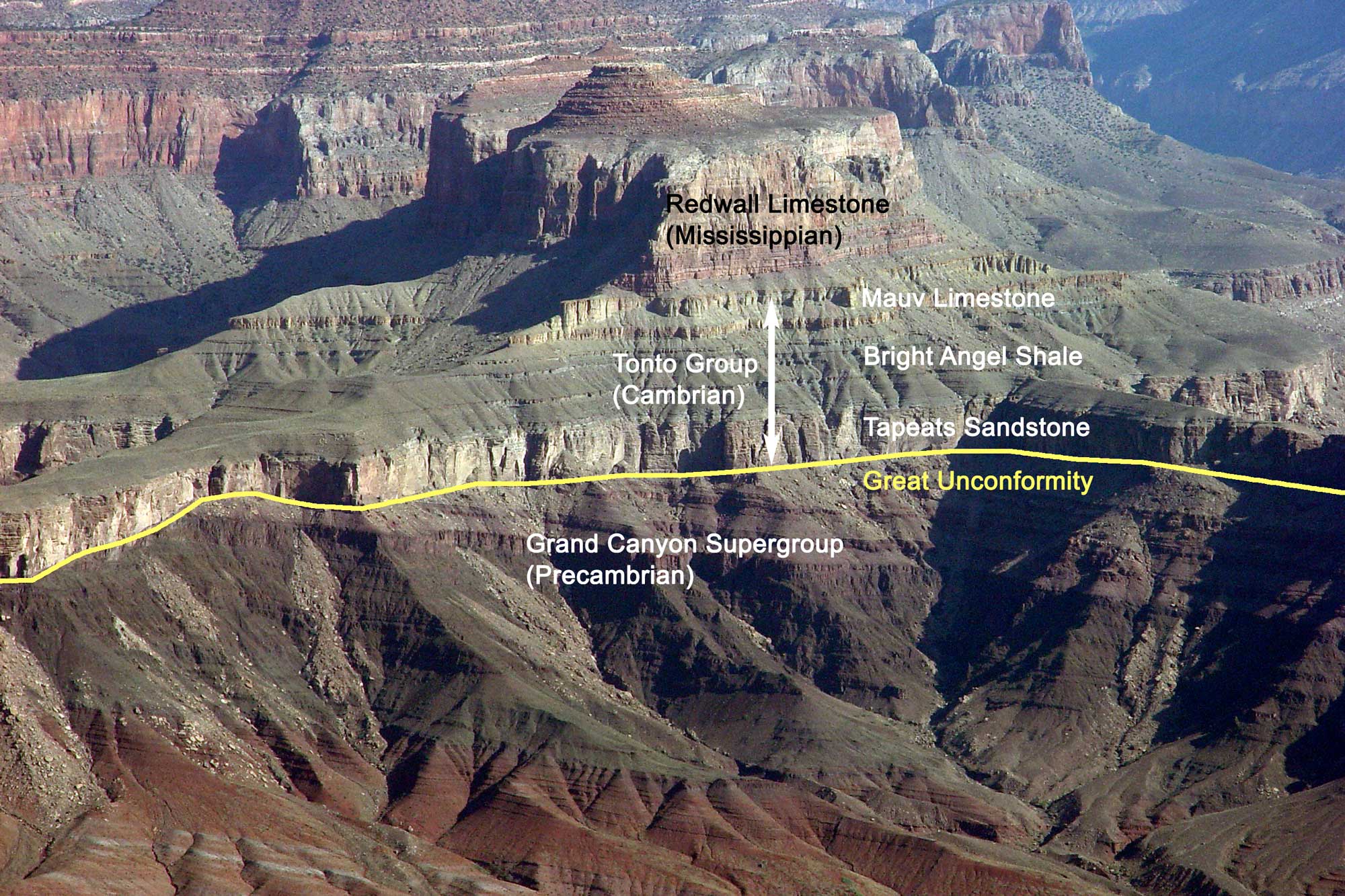 The Great Unconformity (marked by the line) in the Grand Canyon, Arizona, where the horizontal Tonto Group (Cambrian) overlies the tilted Grand Canyon Supergroup (Proterozoic). Image by Jonathan R. Hendricks for the [email protected] project.

This feature preserves a gap in the geological record where stratified layers have been interrupted or destroyed due to erosion or deformation. The unconformity separates rocks of Precambrian age from those of the Paleozoic Era, and is part of a continent-wide feature that extends across the ancient core of North America. The length of time represented by the Great Unconformity varies along its length—in some parts of the Grand Canyon, a period of 175 million years is “missing” between the Cambrian Tonto Group sandstones and the Grand Canyon Supergroup. In other places, there is a gap of over 1.2 billion years where the 550-million-yearold Tapeats Sandstone rests on 1.7-billion-year-old basement rock. The Great Unconformity is one of the most widely recognized and distinctive stratigraphic surfaces in the entire rock record.

Geologists are still unsure of the exact origin of the Great Unconformity, but it may have been caused by a major episode of continental uplift following the formation of the North American craton. This uplift would have exposed the continent—then completely barren of life—to extensive erosion for hundreds of millions of years before it was submerged by a shallow sea in the Cambrian, allowing deposition, and the recording of geologic time, to resume.

The Colorado Plateau is perhaps the best place to examine a nearly continuous sequence of representative Southwestern sedimentary layers. From near the bottom of the Grand Canyon, up through younger layers observed farther east, these rocks tell much of the story of the Paleozoic Era. 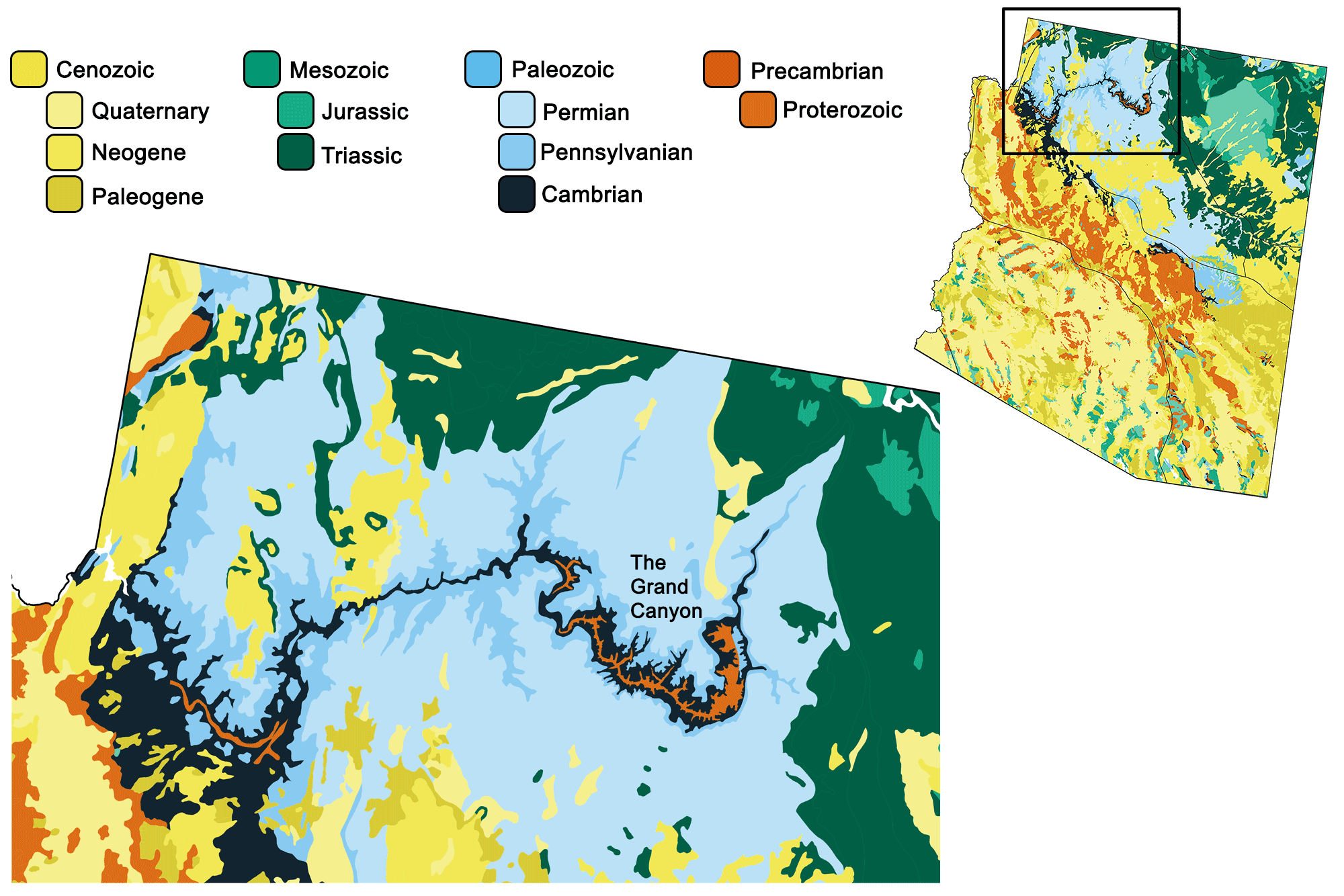 Geologic map of the Grand Canyon. Image by Jonathan R. Hendricks for the [email protected] project using QGIS and USGS data from Fenneman and Johnson (1946) and Horton et al. (2017) using the maximum age values for each mapped unit.

Cambrian strata of the Tonto Group comprise a sequence of tan, gray, and brown sandstone, mudstone, and limestone that represent an approaching shoreline (Tapeats Sandstone) and offshore mud layers (Bright Angel Shale, Muav Limestone). Late Devonian layers of gray and tan limestone are referred to as the Temple Butte Formation, and they were laid down in an environment similar to that of the modern Yucatan. Sea level rose from the Ordovician through Mississippian periods, and Mississippian rocks are widespread across much of Arizona and New Mexico, where they typically form prominent cliffs that dominate the landscape. Orogenic activity to the northwest (in what is now western Nevada) had little effect on Arizona’s clear, warm, shallow marine carbonate shelf. Here, the Mississippian Redwall Limestone is one of the most conspicuous rock layers, forming towering vertical cliffs in the Grand Canyon. 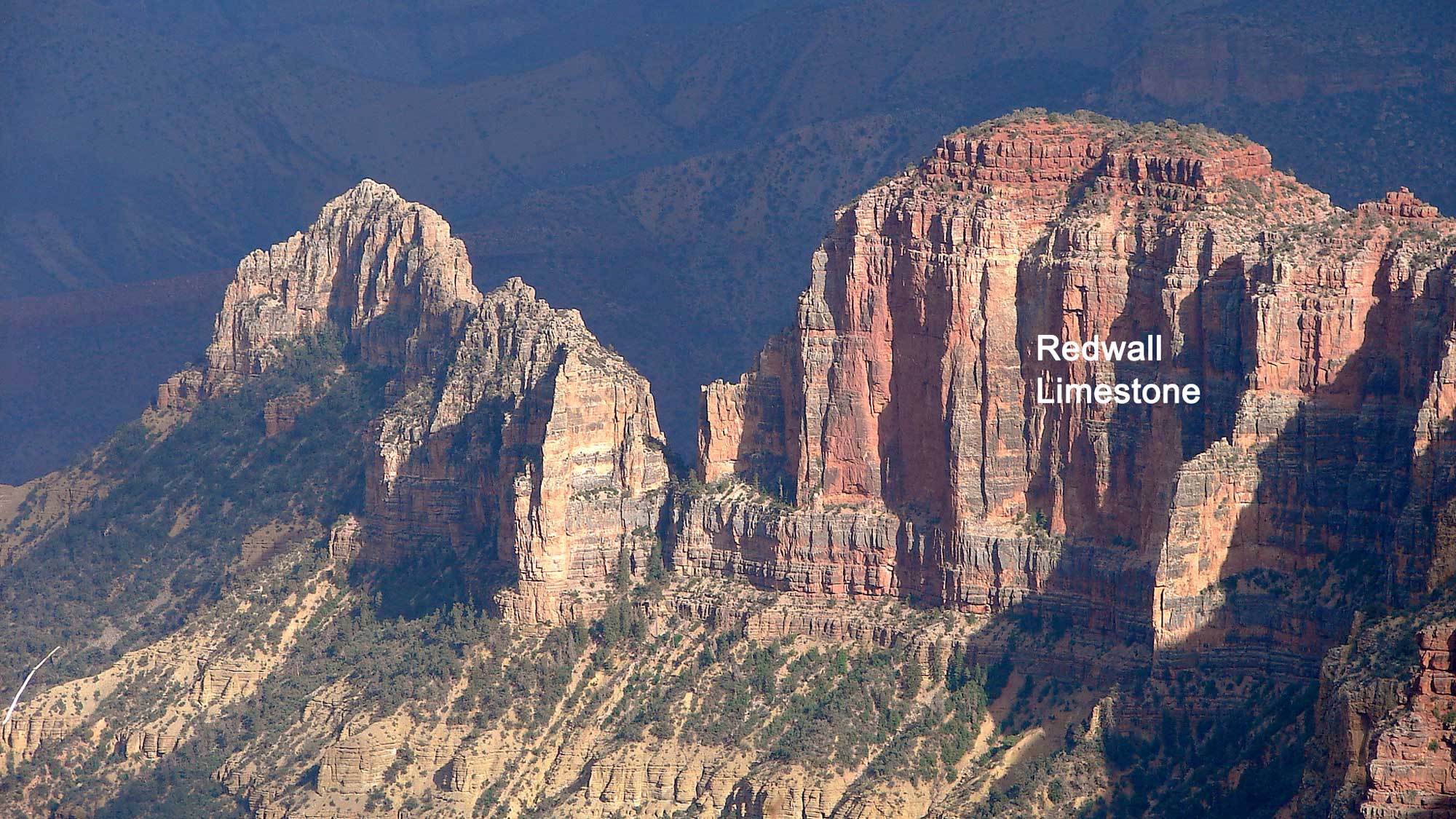 Although its name implies that the limestone is red, it is actually gray. The visible portions of the Redwall Limestone have been stained red from the erosion of iron-rich sediments in the overlying Supai Group and Hermit Formation, which have washed down across the limestone over time and been absorbed into its surface.

The Pennsylvanian and Permian periods—the last 70 million years of the Paleozoic Era—were marked by uplift and falling sea level across the Southwest, both of which led to the expansion of terrestrial environments. The Redwall Limestone was exposed to subaerial erosion, forming karst topography.

Streams carved valleys into the limestone, and estuarine deposits flooded the valleys as fills during subsequent transgressions. Uplifted areas shed large volumes of sediment, forming thick deposits in adjacent basins. The heavy influx of sand and mud resulted in preservation of these and other continental sediments as red beds (such as the Hermit Shale), colored by the oxidation of iron minerals. At this time, the region was near the equator, and an arid climate led to the widespread formation of sand dunes. Today, extensive coastal, windblown (aeolian) sand dune fields are preserved as thick beds of sandstone, with large-scale cross-bedding. The late Pennsylvanian Manakacha Formation, in the lower Supai Group, documents the earliest influx of aeolian sand onto what later became the Colorado Plateau.

Numerous types of Paleozoic fossils have been discovered in the Grand Canyon, ranging from marine invertebrates like trilobites, brachiopods, and corals to terrestrial plant fossils and vertebrate tracks.

Paleozoic fossils from the Grand Canyon and Colorado Plateau

Step 4: Uplift of the Colorado Plateau and Cutting of the Gorge

At the Grand Canyon, the Colorado River has incised through all of the area's Mesozoic and Paleozoic strata, reaching the Precambrian metamorphic and igneous basement rock. 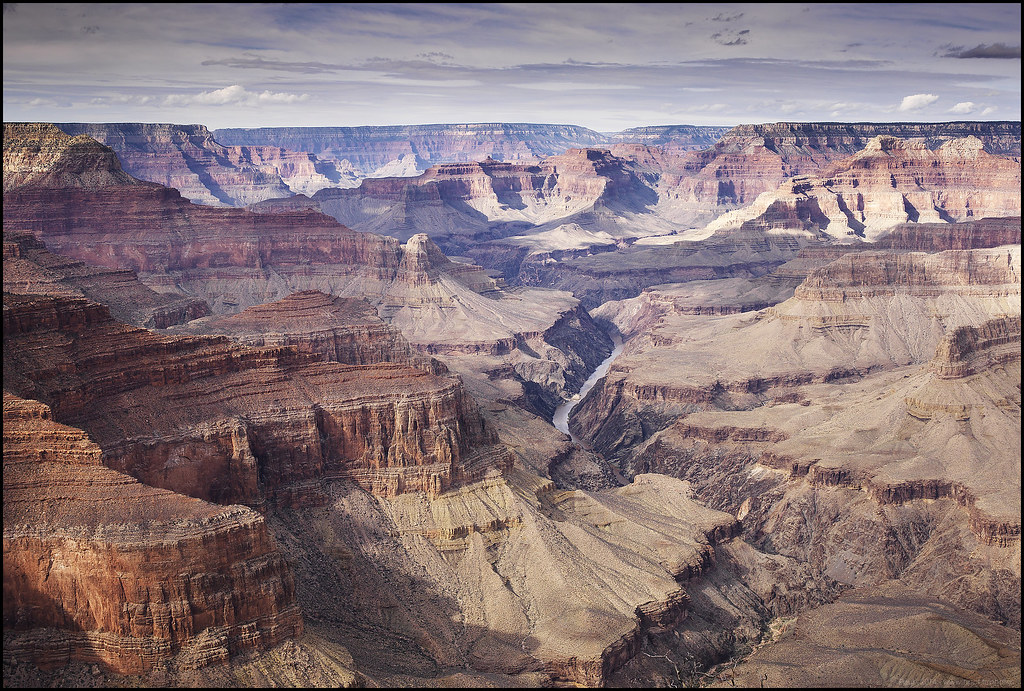 The river descends steeply through the Grand Canyon from Lees Ferry, at an elevation of 940 meters (3100 feet), to about 330 meters (1100 feet), where it flows into Lake Mead. This process has formed a canyon with dramatic topographic relief—the river's elevation is over a kilometer (nearly a mile) lower than the south rim of the canyon, and two kilometers (over a mile) lower than the north rim. An enormous array of tributary canyons is also visible from the canyon’s rims. These tributaries exhibit remnant mesas and chimneys, and a step-like erosional pattern of cliffs, flats, and steep piles of rock rubble, resulting from variations in the rock layers’ resistance to erosion. In contrast, in areas where the river has incised into the very hard Precambrian basement rock, the cross-section becomes V-shaped. V-shaped streambeds form in areas where rivers cut downwards into rock that is relatively uniform in resistance.

The rise of the Colorado Plateau is closely connected to the formation of the Grand Canyon. How and when this gigantic example of fluvial erosion occurred has remained hotly debated since geologist John Wesley Powell’s trip by boat through the canyon in 1867. Many generations of geologists have questioned whether the canyon is very old, dating back to or before the Laramide Orogeny, or is geologically relatively young. Much of the literature available in past years and in tourist guides speaks of "hundreds of millions of years" as the time it took to carve the canyon, but this is incorrect. In fact, major portions of the Grand Canyon were downcut in response to the region’s uplift, starting eight million years ago, in possible combination with a lower base elevation associated with Basin and Range crustal stretching.

The Colorado River does, however, have a complex ancestry that extends further back in time. Rivers have been running through the Grand Canyon area for the tens of millions of years it has been above sea level, and some initially carved their own canyons through normal erosional processes. One such canyon on the western side, Hurricane Canyon, may have been formed by a river that flowed northwest 70 to 50 million years ago; another on the eastern side may have formed approximately 25 to 15 million years ago. Segments of the Grand Canyon probably did develop to perhaps half their current depth during an early- and mid-Cenozoic time frame. The westernmost portion upstream from Lake Mead, and the northernmost segment, Marble Canyon, formed in just the past six million years. As these young river segments integrated with older ones, they formed the modern Colorado River that widened and deepened the Grand Canyon we know today.

The Uinkaret Volcanic Field, which includes numerous Quaternary basaltic cinder cones and flows, is located near and on the northern rim of the western Grand Canyon. The age of these flows, which began 1.2 million years ago, has provided key data for estimating the Grand Canyon’s incision rates during the past 100 to 600 thousand years. The most recent eruption in Uinkaret occurred approximately 1000 years ago; some of the basalt lava flows spilled into the gorge and temporarily dammed the Colorado River. 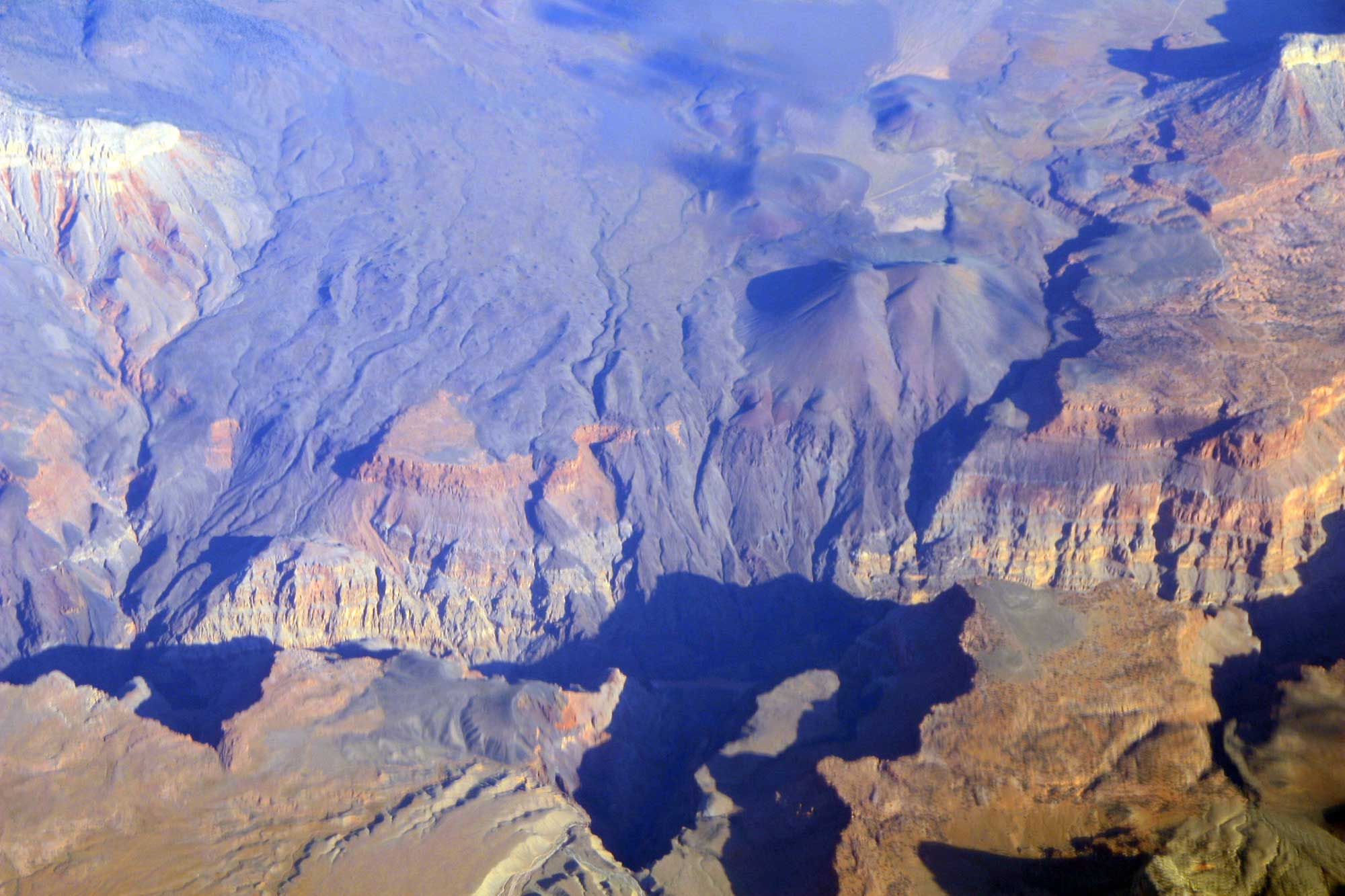 In this aerial view, the black basalt of the Uinkaret Volcanic Field is seen preserved where it cascaded over the side of the Grand Canyon at Lava Falls. Photograph by Doc Searls (Flickr; Creative Commons Attribution-ShareAlike 2.0 Generic license).