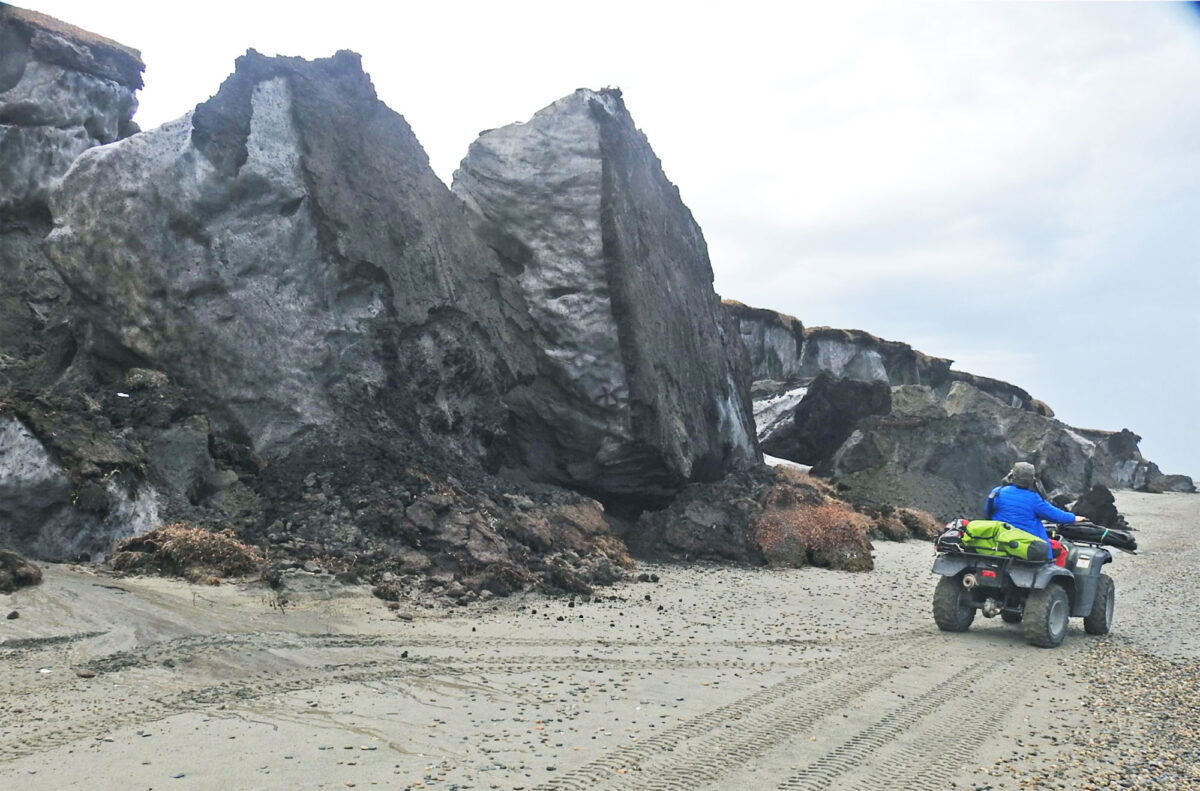 Page snapshot: Introduction to the climate of Alaska, including present, past, and future climate.

Credits: Most of the text of this page comes from "Climate of the Western US" by Ingrid H. H. Zabel, Judith T. Parrish, Alexandra Moore, and Gary Lewis, chapter 9 The Teacher-Friendly Guide to the Geology of the Western US, edited by Mark D. Lucas, Robert M. Ross, and Andrielle N. Swaby (published in 2014 by the Paleontological Research Institution; currently out of print). The book was adapted for the web by Elizabeth J. Hermsen, Jonathan R. Hendricks, and Ingrid Zabel in 2022. Changes include formatting and revisions to the text and images. Credits for individual images are given in figure captions.

Image above: Eroding permafrost bluffs on the coast of Barter Island, an island in the Beaufort Sea, northern Alaska. Source: USGS (public domain).

Because of its wide latitudinal range and the proximity of the Pacific Ocean, Alaska has a variety of climatic areas. These range from rainforests in the Alexander Archipelago to tundra in Alaska’s far north.

Köppen map of the Alaska. The inset shows the Near Islands, the Rat Islands, and the small Buldir Island that occurs between them in the westernmost Aleutian Islands (the island chain stretching to the west of mainland Alaska) The first letter of each zone in the key indicates its major classifcation. B = Arid, C = Temperate (warm temperate), D = Cold (continental), E = polar. Modified from a map by Adam Peterson (Wikimedia Commons, Creative Commons Attribution-ShareAlike 4.0 International license).

Alaska’s climate is influenced by its mountain ranges and its proximity to the ocean. Statewide averages range from a low of -20°C (-4°F) in January to a high of 11°C (52°F) in July. North of the Brooks Range, Alaska has a cold, dry, polar climate with frequent winter blizzards. Temperatures on the coast are moderated somewhat by the Arctic Ocean. Central Alaska has a dry continental climate, with a large variation between summer and winter temperatures. For example, the town of Takotna in Alaska’s interior has an average low temperature of -27°C (-17°F) in January and an average high of 22°C (72°F) in July. Heat records have been broken in recent years, such as when the city of Anchorage, AK reported a temperature of 90°F (32.2°C) on July 4, 2019, and a weather station on Kodiak Island recorded a temperature of 67°F (19.4°C) on December 26, 2021. 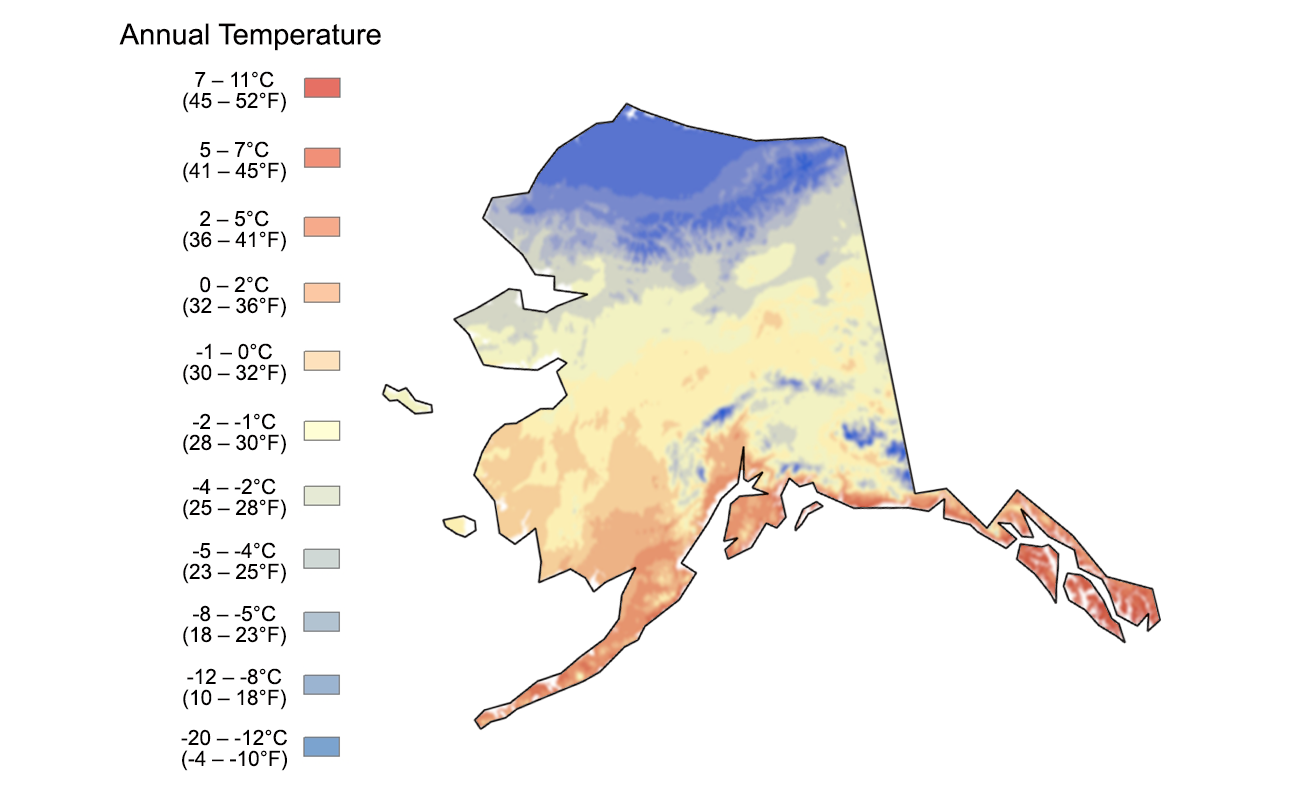 Mean annual temperature for Alaska. Image adapted from an image by Scenarios for Climate Assessment and Adaptation, first published in The Teacher-Friendly Guide to the Earth Science of the Western US. 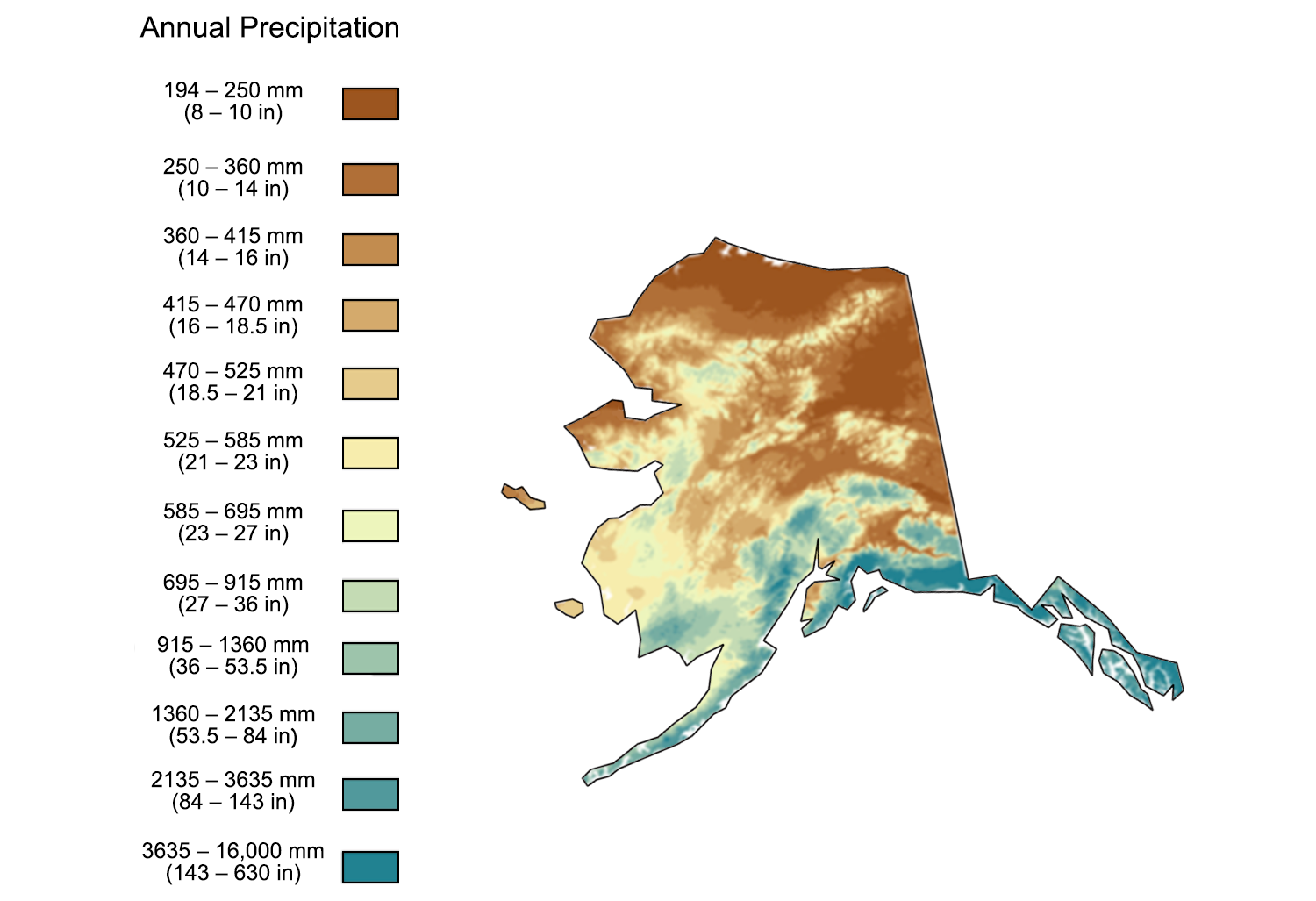 Mean annual precipitation for Alaska. Image adapted from an image by Scenarios for Climate Assessment and Adaptation, first published in The Teacher-Friendly Guide to the Earth Science of the Western US. 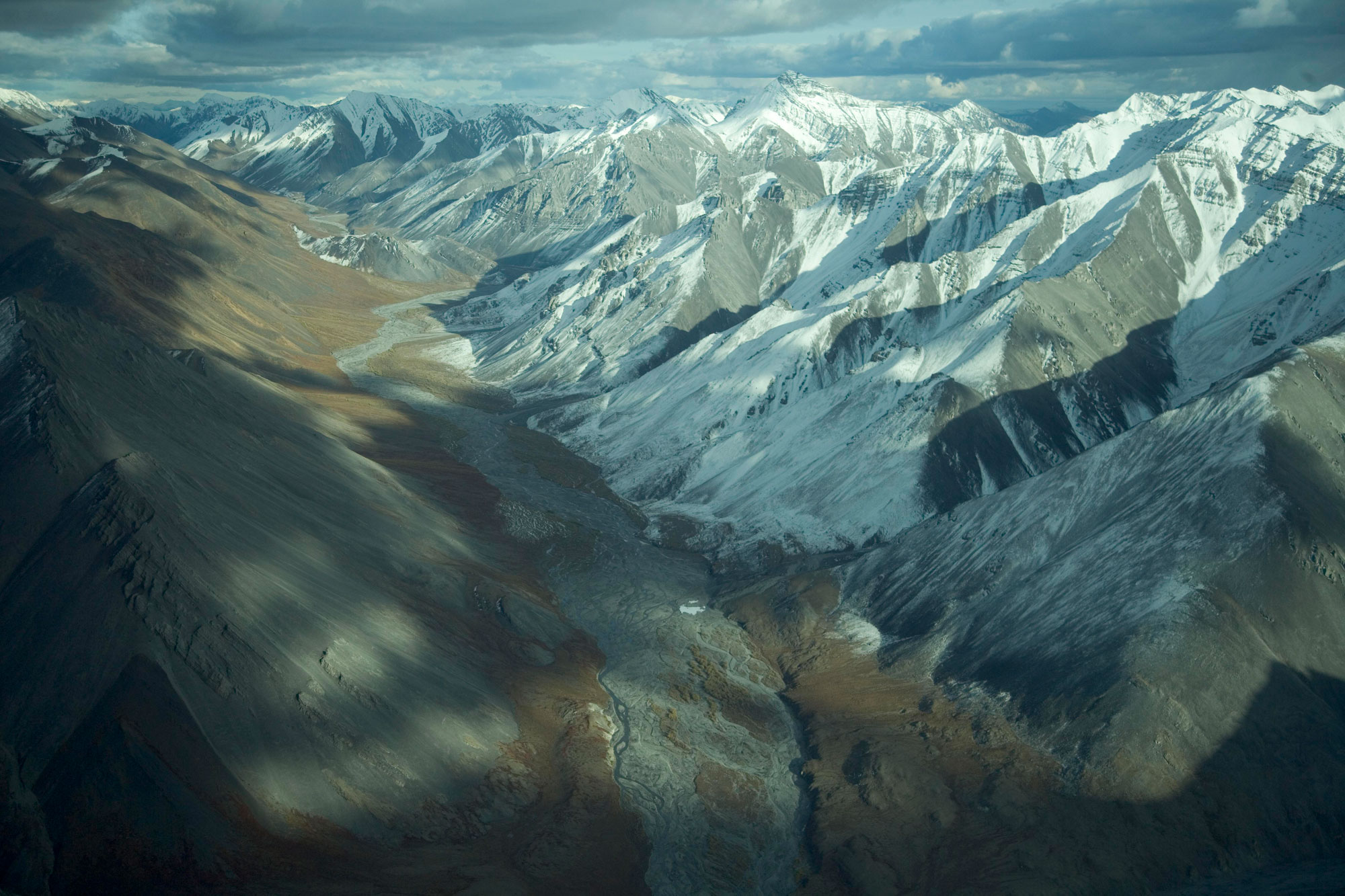 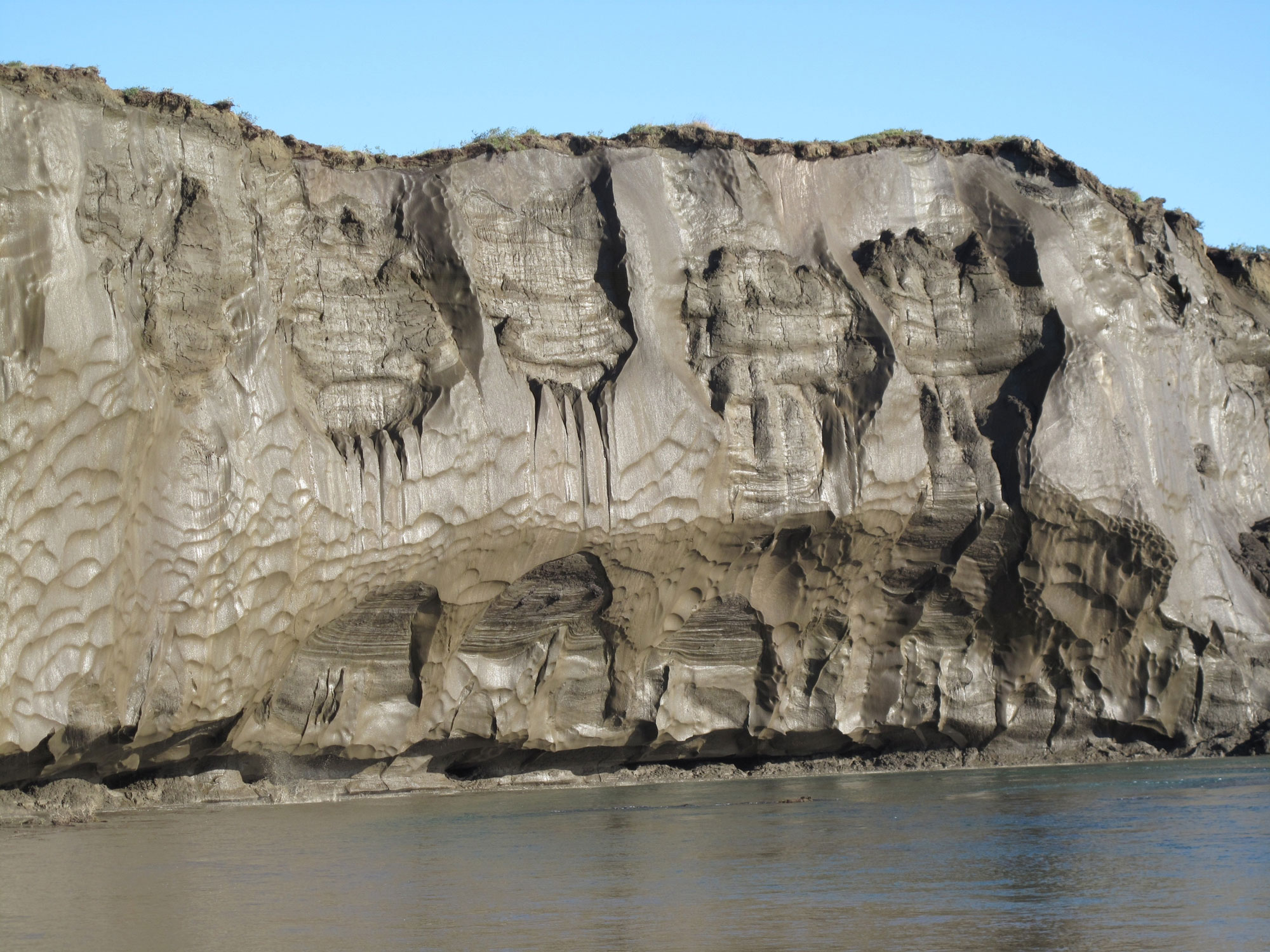 Another climate area exists in the Alaskan southeast, south coast, and southwestern islands, and in west-central Alaska in the summer. These areas have moderate temperatures and high precipitation; average annual temperature is about 7°C (45°F). Some areas are home to lush rainforests and receive around 500 centimeters (200 inches) of rain a year.

The climate in west-central Alaska is influenced by a phenomenon that is unique in the United States: the seasonal presence of sea ice. In the winter when sea ice covers the Bering Sea, this area loses the moderating effect of open water and has a continental climate. When the sea ice melts in summer, the climate returns to a warmer, more humid maritime state. 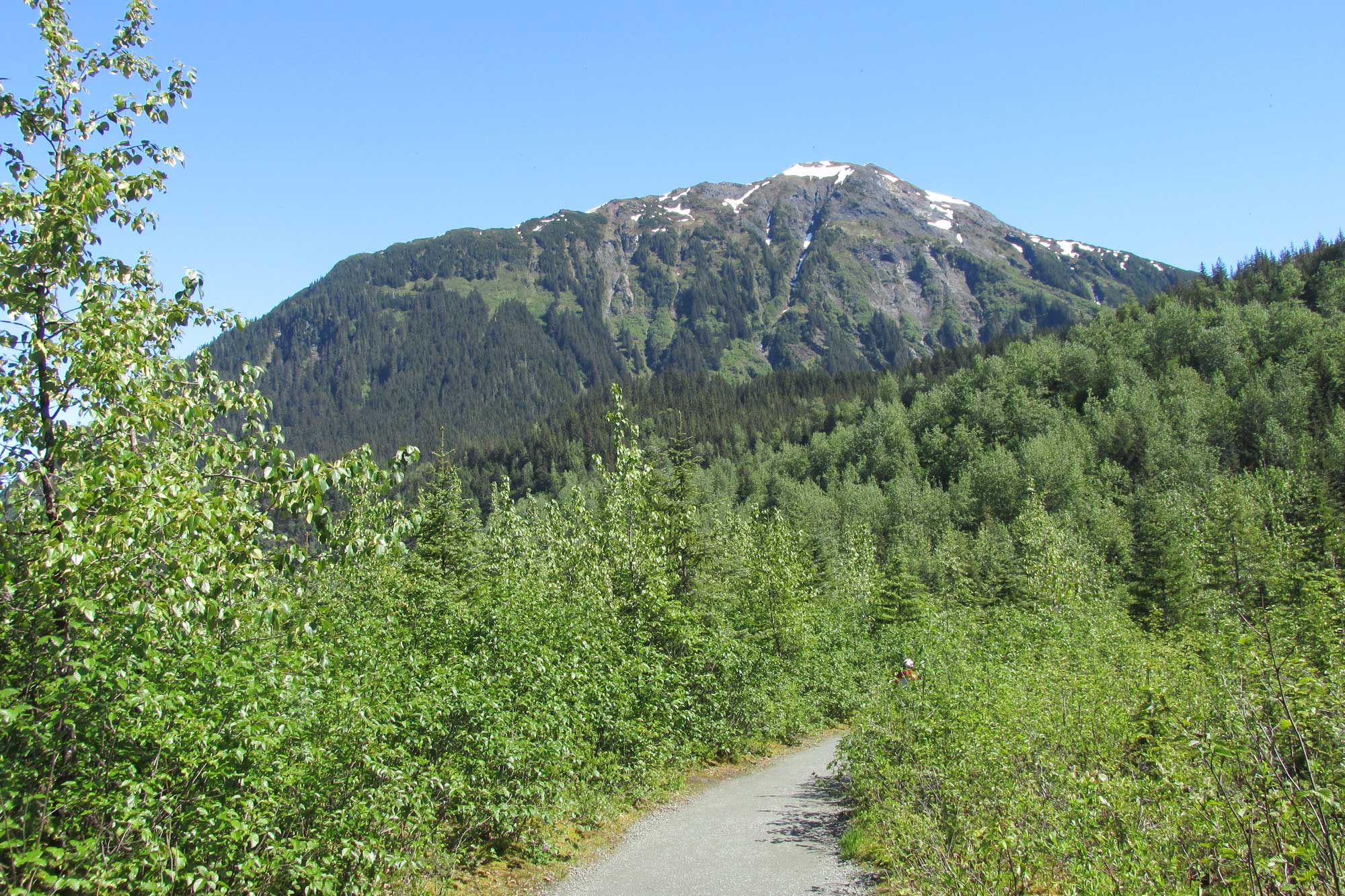 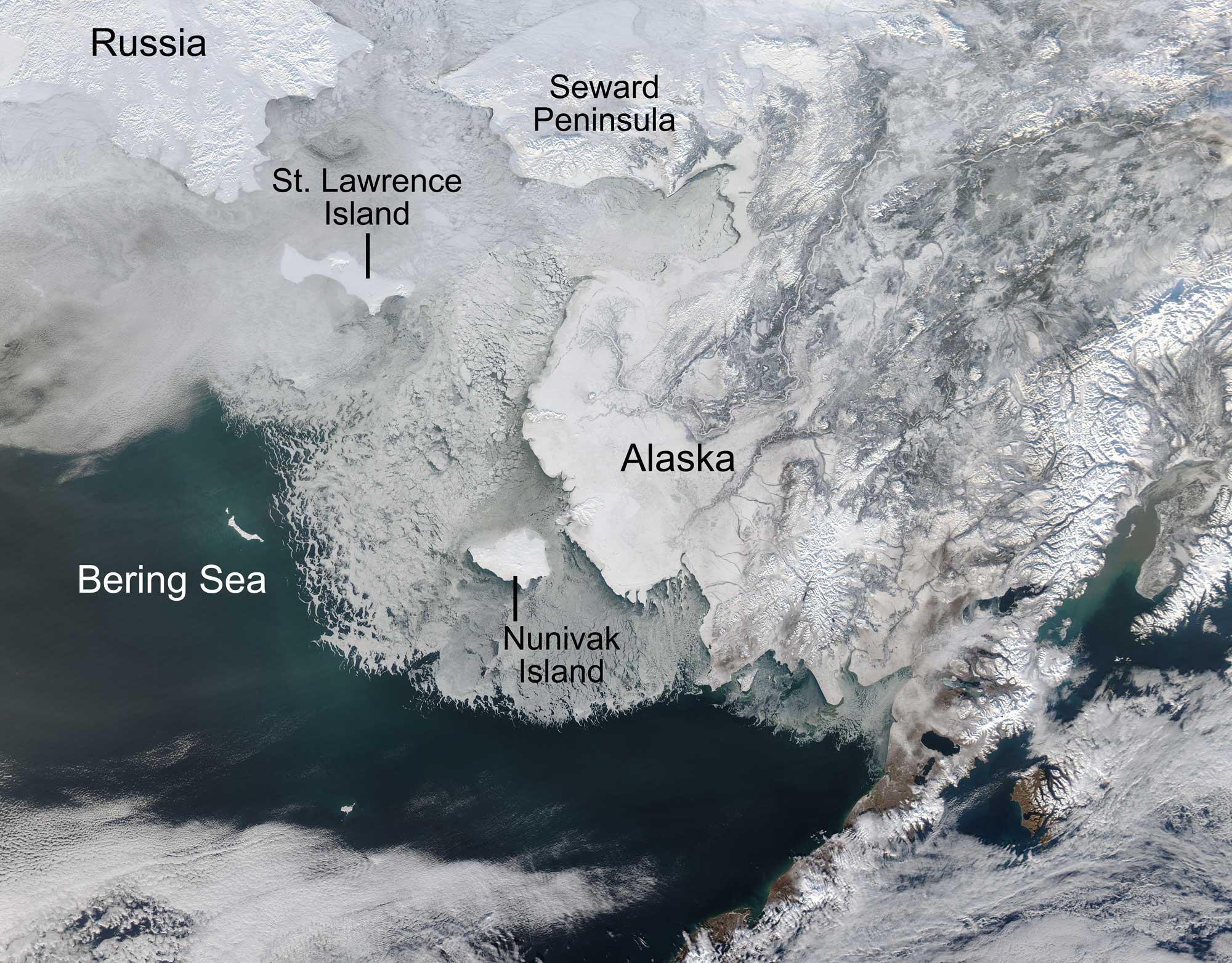 Past climate of Alaska

Alaska is almost entirely composed of ancient terranes and volcanic island arcs that drifted together at different times during Earth’s history and had not assembled into anything resembling modern Alaska until the Jurassic. Most of these terranes appear to have experienced warm, wet climates, and geologists have concluded that they all originated in tropical areas of what is now the Pacific Ocean.

Alaska’s Cambrian- through Silurian-age rocks all formed on these tropical microcontinents. Devonian rocks are common in northern Alaska. These rocks include carbonate platforms, which are consistent with a low-latitude position and warm climate. Carboniferous and Permian rocks in Alaska originated on tropical terranes. Some contain lush, tropical floras that are completely dissimilar to those on the main part of the continent, a testament to their continued isolation in the ocean far from the North America, which had now become part of the supercontinent Pangaea. Carboniferous rocks in northern Alaska contain extensive carbonate platforms, which are indicative of a warm climate. Alaska’s Permian rocks are also indicative of a marine environment. 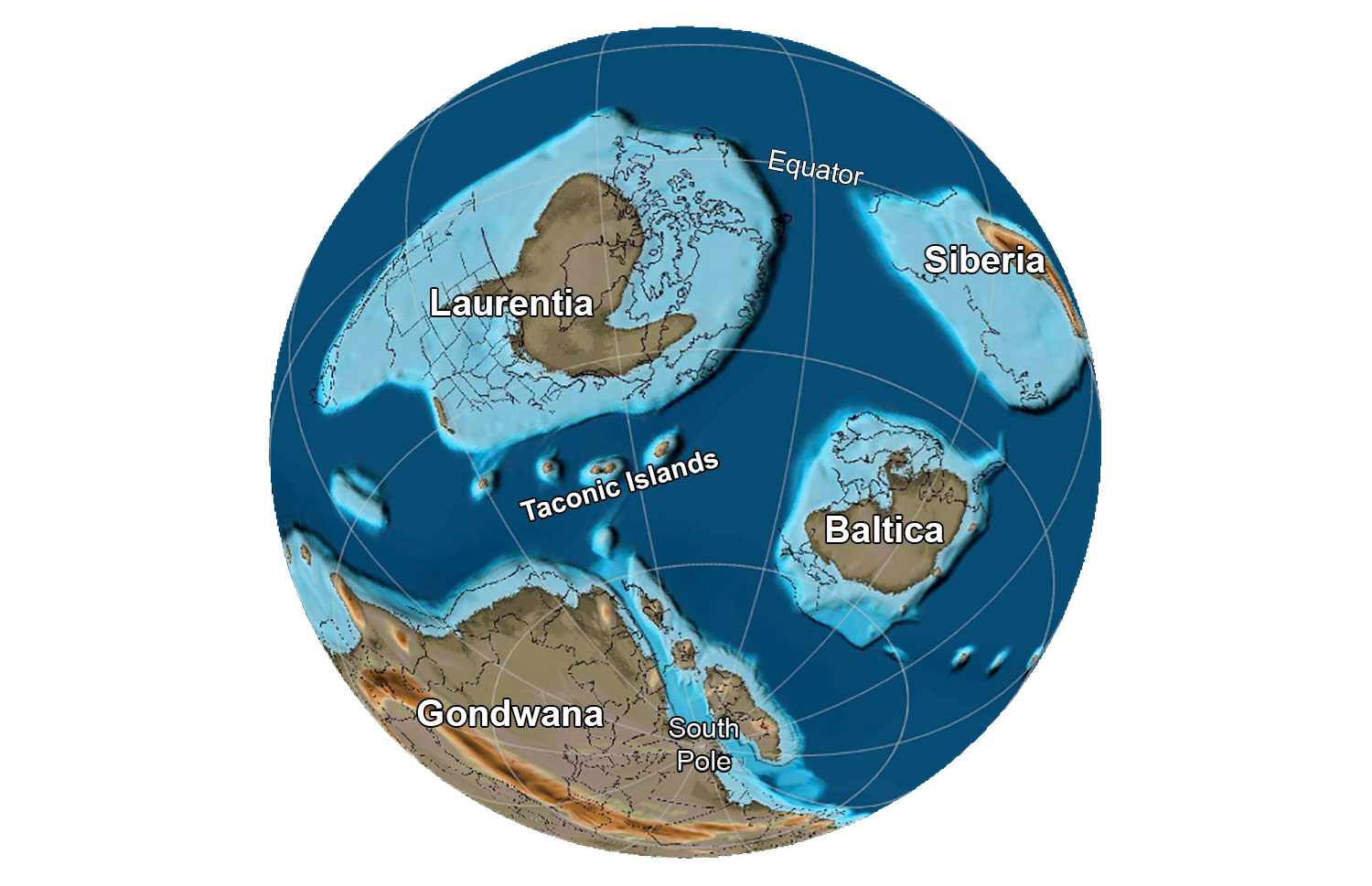 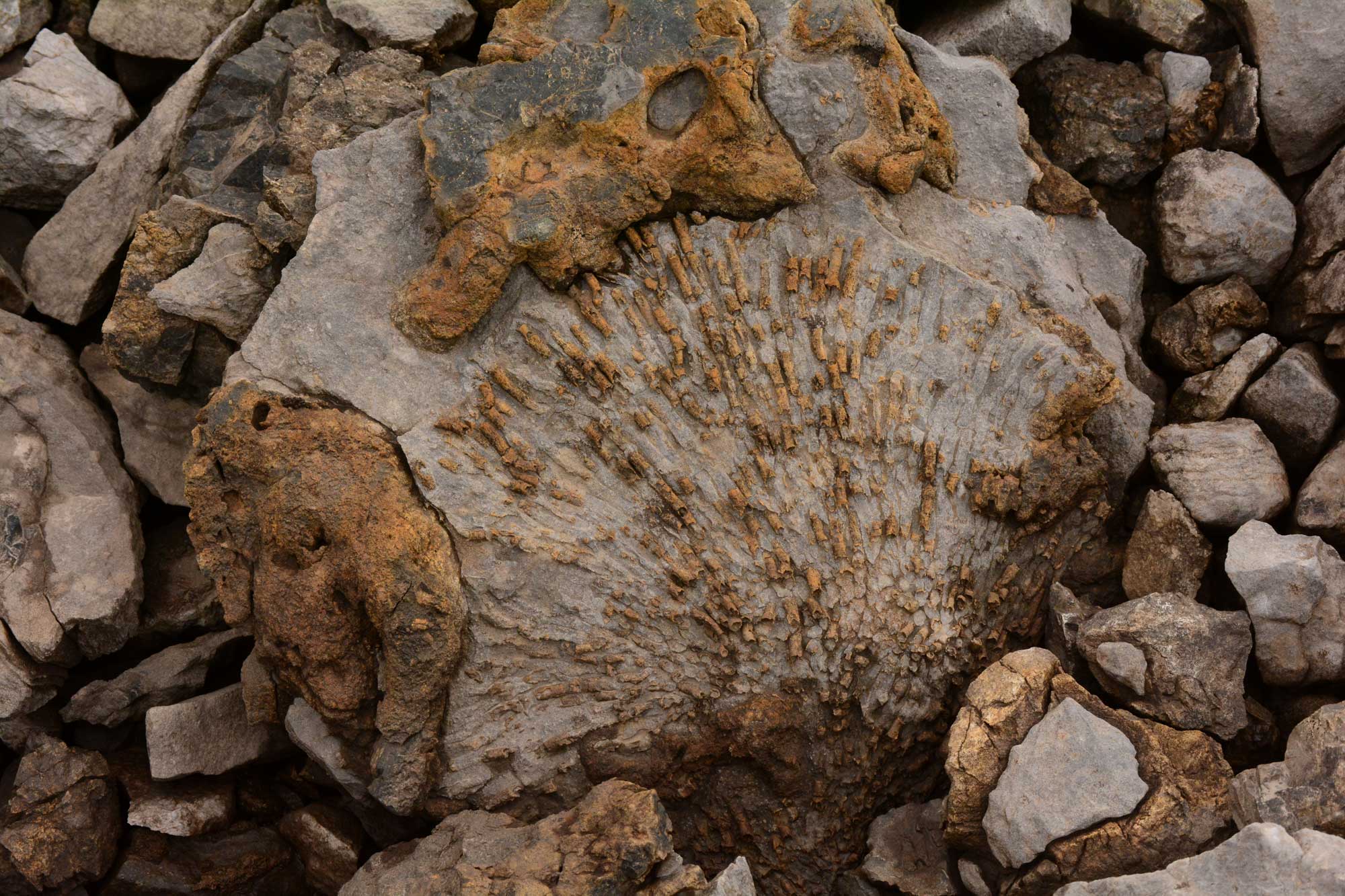 In the Triassic, around 220 million years ago, Pangaea, a supercontinent composed of nearly all the landmass on Earth, began breaking up into continents that would drift toward their modern-day positions. Island arcs formed close to what is now southern Alaska, where a very productive sea flooded the Triassic continental margin. Much of southern Alaska was assembled during the Jurassic as a series of island arcs and terranes collided with northern Alaska, which had now drifted into its current position and existed as a broad, flat shelf of shallow marine rocks. The Earth remained warm until worldwide temperatures began to dip again during the Late Jurassic, around 150 million years ago. 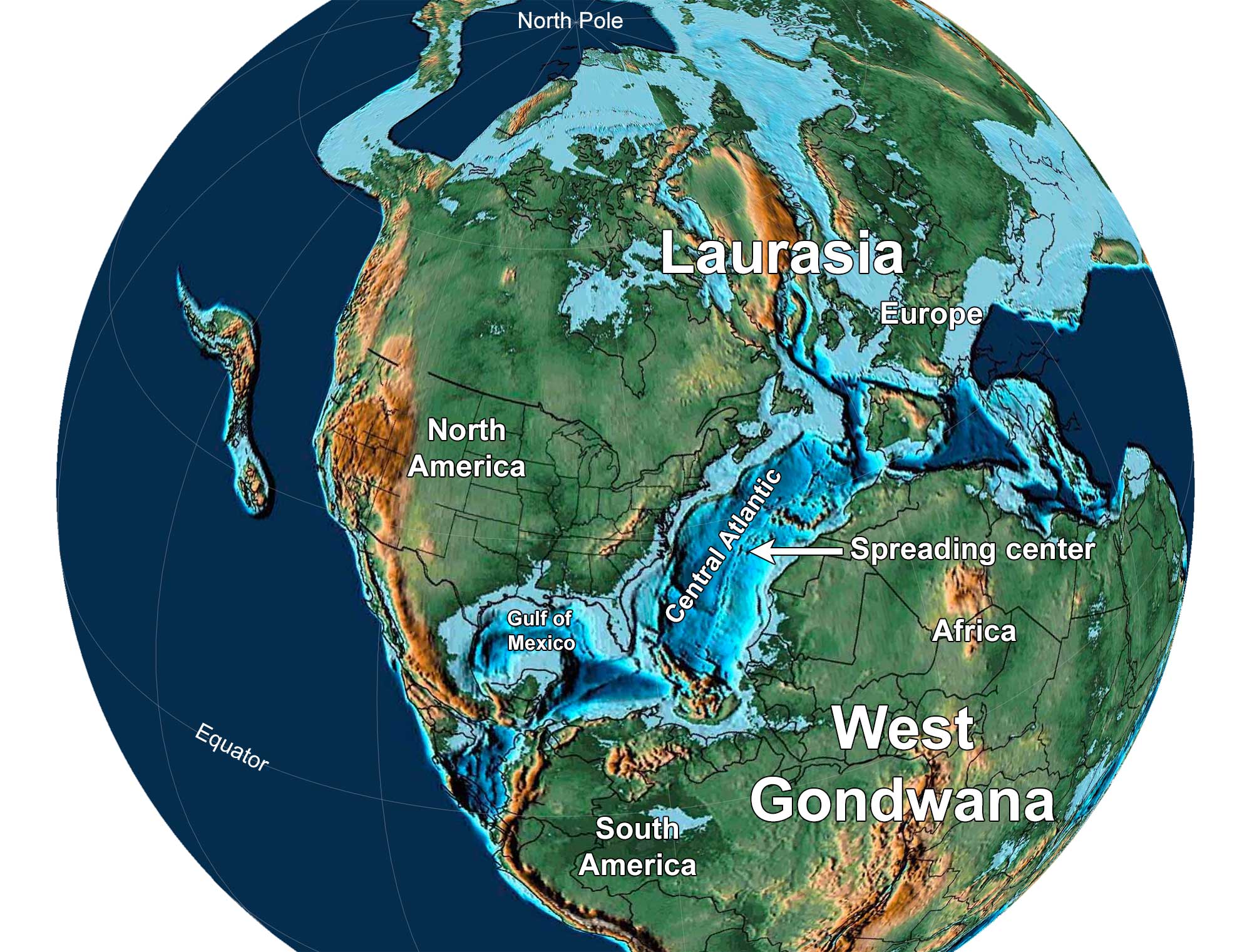 Earth 150 million years ago, near the end of the Jurassic Period. North America and Europe are part of Laurasia, and South America and Africa are part of Gondwana. Notice that North America has separated from Africa and there is a spreading center in the Central Atlantic Ocean. Reconstruction created using Paleomap (by C. Scotese) for GPlates. Reconstruction created using basemap from the PALEOMAP PaleoAtlas for GPlates and the PaleoData Plotter Program, PALEOMAP Project by C. R. Scotese (2016); map annotations by Jonathan R. Hendricks and Elizabeth J. Hermsen for PRI's [email protected] project (CC BY-NC-SA 4.0 license).

As a result of displacement due to continental rifting and seafloor spreading, sea level throughout the Cretaceous was much higher than it is today. Global temperatures during the Cretaceous were very warm, as much as 10°C (18°F) above those at present. There was likely little or no glacial ice anywhere on Earth, and temperatures were highest in lower latitudes. Shallow seaways spread over many of the continents, including South America, Africa, Eurasia, and North America.

The Earth warmed near the beginning of the Cretaceous, and sea level rose. Even though Alaska was closer to the North Pole than it is at present, fossil vegetation indicates that its climate was very similar to that of western Oregon today. Lush swamps and forests occupied lowland areas; some of these swamps have become rich coal beds. The climate cooled again at the end of the Cretaceous, 65 million years ago. This cooling had the greatest impact on northern Alaska, where fossilized forests resemble those found near Anchorage today. 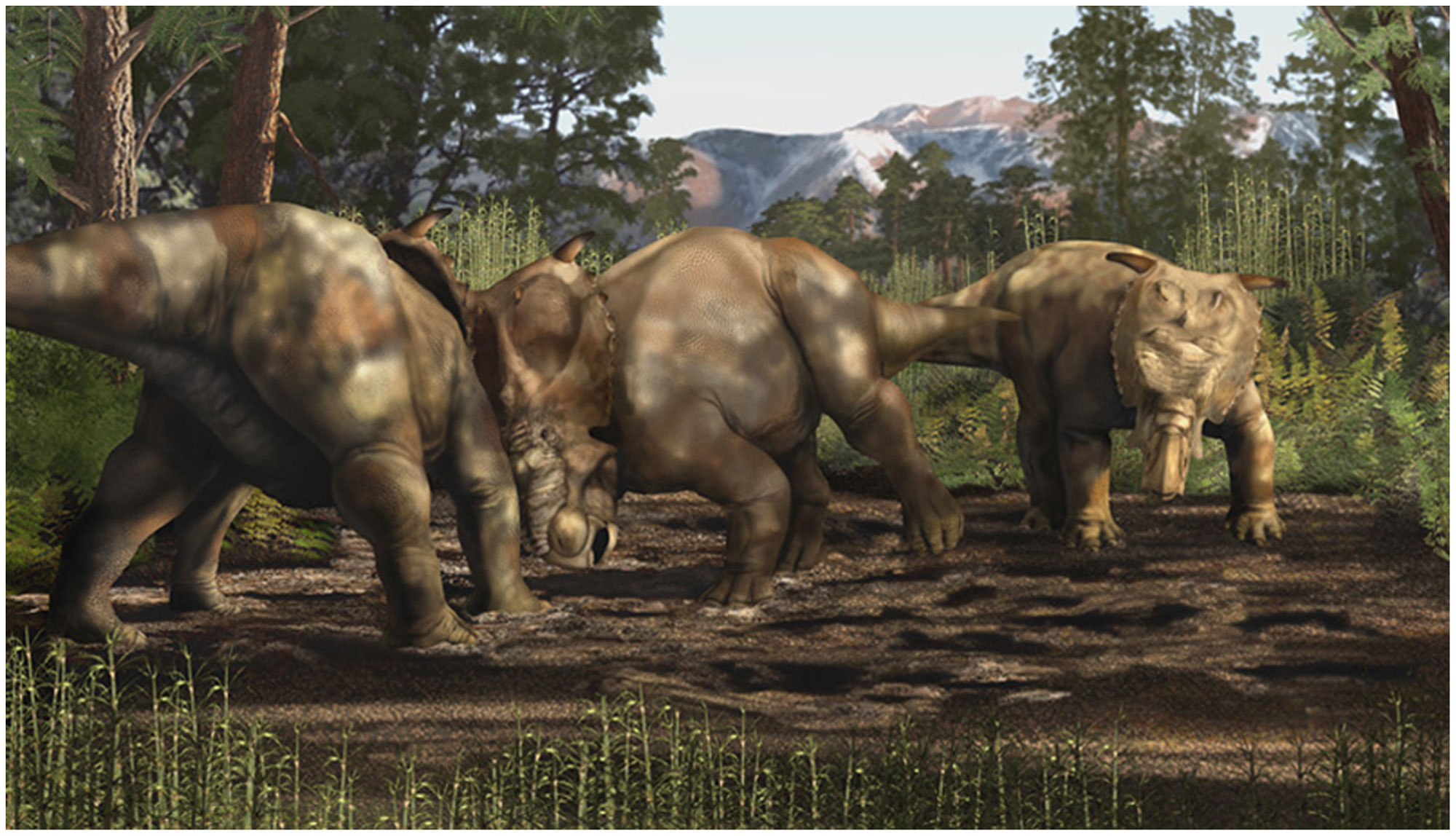 Cenozoic (66 million years ago to present)

Paleogene to Neogene (66 to 2.6 million years ago)

In the early Paleogene, the climate warmed once more. By around 50 million years ago, palm trees were growing in southern Alaska and the Alexander Archipelago. Alaska’s northern forests once again grew to resemble those of modern forests much farther south. Between 35 and 20 million years ago, however, the climate became cooler and drier, and deciduous trees such as oak, maple, and alder flourished.

Quaternary (2.6 million years ago to present)

Eventually, a sheet of sea ice formed over the Arctic, and ice sheets spread over northern Asia, Europe, and North America, signaling the start of the most recent ice age. Since 800,000 years ago, an equilibrium has been reached between warming and cooling, with the ice caps growing and retreating primarily due to the influence of astronomical forces (i.e., the combined gravitational effects of the Earth, Sun, moon, and planets).

During the last glacial maximum, ice reached as far south as the northern part of Washington State on the West Coast of North America. While ice covered some of Alaska, the ice sheet did not extend into central or northern Alaska because the local climate was very dry. However, an ice cap covered the Brooks Range. During periods of ice advance, Alaska was colder than it is today, with extensive mountain glaciers occurring throughout the state.

As in other parts of North America, Pleistocene megafauna roamed Alaska. The most iconic of these animals may have been the woolly mammoth (Mammuthus primigenius). The last woolly mammoths in Alaska (and in the United States) lived on St. Paul Island, a remote volcanic island located to the southwest of mainland Alaska; they survived there until about 5600 years ago. 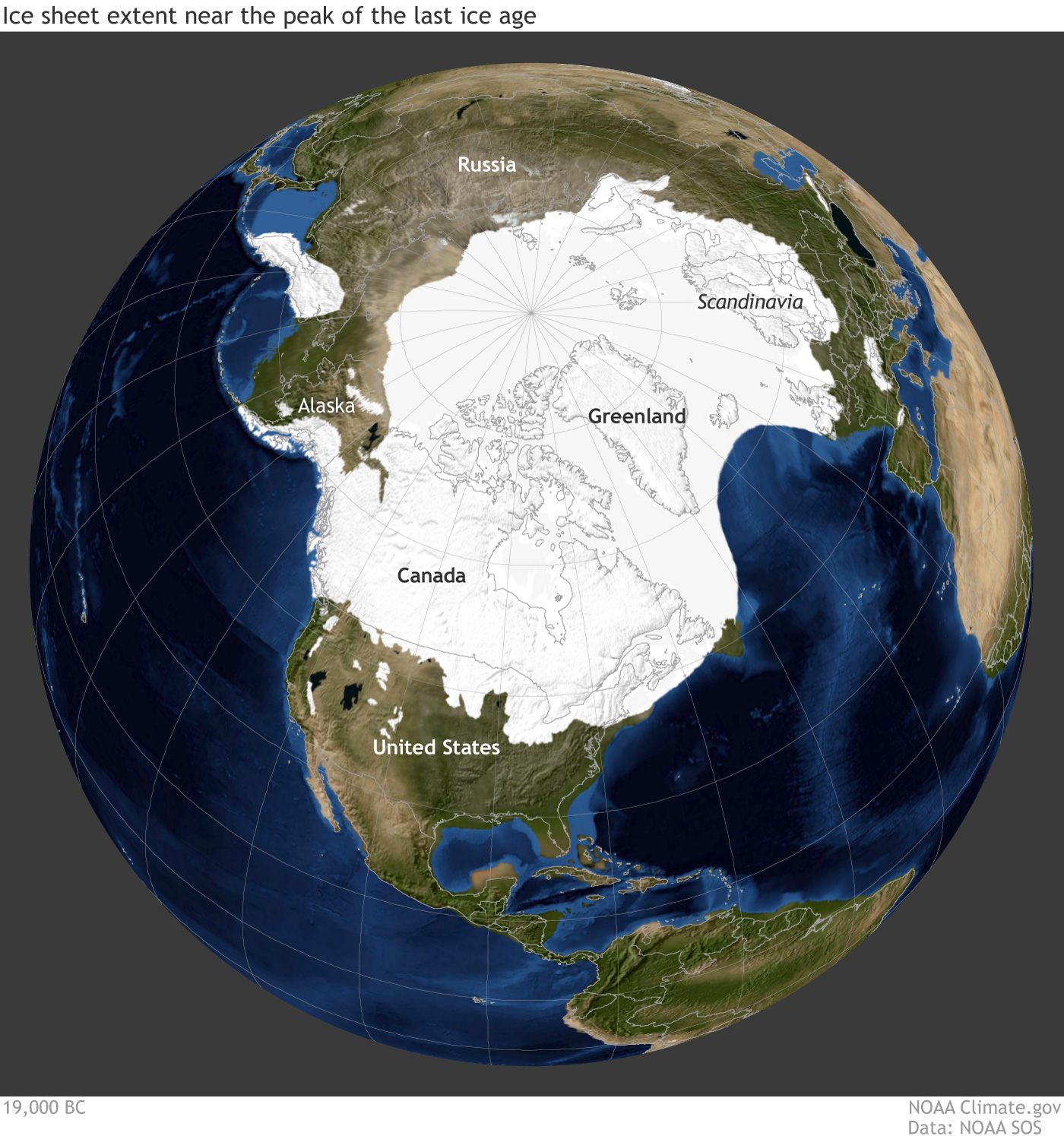 Earth during the last glacial maximum, around 20,000 years ago in the Pleistocene epoch. Much of North America was covered with a large sheet of glacial ice and the coastlines were different because sea level was lower. Reconstruction from climate.gov based on data from the University of Zurich Applied Sciences. 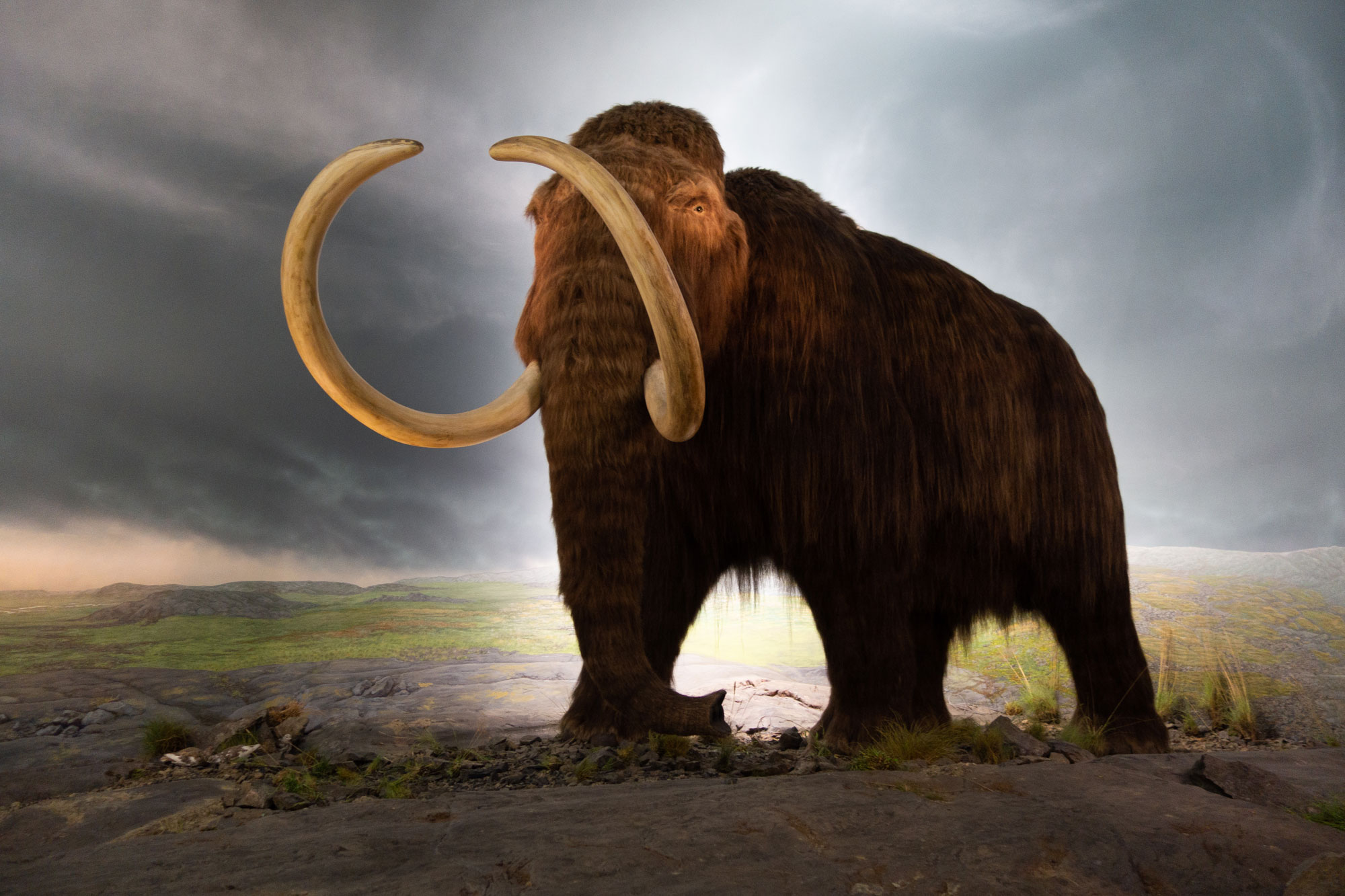 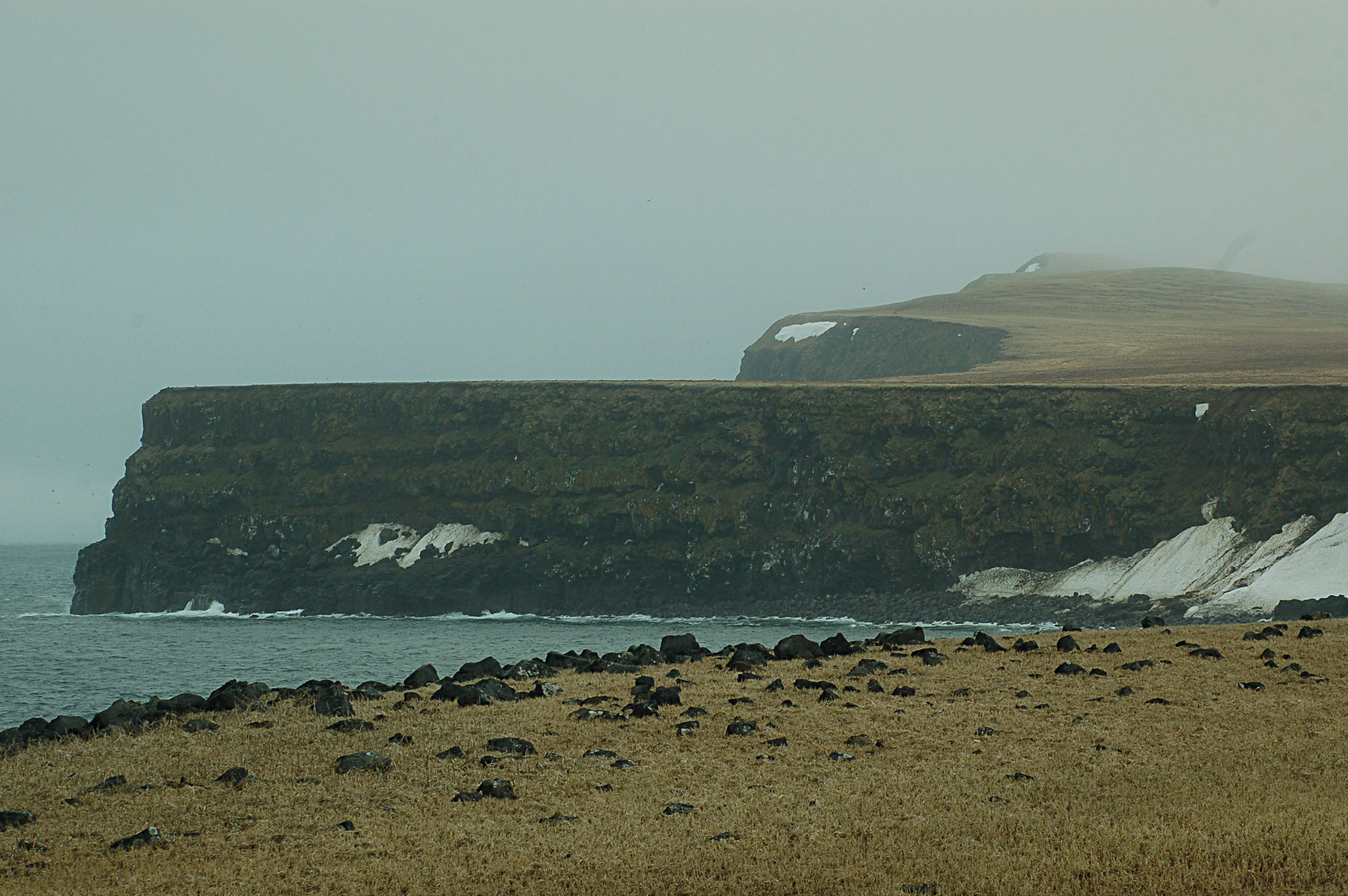 Alaska contributes significantly to climate change. The population of any industrialized and particularly wealthy country produces pollution. The more than 700,000 residents of Alaska use electricity, transportation, and products that come from carbon-rich fossil fuels. Burning fossil fuels releases carbon into the atmosphere, which warms the Earth. 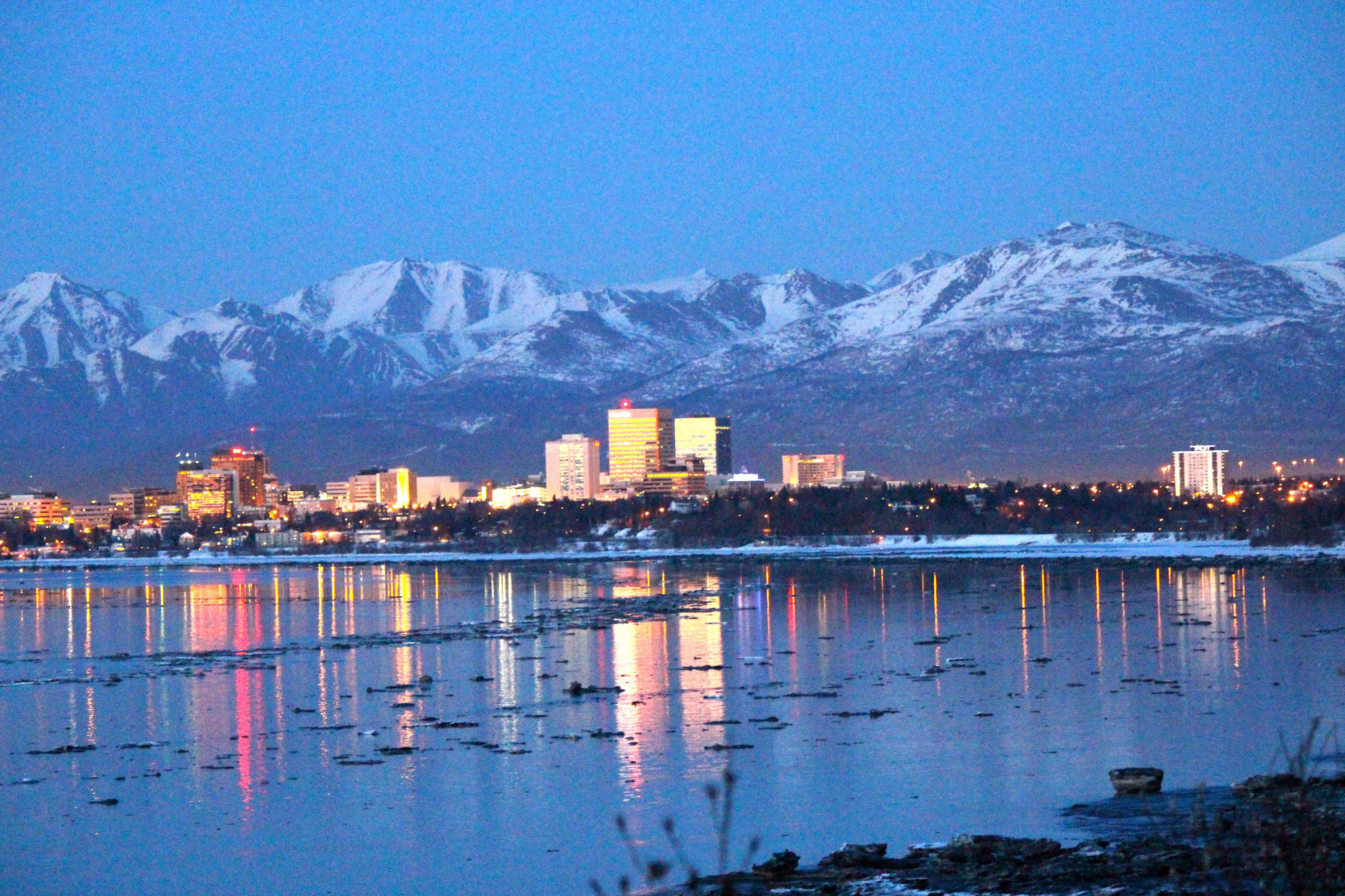 Statewide average temperatures in Alaska have increased, with winter temperatures increasing the most: up 3.2°C (5.8°F) from 1949 to 2011. Temperatures are expected to rise rapidly, by 2° to 4°C (3.5° to 7°F) by the middle of the 21st century. These increased temperatures lead to a whole host of other effects, including drier soils from more evaporation, the increased likelihood of drought and fires, and more rain (rather than snow) in the winter.

Climate models project that Alaska will receive more precipitation, but that soils will actually become drier due to increased evaporation from warmer air temperatures. Summers are expected to support a longer growing season, and also to see more drought and wildfires. Invasive insects that damage Alaskan trees will be better able to survive warmer winters and will therefore increase and spread.

Sea ice will cover the ocean for shorter portions of the year, possibly changing the distribution of plankton blooms, a part of the marine food chain upon which Alaska’s fisheries depend. Alaskan permafrost is melting, leading to dramatic changes in the coastline and landscape. In some areas, the melting permafrost and accompanying erosion have destroyed buildings and roads. Melting permafrost also releases carbon dioxide and methane when the organic material in it begins to decay, and these greenhouse gases contribute to additional warming. 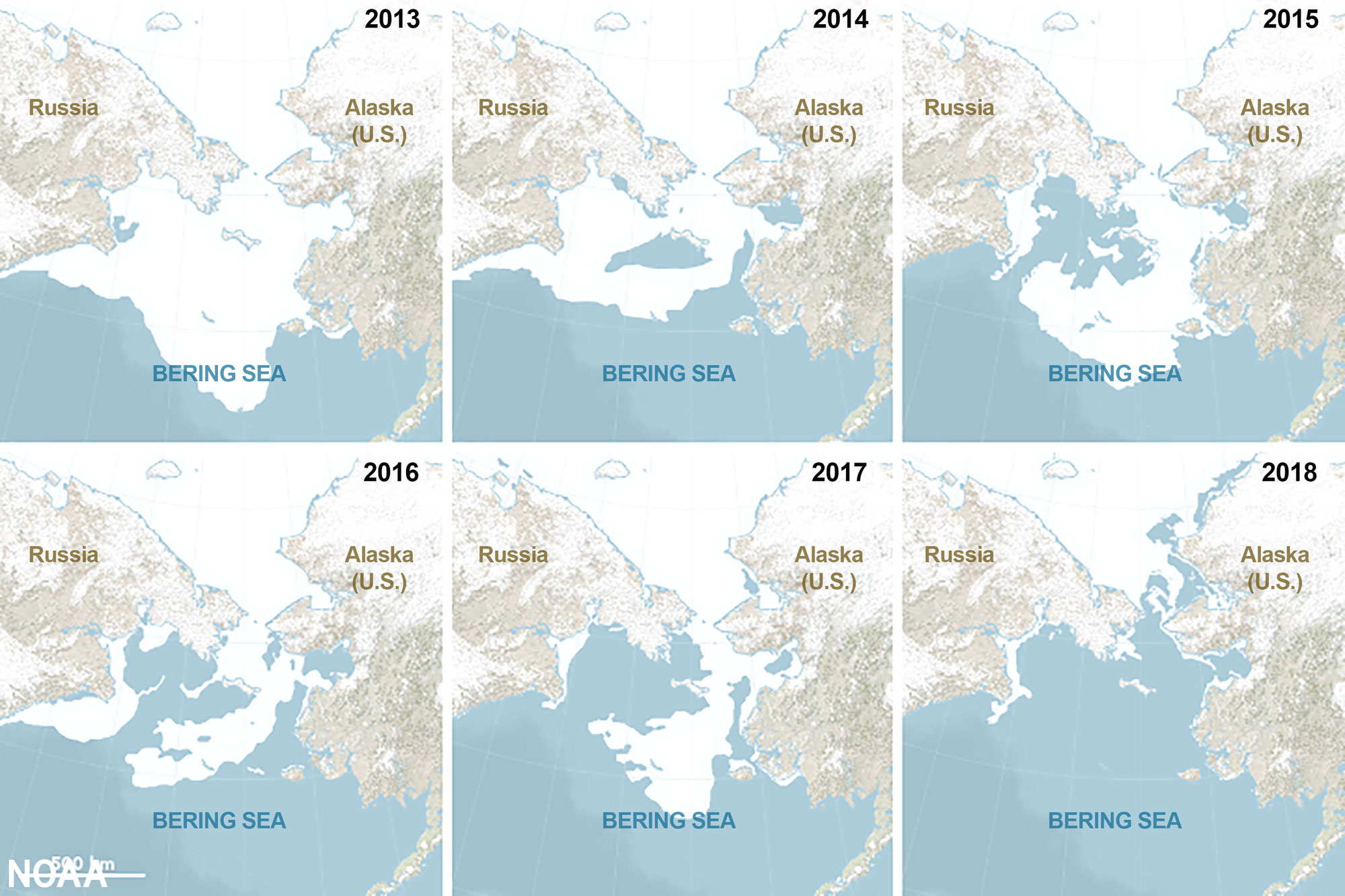 Illustrations showing the maximum extent of sea ice on the Bearing Sea from 2013 to 2018. As the climate warms, the extent of ice on the Bering Sea has been shrinking. Illustration by Joshua Stevens, NASA Earth Observatory (Source: NOAA). 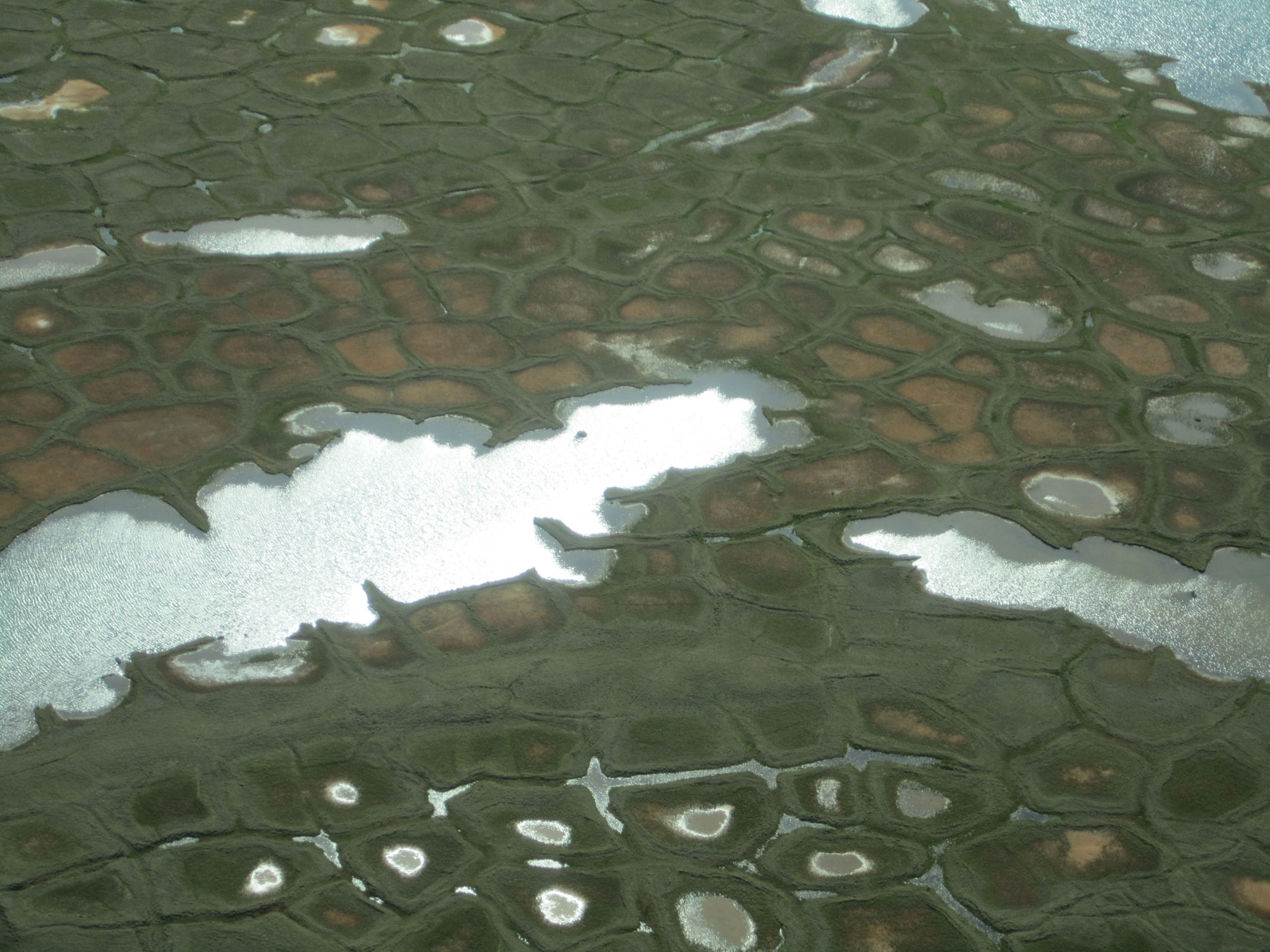 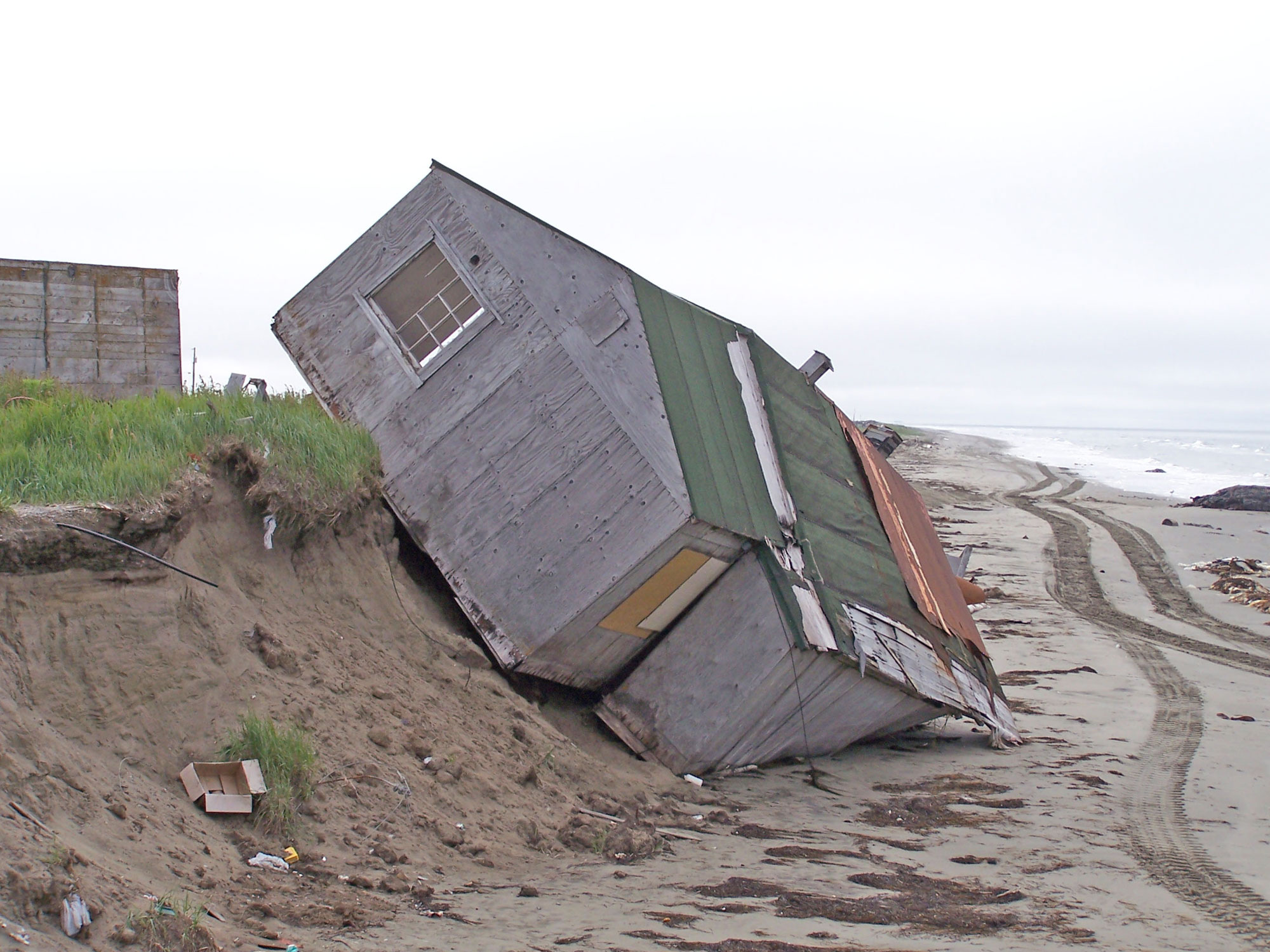 Digital Encyclopedia of Earth Science: What is climate?: https://earthathome.org/de/what-is-climate/